Menu
Install the app
You are using an out of date browser. It may not display this or other websites correctly.
You should upgrade or use an alternative browser.
Crusader Kings II 69321 Bug Reports 19619 User Modifications 10424 Suggestions 5829 Tech Support 6285 After Action Reports
Show only dev responses

Welcome to another Dev Diary! Today we are going to take a look at some of the Muslim rulers you can find in the Iron Century bookmark. (And like yesterday, keep in mind several of these rulers have randomized traits/stats) 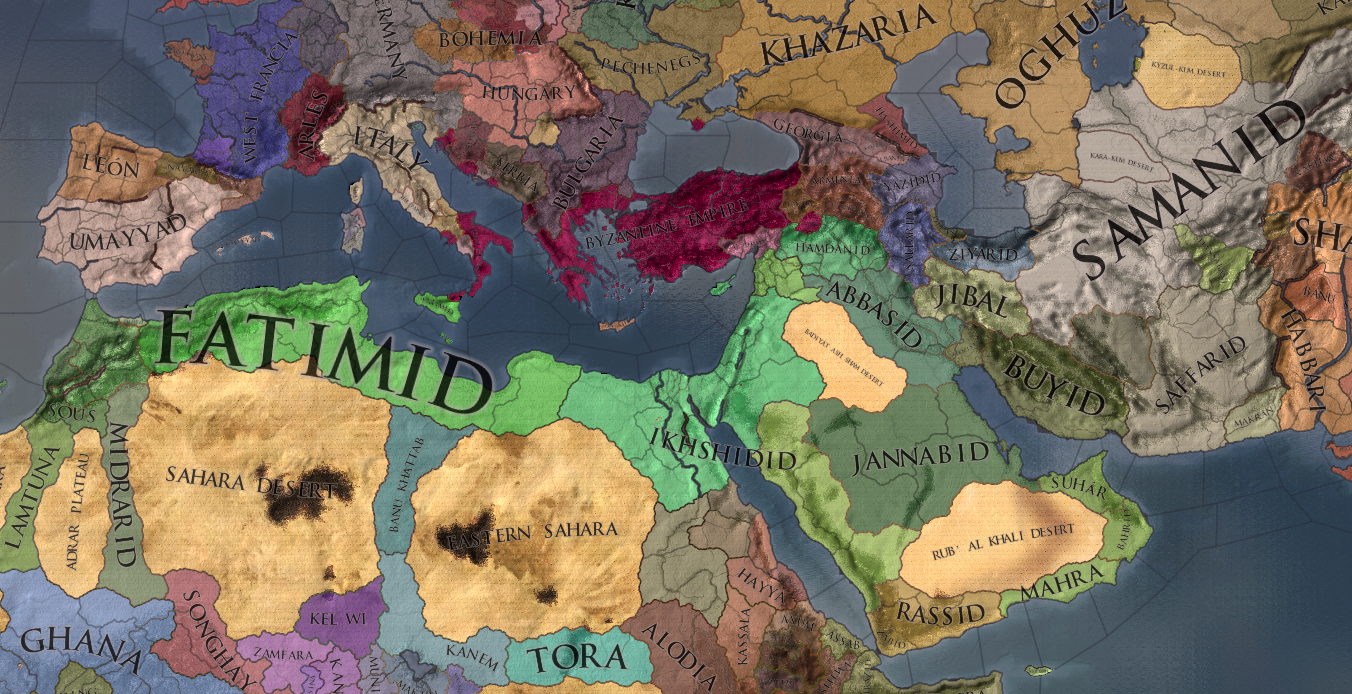 A look at the Muslim world at large.

al-Ikhshid of the Ikhshidid Dynasty: In our bookmark, Al-Ikhshid has recently been granted the governorship of Egypt. Though he wasn’t really supposed to have his title until the year 938, we chose to call him Al-Ikhshid as his dynasty is known as the Ikhshidid dynasty, and that is what he is generally known as. Functionally speaking, he is set up as a Sunni Sultan holding Egypt and huge parts of Syria, with tributaries to his north, south-east and south. He is bordering the Fatimids in the west, and the Jannabid Qarmatians to the east. In many ways, Al-Ikhshid and his dynasty is one of the powerhouses in the bookmark, and will most likely play an important role.

Historically speaking the Ikhshidid dynasty held Egypt for about 35 years, until they were invaded by the Fatimids who made it the capital of their newly founded Caliphate. 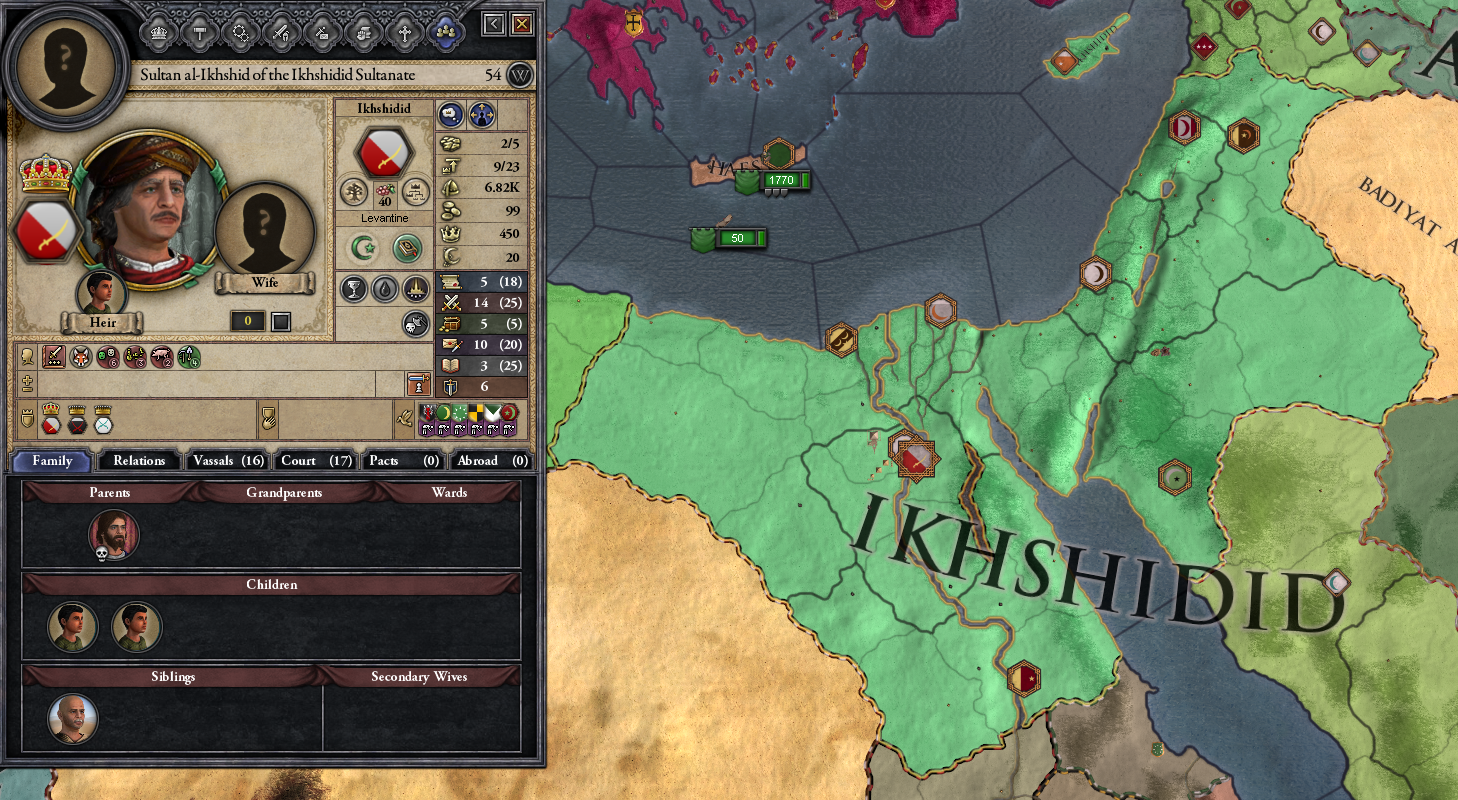 Caliph Ar-Radi of the Abbasid Caliphate: In our two earliest bookmarks (769 and 867), the Abbasid Caliphate is an impenetrable powerhouse, but in 936 they have fallen apart to infighting and lost almost all their importance. As they are barely holding on to their old core lands around Baghdad, they are surrounded by threats who want to take control of the Caliphate and its lands. Ar-Radi is often seen as the last of the real Caliphs, but even his rule was cut short at the age of 31 in the year 940. 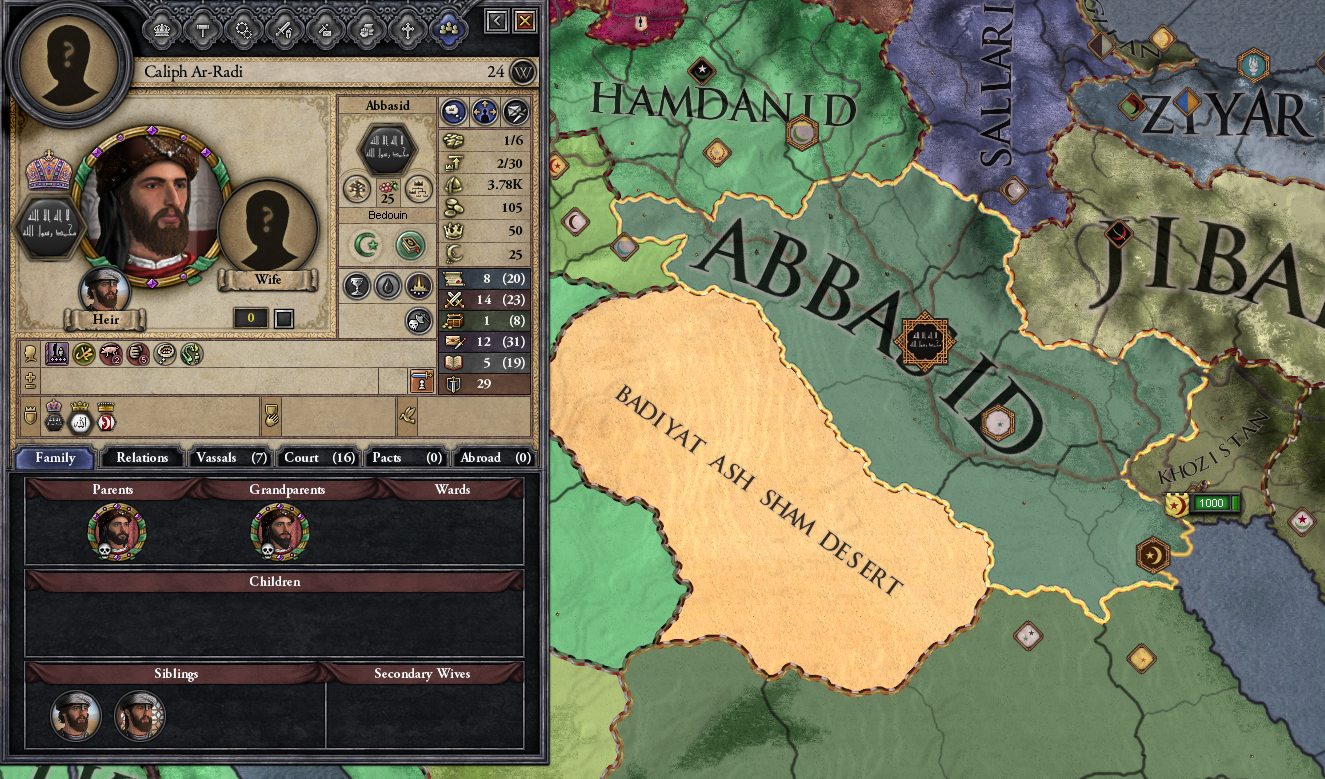 al-Hasan of the Hamdanid dynasty: Both al-Hasan and his brother Ali hold lands in the Al-Jazira region north of the Abbasid Caliphate. They are both Shia rulers, Ali holding the western lands under his brother’s overlordship. Historically speaking al-Hasan played an important role in the politics of the Abbasid Caliphate, while his brother was essential in holding back the Byzantine attacks across the Al-’Awasim in Cilicia. They later received the titles Nasir al-Dawla and Sayf al-Dawla, under which they are better known. 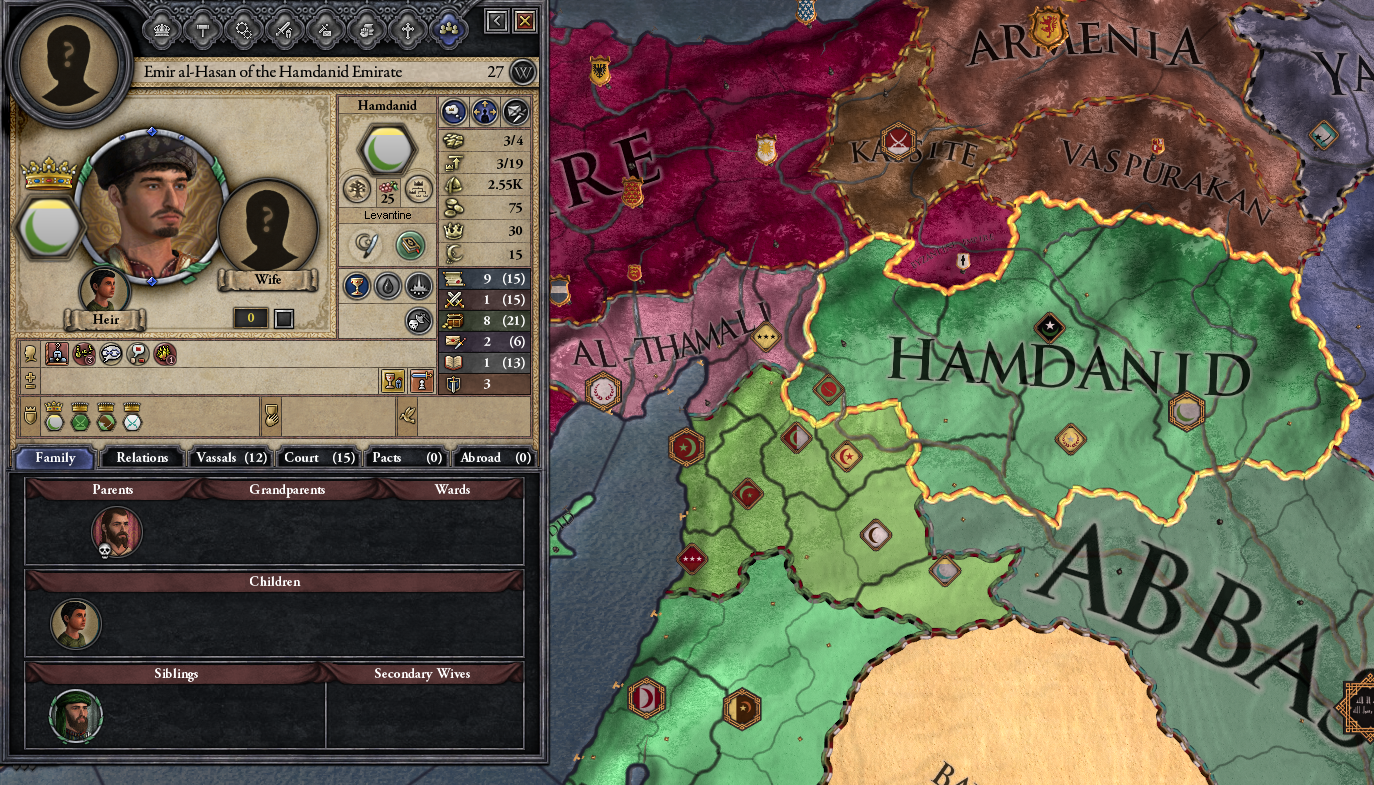 
As the first of importance in the dynasty, Ali was a governor and commander under the Ziyarid ruler Mardavij (better known as the last Zoroastrian ruler). After finding out his lord was planning to eliminate him, he took his troops and established the Satrapy of Fars. After Mardavij was assassinated by his own slave troops, the Buyid dynasty was bolstered with troops and started expanding north and eastwards. Later on Ahmad would go on to become a leading figure in the Abbasid Caliphate, and start the Buyid’s century long control of the Caliphate, until they were pushed out by the Seljuks about a hundred years later. 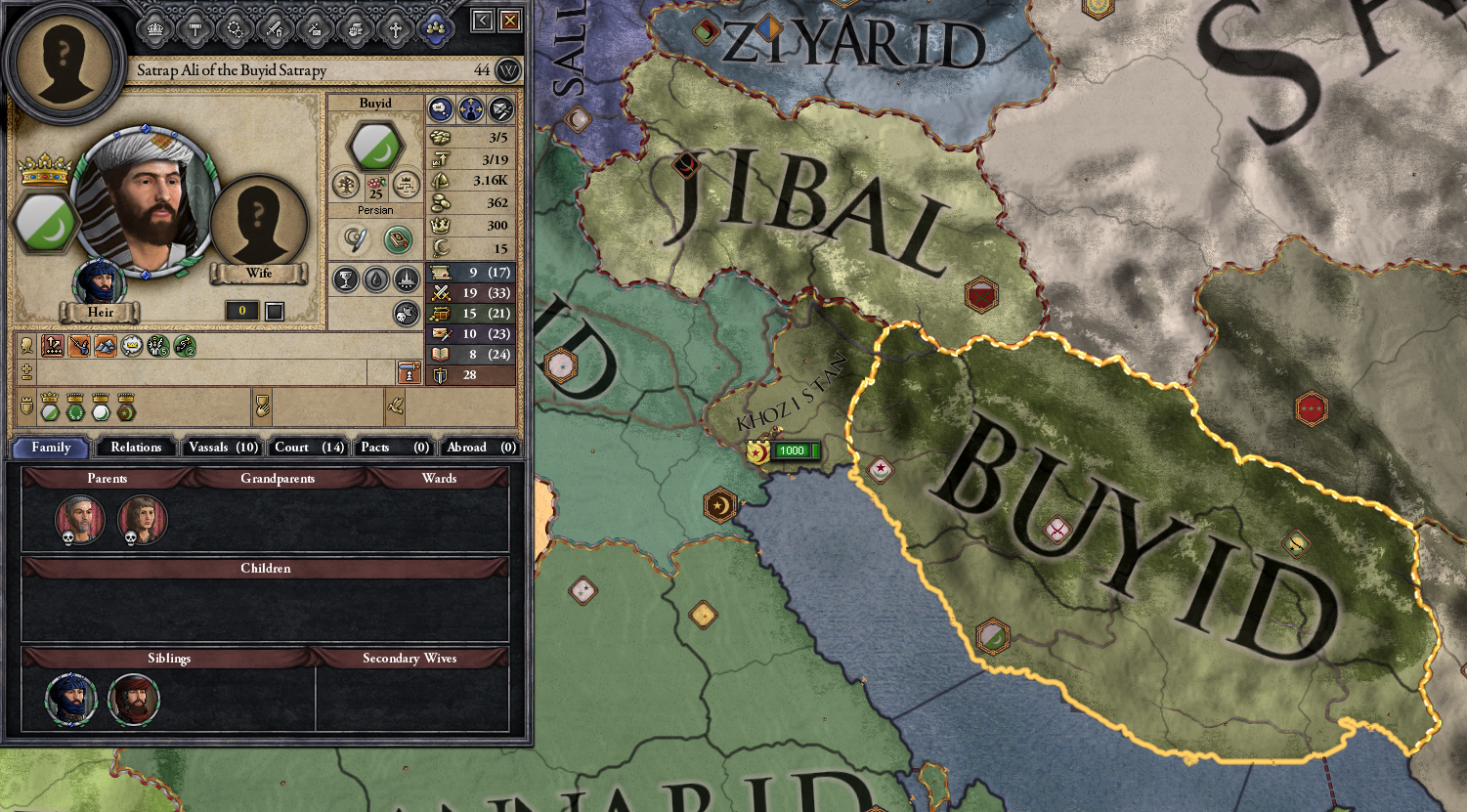 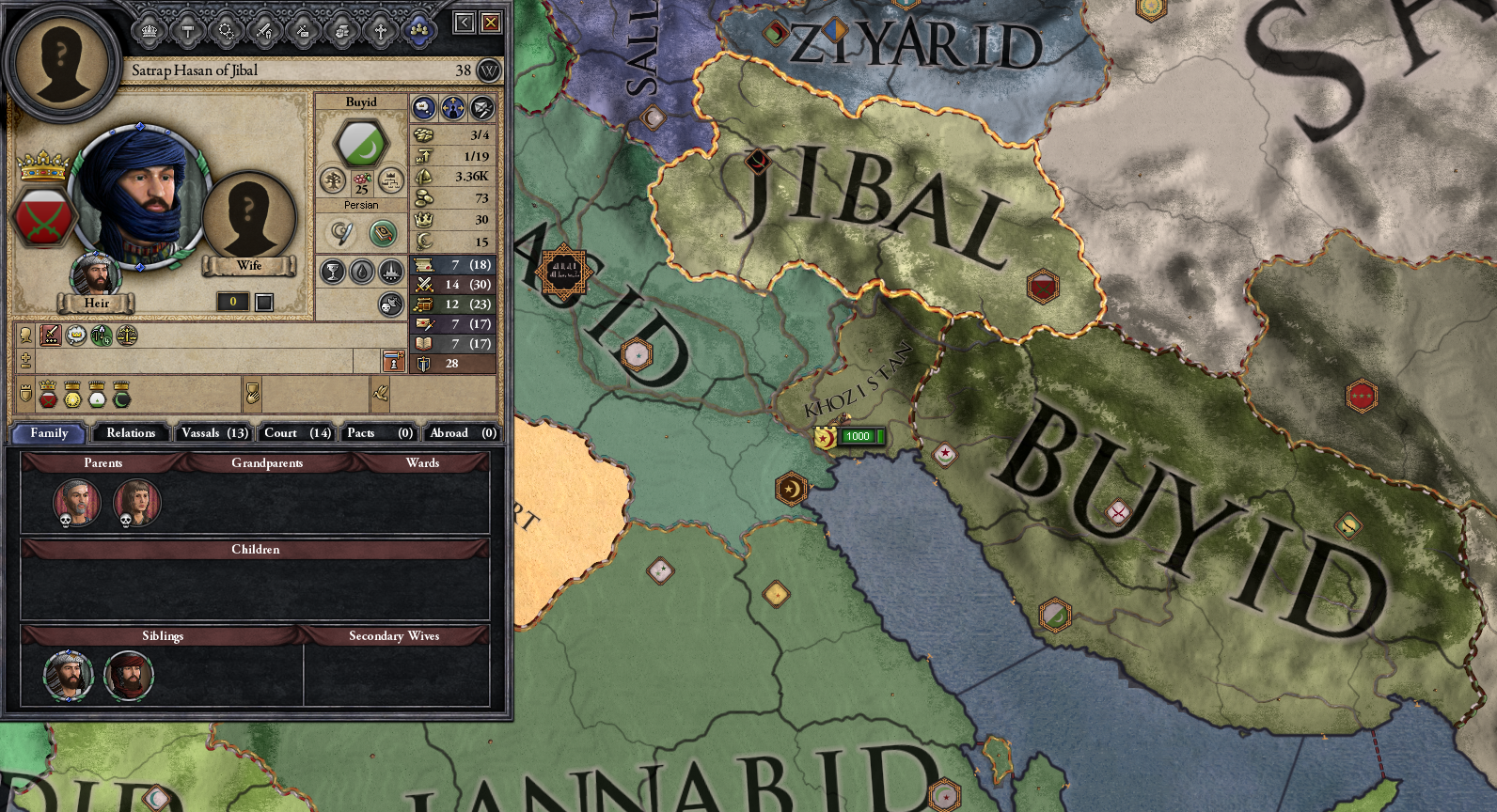 Vushmgir of the Ziyarid dynasty: Vushmgir is the Sunni brother of Mardavij, better known as the last major Zoroastrian ruler. Vushmgir would go on to embrace Islam, and bring his people properly into the fold. In our start he has inherited the remains of his brother's shortlived kingdom. He has several Zoroastrian vassals, and he is surrounded by greater Muslim nations at all sides. Who's to say you couldn't pick up your brother's legacy properly though, and put an end to the Muslim incursions into Zoroastrian lands. 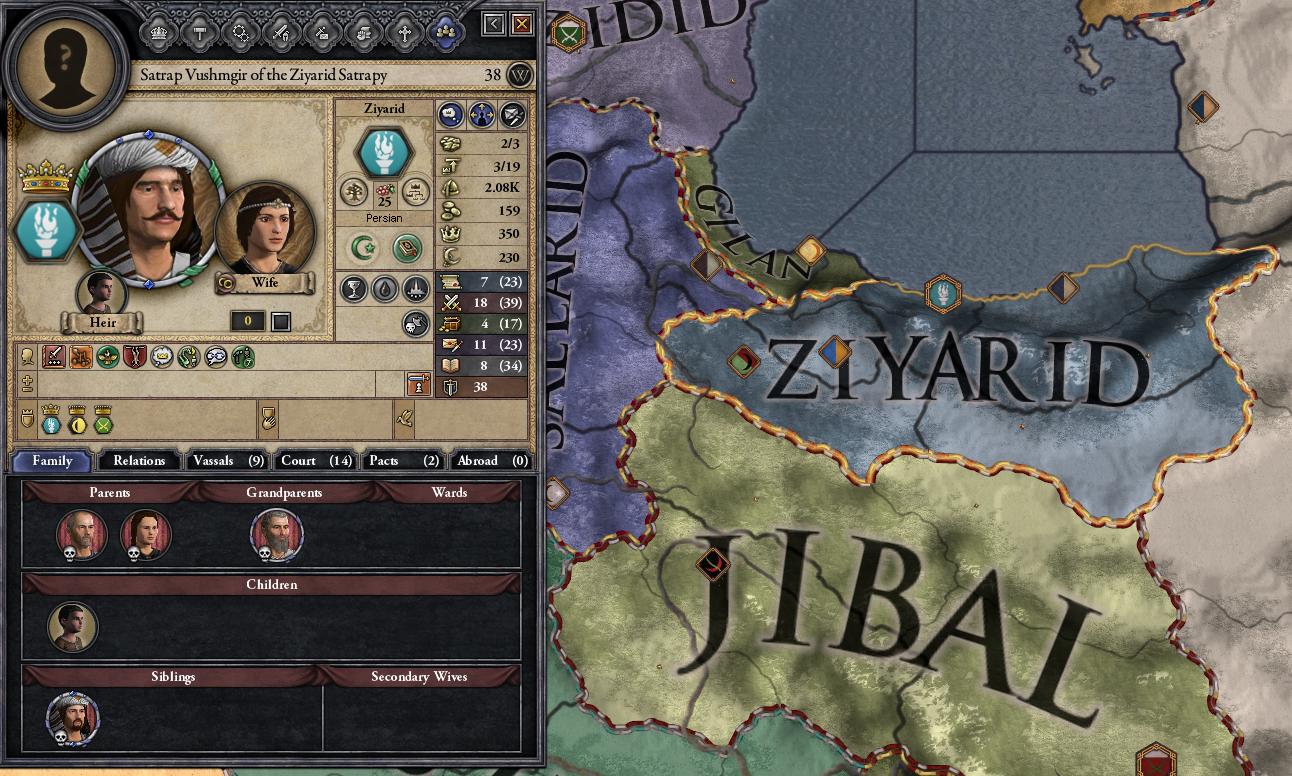 Caliph Abd-al-Rahman of the Umayyad dynasty: In far flung Iberia, far from the diminishing authority of the pathetic Abbasid Caliphs in Baghdad, Abd-al-Rahman has established his own Caliphate. Centered around Cordoba, the Iberian Caliph is ready to challenge the Fatimids in Ifriqiya as well the French and León to the north. He would go on to create the The Caliphate of Cordoba would continue for almost a century before it shattered into lots of Taifa Successor kingdoms, which were so well known during the tumultuous times of the Reconquista. 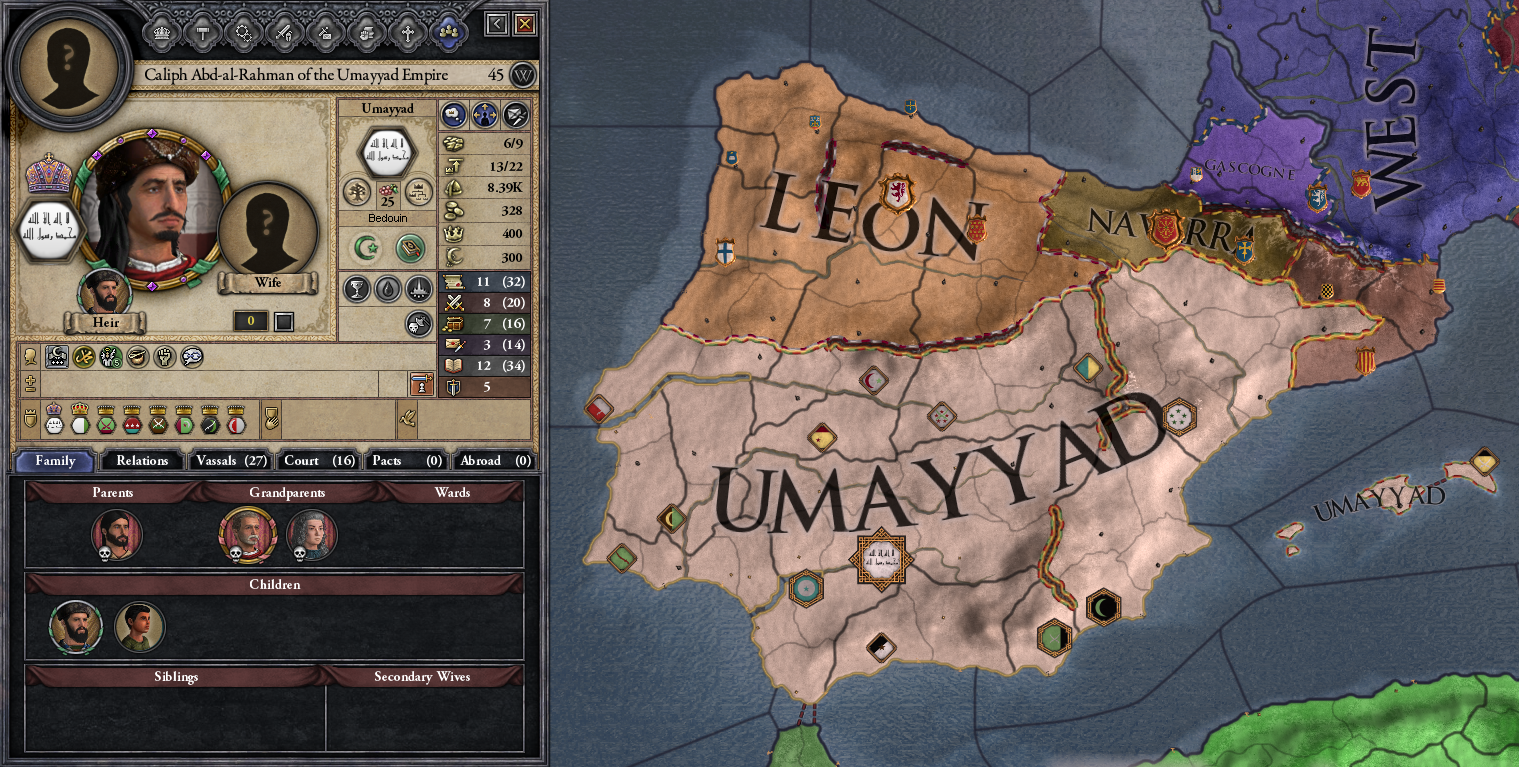 Shouldnt the Umayyads be of Andalusian culture by now?

Would the Abbasid caliph lose the empire title should we have de jure requirement on?

This certainly is shaping to be a very interesting start. Though i rarely play as pagan, I'm already curious for tomorrow.
Toggle signature
Check out the links to our projects:

Umayyads have the Caliph name despite not having a Caliphate title to their name like the Abbasids do.

Is this only for the starting ruler in particular, the Umayyad Empire until dynasty is ousted, or are there actual anti-Caliphs similar to Anti-popes?

Nice! So many questions about the new Caliph!

- Do the different Sunni Caliphs have CBs or at least a negative opinion modifier of one another?
- Is it possible to hold both the Sunni Caliphate and the Caliphate of Cordoba? And/or do you get prestige for destroying the other?
- Does the Caliph of Cordoba function as the religious head of his own realm? If so, can he also call for Jihads?

He was already featured two days ago....

Since it wasn’t covered in previous dev diaries, can you share what the holy sites of the Qarmatians are?

All hail Shahanshah Vushmigr saviour of Persia and hammer of the mohammedeans!!!
Toggle signature
Why are you wasting time reading this?

Damarrocarion said:
He was already featured two days ago....
Click to expand...

Awesome!
I'm also curious about which republics are active in this bookmark.

If you get the time, Abd ar-rahman iii should probably have the dwarf trait

Close-up enough of Armenia to see the kingdom title :thumbs: Hopefully Vaspurakan will just accept peaceful vassalisation.
Toggle signature
By God I have leaped over a Wall, by God I have run'd through a Troop, and by my God I will go through this death, and he will make it easie to me.​
-- Major-General Thomas Harrison, Fifth Monarchy man, unrepentant regicide, on the scaffold.​
M

Looks like a good time to play as a Shia Muslim.
Toggle signature
Sit now there, and look out upon the lands where evil and despair shall come to those whom thou allied. Thou hast dared to mock me, and to question the power of France, master of the fates of Europe. Therefore with my explorers thou shalt see, and with my spies thou shalt hear; and never shall thou be released from vassalage until all is fulfilled unto its bitter end.

Patriarch of Bub said:
Would the Abbasid caliph lose the empire title should we have de jure requirement on?
Click to expand...

I was thinking the same thing. Perhaps they should hold Iraq instead, since even without de jure claims on the Arabian Empire they'll have a pretty good CB (Caliphal Subjugation) to retake significant chunks of it?

Edit: @Snow Crystal, speaking of titles, why are the Umayyads both holding an empire and a kingdom? Is that just to make sure that de jure vassals don't start looking for independence?
Toggle signature
You must become king. Of everything. - From the Diagram, Tenets of Instruction, Back of the Footboard: paragraph 1

Part of the Tianxia mod team, bringing the Far East into CK2

True, but looks like it's the Bagratid (?) king and Vaspurakan is count tier; should be on!
Toggle signature
By God I have leaped over a Wall, by God I have run'd through a Troop, and by my God I will go through this death, and he will make it easie to me.​
-- Major-General Thomas Harrison, Fifth Monarchy man, unrepentant regicide, on the scaffold.​