Menu
Install the app
You are using an out of date browser. It may not display this or other websites correctly.
You should upgrade or use an alternative browser.
Crusader Kings II 69321 Bug Reports 19619 User Modifications 10424 Suggestions 5829 Tech Support 6285 After Action Reports
Show only dev responses

Welcome to the first developer diary about ‘The Iron Century’ this week. We will post a Developer Diary every day this week, show-casing some interesting starts and other minor things you might expect to see in the new bookmark.

On the 7th of August 936, Otto I was crowned King of the Germans. He initiated his arduous campaign to crush his rivals and reconquer the lost territory in Italy to reform the Holy Roman Empire. The Magyars settled down in the Carpathian Basin and began to make their mark on the world as they conquered and pillaged their neighbors, becoming feared across Europe. In the north the Christians were trying to push into the Scandinavian Peninsula to start converting the pagan kings, but the Germanic faith still stood strong among the vikings. In Baghdad far to the south-east, the ancient Abbasid Caliphate that once ruled an empire stretching from Persia to Hispania finally fell to infighting, left only with the heartland of their former empire. And on the shores of Africa a new rival rose up in the form of the Fatimid Caliphate, ready to fill the vacant regions left behind by their adversary.

We know a lot of people have asked for a 10th century bookmark, and similarly we have long wanted one as well, as the 10th century had a lot of interesting history to offer. It is the birth of the Fatimid caliphate, the fall of the Abbasid caliphate, the rise of the Ottonian dynasty and the decline of the Karling dynasty. 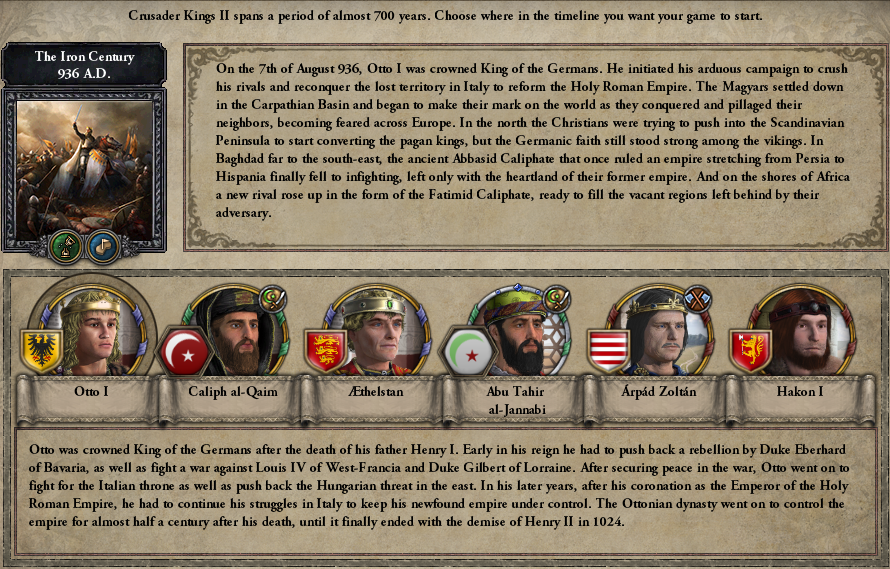 We have set up six recommended characters for the start date, though that is not to say we haven’t filled the world with other interesting characters for you guys to try out as well.

King Otto of Germany: In many ways Otto is the protagonist of the bookmark. He has just been crowned King, and has quite the task ahead of himself in trying to put together the Holy Roman Empire and beat back the pagan encroaching from the east (Hungarians) and the north (Norse tribes). To the west, the vassal holding the Stem-Duchy of Lotharingia (Lorraine), Duke Giselbert, recently changed his allegiance to the young King Louis Karling of West Francia. Not to mention the tumultuous kingship of Italy, that will be needed to recreate the Holy Roman Empire. 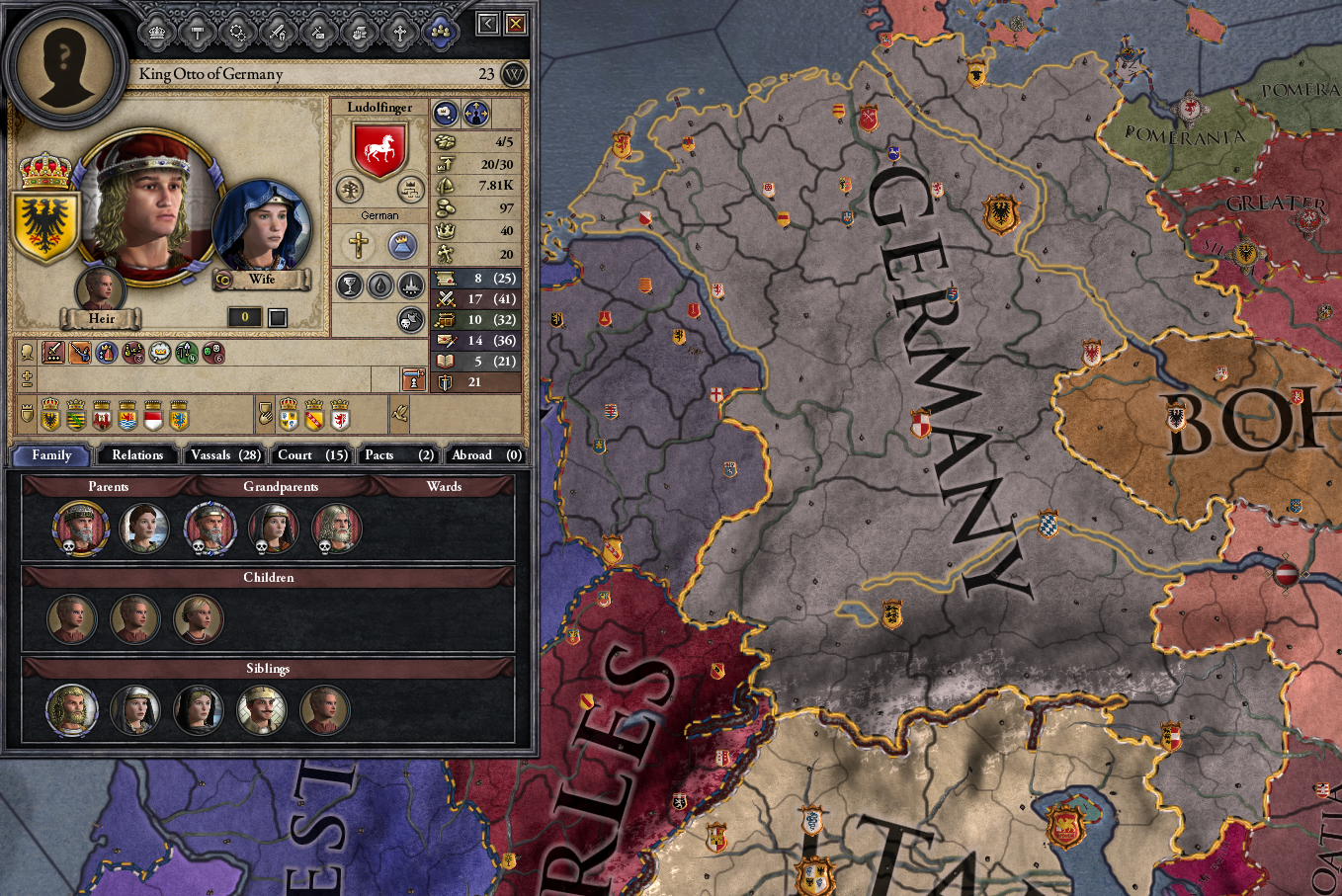 Caliph al-Qaim: Only two years have passed since al-Qaim took up the position of Caliph after the death of his father, the legendary al-Mahdi who carved out a nation at the shores of North Africa. With the weak Abbasid Caliphate having been shattered these last decades, the Fatimids are trying to take on their rightful positions as overlords of the Muslim world, but not all their vassals are as fond of them as they might think. Only a few years after our start Abu Yazid would start a revolt that would plunge the newly founded Caliphate into a crisis that almost broke it apart. And in the east a new threat rises in the form of Al-Ikhshid, the newly appointed governor of Egypt who is ready to support the Abbasids.

King Æthelstan of England: As the first king of a truly collected England, Æthelstan is very much in the prime of his power. But only a year later, historically speaking, he had to fight the coalition of the Kingdoms of Dublin, Alba and Strathclyde in the Battle of Brunaburh. His victory secured the new frontiers in the north, but if he had lost? Who can say what would have happened with the Isles if that had happened. 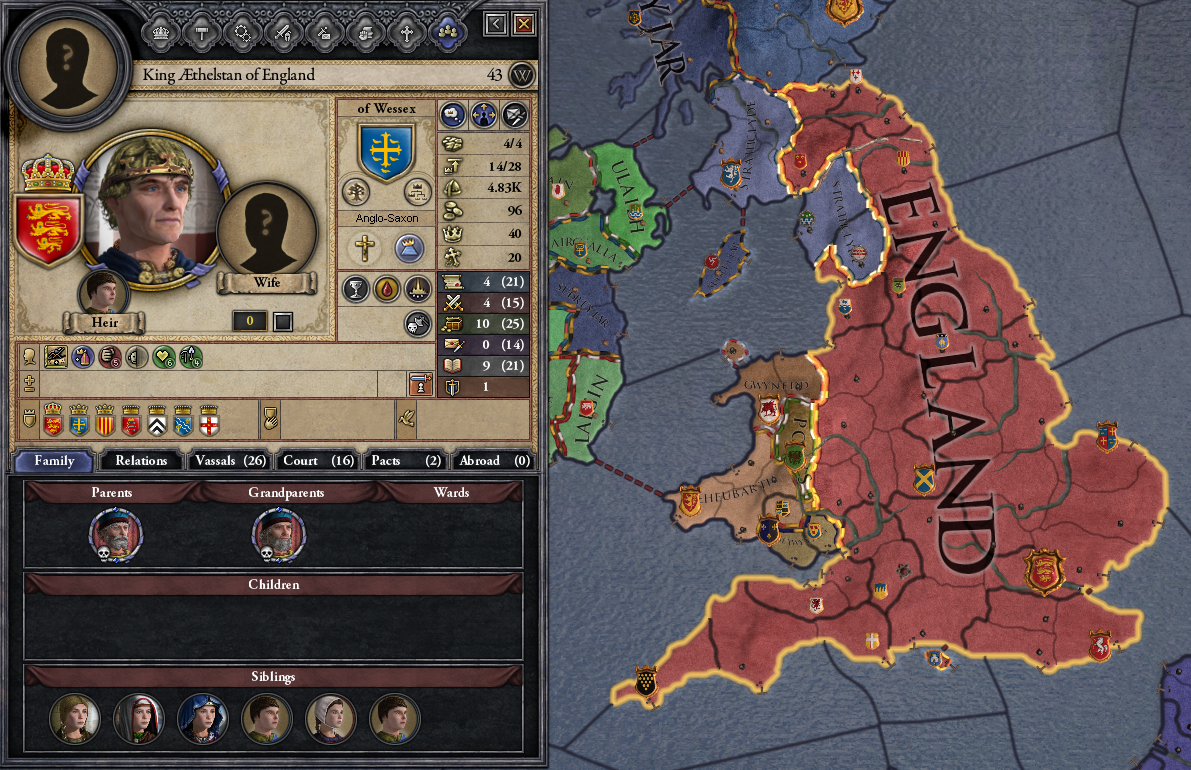 Abu Tahir of the Jannabid Emirate: The Jannabids were notorious around our bookmark as they entered Mecca under false pretenses and slaughtered the pilgrims, and brought the Black Stone back to their capital and held it hostage for decades. They continued to raid the lands of the Abbasids and the Ikhshidids, until they eventually faltered and started to diminish in the latter half of the 10th century. 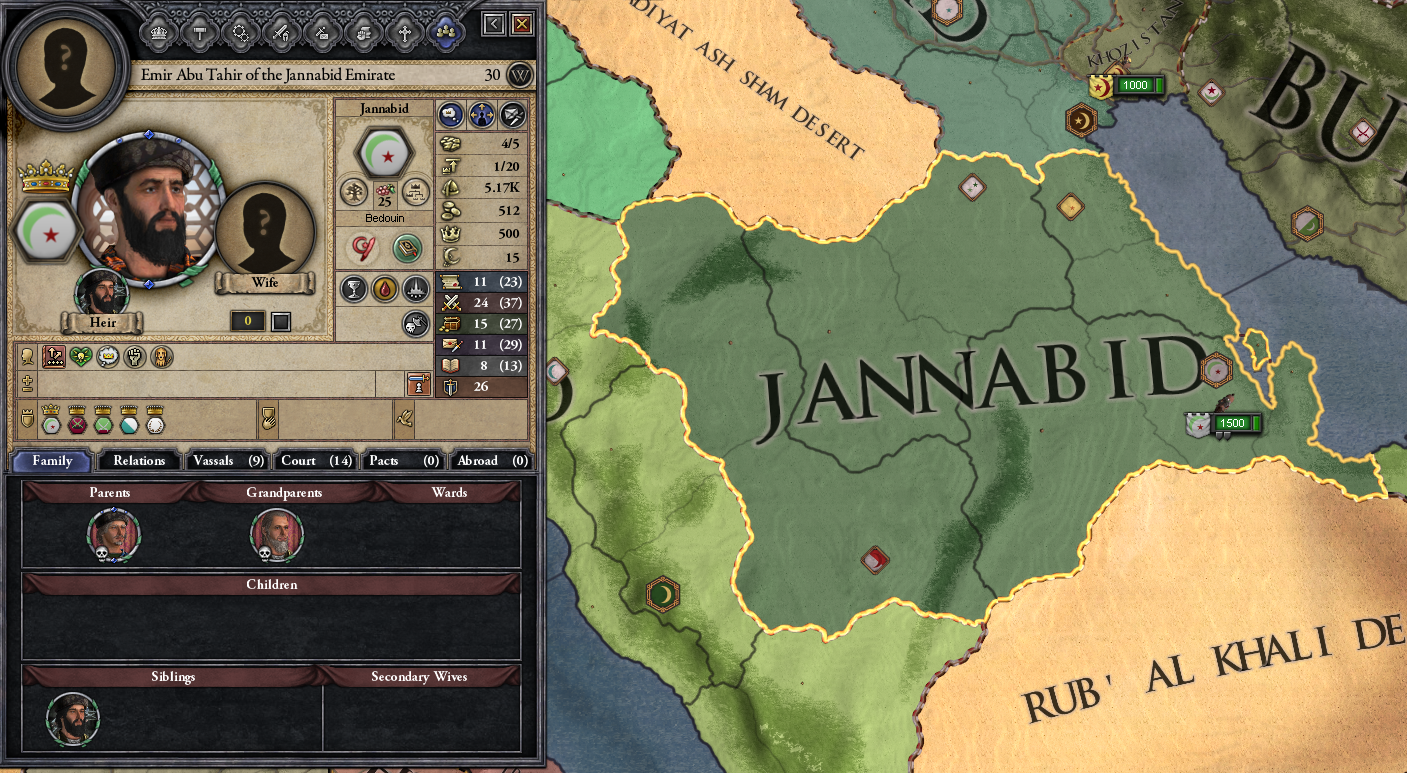 King Árpád Zoltan of Hungary: Not many years has passed since the Magyars descended from the steppes and into basin, pushing out the Bulgarians and anyone else who stood in their path. However, now they are one of the few pagans left in the area, surrounded by the Germans to the west, Bohemians to the north and the Bulgarian Empire to the south. Led by the Árpád dynasty, it is time to find their destiny, be it as the raiders and conquerors of Europe, or (as they did historically) become one of the defenders of Christianity. 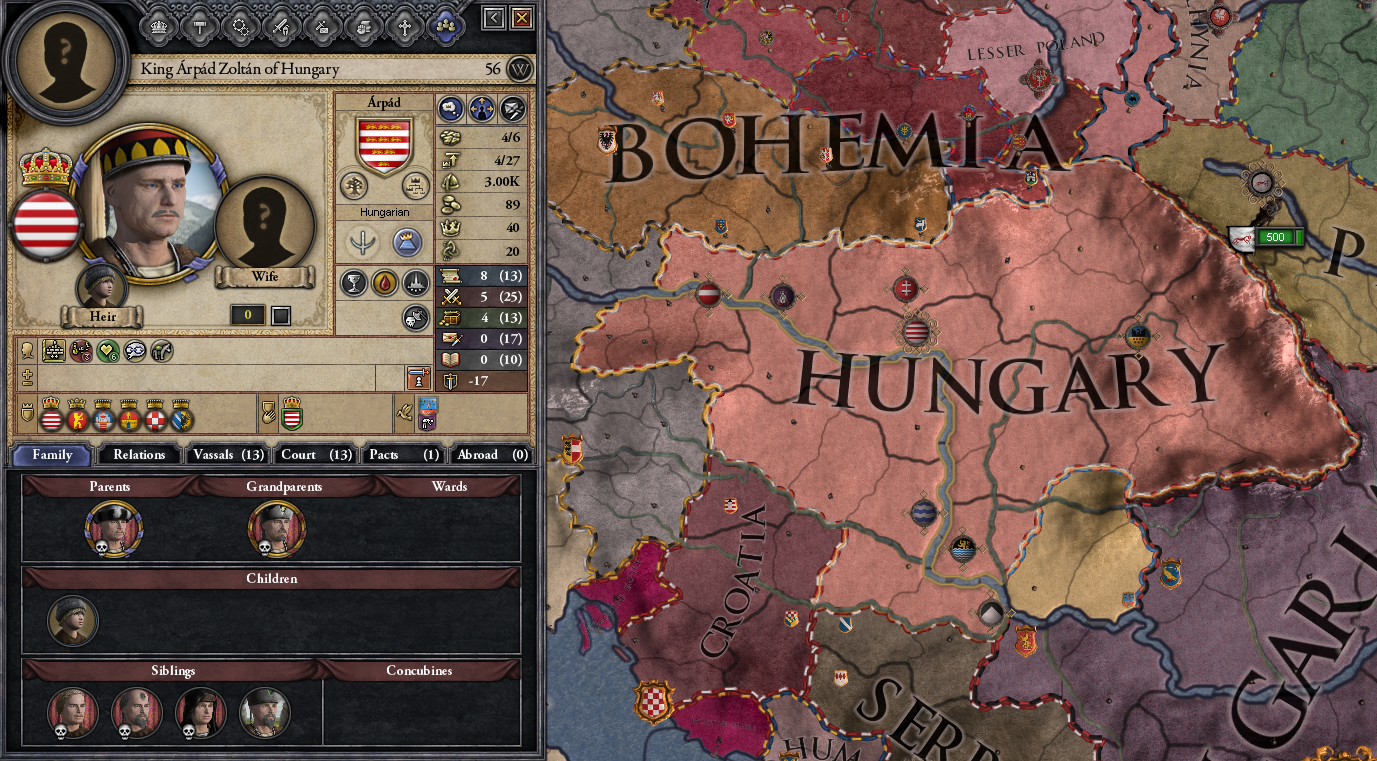 King Hakon (the Good) of Norway: Young Hakon is 16 year old as he lands in Norway. Raised by King Æthelstan of England, he has now returned to his take up overlordship of his country. Not long ago his half-brother Erik Bloodaxe killed two of their other brothers and took control of the land, but he has recently been thrown out by the Norwegian Jarls. Still brooding in the north of Scotland with his army, he can still be seen as a threat to Hakon's rule, but he is not the most immediate one. As a Catholic, Hakon is certain to be in trouble as all his vassals follow the old ways, as does his pagan neighbors to the north and east. 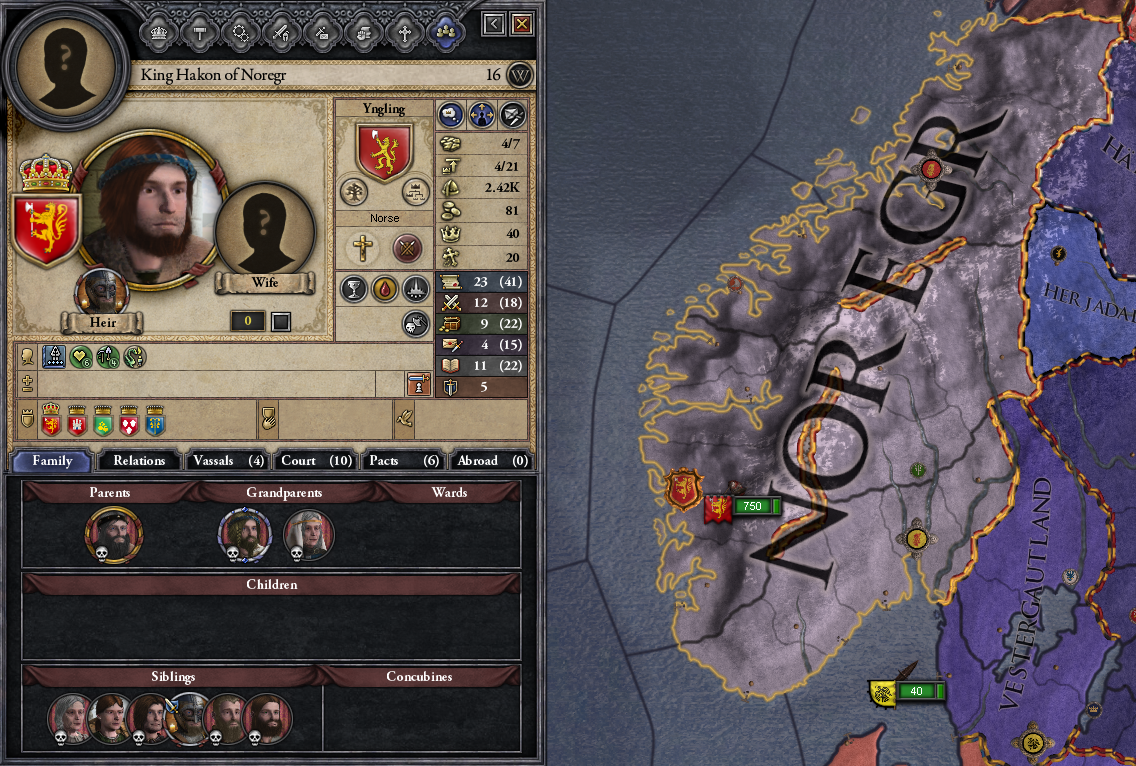 We hope you guys are as excited to test out the new bookmark as we are for you to see it. Tomorrow we will talk about some interesting Christian characters you guys will be able to try out!

PS, for those interested in AARs, I've asked WJS to test out the Iron Century patch and write one. I love the ones I've read so far, so hopefully you will as well Here's a link! https://forum.paradoxplaza.com/foru...s-rebellion-an-iron-century-mini-aar.1179523/
Toggle signature
Twitter: https://twitter.com/SnowCrystal_GD

I love you.
Toggle signature
The cake is a lie.

Which of these characters have new bloodlines and what bonuses do they give?

Blackwhitecavias said:
Which of these characters have new bloodlines and what bonuses do they give?
Click to expand...

Bloodlines will be talked about on the Dev Diary on Friday.
Toggle signature
Twitter: https://twitter.com/SnowCrystal_GD

Snow Crystal said:
Bloodlines will be talked about on the Dev Diary on Friday.
Click to expand...

ok, I'll look forward to seeing those along with other information about the bookmark this week them.

Those are some interesting characters!
Will Abu Tahir be Hurufi or was another Shi'a heresy added?

Also - Poland in 966 was baptised - will it be represented in any form of narrative event or something rather than pure randomness? Also in the year 1000 there was a Congress of Gniezno, where Polish king was crowned by Otto III and for a moment, historians argue, Poland became part of the HRE (well, it was purely symbolical, but still...). It would be strange to start playing in 936 and see Poland for the rest of the game stay slavic, just like it's possible in the earlier bookmarks.
Toggle signature
The cake is a lie.

SkyGreen24 said:
Those are some interesting characters!
Will Abu Tahir be Hurufi or was another Shi'a heresy added?
Click to expand...


wielkiciensteam said:
Also - Poland in 966 was baptised - will it be represented in any form of narrative event or something rather than pure randomness? Also in the year 1000 there was a Congress of Gniezno, where Polish king was crowned by Otto III and for a moment, historians argue, Poland became part of the HRE (well, it was purely symbolical, but still...). It would be strange to start playing in 936 and see Poland for the rest of the game stay slavic, just like it's possible in the earlier bookmarks.
Click to expand...

We haven't added anything specific for Poland. It is hard to make anything happen 30 years after the start of a playthrough, as the game can play out in a thousand different directions at that point.
Toggle signature
Twitter: https://twitter.com/SnowCrystal_GD

Any chance we can see the features of the Qarmatian heresy? I imagine they must have either Raiding enabled or a special event to allow us to re-enact their sacking of Mecca.

I'm quite sad that Abd al-Rahman III Umayyad didn't make it to the interesting characters. He was the greatest figure of Andalusian Spain and in 929 was proclaimed the first Caliph of Cordoba. He supressed the rebellions of his state, defeated the Fatimids, constructed the palatine city of Medina Azahara, a UNESCO world heritage site. His reign corresponds to the splendor of Andalusian Muslim Spain. He is definitely more imporant for the time than some of the figures selected.
https://en.wikipedia.org/wiki/Abd_al-Rahman_III
Last edited: May 20, 2019
Toggle signature
The Kingdom of Navarra and Medieval Basques did not practice Cognatic Succession

CatilinamSum said:
Any chance we can see the features of the Qarmatian heresy? I imagine they must have either Raiding enabled or a special event to allow us to re-enact their sacking of Mecca.
Click to expand... 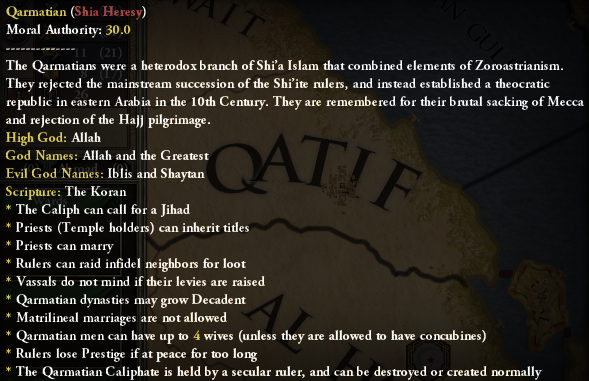 Woo, finally confirmed after much teasing!

Is he getting a unique government as well?

Is he getting a unique government as well?
Click to expand...

I am sure some intrepid young modder is going to take up that challenge.
Toggle signature
My CK3 Steam Workshop. Featuring mods like Prisoner Marriage, Pluribus Casibus Belli (new CBs), and Battlefield Safety

That's great! It would be nice if all the heresies had this sort of thematic flavor.

I think it would be much more appropriate to rename Zoltán Árpád to Zolta Árpád. Although both names are accepted in Hungarian for the ruler, Zolta is much much more common, and it seems that the English wiki is the only one addressing him as Zoltán. The reason behind this is that even though the names sound really similar, they have different roots. Zoltán is coming from Turkish from the word Sultan, Zolta (Solt or Zsolt) is coming from the Slavic languages (zolota, zlata meaning gold or golden).

Dragatus said:
Interesting. So it's basically Shia with Warmongering nature.
Click to expand...

Makes sense, most mods that feature them do more or less the same thing if I recall.
Toggle signature
"Ph'nglui mglw'nafh Cthulhu R'lyeh wgah'nagl fhtagn!"

Snow Crystal said:
Sadly, he is not.
Click to expand...

Dragatus said:
I am sure some intrepid young modder is going to take up that challenge.
Click to expand...

I’m not that young!

Technically I am getting middle-aged too, but we can be young at heart.
Toggle signature
My CK3 Steam Workshop. Featuring mods like Prisoner Marriage, Pluribus Casibus Belli (new CBs), and Battlefield Safety