Today we will put Pagans aside, go back to good old Catholics, and explore one of the new features coming for them with Holy Fury: Coronation Ceremonies. 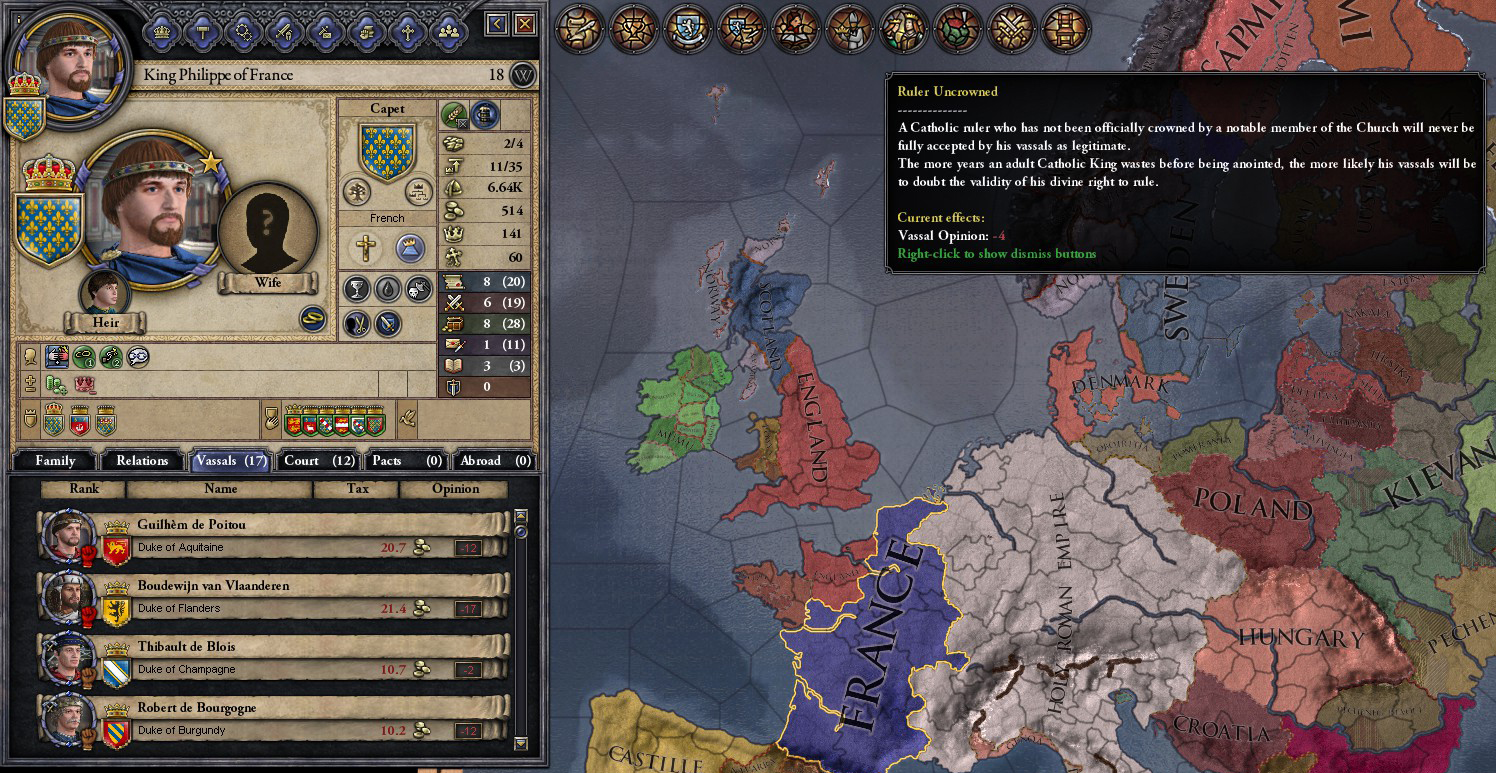 With this expansion, succeeding to the throne of a Catholic Kingdom or Empire will not be a simple matter of gaining the title itself. The new ruler will need to organize a Coronation Ceremony (via new intrigue decision) and be recognized as legitimate by a notable member of the Catholic Church.
If a Catholic ruler fails to be officially crowned, he will see his popularity slowly fade away each year, as his vassals grow more and more restless under what they perceive as an illegitimate King. 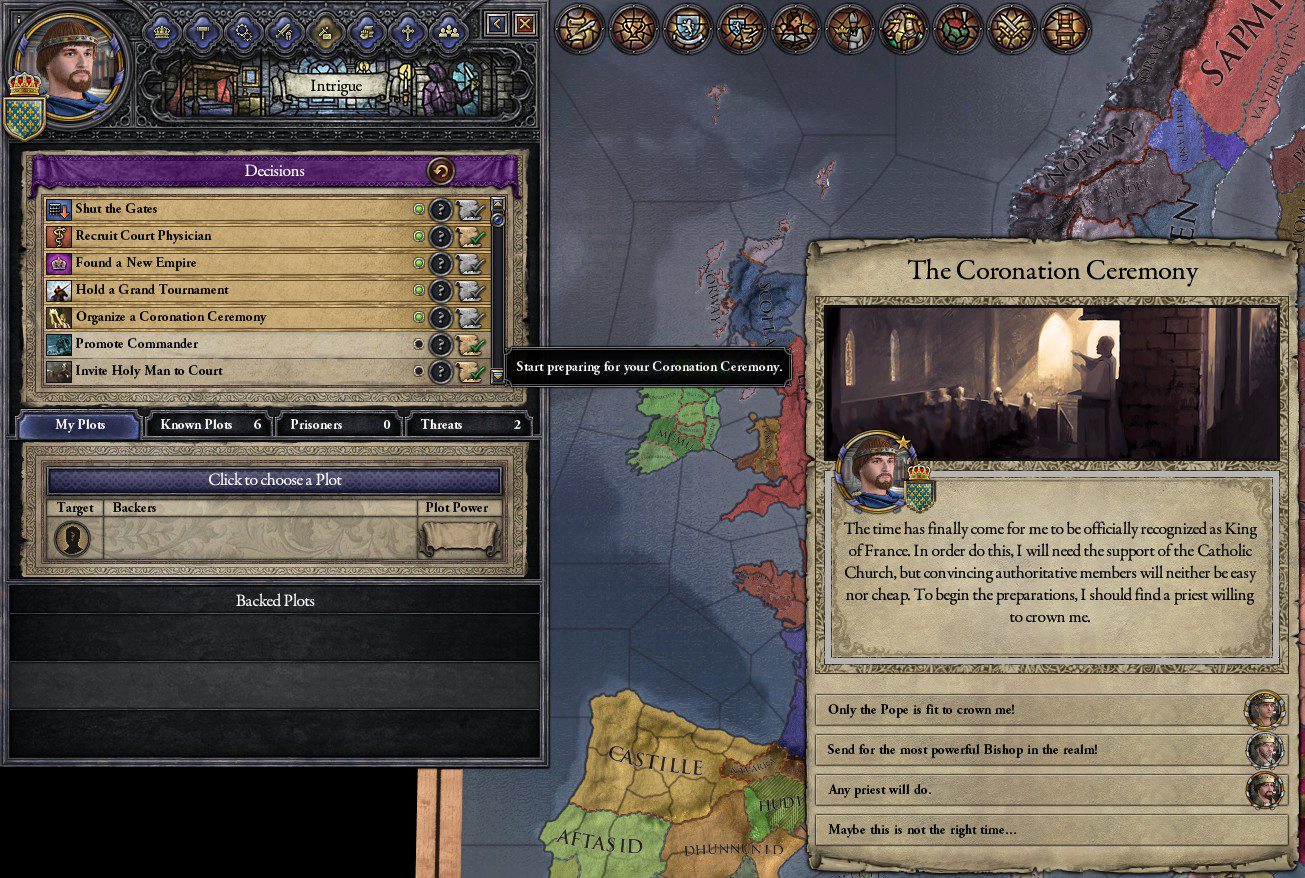 Coronation is divided into two phases: preparation and ceremony.
During the preparation, the ruler will decide whom he wishes to be crowned by, he will meet the Church’s demands, and invest money to organize the ceremony. In the second phase, the ruler will host the ceremony itself, interacting with guests and ultimately receiving his crown.

When organizing a ceremony, a Catholic King can choose between three possible options when it comes to officiant priests: he can be crowned by a low-status theocratic vassal within his realm, by a powerful theocratic vassal within his realm (such as a Cardinal, Antipope or Prince-Bishop), or by the Pope himself. Catholic Emperors who fail to enact the Free Investiture succession on the other hand will be limited in their selection only to the Pope.
While being crowned by a local Bishop is a lot less prestigious, it is also much cheaper, as higher-ranking members of the Church will be prone to make outlandish requests, especially if they dislike the ruler requesting them to officiate his coronation. 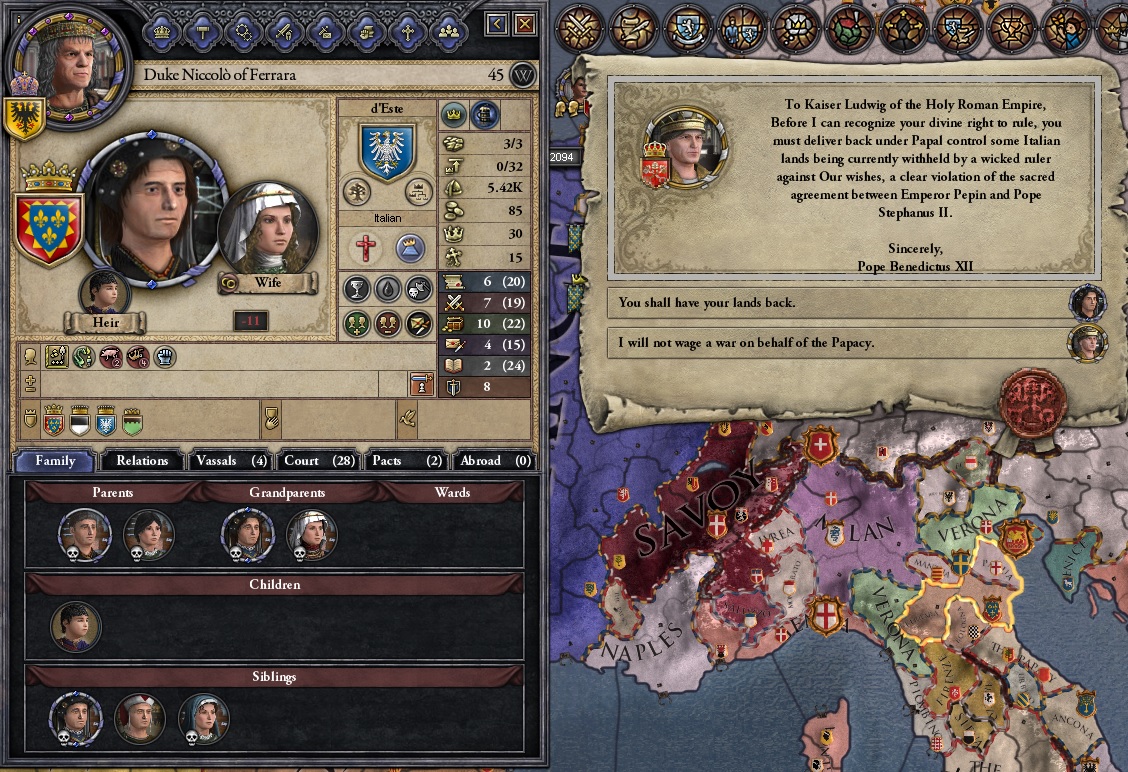 Requests may vary a lot, especially when it comes to the Pope: the Holy Father might ask you to change your realm’s Investiture laws, wage war against an Excommunicated ruler on behalf of the Papacy, or to restore some of the Central Italian provinces to the Holy See.
Be sure to be in good relations with the Pope before asking for a coronation if you wish to receive a more tolerable offer.

Once the demands of your chosen priest have been met, you will be able to select a budget for your ceremony which will determine the kind of coronation you will receive, the kind of flavor events tied to it and the number of guests participating in it.
An extravagant coronation is a prestigious event to which all your vassals, courtiers and even neighboring Christian rulers are invited, a secluded coronation is a private feast to which only your Council will have access to. 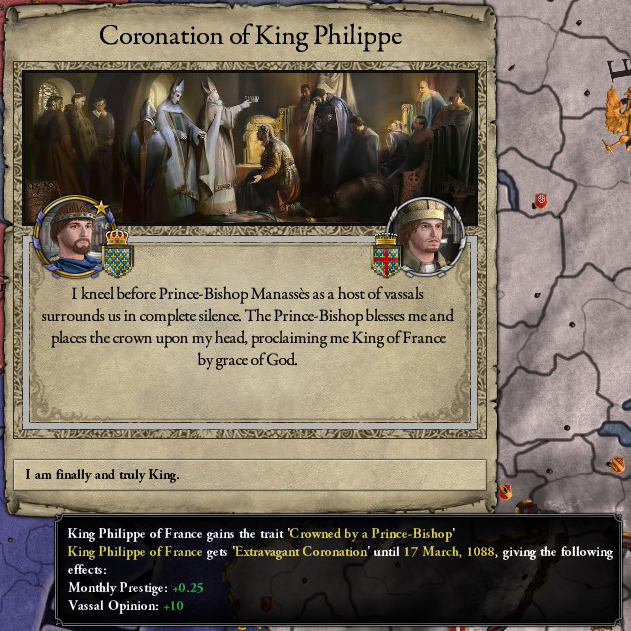 Once the ceremony has been concluded, your character will receive a specific trait tied to the priest that crowned him, as well as retain any additional perks granted by the flavor events experienced during the feast leading up to the coronation.

You might have noticed from the screenshots that this new mechanic affects character portraits as well: Catholic Kings and Emperors that have not been crowned will no longer wear the high-tier headgear in Holy Fury, defaulting to the Ducal band instead until their rank has been officially recognized by the Church (naturally, if you do not own Holy Fury, Catholic Kings and Emperors will wear the appropriate gear by default as before). 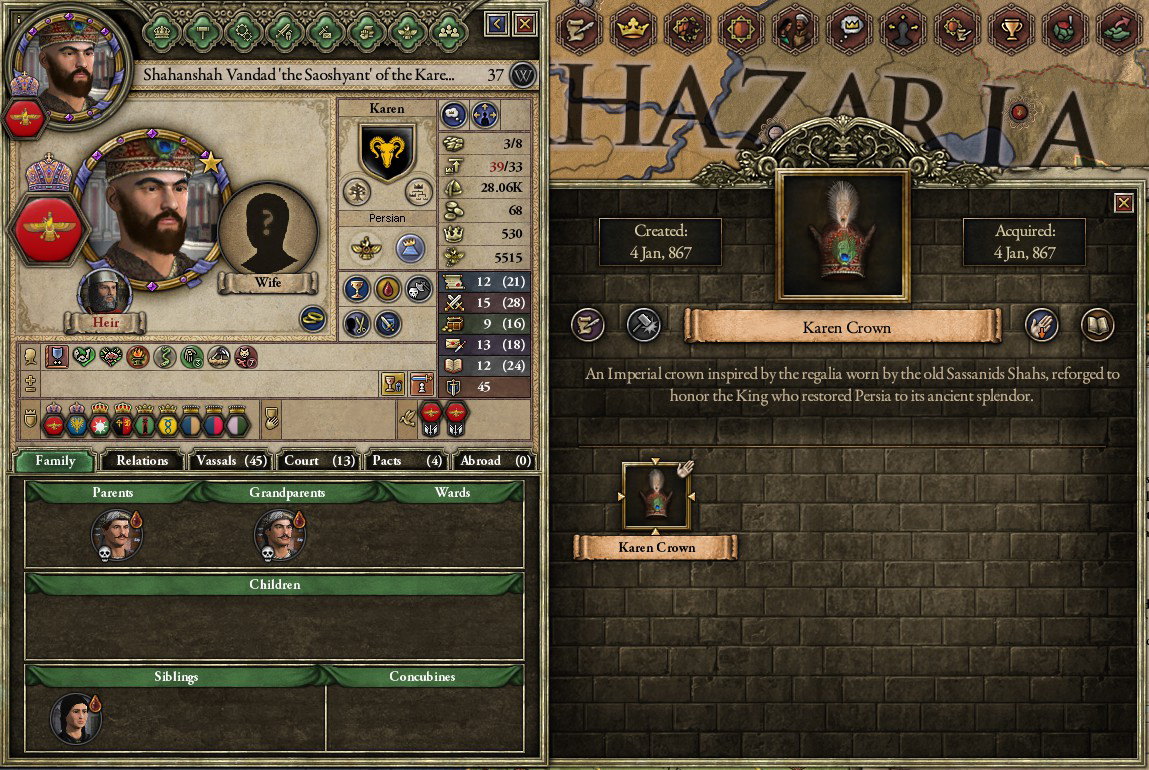 This is not the only portrait-related addition though: Holy Fury will bring to the game a series of special crown artifacts that will be visible on portraits whenever the characters are wearing them. Most of these artifacts can only be used when the character meets certain requirements and they are often tied to a specific title rather than a character’s dynasty. 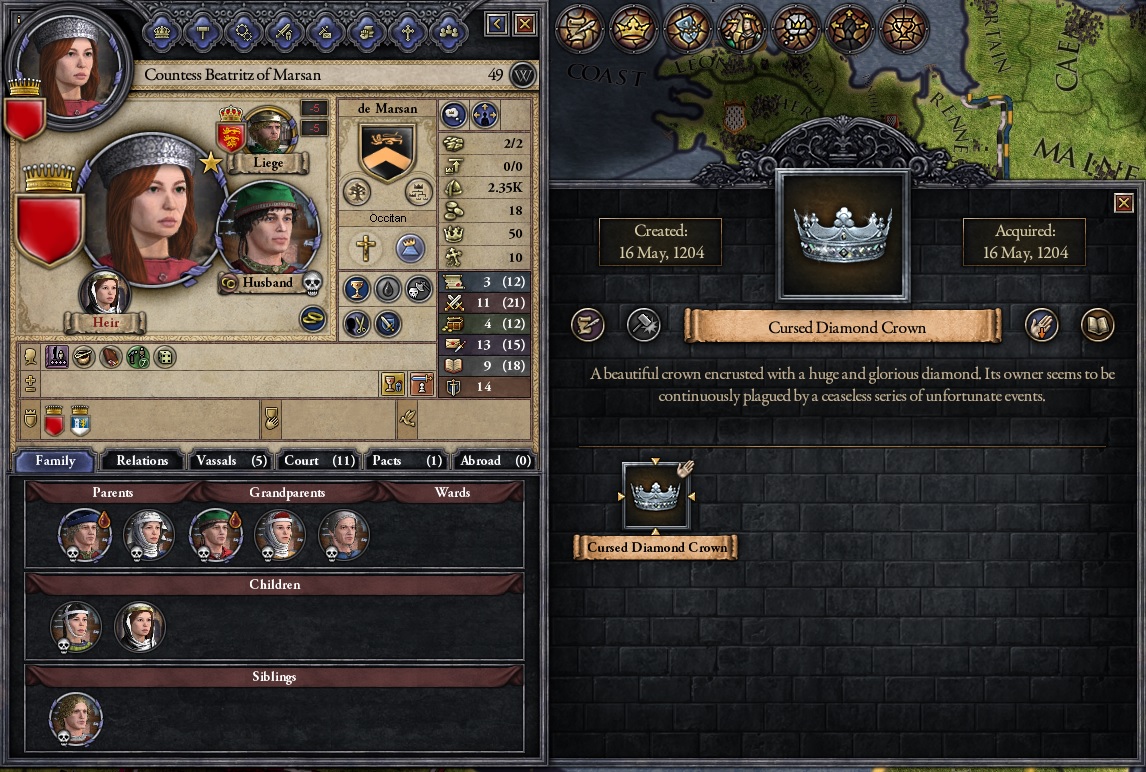 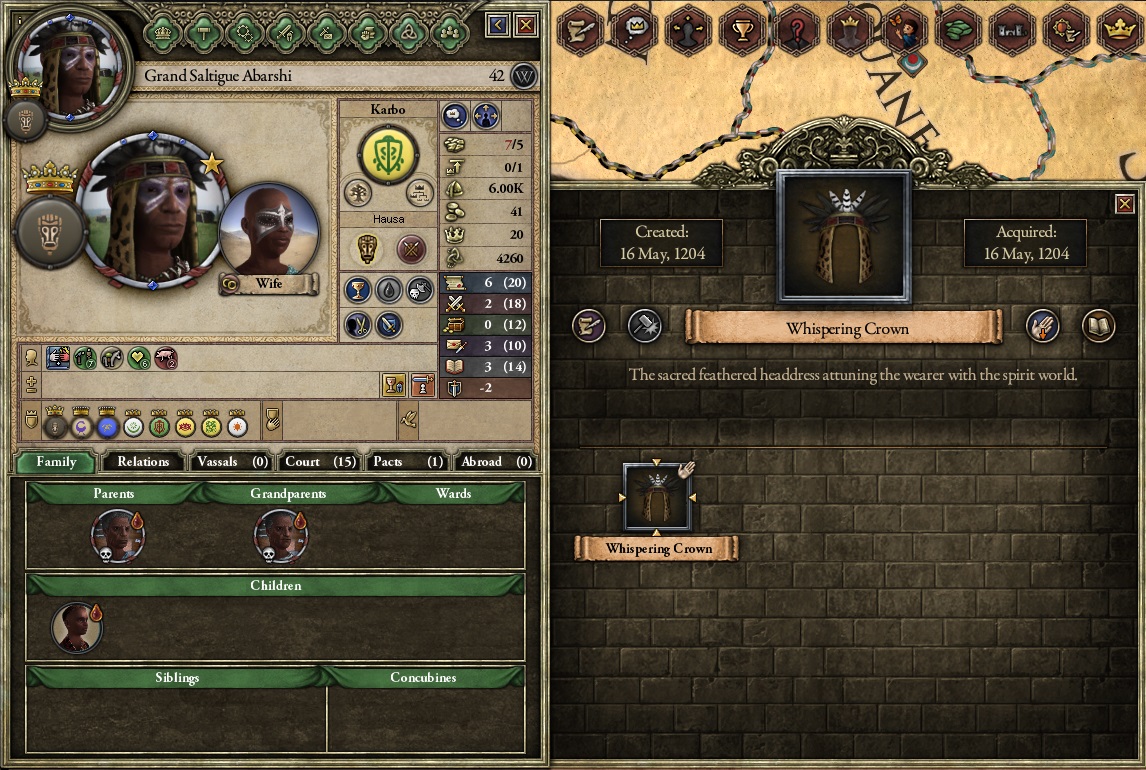 Awesome. I've always wanted crowns that actually shows up on the character portrait.

Do Byzantine Emperor has a coronation event chain?

do orthodox get to this Coronation Ceremony like Catholic

I can't wait for Holy Fury! Though i wonder... 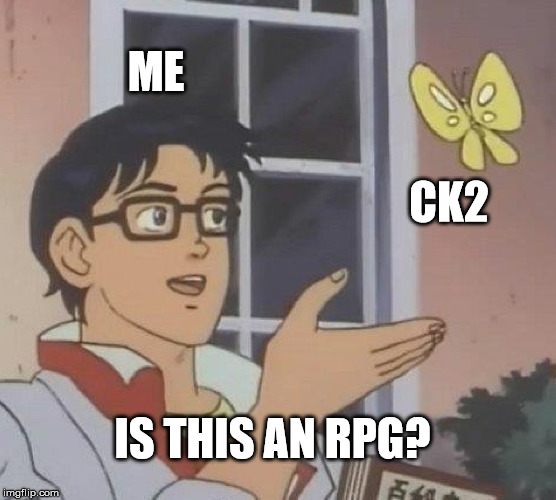 Expand signature
Thou shalt not make a machine in the likeness of a human mind.

Unready said:
Do Byzantine Emperor has a coronation event chain?
Click to expand...

Can we rename holy fury to ck+ ?

do we lose all crowns if our ruler dies or we can keep them. Would be realy nice to keep all crowns, and even if we dont wear them to have some small prestige bonus.

Do Viceroyal Kings undergo the same Coronations or are they exempt as their power is derived from the Emperor?
Is it exclusively Catholic or do other Christians get the same events? (Nvm answered)
Is their a Doctrine that includes Coronations as a Pagan mechanic?

Thank you for this DD. I have some questions:
- Could you tell us about which crowns will be availabre as a "visible" headgear?
- Will have some impact if you have a crown (I mean the Crown of Lilies, Pearls, etc) in your inventory (either visually or in other way)?
- Will the Iron Crown of Lombardy now pass to the next HRE Emperor or will it remain with the Salian Dynasty? Will the rest of Artifact Crowns do that too? Can you set a crown to be linked to a title?
- Will you need an Artifact Crown in your inventory to be crowned?
Expand signature
The Kingdom of Navarra and Medieval Basques did not practice Cognatic Succession

Mortheim said:
I can't wait for Holy Fury! Though i wonder...

Silfae said:
Only if he is a Catholic.
Click to expand...

That is a bit strange, isn't it? Practically all abrahamic religions had some kind of coronations.
Also, what about catholic heresies (especially cathar)?
Expand signature
Thou shalt not make a machine in the likeness of a human mind.

Are you planning to incorporate the CK2+ thing where uncrowned rulers can have weak claims pressed against their titles even if they wouldn't normally be able to?
Expand signature
"There is no such thing as an unbiased argument - indeed, facts support bias', or else they wouldn't exist." - Grand Historian

Hmm, nothing on excommunication? I really hope it gets an overhaul in Holy Fury.
Expand signature
Jewish Immersion for Crusader Kings II: An extensive Jewish namelist, dynasty, and province name overhaul.

Faerillis said:
Is their a Doctrine that includes Coronations as a Pagan mechanic?
Click to expand...

Silfae said:
by a powerful theocratic vassal within his realm (such as a Cardinal, Antipope or Prince-Bishop), or by the Pope himself.
Click to expand...

So even if you have an Antipope you can ask the Pope to crown you and he can accept?
Expand signature
The Kingdom of Navarra and Medieval Basques did not practice Cognatic Succession

Arona said:
do we lose all crowns if our ruler dies or we can keep them. Would be realy nice to keep all crowns, and even if we dont wear them to have some small prestige bonus.
Click to expand...

Do Viceroyal Kings undergo the same Coronations or are they exempt as their power is derived from the Emperor?
Is it exclusively Catholic or do other Christians get the same events? (Nvm answered)
Is their a Doctrine that includes Coronations as a Pagan mechanic?
Click to expand...

No, only regular rulers.
Yes, exclusive to Catholics.
No, all the flavor events are tied specifically to Catholics, adapting it to Pagans would have required a lot more work (especially considering how customizable Pagan religions are).


Rinewind said:
Do the different 'Crowned by X' traits give different bonuses?
Click to expand...

Though you didn't tell anything about being crowned by a local priest.
Is the local priest with the highest opinion automatically selected? Or doesn't opinion matter if you choose a local priest? I can imagine that when every priest hates you, this must in some way effect your coronation...
Show hidden low quality content
You must log in or register to reply here.
Share:
Facebook Twitter Reddit Pinterest Tumblr WhatsApp Email Link
Top Bottom