Jump to latest Follow Reply
Menu
Install the app
You are using an out of date browser. It may not display this or other websites correctly.
You should upgrade or use an alternative browser.
Cities: Skylines 5967 Support & Bug Reports 7842 Suggestions & feedback 2976 Modding & Resources 1871 Official Information & Announcements 139 City Journals and Let's Plays 481 Cities: Skylines Console & Windows 10 Edition 885

Cities: Skylines - Concerts is a mini-expansion for Cities: Skylines that gives you the power to plan and present major concerts. It features music and images from Rock, EDM, and Pop/Folk bands - as well as a new music focused radio station, and released on August 17th.

Based on player feedback we’re now pumping up the volume by adding more ways to increase the effectiveness of the Festival Area. With the update we are adding three new buildings and each of those have certain synergies with the Festival Area and the band performances. We’ve also updated the animations of the crowds who come to enjoy the music!

Festival Fan Zone
Festival fan zone is a place to party, when your citizens for some reason can’t get to the actual festival area. There’s the best speakers in business and big screen to give your people live music- and video feed from the festival area. Merchandise booth makes sure everybody is looking good and food and drink stands are there to keep those party people energized for the whole event.

A Festival Fan Zone Increases the concert success chance by 5%. 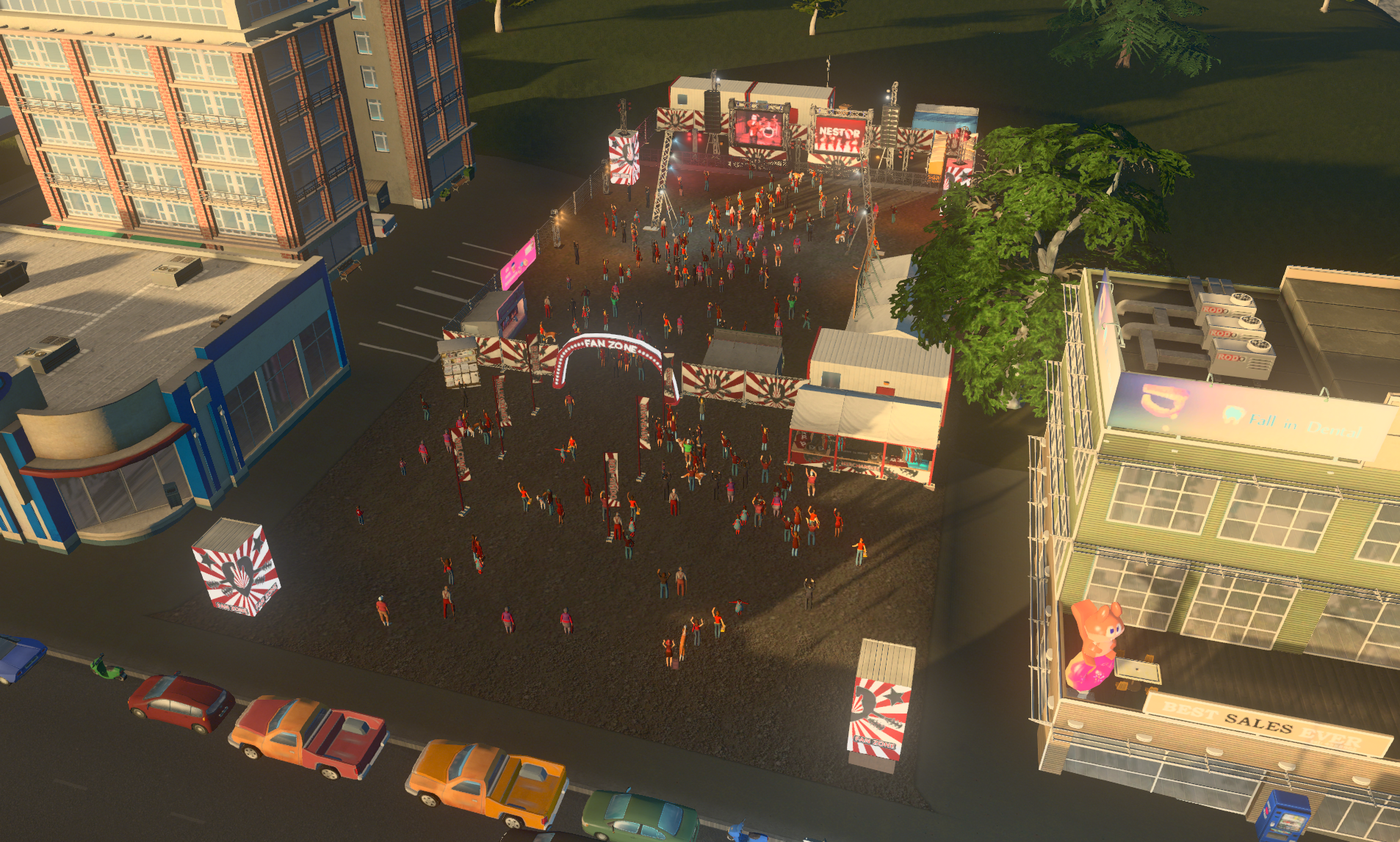 When the festival area is preparing for the next big event, Club C is the hippest place in town to check out big stars and upcoming talent. This old industrial hot spot has found new lease of life under the vibrant music scene of the metropolis.

The Music Club increases the ticket sales of the concerts by 10%. 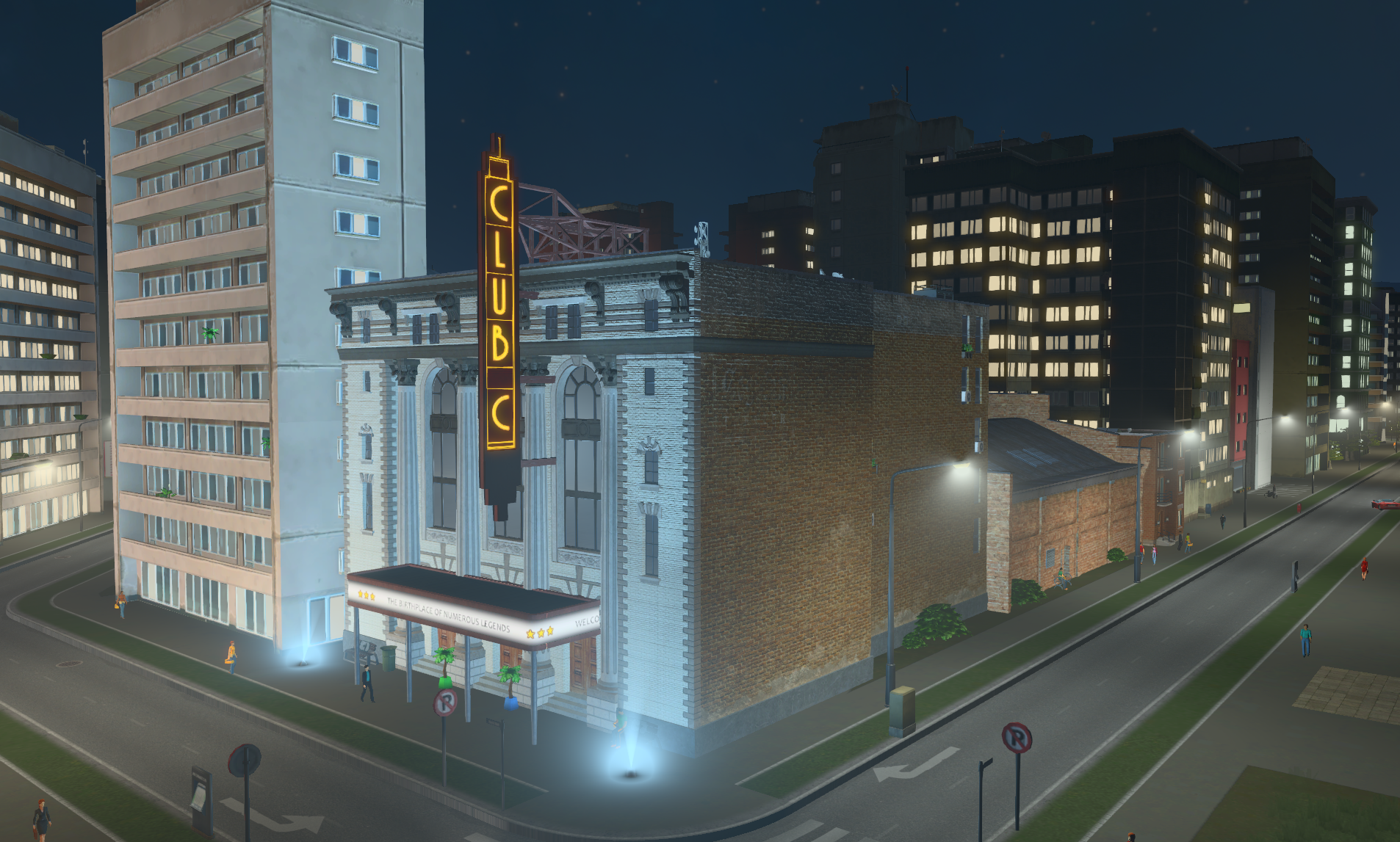 Those who say radio and tv is dying haven’t visited the brand new high tech Media Broadcasting Building. Non-stop radio programs ensure you are always in the loop what’s happening in the city while biggest names of the small screen are recording their weekly shows in front of live audience in their own high end studios. It’s impressive broadcast tower makes sure everybody knows what’s the main topic of the day in coffee room conversations. 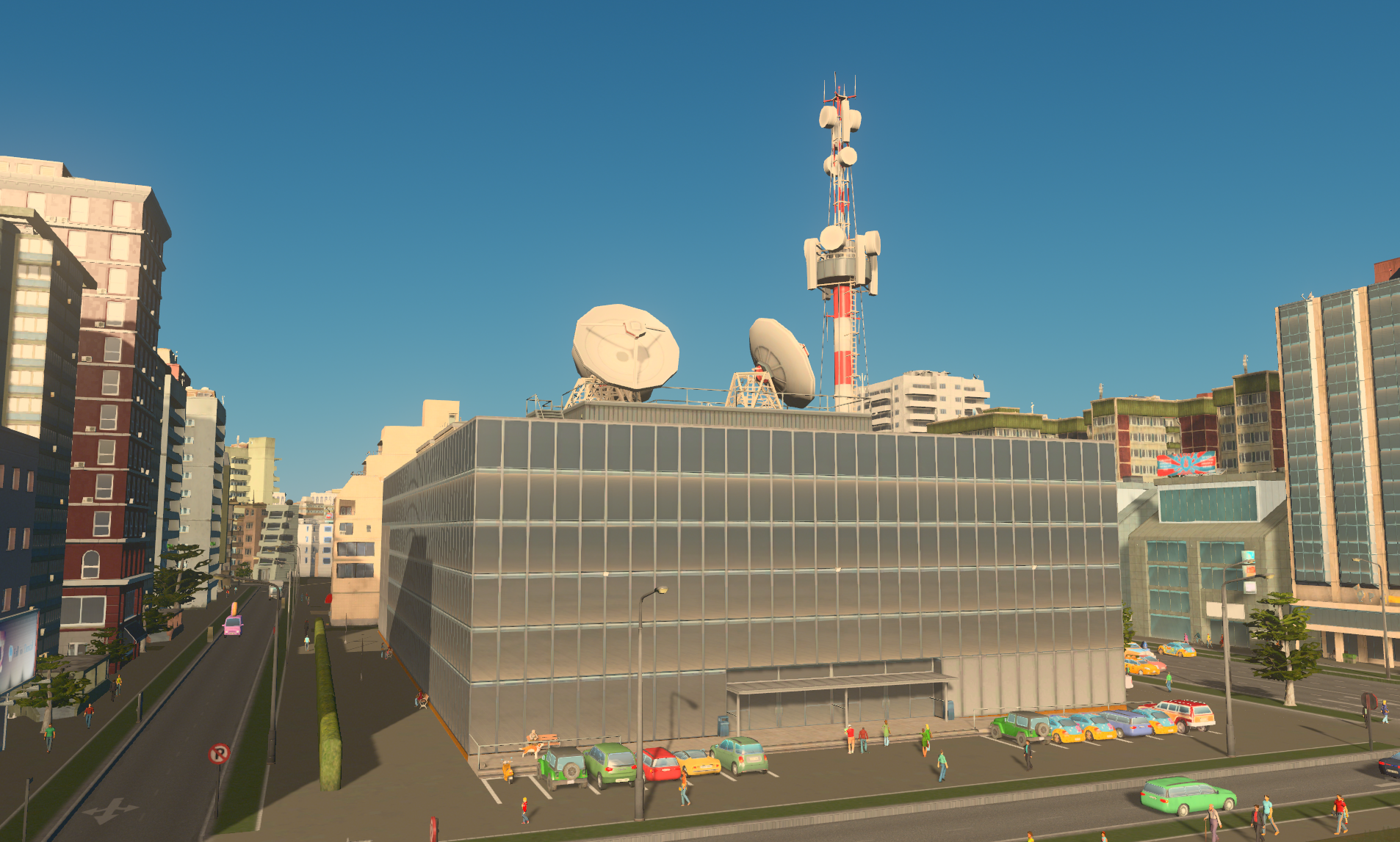 All of this, as well as the new crowd animations, will be added to the Cities: Skylines - Concerts DLC on October 19th.

All three of those buildings are wonderful and will fit in wonderfully in my city!

10/10 this is fantastic. I mean, there are other things I'd lik... "A TSUNAMI HAS STRUCK THE CITY!" ...like to be fixed and expanded upon, but this is just great!

This makes the DLC worthwile, in my opinion.
Toggle signature
Common sense is the less common of the senses.

Researching why do democracies suck in Stellaris?

Toggle signature
I never learned from a man who agreed with me. Robert A. Heinlein.
I love you all and there's nothing you can do about it!!!
RELee, your not always friendly forum curmudgeon.

Those are some good looking antennae and sat dishes on the new media building! I hope they will be props so we can use them all over the place.
Toggle signature
Berlin 1:1 updates: https://twitter.com/AmiPolizeiFunk
N

Really nice! All credit to the creators for the best game ever and the great work with the expansions! But I really miss one thing in the game and that's fireworks shows. That would be completely awesome! I hope it will be added in a future expansion or update )
H

How about adding more music genres? Country/Bluegrass, classic rock and classical (with their own custom stages). Popup concerts in large parks? Street performers? Music venues for fairs and festivals?

Is Club C based on any venue in particular? It looks kind of familiar...

Beer Fiend said:
Is Club C based on any venue in particular? It looks kind of familiar...
Click to expand...

I'm looking forward to using the Concerts DLC in my cities. I haven't done so as yet, but this patch makes it sound worthwile. I'm very much looking forward to the new DLC and patch.
Last edited: Oct 13, 2017
Toggle signature
We have learned to fly the air like birds and swim the sea like fish, but we have not learned the simple art of living together as brothers.- Martin Luther King Jr.
The whole problem with the world is that fools and fanatics are always so certain of themselves, and wiser people so full of doubts. - Bertrand Russell

co_emmi said:
Our artist says the inspiration behind the Club C is Hawaii Theater and some hotel in New York
Click to expand...

Ahh, reminds me a bit of some venues around Manchester (mostly the O2 Ritz and slightly of the Apollo).
L

Does modder can use the mechanic of the Festival to create new Festival? I love concert, it added great to my CMF zone (and the new fan zone will be great!)... but the Workshop CMF asset would be interesting if it could be converted!! Also, there is many "Clubs" on the Workshop, working as tourism and pleisure, will it be possible to convert them with "Club C" bonuses??

BTW anybody like those commercial specialization? I would have rather loved to see a new zoning than specialization. I've put a Tourism spec in a district, and got 20 hotels... no other buildings..its kind of detroying the purpose of hotel when tourist need to go elsewhere to shop! And plopping 4 districts to have leisure and tourism and commercial is not great looking! I think Zone/Area would have been more useful than Specialization... even for industrials...

CO_Miska said:
We’ve also updated the animations of the crowds who come to enjoy the music!
Click to expand...

At least it doesn't seem to have banned dogs from seeing their favorite band.

Wait what was released on August 17th?

chris_dftba said:
Wait what was released on August 17th?
Click to expand...

Can't you do a major DLC/Update, where you introduce medium density zoning? That would be a HUGE (read it in a Trump voice, well you probably did already) deal for many players.

Also I'd love to see the possibility for farm towns with large farms (maybe farms only zoning with HUGE - yes again - farms?).
Toggle signature
Kill it with fire!

co_emmi said:
Our artist says the inspiration behind the Club C is Hawaii Theater and some hotel in New York
Click to expand...