Challenge: How would you build a fleet to defeat the Royal Navy?

Jump to latest Follow Reply
Menu
Install the app
You are using an out of date browser. It may not display this or other websites correctly.
You should upgrade or use an alternative browser.
Hearts of Iron IV 40424 Bug Reports 11742 After Action Reports (AAR)
A

Britannia rules the waves: but not for long. Can you build a fleet that can rival the power of the world's foremost naval power?

Setup: Every surface ship in the 1936 Royal Navy is on patrol in the Western Mediterranean and Italy wants you to design a fleet to destroy it for good. Your aim as Italy is to create the cheapest possible fleet that is capable of destroying these 6 Carriers, 12 Battleships, 3 Battlecruisers, 16 Heavy Cruisers, 40 Light Cruisers and 137 Destroyers by building new ships with advanced 1940 Naval Technology.

Your performance is determined by the cost of your fleet which can reliably defeat the Royal Navy. This is calculated by the combined cost of combat ships (ignore planes). For reference, the Royal Navy costs around 550,000 Industrial Capacity.

ACHIEVEMENTS:
All achievements will be awarded in Bronze, Silver, Gold or Platinum. The only prize is bragging rights!

Impossible Award: Win with a fleet that costs 200,000 or Less

RULES:
Design Xp may be added if it runs out
No researching new techs
Naval Spirits and doctrines may be changed for Italy
No land-based air support
No Minelaying
Only use Carriers Fighters and Naval Bombers provided (Does not count towards IC Cost)
Only use starting admirals
Fight the UK Navy only
Fleet may be trained and accidents repaired
You must continually engage the UK fleet until either fleet is completely destroyed (no repairing between battles)
Manual Retreating is not allowed
Fleets must be on Always Engage-Never Repair for the duration of the combat
No Submarines
No Convoy Raiding
UK Fleet must be remain properly fuelled
Pride of the Fleet may be reassigned for Italy
Advisors for Navy or Airforce may not be assigned

Then take the following steps:

1: BEFORE UNPAUSING THE GAME, DISABLE THE AI! Open the console with tilde "`" and type "ai", then press enter. This will disable the AI. Every time you load this file, you must remember to type "ai" in the console the the UK AI doesn't move the fleet. It is also recommended you make a backup of the save file.

2: Design your ships! There is no XP limit. If you run out of XP, open the console and enter "XP".

3: Build your ships. The easiest way to do this is to queue up ships, then open the console to enter "IC" (instant construction). This means you can produce 1 of each queued ship per day.

4: Organise and train your fleet. There is no time pressure as AI is disabled. It is recommended you train your fleet up to Level 3 (Silver bars). Make sure to repair any accidents that take place.

6: Once you have done this, assign an admiral and any traits available you want from the Italian starting Admirals, then place the fleet on Patrol with Always Engage and Never Repair on in the Western Mediterranean Sea Zone (between Sardinia and Spain).

7: Take a newly named save before you begin any combat. Name it "[Yourusername]RoyalNavyChallenge"

8: Go to the console and enter "nocb" and then declare war on the UK. A fleet battle will result!

9: Watch the mayhem unfold! If you want to post your victory in the thread, take a screenshot of the post-battle screen, as well as of any ship designs used.

10: If you want to redo your battle, reload your save and remember to type "ai" in console. If you want to share your victory, post in the following format.

RESERVED FOR DETAILS
A 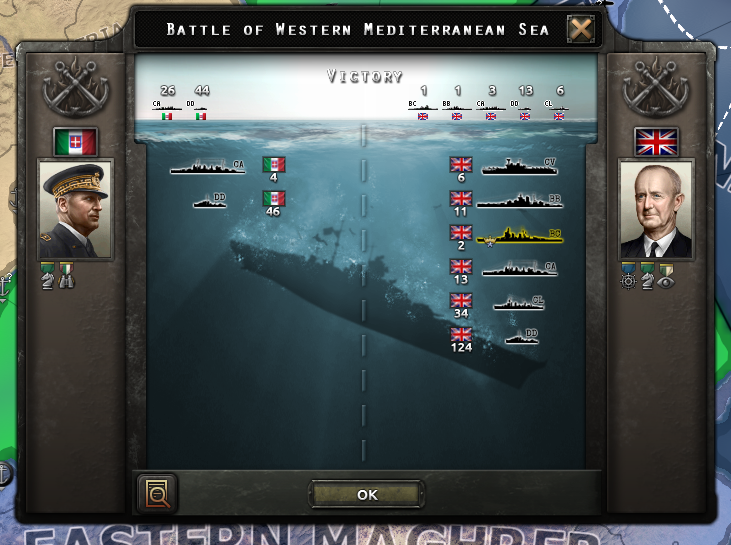 I would love to try this out but my time is lacking.

why 2 guns on dd though? Why no toro dd?

This is basically what I do every time I play ironman historical anyway! Count me interested, I'll do this and post soon.
Toggle signature
Here's a guide below. Refined & made better by @Corpse Fool
Optimal Armor Stat for Tanks in HOI 4
Reactions:
C

Ask me about my Combat Width

I'd been trying different plat builds (without any other awards), and haven't managed to be victorious yet. UK seems to have such a mixed/balanced fleet that it doesn't have many glaring weaknesses to exploit, and having less than half their strength doesn't give us a lot of room.


SHIP DESIGN 1 (SCREENSHOT): This is our Mediterranean Class heavy cruiser


SHIP DESIGN 2 (SCREENSHOT): This is our Adriatic Class destroyer

DEFEAT SCREEN (SCREENSHOT): Aaaaaand..... we got competely wrecked. This would make a great underwater museum for diving tourists in the future.

Corpse Fool said:
I'd been trying different plat builds (without any other awards), and haven't managed to be victorious yet. UK seems to have such a mixed/balanced fleet that it doesn't have many glaring weaknesses to exploit, and having less than half their strength doesn't give us a lot of room.
Click to expand...

Man, this is hard! I tried the meta first, got rekt multiple times, then tried about 10 different compositions with different variants. Included CV, BB, BC, DD swarm... Nothing works! I'm curiously waiting for someone to get plat on this.

Advisors for Navy or Airforce may not be assigned
Click to expand...

Does Navy Chief count as an advisor? Can we at least add a navy chief?
Toggle signature
Here's a guide below. Refined & made better by @Corpse Fool
Optimal Armor Stat for Tanks in HOI 4

I don't think plat is possible (unless you do subs or something). Best I could manage is to reliably some 15 capitals, leaving half of the rest at low HP:

Gold is possible, even without deleting UK air as in example, but needs a bit too much meta for my tastes.
Last edited: Mar 21, 2022
Toggle signature
Starfish Purifiers: making galaxy cute again, one xeno at a time!
Reactions:
A

HugsAndSnuggles said:
I don't think plat is possible (unless you do subs or something). Best I could manage is to reliably sink 10-15 capitals, leaving half of the rest at low HP.
Gold is possible, even without deleting UK air as in example, but needs a bit too much meta for my tastes.
Click to expand...

UK air wasn't deleted, if you kill the carriers without killing any planes they relocate and don't show up in the post-battle screen.But I do think Plat may be impossible atm.

Platinum award was possible in an earlier version of the test, but in this version it does seem impossible. I'll change the 200,000 limit to "impossible" tier and make platinum 225,000, just to see if anyone is actually capable of somehow doing the impossible!

Alexander 'The Grape' said:
UK air wasn't deleted, if you kill the carriers without killing any planes they relocate and don't show up in the post-battle screen.
Click to expand...

My mistake then. Did you catch them during storm or something? It's just that I remember them being pretty annoying damage-wise.
Toggle signature
Starfish Purifiers: making galaxy cute again, one xeno at a time!
A

HugsAndSnuggles said:
My mistake then. Did you catch them during storm or something? It's just that I remember them being pretty annoying damage-wise.
Click to expand...

I think I just fought them in winter, meaning they got fewer sorties due to shorter days.


I wonder if storms are the key to breaching 200k: it neutralises the UK's carriers and slows their screens. If you take Inclement Weather experience, maybe Light Attack builds could kill the UK screens fast enough?

Personally, I love playing for Italy because I always ask myself "What would have happened in history if their performance in WWII had been at least mediocre and not as bad as it really was?"
Returning to the subject of the thread, it is not easy to defeat the English fleet at all, and much less considering the dismal Italian industrial development. There are very few shipyards, few civilian factories, little technology, and to add insult to injury, a few focus trees lacking in revitalizing content to boost the industry.
I really hope, beyond this challenge that you propose, that Paradox gets down to work with Italy, a country with a lot of potential from my point of view.
Reactions:

This fleet barely made it to gold medal despite being the "meta" fleet. It performed worse than your heavy attack CL strategy. Interesting!

All our capitals were taken out but so were their screens.
The last half of this battle was our destroyers torpedoing their remaining capitals which took a few days.

Ask me about my Combat Width

Why one torp module on 40 ships? It's generally more effective to stack attacks onto individual ships than to spread them out across multiple ships.
Reactions:

They have soooo many screens that the time for torpedoes come very late. I wanted survivability on these so I gave single torpedo ships a 1/3 ratio among all screens. Made 'em faster, thus survivable, but weaker. I want more people to share their results, come on and post one of your results!
Toggle signature
Here's a guide below. Refined & made better by @Corpse Fool
Optimal Armor Stat for Tanks in HOI 4
Reactions:
A

I just tested a new fleet design and the new Platinum (225,000) is indeed possible! I'll hold off on posting the designs though, I want to see what everyone else comes up with to breach it.

It's interesting that the "meta" fleet design seems to struggle somewhat against the UK. It makes sense, considering how many Light Cruisers they begin with, there's a ton of screen HP to chew through.
Reactions:

What an excellent idea! Such a fun challenge!
I've been able to beat it with multiple fleet alternatives around ~265k cost range, but I haven't been successful in pushing that cost down.

Takeaways so far:
- visibility reduction stacking with fast ships rules, evading those heavy attacks is key. Not much point in going for other doctrines, really.
- Heavy attack CAs seem to be the right direction to go. It is not surprising at all that the "meta" light attack CAs are not as good. Heavy attack is generally more useful against the Royal Navy which is vulnerable to heavy attack in a way that the meta fleet is not. When the opposing fleet is not very agile, heavy attack is just better value for money. Additionally, Royal Navy is not as well armored and medium guns 3 have enough piercing to do significant damage to their capitals.
- I've been using DP guns rather than secondary 2, with AA being relevant in this fight
- It's been easier to sink all their capitals before tearing their screen down, so I ended up giving up on torpedoes
- It has not been conclusive if CVs are worth it. Gold award Air controller is doable: I've beat it with 365980k fleet with 4CVs in the summer, achieving air superiority and then even doing some damage with my own bombers. I took less total losses in the process and achieved a more convincing victory than with a fleet of the same cost without CVs (in summer). But I haven't been able to push down the cost of this fleet either. So maybe going for air is not worth it and better to fight in winter and give up the air war as others suggested.