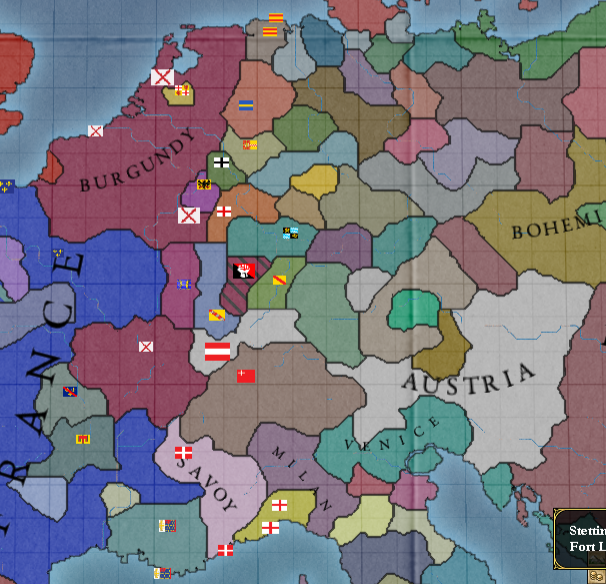 How the Wars started
The dukes of Burgundy had succeeded, over a period of about 100 years, in establishing their rule as a strong force between the Holy Roman Empire and France. Their possessions included, besides their original territories of the Franche-Comté and the Duchy of Burgundy, the economically strong regions of Flanders and Brabant as well as Luxembourg.

The dukes of Burgundy generally pursued an aggressive expansionist politics, especially in Alsace

, seeking to geographically unite their northern and southern possessions. Having already been in conflict with the French king (Burgundy had sided with the English in the Hundred Years' War), Charles' advances along the Rhine brought him in conflict with the Habsburgs and especially emperor Frederick III.
( https://en.wikipedia.org/wiki/Burgundian_Wars#General_situation)

What happened before the game start
Initially in 1469, Duke Sigismund of Habsburg of Austria

, Charles the Bold, to have them protected better against the expansion of the Eidgenossen

(or Old Swiss Confederacy). Charles' involvement west of the Rhine gave him no reason to attack the confederates as Sigismund had wanted, but his embargo politics against the cities of Basel, Strasbourg, and Mulhouse, directed by his reeve Peter von Hagenbach, prompted these to turn to Bern for help. Charles' expansionist strategy suffered a first setback in his politics when his attack on the Archbishopric of Cologne

In a second phase, Sigismund sought to achieve a peace agreement with the Swiss confederates, which eventually was concluded in Konstanz in 1474 (later called the Ewige Richtung). He wanted to buy back his Alsace possessions from Charles, which the latter refused. Shortly afterwards, von Hagenbach was captured and executed by decapitation in Alsace, and the Swiss, united with the Alsace cities and Sigismund of Habsburg in an "anti-Burgundian league", conquered part of the Burgundian Jura (Franche-Comté) when they won the Battle of Héricourt in November 1474. The next year, Bernese forces conquered and ravaged Vaud, which belonged to the Duchy of Savoy

, who was allied with Charles the Bold.
(https://en.wikipedia.org/wiki/Burgundian_Wars#Conflict)

How it ended IRL

In the Valais, the independent republics of the Sieben Zenden, with the help of Bernese and other confederate forces, drove the Savoyards out of the lower Valais after a victory in the Battle on the Planta in November 1475. In 1476 Charles retaliated and marched to Grandson, which belonged to Pierre de Romont of Savoy, but which had recently been taken by the Swiss, where he had the garrison hanged or drowned in the lake despite their capitulation. When the Swiss confederate forces arrived a few days later, he was defeated in the Battle of Grandson, and he was forced to flee the battlefield, leaving behind his artillery and many provisions and valuables. Having rallied his army, he was dealt a devastating blow by the confederates in the Battle of Morat. Charles the Bold raised a new army, but fell in the Battle of Nancy in 1477, where the Swiss fought alongside an army of René II, Duke of Lorraine.

Effects
With the death of Charles the Bold, the dynasty of the dukes of Burgundy died out. The Flemish territories of the Dukes of Burgundy subsequently became a possession of the Habsburgs, when Archduke Maximilian of Austria, who would later become Holy Roman Emperor, married Charles' only daughter Mary of Burgundy. The duchy proper reverted to the crown of France under king Louis XI. The Franche-Comté initially also became French, but was ceded to Maximilian's son Philip in 1493 by the French king Charles VIII in the treaty of Senlis, in an attempt to bribe the Emperor to remain neutral during Charles's planned invasion of Italy.

The victories of the Eidgenossen (Swiss Confederation) over one of the most powerful military forces in Europe at the time gained them a reputation of near invincibility, and the Burgundian Wars marked the beginning of the rise of Swiss mercenaries on the battlefields of Europe. Inside the Confederacy itself, however, the outcome of the war did lead to internal conflict when the city cantons insisted on having the lion's share of the proceeds since they had supplied the most troops. The country cantons resented this and the Dreizehn Orte disputes almost led to war. They were settled by the Stanser Verkommnis of 1481.
(https://en.wikipedia.org/wiki/Burgundian_Wars#Effects)
And now what really happened...
Last edited: Nov 4, 2017
Expand signature
Hercegovina = California

Battle of Franche-Comté (Oct. 1475)
The first battle of the Burgundian Wars was fought at Franche-Comté between Armée du Charolais

With king Charles the Bold and his Armée de Chalon

in Alsace, only 25% of the combined war-power was used in this battle.

Almost double the size, the Burgundians were the victors from the moment they started the march from Bourgogne. And this was demonstrated at the battlefield as well. After crushing the 'Dutch Burghers' Revolution', Charles the Bold took command of Armée du Comté

and dealt heavy casualties to the Austrians. Almost half their original size, they were ready to surrender when the wheel of fortune turned dramatically. In Alsace, Habsburgische Armee

quickly overpowered the rebels and even more quickly stormed the fort effectively occupying the province, which was clearly Austrian goal from the start of the Wars - to get Alsace back. That out of the way, Friedrich V marched strait for Franche-Comté to aid his army in trouble. Seeing the danger of getting his army annihilated by the vast Austrian forces, Charles the Bold ordered a retreat - to Alps!

While the winning Kaiserliche Armee

moved on to Bourgogne, the Burgundian capital, the Armée du Charolais

retreated to Fribourg in Switzerland to avoid facing an enormous war force of Austria. However, the conflict was inevitable.

And so was the defeat. It didn't take very long for Friedrich V's men to rob the Burgundians of that little morale they had left after the long march through the Alps. Though being the first army to arrive in Switzerland and having Charles the Bold with them, helped to better fortify their defensive positions and deal as much damage to the enemy as possible. On the brink of annihilation, Burgundians retreated once again and even deeper into the Alps — to Bern, where they would be decisively defeated and disbanded.

joins the Wars on Swiss side and uses all of their 7,000 men to siege Cuneo, Savoy

Besieging of Switzerland
With the Austrians focused on Franche-Comté, Bourgogne and Switzerland, Burgundy used the opportunity to make advancement in Alsace and Lorraine. The success, eventhough very limited, forced Austrians to give those regions more attention. And what an attention it was! In the matter of days Habsburgische Armee

stormed through the region and destroyed anything that was Burgundian. This would come at a great cost for them, though. Reduced to about 30,000 men (35% strength), after their fights in Alsace against rebels, battles in the severe winter conditions of the Alps and eventually in Alsace and Lorraine against Burgundians, they were forced to stop and regroup. The army was station in Sundgau, Austria through October 1476.

This gave Charles the Bold a great opportunity to gain territories in both Switzerland (Zürich, St. Gallen, Chur) and Alsace and Lorraine (Metz), while having the rest of the provinces under siege. Apart from Alsace which was conrolled by Austria almost from the beginning, Austrians managed to gain control over Bourgogne as well.
Expand signature
Hercegovina = California

Treaty of the Free County (Nov. 9th 1476)
The turning poing of the Wars was surely when Hungary

(and their vassal Transylvania

) honoured the Burgundian Call to Arms. By the time Habsburgische Armee

even partly regained their strength, their territories east of and in the Alps were well under siege by these two Hungarian countries.

With both Burgundy and Austria having their ability to recruit new regiments reduced to bare minimums, the two kings decided to settle their dispute at the round table in Besançon. As the effect of the treaty, Burgundy released Alsace which would become Austrian protectorate. In return Burgundy gets leeway to subjugate first and foremost Lorraine

, as well as Switzerland

. One other important effect of an early truce is a quicker regaining of war capacity for the unsettled conflict with the French.

The alliance with the Hungarians remains an important leverage for Burgundy in any future conflict with Austria (regaing Alsace) and the Holy Roman Empire altogether.

Death of Marie I
A hunting accident proved to be lethal for Marie, a beloved heir to the throne of Burgundy. Still, as a true good king, Charles the Bold wasted little time on mourning, just 9 months after the tragic event, Philippe was born, a future leader of a glorious nation.
Last edited: Nov 4, 2017
Expand signature
Hercegovina = California

Capitulation of Lorraine (Aug. 1st 1478)
Austrian armies removed from battlefield and their provinces of Metz and Lorraine occupied by Burgundy meant unconditional surrender of Lorraine and their king René II de Vaudémont becoming a vassal of Burgundy with great prospects of a soon annexation.

Milano Treaty (Apr 30th 1479)
Without a proper fleet to transfer troops to Corsica in order to occupy all the provinces, Burgundy signed treaty with war exhausted nation of Milan

under the condition of releasing Corsica

Military Drill
The Burgundian Wars provided a valuable lesson for the generals on armies' tactical strengths and weaknesses. With the cessation of fighting, king Charles immediately sought to establish a system of training that would equip soldiers with basic tactical knowledge thus enabling them to stay longer on the battlefield. It wasn't long before our men were drilled to match the highest standards of European armies such as French, Austrian, Bohemian and Ottoman.
Expand signature
Hercegovina = California

was forced to unconditionally surrender. By the treaty, Burgundy

gets Freiburg, their first territory in Rheinland that would serve as a stronghold for further expansion into rich German lands. Switzerland would become a vassal and break their ties with Austria

once and for all. The unsettled dispute over Alsace

(both now being a vassal of Austria and Burgundy, respectively) would mean further conflict in this region between the two superpowers of the time. The French War of 1485 would, however divert Charles' attention westward for awhile, in a glorious victory that would become the corner-stone of the Burgundian Empire.

and their subjects over the Burgundian claims on Champagne, Caux and Lyonnais. By June 1486, French forces were practically totally destroyed when Burgundian armies led by general Hughes de Villaines earned a decisive win in The Battle of Nemour on June 28th.
Effects
In the peace treaty, Burgundy gained the claimed territories of Champagne, Caux and Lyonnais, as well as counties of Bourbon and Auvergne. Devastating victory would set up decades of peace between the two nations.