Excellent read! Really love the AARs that are heavy on the gameplay and light on the expose!

Regrettably, this AAR finishes here, as I am very busy atm. I have changed job, town and country, and have new responsibilities.

Anyway, it is of limited interest now, as HoD is out now. Thank you for following.
Toggle signature
Completed (EU IV, 1.28.3) : Succeeding with Ottomans playlist (Completed)

Read my Victoria 2 analysis threads to learn more about the game.

That is sad. Good luck with your other interests, though. Of course real life always should come first, so there's no need to apologise.

That said, considering this went until 1943 I think you've definitely performed above and beyond the call of duty! Thanks, diegoami. I enjoyed this very much.
Toggle signature
⋆ ⋆ ⋆ A PEOPLE'S HISTORY OF THE COMMONWEALTH OF BRITAIN ⋆ ⋆ ⋆
Echoes of A New Tomorrow: Life after Revolution, 1925–69 ⋆ After the Echo: Crisis and Renewal, 1969–93 (Coming 2021!)

It would have been an interesting story to tell. I stopped playing in 1966.

My attempt to get Galicia from Spain had been frustrated, as UK joined the war at their side. After a long and bloody war with the UK, where I couldn't get any advantage, I had to concede a white peace, which cost me a lot of prestige as I couldn't achieve my war goal.

Meanwhile France and Austria got severe beatings and lost provinces. France is a failed state, it experienced several coups and is now a Fascist Dictatorship.

Brazil became a GP again for a while, so I lost it as a satellite but I got it as a sphereling.

Anyway, new powers are rising, notably China. Portugal has been relegated to the #7 spot.

So, frustrated, I stopped playing... a while ago. 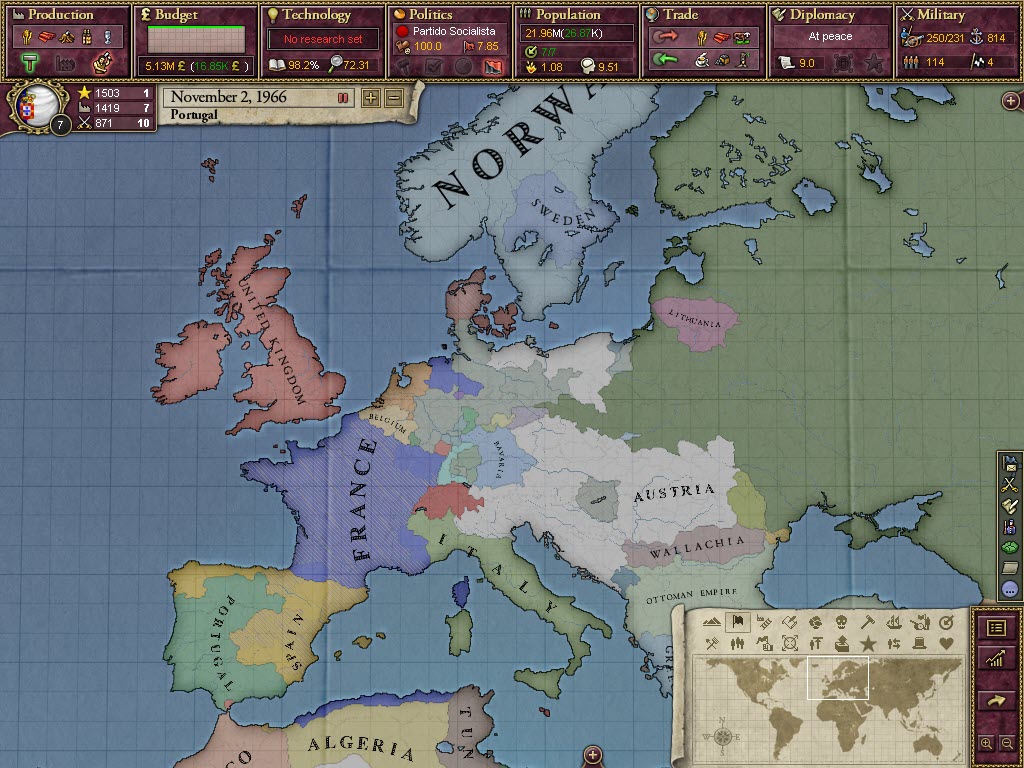 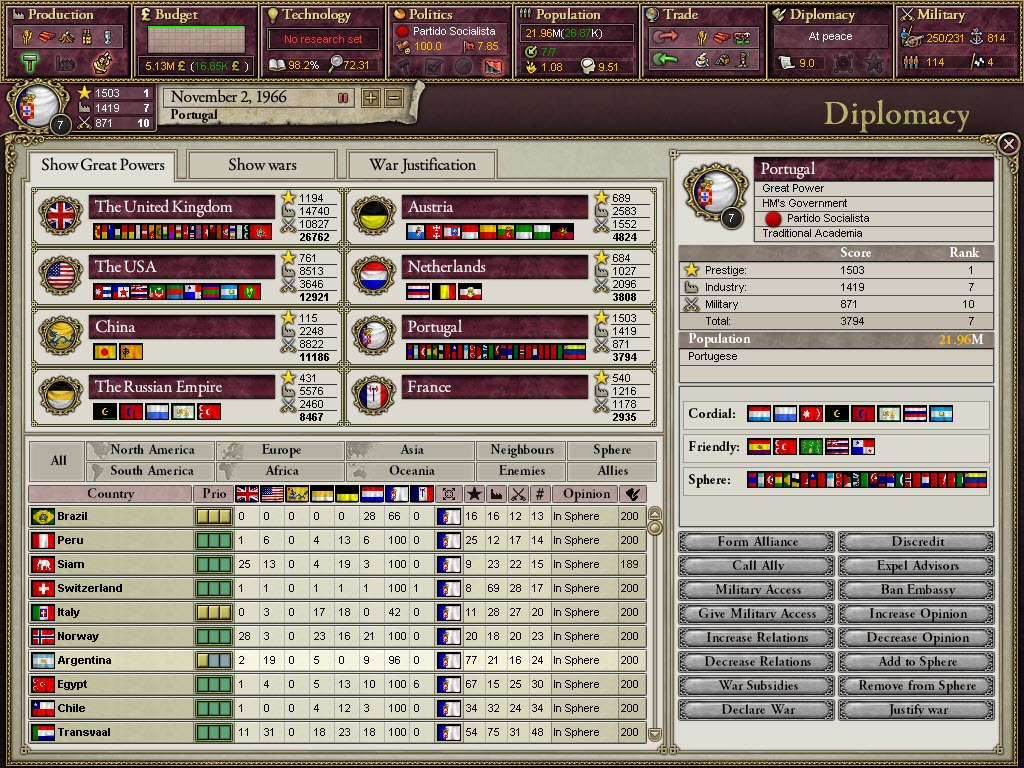 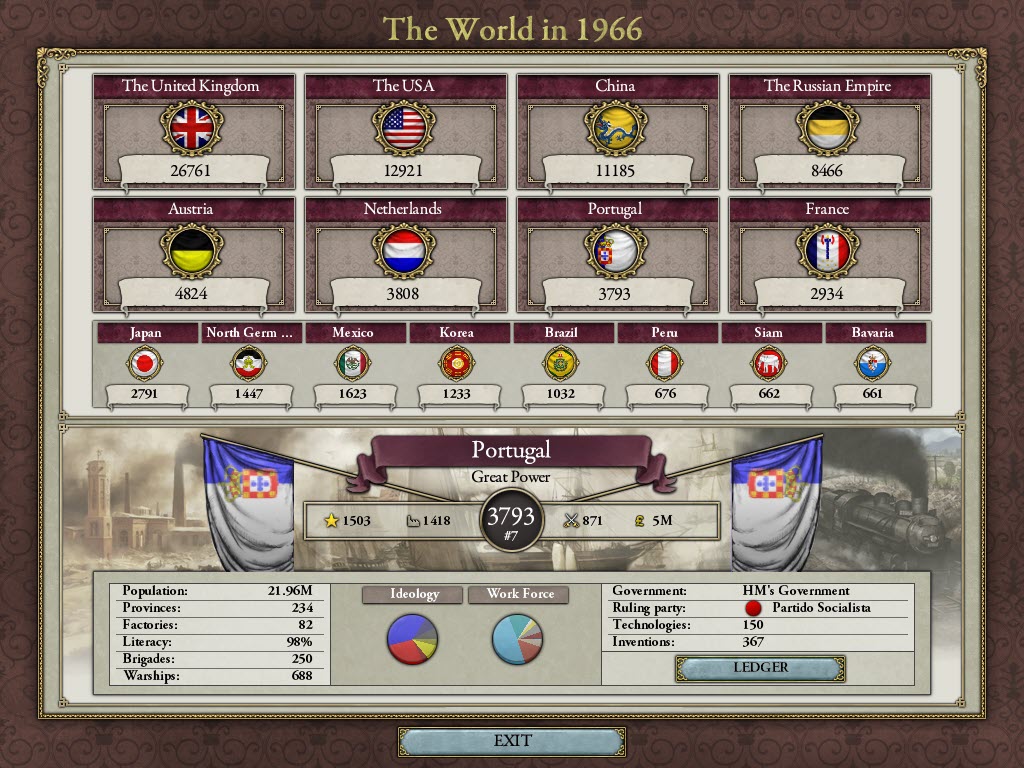 Read my Victoria 2 analysis threads to learn more about the game.

Hey thanks for this awesome AAR. Very beginner friendly. I think its really helpful in helping me learn how to play V2. I've had difficulties understand the game. I'm looking forward to reading the whole thing

I have been trying to play along with ur ARR to learn what to do but I have something I dont' really understand. I can't seem to get my soldier POP up no matter what I do. I have both NF on soldiers in my most populated states and have military spending up high. It doesn't seem like my soldiers are just all promoting to officers because I only have about 700 officers and 20000 soldiers of which apparently only 5 brigades can be formed. I also have taxes for the poor set to the max trying to demote them to soldiers. I can't tell what else I could do to convince the people to become soldiers -,-
Last edited: Sep 27, 2013

The aar was really good. I was surprised you went so far in V2, rather than convert to HOI3, but I enjoyed following it.
Toggle signature
Patience my ass, I want to go out and kill something!
Show hidden low quality content
You must log in or register to reply here.
Share:
Facebook Twitter Reddit Tumblr WhatsApp Share Link
Top Bottom