Jump to latest Follow Reply
Menu
Install the app
You are using an out of date browser. It may not display this or other websites correctly.
You should upgrade or use an alternative browser.
Stellaris 46871 Bug Reports 27004 Suggestions 16421 Tech Support 2584 Multiplayer 358 User Mods 4415 Stellaris AAR (After Action Reports) Console edition 1119

Part 1 - the problems
The way assimilation works today is not good enough, there are several problems with it and the only empire type it currently makes sense for are Driven Assimilators. Normal empires that can assimilate have many problems with assimilation because it goes directly against everything else they can do and doesn't make sense from an RP perspective either.

Problem 1) You can only assimilate a set number of pops per year, yet ALL pops are made unemployed. This creates a FALSE information in the outlier about availability of jobs and messes with your economic planning.

Problem 2) If you have a specific citizenship type planned for an alien then assimilation currently interferes with it, your only answer is to manually set their rights again

Problem 3) It directly interferes with the roleplaying aspect of the game, how can you be a xenophilic egalitarian democracy that forces people to undergo life altering surgery?
If you are egalitarian or xenophile it forces you to roleplay directly opposed to that. And if you're xenophobe or authoritarian it frees your slaves from bondage against your will. Both sides lose. 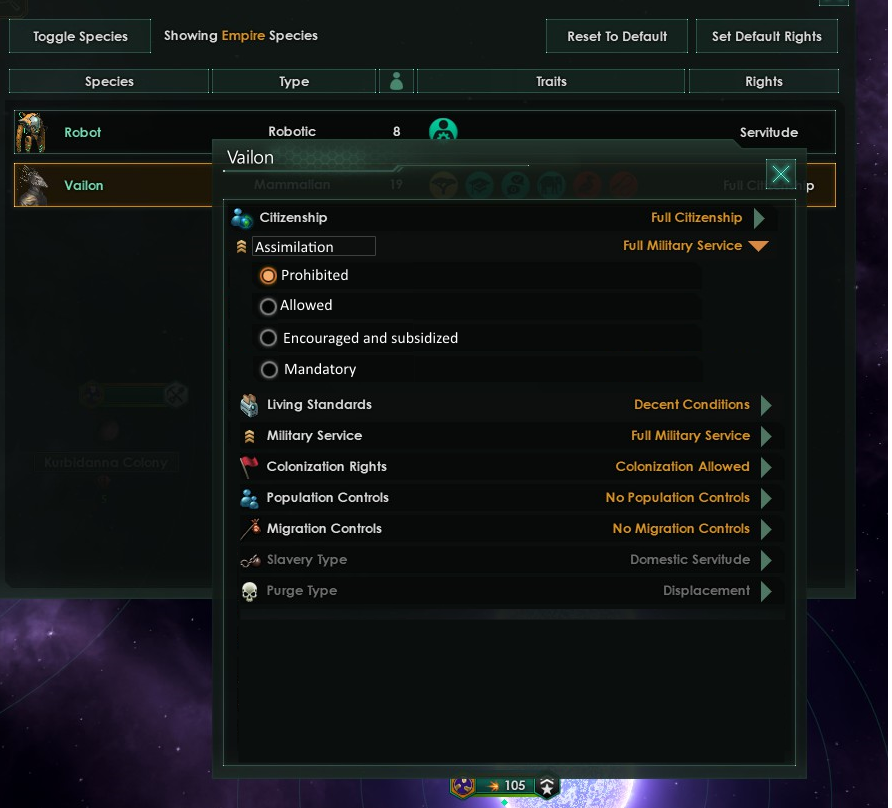 Bump, as this was linked elsewhere and is a damn good idea.
Toggle signature
Pharma and Medical MegaCorps
G

a really good idea for everyone that isn't catalog indexes and hive minds.
Reactions:

I especially like this as assimilation ceases to be a citizen right, so I don't need to pick a new default right, reset everyone to default, and then try to convince the game that people who are already assimilated don't need to be assimilated again, and also, I am a slaving empire, so those newly assimilated cyborgs should still be slaves, just better because of their new enhancements. It would also be nice to have the assimilation type be choosable, so you can choose to assimilate pops just to cyborg if you have gone full synth ascension. A bio-assimilation would also be nice to push newly aquired pops to a specific subspecies.
Toggle signature
"When the Stars threw down their Spears"
Reactions:
N

Assimilation needs to be reworked and combined with gene editing in my opinion.

Both of them have awkward interfaces and poor control.
Reactions:

I dunno if the maker of this thread is still around years later, but they should probably preface this suggestion with what exactly is the problem they're seeking to fix. WHY is the current system bad.
Toggle signature
Fleet Attachments Suggestion

shadowclasper said:
I dunno if the maker of this thread is still around years later, but they should probably preface this suggestion with what exactly is the problem they're seeking to fix. WHY is the current system bad.
Click to expand...

the current implementation has assimilation as its own job and stratum, which I think works fine for driven assemilators. on the other hand, if I want to share the gift of psionics with my xenos, They all stop working their jobs for several years. spreding psionics thus gives way too much short-term economic pain.
Reactions:
D

Well your ARE giving them an entirely new education.
Although there are students who also do some work, they are mainly occupied with learning.
And that is asuming, that you can simply learn how to unlock psionic powers and dont need external help in doing so from specially trained personal

shadowclasper said:
I dunno if the maker of this thread is still around years later, but they should probably preface this suggestion with what exactly is the problem they're seeking to fix. WHY is the current system bad.
Click to expand...