Look at his mess: 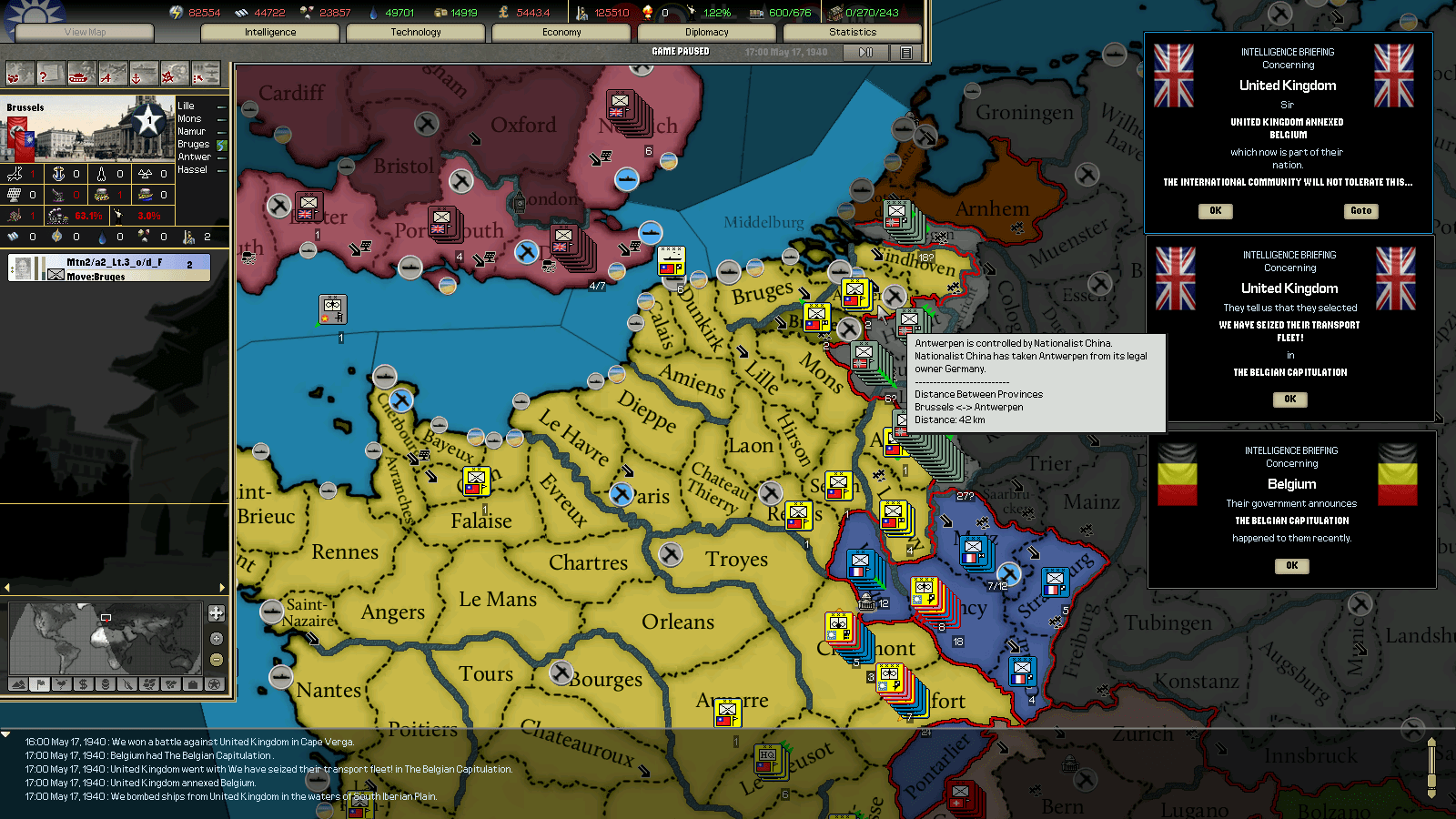 I can't believe that the developers didn't think about the imminent danger of Belgium getting conquered via the Mediterranean Sea and thru all France by National China!

Nevertheless this is an awkward situation. China (yellow) controls both VP-provinces of Belgium: Antwerpen and Brussels and was just 2 weeks shy of conquering also the last Belgian VP-province which is the rather remote Leopoldville in Africa. And then, triggered by Germany conquering the last free Belgian province in Europe, unfortunately the Belgian Capitulation triggered which again triggered the annexation of the Belgian colonies by the UK and... giving all European Belgian provinces to Germany. But since those provinces were already occupied by China, now China occupies German provinces. Weird situation. In this game China and Germany are neither allied nor at war. At least it not also triggered an immediate war declaration against China by Germany whose generals are bewildered enough that their whole Blitzkrieg just got as far as... well, not into a single French province. Instead they proudly conquered and annexed Luxembourg.

To my surprise I wasn't really able to find the event or code responsible for giving the ownership of Belgian provinces to Germany. While I am playing EoD, I think the event responsible isn't a unique EoD-event but rather one carried over. Does anybody know which event it is, perhaps even the event-ID, and where it can be found?
Last edited: May 23, 2021
Toggle signature
Darkest Hour: How to build a powerful Navy from nothing: Operational Example

Found the following lines in the "UK" events file (/Mods/Edge of Darkness/db/events). I confirmed the same file (and Belgian Capitulation events) are in the DH full folder, so the event from your Nat China playthrough likely originates from HOI2.

Here's the data from the EoD UK events file (snipped):

Ah, thanks.
I had actually looked at them before but with a tunnel-look for provincenumbers and thus missed those important 2 lines:

There it is, where all of Belgium + Luxembourg, regardless of the status of the VP-provinces, gets transfered to Germany.

Peculiar that the trigger is only that those provinces aren't controlled by Belgium anylonger instead of Germany having actual control over them.

And yes, a few game-days after I wrote above post, all Belgium got transfered to Germany and my brave Chinese division stratdeployed around the globe to Nanjing. Well, Belgium, NL and Luxembourg to Germany, France to China... I can live with that.
Last edited: May 25, 2021
Toggle signature
Darkest Hour: How to build a powerful Navy from nothing: Operational Example
Reactions:
Show hidden low quality content
You must log in or register to reply here.
Share:
Facebook Twitter Reddit Tumblr WhatsApp Share Link
Top Bottom