Jump to latest Follow Reply
Menu
Install the app
You are using an out of date browser. It may not display this or other websites correctly.
You should upgrade or use an alternative browser.
Crusader Kings II 69415 Bug Reports 19652 User Modifications 10445 Suggestions 5853 Tech Support 6309 After Action Reports

It's been a while since the last dev diary, but now would be a good time to recap everything that's included in the Renaissance so far, because of yesterday's update. Here is a comprehensive list of what Renaissance content is currently included in the mod:


So, how exactly does the Renaissance spread? The Renaissance starts off active in Florence (Firenze) in 1400, and will spread relatively quickly throughout northern Italy. Rulers may take the decision to Embrace the Renaissance (requires 8 learning), which will give them access to Renaissance decisions and events.

When enough rulers within a realm have taken the decision to embrace the Renaissance, the realm will become a "Renaissance realm", which comes with some flavour and allows rulers within that realm to take the decision without needing to fulfil other requirements (which are more complicated, but essentially, they make it spread more quickly within Italy compared to the rest of Europe). 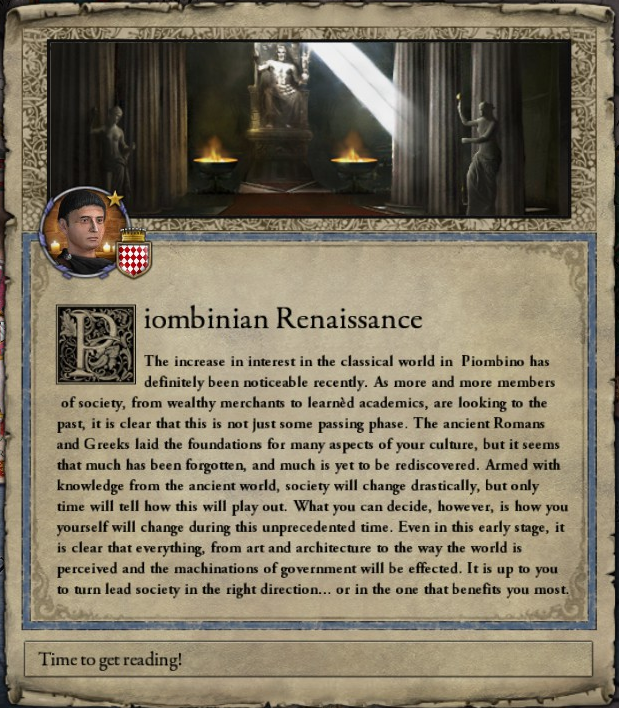 Once you have enough wealth, you will be able to employ people to carry out various Renaissance-related work, whether creating pieces or researching the old ways.

Patronising Renaissance Research will allow you to support Renaissance men in rediscovering the past, which will unlock milestones of the Renaissance. While this is only in its early stages, it will soon encompass breakthroughs in art, architecture, literature, sculpting and more, allowing Renaissance rulers to commission more impressive objects. For example, the two areas you can research are art and architecture. 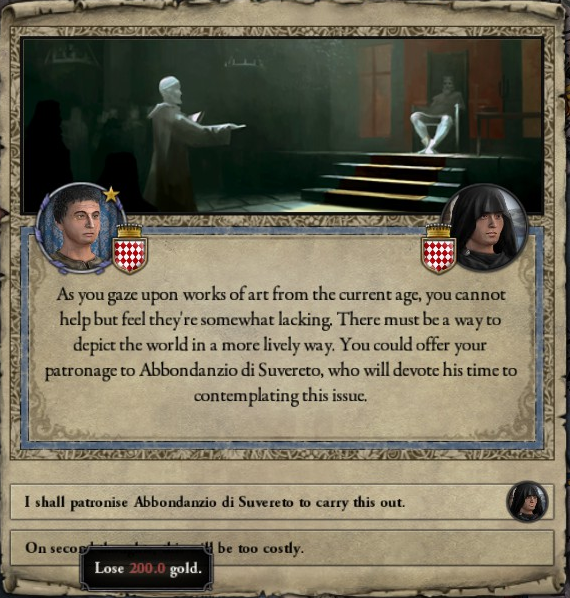 The intention is for these event-chains to lead to various potential discoveries, but for now, the art path will always lead to the discovery of linear perspective. 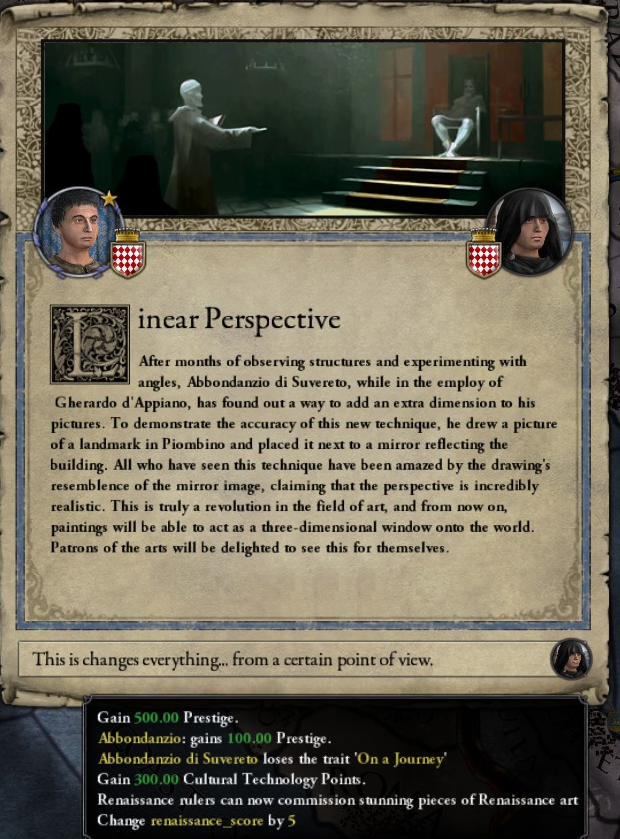 There is a lot of potential for advancements in the Renaissance, and they are certain to bring prestige to those who discover them. More advancements will be coming soon!

You will also notice the renaissance_score at the bottom. Apart from that being an oversight and something that needs to be hidden, it provides the opportunity to talk about becoming a renowned Renaissance Ruler. To do so, you have to do more than commission a couple of portraits for your private collection. Someone who devotes their rule to promoting and enhancing Renaissance culture will gain the trait "Renowned Renaissance Ruler". Different actions will give a different "renaissance score". A normal classical portrait will, for example, earn you far fewer points than patronising the man who makes a major breakthrough in architecture. 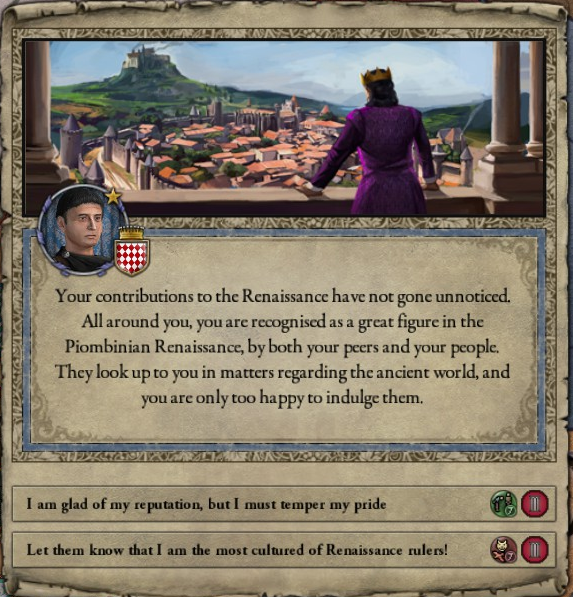 This is more of a rare event which will generally not succeed, but occassionally there will be an uprising of Italian peasants claiming to be the "true Romans". Should they succeed in securing their independence, they will receive a claim on Rome, and could eventually found a new Empire! 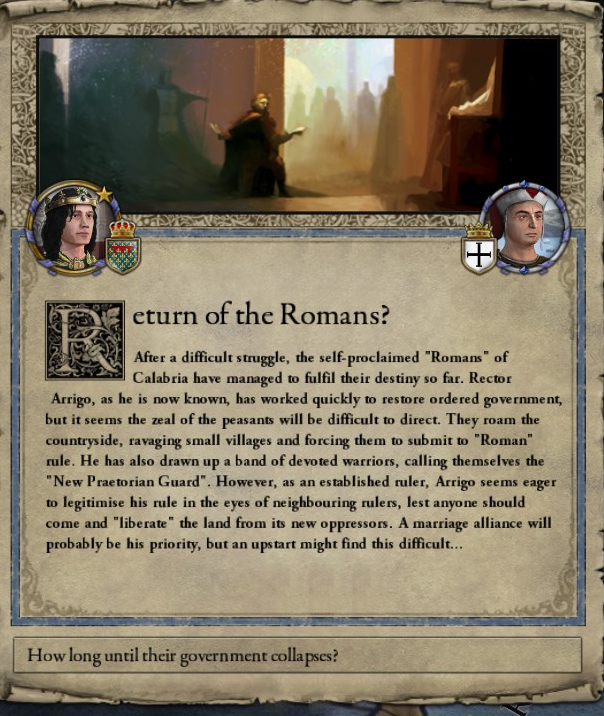 We now also have some great-looking Coats of Arms thanks to Pied-Noir, who has done more work of a similar kind in his own mod Toto Improvement Project [TIP]. However, this means it is not compatible with Patrum Scuta, but it is worth it for the new title and dynasty Coats of Arms. Here are a few examples:

They are more historically-accurate for the era, and they higher-quality than the vanilla CoAs, which adds to the immersion of this mod.

What else has been done in this update? We have fixed a couple of provinces which were missing rulers in an area we had already covered, and Bosnia has been fixed so that there are several feudal vassals to the king now. There have been many fixes to historical families, also thanks to Pied-Noir, which means there are not so many broken dynasty trees!

That's all for this week's update. I hope you enjoy the extra content and are looking forward to more!
Toggle signature
CK2 Mods:
- Beginning of the End: A 15th Century Mod for CK2
- IMPERIVM NON MIHI EST
- Rename Titles
Reactions:

Wixelt said:
Do you really need to keep making new threads for every dev diary?
Click to expand...

Sorry, I didn't realise there was a better way to do it. How would you recommend I add new dev diaries?