Jump to latest Follow Reply
Menu
Install the app
You are using an out of date browser. It may not display this or other websites correctly.
You should upgrade or use an alternative browser.
BATTLETECH 5481 BATTLETECH Bug Reports 3773 BATTLETECH Suggestions 1567 BATTLETECH Mod-forum 684 BATTLETECH Universe 245 BATTLETECH Fan art, fiction & creations 163 News and Updates Archive 129 BATTLETECH Multi-player 104
Show only dev responses 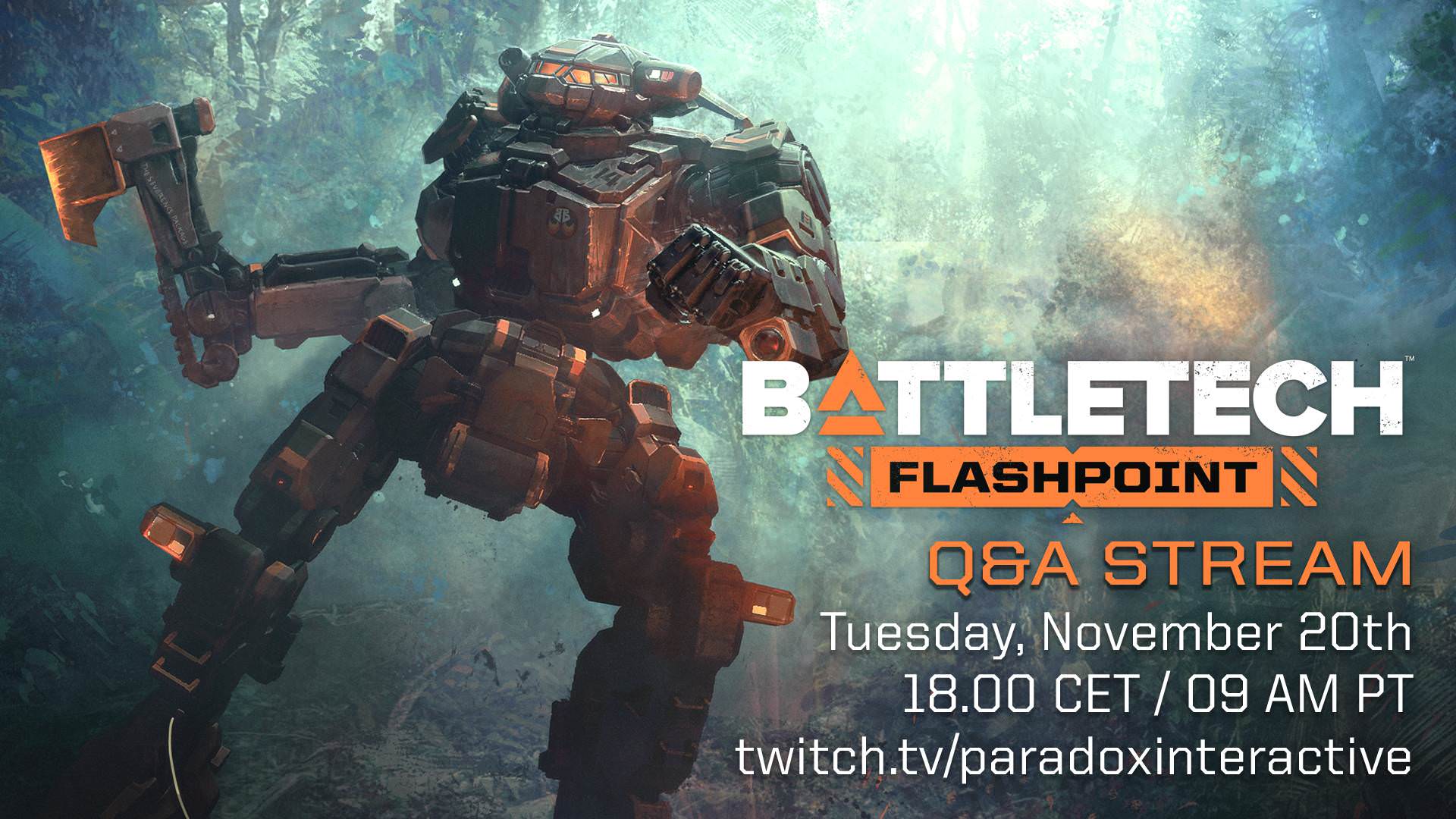 Next week we are releasing the first expansion for BATTLETECH: Flashpoint! (Just 8 days left but who's counting...)

We are super excited to continue to share BATTLETECH with you and would like to give you the opportunity to ask all the questions you might have about Flashpoint.

Please use this thread and we will try to answer as many questions as we can on our official Q&A Livestream on Tuesday, November 20th, 18.00CET / 09 AM PT.

So tune in at twitch.tv/paradoxinteractive, ask your questions and be ready for Flashpoint!

Cheers,
Emma
Toggle signature
Be the person your dog thinks you are

“Don’t worry about the world coming to an end today. It’s already tomorrow in Australia.”​

Why is there, to date, no improvement, update, support or even an official word about Multiplayer since the announcement of the cut of MP?
Toggle signature
Otherwise known as "Legendkiller". "Beyond Valhalla." - Prussian Havoc.

What was the decision process for the addition of more mechs? I basically want to know why these specific Mechs were chosen over others which were/are presumably available.
Last edited: Nov 19, 2018
Toggle signature
Otherwise known as "Legendkiller". "Beyond Valhalla." - Prussian Havoc.

Why was the Hatchetman realized? I realize it is popular Mech but given the fact that there's lots of game-improvements and or mechs that could have been added/worked on why was it prioritized?

After all the denial it was a bit of a surprise for me to hear that you've gone ahead and designed a mech from scratch tbh. Even more so the timing - a completely new mech in the very first (big) update!?

Also, why not the Scorpion over the Hatchetman? Just out of curiosity.
Last edited: Nov 19, 2018
Toggle signature
Otherwise known as "Legendkiller". "Beyond Valhalla." - Prussian Havoc.

Any chance to implement autosave system during battles? Way too many times game crashed after battle was completed, so i had to replay the whole battle (this way, i would only have to replay last turn)

or at least, do the saving after battle, before salvage is assigned? usually game crashes after salvage assignment, during loading screen.

(and yes, i did report the crashes several times, sent logs etc)

1. In Career mode, how often we will meet contracts from Flashpoint, if you take 1200 days. The frequency of their generation is interesting.

2. Contracts with limited tonnage will be only in missions to capture points in time?

3. Will the Cyclops have anything to do with his high-powered electronics?

1) How fast does the difficulty ramp up? Is a half-skull added to every system on the map whenever your MRB rating goes up one star?
2) Are system difficulties randomly distributed, or are there clusters of the same level like in the single-player campaign?

What is the possible spread of your random starting pilots?
In the demo stream, there seemed to be a very wide variation in the starting pilots. Some of them seemed to be 2/3/3/3 and others seemed to be 4/5/6/8.
That's a huge difference. Almost like between the beginning and mid-to-late stages of your pilots in the campaign.
N

Will HBS return to do another round of Kickstarter for the potential next major Battletech game after the expansions?

What level of detail will the Flashpoint Editor include?

1 ) Will it allow the selection of a specific mission like "Hostile Acquisition" or just Ambush Convoy type
2 ) Can the forces in a mission be overridden? Additional forces or fewer? Specific lancedefs? Specific Mechs?
3 ) Can the Map be chosen?
4 ) Can the Biome be chosen?
5 ) Can we choose to have the Flashpoint occur on a specific world?
6 ) How many missions can be strung together? Two is the minimum obviously. What is the maximum?

Anything else you want to add in terms of answering something I haven't asked?
Toggle signature
I stop reading the moment I encounter the phrase, "In real life", when talking about BattleTech.
Useful Links
By Jade_Rook: LRMs, Clustering, and Head Hits

While Infantry fell to the cutting room floor for BATTLETECH's Launch, has Team HBS been working on a means to implement it for the URBAN WARFARE expansion?
Toggle signature
If you know the enemy and know yourself, you need not fear the result of a hundred battles ~ Sun Tzu
Join your fellow BATTLETECH gamers in a Tournament, IWS League, Friday Night Fights, Command Academy and BT Discord.

During a past HBS video, Kiva mentioned that Connor was working on a very large BATTLETECH Multiplayer Arena Map, is such a map more likely to make it into Update 1.3, FLASHPOINT, URBAN WARFARE or some other update or expansion?
Toggle signature
If you know the enemy and know yourself, you need not fear the result of a hundred battles ~ Sun Tzu
Join your fellow BATTLETECH gamers in a Tournament, IWS League, Friday Night Fights, Command Academy and BT Discord.

1) Is it possible to run into the same Flashpoint more than once per campaign?

2) How random will the elements of a Flashpoint be? e.g. will it use a fixed map or randomly select one from a pool, will opfor and/or difficulty change, &c.

What was the decision regarding the Computer in the Cyclops? What does it do?

Is there a "Hatchet" model so the weapon can be added to other Mechs via modding?
Toggle signature
I stop reading the moment I encounter the phrase, "In real life", when talking about BattleTech.
Useful Links
By Jade_Rook: LRMs, Clustering, and Head Hits

How did the process for writing the branching Flashpoints differ from writing the linear main story?

How easy to use is the Flashpoint Editor? Will there be any kind of guide or documentation to go with it?

Now that we're through that, my other concerns revolving around Things We Cannot Talk About pushed to the wayside . . . I have three questions.

First. We know there is a skill rebalance being done, but will the campaign story missions and other designed materials be tweaked to account for the changes?

Second. As pleased as I am to see the Hatchetman, I must admit the design and the integration of the Hatchet as a non-exchangable part is problematic for me. (Maybe because the Axelas on Zathraa is on my mind.) What was the rationale for the Hatchet being restricted this way?

Lastly I am pleased to know we get a purely sandbox mode with Career Mode. However this also means certain items which are somewhat Spoileriffic won't be guaranteed, so my question likes in the ability to get those in other fashions in Career Mode - can we, or does Career Mode preclude these items from ever being available?

Thank you for your time.
Toggle signature
"White Reach" on WorldAnvil: [Link] - Where all my fiction revolving around BattleTech, and the campaign logs for White Reach now reside. Work in progress.
Career Finished. [Link] Warning: Player sucks pretty bad, maybe worse than Mitch. Incomplete run due to technical issues, another is on the way "soon".
HBS BattleTech Google document: [Link] - Compiling data from the game.

Running BattleTech on a HP-110-194 and all I got was this lousy forum signature.

Kereminde said:
...Second. As pleased as I am to see the Hatchetman, I must admit the design and the integration of the Hatchet as a non-exchangable part is problematic for me. (Maybe because the Axelas on Zathraa is on my mind.) What was the rationale for the Hatchet being restricted this way?..
Click to expand...

Marco Mazzoni did comment about this in his Dev Diary for the Hatchetman (#6)…
https://forum.paradoxplaza.com/foru...diaries-6-the-making-of-a-hatchetman.1127078/

"Another constraint was that HBS did not want the hatchet to be construed to be utilizing some sort of new “handheld melee weapon system”, so the ‘Mech couldn’t look like it was actually “holding” a hatchet. For the first round of sketches, they wanted to try having it integrated into the forearm." - Marco Mazzoni: Dev Diary #6
Toggle signature
"By destroying Clan Smoke Jaguar, the Star League taught all the Clans the true horrors of war as it is practiced in the Inner Sphere...Elite, vat born, bred for battle, Clan forces were defeated by the common Freeborn hardened veterans of the Inner Sphere. They are the TRUE MechWarriors." - Narrator: MechWarrior 3 - Ending
Show hidden low quality content
You must log in or register to reply here.
Share:
Facebook Twitter Reddit Tumblr WhatsApp Share Link
Top Bottom