Menu
Install the app
You are using an out of date browser. It may not display this or other websites correctly.
You should upgrade or use an alternative browser.
Imperator: Rome 8638 Bug Reports 3591 Suggestions 2324 User Mods 589 Tech Support 484 Multiplayer 54 After Action Report (AAR)
C

I always wanted to do a Babylon run and the latest Marius update seemed the perfect occasion to attempt it. The start is relatively slow as the Seleucid empire (and Bactria!!) can be challenging to take down with Tylos. I was going for a tall play once Mesopotamia under control with large client states. But around 620 I did the mistake to test out the imperial challenge casus belli on Rome. My vassals conquered horrible borders for me so I had to transform the game into a gigantic conquest. 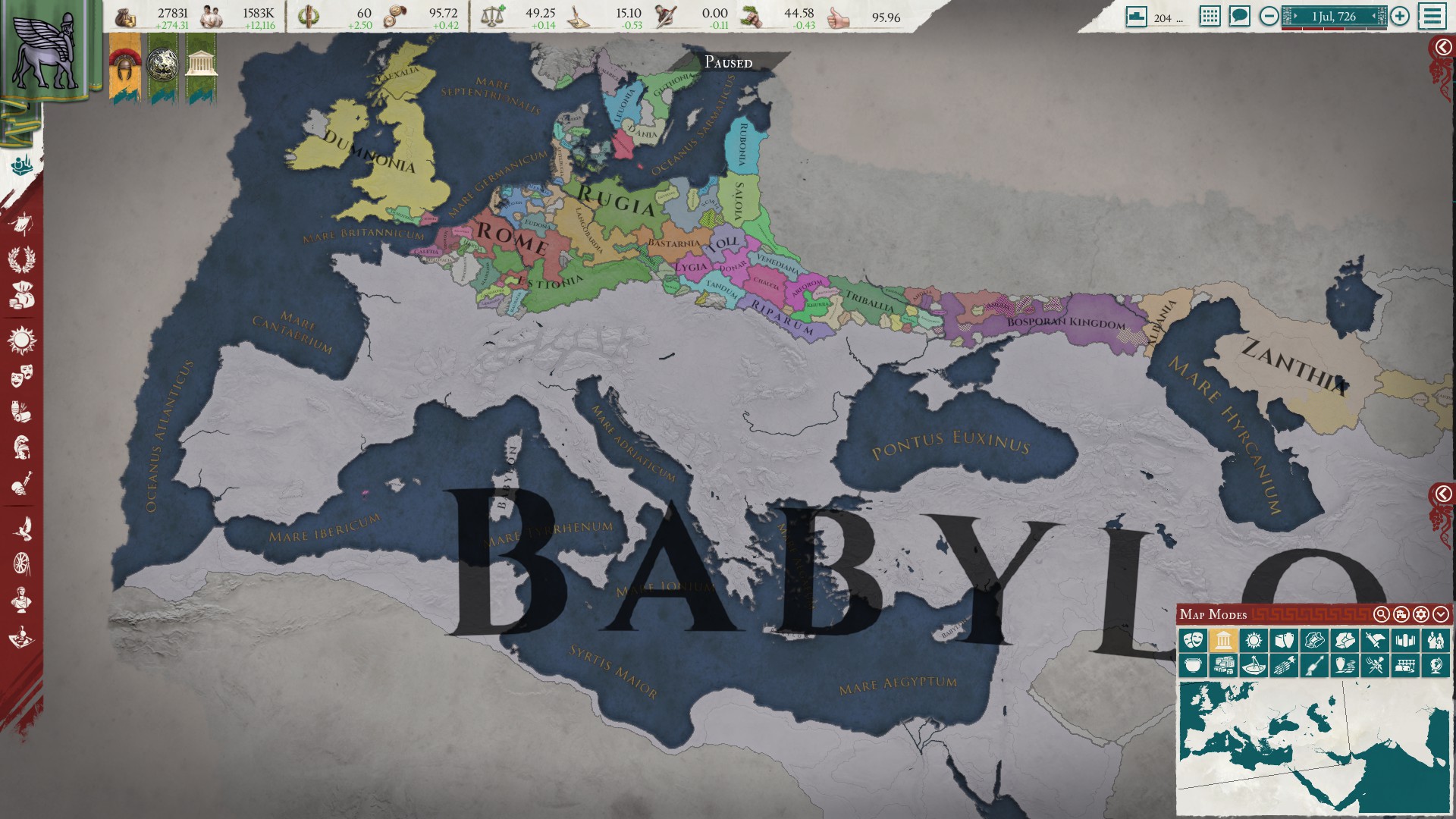 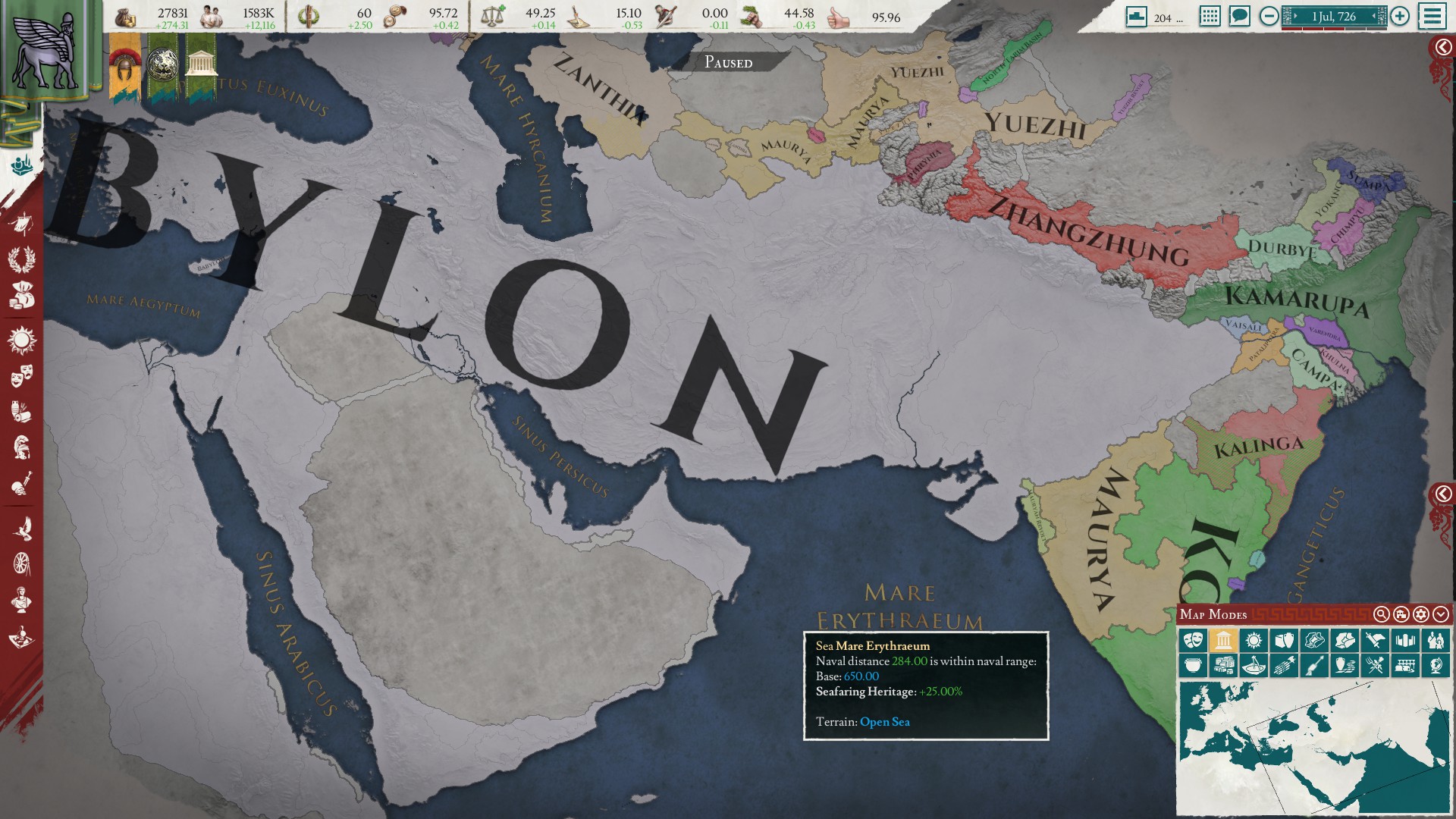 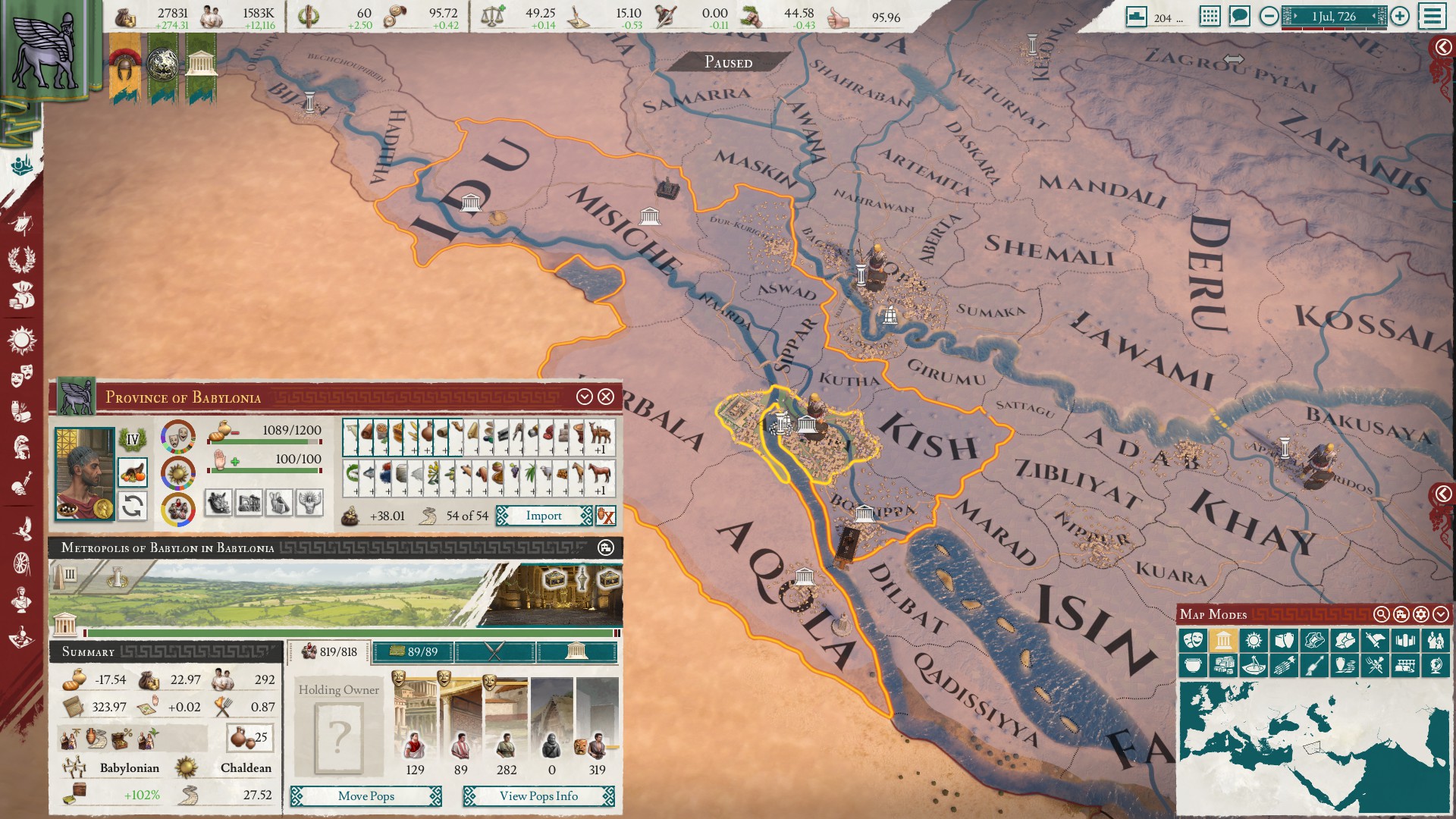 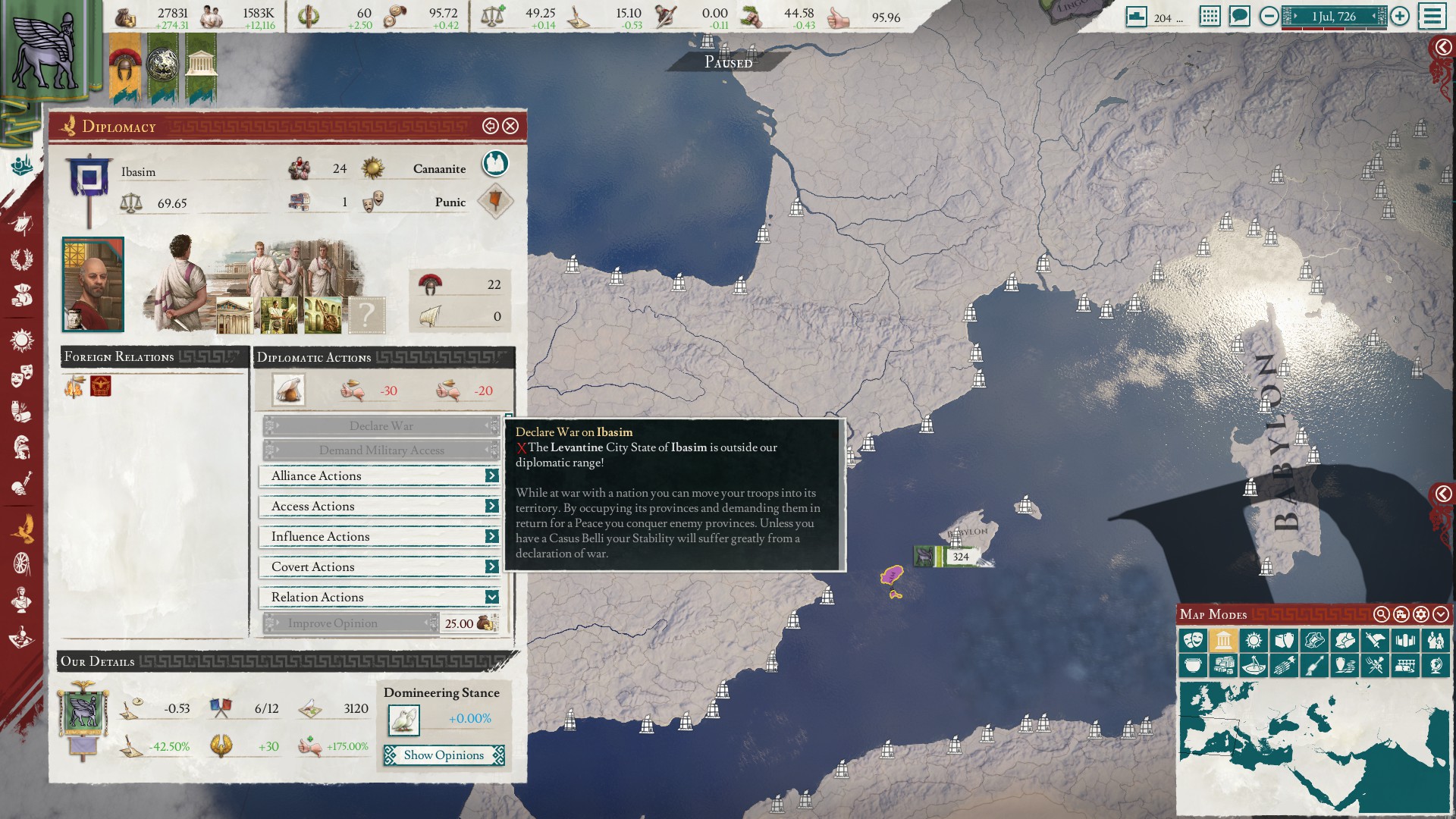 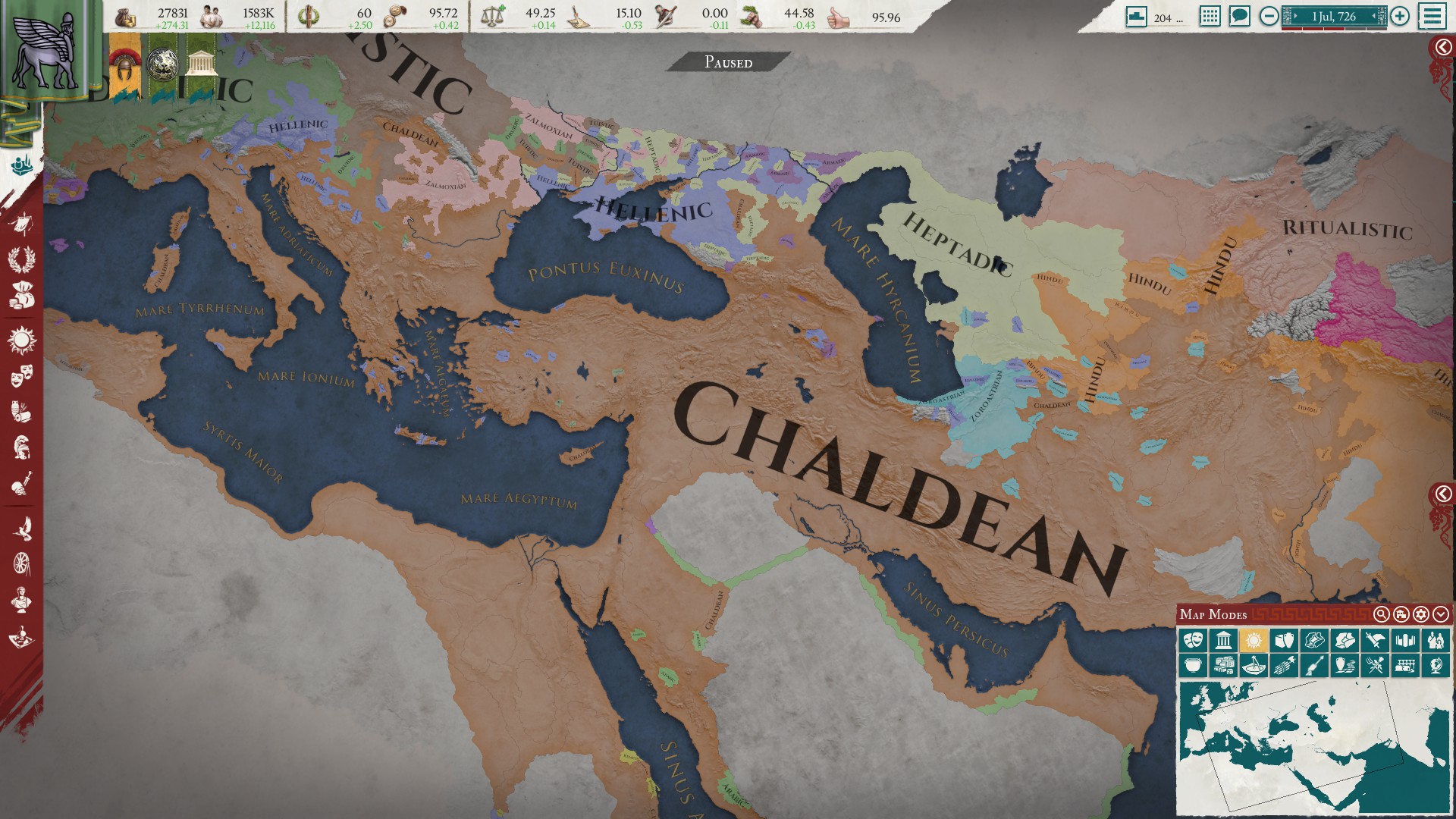 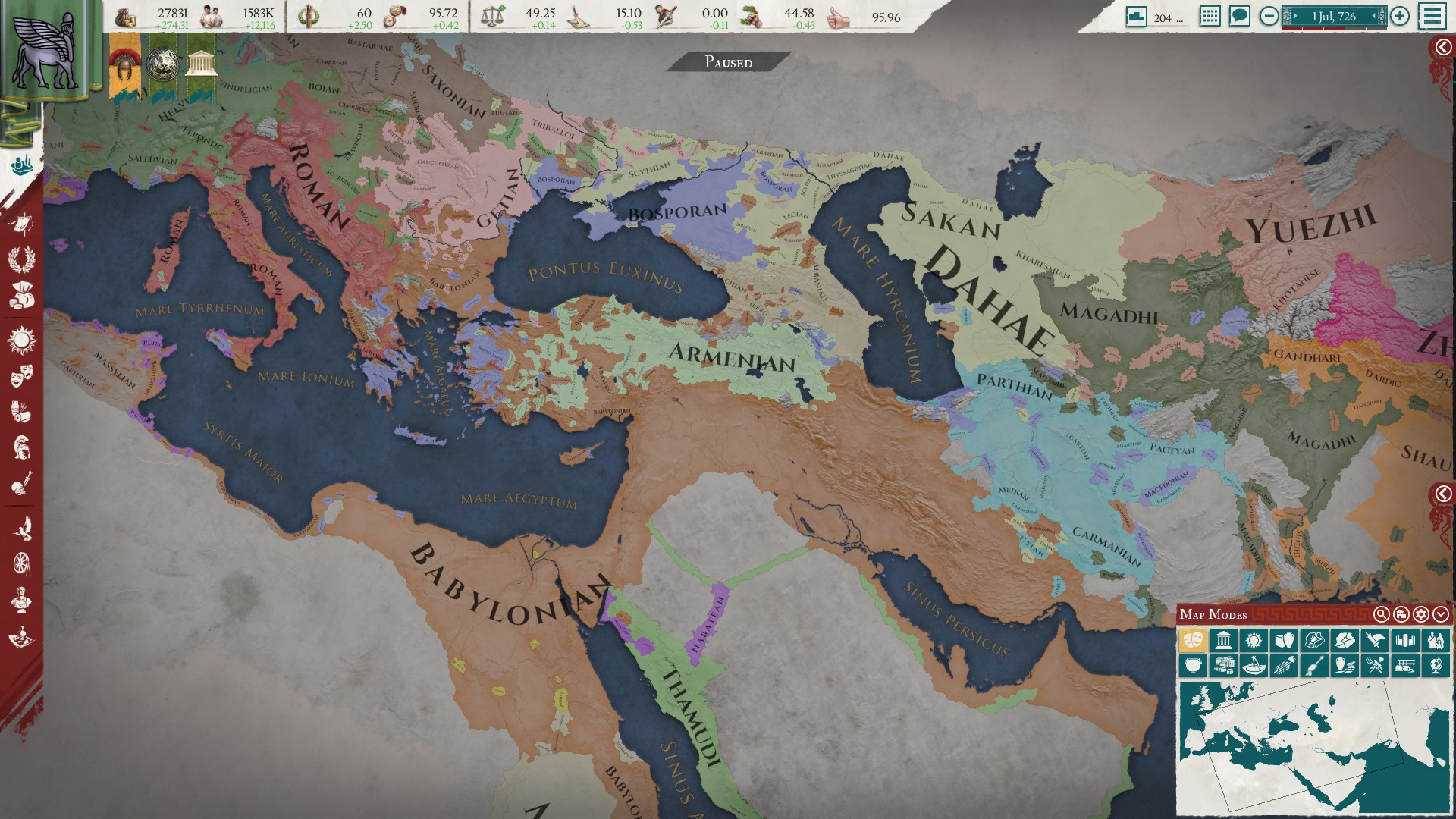 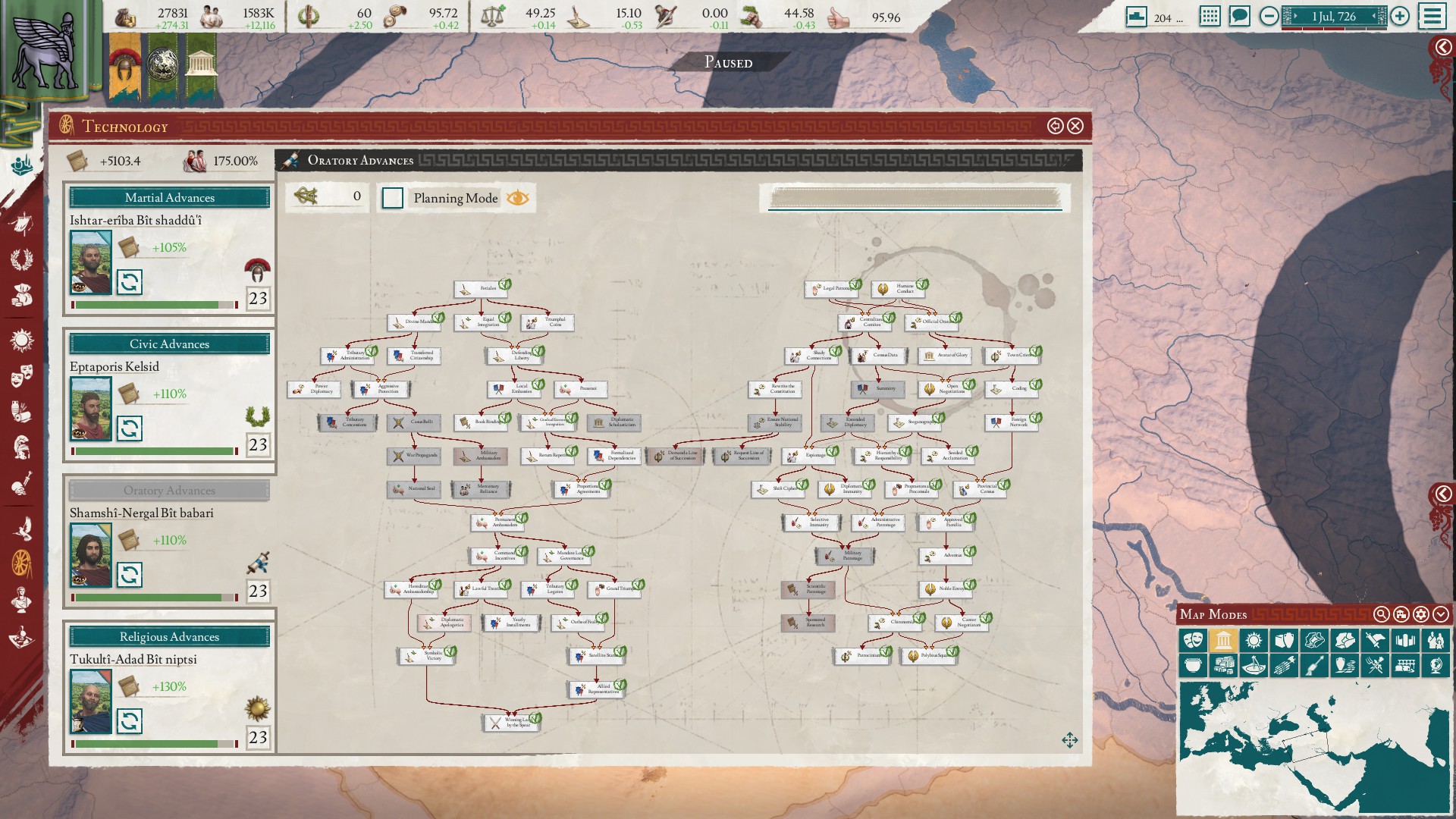 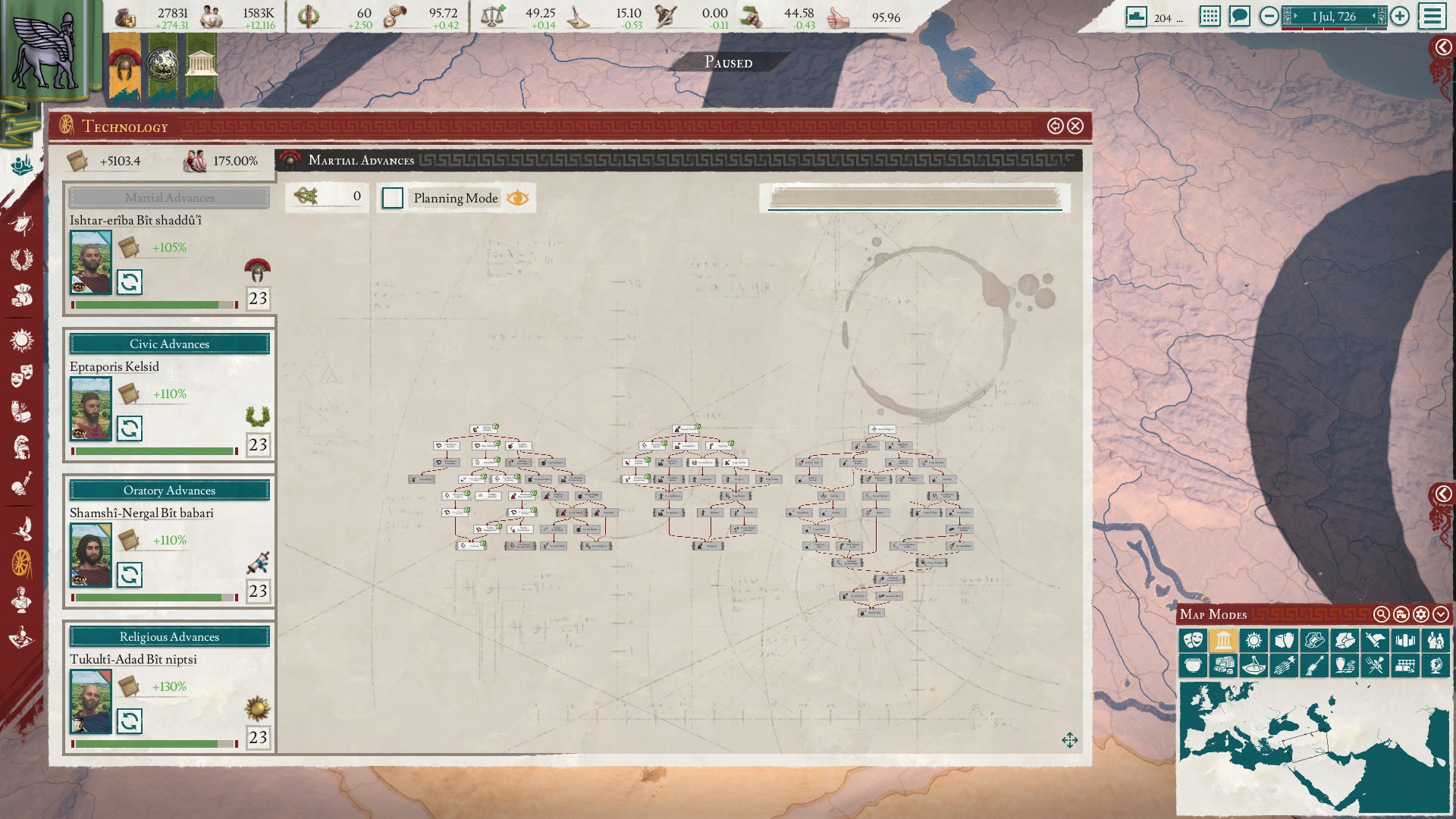 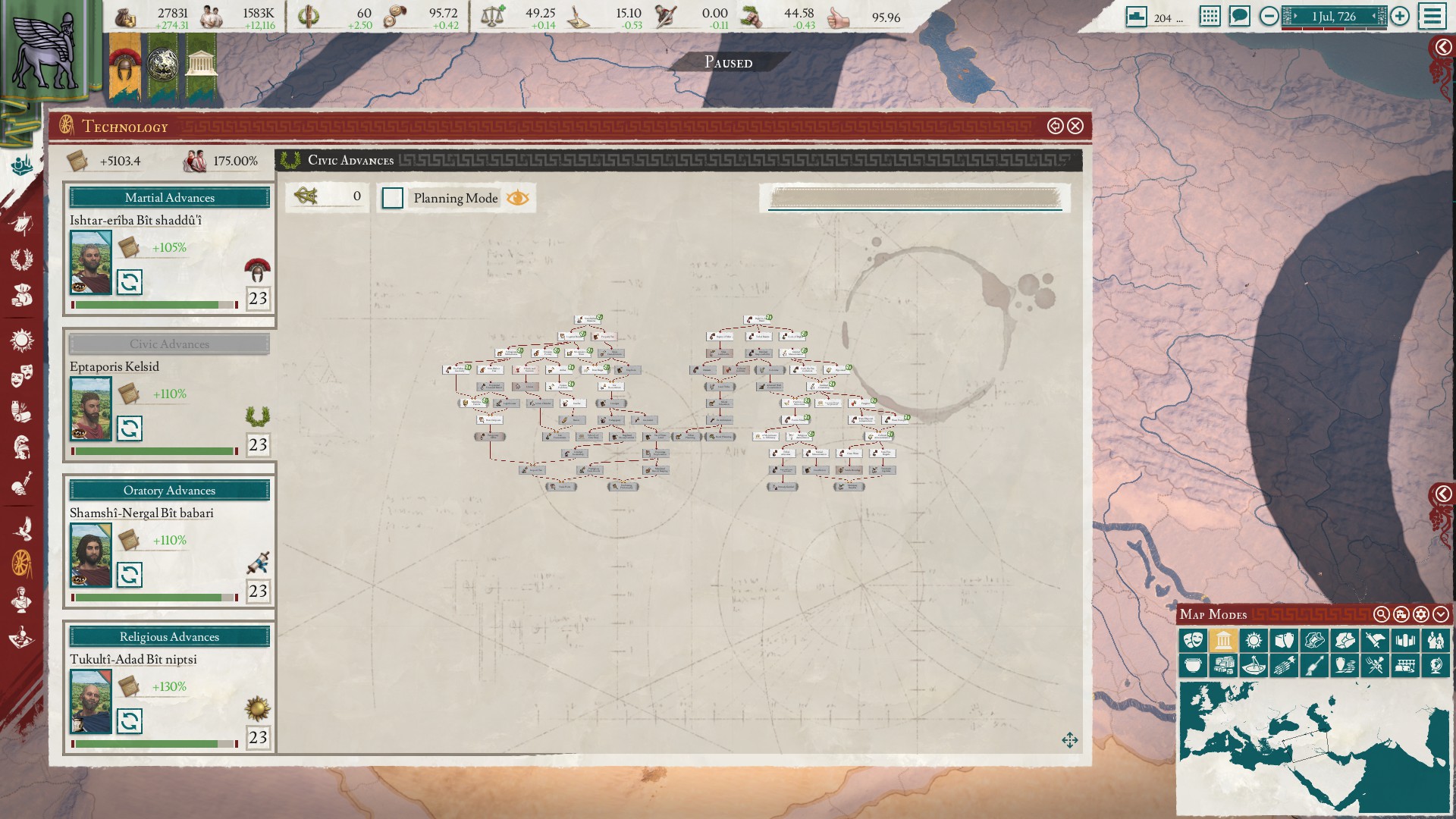 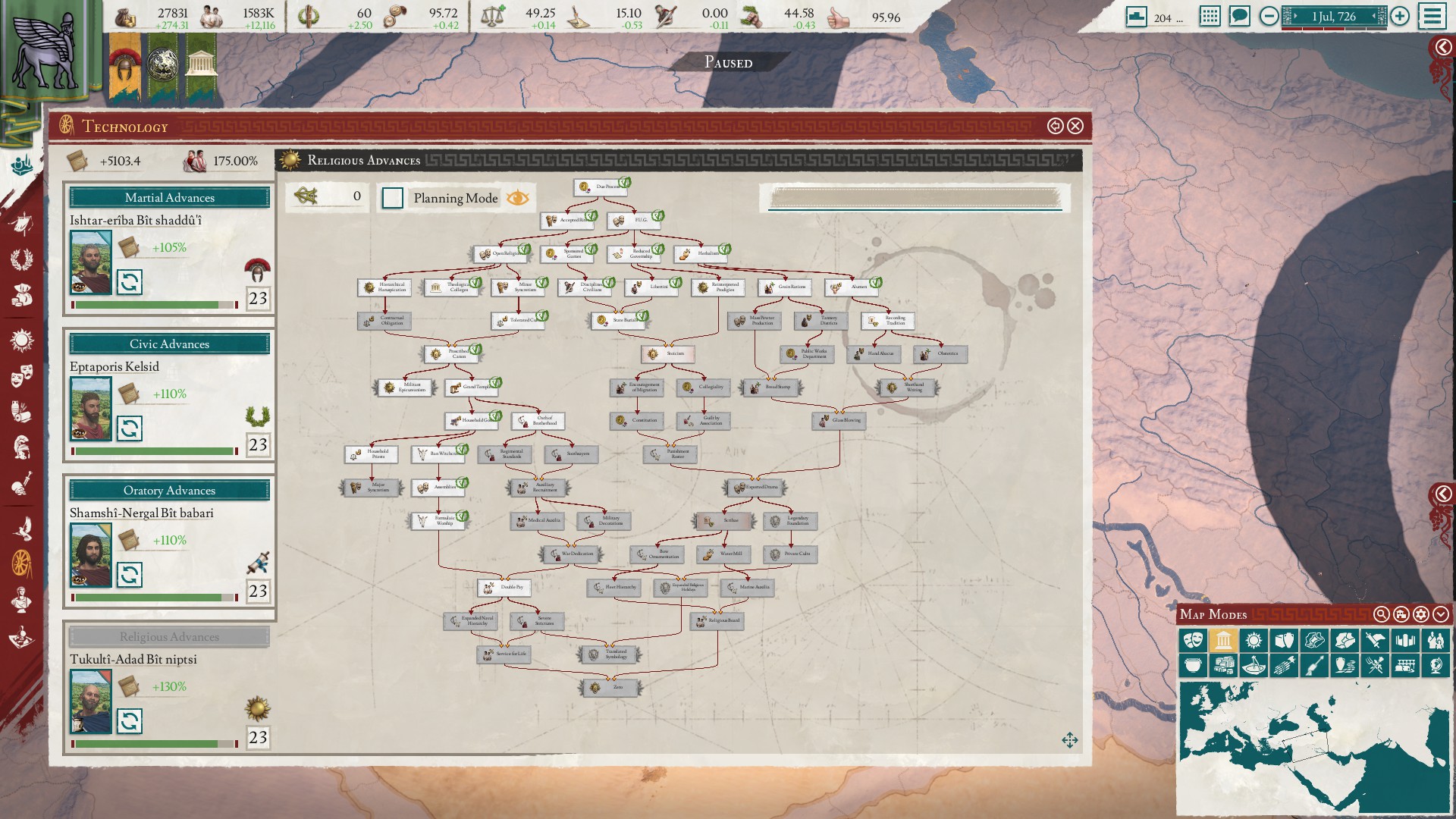 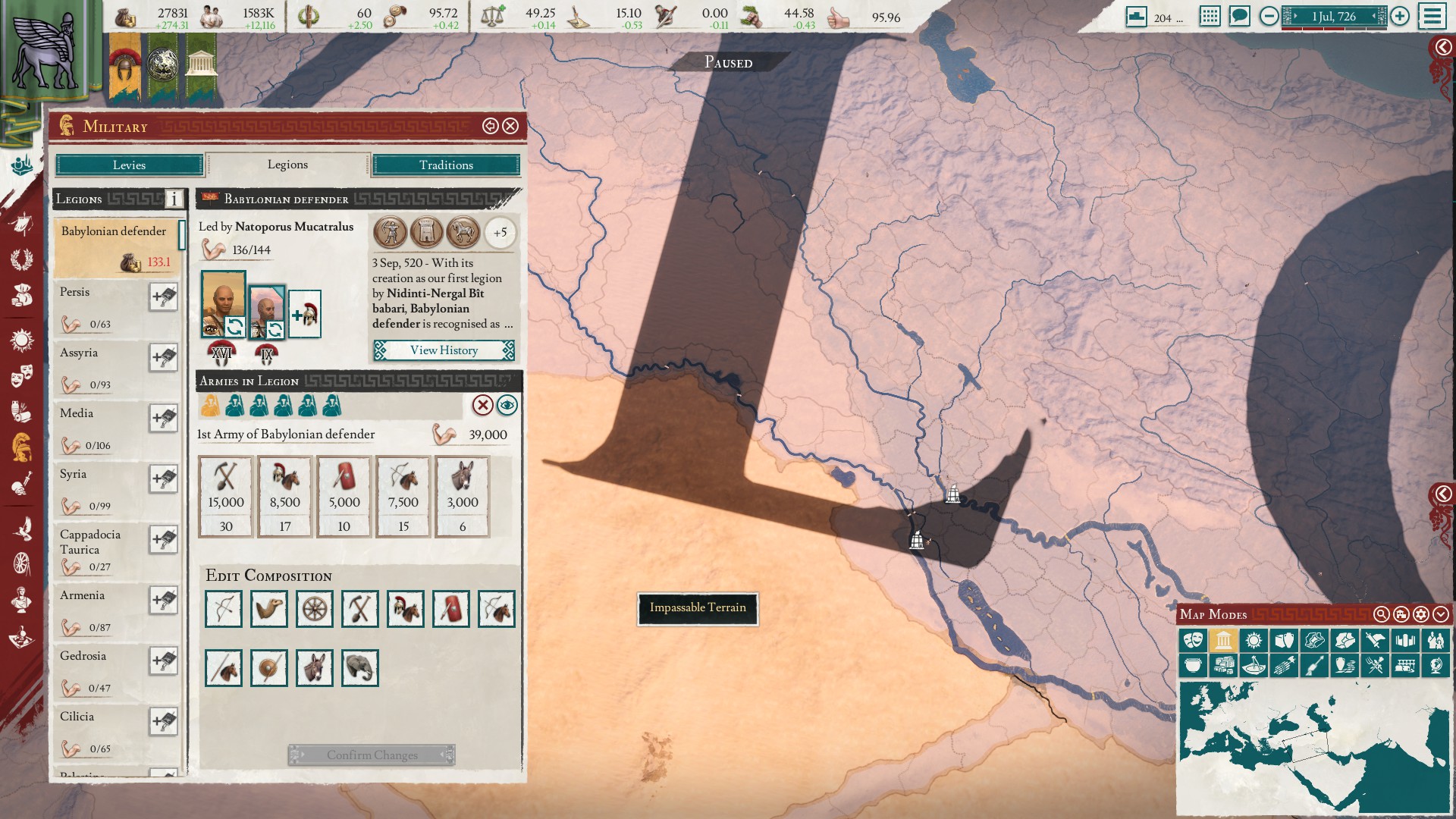 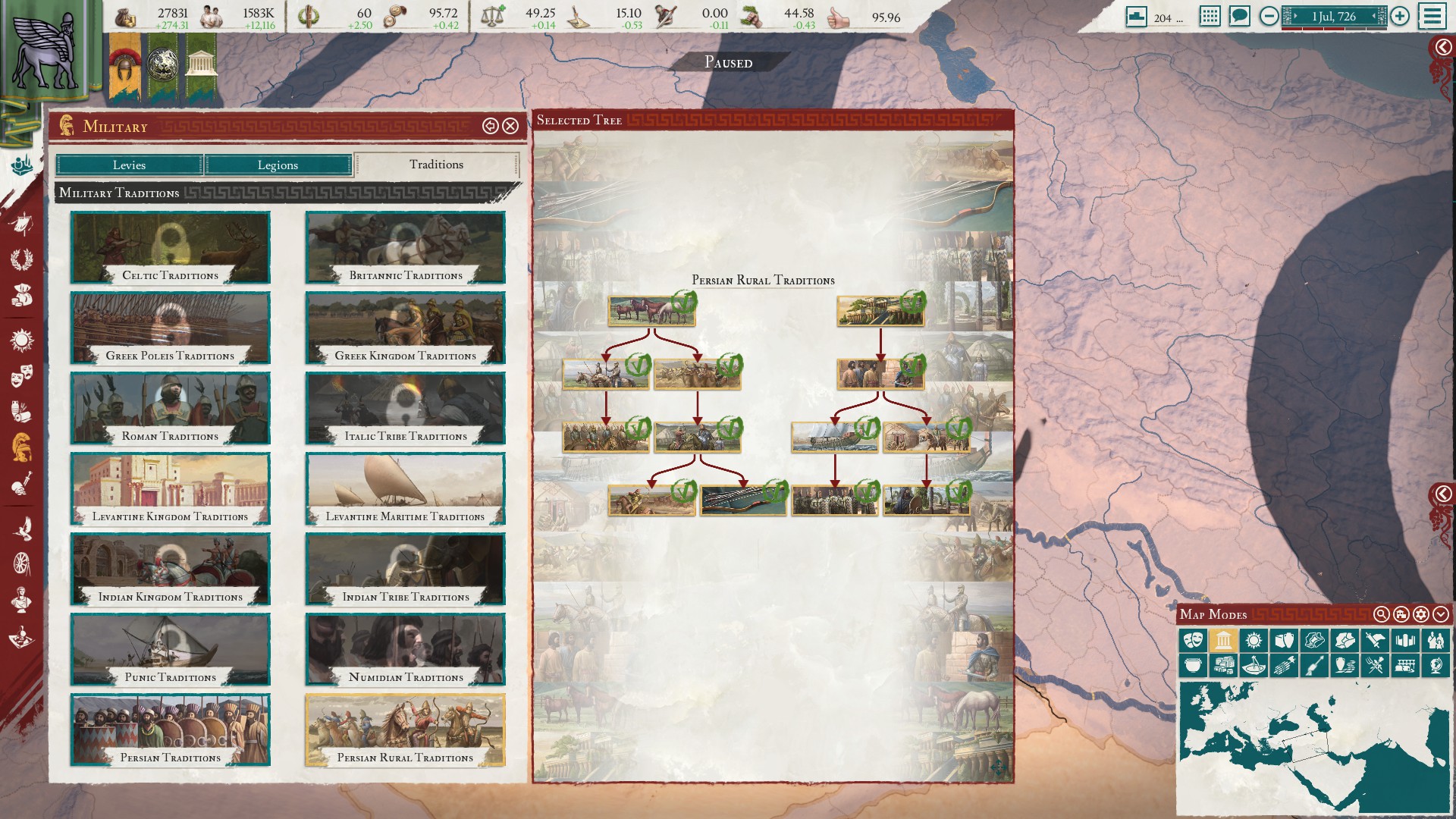 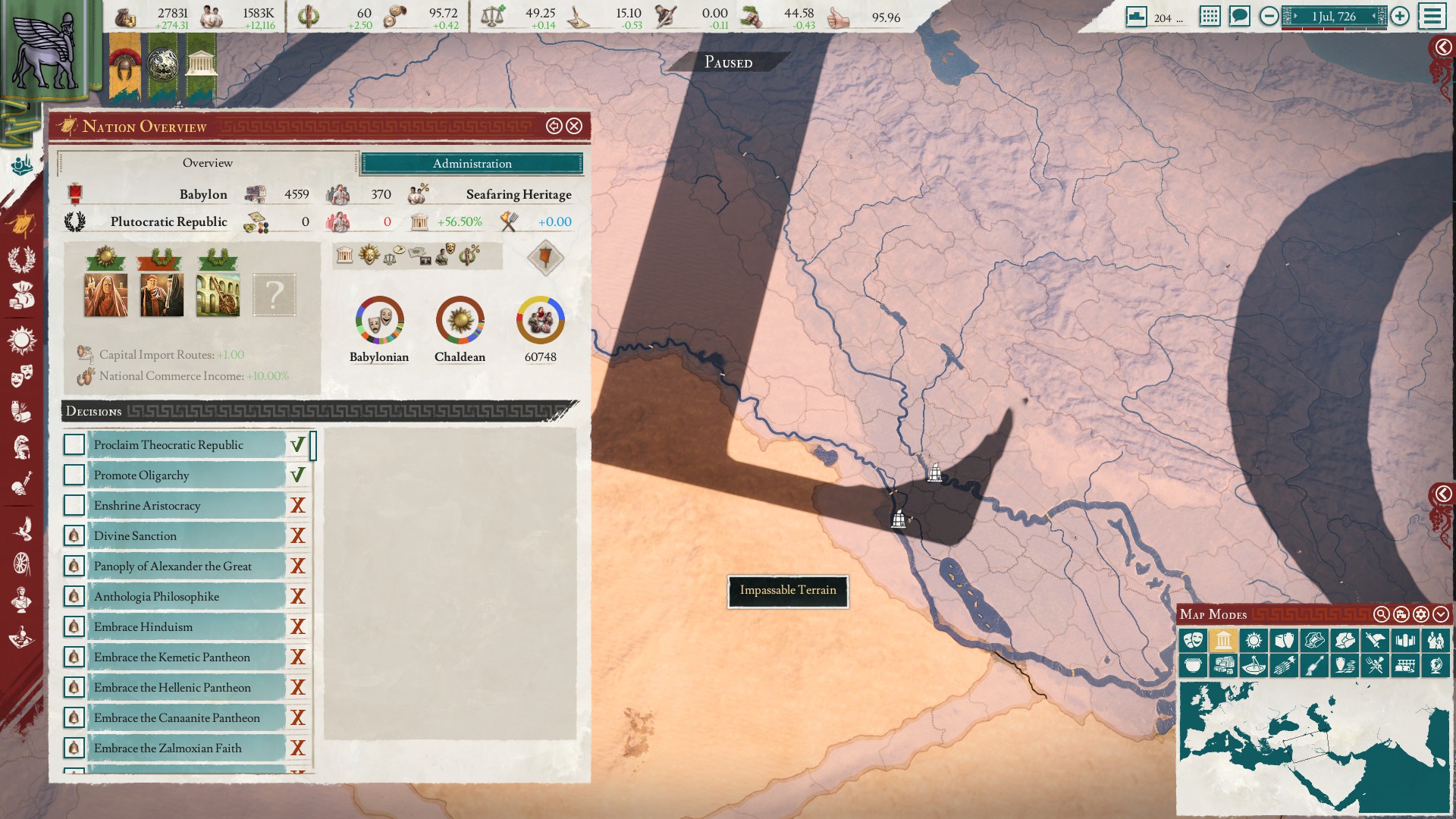 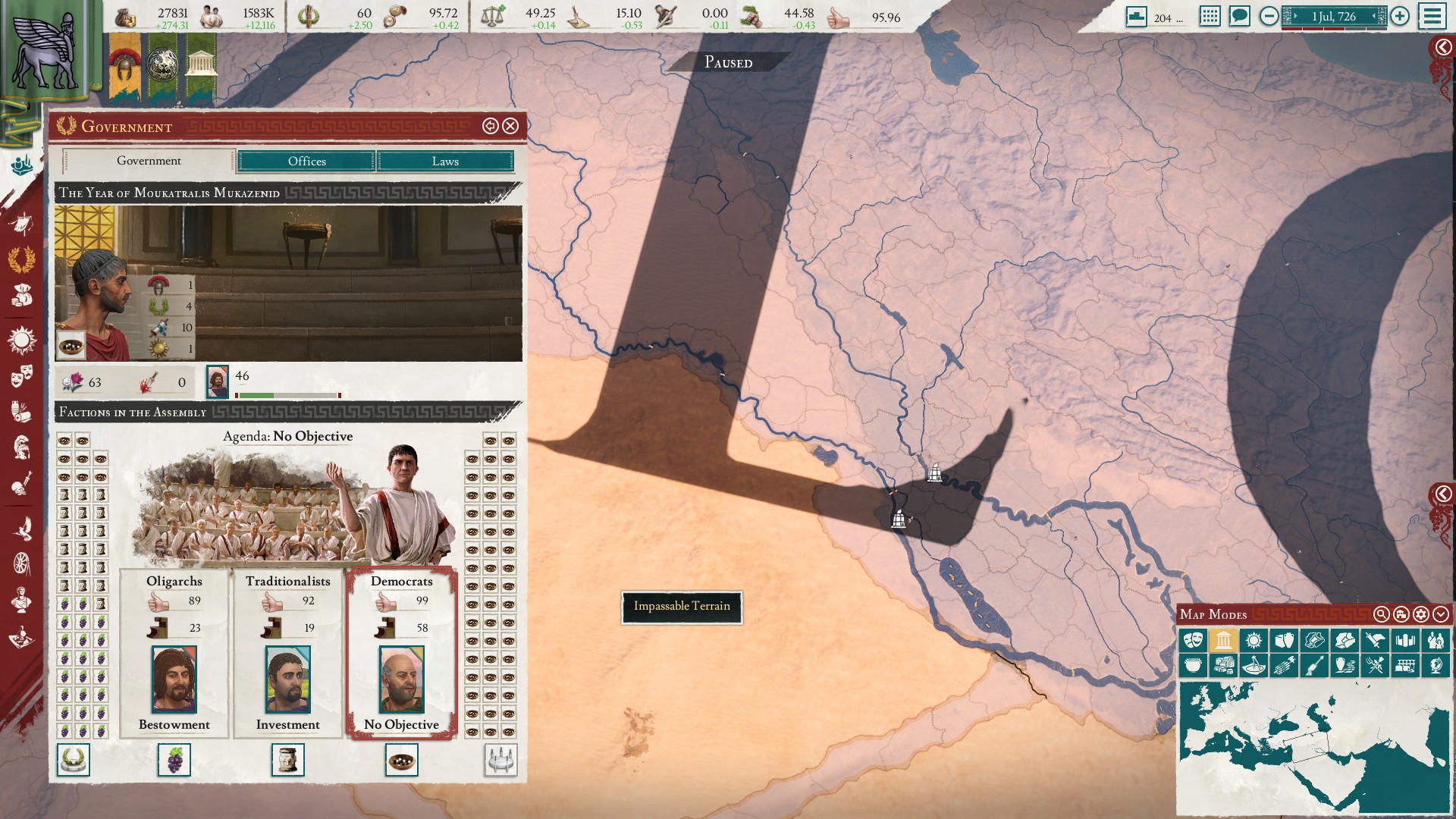 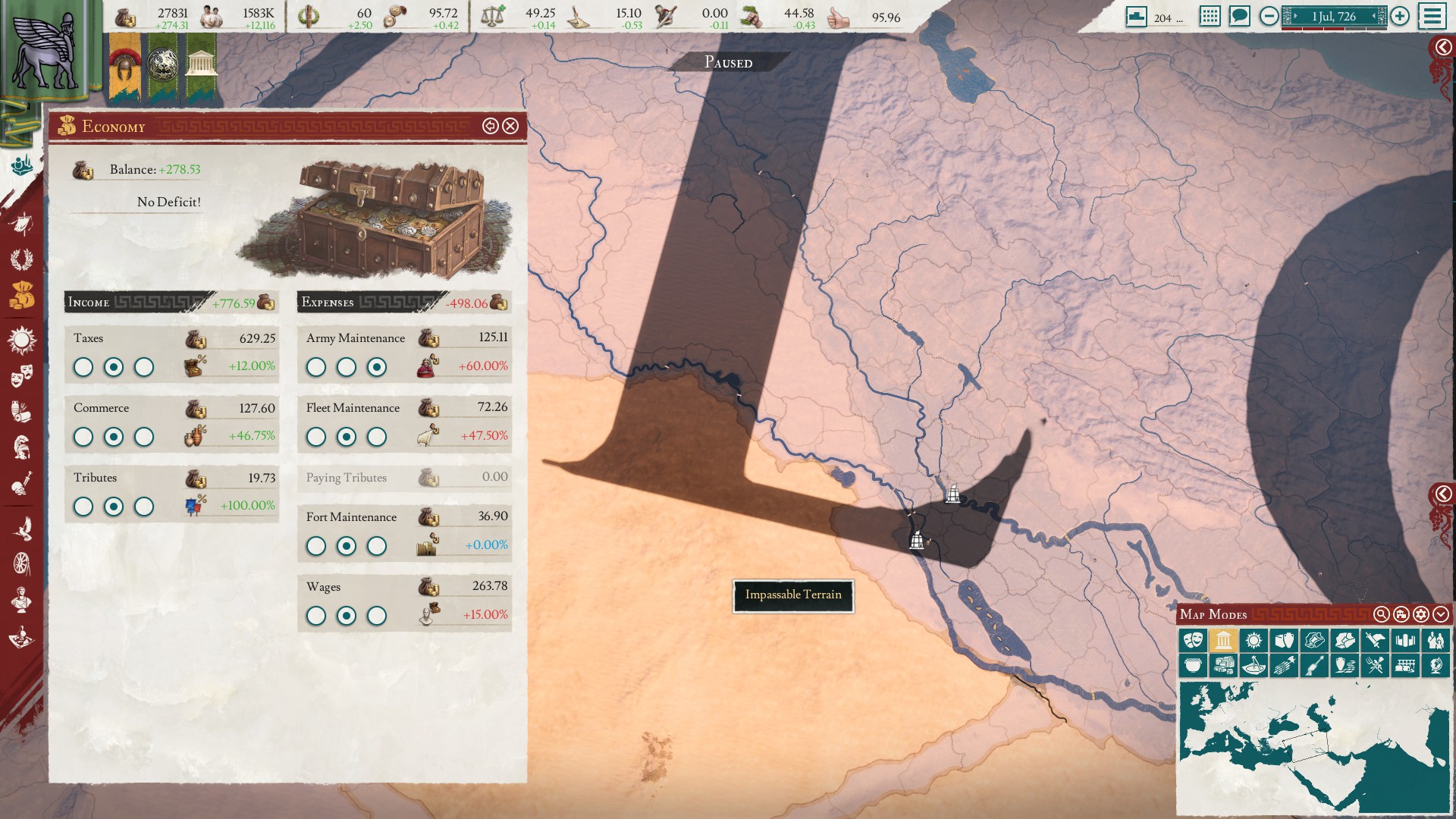 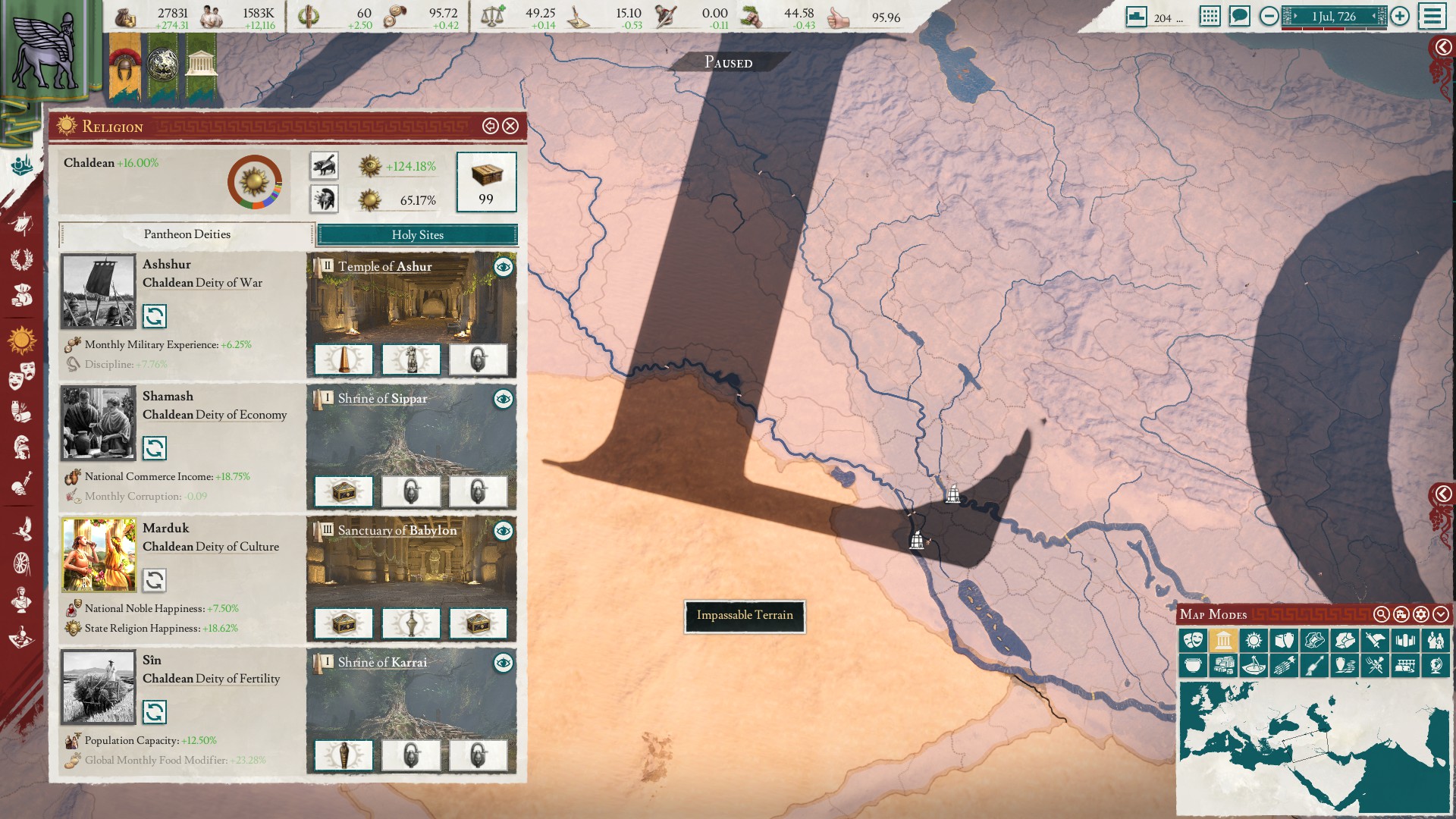 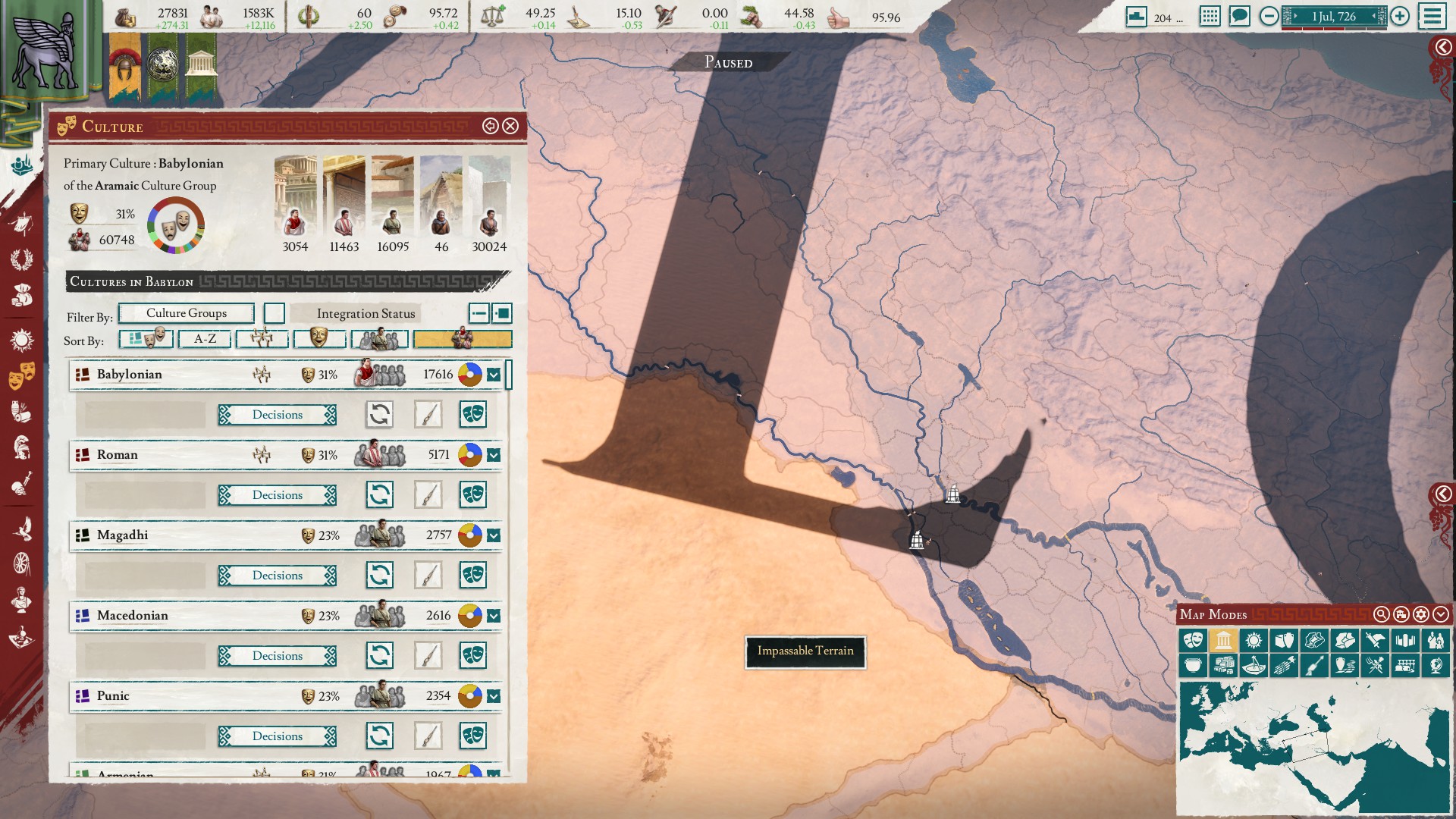 celco said:
My vassals conquered horrible borders for me so I had to transform the game into a gigantic conquest.
Click to expand...

Blaming your poor vassals for a late world conquest attempt...

By the way, well done!

(PS: the flag looks fantastic)
Toggle signature
Do not forget to UPVOTE all suggestions using the arrow next to the opening post in the suggestion forum new feature!
Reactions:
C

By the way, well done!

Well... one of them decided to sail from the black see to northern France and capture territory over there even thought I didn't even have Greece at the time. I feel the blame is justified

Thanks! Great fun and to much micro!
Reactions:

How did you manage the early game ? I'd like to give it a try too.
T

For what it’s worth… the tech Tributary Concessions is helpful when vassals capture territories you don’t want via the Imperial challenge, plus it helps with the AE… but I guess building a giant empire is always another option.
Reactions:

Tidster said:
For what it’s worth… the tech Tributary Concessions is helpful when vassals capture territories you don’t want via the Imperial challenge, plus it helps with the AE… but I guess building a giant empire is always another option.
Click to expand...

You can also release withit tributary concessions as Client States. If you dont want to keep, release from Client State status

C’mon, Blobylon rolls off the tongue much better.
Reactions:
C

Ampalemvi said:
How did you manage the early game ? I'd like to give it a try too.
Click to expand...

I though it would require patience, but actually your first war should come up pretty quickly.

0) Save money. This is not just the first step but you shoud do that all along (at least until you have Mesopotamia under control)
1) Delete your navy as it will not necessarily help. Same for the buildings. Keep the fort as the unique building.
2) Wars:
Preparations: Keep an eye on Seleucid Empire and get military access with your neighbors (do not ally them, they will simply cost you war score). They will go to war pretty soon in the west. Wait for a couple of month for their troops to have moved to that front. Make sure your own levies are ready at the Seleucid border. Make claims on the closest regions.
The war: Go straight to occupy the region capital. Once this is done go and sack any city you can find (hard sack option since your ruler is in charge). You can think about raising some mercenaries, but don't expect to win major battles. Use them to have their amries follow them around while your levies sack cities. The major threat are actually the super powerful armies from Bactria. Don't panic if their navy blockades your home territory. They will leave eventually.
The Peace: I made a very tight white peace with them. The main goal was to get the money from the sacking. If you mange to take lands early, only take the regions/territory which would help you form Babylon. I would recommend to wait as any of these territories will be besieged and cost you war-score in future war.
3) Repeat the same styles of war for the next 1-2 wars.
4) Once you have a solid amount in the bank you can think about raising mercenaries to fight them properly. Bribe their own mercenaries to get over the limit. Again only take territories/regions which are required to form Babylon. If you have too much war-score, release Bactria. They are a huge pain.
5) Once you have formed Babylon you are in a similar position as any other medium power in the region. You will change culture so you will have access to a lot of levies as well as more mercenaries.
Reactions:
Show hidden low quality content
You must log in or register to reply here.
Share:
Facebook Twitter Reddit Tumblr WhatsApp Share Link
Top Bottom