Jump to latest Follow Reply
Menu
Install the app
You are using an out of date browser. It may not display this or other websites correctly.
You should upgrade or use an alternative browser.
M

I have played HoI IV in last days and I had to get the old game to do a comparison. The. Here a report of first activities, giving a rough idea about my army and industrial situation and how the China campaign starts.

1. Building power is enough to give some points to expand industry power, to improve air groups, some light cruisers (capital ship starting position is really good), and obviously some units that will be used in China; normally I am building 3 infantries and I can spend some point for the first armored unit; 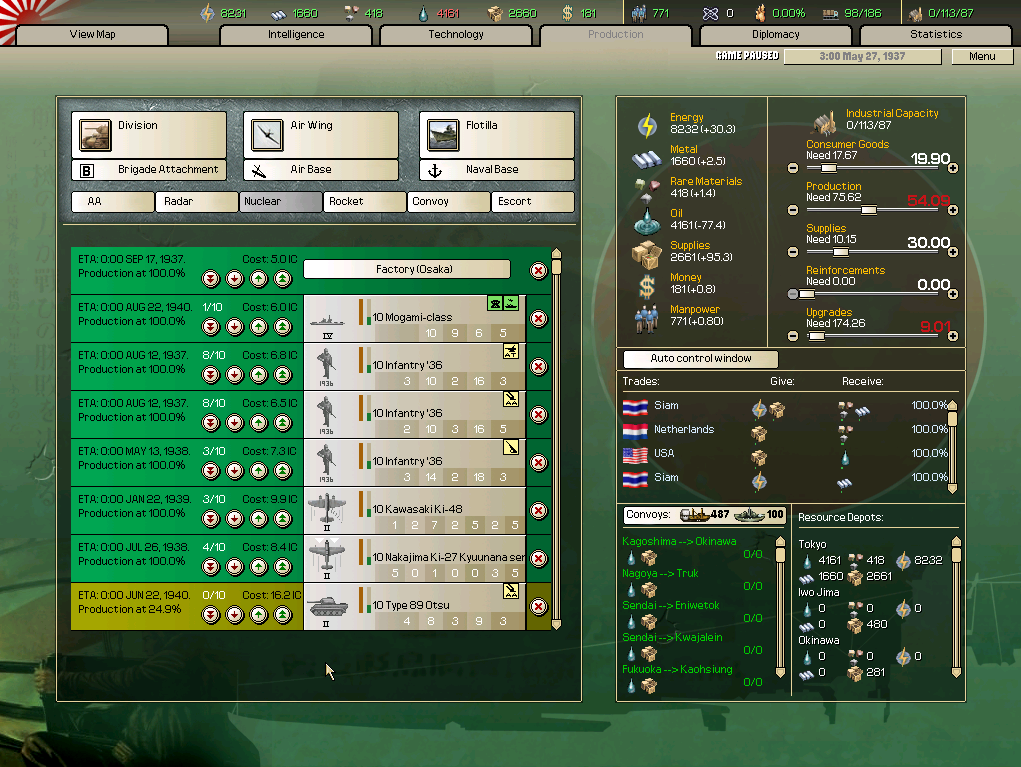 2.3.4 Situation with army/navy/air; for the army it is not exceptional, but we will see what we can do with that;

5. War is started, my first move is a central breakthrough, followed by the quick creation of a pocket to cripple enemy defensive positions; to b e noticed that I don't have real opposition in the air; an eventual landing would be made difficult from a good coverage of the shores from the Chinese, but I have managed to land in the Shandong peninsula; 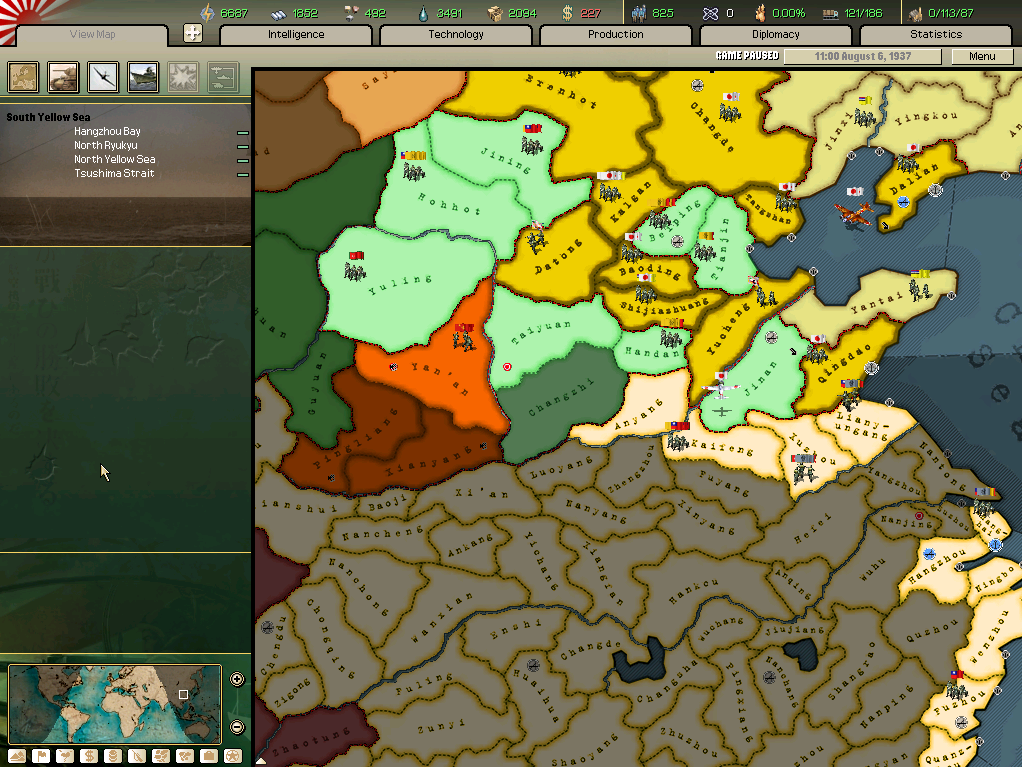 6. I have not managed to secure Shandong peninsula, but in the Wst operations are going well and I have created a new pocket; original chinese north front is going to be destroyed; 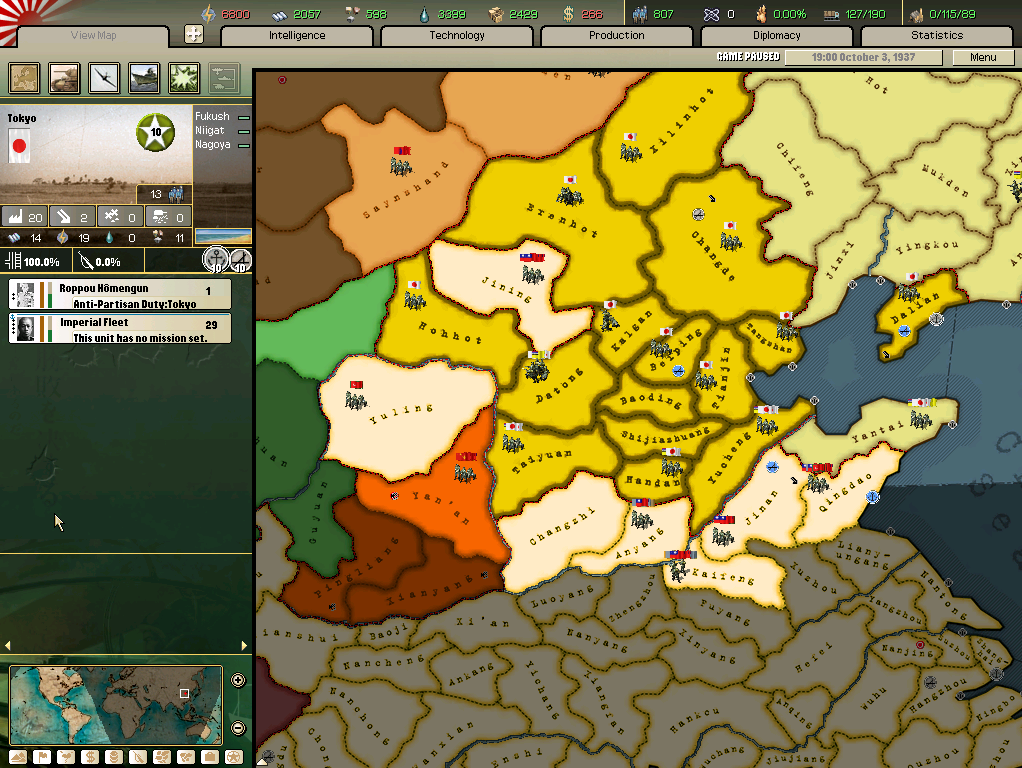 7. New puppet created and working to stabilize the front; 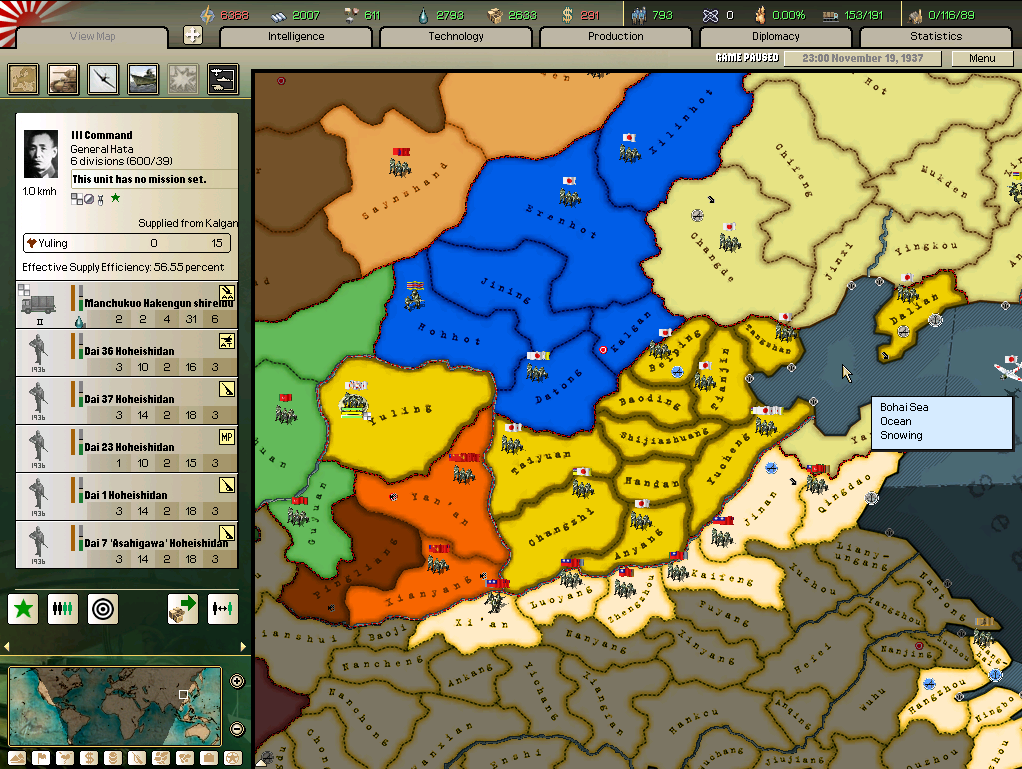 8-9. the front is stabilized, with Mao's fall; an attempt to take again Jinan is failed and the winter, and related frozen lands, advises to stop and regroup; studyng the situation, forces will be moved from the west to attempt the creation of a new pocket in the East; 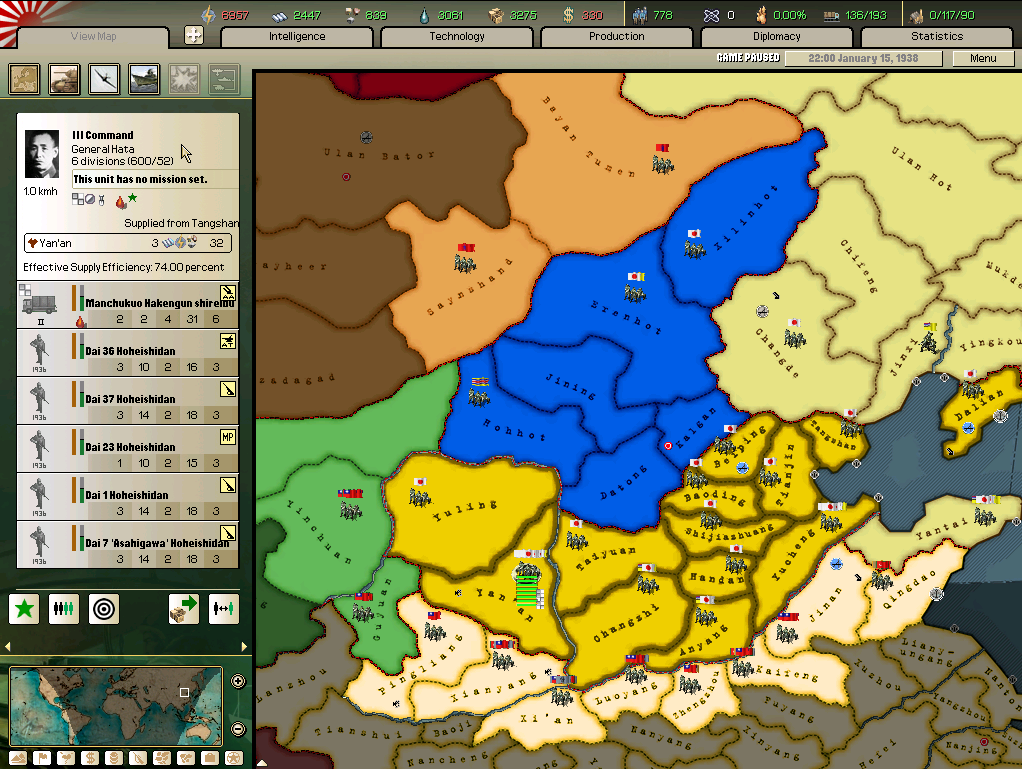 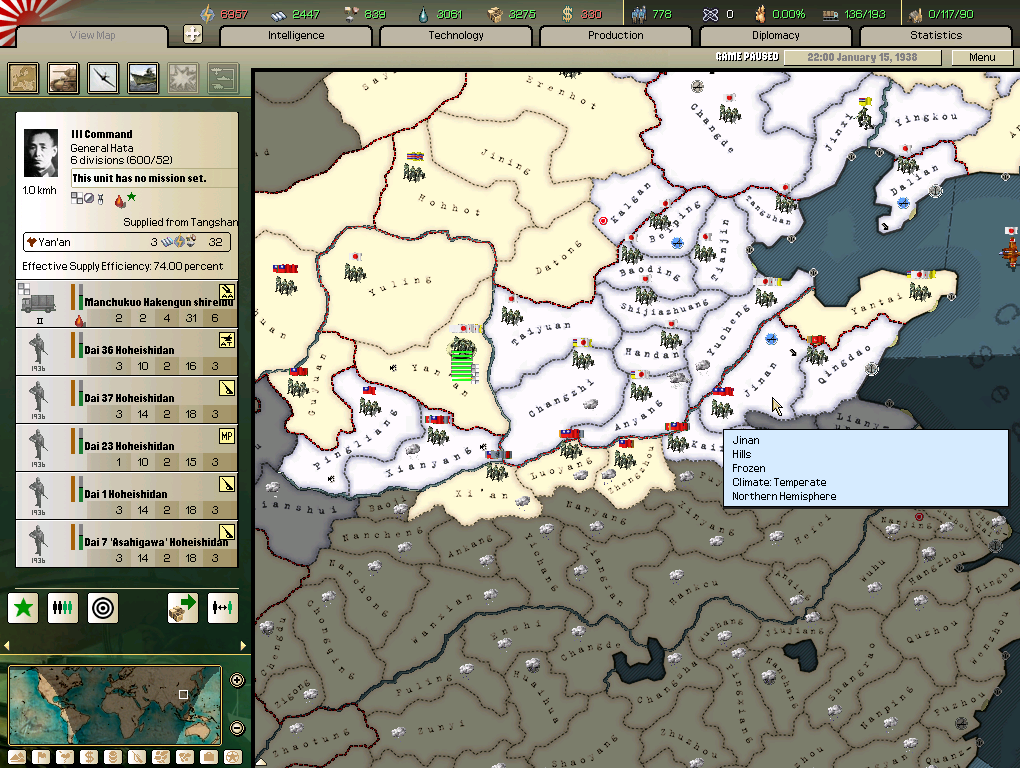 10. Instead of a frontal attack in Shandong, a Japanese forces break through behind it; I have moved some forces from the West to the center to prepare this attack, and my troops are not enough to keep Yuling; so, in the west, I just create a strategic salient in Yuling; I will ot attempt seriously to take it, but at the same time I will avoid Chinese took it stably; 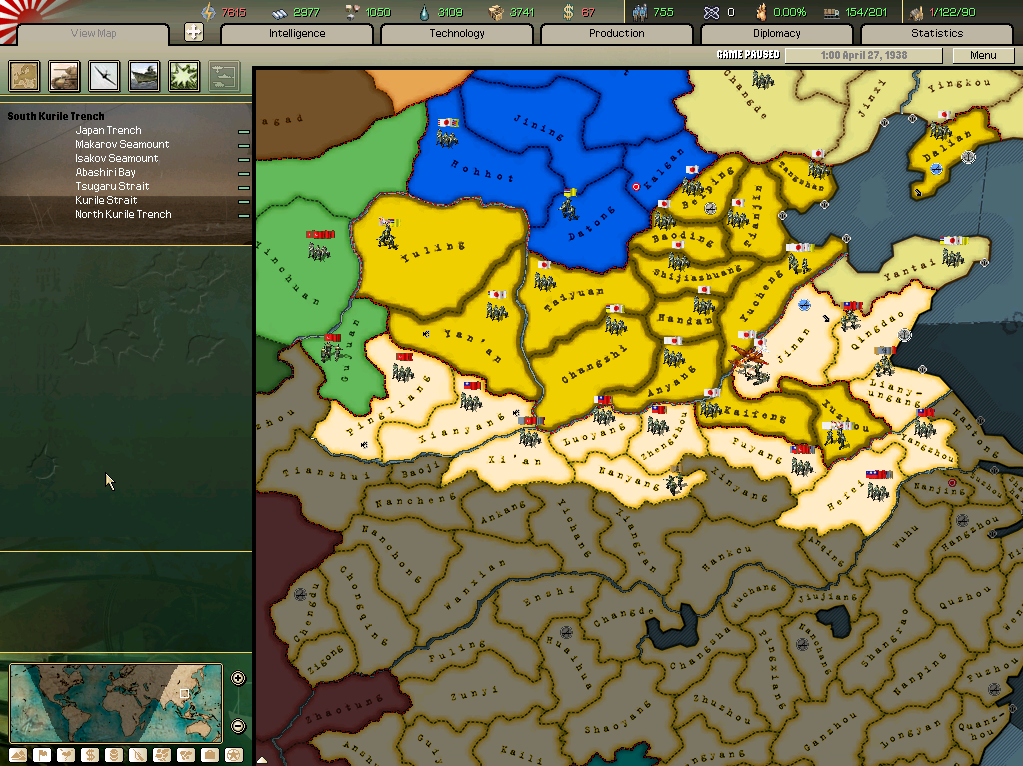 11. and the new pocket is closed; attack against Jinan are done to reduce pression in the base of my attack; 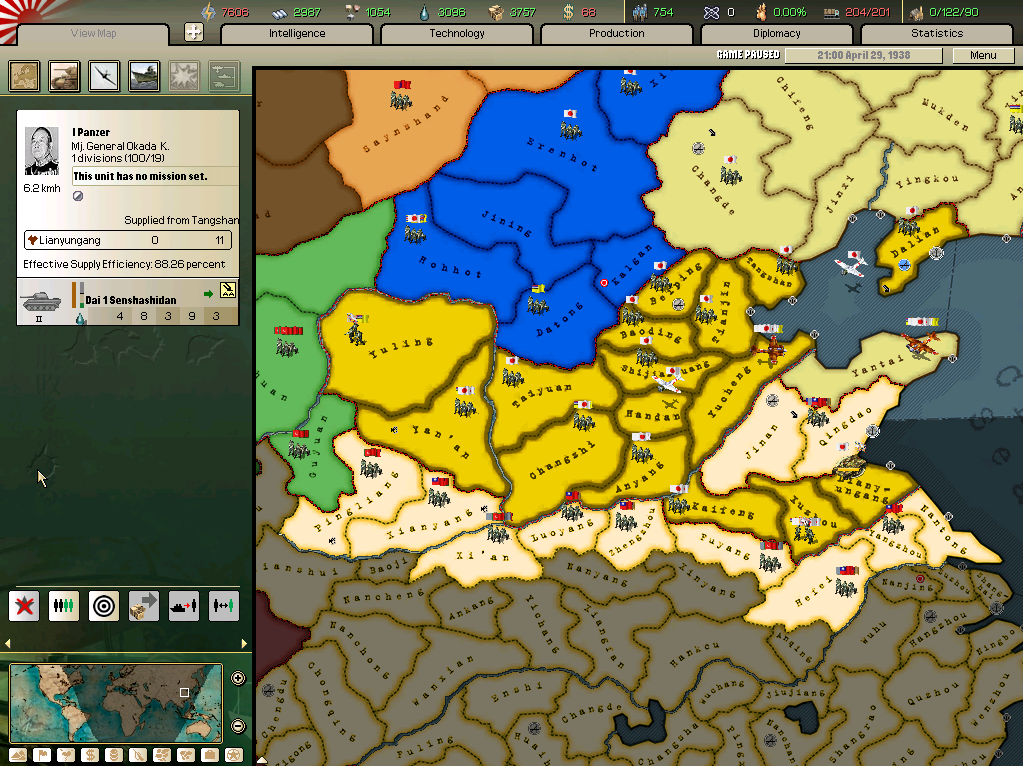 12. Having destroyed other tens of Chinese divisions, I can organize a new pocket, this time even more ambitius,, pointing to encircle China's capital, Naijing; here the preparation for creating the pocket; 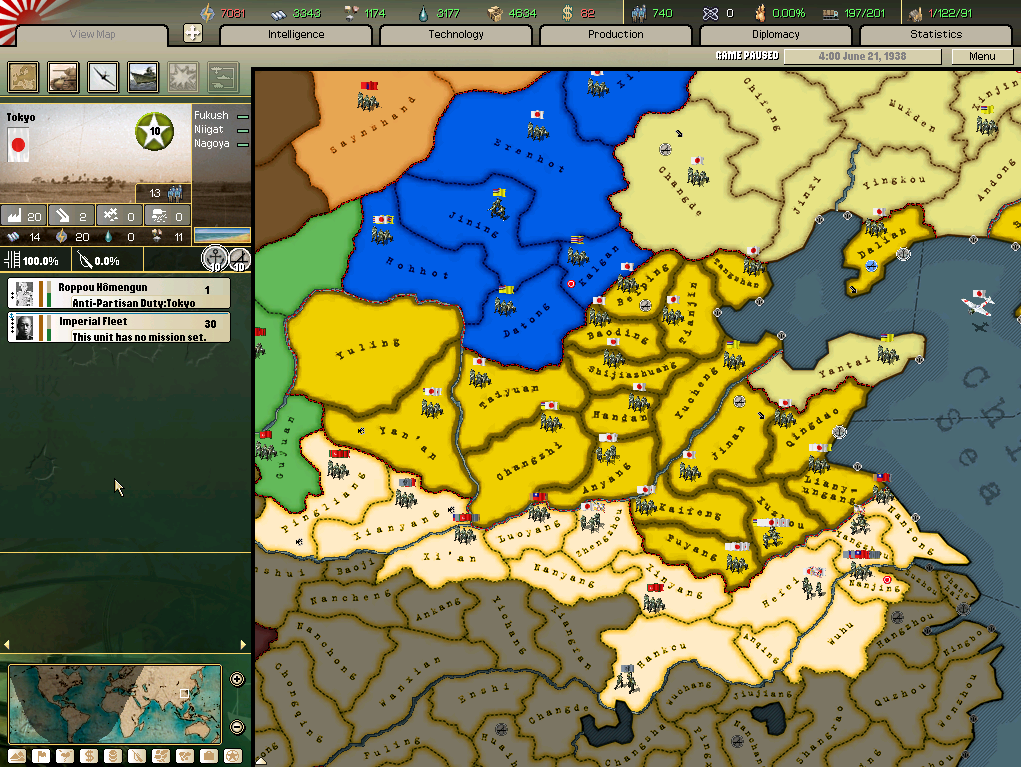 13. and Naijing is encircled, ready to be taken: 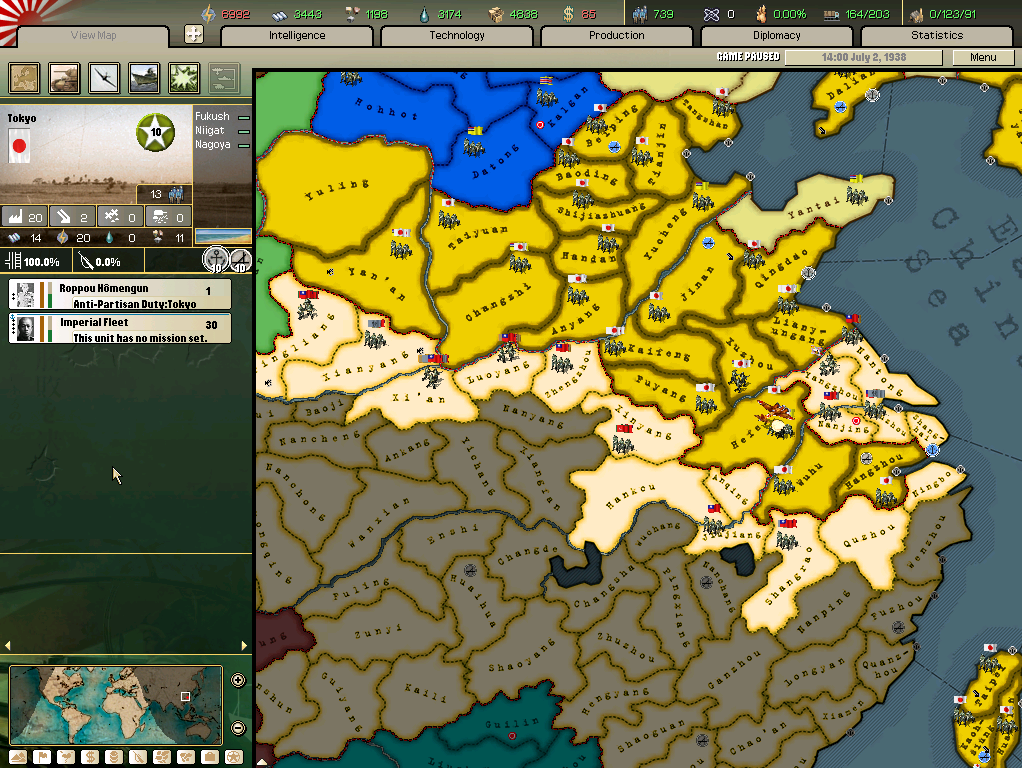 14. at this point, after having encircled and destroyed tens and tens of Chinese divisions, eastern Chinese front is ,as expected, collpased, and I can create easily another pocket, reaching Guangzhou; 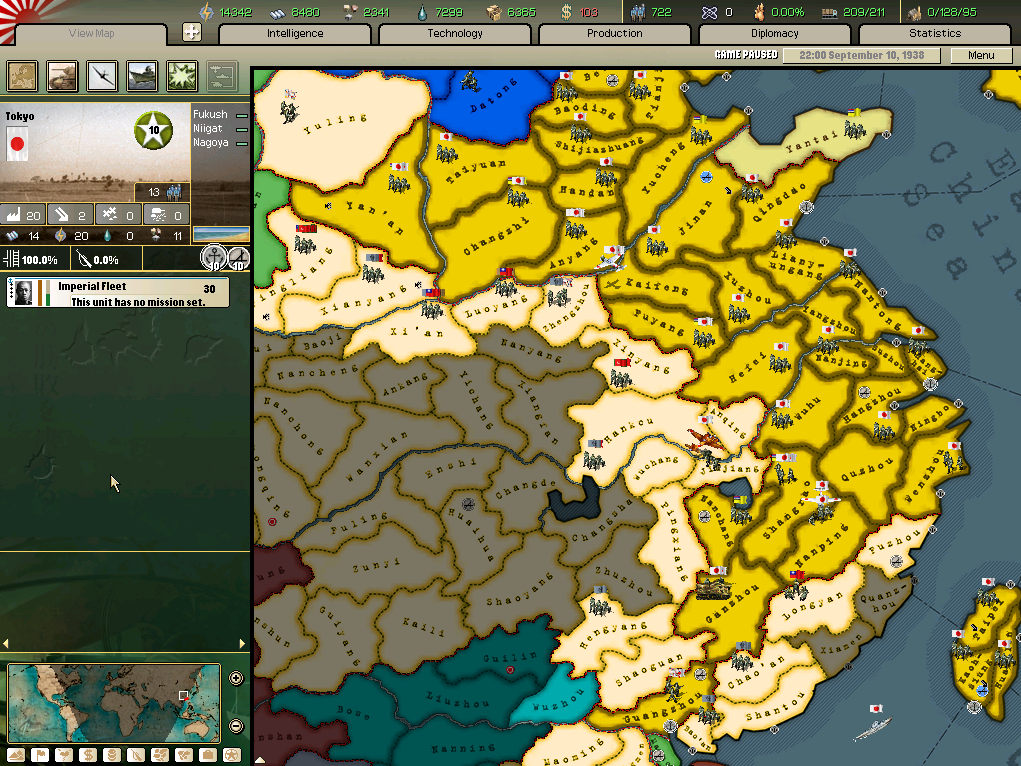 15. Having smashed the East, my forces turn and prepare a new attack against the center; 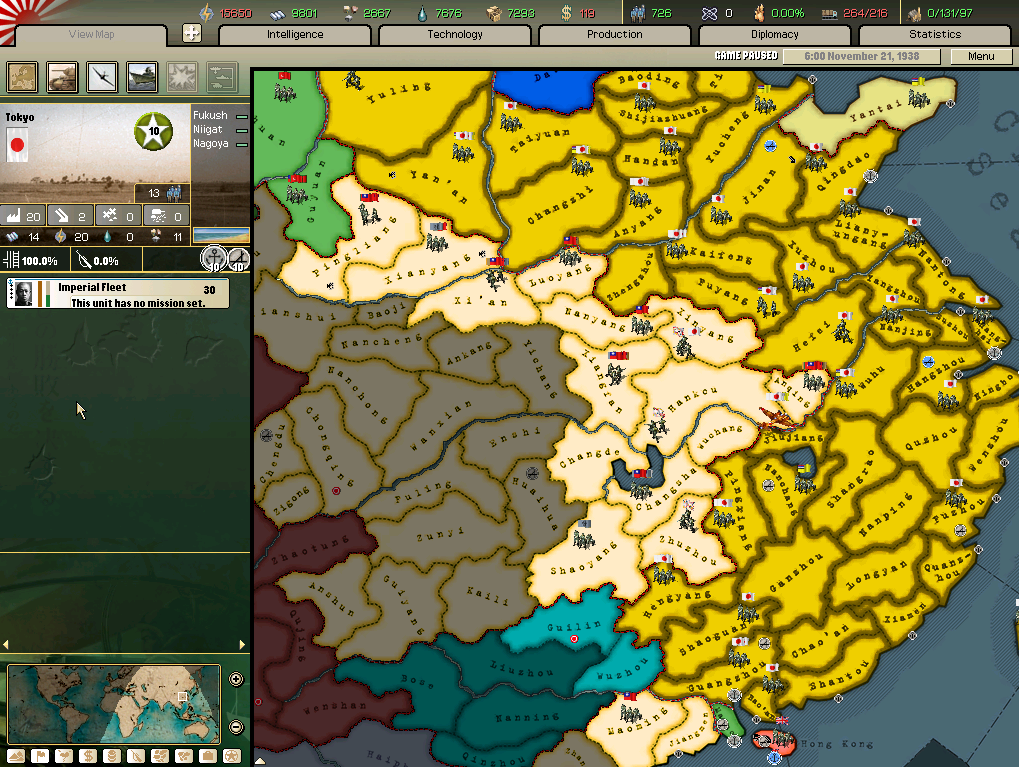 Comparing with HoI IV... I found Hoi II much more flexible; if we keep the focus on the campaign in China... after having created the first two pockets, China has been able to replace its forces, still keeping the ground; I have preferred not to build only infantry, which probably would have helped me at the start, to be in a better situation later; and, in fact, tactical bombers are giving me a massive help and the interceptors are enough to protect them and to avoid China attacks; but, really interesting, apart the initial pockets when China was not fully positioned yet, the two pockets in the East in the 1938 have been devastating; with the first I have shattered the defense, and with the second (Nanjing pocket) I have literally wiped out an entire front. That, is what I expect when I do similar encirclements... and what I have not seen in HoI IV, where you did not finish encircling that you were in the same situation as before;
M 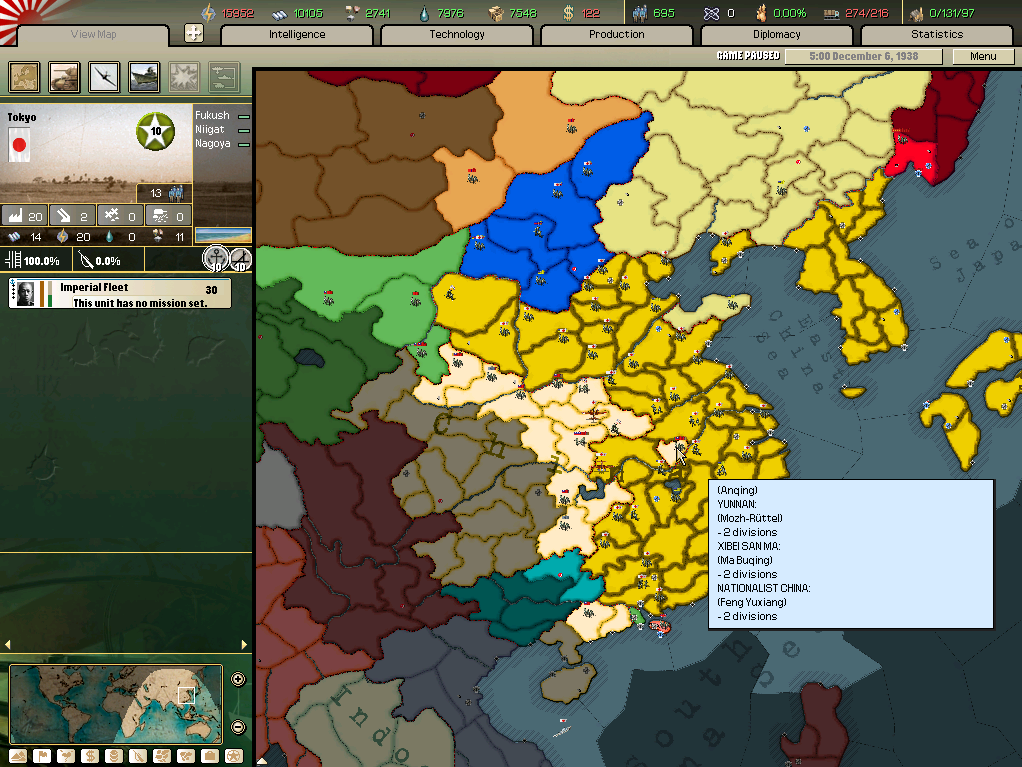 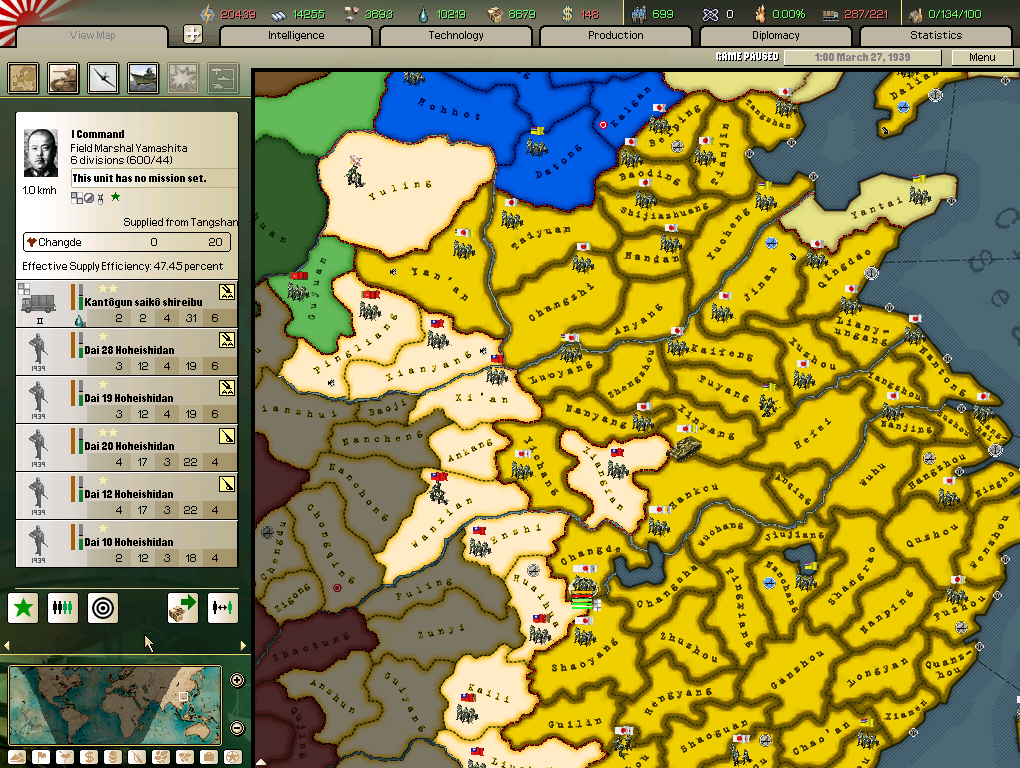 18. Another pocket in the South and reached new China capital. 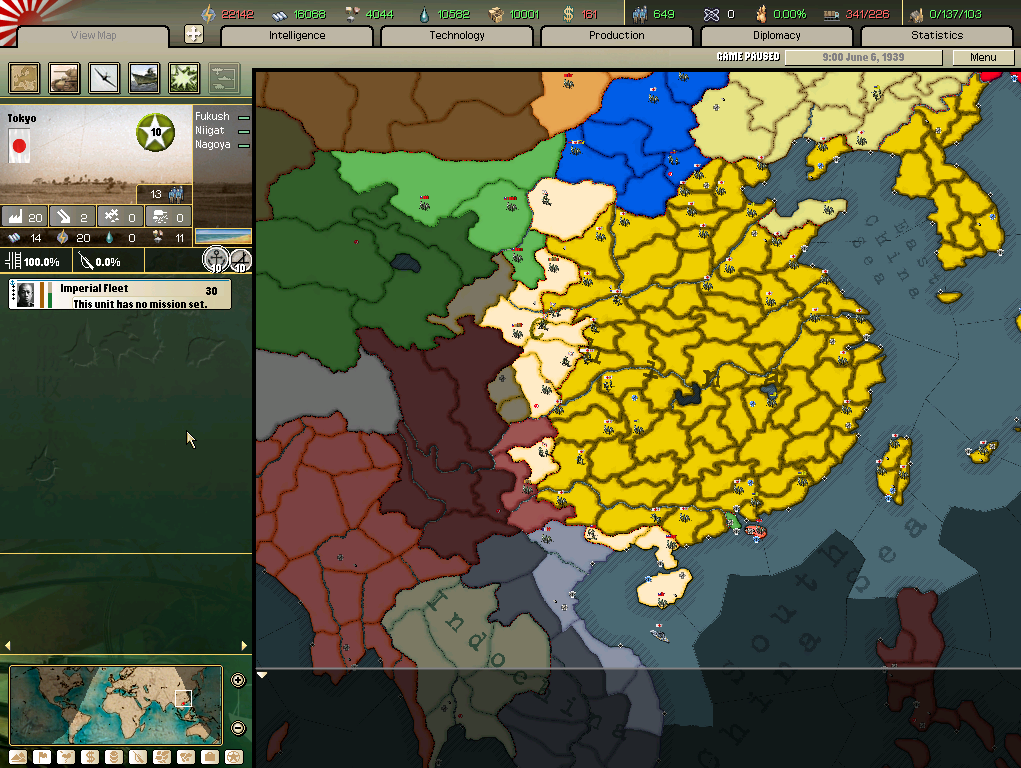 19. June 1939, China is defeated and made a puppet. A full annexation would cause too much discontent; 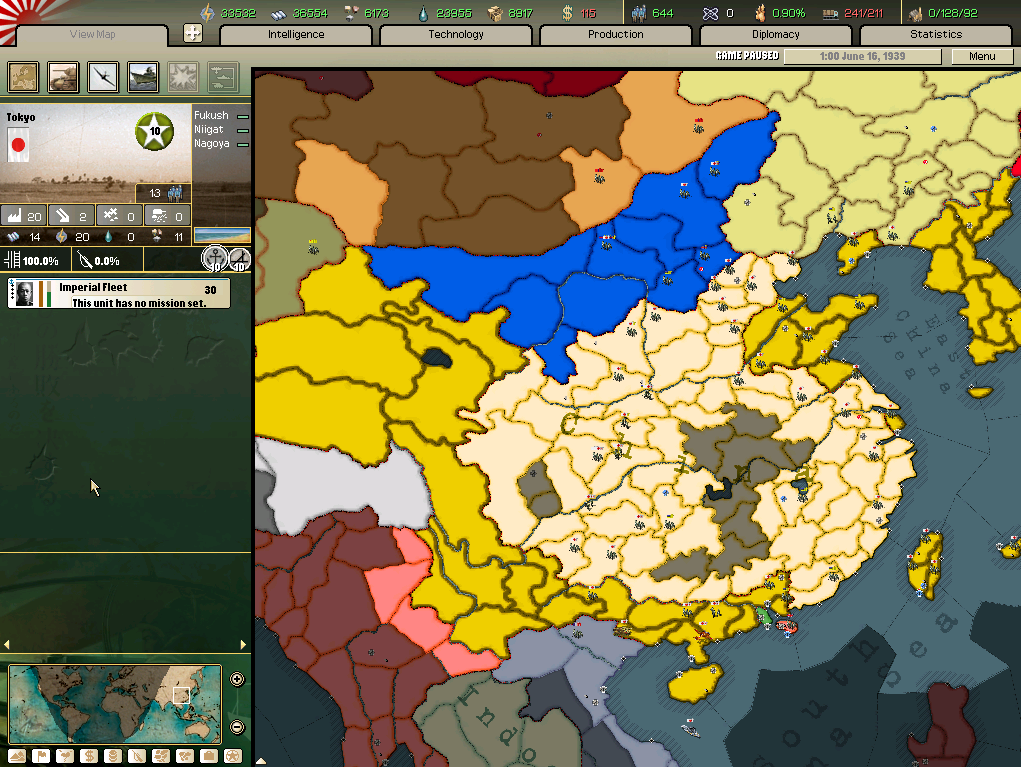 20-21. Some statistics for the army and for the industry; building better infantry, two carriers and a transport wing to diversify tactics; 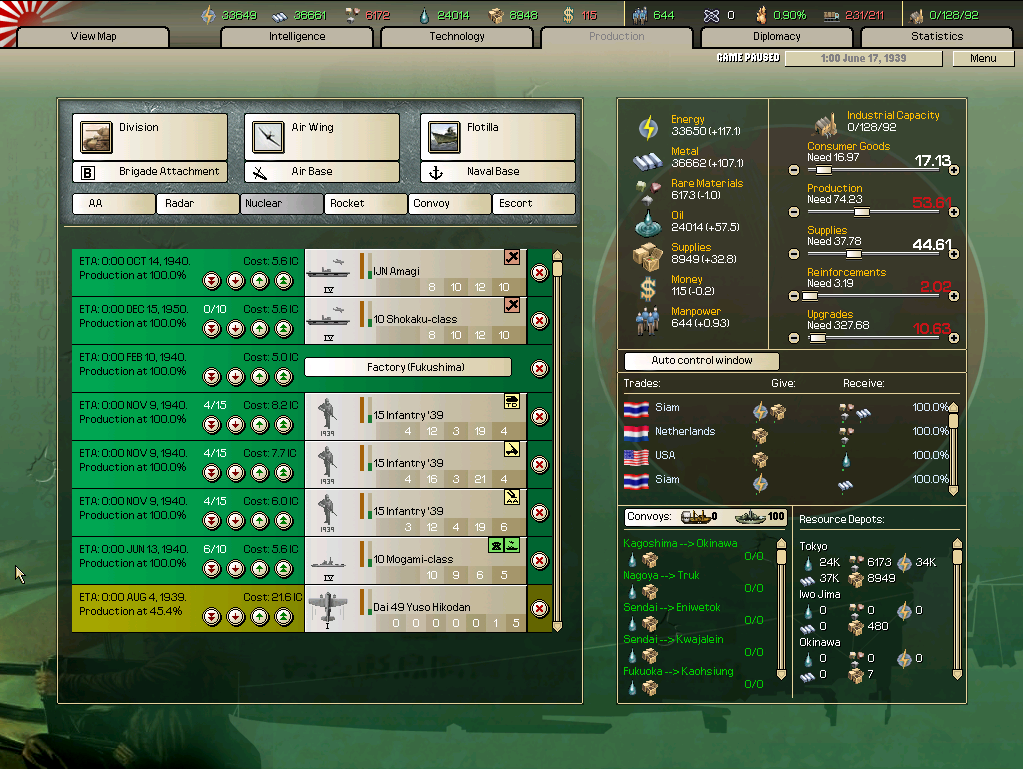