Anyone have a Full HIP (EMF) and The Three Towers Compatibility Patch?

Jump to latest Follow Reply
Menu
Install the app
You are using an out of date browser. It may not display this or other websites correctly.
You should upgrade or use an alternative browser.
Crusader Kings II 69418 Bug Reports 19652 User Modifications 10446 Suggestions 5856 Tech Support 6309 After Action Reports
B

First I love HIP and EMF and I've played L3T only a few times, largely because once I played with EMF it was hard to go back (unless it is something like CK2+ which has similar features). Does anyone have a compatibility patch for EMF and L3T? I have no idea how to create one, I'm not tech savy, and instructions on how to install it? I did a search of this forum but I could not find anything.

There has been talk of one possibly being made, but at the moment, one does not exist, to the best of my knowledge.

[B]RhaegarTelcontarTargaryen[/B], a forum user, mentioned that they were interested in making one, but lacks the technical expertise or help to do so. I imagine making one would be quite difficult due to the game and mods involved complexity, I agree however it would be awesome. He also says that he uses them together anyways with some tweaks, though with some minor issues.

I finished my first CK2 playthrough with just HIP recently. After a small break playing other games, I will be adding a combination of different mods for a second. Not sure at the moment which combo I will go with. I would be overjoyed if a compatibility patch came out before I do so.

I have a thread below called "What Mods Do You Use With HIP" below that contains that conversation with Rhaegar, if you have not noticed and are interested with its topic.

IIngriDD - it was actually your thread that made me post this! I've been using EMF and HIP for over a year now and I wanted to see what other mods were compatible so I checked out the forum and found your post and discovered L3T. I tried to play a few games with L3T and just SWMH and I really liked L3T but losing EMF just frustrated me so I never got more than 70 years or so into a play through. Figured I would throw this out in the title to see if I got any bites.
Reactions:

A while ago I looked at making a compatch between L3T and EMF, and Arko shared a picture of the conflicting files: 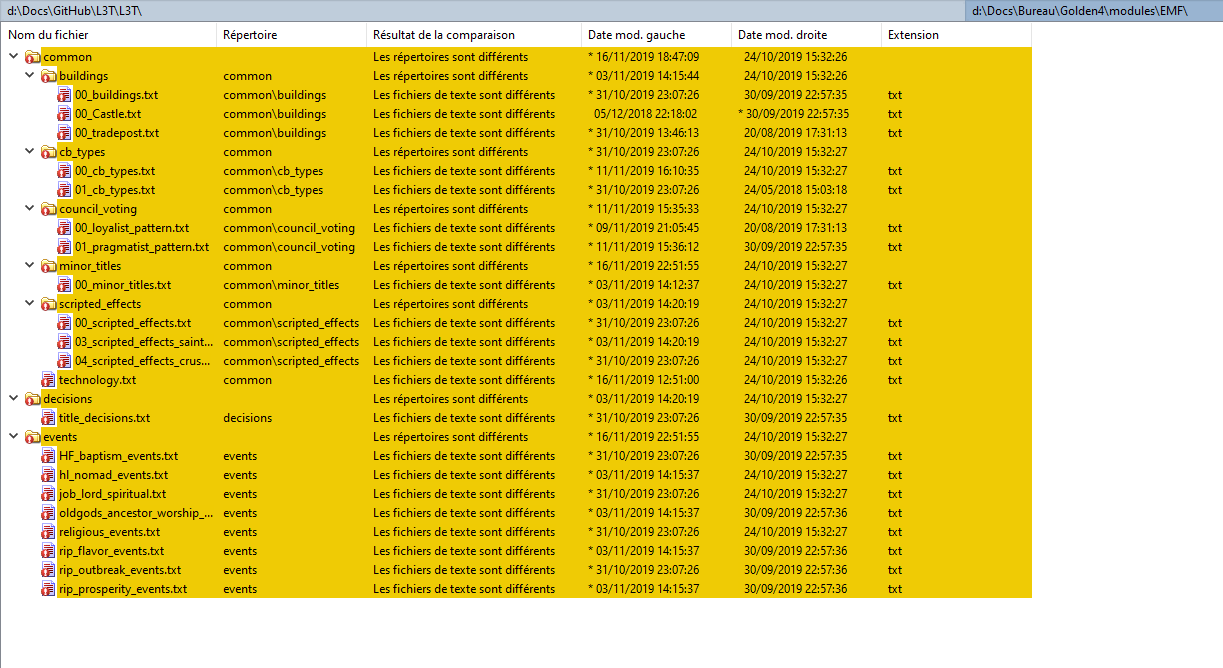 The process is pretty straightforward, you don't need much modding knowledge to get you 90% there. It's essentially copying L3T events, modifiers etc and overriding EMF's.
A tool for comparing and merging files is quite useful in this task. I tried 'grafting' some parts of the mod for personal use and my modus operandi was essentially comparing L3T files to vanilla to see each modification and then move them into EMF's files where appropriate.
Toggle signature
-¡Oh Granada ennoblecida por todo el mundo nombrada,
Hasta aquí fuiste cautiva, y agora ya libertada!
Perdióte el rey Don Rodrigo por su dicha desdichada;
Ganóte el rey Don Fernando con ventura prosperada;
Reactions:

I actually have made a compatch recently, though I haven't had too much time to test it. Moreover I made L3T more EMF compatible than the other way around. Though I quickly made that one tonight. Moreover the buildings map has a bit more conflicting files, since L3T has a different file for each type, whereas EMF and thus HIP still has one file.

Edit: I just saw L3T has a new release, my own patch is not compatible with that version.
Last edited: Jun 17, 2020
Reactions:

Would it be possible for the 3 of you, who have showed a inclination to make a patch, or made one already, to join forces and make a updated community compatibility patch and publicly release it? Perhaps I'am overstepping by requesting so, I'am sure making one and keeping it updated would be difficult, in regards to the technical ability and free time needed to do so. Totally understand if you don't want to or are unable. The new L3T update looks like its quite a significant one.

EDIT: made some grammar corrections, I was tired when I first posted this.
Last edited: Jun 18, 2020
Reactions:

I am willing to try and contribute to making one, however, certain areas of it I am not skilled enough to make it. Buildings part is not that hard, at least I think so, since basically you would only have to change stuff from one mod or the other and balance it out, prices, building time, effects etc.

The thing which would need more work, and where my lack of modding experience is a problem, are events and casus bellis. CBs are not that much of a problem since L3T doesnt change THAT much about them, but if you want to implement both L3T changes to CB and EMF (EMF has fantastic CBs one of the rasons why I cant play without EMF) you would need to make a patch.
Some goes for events.
Toggle signature
The Last With Pagan Blood: Erik the Heathen af Munsö AAR
The Heirs of the King: House de Normandie AAR (ongoing)
My Inkwell
CartographicMap - HIP SWMH map conversion submod​
Reactions:

The mods overlap so much that I don't see the benefit of trying to make everything compatible, since you'd essentially be trying to merge two overhauls that handle things quite differently. I'm too busy for the foerseeable future to work on anything like this, but if anyone wants to try I'd say focus on any one part of L3T that you like the most and try to 'port' that into HIP, a kind of modular approach. I for one was mostly interested in the economy/building side of L3T so I worked on that.
Toggle signature
-¡Oh Granada ennoblecida por todo el mundo nombrada,
Hasta aquí fuiste cautiva, y agora ya libertada!
Perdióte el rey Don Rodrigo por su dicha desdichada;
Ganóte el rey Don Fernando con ventura prosperada;
Reactions:

So, if anyone wants to try and help.. I am not promising anything, but anyone willing to map out all the buildings in the game, and the difference between vanilla, EMF and L3T?

I decided to start with something I can wrap my head around, building modding.. at least I think I can. Events and CBs are mostly beyond my scope (given that I am learning Java IRL I will probably manage to get my mind around it, but it takes time.. a lot of it.. which I don't have.. I digress, back to the topic).

So this is kinda the template, it would be nice to have this for every possible building in game, like this so we can see which mod changes what and how best to balance it out when put together. I have started with cities, but its slow.. painfully slow.

One thing I notice between EMF/HIP and L3T buildings, a lot of EMF buildings give small bonus to retinues and mauls to tax. Also they are a lot more expensive i L3T, although this is balanced out by numerous other resource related buildings in L3T...
The point is, I might make some sort of a patch that implements both, but the balance might not be liked by everyone... anyone having some ideas?
Toggle signature
The Last With Pagan Blood: Erik the Heathen af Munsö AAR
The Heirs of the King: House de Normandie AAR (ongoing)
My Inkwell
CartographicMap - HIP SWMH map conversion submod​

Just writing this shit down takes a lot of time, I wonder what hell would it be to make some sort of a patch.

Anyway, does anyone know, if it is possible at all, to increase vassal limit, but only to a holder of a specific title. And how. I assume modding something in the laws. To be more specific, I want to increase the amount of vassals allowed, ONLY for the Emperor of the HRE. Not all empires, just HRE (because that vassal limit is ridiculously low when going for the restoration of Roman Empire).

Maybe even increasing vassal limit, only when you get above certain number of holdings, +5 for 300, +10 for 500 or so?
Toggle signature
The Last With Pagan Blood: Erik the Heathen af Munsö AAR
The Heirs of the King: House de Normandie AAR (ongoing)
My Inkwell
CartographicMap - HIP SWMH map conversion submod​

Damn, this would be great to have. Thanks, y'all for your hard work!

Well, you could call it like that.. but don't expect a full compatch, and it won't be soon given that I am busy for the next month or so. If this partial compatibility patch ever sees light of day it will be .. well, not soon. Focused on buildings right now.
Toggle signature
The Last With Pagan Blood: Erik the Heathen af Munsö AAR
The Heirs of the King: House de Normandie AAR (ongoing)
My Inkwell
CartographicMap - HIP SWMH map conversion submod​
Reactions:
L

I even tried it, I deleted some files, other things should conflict but I shouldn't be able to tell, one thing I had to choose from L3T over HIP was the buildings, deleting the castle, city and temple files, breaking the buildings in L3T like the city level (hamlet, borough, village, city) because their construction only needs to spend money instead of needing an event.
Toggle signature
My Crusader Kings 2 AAR > Polish Chronicles
EU IV Mods: Buildings Rework
Political ideology: Why not a only single global nation?
Show hidden low quality content
You must log in or register to reply here.
Share:
Facebook Twitter Reddit Tumblr WhatsApp Share Link
Top Bottom