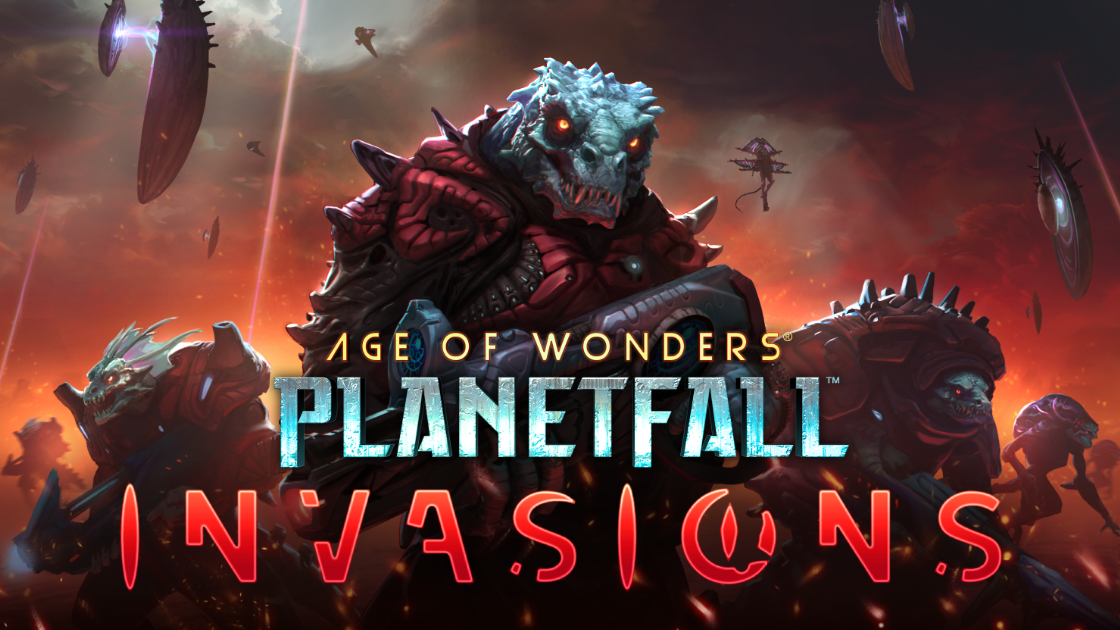 Hello everyone! Today we are announcing the next expansion for Age Of Wonders - Planetfall: Invasions! Invasions will be released on the 26th of May on all platforms, and we’ll be doing a series of Dev Journals and streams to tell you all about it!

The stars of the show are the Shakarn, this new player race are a race of cold blooded lizards who are dedicated to war and conquest, the Shakarn have been lurking on the edges of Star Union space for centuries. The Shakarn have a caste based society, the Domok caste are the soldiers who follow a doctrine of brute force and aggression. 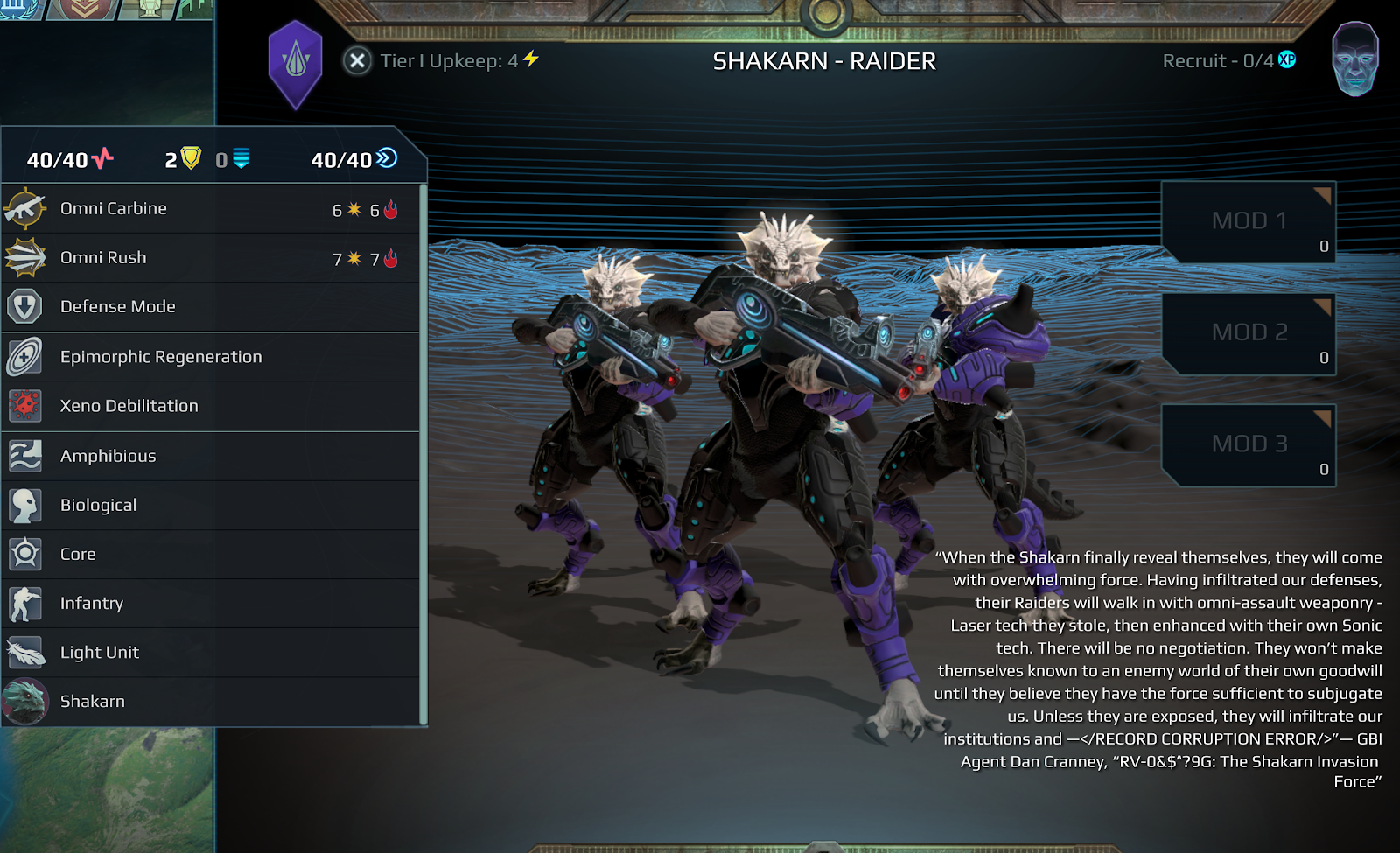 The Raider is the first Domok unit. It’s Omni Carbine is a powerful blaster that combines laser and sonic technology, though it does less damage at longer ranges.

However the strength of the Domok was not enough to threaten the power of the Star Union, so the Zardas caste deployed their infiltrators to spread through Star Union space, probing for weaknesses and searching for valuable weapons technology that could be stolen to gain an advantage. 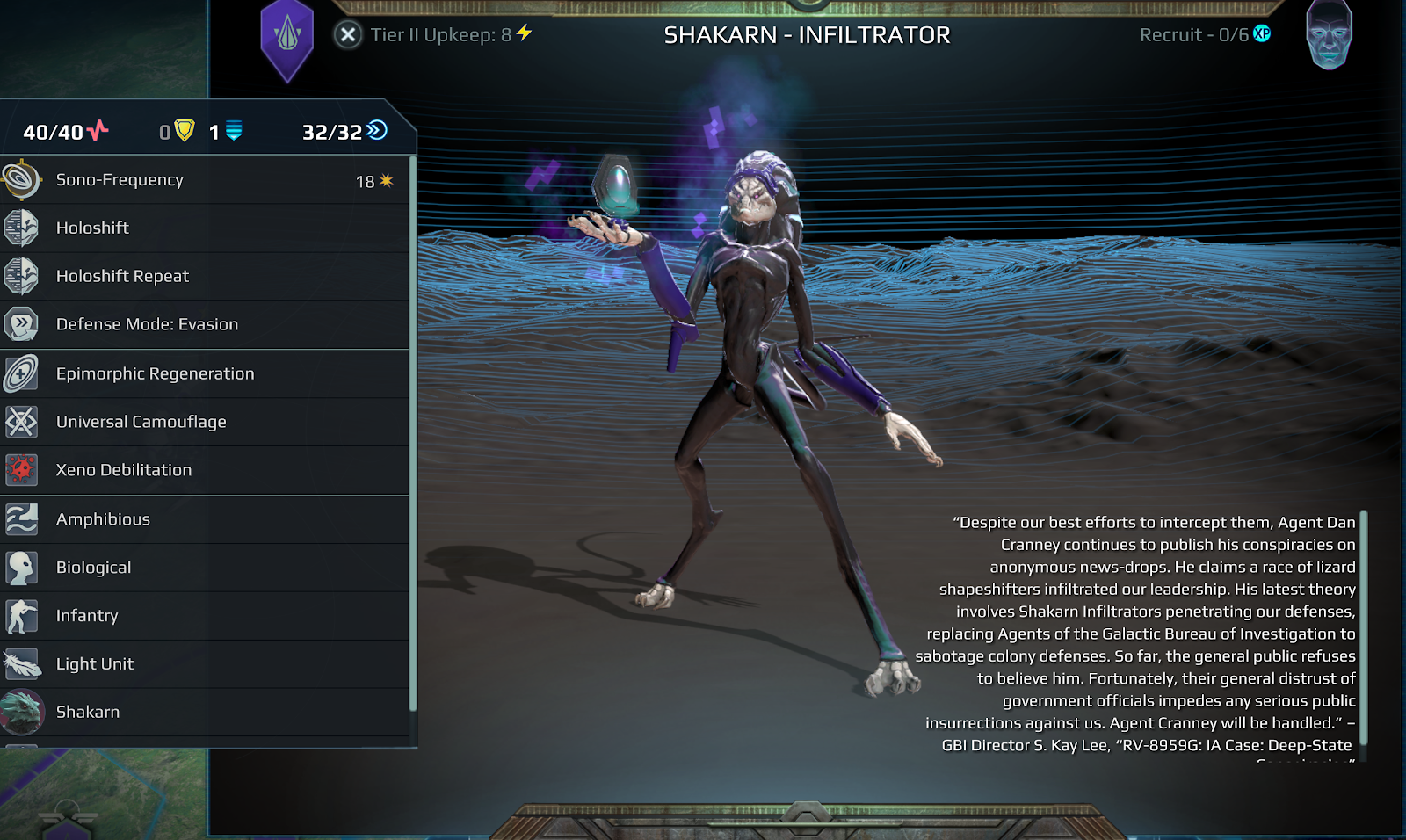 The Infiltrator is the mainstay of the Zardas caste. It may seem weak, but its main strength lies in its ability to take the form of its enemies, and use their own weapons against them.

The Star Union has now fallen, and the Shakarn have decided the time has finally come for them to strike. They know that humanity has failed in its bid for galactic dominance, and it’s time for a new race to rise and take over.

The Shakarn will be getting a new 2 mission campaign to tell their story, and we’ll be making a new Dev Diary soon to go into detail about how they work!

The Voidbringers
The Shakarn are not the only dangers that have been lurking out in the void, a group of beings known as the Voidbringers have also been stirring, and have chosen this moment to make their appearance.

Distantly related to the Psifish, the Voidbringers deploy armies of enslaved thralls to try and take over the planet. They cannot be bargained with or befriended, your only options are to fight for your survival or submit to the slavery of the void. This even is bad news for ranged armies, but on the other hand now might be the perfect time to launch a major sneak attack.

And much more!
Still to come we have:

There’s still lots of streams and dev diaries to come where we’ll be looking at all of these things in closer detail!

Invasions will be available on all platforms on May the 26th.
Expand signature
Be the person your dog thinks you are

EDIT: I can't belive how well I predicted this (sorry for boasting)

My other prediction was "cryo" damage channel, alas we're getting "sound" channel. Why didn't I think of that? (and anyone on this forums to that matter if I recall)

Oh no the shadow demons are back, how did you survive AoW2!
Expand signature
"I've been tinkering about you"

- Every paradox game ever

Neat, so it's Draconians which is the one I wanted the most. Still hoping for Expansion 3 to have Orks\Tigrans

Mr_Dias said:
Neat, so it's Draconians which is the one I wanted the most. Still hoping for Expansion 3 to have Orks\Tigrans
Click to expand...

Theres a lion/tiger person from the NPCs on the screenshots on the main website!

And we still got Therians left...

Regarding Shakarn. I suppose many people will say "meh, a generic Lizard faction", but I think they are well suited for the game. People wanted an alien faction so we are getting something totally out of the Space Union. It all sounds pretty cliche at first: an alien, somewhat shapeshifting "invasion" style of race, but it fits the lore of previous games and overall aesthetic of Planetfall (how could we not get retro lizard like invaders from space? Invasion of the body-snatchers anyone?). With shapeshifting abilities it's also pretty logical for them to be able to apply various mods.

Some of them look pretty strange though, really thin and skiny, I hope we will get a bulky, big tank 5+ meteres tall kind of a Lizard

EDIT: Ah ok, just watched the trailer... a bulky lizard that seems to be moving on all fours is also in their rooster.

Ah Tibbles, you sneaky guy you Space Lizards and Cats? Why not both. Triumph guys are so predictable. But I love you for that

EDIT: Wait a second, they are not cats per se but... a full-fledged Furry race!

Damn I need to digest all thsi stuff...

can't say no to dragonborn in spaaace
Expand signature
"Agreed. We need elephants in the seduction schemes."
By Razmorg

So the devs covered much of the stuff/ideas that were mentioned on this forums.

I've analyzed the screenshots and the Shakarn really remind me of Draconians, they are actually more of a Dragon race then anything (they have variants with wings).

PS: Therians have something that looks like werewolves so another of my fav type of "anthropomorphs" makes it into the game.

PS 2: And the Shakarn leaders look so cool, I hope we will get a lot of customization options
Last edited: Apr 16, 2020

Just looked at those, thanks for a hint!

Okay, that only leaves an Ork variation and this franchise will be complete

OMG! Thank you, Triumph! I am so hyped right now! I've been waiting for this! Best news of this lonely Spring!

Everything is Super and alright with one exception - We still cannot 'terraform' planet(s) just like in AoW3. Amazons and Dvar can turn sectors either forest or vulcanic wasteland (If I am not wrong Purifiers, too) but what about void,swamp, sand, green terrains terraforming? If I would be a real Vanguard Commander not only I construct colonies and fight hostile factions but also change destroyed planet (Vulcanic, deserts etc.) for our colonists to be something more friendly like green landscapes.
Reactions:

LIZARDS! Thats great.
I hope Voidbringers are more than another NPC faction differently named. They need to have some long term quest, some bonuses for fighting and defeating them. Also a big invasion that forces players to temporarely ally or be destroyed. This could be interesting. OK I've read there will be something like invasion. Thats nice.
World events seems to be a letdown. We will see whats more in it.
More everything is always welcome

How do double channel attacks work? 12 damage would be really high for a repeating attack on a t1, but really awful for a single action.

Also, all the Shakarn appear to have amphibious. Could they actually get water colonies?
Expand signature
“When I became a man I put away childish things, including the fear of childishness and the desire to be very grown up.”
C.S Lewis
T

As cool as the Therians look, I hope this doesn’t automatically rule out a playable faction of humanoid mammals.

I knew this expansion would be called Invasion! Somehow I knew the theme would be used, and I am so glad we get our race of warrior invader aliens! I am also glad they look high tech yet savage and their roster looks pretty slick so far! Oh Triumph, you guys never disappoint me. You always give me exactly what I want even if I don’t know it! I cannot wait to conquer the Star Union with the Shakarn!

The rest of the expansion is icing on the cake. I love the idea of new late game invasions by an assimilating race (Looks like the voidbringers assimilate units from other factions, as the screens show a variation of assimilated therians and kir'ko with void effects on them (Kinda like psi-fish parasites).

And the Therians look interesting (I wish they were playable too).
Last edited: Apr 16, 2020

Xeno Debilitation.
I wonder... perhaps they're not fully compatible with the human based terraforming.
Do they start with some sort of malus that they have to mod/research around, maybe?
Expand signature
Friendship is mandatory. Violators will be hugged.

Please, tell me there will be new songs! I'm listening to the same songs over and over. The last expansion songs simply won't play for me at all, so I'm basically hearing the same songs from launch over and over lol help me
Show hidden low quality content
You must log in or register to reply here.
Share:
Facebook Twitter Reddit Pinterest Tumblr WhatsApp Email Link
Top Bottom