The old project of me and Mehmet12, the Anatolian war mod is finally more or less finished. If you don't know what's this mod, which is probable, let me tell. This is just another alternative history modification. In this history, Greece won the Greco-Turkish war, hellenized west Anatolia, set new capital into Istanbul and formed Pontian and Cappadocian Greek puppet states in central and northern Anatolia. In south Assyria and Kurdistan declared independence, controlling parts of Turkey, Iraq and Syria. Also Armenian Democratic Republic is independent and rules huge parts of Turkey. Now Turkey rules only small part of Anatolia and it's army is obsoloted and going to be overrun by Greeks and another invaders. Greece and the Megali idea are the major powers of Balkan and Middle East. 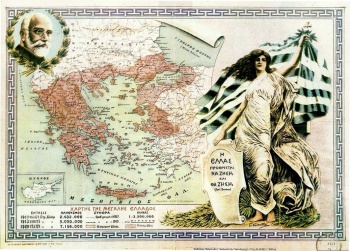 The political map in Arabian peninsula, Anatolia and Black Sea
region is divided into small nations

Makers of mod are
Mehmet12 - starter, made almost all ministers, leaders, tech teams, map and graphics
Miihkali - some things on the map, OOBs, some of graphics, events and map modding

also Osttruppen, Yourworstnigtmare and Britnavfan gave very good ideas, thoughts and proposals for mod, and we are very thankful for them.

Current version is 1.05. Mod works at least with Armageddon, and I'm almost sure that it works also with Doomsday and it's possible that it also works with Vanilla HoI2. The nevest version isn't completely tested and it's possible that there's bugs, especially in event timelines. If you see events like first Georgia selects 'We will smash Azerbaijan' in 'Relations with Azeris' event and next day launches event named 'Alliance between Georgia and Azerbaijan is now forged', use your brains and report a bug Enjoy!


DOWNLOAD
Anatolian Wars 1.05 (the actual game, db etc.)
New map (needed or game doesn't work)
Game graphics (game works without, but very highly recommended)​
By the way, if you want to play as Kurdistan, and want another flag, there's flag of Kurdi Kingdom It's made by Mumia.

Feel free to post comments, ideas, your own files (events, graphics) or anything else about this mod. And report bugs, if you find any. I'll make updates, if anybody is interested.

Shouldn´t there be more techteams for Greece? The vanilla ones sucks.
Toggle signature
Jesus loves you. Everyone else thinks you're an asshole.

brilliant, there goes the rest of my Christmas night.

Good stuff, Miihkali! I could never get the hang of those events we had to make. Greece + Pontus are really, really tough. My first try as Greece led to me easily annexing Turkey, then rushing back to Northern Greece to save it from the Yugoslavs, who had declared war on me. Next thing I new, I was in Nov Pazar!
Maybe in the next update we ought to consider giving the Turks more troops, or at least stronger ones. They can easily defeat the Cappadocians and have an excellent navy which can defeat the Pontine and Greek ones combined, but that's nothing compared to sheer size of the Greek and Pontine armies when united.
I have managed to find loads more minister pics, leader pics, and techteams for Pontus and Assyria. I'll edit the minister files and send them plus the pictures back to you.
Oh, and I have some province pictures for Ankara, Sinope, Athens, Salonika and Istanbul you can have if you wish.
Merry Christmas, all!
Toggle signature
Founder and developer of the
Anatolian Wars Mod, co-developer of Whites & Reds.

I love that "greek propaganda map" in the first post, where did it come from?

Biges said:
Could you upload it to a different server? I'm really fed up with the need to register everywhere... http://uploaded.to/ is a good hosting service.
Click to expand...

You don't need to register anywhere. There's introduction to download

Nicophorus: Mehmet12 found it. It seems it's in some kind of Greek wiki http://wiki.phantis.com/index.php/Main_Page
Toggle signature
Mikael "Miihkali" Tuominen

There is no download link to anywhere except Imageshack.us.

As far I know, there's download link. It's between Kurdistani flag and those maps.
Toggle signature
Mikael "Miihkali" Tuominen

It's from Kaiserreich and I use it always, in every games I play. I'm not sure if it's allowed to put it in other mods.
Toggle signature
Mikael "Miihkali" Tuominen

Yep. But I haven't "template" of flag. Is it possible to convert shield to flag?
Toggle signature
Mikael "Miihkali" Tuominen

Don't worry- that flag is actually one more or less invented by me. I used the current Armenian flag and added the Democratic Republic of Armenia's logo to it in order to differentiate it from the regular Armenia released in HoI2.
Toggle signature
Founder and developer of the
Anatolian Wars Mod, co-developer of Whites & Reds.

Does Armenia have any extra ministers?
Toggle signature
"Morality may consist solely in the courage of making a choice." - Leon Blum
"How much easier it is to be critical than to be correct." - Benjamin Disraeli
Show hidden low quality content
You must log in or register to reply here.
Share:
Facebook Twitter Reddit Tumblr WhatsApp Share Link
Top Bottom