Jump to latest Follow Reply
Menu
Install the app
You are using an out of date browser. It may not display this or other websites correctly.
You should upgrade or use an alternative browser.
Age of Wonders: Planetfall 1608 Bug reports 1611 Suggestions 534 User Mods 92 AoW: Planetfall: News and Updates Archive 41 Multiplayer 53
Showing developer posts only. Show all posts in this thread.
Show all posts 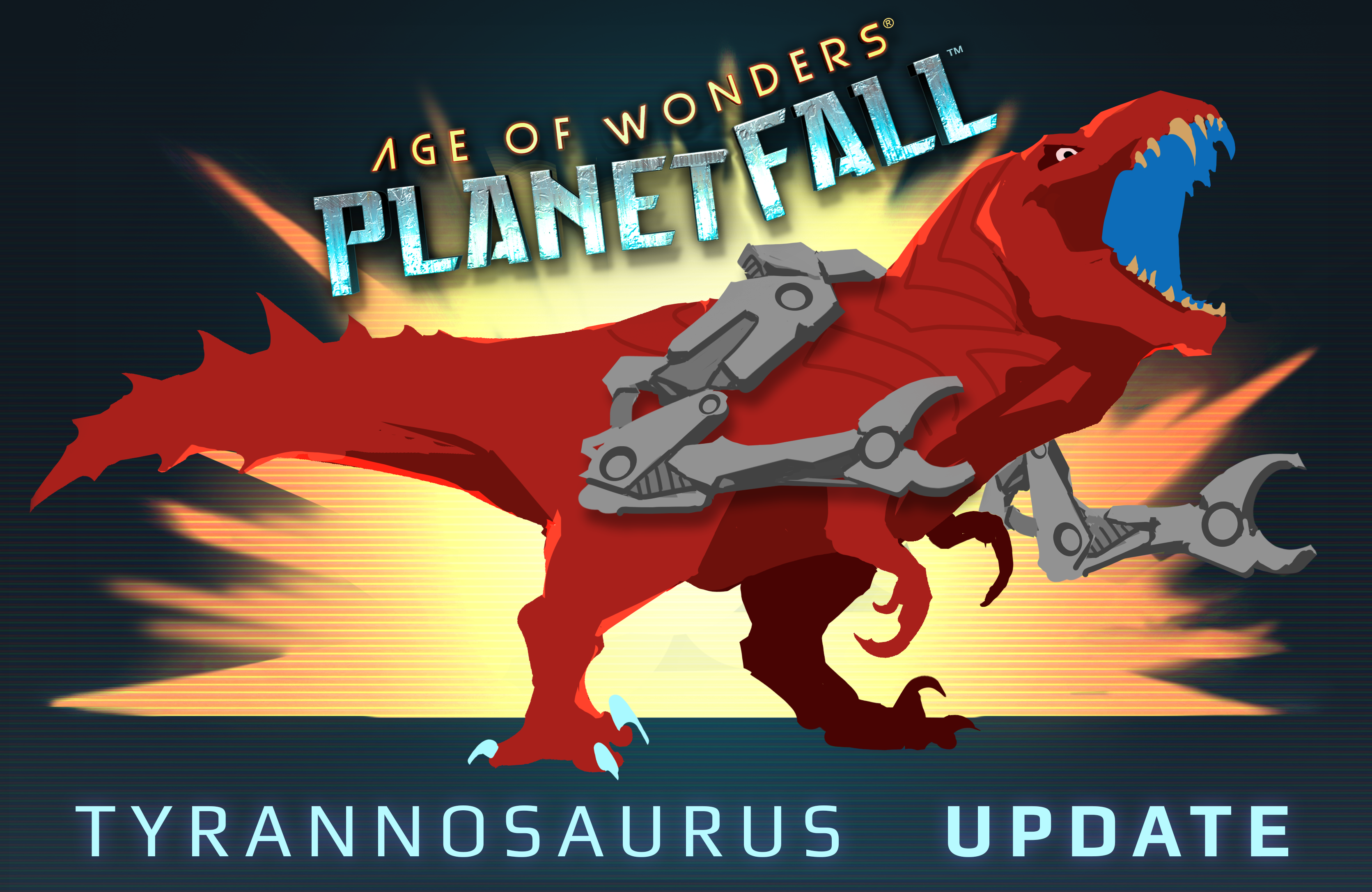 Over the last few months we have been working hard on the “Tyrannosaurus” update and it definitely does its name justice! Based on community input and findings, some major changes were made to the game. Here we highlight the biggest features and changes; for the full list of change notes, check the bottom of the post. But first, check out this sweet trailer.

Game Intensity Controls
A number of settings have been added to the game setup options to control the amount of push back the world gives to the player. These options can be used to make enemy players, NPC factions and spawners more passive to give a more relaxing game experience, or more active to up the game’s challenge.

These options can be edited separately under Advanced Settings, or are controlled under a master Game Intensity setting in the main setup screen.

No Colonizer Mode
An old favourite from previous games in the franchise; No Colonizer Mode blocks the ability for all players to build colonizers to create new colonies (a limited number of colonizers can be gained from the settlements pre-placed on the map). This leads to a game with much smaller empires, where the focus is more on the game’s military aspects than its economic ones.

Exploration Sites
A number of locations, primarily Visit Sites which would give temporary bonuses to the armies that visited them, have been reworked, remodelled and rebranded as Exploration Sites. These sites are heavily guarded and each has its own unique interior combat map. Once captured, each site has a unique buff it grants to units produced in the colony it is linked to, as well as giving a powerful economic bonus.

Fleeing Enemies
In order to reduce the number of battles the player needs to fight, weak enemy stacks will now occasionally ask for mercy, allowing players to claim their location without a combat encounter. Additionally, stronger stacks will sometimes allow players to bribe them to leave.

Streamlined Terrain Interactions
The terrain in Planetfall gives boosts to the economic structures built within them, for example a Forest sector gives bonuses to Production and Food bases. The update changes these bonuses to always apply, rather than requiring the player to research and build special colony upgrades (i.e. a food sector built in a forest sector will now immediately go to level 2, without requiring the Forest Exploitation technology first). This makes the system much easier to understand, and allows players to experience the bonuses from terrain much faster and more organically.

Since these terrain bonuses also affect the strength of the special upgrades that can be built in sectors, those also become more interesting and useful to the player.

Rebalanced Economic Research
The streamlining of the terrain interactions has meant we could remove a number of techs from the economy tree, which was generally felt to be overloaded. To take this further, a number of other techs have been removed and the tree has been rebalanced in order to make systems more useful.

Simplified Colony Economy
We’ve gone through the various economic bonuses the player gains from various sector upgrades and re-arranged them to make them easier to grasp. At the same time, a number of upgrades have been rebalanced to make them more useful, and less reliant on micromanagement to make the most of them.

Razing Colonies and Sectors
The player now gains resources of various types for razing enemy colonies and sectors. This provides more incentive for defending players to actively defend their territory rather than hiding in their cities. It also incentivizes players to destroy captured colonies, rather than keep them, leading to smaller empires which are easier for the players to manage.

Racial Starting Bonuses
In order to make the differences between the races more well defined, each race has been given a short term bonus that is immediately active from the start of the game, and a long term bonus which affects the race for the duration of the game.

Xenoplague Streamlining
The Xenoplague secret tech now allows players to start with a Pustule unit and start spreading the plague from the first turn. Previously, this defining aspect of the tech was locked behind research, so the player was forced to get particular techs before they could enjoy the main feature of the Xenoplague.

Amazon Animal and Forest Gameplay
The Amazons have unique world map gameplay mechanics based around capturing wildlife units and spreading forests, which we felt were underperforming. The operations for creating forests have been made cheaper, and more bonuses have been added for the player to research that improve the bonuses forests grant. Amazon controlled wildlife now gain an inherent stat buff to make them more useful, which can be strengthened through research.

Also, the many types of wildlife now evolve, allowing the player to capture a weak unit early in the game and watch it evolve into a more powerful one as the game progresses. A new, end game operation has also been added allowing the Amazons to control the powerful end game wildlife that was previously unavailable.

Rebalanced Covert Operations
We’ve taken a look at the covert operations tree, rebalancing the operations to make them more useful as well as adding a new cosmite stealing operation to make the end game more attractive. The distribution of Operation Strength/Defense bonuses in the tree has been rearranged to give players who focus on covert ops more of an advantage.

A tooltip has also been added to the covert operation targeting interface that breaks down the chance for the operation to succeed as well as providing information on what the player can do to increase that chance.

Operations Interface Improvements
The operation launching interfaces have been rearranged to make it easier for the player to see what they have available and what they have active. This was achieved by merging several tabs, so the player can see everything on screen at once without needing to flip between different lists.

War Coordination Improvements
The system the player uses to coordinate attacks with their AI allies has been rebuilt to make it more responsive and transparent. AI players can now be directed to attack and defend specific locations, and will send more messages to give feedback to the player about when they complete or fail their tasks.

Trading and Diplomatic Offers Rebalancing
In order to make certain trade deals and diplomatic offers more worthwhile for both the player and AI, many of the trade items have received balancing. The prerequisites for peace deals and vassalage offers have been tweaked so it makes more sense when they occur.

More Readable Units
We have done a number of tweaks to how units are rendered to make them pop out more on the world map and in combat. This is to address issues that units were often hard to see when they stood on certain types of terrain.

Clearer Overview Map
The overview map, which is viewed by zooming out to the max level on the world map, has received a pass to make the icons that appear on it more consistent and useful. Economic icons now receive a red outline when they are occupied by the enemy, to make it clearer to the player where potential issues with their economy lie.

Owned sectors are now fully colored, instead of only showing the borders, giving a clearer overview of each domain on the map.

Clearer Level Tooltips
The text tooltips that described the effects of doomsday weapons and leveled sector upgrades have been given a pass to make them clearer, shorter and less overwhelming, making them much easier to read and understand.

Better Army Compositions
The strategic AI is now better at building higher level armies of more varied units, and is less likely to create monotonous armies of low level units. When reaching a certain phase of a game, they are now more inclined to create higher tier units as well. Additionally, the unit modding process for AI was improved to ensure the AI players upgrade units that already have mods with better mods once they become available.

Prioritization Improvements
AI players would often prioritize attacking independent armies and become overly defensive when opponents built up their military. With the update a lot of these weaknesses have been tackled and the AI has become a lot better at setting clear goals that result into more interesting interactions with players.

Tutorial and Practice World
We have done a pass on the game’s tutorial and the early campaign maps to address complaints that they were overwhelming for newer players. Upon completing the tutorial the player will now receive a suggestion to play a curated Practice Game before jumping into the campaign, since we feel that the early Campaign maps are simply too much for a new player to attempt directly after the tutorial.

Lots of Balance Changes
The update contains a HUGE number of balance tweaks to units, operations, and unit upgrades. These have been based on feedback from the community, with a focus on improving the balance of the PvP aspect of the game.

Fixes Fixes Fixes
Like any update, this Update contains a large amount of bug fixes. Thanks to the community for reporting the issues so we can continue improving the game!

Rafoca said:
According to people on twitter, the Xbox version is crashing to the dashboard after the update =/
Click to expand...

Xbox was having issues earlier today but a update has been out for a couple of hours which fixes that issue. Xbox system should Auto-Update but if they don't you can always manually update.
Toggle signature
Quality Assurance
Report an Issue for Age of Wonders: Planetfall
Report an Issue for Empire of Sin

Dethkiss said:
I just bought Age of Wonders and am wondering how to update to Tyrannosaurus? Do I have to purchase the expansion first?
Click to expand...

If you just bought it you should be up to date, if your ingame version number is 1.200 then you are as fresh as you can be.
Toggle signature
Quality Assurance
Report an Issue for Age of Wonders: Planetfall
Report an Issue for Empire of Sin
Show hidden low quality content
You must log in or register to reply here.
Share:
Facebook Twitter Reddit Tumblr WhatsApp Share Link
Top Bottom