Menu
Install the app
You are using an out of date browser. It may not display this or other websites correctly.
You should upgrade or use an alternative browser.
Age of Wonders: Planetfall 1522 Bug reports 1538 Suggestions 531 User Mods 79 AoW: Planetfall: News and Updates Archive 41 Multiplayer 53
Show only dev responses 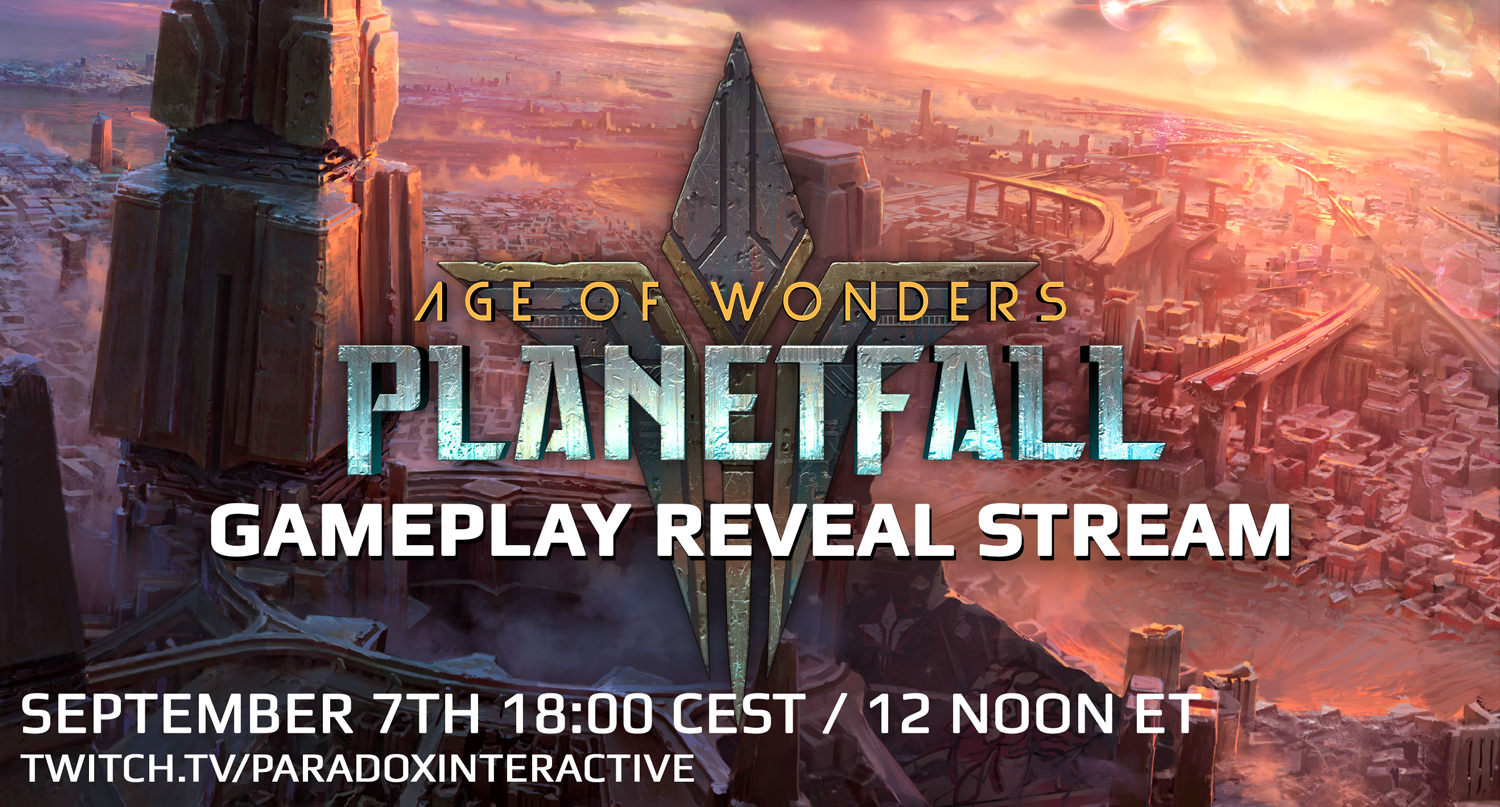 Good afternoon! Today we have some great news to share with you all. It's finally time to show you some new footage and invite you to the first official Planetfall Gameplay Stream!

This event will take place on September 7th, 18.00 CEST/12 NOON ET right over at https://www.twitch.tv/paradoxinteractive.

The livestream will later be published on our Youtube channel, so for those of you who can't make it, fear not!

We hope to see you on stream!

Cheers,
Emma
Last edited: Aug 31, 2018
Toggle signature
Be the person your dog thinks you are

The hype is real!
T

Looking forward to finally getting to see some Dire Cyborguins.

Damn, couldn't you have announced this like 5 mins before it starts so we don't have to wait?
Last edited: Aug 31, 2018

"Hey guys, we're starting a live stream in five minutes. Come on over to our channel and watch us!"

Anyway, the time works great for me, but I am certainly curious as to how long you guys expect the stream to be? @emmasterakia

The longer the better, in my mind, but I'm expect it won't be longer than, say, four hours. That, and the first thirty minutes or may be spent on an analysis of the map customizing and faction creation screens. Maybe they'll even let audience input into which faction and secret tech gets played! Unless they just do an in-media-res kind of thing, loading up a game, or starting the stream with the game already running.

Jean-Luc said:
Damn, couldn't you have announced this like 5 mins before it stars so we don't have to wait?
Click to expand...

This, very much this!
Still great news! Looking very much forward to next Friday.

Now who will be doing the stream? Lennart? Djurre? Tom? Arno?
Throw us a small bone here.

LordTheRon said:
This, very much this!
Still great news! Looking very much forward to next Friday.

Now who will be doing the stream? Lennart? Djurre? Tom? Arno?
Throw us a small bone here.
Click to expand...

(in the Planetfall Discord)
"emmasterakiaToday at 8:17 AM
We have Lennart joining us for this reveal, so you do not want to miss it!"

Ha I had a feeling it was this!

Marking date and time in calendar.

Are thier any good discord channels for planetfall?

https://discord.gg/9sv9t8 Is a server a lot of people are on. It's a fan server, but a couple dev's have been sighted.

Fenraellis said:
Anyway, the time works great for me, but I am certainly curious as to how long you guys expect the stream to be? @emmasterakia
Click to expand...

ICYMI: We are also having a Q&A on the livestream on Friday. Ask your questions directly in this thread: https://forum.paradoxplaza.com/foru...lanetfall-gameplay-reveal-q-a-thread.1117389/
Toggle signature
Be the person your dog thinks you are

I just got done watching this. Load the ships, buckos, it's time for Planetfall!!!

Enjoyed the stream, hope there will be more in the future!
Toggle signature
​

I missed it when it becomes available on youtube, can it be posted here (as announcement or link) or on the pertinent topic? That would be awesome for the people who missed (and probably for others that want to re-watch some fragments)
Cheers
Toggle signature
I must not fear. Fear is the mind-killer. Fear is the little-death that brings total obliteration. I will face my fear.
I will permit it to pass over me and through me. And when it has gone past I will turn the inner eye to see its path.
Where the fear has gone there will be nothing. Only I will remain.

The vod was probably available quickly after the stream ended: https://www.twitch.tv/videos/307085691?collection=cOr2a6Q_UhWBow