Menu
Install the app
You are using an out of date browser. It may not display this or other websites correctly.
You should upgrade or use an alternative browser.
Age of Wonders: Planetfall 1532 Bug reports 1554 Suggestions 531 User Mods 82 AoW: Planetfall: News and Updates Archive 41 Multiplayer 53
Show only dev responses 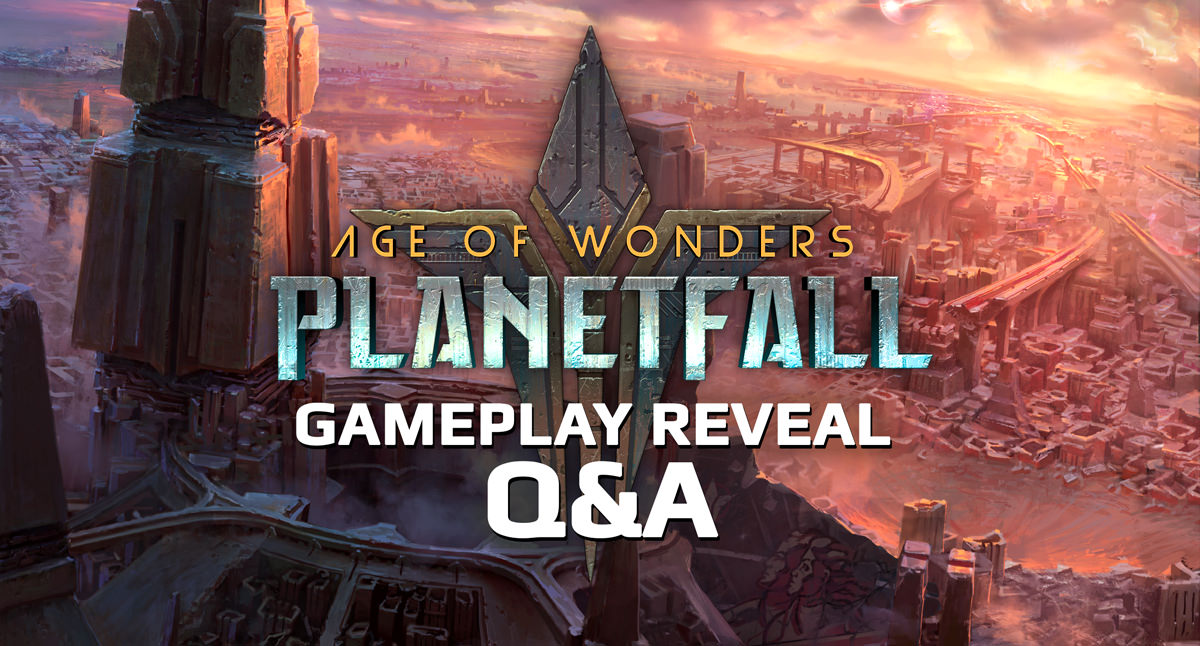 It's finally the week of Gameplay Reveal and I'm sure you all have a lot of questions. That's why I'm excited to announce that we will have a Q&A segment on the livestream as well.

Please use this thread to ask all the relevant questions you might have and we will do our best to answer them in the Friday Gameplay Stream over at: https://www.twitch.tv/paradoxinteractive.

Cheers,
Emma
Last edited: Sep 3, 2018
Toggle signature
Be the person your dog thinks you are

I won't be able to watch live I'm afraid But I'll certainly watch the VOD later several times... So here I made a small wishlist:

Do's:
- Talk a bit about the different secret techs you can choose at the beginning.
- Please engage in as many different diplomatic relations with NPCs as you can manage during the stream
- Please talk about as many overland structures as possible and show how the surface can be terraformed
- Show this Kir'Ko unit that can swallow a unit and shit out an egg that spawns another unit under your control in action please (If you are not playing Kir'Ko, have the decency to be swallowed by one)
- If anyhow possible during the stream try to win a non-military victory.
- I'd be most intrigued if you played a faction we know least about (so Assembly or Syndicate)
- Any chance to get a release estimate that is slightly more accurate, maybe you can say something like 1st quartal of 2019?

Don'ts:
- Don't spend too long showing off all the fancy cosmetic options you can make your leader look (as tempting as it may be)...
- Don't spoil or tease the campaign, play a random generated map if possible.

I have a million questions! But il try and limit it to 3 broader ones, would the team mind explaining how racial tech works with research and if it can have branching? (Choices)

And would they mind explaining how the economy works and will thier be builder units that build towers, etc or on top of resources?

And lastly expanding on some info on diplomacy point system, (where you can instead buy mercenarie units). And what other features it might have.

Thankyou! Its like asking for 3 wishes from a genie and hoping i asked the most relevant.

Also any insight on features you might be brainstorming or toying with but not confirmed would be nice!
Last edited: Sep 3, 2018

I'd like a closer look on research. How it works, whether there are tech pools or a tech tree and so on.

Can you guys please explain the game in a way that someone who knows nothing about how Age of Wonders works, can get somewhat of an idea? The dev diaries are all written in a way that the devs expect you to know what is being talked about rather than explaining in more depth. I don't mean entire paragraphs, but explaining how the gampelay is structured (do you travel to different planets over the course of the game, conquer them and add them to your empire, travel from planet to planet like a quest with the goal to complete all objectives before moving to the next leve planet etc). Stuff like that.

I suspect the gameplay reveal will answer most questions like these, but some backstory and going into more depth about the way mechanics work than expecting you to know the basics already, would be helpful.

Also; will there be an actual, helpful tutorial?
Toggle signature
Pssst hey kid, you want some DLCs? First one's free

will there be fractions or something similiar?
and Will there Be Undead
S

I have 4 main questions about the game, otherwise i'd have to make an entire powerpoint presentation to ask everything.

1. Heroes and units, how will they work and will the heroes just become murder hobos to rival the gods, or are they capable of more, for example espionage and statecraft maybe?

2. In terms of setting can the game be considered a future universe of the Age of Wonders games before it?

3. In continuation of the last one - what nations and races will there be, if you could show off the different civs and minor civs possibly during the stream?

Can you please show or talk about terraforming possibilities? (Like Arctic Empire from AoW 3)
Q

To be honest, I'd love to see the Vassal system in action. Is it useful or just a fancy gimmick? How well do AI-AI Vassal-Master systems work etc.
W

I'm really into hotseat gamemode, playing with my friend pretty much every weekend. To that effect...

1) You do release with hotseat gamemode right? (I'm sure you will but knowing for certain will make me happy )

2) strategic timelimits was a thing in aow3. Would tactical timelimits be added to that feature set?

Please show at least 1 tactical combat completely played out manually, so we can get a feel for how that's going to work.
S

Will there be that really nice PBEM support like in AOW3?

Tooltips. All the tooltips!

-- Really, though, without wasting excessive time(people can pause the youtube video later), try to mouse over(a full tooltip, not a passover blink, please!) as much as is reasonably possible. Loadouts, Structures(City Buildings and Map), Unit Traits, Unit Mods, Techs, and so on and so forth.
We're fine with typos, as I would like to think that most of is know it's one of the last things that gets fixed, due to translation work anyway.

-- Otherwise, I mostly am in line with Fluksen and Gloweye, especially Fluksen's point about playing Syndicate/Assembly, if feasible. I mostly just want to see something other than Vanguard/Promethean which has been the headliner most of the time so far. If Vanguard is to be the one played, please at least run with a different Secret Tech, after a quick review of all of them. Perhaps even let the chat run a quick vote to pick for you.

-- As for something not mentioned so far, I would hope we can see how the Doctrines system works, as it seems to replace potentially both Empire Upgrades and Global Enchantments. We know there are limited slots, we know you have more choices than slots(especially with owning Landmarks), but we don't know about costs, or implementation of activating and deactivating them. Let alone their effects.

-- Perhaps most importantly, though...
Go wild! Try out unusual combinations of Units and Mods. Show off different unit abilities, both friend and foe. Don't play for optimization, but for fun, for yourself and the viewers. Maybe it would normally be better to befriend that NPC-Faction, but if you do, we might not see that side of Diplomacy, or the weird abilities of their units in combat(if not encountered yet on the map). Of course, this is mostly in juxtaposition with also befriending a different one, so we do get to see that process.
Q

WeirdoInTheWormstore said:
You do release with hotseat gamemode right? (I'm sure you will but knowing for certain will make me happy )
Click to expand...

I'll add LAN to that. I remember when AoW3 launched, there was trouble for many people to connect to the master server due to routers (including, but not limited to people living in dormitories), I assume this will not happen again.

I'd also love a discussion about the Psynumbra. We have been told they are from the Void (as they appear at the Rifts), as are the Shadow Demons. Cosmite is a resource also from the Void. What does this mean for the connections between AoW pre-PF and AoW PF? Are the Psynumbra just Shadow Demons that have been experimented on by the Star Union (trying to combine them with Cosmite for extra groovy Demons)? The discussion does not need to give away too much about the Campaign, but some clarifications and dev theories would be nice.

Any changes to stealth mechanics like invisibility, concealment, etc?

More background lore would be nice, especially about the major factions we haven't been focused on so far (Dvar, Amazons, Assembly, syndicate)
Toggle signature
“When I became a man I put away childish things, including the fear of childishness and the desire to be very grown up.”
C.S Lewis
E

If it's a thing, can we get some detail on how diplomacy will be made interesting?

I know a lot of games like this have a diplomacy that barely matters outside to exploit it (civ for example). Endless space/legend did a decent job of making it matter by requiring a resource to use it and having races focus on it (although it's still lacking in depth).

What kind of approach are you taking with pvp diplomacy, or will it not really be a factor?

What is the setup for the campaign? Custom Leaders vs Preset characters? One single campaign track or multiple tracks by faction? Branching within a track?

Most of my other questions have been asked in some form or another so far, but to add to the following:


Fenraellis said:
Tooltips. All the tooltips!

-- Really, though, without wasting excessive time(people can pause the youtube video later), try to mouse over(a full tooltip, not a passover blink, please!) as much as is reasonably possible. Loadouts, Structures(City Buildings and Map), Unit Traits, Unit Mods, Techs, and so on and so forth.
We're fine with typos, as I would like to think that most of is know it's one of the last things that gets fixed, due to translation work anyway.
Click to expand...

I'd like to see as many menus and UI functionality as possible.

What are the races in the game?

I was wondering about the empire growth mechanics in this game: