Hello there! Today we're going back to the world map, and starting with an overview of the global resources in Age of Wonders: Planetfall. Next to some familiar items from Age of Wonders III you’ll notice that there are many changes and additions. 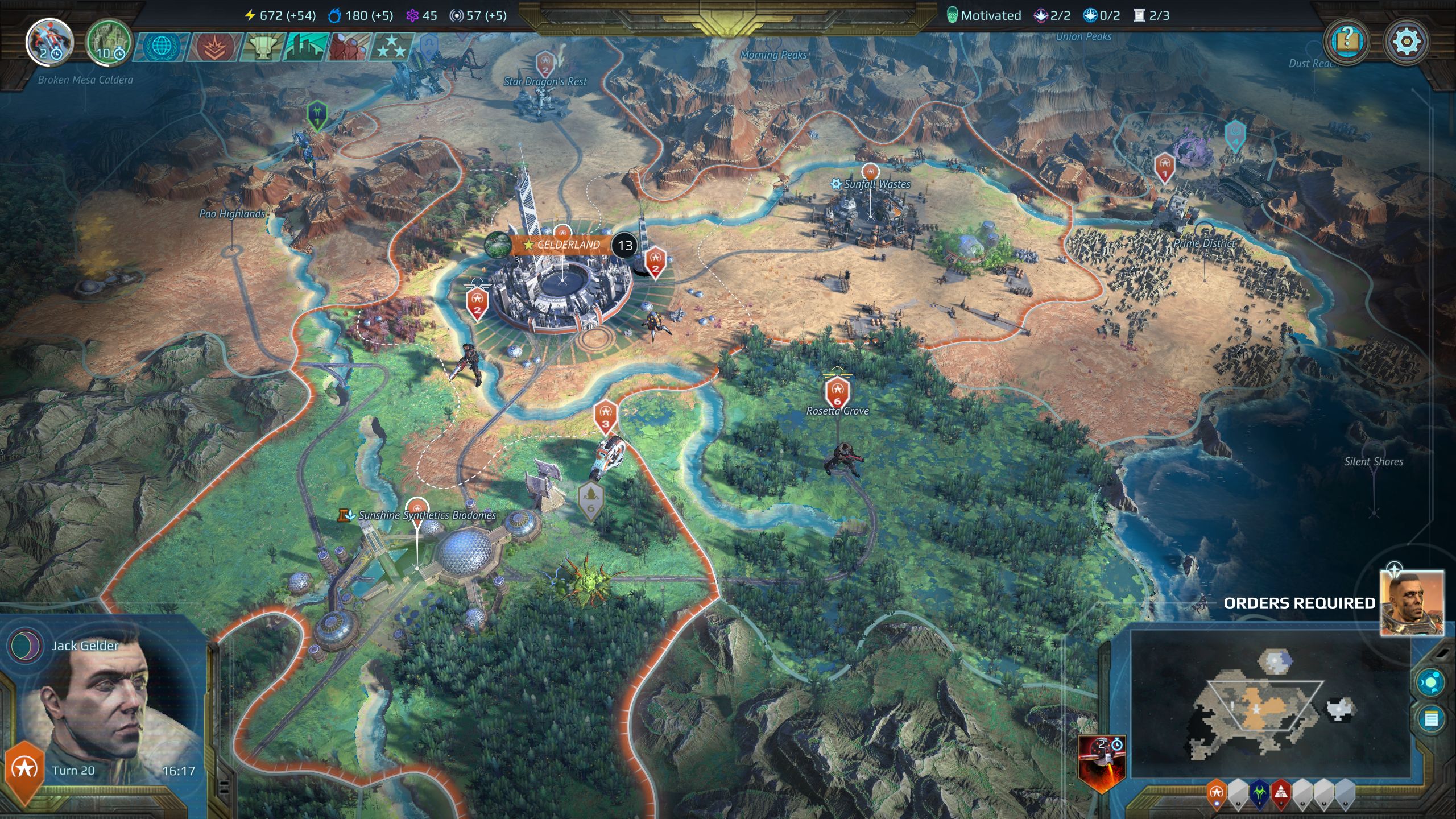 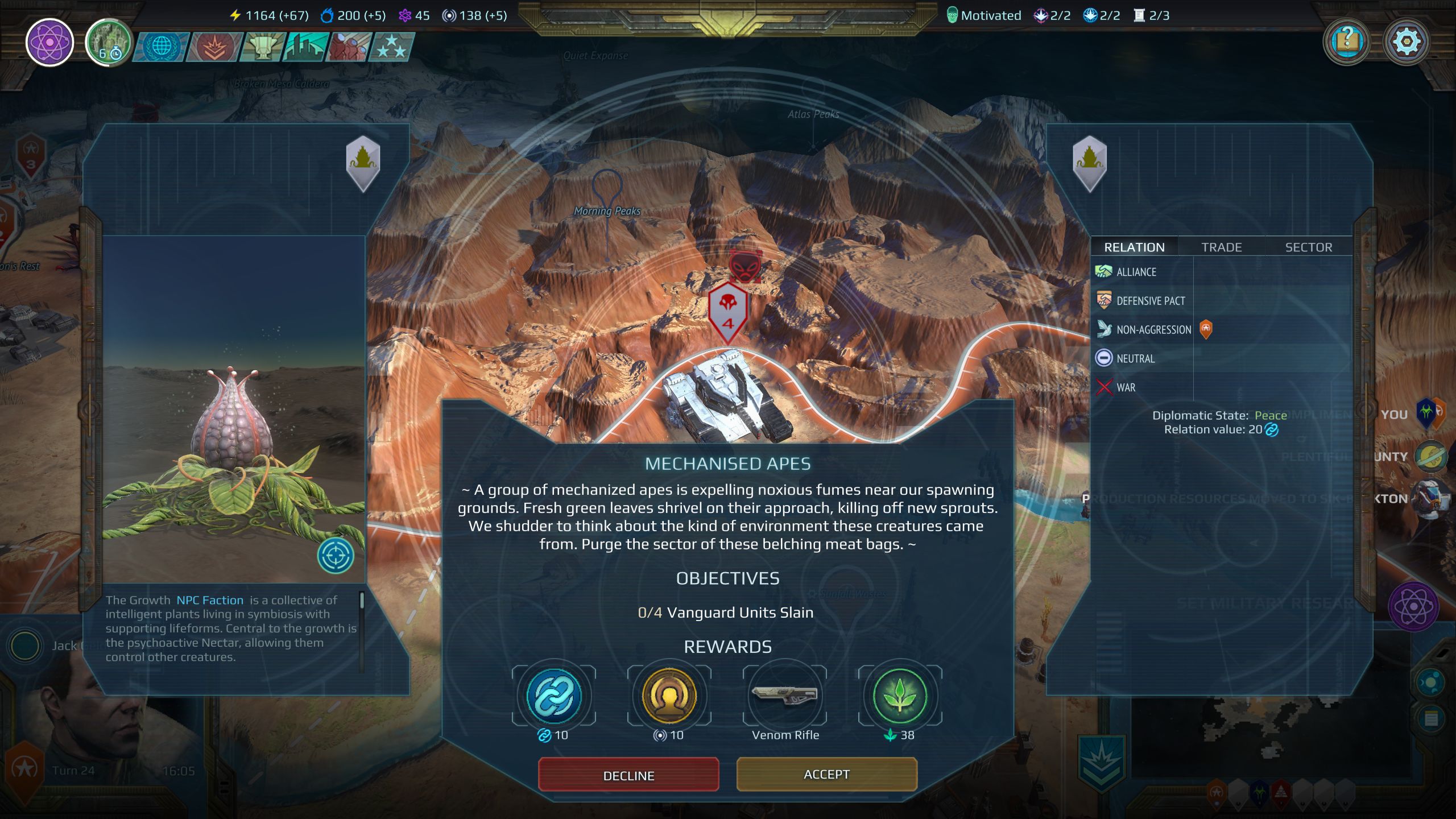 Quest for The Growth NPC Faction with influence among the rewards. ​
Note there are more variables but they are not global. Like colony food and production capacity.

Got Questions? Feel free to ask them. In future journals we’ll be going in-depth on the topics these resources govern.

Finally I’d like to use this space to give my thanks the community members sending the flowers and the well-wishes for the birth of my second child! Much appreciated. Everybody is doing well. Now I’m back to the relative quiet of the office
Expand signature
Lennart Sas
Director Planetfall, Managing Director, Co-founder @ Triumph Studios
Planetfall Development Diary List
Follow me @ Twitter
B

"Mechanised Apes" I don't want to know what they throw at their enemies..

Btw. does it mean there will be also "Mechanised Penguins"?

Boy, am I glad mechanised apes made it into the game!


LennartGS said:
You might notice there are two Research like slots in the top bar of the latest screenshot, more on this later!
Click to expand...

I wonder if that "SET MILITARY RESEARCH" in one of the screenshots has anything to do with that. Gee, now what could the other research type be?
Last edited: Aug 2, 2018

Gloweye said:
Even if endless champion is not a thing, will the EXp counter continue ? I once had a 300 exp shade in SM, still nice to see how useful a unit has been.
Click to expand...

woohoo we got a shout out peeps!

Bottom right square, what does that icon represent, on the left border of the square. I'm guessing it shows active operation?

Top left, underneath the resources bar, there appear to be 6 slots. I am guessing these are research options? 6 different research trees? :O

And 2 active research pools at the same time? I'm guessing that's what the 2 cicular icons to the left are.

LennartGS said:
Cosmite. This rare material has an origin beyond the void and is required for advanced units and unit modules. Cosmite is mainly gained from map nodes (Craters!). The rarity of this material means that high tier units can’t be mass produced and Sectors containing Cosmite are highly contested
Click to expand...


LennartGS said:
Influence. Influence is the diplomatic currency used to manipulate other players and NPC factions, it can be used for things like asking NPCs to surrender locations, hire NPCs mercenaries, and to make diplomatic pronouncements. Influence is gained by performing Quests and from an inherent generation of your empire. Cooperative Doctrines and friendly play styles give bonusses on Influence generation.
Click to expand...

Hire NPC mercenaries? So not from an inn like structure using gold?
Diplomatic pronouncements?
Doctrines? Co-operative or otherwise.

LennartGS said:
Doctrine Slots. Determines the amount of global doctrines (e.g. empire wide bonuses) you can have active at once.
Click to expand...

OK this I need to know more about. This is something very new. Is this like the Endless Legend system?

What is this structure? Image from Tibbles.

and this, also from Tibbles.


LennartGS said:
Energy is the main universal currency in the game. It is used for the production and upkeep of units, colony structures, unit modules and operations
Click to expand...

This sentence could be read to mean that colony structures, unit modules and operations are paid for with energy AND have a maintenance cost.

edit: answered my own question:


LennartGS said:
Tactical Operation Points. After feedback on AoW3 we’ve decided to split “Casting Points” for Planetfall in two. Tactical Operations Points are used to launch the Operations (Air strikes, Psi Storms, etc) you can call in during tactical combat, when a battle takes place within your Operational Coverage. The Tac Ops value resets every turn.
Click to expand...

So, "spells," limited to "domain" only. I assume/hope operational coverage = domain but more nuanced, as in not just around your cities?

So both types of "spells" are paid for by energy? Summons confirmed! What's that in the rewards? Space weed?

The Mechanised (did you mean Mechanized?) Apes quest says the objective is killing 4 Vanguard Units. Does this mean Seducing/Charming/Hacking them to your side will fail the quest? If they Seduce/Charm/Hack/Reproduce to increase their number, does killing those 4 (even if 'new' units remain ie party is not destroyed) complete the quest?

Also, the wording of the OBJECTIVES part does not specify which 4 Vanguard Units have to be Slain. It may be slightly apparent in the text, but sometimes it is preferred to get that information at a glance, rather than read every single quest that comes by.

If it is the party of 4 shown in the screencap, the apes look a lot like tanks. Monkeys driving tanks. I love the silliness, but I am concerned about the specific connection to them being "apes" as opposed to oppossums/hedgehogs or whatever that is hidden inside an enclosure and not visually apparent. (ninja'd by Lennart, do not reply)

LennartGS said:
Mechanized Apes is the way the Sentient Vegetables of the Growth describe humans in tanks
Click to expand...

Happy to hear everything is well with the family @LennartGS and many thanks to @BloodyBattleBrain for organizing the flower gift. Great devs and great community, what more can I ask for?

Question though - did you forget to say what the next dev journal is going to be or will the next journal be about the resources in detail? Looking forward to learning more about this - what the influence can be used for exactly and how the limiting resource will work out in the game. All seems super promising so far.

I also just want to say that I really like the decision to split casting point into Tactical and Strategic ops. And adding doctrines I think add's some good strategic depth as long as there are a good few meaningful choices that you have to pick between. I hope you don't end up being able to have all doctrines equipped eventually. I do enjoy having to make meaningful choices. Thanks for the update Lennart and welcome back.

LennartGS said:
Mechanized Apes is the way the Sentient Vegetables of the Growth describe humans in tanks
Click to expand...

Just a small thing, but it would be cool if the NPCs recognised they were talking to other mechnised apes then (in this instance, they are asking a Vanguard player to kill Vanguard units).

AwesomeLion said:
I really like the decision to split casting point into Tactical and Strategic ops.
Click to expand...

It could be amazing.

Am I right in assuming that Cosmite isn't just a t4 limiter but also a t3 limiter maybe? Will it be used for other things like buildings or super powerful "spells"?

In any case lots of nice changes iterating on past experience.

Though I must say Gelderland is a silly name. Should be Gelderburg obviously. ;-)

Edit: Is that a Dvar tank in the Prime District?

Jean-Luc said:
Edit: Is that a Dvar tank in the Prime District?
Click to expand...

Rhaeg said:
I think it's either that or it's something that came over for a visit from Hearts of Iron
Click to expand...

Oh goodie, so much new info but yet so many things we still don’t know. These dev diaries are doing a great job of making Thursday my favourite day of the week.

Love the things I’m seeing so far. True to the strenghts if AoW3 but with a lot of new stuff and ideas to improve on the experience in a whole new scifi setting to top it off.

Now if only 2019 would be around the corner already...

To answer some questions:

Yes, Tier III units also require Cosmite, significantly less than Tier IVs though. Pending balance we may apply it to other things like ops or special structures.

We have significantly less doctrine slots than doctrines to pick from, especially later in game.

Still questions about the Gelderland:
What is the 13? Turns to finish building something? Turns to grow?
What is the 3 and 1 below the name tag (credit to sharp-eye Tibbles for noticing that)? Town defenses? Number of buildings? Construction resource count?
Is the left circle a visual representation about what is being constructed?
Does the UI look weird if someone calls their town Gelderseldermelderelderland (ie long name)? Does it start looking weird with a star in front of it (moving capital, I assume)? Is there a strict limit to town name length that limits creativity?

Really digging the road art - the triangle created in the first screenshot ties perfectly with surrounding roads (though not well with the river).

Is it possible to include resource depletion as a game option ?
A major problem in any strategy game is snowballing where the winning side keeps winning more. Once one side gets the upper hand it can simply steamroll everyone else with its economy.
Could we get a option in advanced game rules where a sector produces less minerals over time ? This way even powerful empires will have to worry about conserving units, repeatably throwing armies in futile attacks will deplete the most wealthy empires if there is a finite amount of resource on the planet. Defensive victories will matter again.
And it makes sense from a realism standpoint too, what kind of valuable minerals comes in unlimited supply ?

Looking A much improved strategic gameplay and was a weak point in AOW3.Hyped.

Nerdfish said:
Is it possible to include resource depletion as a game option ?
A major problem in any strategy game is snowballing where the winning side keeps winning more. Once one side gets the upper hand it can simply steamroll everyone else with its economy.
Could we get a option in advanced game rules where a sector produces less minerals over time ? This way even powerful empires will have to worry about conserving units, repeatably throwing armies in futile attacks will deplete the most wealthy empires if there is a finite amount of resource on the planet. Defensive victories will matter again.
And it makes sense from a realism standpoint too, what kind of valuable minerals comes in unlimited supply ?
Click to expand...

What I personally do not like about this is that it is extra punishing for those (like myself) who prefer a turtling strategy. In AOW you're already at a big disadvantage when you turtle: in multi-player you're pretty much guaranteed to lose if you like to take things even moderately slow.

I would like to phrase this common problem with strategy games that you mention a bit differently and a bit broader: end game tends to become a boring chore without any real challenge in strategy games that have some sort of global map that needs to be conquered. How could endgame in those kind of games be made more interesting? I thought AOW3's seal victory was a nice answer to this problem, even though it once again disfavoured the turtlers among us (you have to be ready to rush for those seals sooner rather than later).

I do think the answer to the "boring endgame" problem should be sought in victory conditions rather than changes to the game's economy. Or maybe I should say that experimenting with victory conditions is a lot easier than messing around with the economy...

Btw, I've pretty much accepted by now that the AOW games do not favour slow peeps like me. It makes MP games especially unattractive for me, but turtling can still be fun against the AI, and can even make campaign levels extra challenging in a good way
Show hidden low quality content
You must log in or register to reply here.
Share:
Facebook Twitter Reddit Pinterest Tumblr WhatsApp Email Link
Top Bottom