Jump to latest Follow Reply
Menu
Install the app
You are using an out of date browser. It may not display this or other websites correctly.
You should upgrade or use an alternative browser.
Age of Wonders: Planetfall 1633 Bug reports 1631 Suggestions 536 User Mods 94 AoW: Planetfall: News and Updates Archive 41 Multiplayer 54
Show only dev responses

Hello everybody! For today’s dev diary we’ll be looking at the last of our NPC factions, the Growth! The Growth are a unique take on a NPC faction of Planetfall, as they are composed of sentient plant life living in symbiosis with select fauna.

History:
During the expansion of the Star Union, expeditionary forces stumbled across a planet unlike any they had discovered before. This faraway planet was completely covered in alien jungle, a jungle that appeared alive beyond the normal capabilities of plant life. This jungle formed a single entity, all plants interconnected into a massive collective sentience, reacting and even predicting the actions of the scientists that studied it.

Seeing the value of this hardy, rapidly expanding plant species, they started cultivating and genetically altering it to use in their terraforming efforts. They developed a new strain of this plant life, which has a long and complicated scientific name, but is simply referred to as the Growth. The Growth was unique in that, if it was allowed to grow big enough, its sentience became more sophisticated and it would be able to form symbiotic bonds with wildlife. This was dangerous to developing colonies, so efforts were made to always keep the Growth in check.

They deployed the Growth to their terraforming colonies, with varied success. The Growth allowed for rapid development of local flora and fauna, as long as it was kept under control. On some planets however, the Growth grew out of control and developed too much, taking over large parts of the planet and forming symbiotic bonds with the local wildlife through the use of pheromones and mind-altering pollen. Intelligent life was equally affected, there are stories of colonists disappearing into the wilds, lured by pheromones, never to return as they are absorbed into a symbiosis with this alien Growth.

After the Collapse, planets seeded with Growth were left to grow unchecked and the Growth thrived, rapidly evolving and growing into maturity. Over time, giant Mothernode clusters formed on these planets, which serve as central hubs for the Growth and are seen as the main source of the Growth’s sentience.


Concepts of the Growth, not all of these concepts made it into the final game!​
Design:
The Growth faction is divided in two sides, the flora and the fauna. The Growth has formed symbiotic bonds with local fauna, namely giant bees, to the benefit of both sides. The Growth is able to communicate through a telepathic bond formed by the expulsion of specific pollen, though their behavior and motives are obscure at best, and its intelligence can only be guessed at.

The Growth strives to achieve symbiosis with all life forms it comes across, its armies are often supplemented by various forms of wildlife that it has recruited to its cause. It lures them in with pheromones and releases mind-controlling spores to sway their allegiance. Even intelligent life is not safe to these persuasive methods, as many a stray colonist never returned to their colony, being absorbed into the Growth symbiosis.

Despite their unique form of communication and their tendency to benevolently absorb life into their symbiosis, diplomacy is possible with the Growth, though some of their requests can be rather interesting... 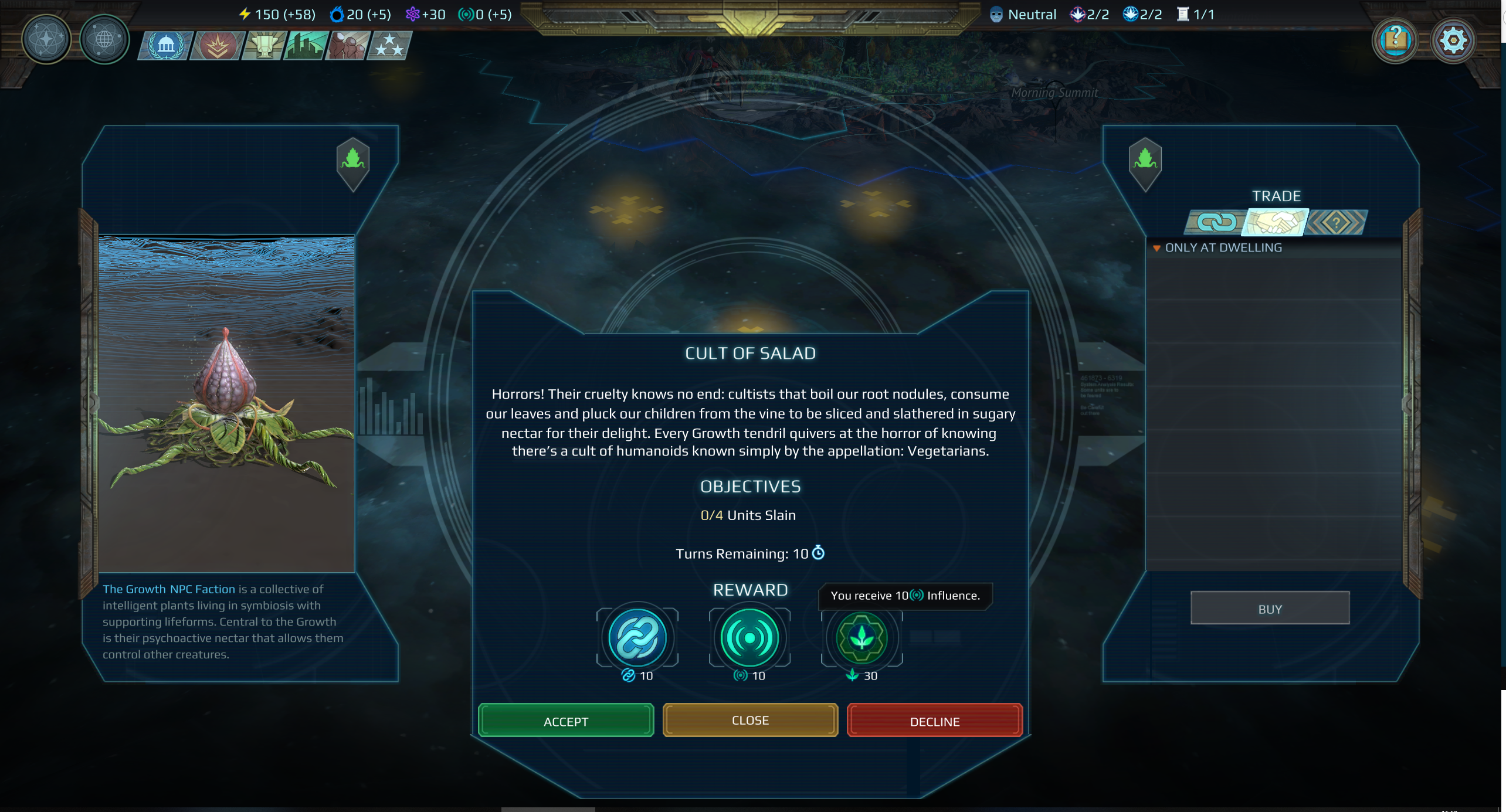 
Vegetarianism from the perspective of the plants is actually quite terrifying!​
Units:
The Growth has strong melee capabilities in both of its Bees as well as the Vine Bud unit. This, combined with their use of pollen to cause regeneration and healing in units, makes them quite strong up close. Their ranged units are not to be underestimated however, with both the Flowering Node and Seed Cluster being able to rain down heavy biochemical damage at long range. These ranged attacks can lower the Kinetic and Biochemical resistance of enemy units, making them even more vulnerable to melee attacks, resulting in great synergy within the lineup.

Worker Bee:
The worker bee is the most common animal that can be found with the Growth. These bees have a nasty sting they can use in defense, but their main utility comes from a special kind of pollen they carry with them, that has strong regenerative properties. 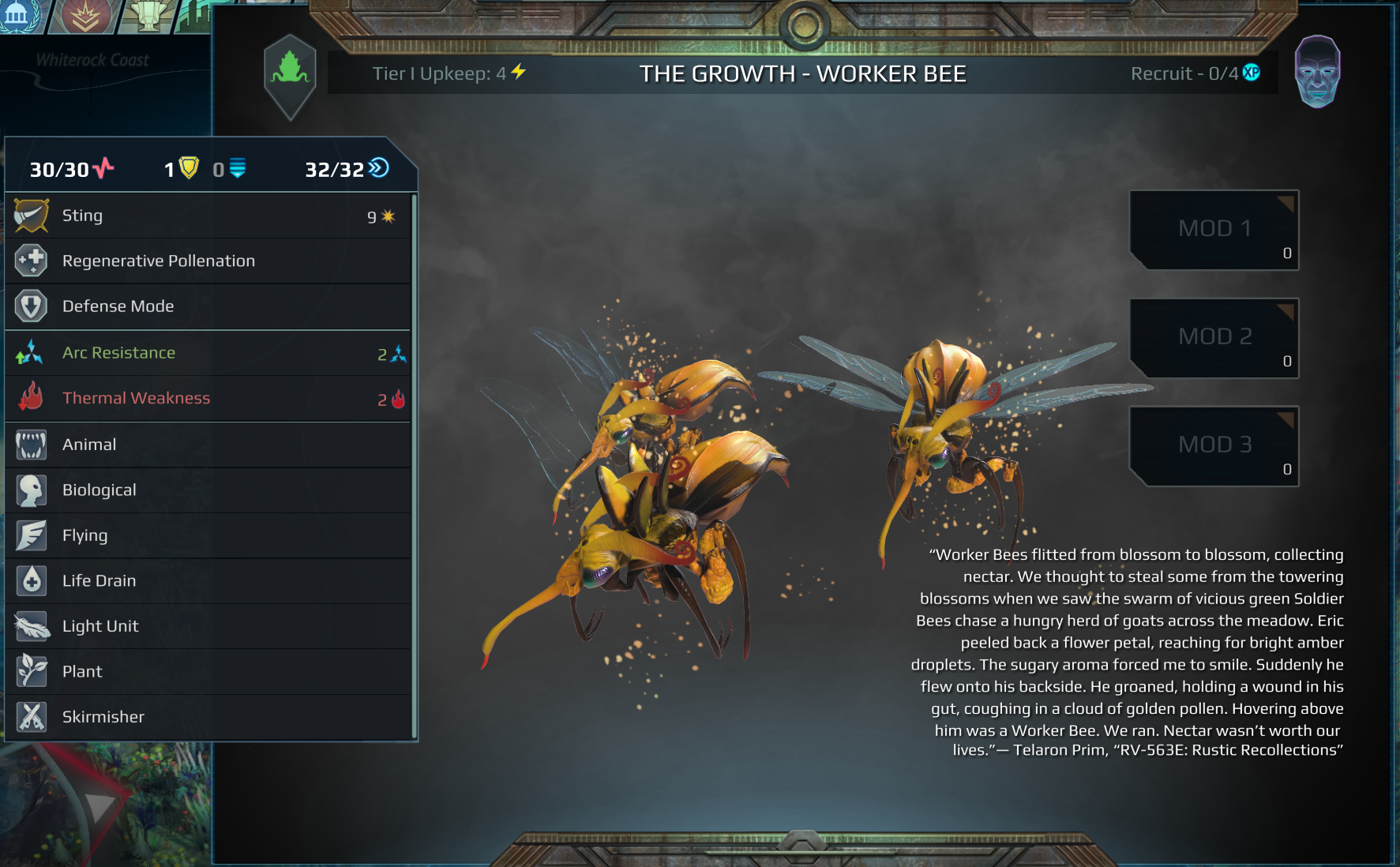 Soldier Bee:
The Soldier bee is the main animal defender of the growth. Swarms of these protect the growth from all hostile threats. Their corrosive spit can melt through armor at range, and they have the same nasty sting for when enemies dare to get too close. 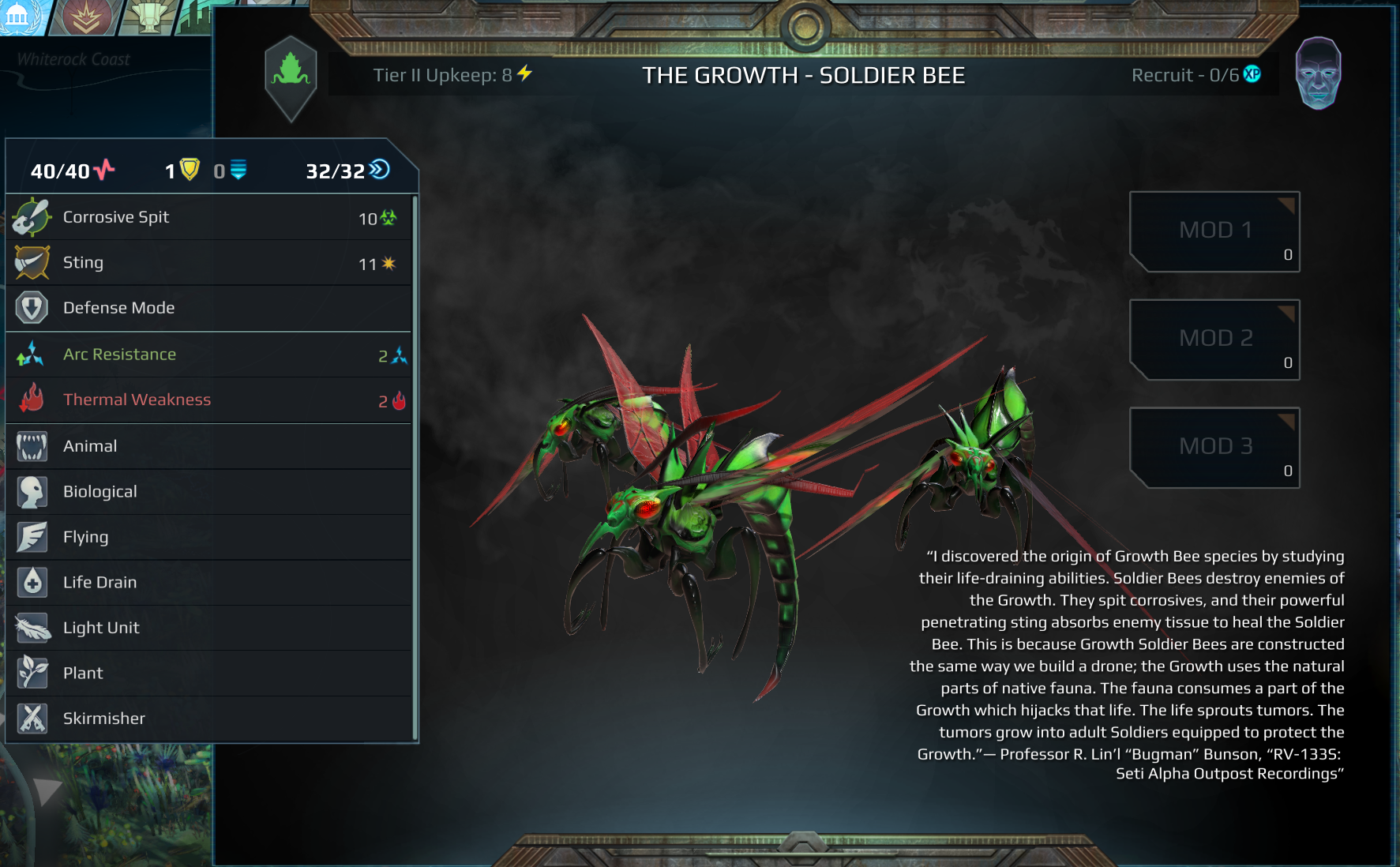 Vine Bud:
This unit is the smallest member of the plant family of the Growth. It's vines are deadly when it gets close to enemies, and it can summon small versions of itself, Vine Sprouts, in combat. These Sprouts are stationary but have strong melee attacks, perfect for area denial and setting up traps. 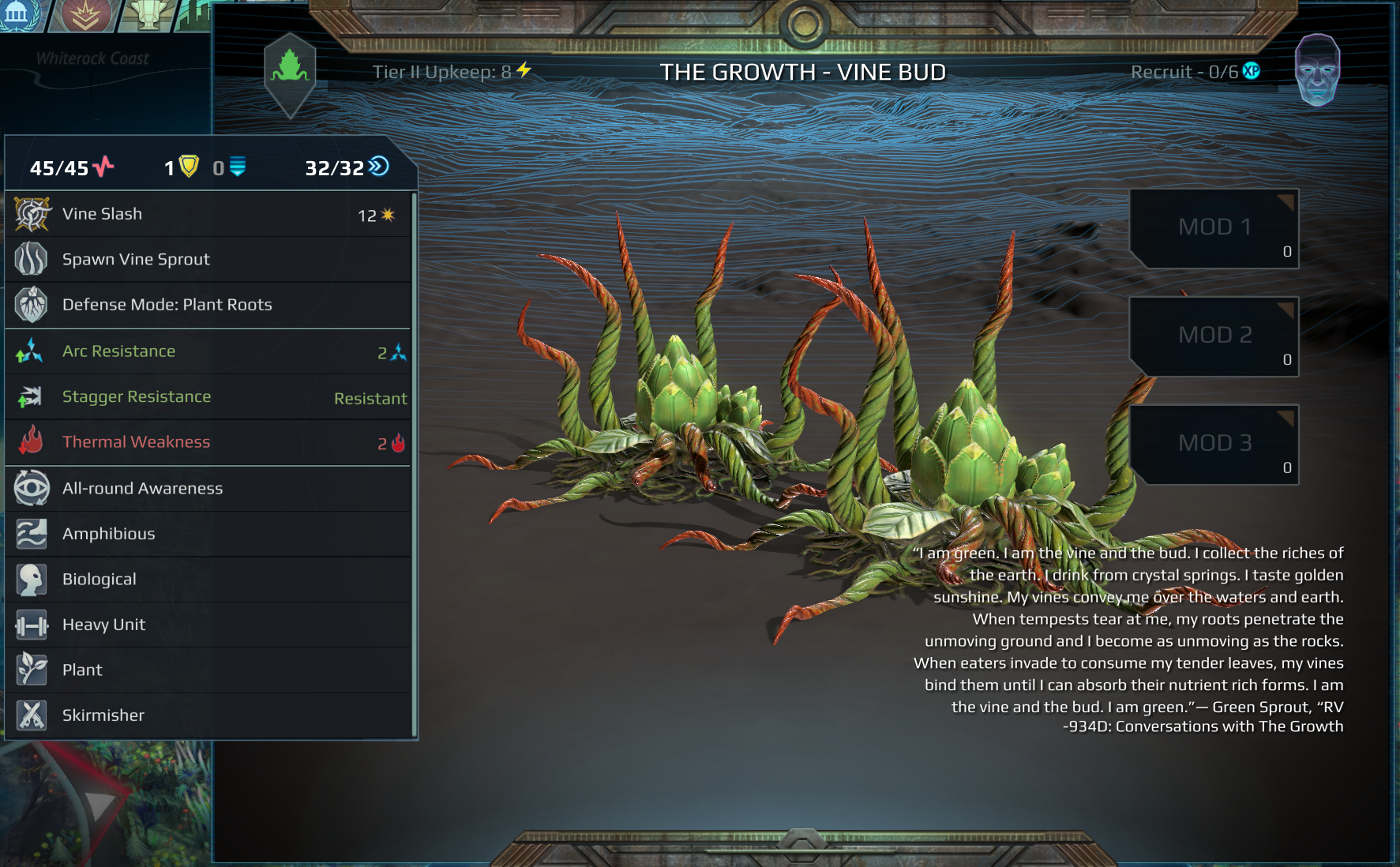 Flowering Node:
The Flowering Node is the first true ranged units in the Growth line-up. Using its Noxious Pollen ability, It can release deadly pollen in a area of effect at range, dealing biochemical damage and poisoning units. Additionally, this attack causes an Allergic Reaction in units, which lowers their Kinetic and Biochemical resistances, very powerful in this lineup! The Allergic Reaction is also caused by its main attack; Allergenic Spray, which is a single target attack where it sprays pollen directly at a target over long range.

This versatile unit has one more trick up its.... petals? as it can deploy a spray of Pheromones that can mind control non-Mechanical units, causing them to switch allegiance until end of combat. 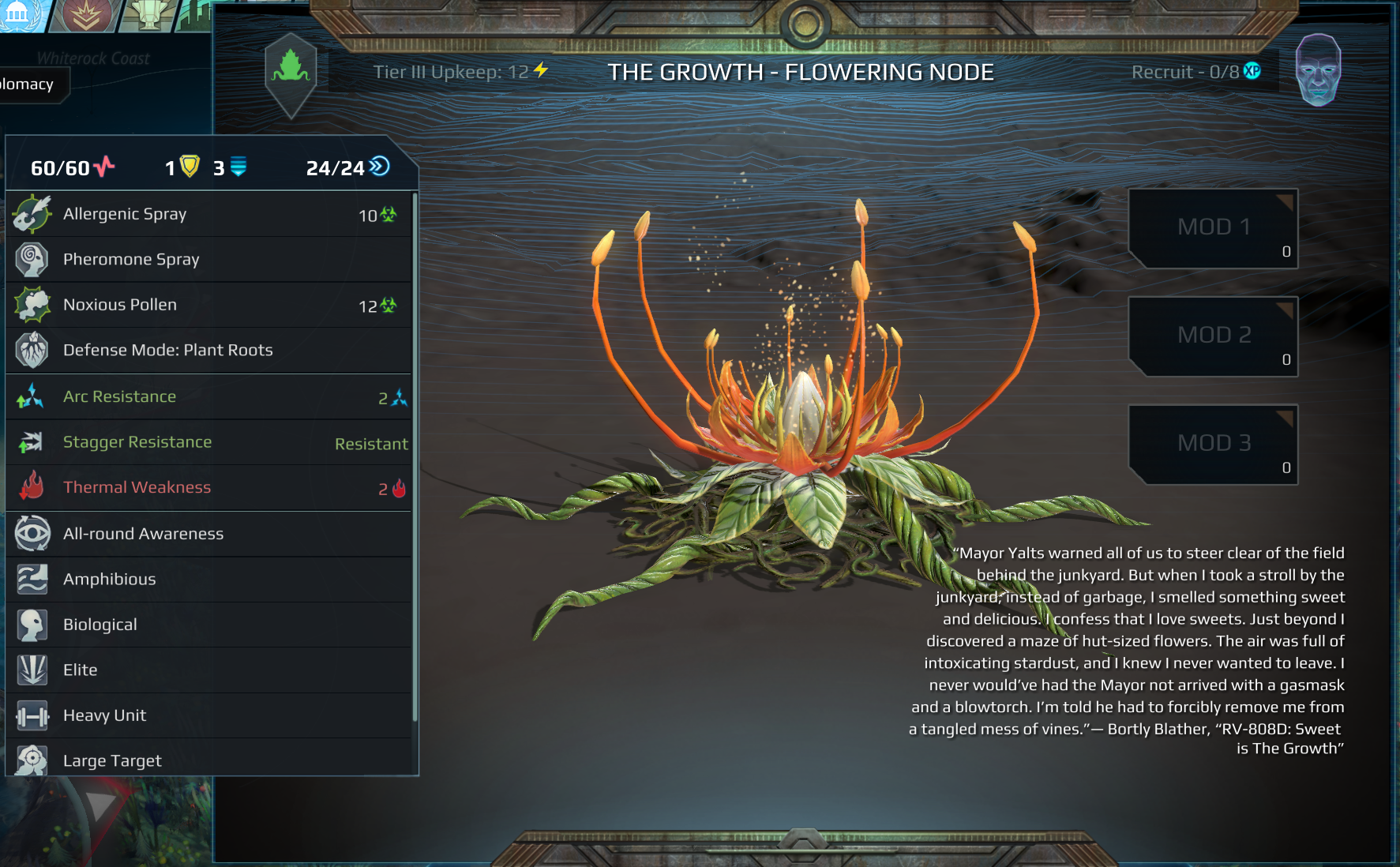 ​
Seed Cluster:
The Seed Cluster is a unique unit in Planetfall, as it is a tier IV repeating artillery unit, the only one of its kind. It has a Seed Bomb attack which targets a single unit at range, but the main threat from this unit is its Seed barrage ability. This ability is very inaccurate but hits an area of effect, which means this unit doesn't target a unit as much as a general area, and unleashes a deadly barrage, hitting pretty much anything nearby, staggering and slowing them. Both of these attacks also cause Allergic Reactions in units.

It can release a great deluge of pollen from itself, coating the entire battlefield in Pollen which cleanse friendly units from status effects and heals them each turn, for a few turns. This ability is very powerful in keeping a Growth army alive. 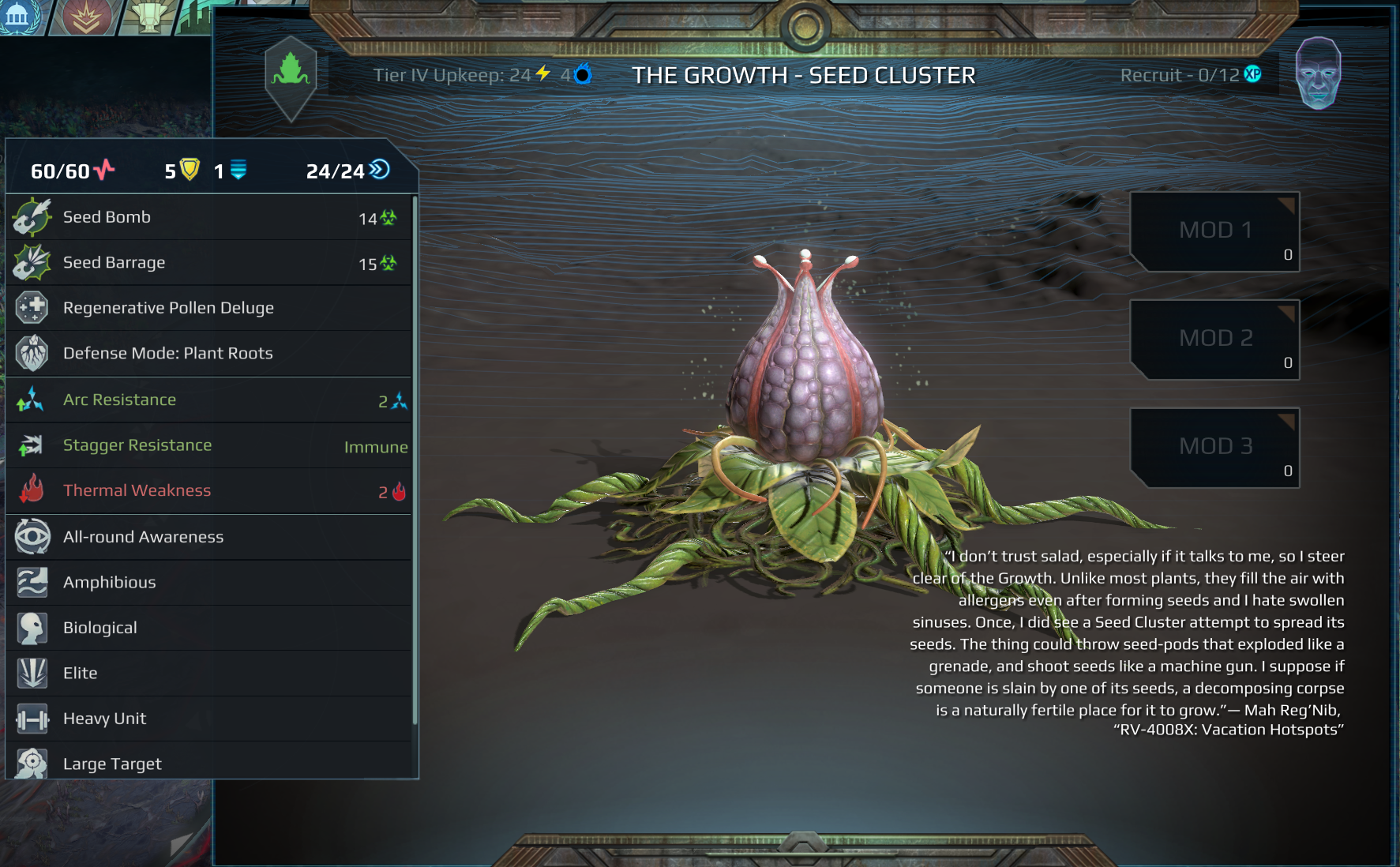 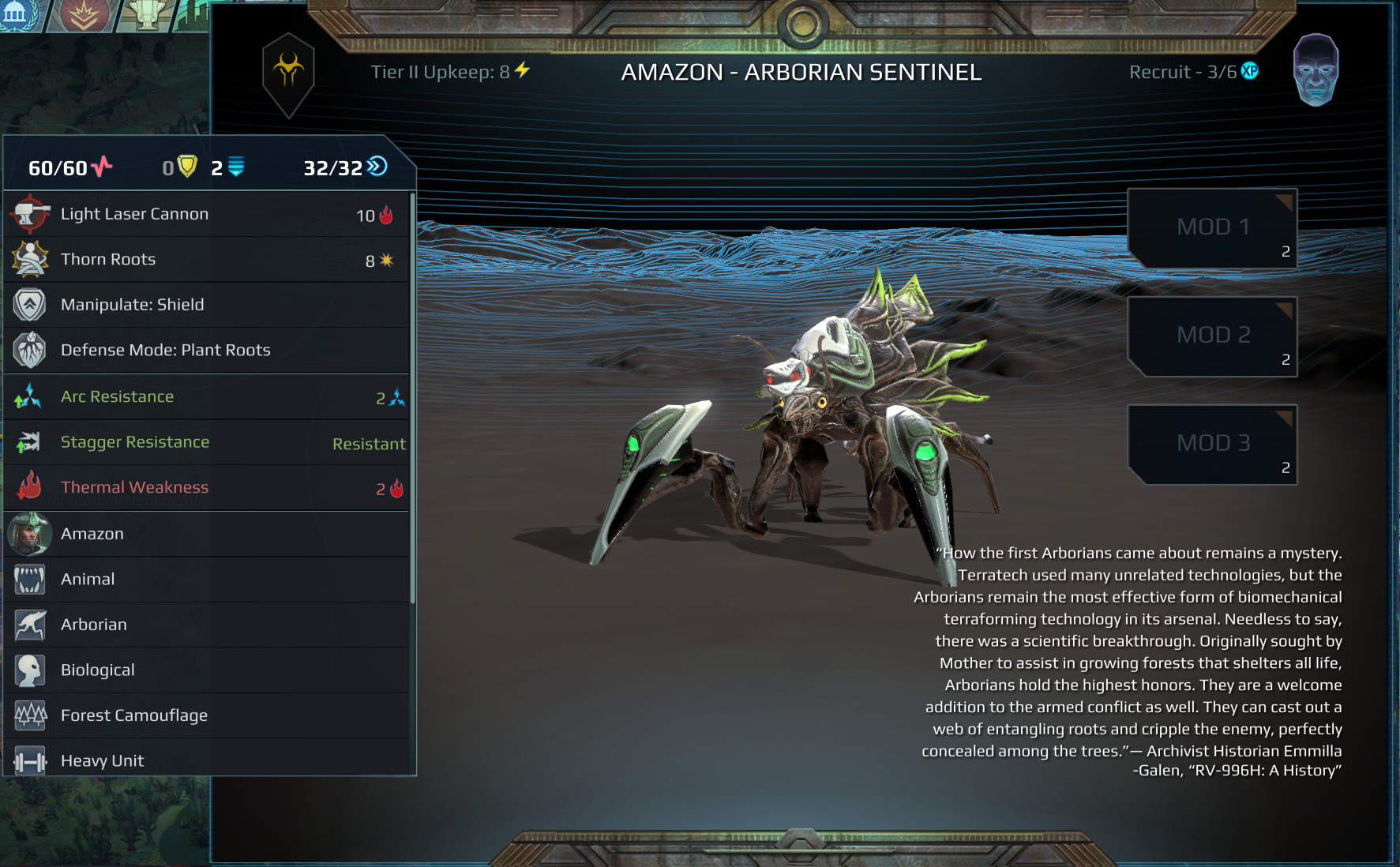 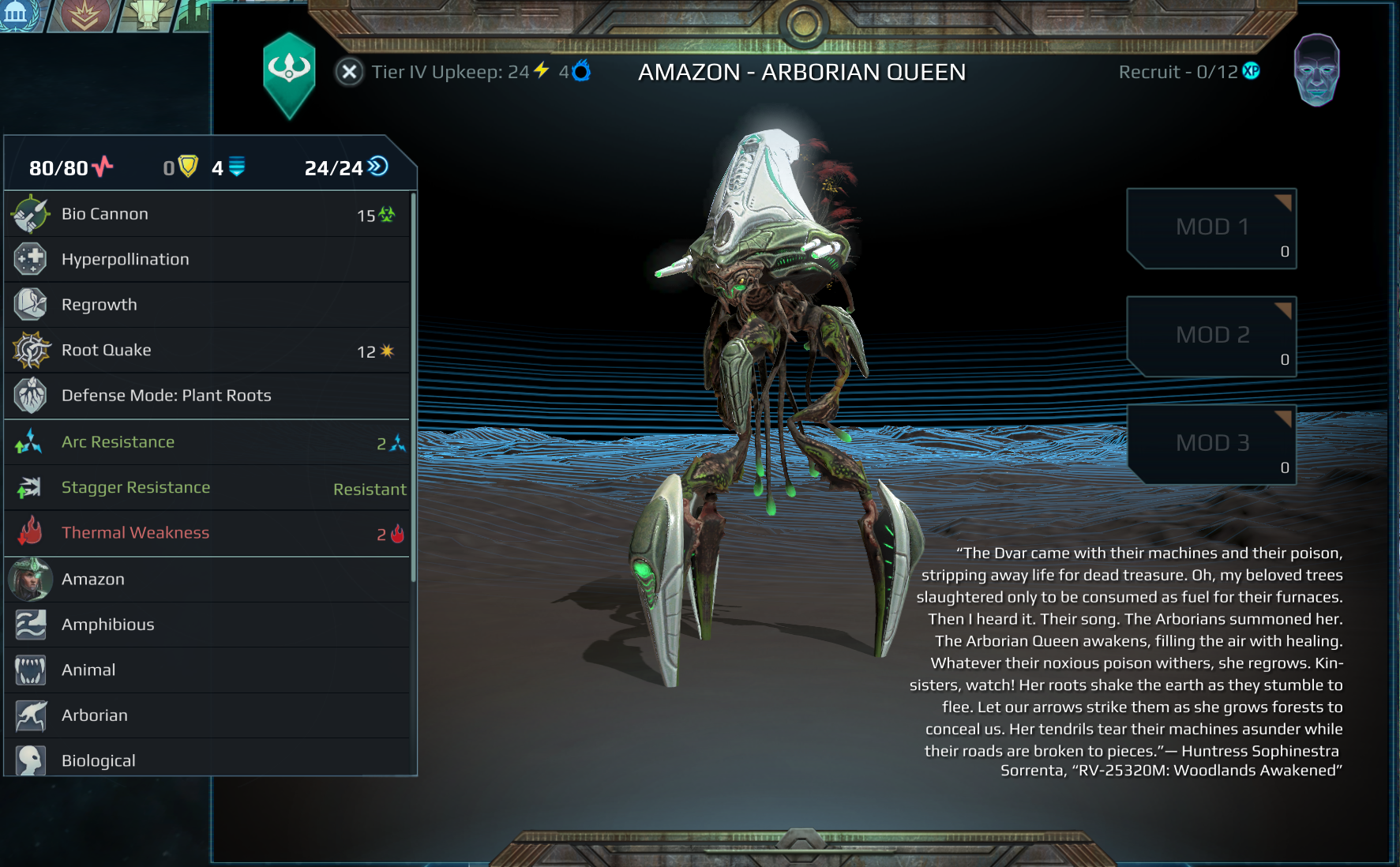 The synergy between the Growth and the Amazon is quite strong due to their mod compatibility, as the Amazon is the only player faction that has access to Plant units in their main line-up! 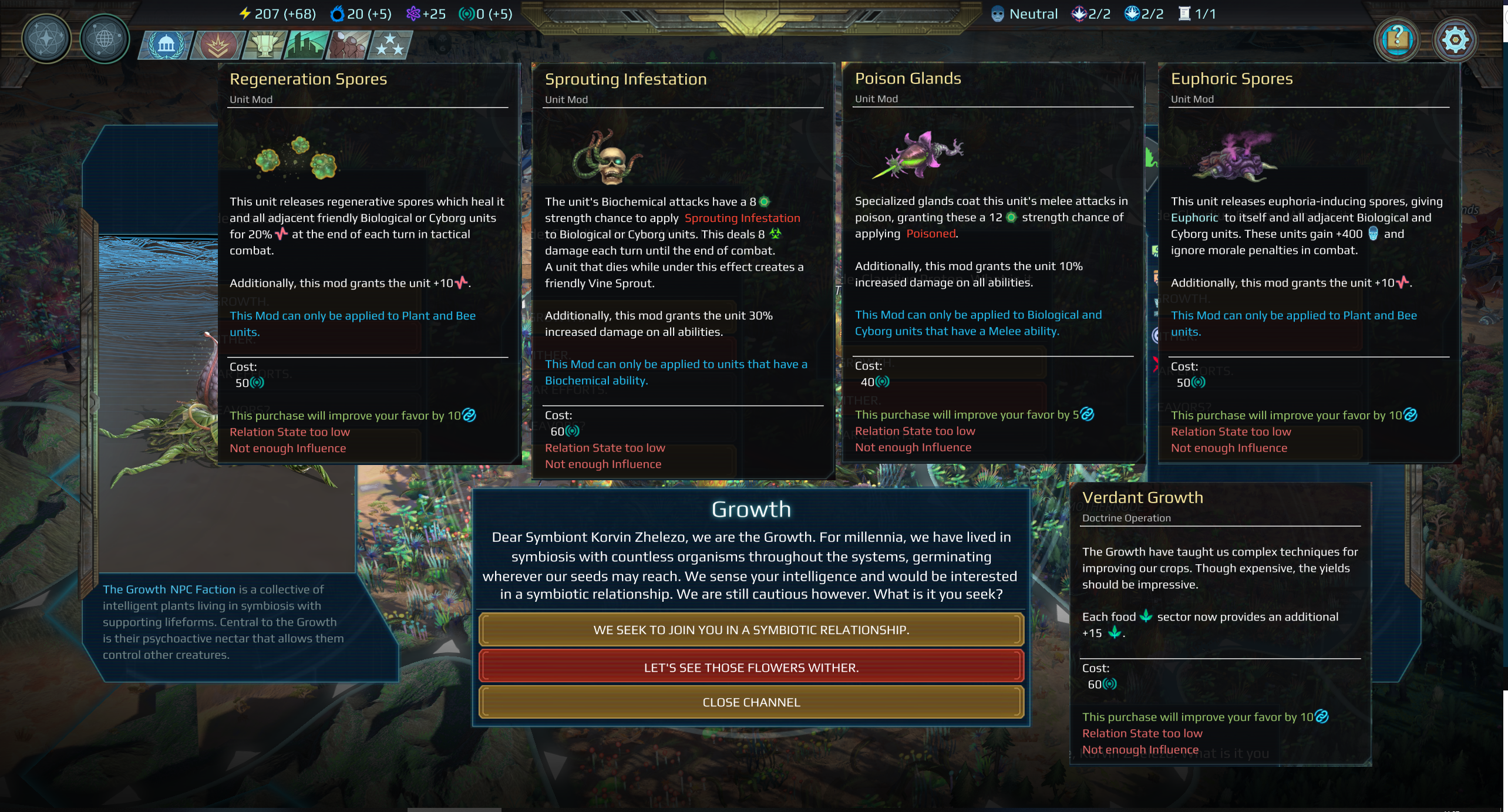 Some of the goodies that can be unlocked by making nice with this sentient plant species.​
Growth Dwelling:
The Growth Dwelling is a large, overgrown area of jungle that ferociously spreads, despite hostile terrain, hazards or hostile lifeforms. The dwelling is formed around the Mothernode in the center, which is the main nervous system of Growth sentience.Thick vines spread out from this center, spreading jungle like flora and clusters throughout the sector. 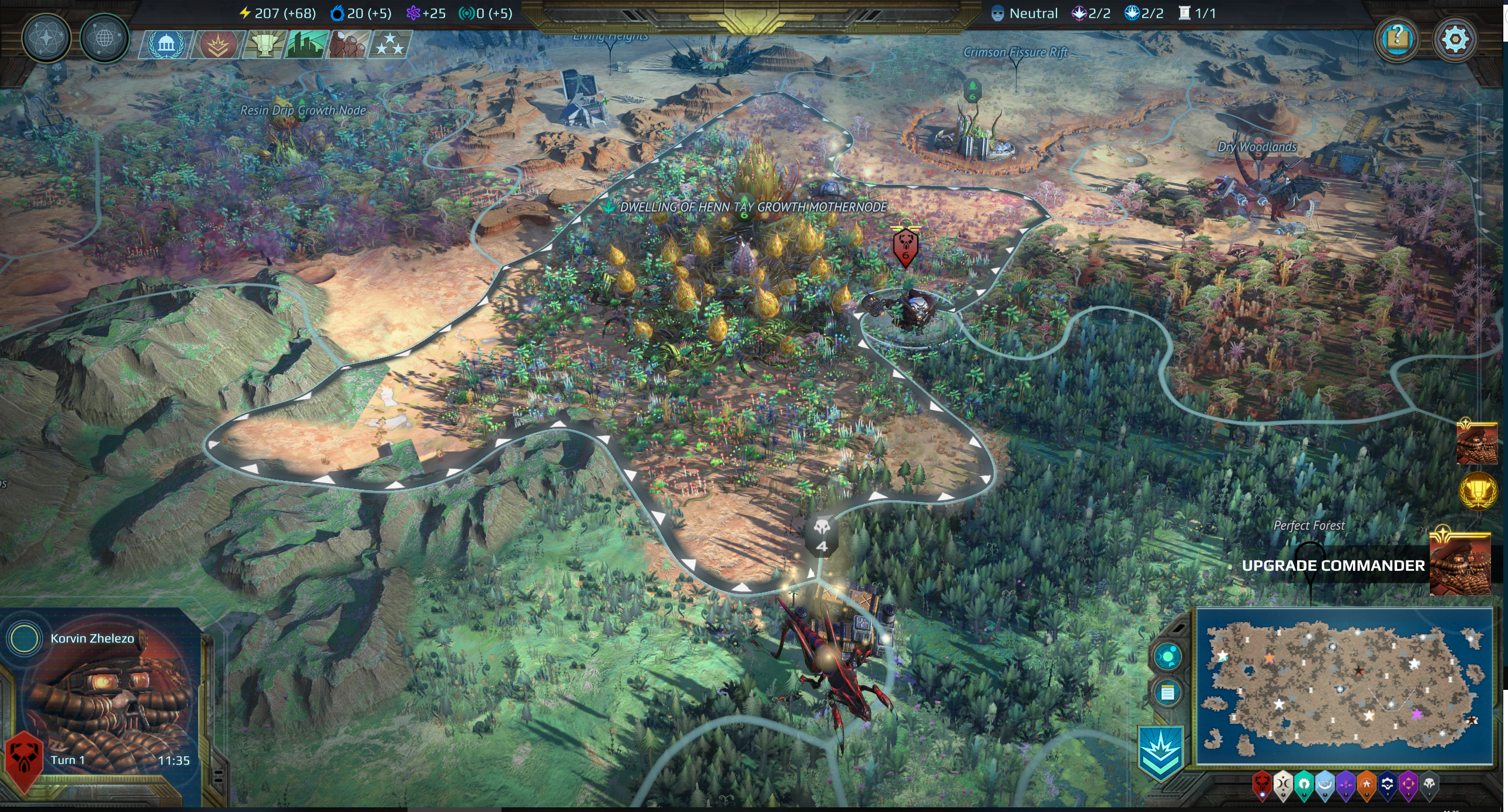 The Growth thrives, spreading their roots wide, even in the Arid unforgiving terrain​

Some foolish Dvar invading a Growth dwelling, they're in for a tough fight!
The Mothernode looms over the battlefield in the distance.
​
And there you have it! The final NPC faction fo Planetfall revealed in depth. I hope everyone is excited to meet these guys, whether you chose to cooperate with them, to the downfall of vegetarians, or purge them from your world like the Star Union of old!

My favorite NPC faction! I love all things plaaaaaaaaaants and treeeeeeeeeeeeees! lol

Lot of jungle to burn it seems
Toggle signature
Please support my suggestion to add Mozarabs as a playable culture in CKIII and to bring back Albanian, Coptic and Dalmatian cultures in CKIII

can player faction form permanent symbiosis with the growth?
C

DEATH TO THE VEGETARIANS!

It's a bit disappointing to see that most of NPC factions outshines almost all playable factions in terms of interesting units, background and abilities...

HAHAHA! I have tears in my eyes. We get quests to kill vegetarians! As a pro-carnivore I approve.
Toggle signature
"Maps are cool, everybody loves maps!" - Johan

Are we able to recruit the salad units for the battlefield? I ask because if their units are not very mobile on the battlefield how are we gonna move them to other parts of the map? Other than that excellent Dev diary, this faction looks great. Hope you have something prepared for the next week, the final before the release
Toggle signature
Still waiting for Runemaster

the glory of plain said:
can player faction form permanent symbiosis with the growth?
Click to expand...

Once your reputation with them is high enough you can integrate them into your faction I believe, but that goes for all the NPC factions.
So in a way, yes you can.


Ridixo said:
Are we able to recruit the salad units for the battlefield? I ask because if their units are not very mobile on the battlefield how are we gonna move them to other parts of the map? Other than that excellent Dev diary, this faction looks great. Hope you have something prepared for the next week, the final before the release
Click to expand...

The Leafy greens are mobile (perhaps not super fast, but definitely not immobile).
There have been a few instances of battles with or against the Growth that show this off on Youtube.

Interesting; looks like it'll be of more interest to Kir'ko and (as mentioned) Amazons than anyone else, though I'm sure anyone can find a use for heal-bees and plant artillery.
Also, I love the pun you guys slipped in there.
Toggle signature
"A wise enemy is better than a foolish friend." -Arab proverb

I'm kind of surprised there's no Little Shop of Horrors kind of man-eating plant that just gobbles up people whole.That would have been hilarious. But I'll take what you've created, definitely.

Plants, prepared right, are the food most beneficial to our bodies, and absolutely cannot be allowed to resist.
Toggle signature
Just "Fogcrow" on the Age of Wonders III forums
F

The Bulbasaur line is my favourite in Pokemon, glad to see you brought them to your awesome game too!

There are many interesting synergies in this game. Amazon especially with these and the biohazard secret tech. But I think I might want to compensate some to be able to attack mechanised units more effectively too.

Thinking about it I think the growth would basically hate all the races including the Amazons.I would make them just a menace that would expand the whole game unless stopped.Like a fanatic purifier in Stellaris.

Neb_ said:
there are stories of colonists disappearing into the wilds, lured by pheromones, never to return as they are absorbed into a symbiosis with this alien Growth.
Click to expand...

I hope these humans in symbiosis with growth make an appearance at some point as unique units. The growth already have a complete line up and they probably aren't different enough to be a new minor or major faction, but maybe as marauders?