Just 4 weeks until release! Still, we keep the Planetfall dev journals coming. In today’s diary we take a deep look at the Spacers NPC Faction.

Spacers are gangs of raiders, who roam the ruined worlds of the Star Union looking for anything of value. They originate from the Star Union’s mega city masses that were kept in check with limitless virtual entertainment and nutrients laced with pacifying chemicals. After the Collapse brought the population violently back to reality, they were left to survive in a devastated and lawless universe.

The strongest, craziest and most ruthless survivors formed tribal gangs. They fill their days with raiding, debauchery and perverse rituals as a replacement for numbing bliss the Union once provided.

Not all humanity has left the Spacers though. They can be negotiated with; their NPC quest lines allow them to restore somewhat of a civil society and join your colonies. 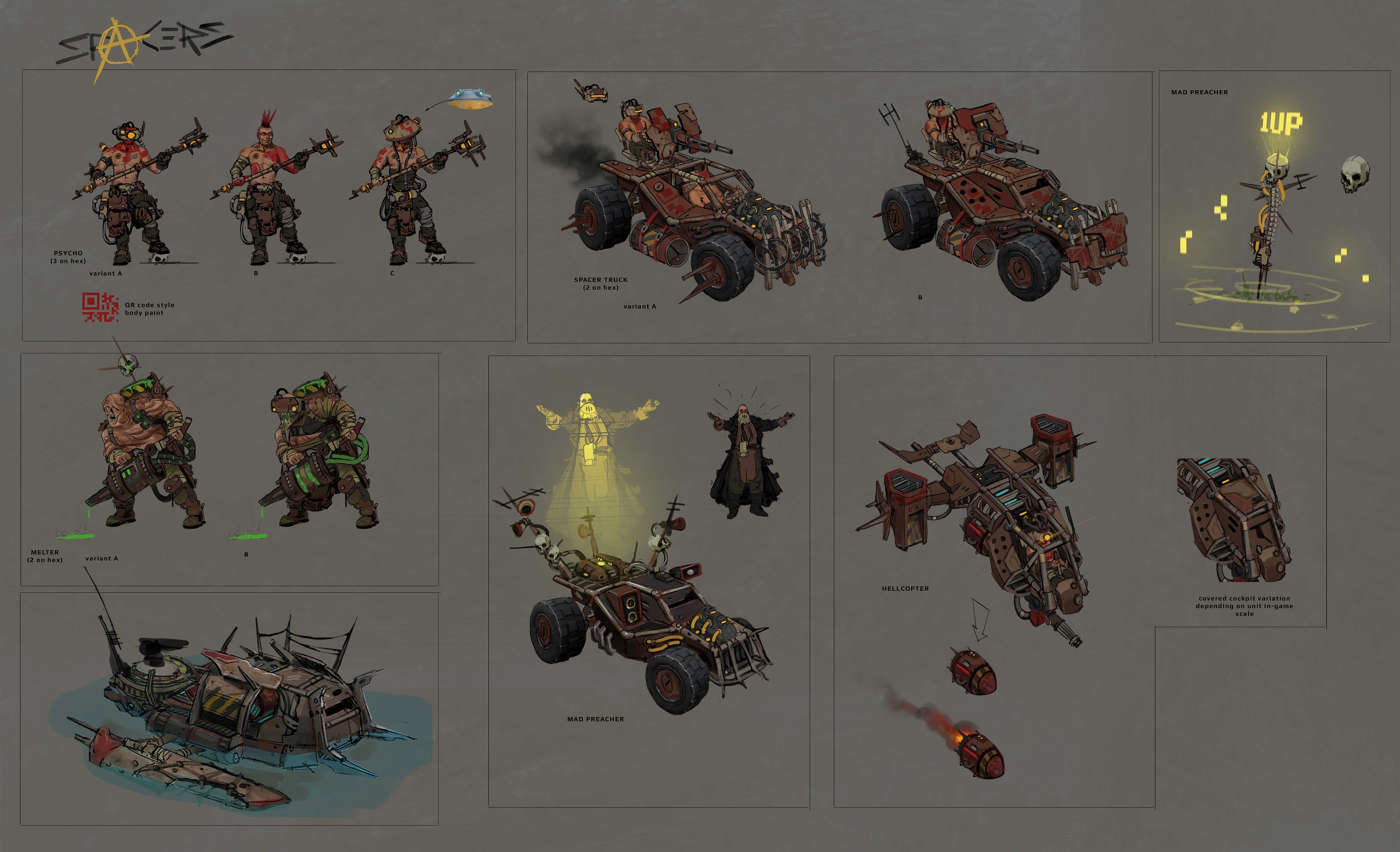 The design of the Spacers combines elements of post-apocalyptic raiders and some form of a twisted VR gamer culture. Although the ultra violent (and likely other obscenities) VR world their ancestors inhabited has been offline for generations, elements are still embedded in their language, culture and religion. 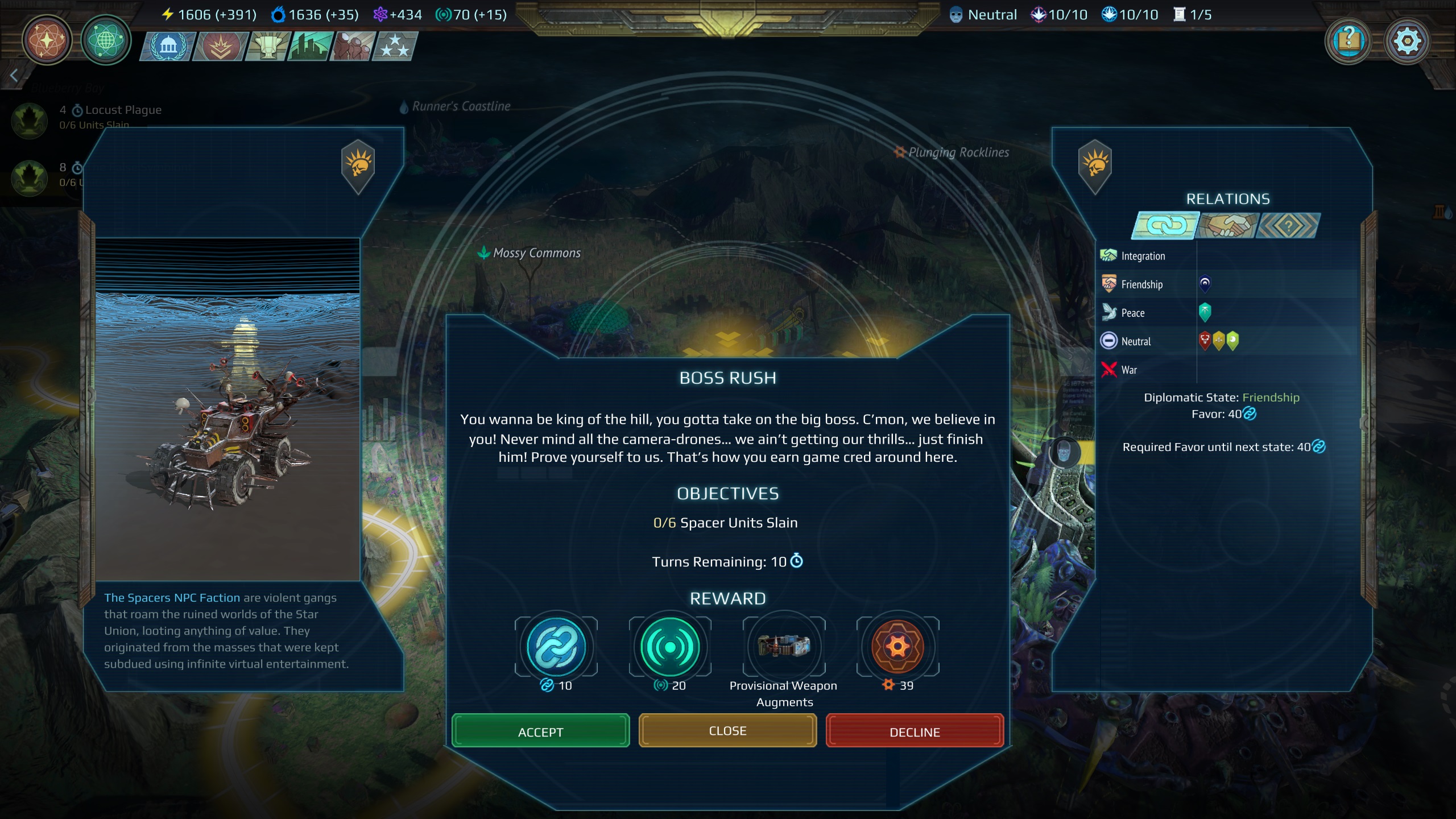 Spacer units are highly reckless and aggressive and reply on buffing and explosive AoE damage. Spacer units carry effigies. When a unit dies, they drop this totem-like object, marking the place of the unit’s death.

Other Spacers get rallied by Effigies, as these static “unit” automatically buffs one of friendly units every turn, granting a +25% boost on damage for that turn. The effect of the effigy can be boosted further as you’ll read below. 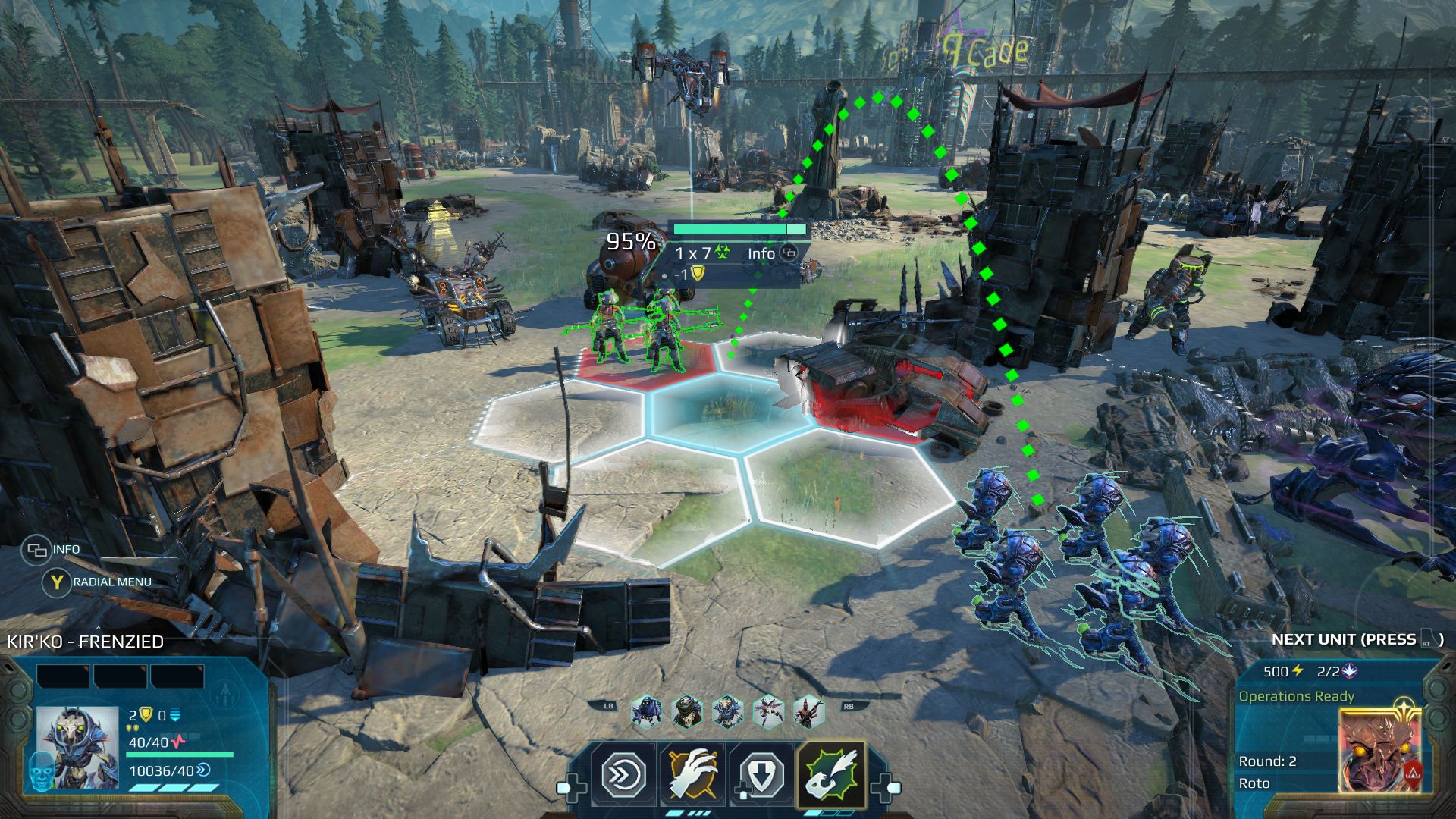 The fearless Frontline maniacs of the Spacers. They rush the battle field with an improvised mace in hand. Its Berserk Chemicals give Fast Movement and Damage out put of +25%. (which can be further buffed by effigies) 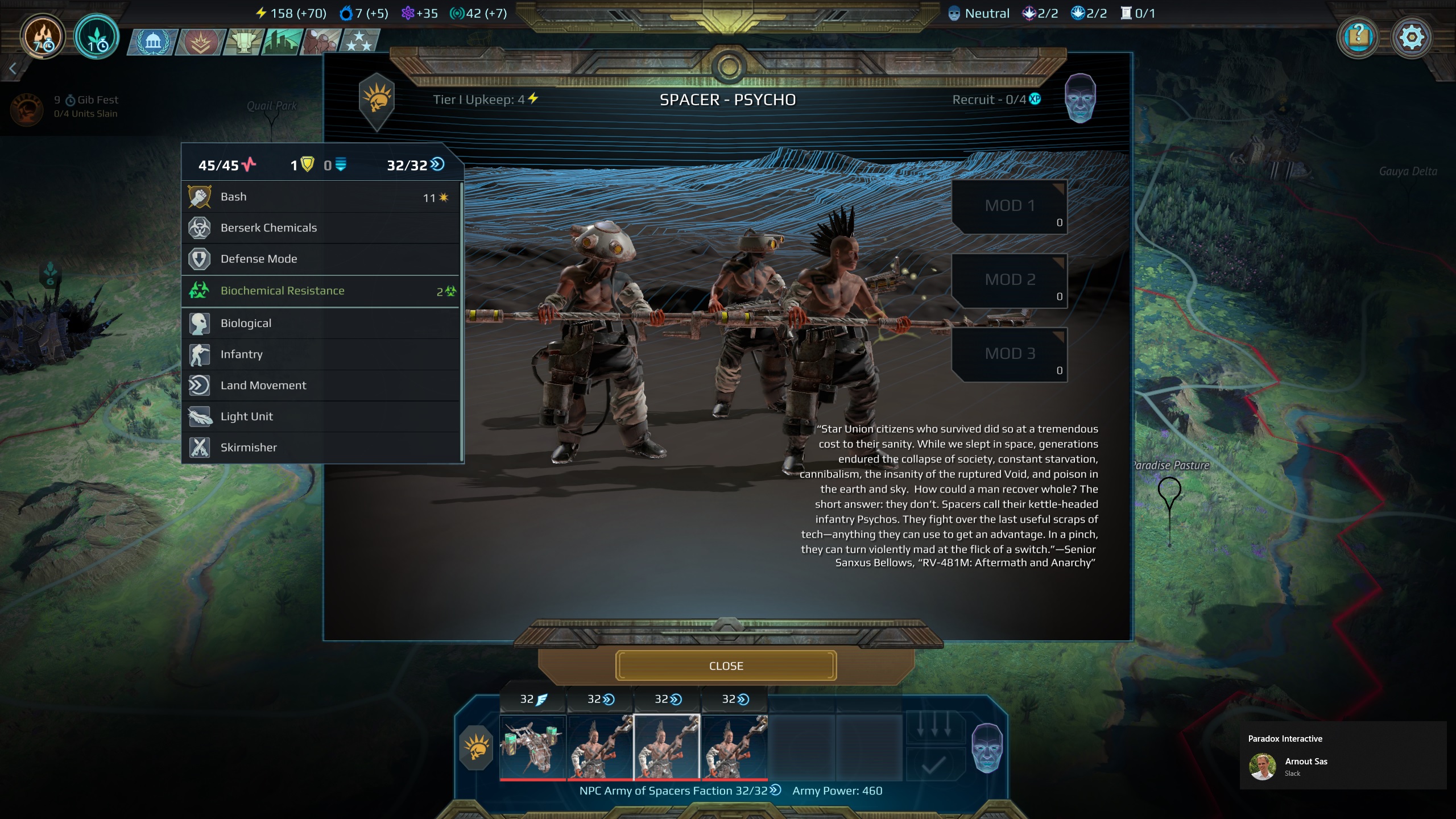 The assault cavalry of the Spacers. A pickup truck with scavenged guns welded to its bed. Reckless Crash is a melee attack with high impact stagger and knock back on light units.

When in a tight spot the drivers will blow the truck up in a big explosion, it will blow up when it HP reach zero too. Unbeknownst to the drivers, they won’t respawn as in the virtual words of old. 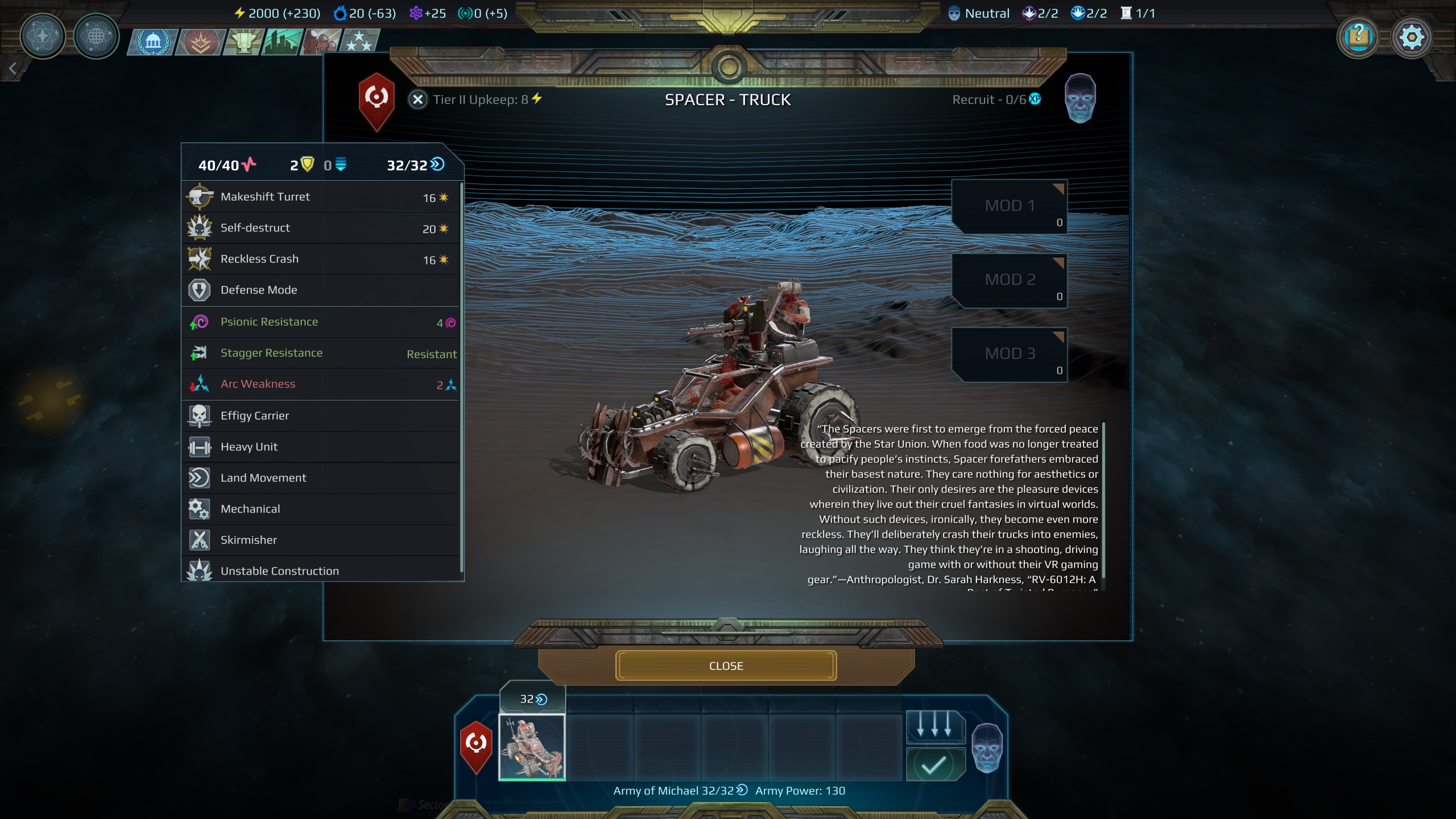 This disfigured mutant, wants everything to look as horrific as himself. It has a precision -and AoE corrosive attack called Acid Bath. 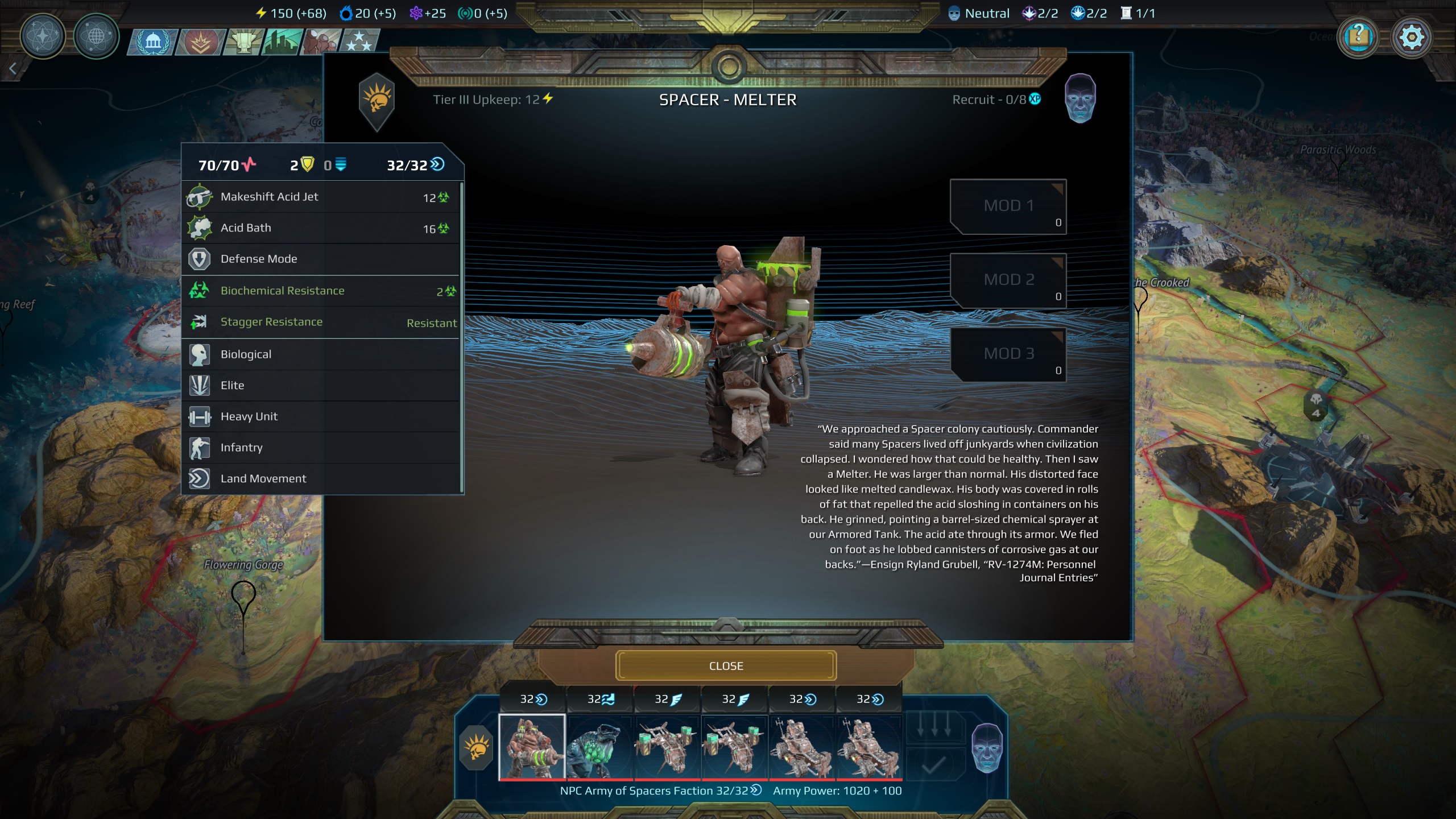 This improvised aircraft drops burning high explosives on enemies and has make shift laser good at taking out other aircraft. Its Crash Down passive means will seek out a nearby enemy and crash on top of it when its shot down. 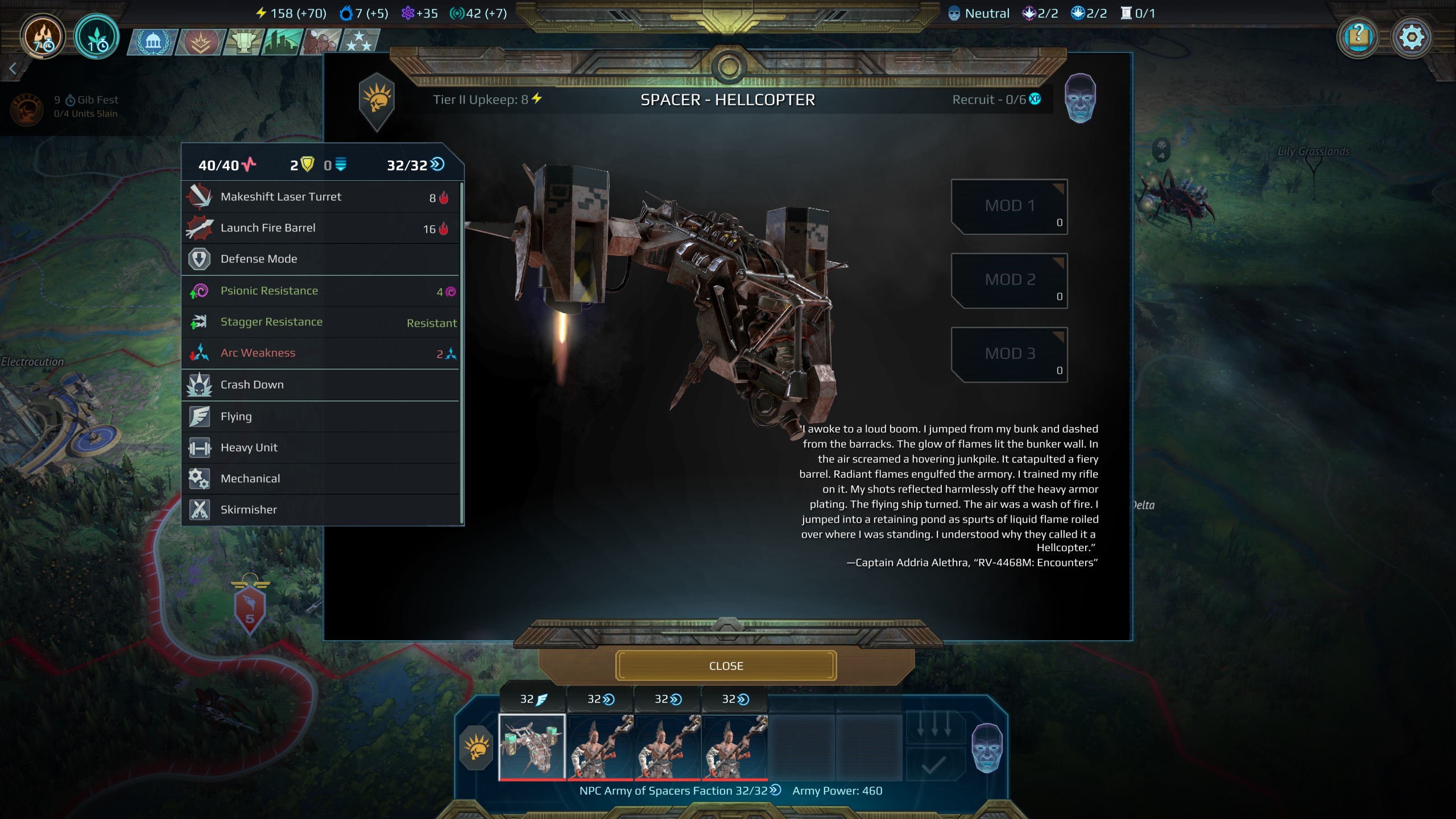 The spacers don’t limit their raids to land…. Has the ability to board (commandeer) other ships. 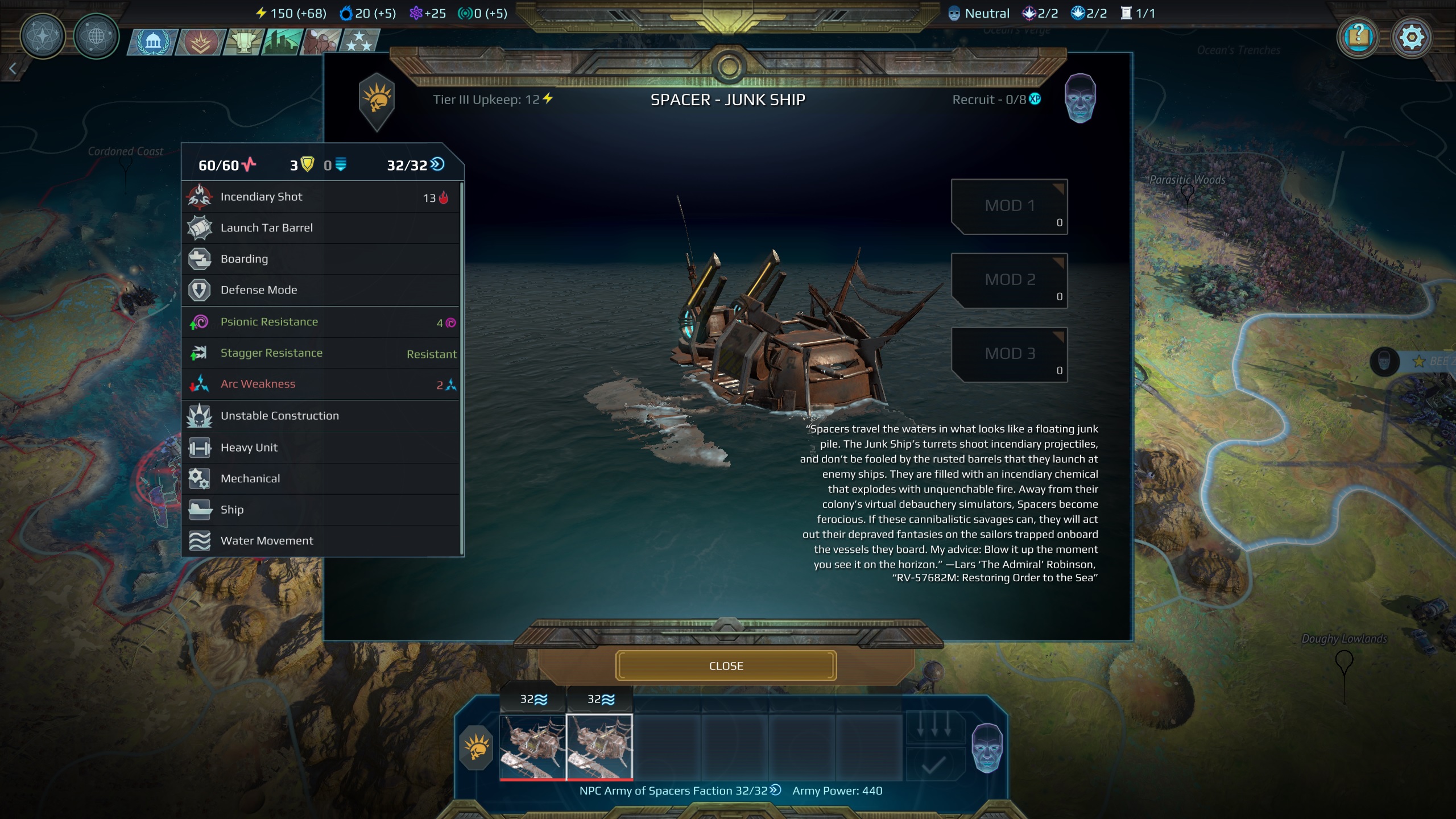 One of the craziest units in the game.

Its madden rant causes psi damage by passing armor and has can lead to broken minds and insanity.

It can debuff enemies with mark of the Effigy. Making it easier to hit and making the target drop a Spacer Effigy on death.

Its Effigy Hysterics ability will boost the Damage bonus of all effigies on the map.

When it gets killed it leaves a Power Vacuum. All Spacer infantry types get the Power Grip ability which allow them to become the new Prophet if they reach its carcass. Oh no! 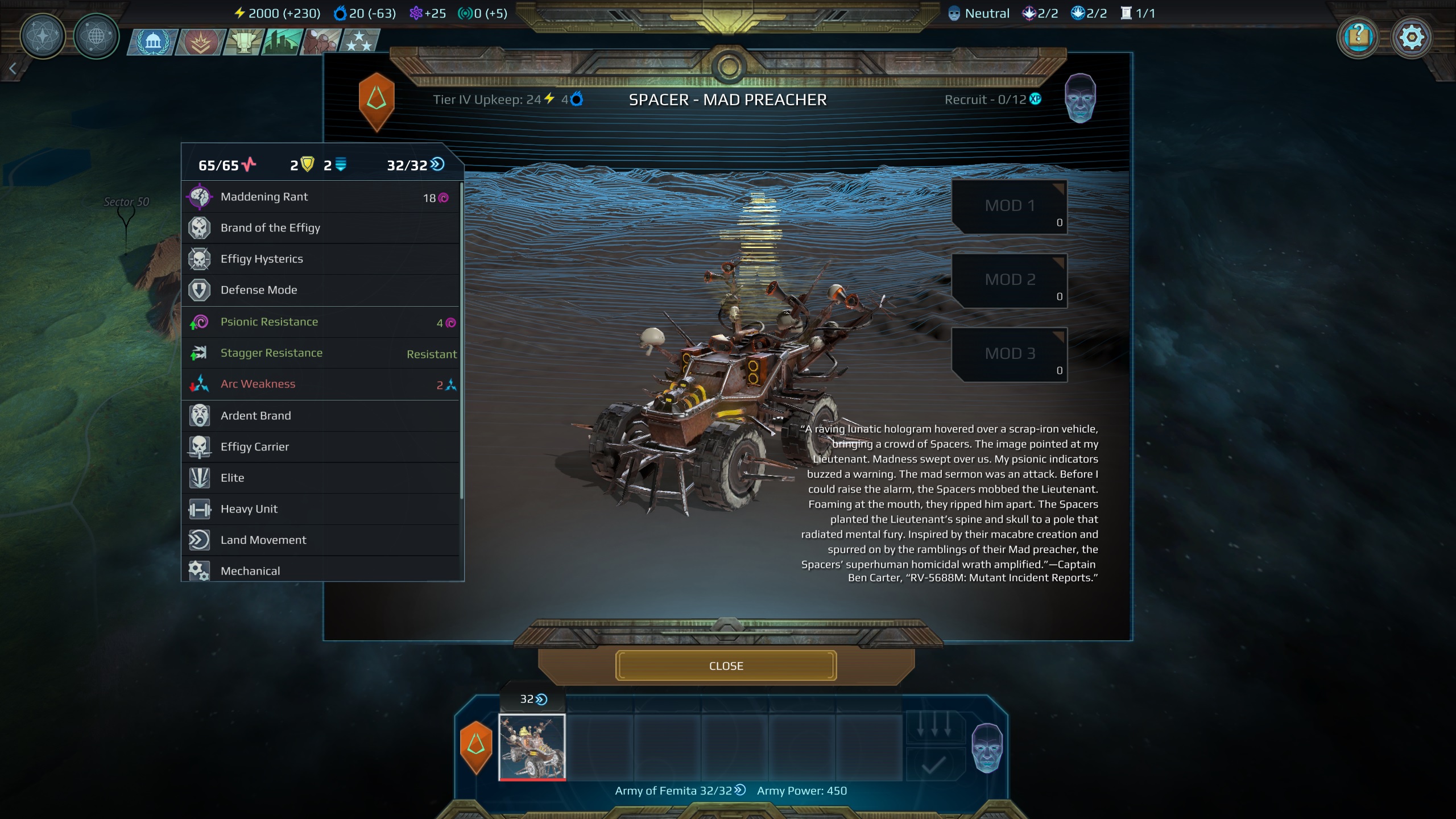 Spacer dwellings are large shanty towns. But they have some very useful gear for players seeking to establish friendly relation with them. 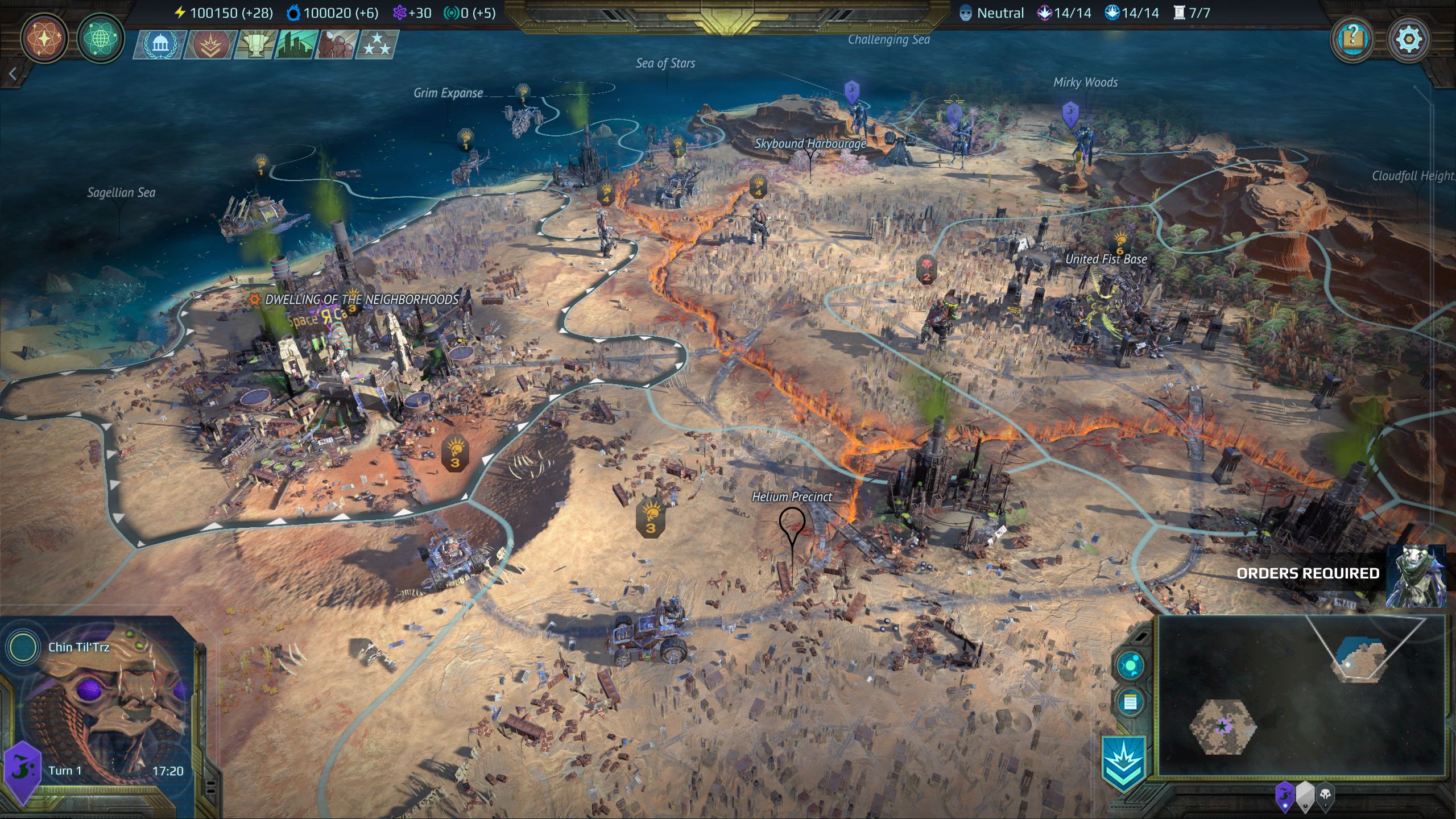 Next to units, here is some of the stuff you can get from them:

So how will you treat the Spacers? Whoop their raider asses and show them who's boss, or show them the way back to "civilization" (whatever that might be in your empire)
Expand signature
Lennart Sas
Director Planetfall, Managing Director, Co-founder @ Triumph Studios
Planetfall Development Diary List
Follow me @ Twitter

I have a feeling the Spacers were inspired by the Angry German Kid.

Sounds like conquering a planet full of Spacers would be fun...

@LennartGS - will there be a Paradox (or other official) Wiki? -What about the 3 DLCs from premium preorder? No Information right now...

Getting a really strong Borderlands vibe off of these dudes, especially since I gather Borderland 3's Cult of the Vault takes cues from streamer culture. (Though IIRC, the first mention of the Spacers' concept predates the B3 trailer featuring the CotV.)

I guess there's only so many directions the Mad Max pastiche can evolve in, though, and they inherit enough differences from the world they inhabit (a fallen mega-empire rather than a corporate hellscape). Still looking forward to putting them to use in my armies.

Which reminds me -- will there be mods or other ways for non-Spacer units to draw buffs from effigies?
Expand signature
"A wise enemy is better than a foolish friend." -Arab proverb

Funny, I think I've met some of those spacer dudes when I play online games...

Strip the flesh! Salt the wound!

Herr KaLeu said:
@LennartGS - will there be a Paradox (or other official) Wiki? -What about the 3 DLCs from premium preorder? No Information right now...
Click to expand...

Not in the works internally but there is a massive fan made one for AoW3.
Of course the game has a massive encyclopedia called the Imperial Archives
As for the Season pass / DLCs, its unfortunate we can not disclose more about this. I can say it'll be substantial materials. Not just packs of clothing for your leaders.


TheGrinningMan said:
Which reminds me -- will there be mods or other ways for non-Spacer units to draw buffs from effigies?
Click to expand...

LennartGS said:
As for the Season pass / DLCs, its unfortunate we can not disclose more about this. I can say it'll be substantial materials. Not just packs of clothing for your leaders.
Click to expand...

Yay! That's exactly what I was hoping to hear! More factions! More secret techs! Even more planet & terrain types! Any/all would be great in my book.

just one small thing: the boat is a missed oppurtunity - would have prefered one inspired by the Smokers from Waterworld

Looks great!
Wait, can we have this pls? 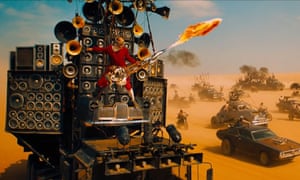 This DD actually gives you a lot of info about the fall of the Star Union. I theorize that in some moment the Star Union Steam-equivalent have got his servers down. Common people got angry for that and without games to keep them distracted they discovered the dark secret of the Star Union, the Syndicate have buy all the shirts in the know galaxy. So shirtless and angry because they didn't got games they rebelled. So great was his bare-chested fury that awakened their psychic power, and with so many shirtless psychics complaining for the lack the VR games the void was allowed to enter our dimension and swept the Star Union.
Another mystery solve


LennartGS said:
Unbeknownst to the drivers, they won’t respawn as in the virtual words of old.
Click to expand...

Oh, don't you hate when that happens?


LennartGS said:
Of course the game has a massive encyclopedia called the Imperial Archives
Click to expand...

Thanks for that, patching the Imperial Archives or the Tome of Wonder isn't an easy work, but is so much helpful to get that info in just one place, and inside the game itself of all the places. Thanks for the hard work
Expand signature
Still waiting for Runemaster

daniel8484 said:
Looks great!
Wait, can we have this pls?

You know... it would work as an alternate skin for the Mad Prophet.
Expand signature
Friendship is mandatory. Violators will be hugged.
F

Cool! These seem to have some very interesting synergies and abilities...

I feel the concept art especially of the vehicles is inspired by Halo. Truck with Warthog and the Hellcopter with the falcon.
A very interesting looking and original background race!

LennartGS said:
Unbeknownst to the drivers, they won’t respawn as in the virtual words of old.
Click to expand...

If their faith is strong enough, they will, and so will we if anything ever happens to us. Gamers are immortal.
Expand signature
Just "Fogcrow" on the Age of Wonders III forums

LennartGS said:
They originate from the Star Union’s mega city masses that were kept in check with limitless virtual entertainment and nutrients laced with pacifying chemicals.
Click to expand...

Nice. Could also make the Mantra of the Branded really tempting for the Syndicate if they can stand the smell of the ones they buy it from. They've got the psionics needed to get the effigies on the field, and don't mind sacrificing Indentured to do it. (Of course, this is just theory-crafting.)
Expand signature
"A wise enemy is better than a foolish friend." -Arab proverb