Jump to latest Follow Reply
Menu
Install the app
You are using an out of date browser. It may not display this or other websites correctly.
You should upgrade or use an alternative browser.
Age of Wonders: Planetfall 1636 Bug reports 1635 Suggestions 536 User Mods 94 AoW: Planetfall: News and Updates Archive 41 Multiplayer 54
Show only dev responses

Hi there, today we return with the Planetfall Dev Journals, in a two-part series about the about Planet Map Generation, often referred to as the “Random Map Generation”

Procedural Maps were first introduced in Age of Wonders: Shadow Magic, became more prominent in Age of Wonders III and for Planetfall they have gotten even more important insofar that even Campaign Maps are now procedurally generated.

The tools have gotten so powerful that level designers (and soon modders) have a tremendous amount of control over the planets that are generated, from overall world layout, to starting positions, and unique sector definitions. Further systems allow designers to embed deep story events into the planets. So, it’d be wrong to call our maps “Random Map” as it implies map bereft of human design.

Tech Programmer Lascha is the main architect of the systems described here and he contributed to writing this journal. 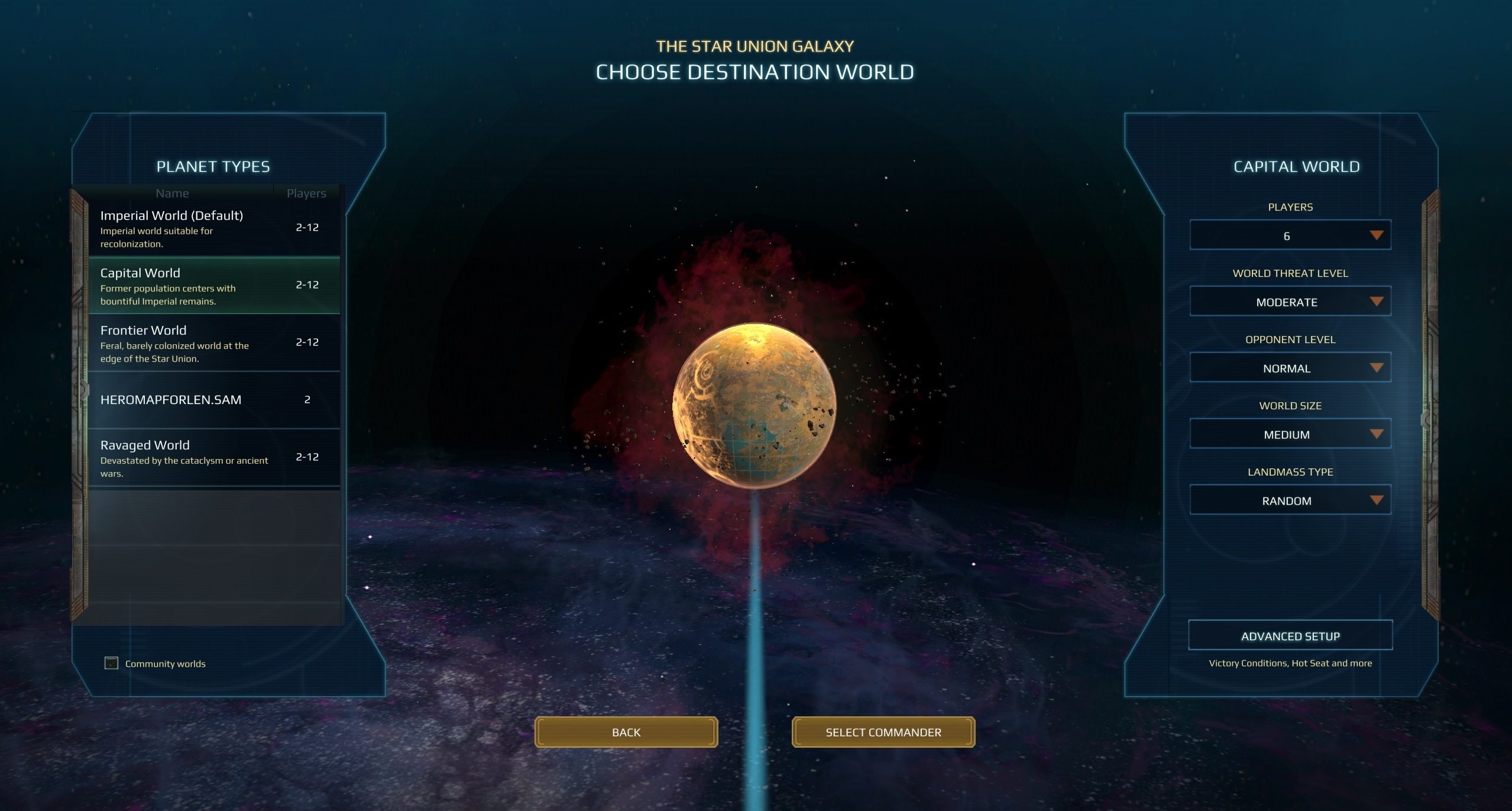 First some starting goals for our Planet Generator: 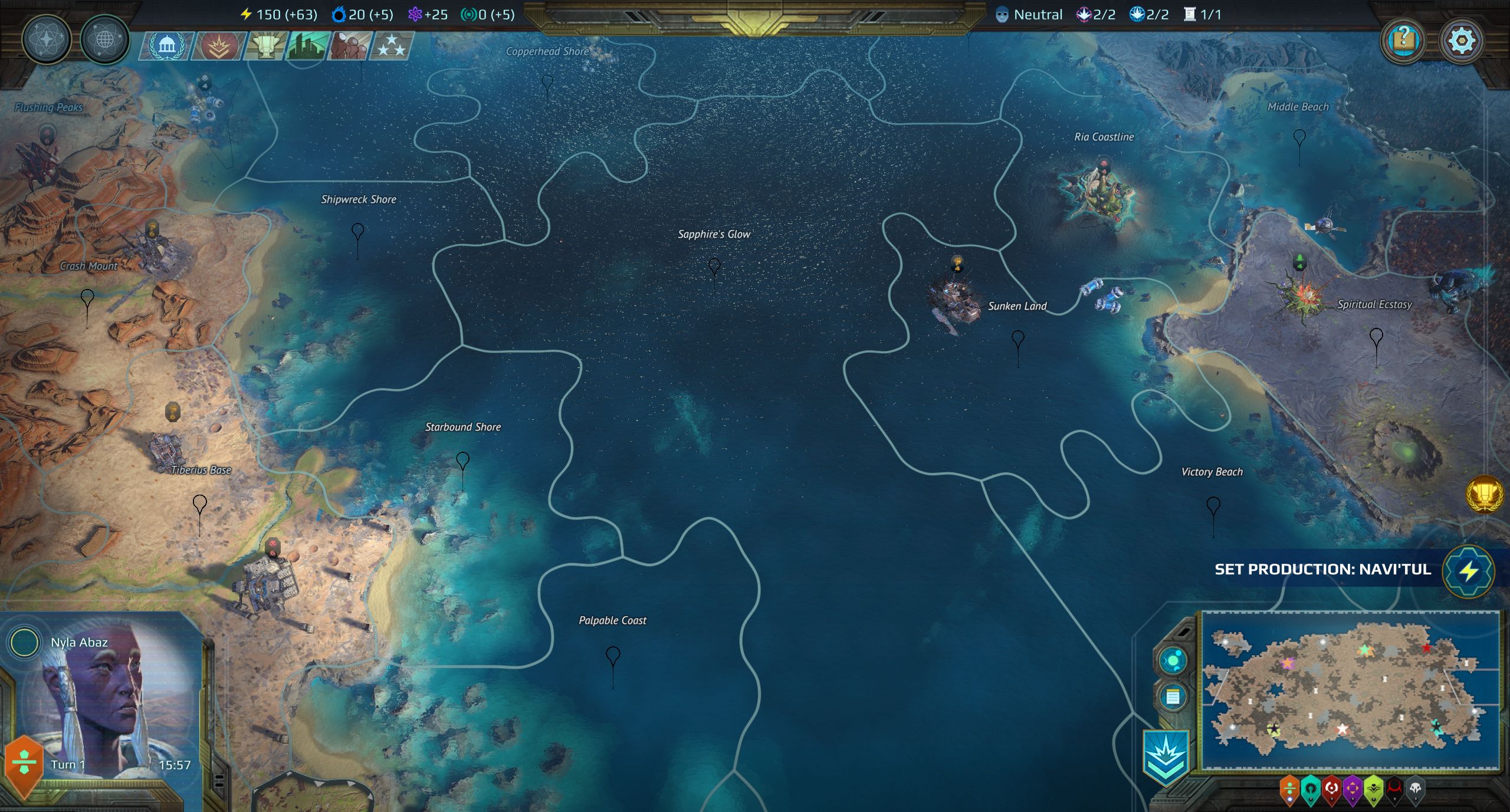 Ocean Sectors as well as large uninhabitable deserts are merged together into larger sectors. These buffer areas break up the patchwork.​
Player Placement

Player starting positions (and therefore the number of players) are a big factor of the general balance and pace of the game. In the map generation it is the first type of sector whose positions are determined.

In AoW3 the players positions form a sort of circle pattern (actually an ellipse since the maps are not square). But Planetfall introduces wrapping maps. As you can imagine a circle pattern will not suffice anymore as there is no single ‘center point’ anymore.

Instead of coming up with a fancy new algorithm, we use Player Position Templates. The generator picks a template at random given the number of players on the map. Each template determines the relative positions of players on the map, with various configurable settings, fixed team placement support for multi-player, and preview options.

Player Start template with randomization ​
The image should be read as follows:
Sector Generation

When life gives you sectors, make sector generators. And so, we did! The requirements were mainly having control over sector shapes, sector sizes (landmarks, large oceans) and sector placement (especially distances between important sector types!).

The sector generator in Planetfall has really evolved over time, but this illustration is a good example of how it all started in early development: Add balls into a box (with collision) and when it is full, change them to sectors. 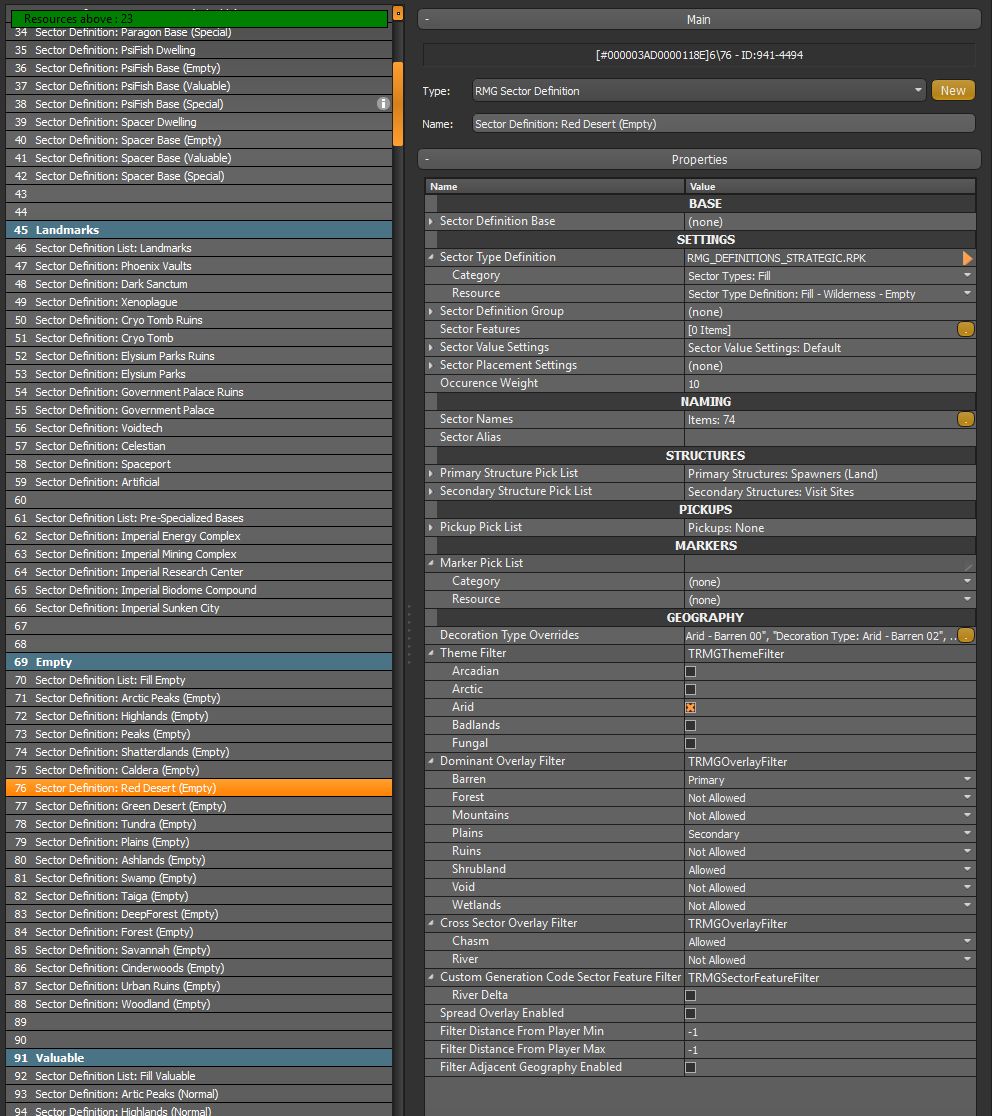 Sectors Definitions link to name sets. The size of the list depends on the frequency sectors occur (so lots for wildernesses and fewer for rarer landmarks). Of Campaign or Custom scenarios can have unique names. ​ 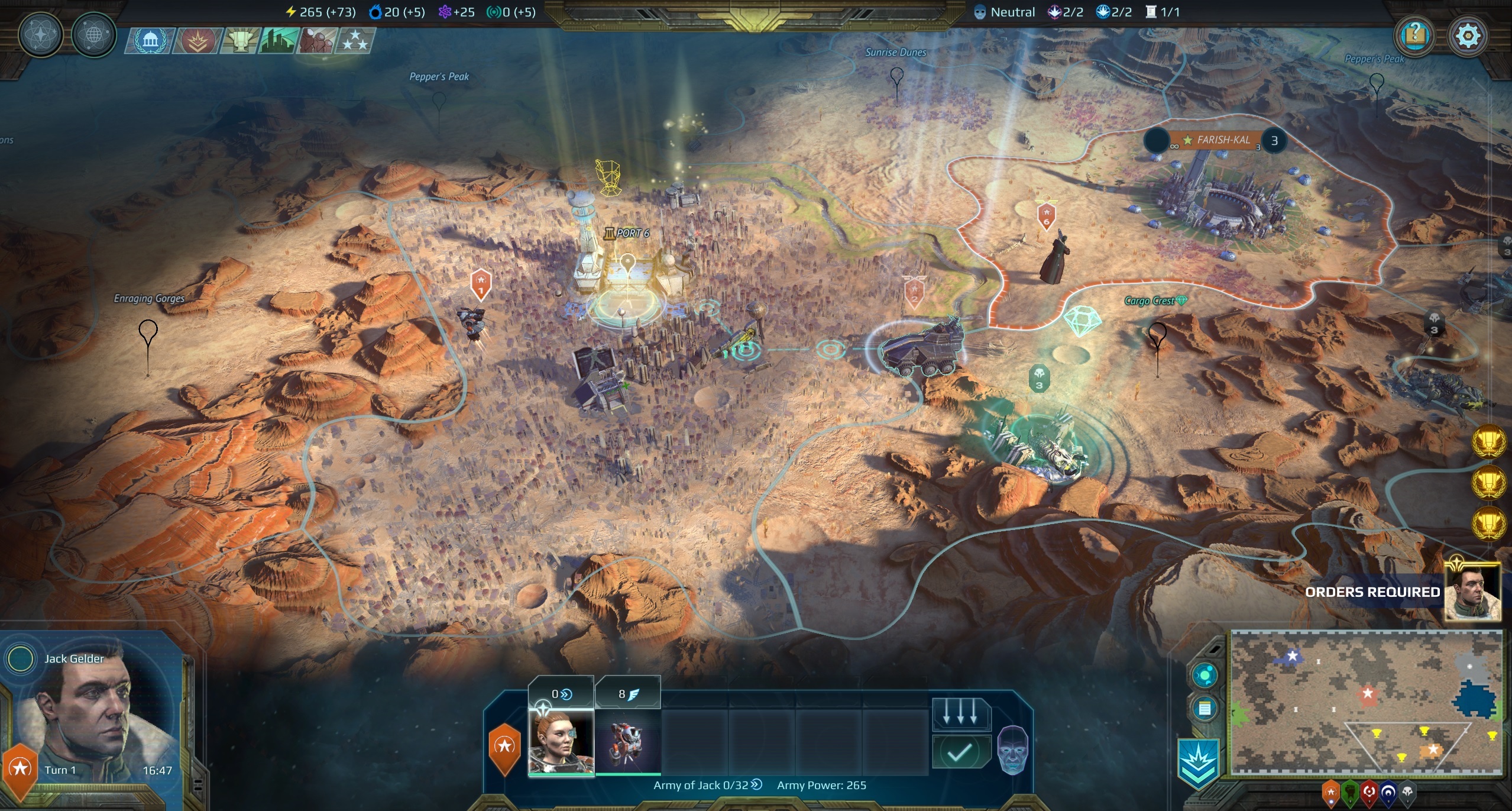 The above Space Port Sector has been defined to always spawn in a sector with city ruins, contain charge and repair station station sites, always be adjacent to the player's starting position and always have a quest associated. ​
Please return next week for part II, where we’ll look at Planet Setup, Geography Types, Advanced settings and campaign planets.

Man this is so cool! I can't wait for this game. I loved Age of Wonders III and this is shaping up to be even better!

This really looks great, the way the "random" maps are generated is interesting, especially the sectors one. Since i play Stellaris, sector can be a fearsome word

What kind of maps can be get? Diverse earth-like, desert, forest, cities, mountains and oceans, single biome planets, desert, forest, cities, mountains or oceans? What really would be great is a ruined ecumenopolis like map, just buildings, neighborhoods for sector, crumbling ruins for forts and just the minimal nature in the parks only. The ruined city ravaged by war is a really lovely stage for another war and that kind of maps are not usual in games. A complete map of nothing else than urban warfare is pretty rare in almost any game, but its addition in Planetfall make sense lore-wise. Your Commander could be returning to one of the main Star Union planets and then encounter just ruins and war. Emerging story-line everywhere
Toggle signature
Still waiting for Runemaster

i wonder about the "random" campaign maps - when do we hear more?
P

That circle gif is so satisfying for some reason!

<3
you HAVE to put a "of course we LOVE you" button to properly interact with such posts!

generating a map looks like playing lotto.
RELEASE THE BALL MACHINE!
Toggle signature
Feel my fingers in your wound while my eyes ascend the gloom
Questions wasting all my time - I see your eyes detesting mine
Sick of a life you never had, in dead motion, you look so sad
I could care less if I'd like - I let you go into the night

Holy cow, now THAT is a developer diary! What a cool look into the map. I especially like the use of... random ball theory? ... to keep sectors equal but slightly different.

On that note, is there an option to generate oddly shaped sectors? Throw a banana or a half-moon in there too?

Good reading. And it sounds like the modders are going to have a lot of room for tweaking things.

HTG2931 said:
On that note, is there an option to generate oddly shaped sectors? Throw a banana or a half-moon in there too?
Click to expand...

We would like to make more sector variation, but rules like minimum# connecting sectors for provinces, minimum center area width, makes this less easy as it might sound.
There are already variations - like large sea sector or the elongated "Cargo Crest" sector in the desert screenshot.

LennartGS said:
We would like to make more sector variation, but rules like minimum# connecting sectors for provinces, minimum center area width, makes this less easy as it might sound.
There are already variations - like large sea sector or the elongated "Cargo Crest" sector in the desert screenshot.
Click to expand...

So we will not get a map with six sectors shaped like the word "SECTOR"?
Toggle signature
Still waiting for Runemaster
G

I don't know if this is a complete list of Landmarks, but they sound pretty cool.

Nice to see how all this works and what logic generates the maps. And wait, wraparound maps? So you go in one side, you come out the other? That's a great idea! Have not seen that in a strategy game yet! (though, flat earthers will be pissed. )