Hi there, following up to last week’s entry on Syndicate’s background here is part two, where we look at how this ancient faction of ruthless traders, slavers and manipulators play on the world map and in combat. 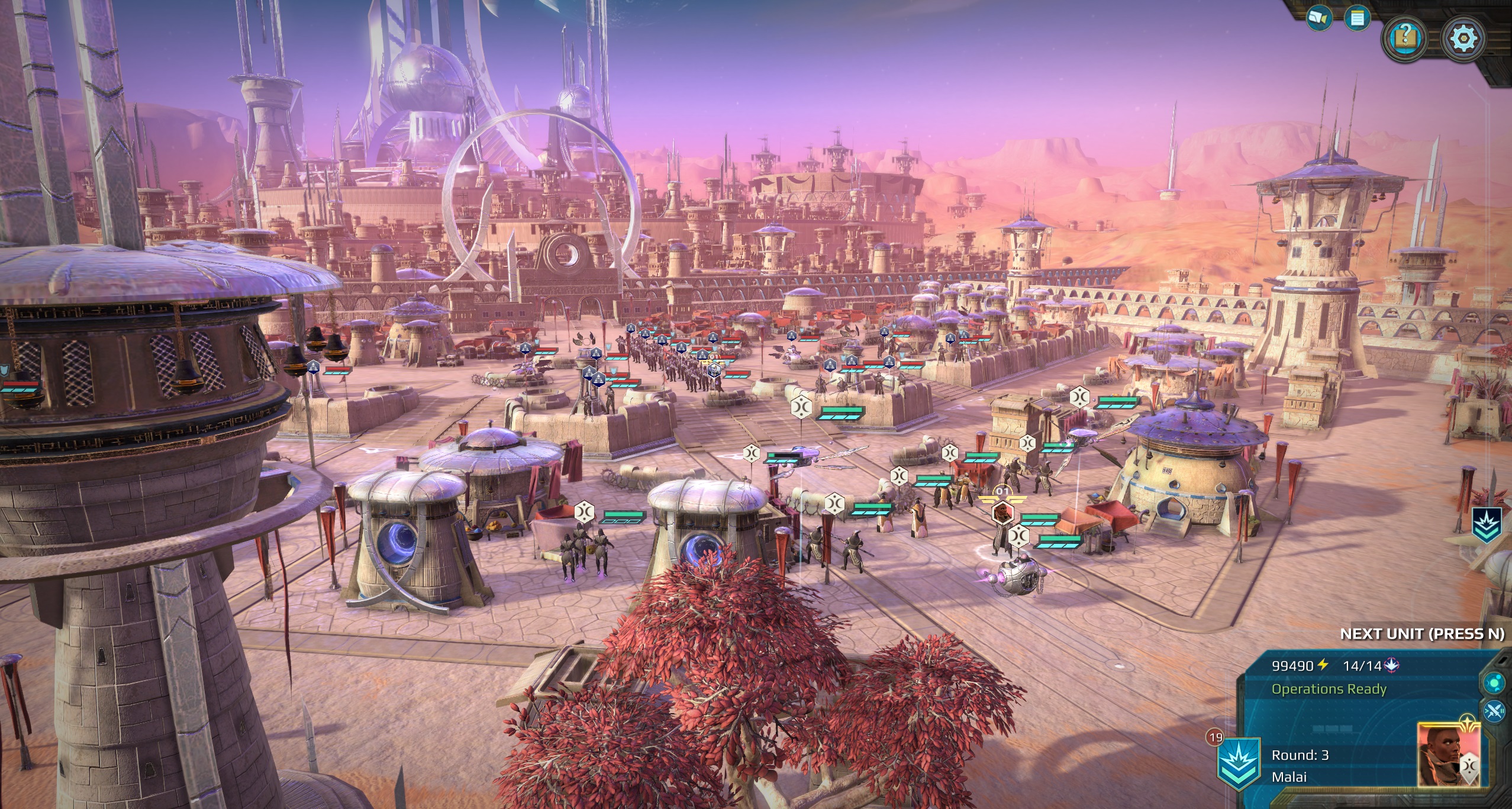 A Syndicate Colony being attacked by .. other Syndicate. Business disagreements can lead to this.
​
Gameplay Style:

The Syndicate are extremely manipulative, specializing in both psionic attacks and covert operations. The Syndicate specialize in Cover Operations, the Cloak and Dagger doctrine gives them a huge boost to their operation strength, while One-Way Trust raises their operational defense, both against their enemies and any ally who is foolish enough to enter an intelligence sharing pact with them.

Their Deep Infiltration doctrine allows Syndicate spies to unearth detailed military data on their enemies, granting a damage bonus against them. The Bread and Circuses strategic operation allows the Syndicate to distract populations from their scheming and exploitation, boosting target colonies’ happiness.

The Sensor Infiltration operation let the syndicate mark an enemy army and tracks its position for 5 turns. While cloaking tech hides their own.

Here is a collage of some of their abilities: 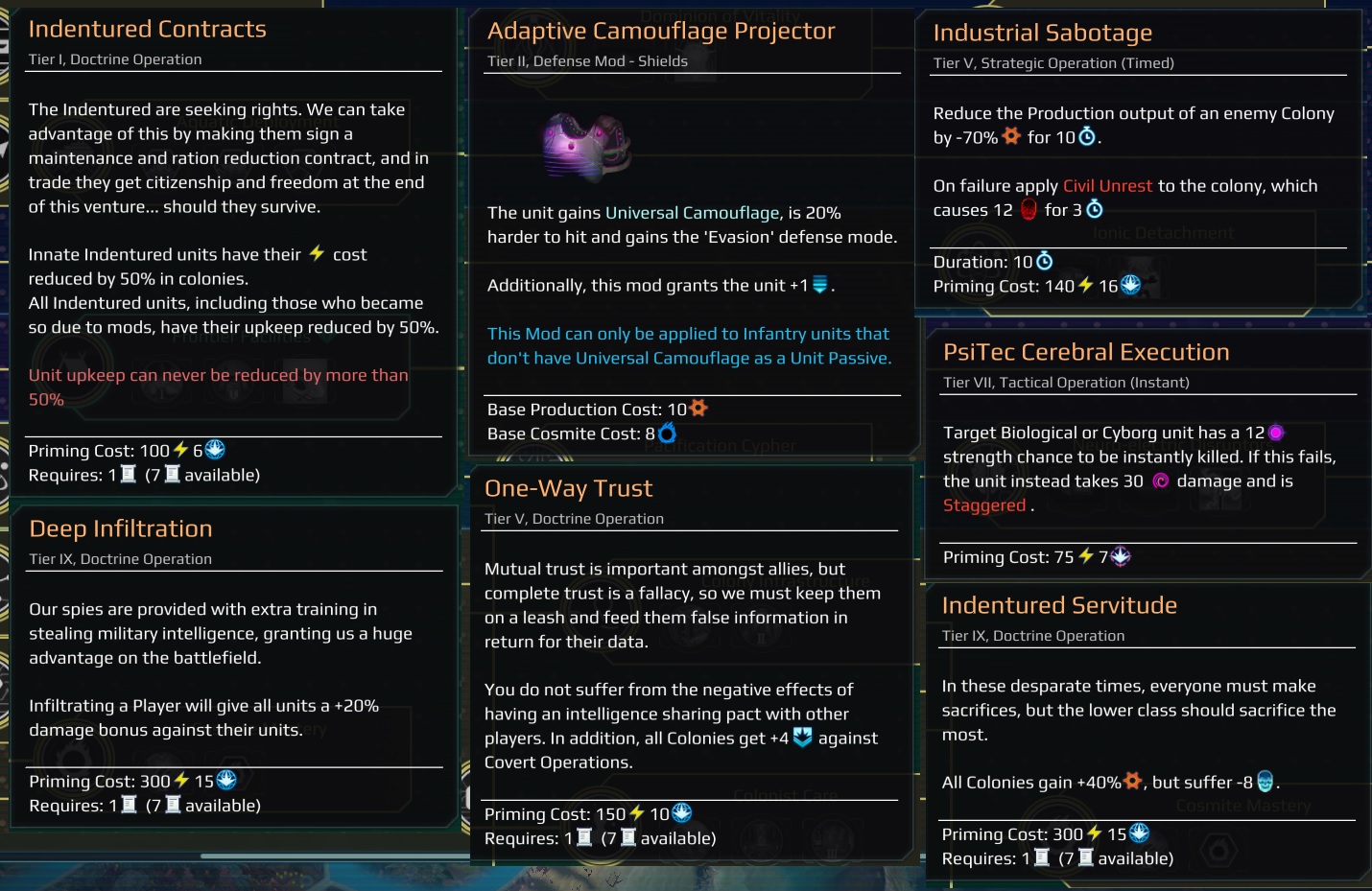 Using their extreme wealth, the Syndicate enjoyed a monopoly on so called "PsiTec", devices that allowed normal humans to make use of psychic energy. They build war machines such as the wraith tank that contained powerful PsiTec amplifiers, allowing human psionic potential to be raised to a terrifying degree.

The Subjugator is likely one of the biggest asshole units in the game. It has an Agony field that can break the mind of enemies. Its Control Collars can subsequently capture them; these poor souls will survive after combat as Indentured. To top it off they have the ability to bring dead Indentured back to life using their cerebral control collars. His chair is available as a Hero Vehicle Item, so your Commander can be an asshole too. 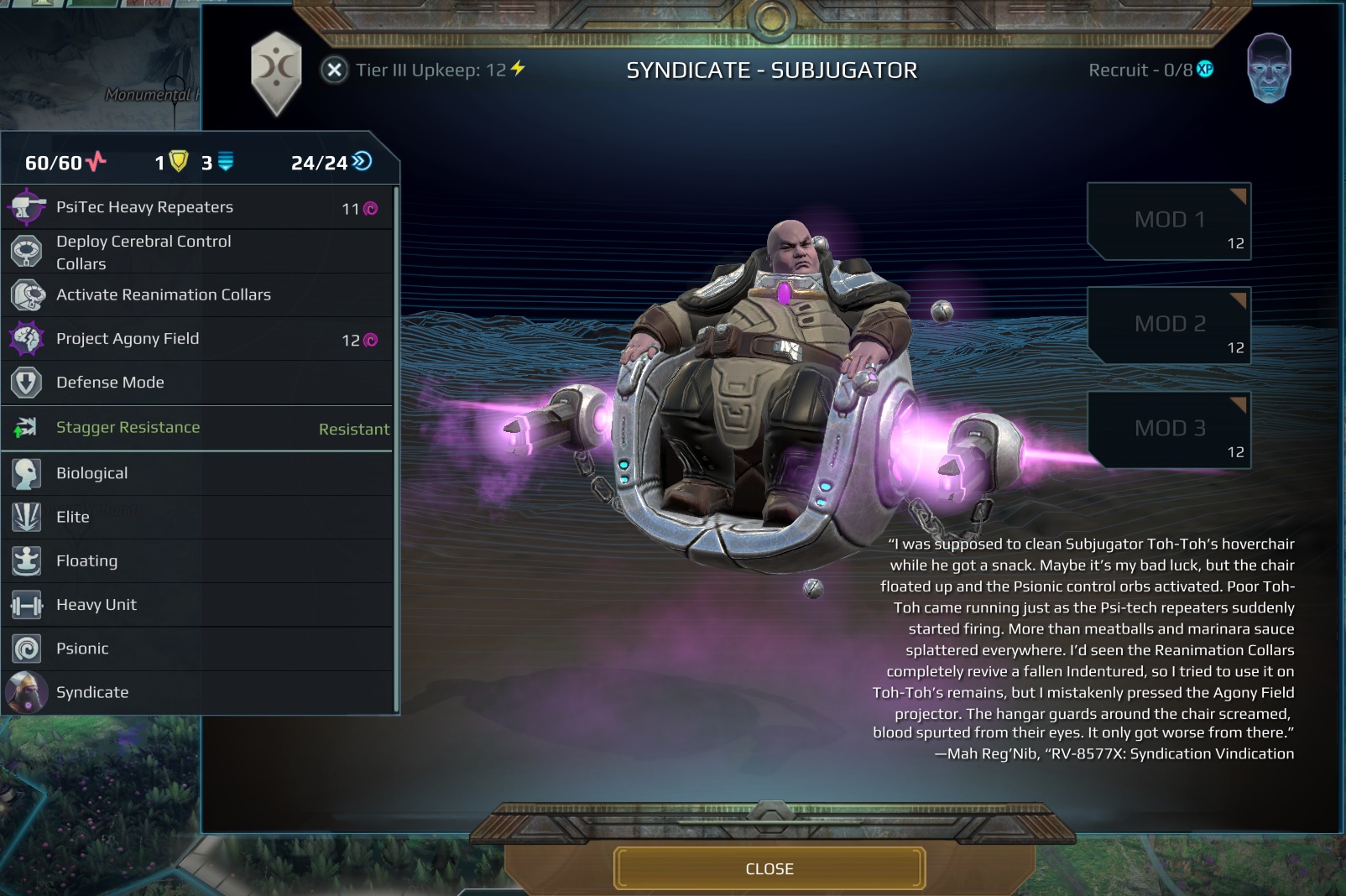 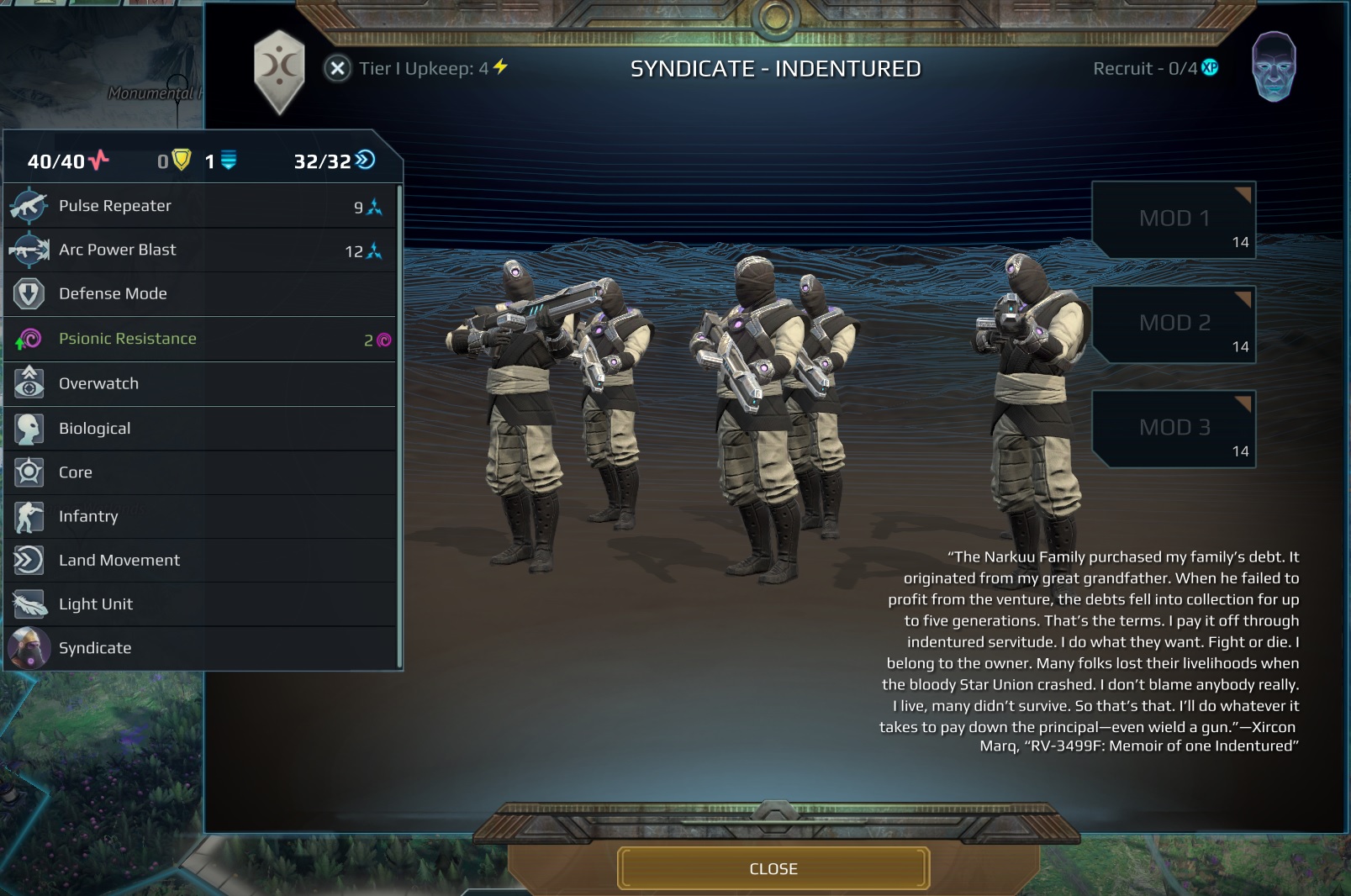 The Overseer, also is also a nasty piece of work. It has an ability to override the Cerebral Control Collars. This deals damage to the target unit, but it makes it regain their action points, gain stagger resistance and its HP can not be reduced below 1 until the start of next turn. 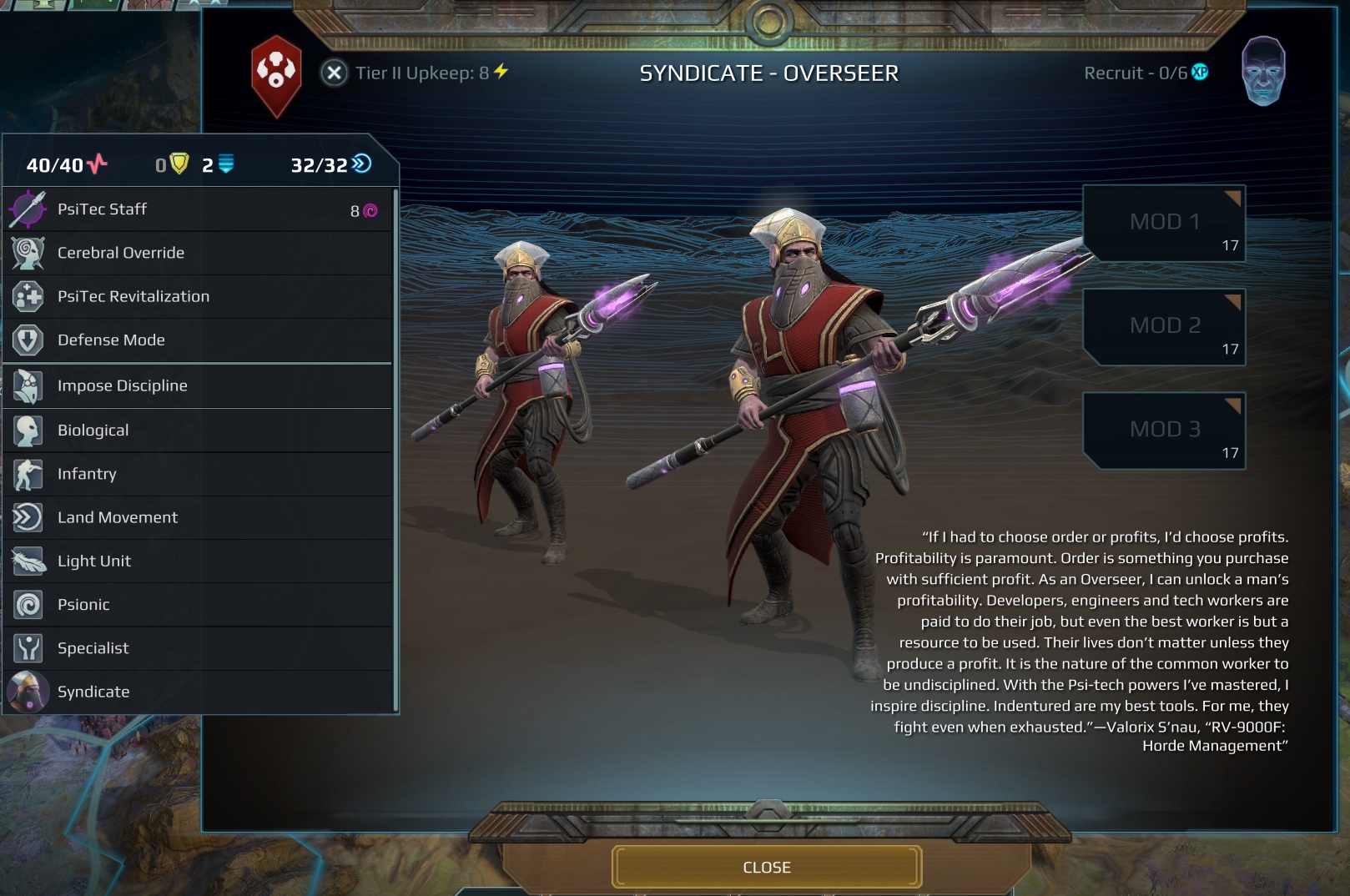 Guild Assassins play an important role in Syndicate Society as you can see by their description. 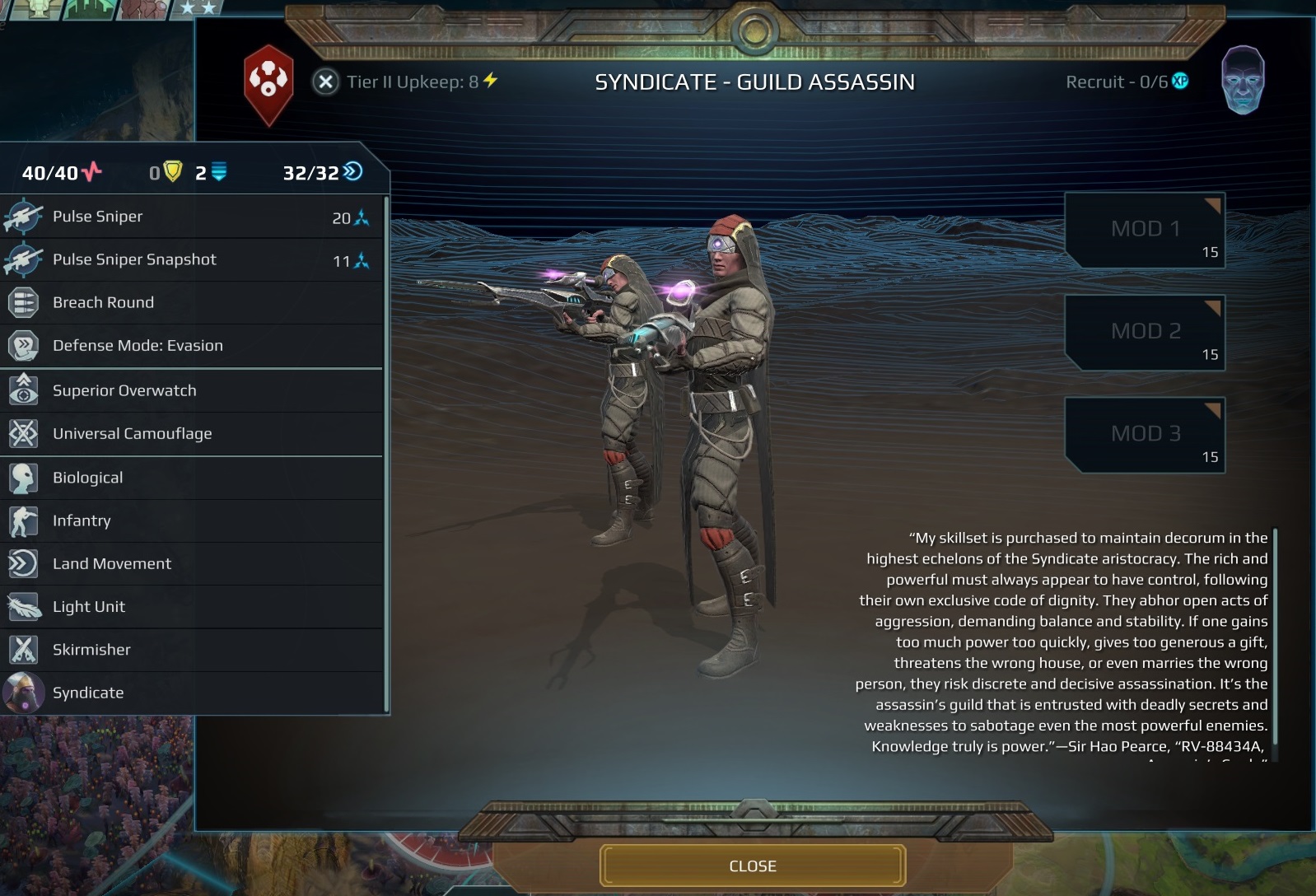 Next to Units, the Syndicate field an arsenal of terrifying Mods and Ops, allowing them to further subjugate enemies and keep their own forces in line on the battlefield.

The Cerebral Amplifier Module gives the unit and all Indentured units in the army a +25% critical hit + 2 shields and its Purging protocols dispel all negative status effects on target friendly units.

The Psi-Tec Cerebral Execution Combat Operation attempts to instantly kill a biological or cyborg unit, if it fails the unit is staggered.

Many syndicate units don’t like touching the filthy ground. All syndicates vehicles float, giving them excellent speed on the world map and giving them a huge advantage over the water, since they don't need to load their vehicles onto transports. They do have one less water unit because of this, however.

The Wraith is Teleporting Lev Tank. 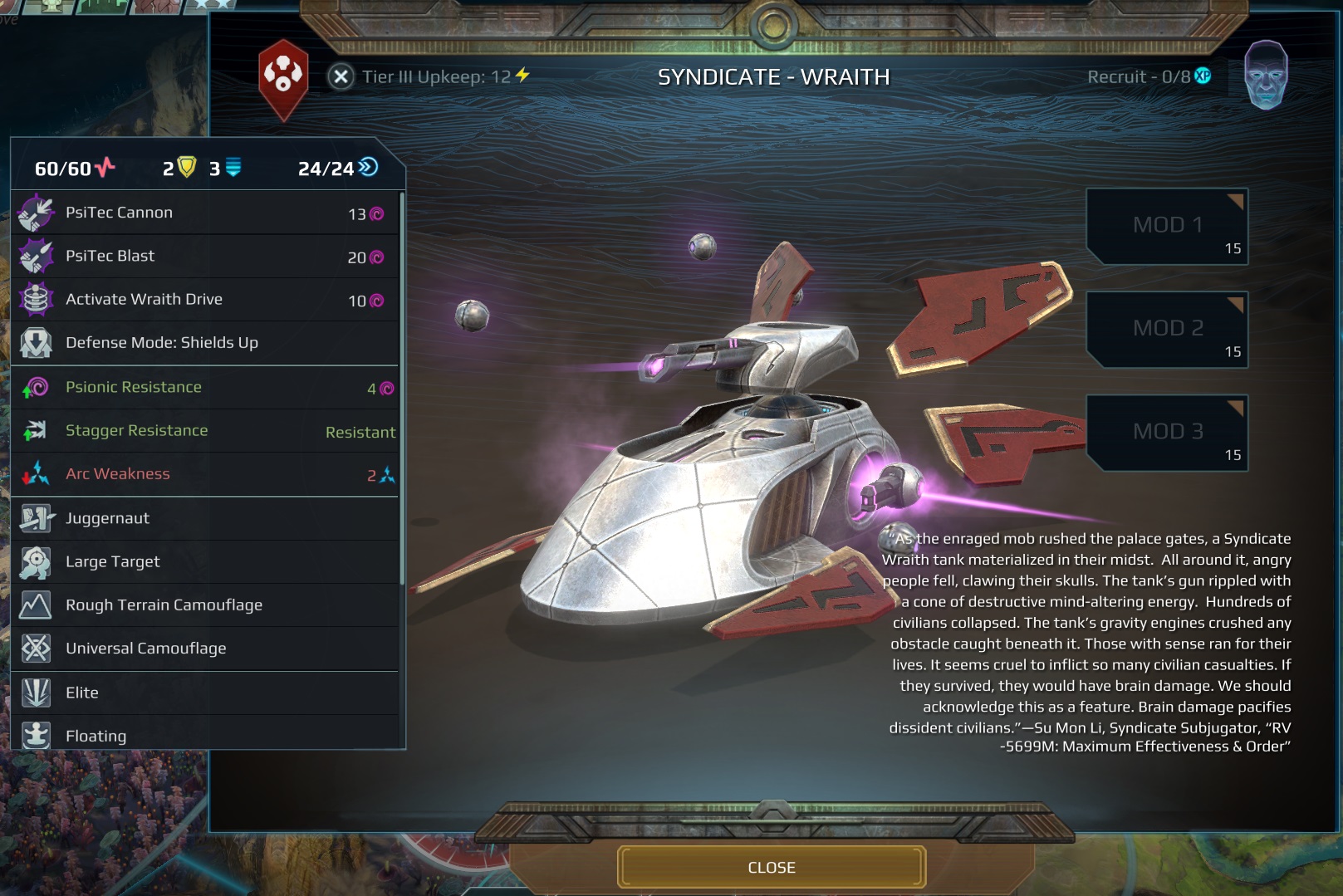 The Sentinel is a combat summon. 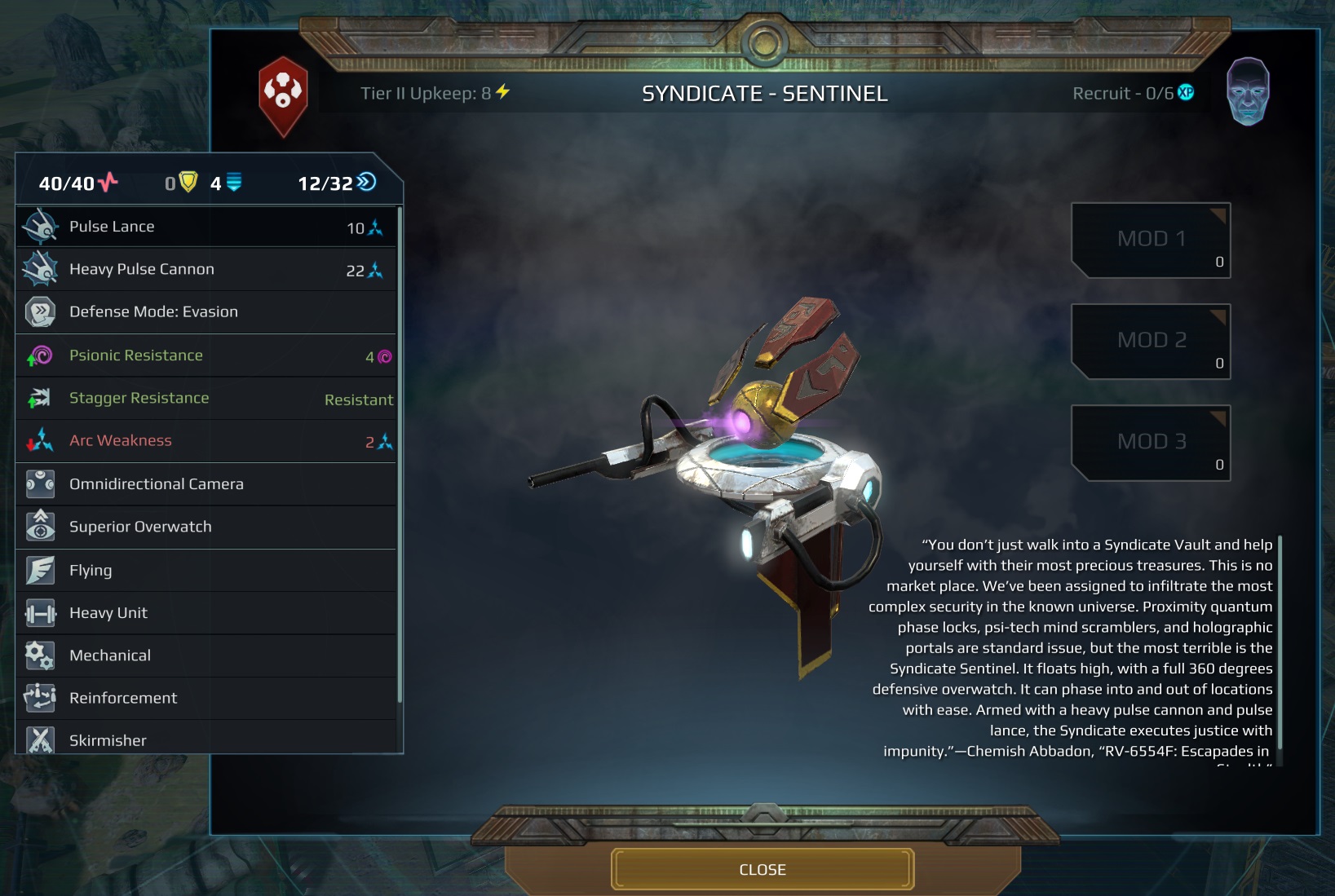 The Mirage makes enemies see things that aren't there and makes units that are there harder to see. 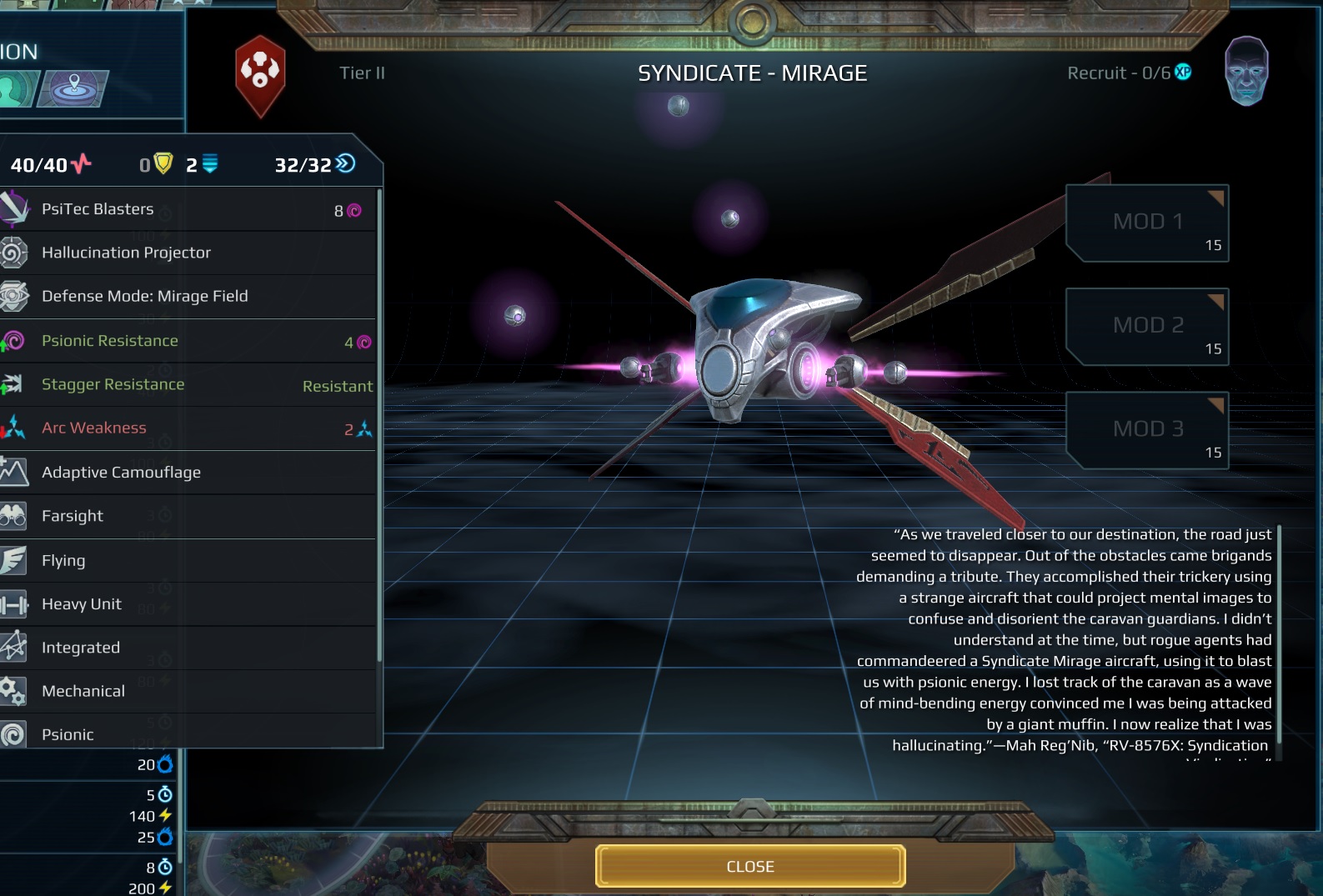 The Zenith: The Pride and Joy of any Syndicate House. Demolishes filthy hovels from a far, while the glorious house anthem plays. The enemies spill out like fleeing rats, only to be captured captured as fresh indentured. 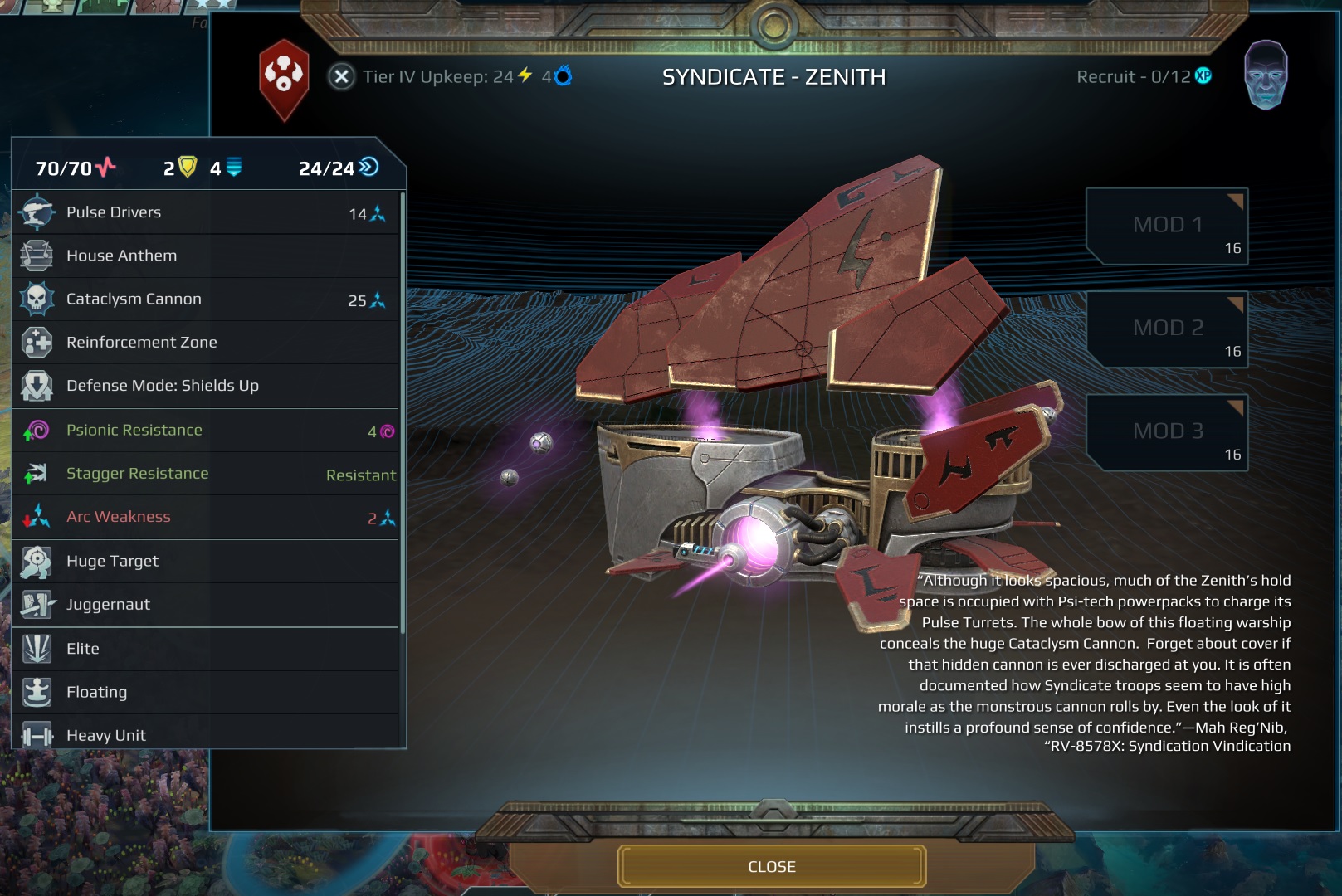 So. How would you play them? What Secret Tech combo's would you try?

Closing note: Planetfall is a couple of months away, why not check out the fantastic Imperator: Rome by our friends at PDS in the meantime. It launches today - Bonam fortunam!
Expand signature
Lennart Sas
Director Planetfall, Managing Director, Co-founder @ Triumph Studios
Planetfall Development Diary List
Follow me @ Twitter

Lol, this is great stuff, depravity turned up to eleven, to such a degree that it becomes hilarious... I love me some humour in AoW games

I hadn't really decided yet on a favourite faction, but Syndicate is almost there! *waits for Assembly*

LennartGS said:
so your Commander can be an asshole too
Click to expand...

Don't worry @LennartGS , mine will be an asshole with or without chair
Just one question. How much common are muffin's attacks in the Star Union
Expand signature
Still waiting for Runemaster

They really have a unique look, love the whole "wings and guns floating in the air via invisible force fields" look. Jupiter Ascending had similar ships, it is a neat idea.
They sound fun gameplay-wise, I always loved the Nomads in AOW2 for their Slaver that could similarly basically get you any unit (with some luck) as your own. Seems they took this to the next level with the Indentured mods. I wonder if this means if you use the control collars in battle, the units you get will have such mods equipped after the battle?

The unit you get is always Indentured and I guess you can't equip Indentured with Cerebral Control Collars Module.

I'd wish other races had such great and detailed Dev Diaries...
G

I'm curious what the Zenith reinforcement zone is. Does it summon Sentinels or Indentured?
G

Only the Runners and the most Oracles weren't shown.

I'm curious what the Oracles are.

The Wraith and the Mirage are freaking awesome.

The Wraith, A Psionic Teleporting Levitating Tank, including something called a Wraith Drive (again reminding me of Stargate), and that is a Juggernaught (I think it deals damage plowing into enemies).

And the Mirage doesn't deal much damage, but a Psionic Stealth Plane that causes it's enemies to Hallucinate is freaking cool. Add that Psifish Focus mod and it gets even cooler (both Mirage & Wraith).

I wonder if there

Also interesting is that the Syndicate seems to use Psionic Energy as a primary power source instead of stuff like Nuclear, Coal, and so on. Super clean energy.

Also I'm going to play devils advcate and say the Subjectator is one of the least asshole units in the game. Its merciful, because most units just kill you, the Subjectator takes you alive when it can. When paired with Indentured Contracts, the captured former enemies even get freedom and citizenship at the end of the venture. That is more merciful then simple slaughter. And the Subjectator makes sure you do survive, but raising you from the dead via the Collar you wear, making it more likely that you will survive to collect your citizenship and freedom. And yes they have an Agony Field, but is that any worse then the Police using pepper spray, tasers, rubber bullets and other painful weapons to debilate people with pain? Heck being burned, zapped, poisoned/melted, blown up, and brain fried will also be painful.

I hope like the Floating Psionic Throne, the Mirage, Wraith, and Psi Staffs will be options for equiptment for heroes/commanders. I doubt the Zenith ships will be.
Last edited: Apr 26, 2019

I'm really excited for this game! I love the AoW III gameplay/mechanics but don't enjoy the tolkien-esk world/setting.

Great stuff. Syndicate are going to be very much fun to play... also! Just like all the other factions revealed thusfar. How am I ever going to pick my favourite faction like this? All seem to have great flavour. I'm betting that Assembly will be awesome too. Still have a hunch they will be my ultimate favourite.

BTW, small typo in the description of Indentured Servitude. Says: desparate which should be desperate.

Ridixo said:
Just one question. How much common are muffin's attacks in the Star Union
Click to expand...

Depends. Are you in gnilflah territory?

two questions. 1 When's the stream? For a game that's 3 months from release, there's not much gameplay shown. Shouldn't the marketing guys start doing the gameplay stuff soon, to get people excited and the pre order numbers higher???

2. Mod support and army painter. I like the syndicate and the DVAR, but You put too much leadbelcher on the Dvar, so I was wondering if reskin mods will be do-able in the mod support as well, to have an army painter like in W40K? Or different kinds of hihglight? Maybe some retributor armor, or balthasar gold for the highlights, like bolts and stuff on the shiny D-VAR armor? And Ironbelcher for the joints?, would be cool if they start out in shiny armor and the armor decreases after time, like getting more old more grey and dust covered, or parts fall of when they sustain damage. That would be so immersive, even though I think the engine can't do it rn.

Control collars are a unit mod. I would assume we could give them to overseers and assassins while subjugators provides the buffing and rezzing. With that doctrine that halves indentured upkeep we'll be able to field many more of them as well.

I wonder if you can provide control collar mods to Subjugators and Overseers... That would imply taking Syndicate society in a very different direction.

Maybe make this really funny and put control collars on your leader?

I´d probably try them with Celestian Tech, just for contradictions sake, since to me, what we´ve seen of the syndicate so far is a first rate picture of the opposite of an enlightened society xD
Expand signature
Just "Fogcrow" on the Age of Wonders III forums
Show hidden low quality content
You must log in or register to reply here.
Share:
Facebook Twitter Reddit Pinterest Tumblr WhatsApp Email Link
Top Bottom