Hi there, this week we’ll be looking at some of the new interfaces that will help you organize your empire in Planetfall

There are three map overview lenses that filter information on the world map for a particular area of the game: military, economy and operations. Then there are tabs that lists assets such cities, armies and heroes, we have taken a look at some of them in previous diaries. They are relevant here as they can be combined with the overview maps to make your empire management life easier. 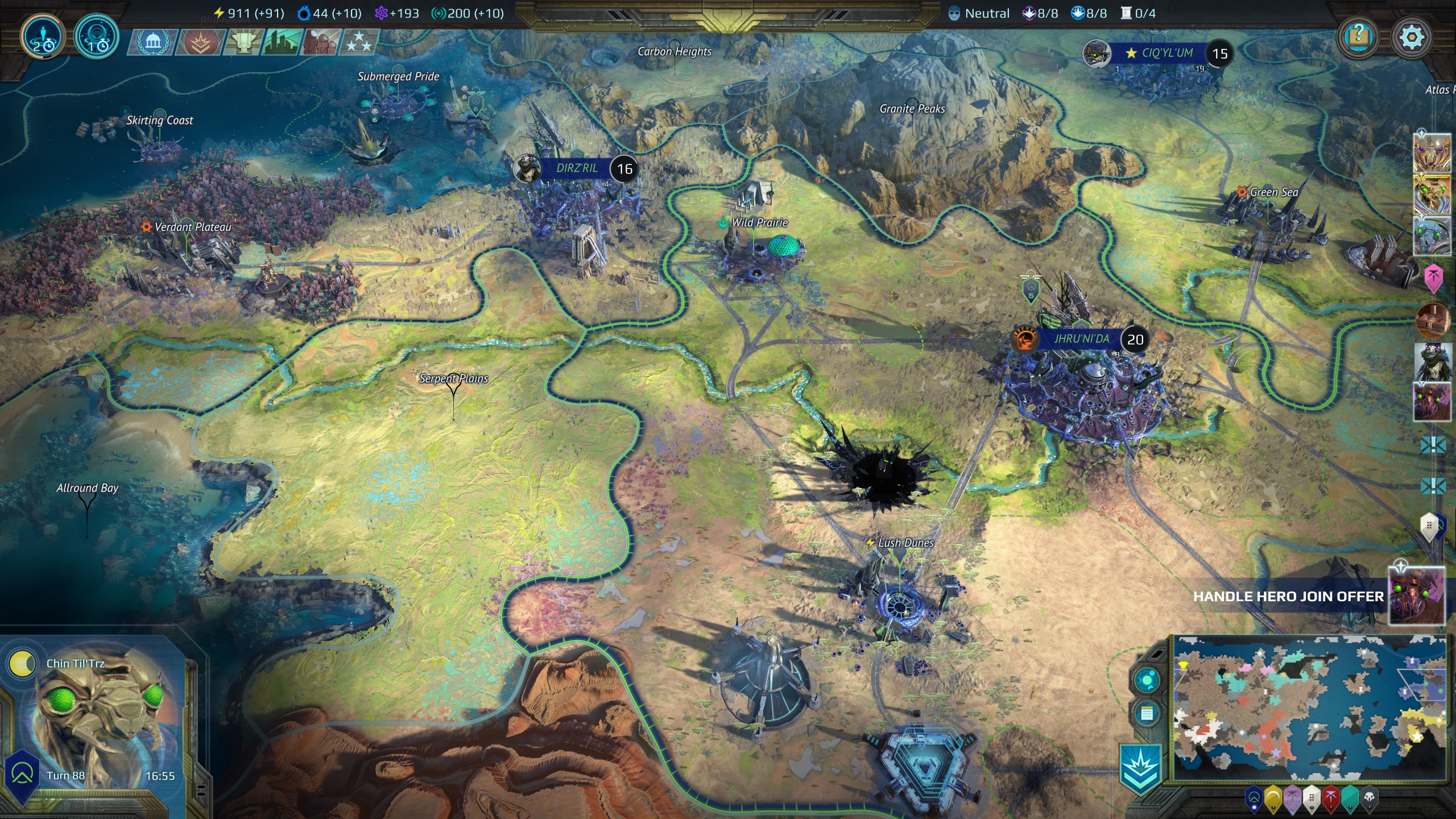 The World Map, zooming out much further will transition to the overview map​
1. Military Lens

When zooming out from the map the military lens is the default view. It shows abstracts the map and brings forward your armies and clearly marks threats such as marauders as you’d expect from a war room view. Threats have animated particles.

Other icons included are Colonies and Landmarks, Hazards, and Quest Targets.

This view can be combined with the Army Overview Tab, so you can quickly find armies and plan large assaults and defensive moves. 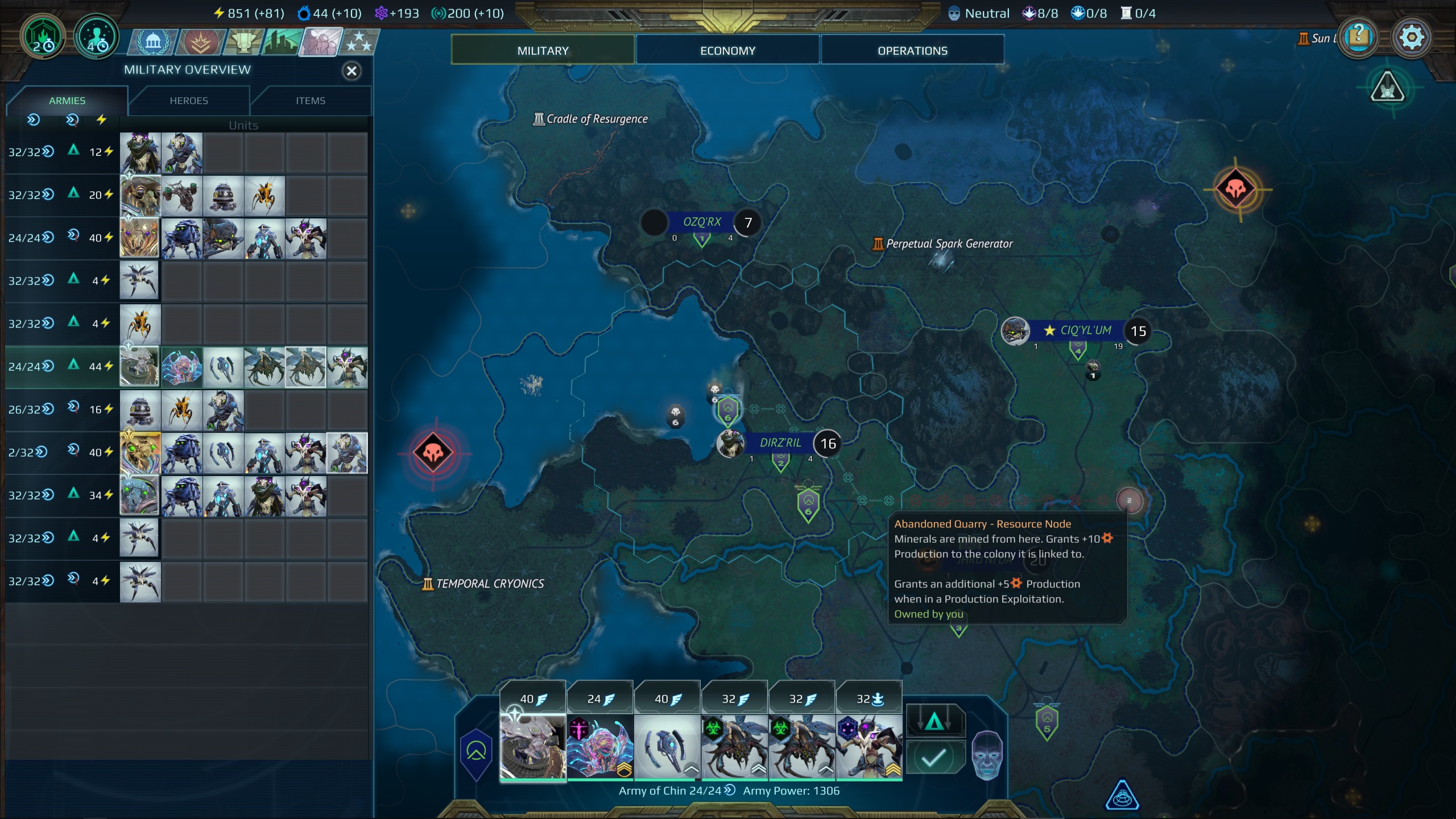 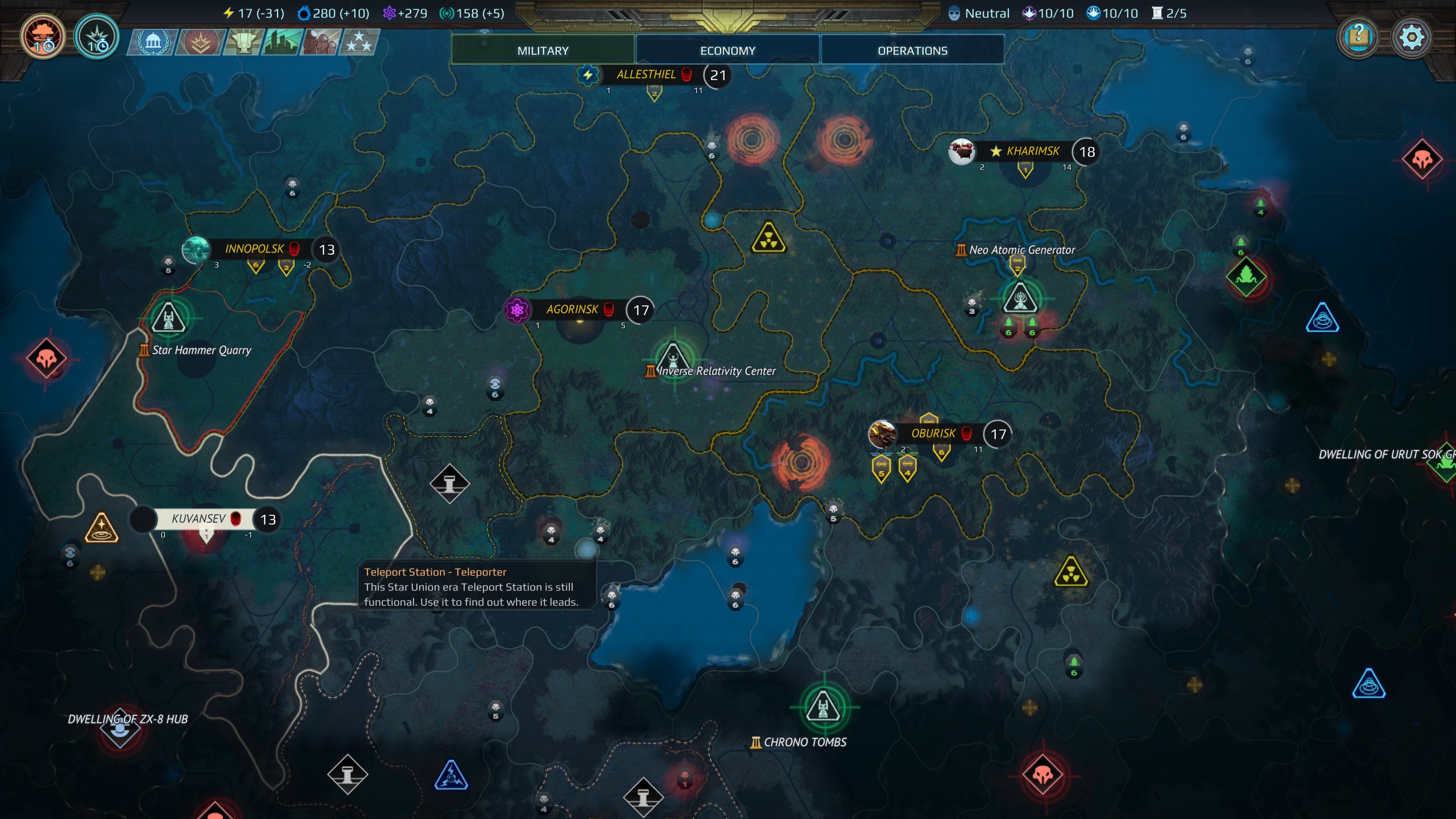 Military Lens from another save, the standout red fire FX are Promethean doomsday structures. ​
2. Economic Lens

When zooming out with a colony selected the overview map defaults to the economy lens.
This map overview displays on the resource output of entities on the map; both on sector and node level. The resource potential per sectors is listed as little icons. There are large icons for Resource Nodes and hazards. Of course, tooltips give detailed information on locations.

With the Colony List open alongside, you can manage cities in relation to the bigger picture. The colony overview lists if colonies can annex more provinces (indicated with a little + sign) Using the economic overview map, you can easily find a new spot to annex or find sectors to transfer. 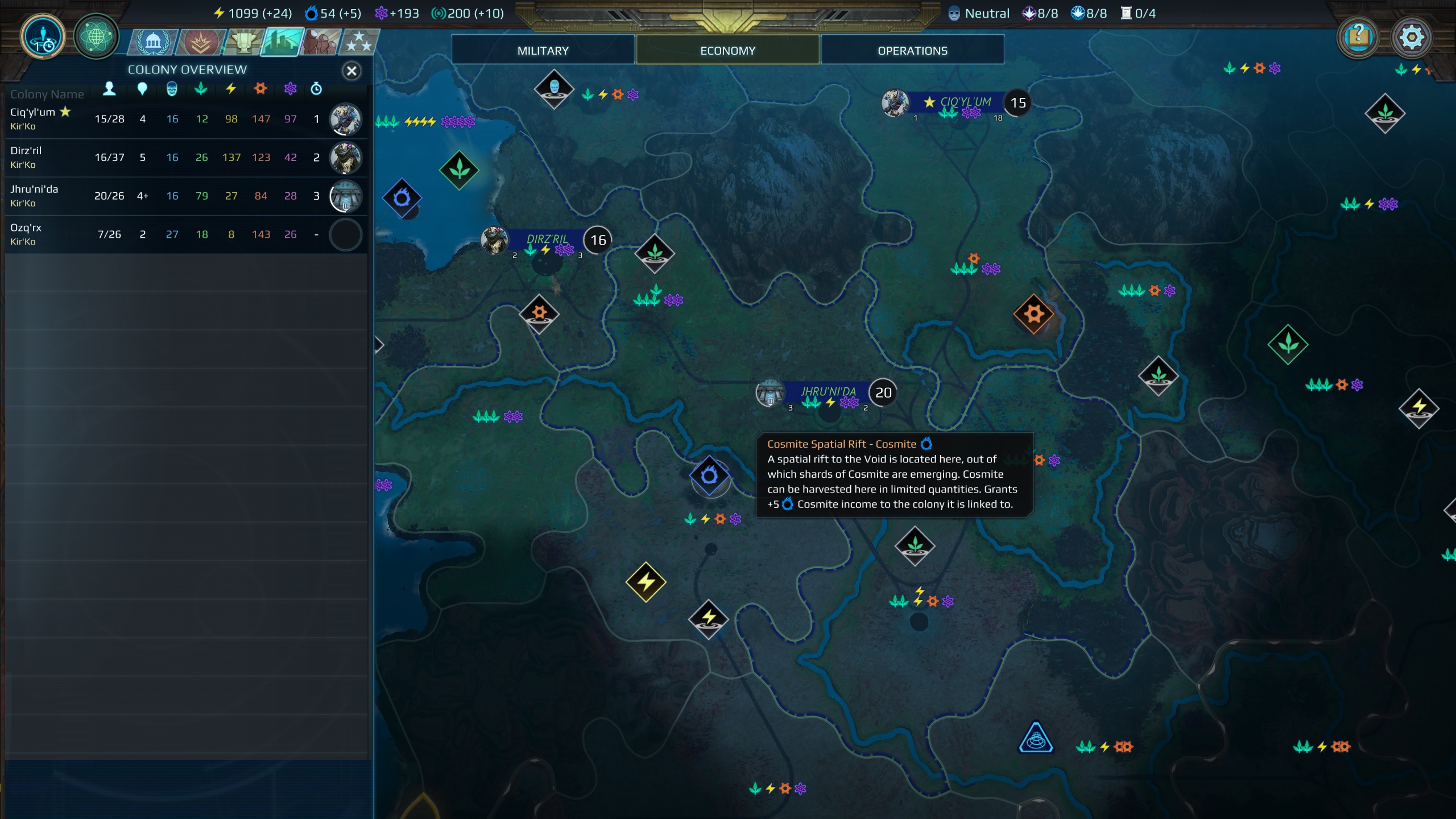 Economy Lens with Colony List: Find another province to annex for one colony. ​
3. Operations Lens

This map gives information on ops. It lists the operational defense per colony, as well as currently active ops per sector.

Of course the lens can be combined with the regular Operations interface.

On a side note - You might notice a new thing there: Alert Level. Whenever you detect another player using an Operation against you, your Alert Level will rise one level. Each level gives 2 Operation Defense against enemy Operations, and expires after 5 turns. The alert level cannot exceed 5. This is to avoid people (or AIs) spamming ops. 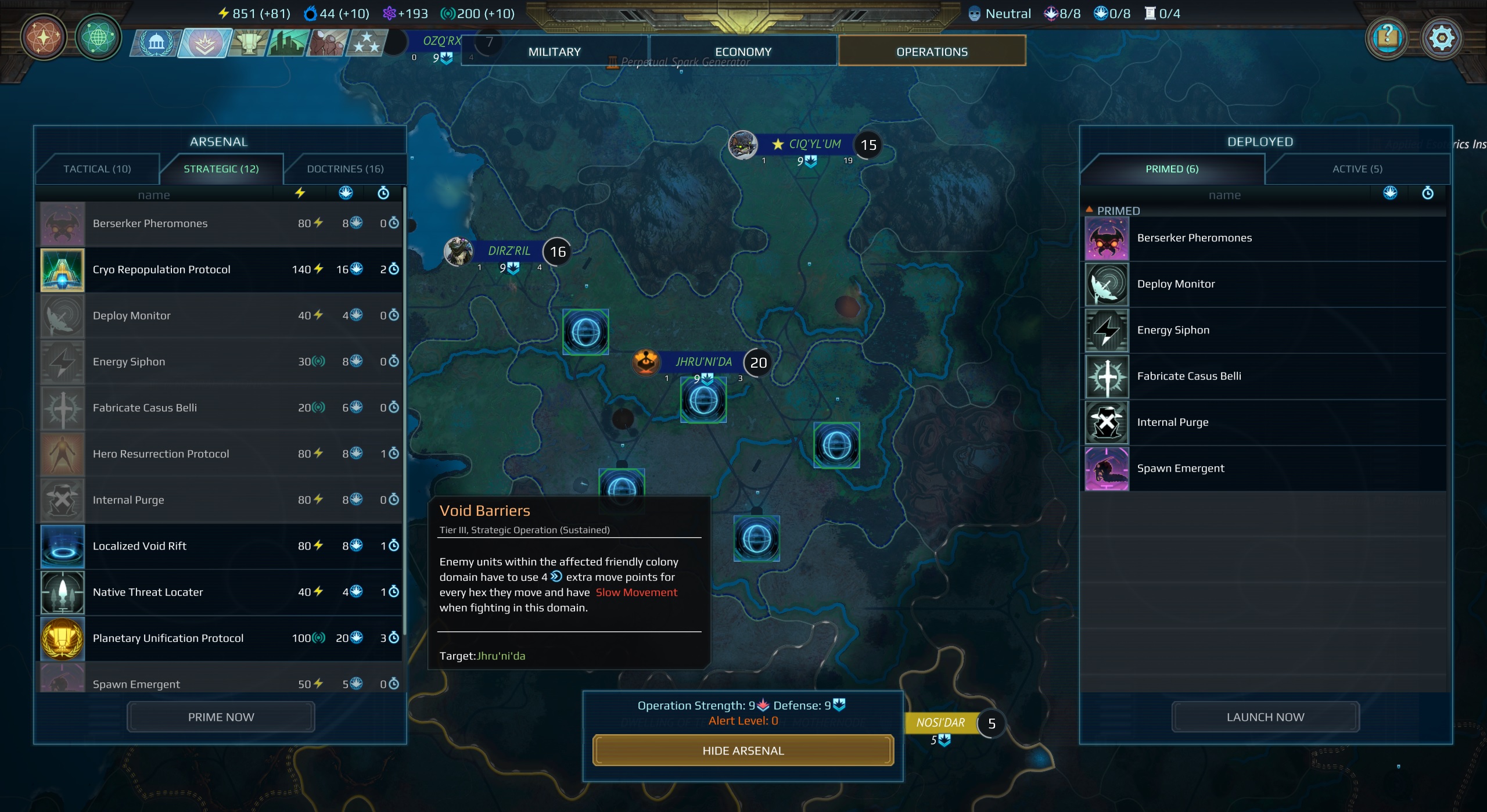 So much "stuff" on there.

Will it be possible to issue commands via the overview map? Move armies, target settlements with operations, stuff like that?
Last edited: Apr 4, 2019

Looks good and useful to combine the map with the related overview tab.

I was only wondering what do sectors colors mean (darkgreen and black). Does it relate to the sector-type is some way?


LennartGS said:
The Age of Wonders 3 parchment map was charming, but these Planetfall maps are a lot more useful and clearer in practice.
Click to expand...

Yes, parchment maps were cool. Maybe someone can mod it for Planetfall

I loved the look of the strategic map in AoW3 but it was a bit lacking in function and I barely used it for most of my games. This seems like a huge improvement! One of my peeves in 3 was that you couldn't track city ownership and borders around the world if you didn't have line of sight. You could only see on the edge of your own borders, and around any armies you have roaming. After the early game a dedicated scouting group would have an incredibly short lifespan! I felt that you couldn't scout everywhere at all times and missed out on a lot of what was going on in the world. If the orcs are conquering the halflings, and the dwarfs are in a pitched war with the elves, I like a basic sense of how things are developing! It adds intrigue for the player, even if you haven't strictly seen these things happen yourself. To me it represents something more like hearing rumours or news from overseas. Do you get any indication that regions are changing hands in Planetfall if you are not currently scouting that area?

Looks great. Will see when get to play if it has the important stuff you want to see.

Many games have this type system. AoW3 had also? But many times it's just too slow for the amount of information.

Btw can you sort all the lists? Drove crazy in civ when could not sort by the amount.

nvc for the soul said:
Yes, parchment maps were cool. Maybe someone can mod it for Planetfall
Click to expand...

Cool, but maybe, just maybe, a little anachronistic for the setting.

Maybe a silly expectation, but is there any chance to add some buttons for "favorite" army or cities? If any of you remember old-school strategy Warlord Battlecry 3, had this option.
In AoW3, usually playing extra large maps, I was finding sometime difficult to find my favorite armies or city with specific benefits for my units w/o been needed a lot of scrooling/clicks.
Last edited: Apr 5, 2019

Jywert said:
Btw can you sort all the lists? Drove crazy in civ when could not sort by the amount.
Click to expand...

You can click on the column headers of city lists for example to sort by that value.


MisterBenn said:
Do you get any indication that regions are changing hands in Planetfall if you are not currently scouting that area?
Click to expand...

That sounds like exactly what I was hoping for, thanks.

The ability to overlay the army list onto the military lense is awesome. It is so annoying when your army list is on a different overlay from your map. I need to know where my units are relative to other armies, and to do that you need the map! Way to include them on one screen!

Still not sure about this game.
Expand signature
"It is not the critic who counts; not the man who points out how the strong man stumbles, or where the doer of deeds could have done them better. The credit belongs to the man who is actually in the arena, whose face is marred by dust and sweat and blood; who strives valiantly; who errs, who comes short again and again, because there is no effort without error and shortcoming; but who does actually strive to do the deeds; who knows great enthusiasms, the great devotions; who spends himself in a worthy cause; who at the best knows in the end the triumph of high achievement, and who at the worst, if he fails, at least fails while daring greatly, so that his place shall never be with those cold and timid souls who neither know victory nor defeat." ~ Theodore Roosevelt, 1910

Love the Map Lenses. I think this is one of the best innovations in the strategy genre of the last few years. Makes maps a lot more readable and you're able to put more layers into games since the information is now at the users fingertips.
Expand signature
Gamers are young at heart and creative thinkers. Shall we play a game?

Lord Hoosier said:
Still not sure about this game.
Click to expand...

What's your reservation about the game?