Hi there, time for this week’s Planetfall development journal. You can easily get the wrong impression from their name and odd requests, but these creatures are proper eldritch horrors if you manage to upset them. Time to look at a new NPC Faction: The Psi-Fish.

The Psi fish were encountered as the Star Union expanded its hyperspace network. A new age of space travel dawned when scientists discovered a way to artificially create spatial rifts. Launching sub- FTL ships carrying massive Gravity-Bombs, G-Bombs for short, additional rifts were opened in systems with resource rich worlds. Once connected to the Nexus, these bridgeheads led to the discovery of further natural rifts and the Union’s extension started to explode as new areas of space were discovered and chartered each day. During that time, first contact was made with a sentient alien life form, a race called the Kir’ko, which the Union eventually subjugated, and the first sightings of the otherworldly Psi-fish were recorded in deep space. After the collapse of the Star Union, Psi-fish sightings became more frequent on surviving planets. They’ve been the bane of many colonies, and often like to hang out on Cosmite Nodes. 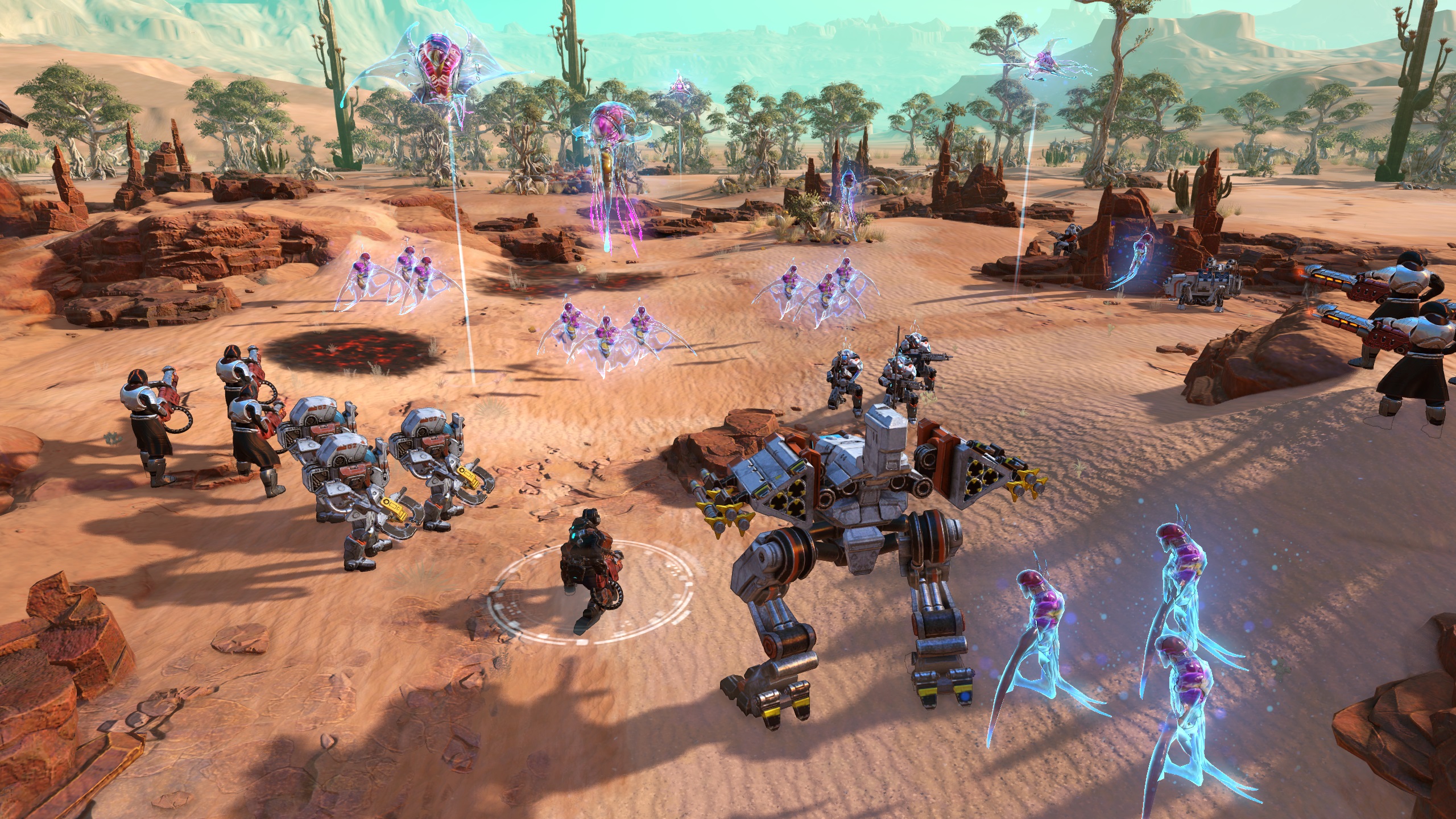 The Psi-Fish are a highly intelligent species with an otherworldly mindset and a strong instinctual drive to propagate and evolve. Their psionic power manifests naturally for them through their connection to the Void. 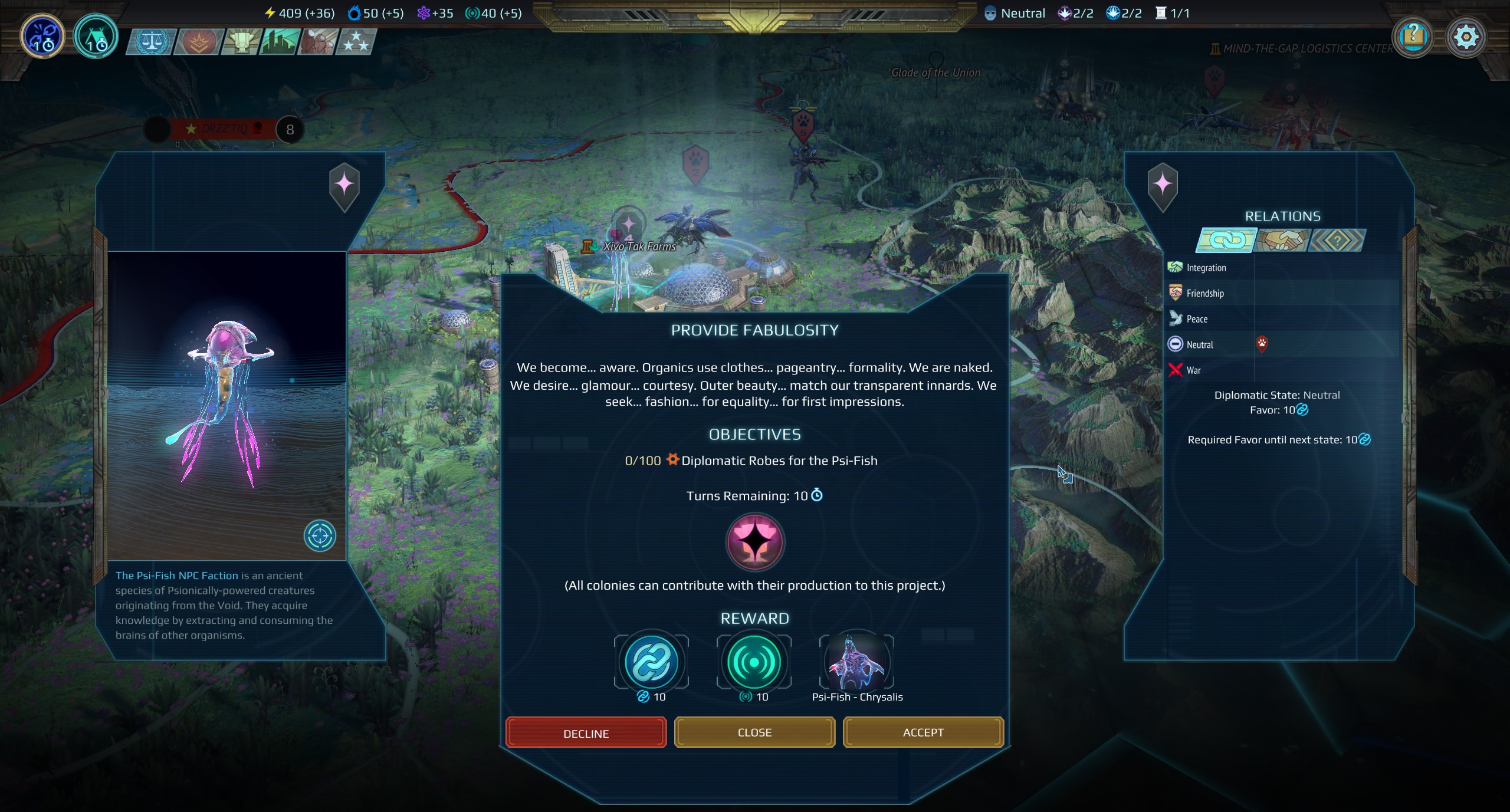 The Psi-Fish Host is a daunting sight as it moves across the world. They levitate gracefully through the air (or vacuum) with a threatening calm. Their psionic power radiates off of them in waves, felt even by those not psionically gifted.

Their evolution is unique: Each step of their evolution process, from the seedling Chrysalis to the imposing Medusa, fulfils a different function in the Psi-Fish shoal. Together they act as a singular force, capturing their prey and using them to nurture their offspring as they grow ever stronger. 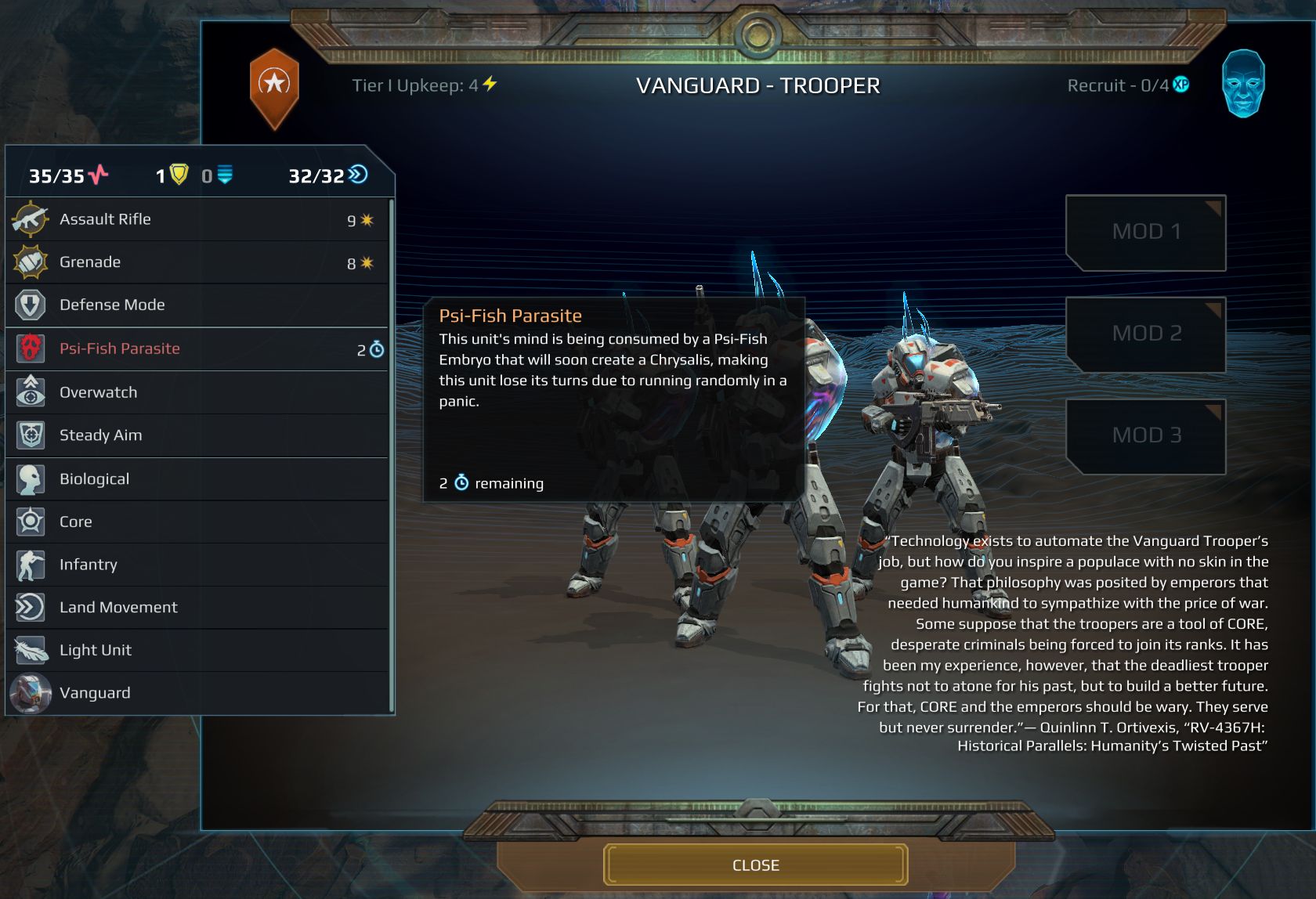 The effect on their targets is proper sci-fi horror material. But the Psi-fish are not evil, they are curious, intelligent creatures who can be negotiated with. Their horrific acts are generally the result of the many misunderstandings associated with inter-dimensional contact. Use diplomacy and convince them you’re not fish-food.

Psi-fish have the ability to Bond with other creatures with the strength and effect type depending on the particular Psi-fish unit. The effect is always positive Psi-fish, while the effect for the target, can uhmm… vary. The casting creature can once per turn, to change the target of its Bond. If the Psi-fish is staggered, the Bond is cancelled.

The effect can be positive or negative for the receiving creature. The other side cannot do anything about being Bound, save staggering or using anti-status effect abilities. As some form of relief, a unit cannot be the target of multiple Psi-fish Bonds at the same time. 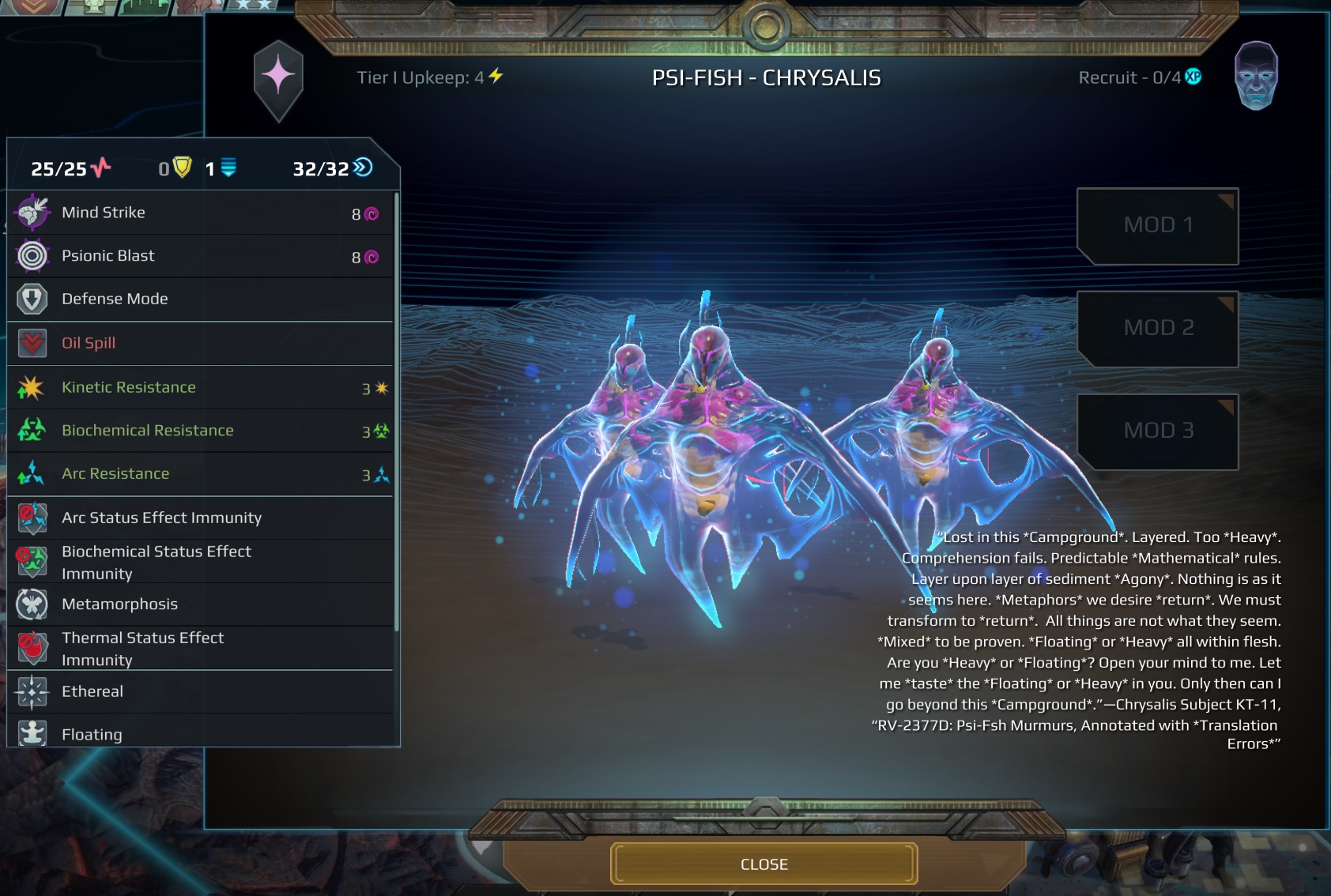 Spawn: The Spawn is the infant form of the Psi-fish. Burst forth from a Chrysalis when it has grown, it floats across the world in swarms surrounding the more mature Psi-fish creatures. They have medium ranged mental attacks that it uses to take out their prey’s mind, rending them vulnerable. Their Fascinating Bond ability blocks enemies from performing actions except move. 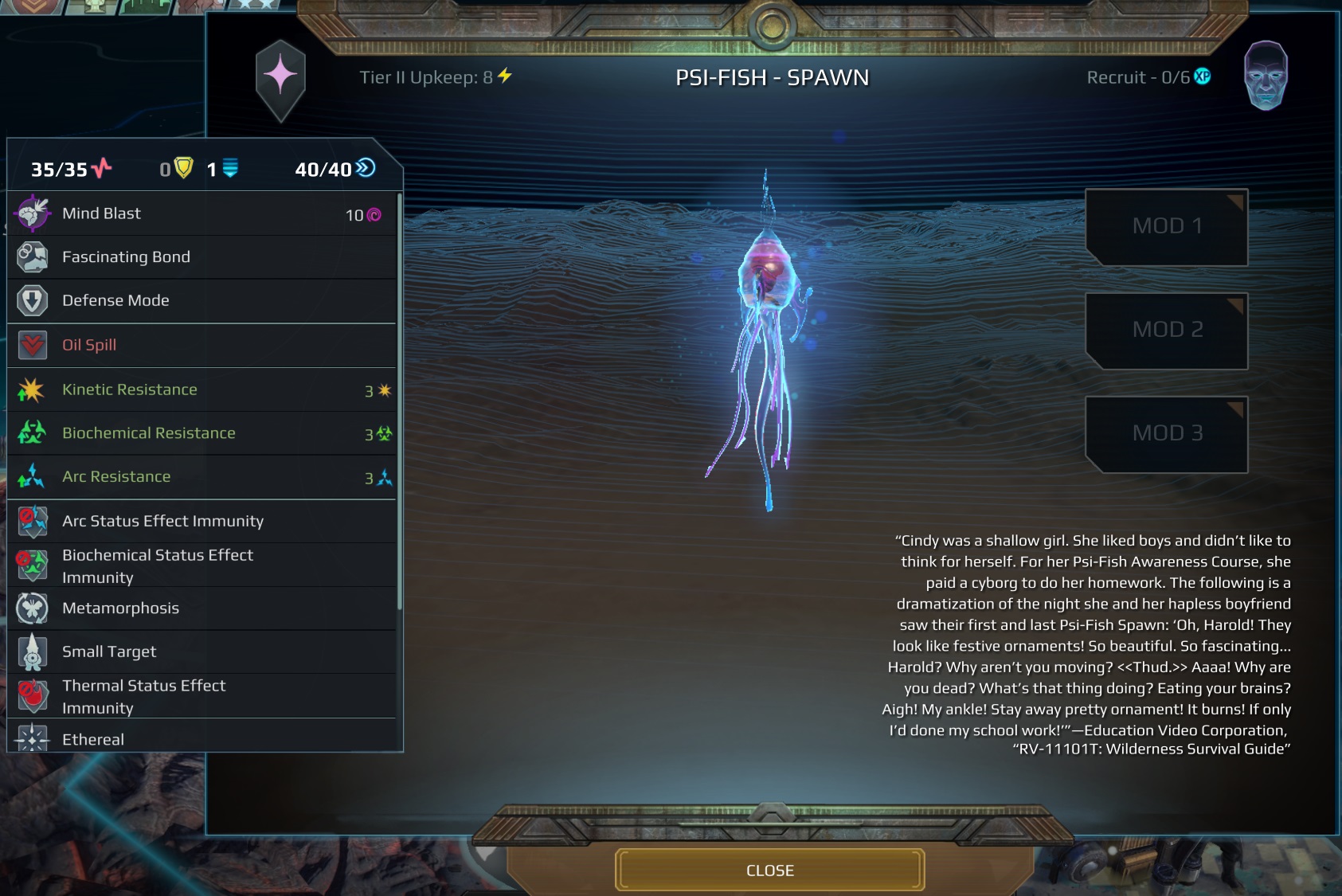 Hunter: This creature is a nightmare. Considered the most powerful Tier II unit in the game. The Hunter is a fast moving, agile creature that shoots through the air, homing in on its prey. It is capable of linking its mind with its prey, stunning it before moving in for the kill. The Hunter can evolve into a Siren. 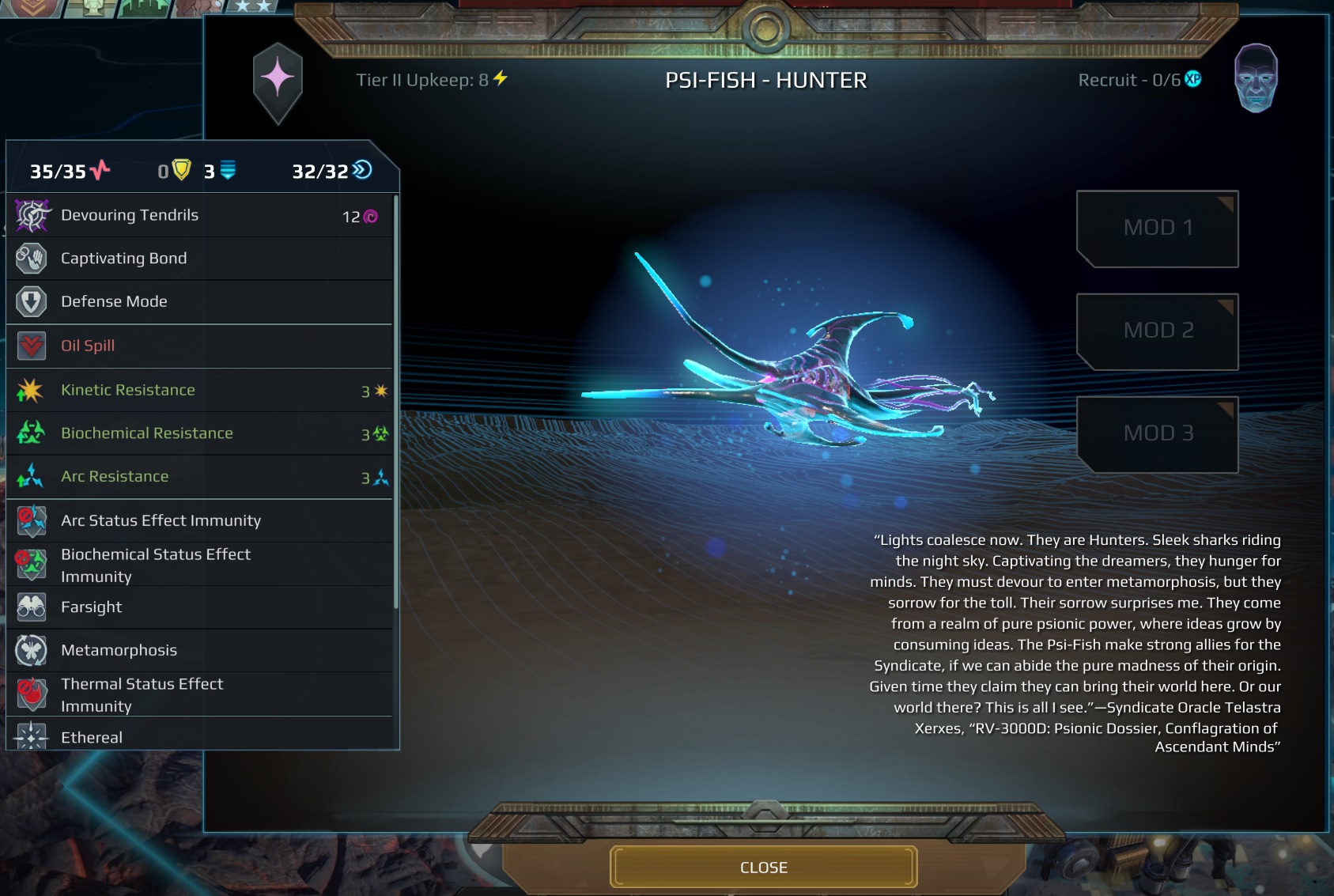 Siren These are unsettling presences to behold as they fly through the air. The Siren has an enticing call, which it uses to lure its enemies closer before implanting them with one of its eggs. When it attached its mind to another creature, that creature knows its end is nearby. 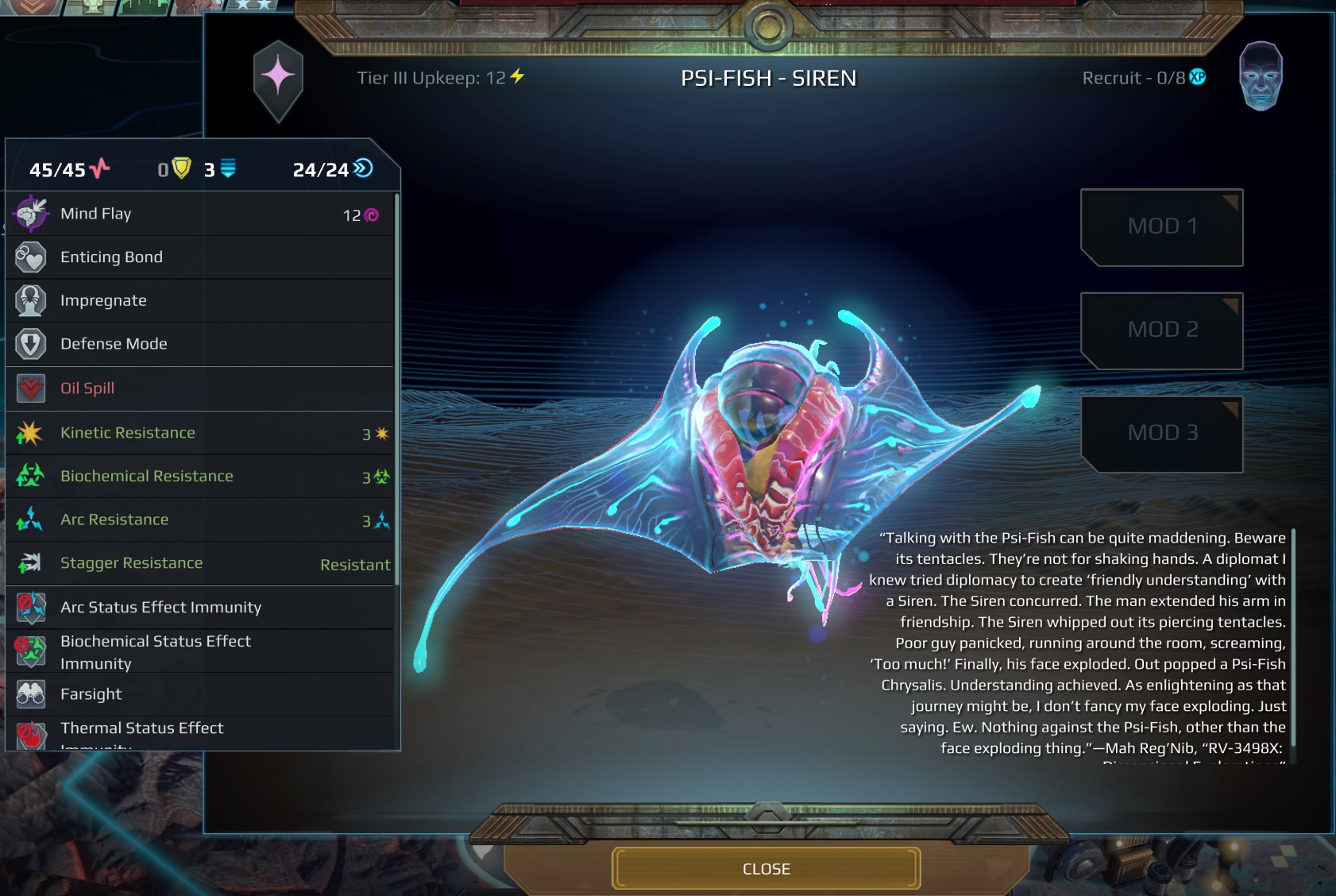 Medusa: The Medusa is a huge and awe-inspiring sight. The vast amount of Psionic power needed to keep it floating radiate off of it in waves. To look at it directly is to look into the face of Insanity. It changes it temperament at an instant, able to soothe its allies at one moment, and to unless massive Psionic power to its foes the next. 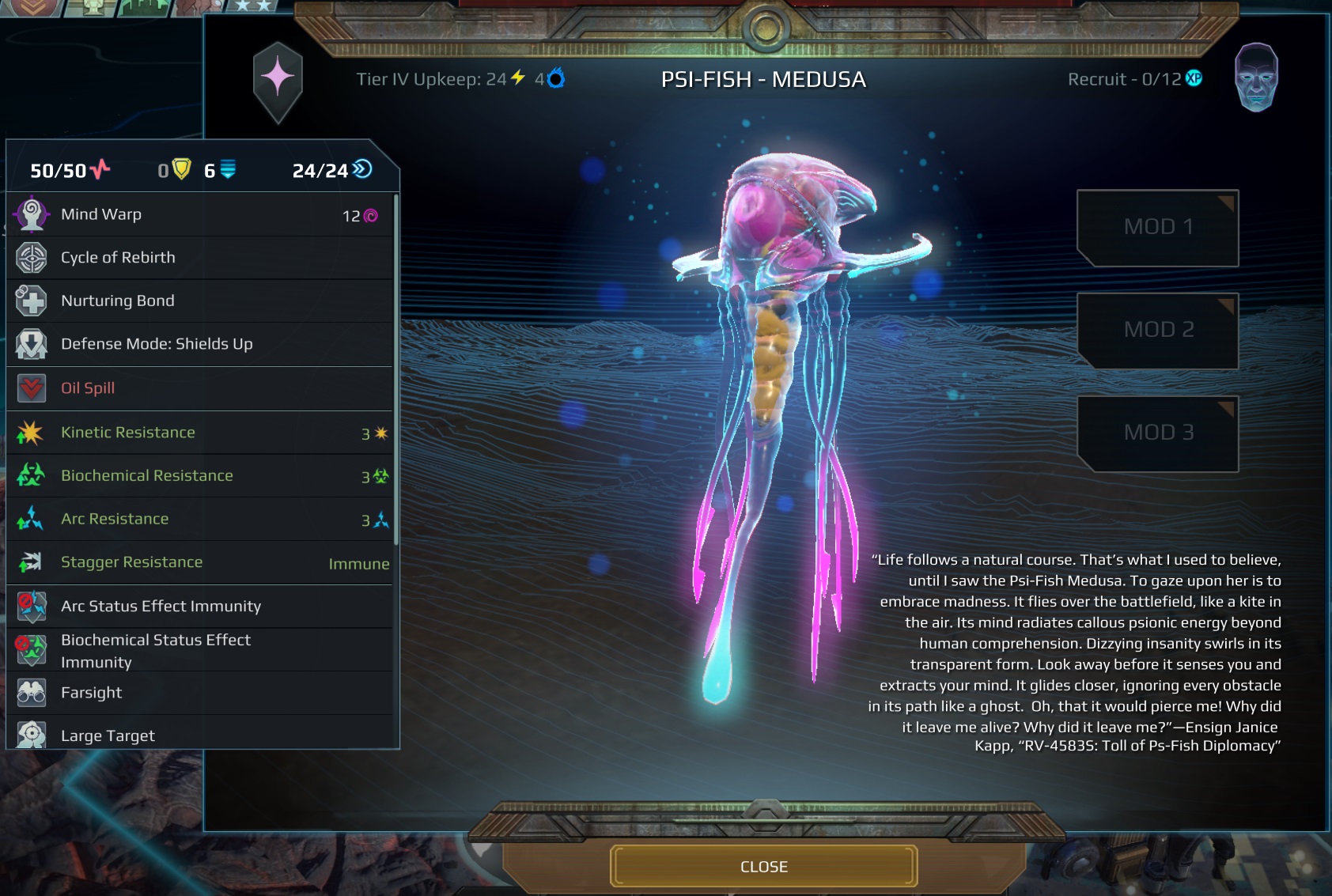 Psi-fish are otherworldly fish, living in an upside-down waterfall. Their dwellings are always located at sea. Maybe this environment is resembling their home most. 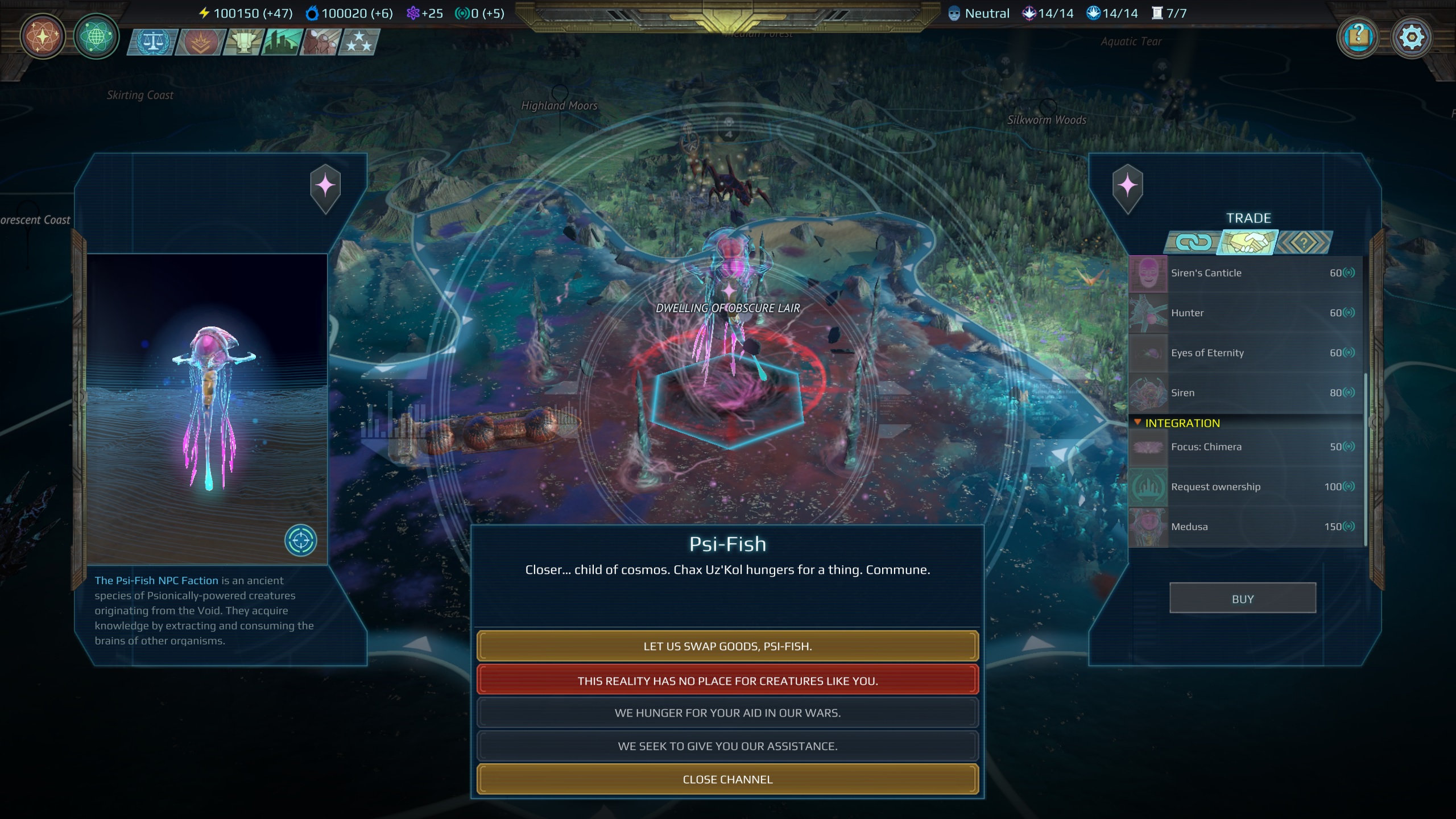 Their units float across to land just as easily. So if you pick a fight with them, you’d better have a navy, ideally a psionically protected navy, that can damage ethereal beings. Good luck!

Some of things you can acquire at their dwelling:

They're so colourful! I love them

I think these will be my favourite NPC's, can't wait to impregnate the filthy flesh bags of the world and spread purple supremacy

I was really hoping "Psi-fish" was just what the Star Union referred to them as but they had a proper, actual name. That would be like if humans referred to themselves as Meat Bags.

I'm always happy to see the scifi setting pulled a bit towards the fantasy side of the spectrum, so +1 to the Psi-fish!


BleedTheFreak said:
I was really hoping "Psi-fish" was just what the Star Union referred to them as but they had a proper, actual name. That would be like if humans referred to themselves as Meat Bags.
Click to expand...

Well, we are looking at the universe through the eyes of old Star Union inhabitants and the Psi-fish are unlikely to use natural language at all (them almost certainly being telepaths), so I'm pretty sure this is what the Star Union/ordinary folk use as a name for them, definitely not what they have named themselves.
B

Mix of Illithids and Aliens.

How about you also make them look like a spiders.. and make them fly.

Lovely, they look beautiful!
I really like the concept of a constantly evolving race. Bringing up Chrysalis all the way up to a Medusa will be a rewarding and bonding venture.
Expand signature
Age of Wonders 3: Age of Tamriel mod project

Expand signature
"Man is free; but his freedom does not look like the glorious liberty of the Enlightenment; it is no longer the gift of God. Once again, man stands alone in the universe, responsible for his condition, likely to remain in a lowly state, but free to reach above the stars.."
-Jean-Paul Sartre

BleedTheFreak said:
I was really hoping "Psi-fish" was just what the Star Union referred to them as but they had a proper, actual name. That would be like if humans referred to themselves as Meat Bags.
Click to expand...

Yes, Psi-fish an exonym - it's how the forces/people of the Union named them. Real world explorers and settlers were quite crude when it came to naming animals and people unknown to them. "Sea lion" "Bushmen" etc.

Oh nice. They seem like deadly peace loving creatures. Going to war with them is very dangerous by the looks of their resistances. I wonder what the Ethereal trait does. Oh what does oil spill mean?

LennartGS said:
The Psi-fish likely have an unpronounceable name that would make your head explode.
Click to expand...

Love their funky otherwordly look but I can't help but wonder if the PSI-Fish are edible. Love sea food.

Jean-Luc said:
Love their funky otherwordly look but I can't help but wonder if the PSI-Fish are edible. Love sea food.
Click to expand...

Well, they don't seem to have thermal resistance, so at least they can be cooked...

I like the Psi-Fish, keep units alive, so they evolve later, was one of my favorite things in AoW 3.
I wonder if the Spawn evolve into a Hunter or a Siren, couldn't figure that out, but it would be strange if a T-2 unit evolve into another T-2 unit.

I think "Psi-Fish" would be better called "Psi-Jellyfish", i believed for months that they are Psionic Fish creatures, but they are in fact some sort of jellyfish.

If I had to guess, it's a placeholder for some sort of "psionic field" effect.
Expand signature
Friendship is mandatory. Violators will be hugged.
D

I assume this metamorphosis trait means that when the unit reach a certain experience level it will evolve to the next tier.
But assuming the player got a chrysalis during early/mid game, how difficult and rewarding will it be to evolve the unit up to medusa ?

I remember the evolving units in Age of Wonder 2. And I was never able to efficiently make use of them, because it was very difficult to give the kill to the low level unit while making sure it survive (but may be it was just me).

I've seen Hunter being more powerful than same tier Units, does it apply also to other tier units ? and in an exponential way ? This way if you can only recrut low tier units, and evolved units will be clearly overpowered, it will make sense to focus your gameplay toward evolving units.

LennartGS said:
They levitate gracefully through the air (or vacuum) with a threatening calm.
Click to expand...

Is that just flavor explaining their history, or are there special maps in the works set on planets without a viable atmosphere? It would be a neat idea for a truly gameplay-altering scenario...

dnafactory said:
I assume this metamorphosis trait means that when the unit reach a certain experience level it will evolve to the next tier.
But assuming the player got a chrysalis during early/mid game, how difficult and rewarding will it be to evolve the unit up to medusa ?
Click to expand...

Evolve is automatic, and linked to the unit reaching the highest XP level.

CORRECTION: Just spotted I copied some text from an out-dated design doc. The Siren can't evolve further. The Tier IV is out of bounds for this type of evolution. -updating journal, thanks for the trigger -

HTG2931 said:
Is that just flavor explaining their history, or are there special maps in the works set on planets without a viable atmosphere? It would be a neat idea for a truly gameplay-altering scenario...
Click to expand...

It would be fun but we'd have to put helmets on everybody
Expand signature
Lennart Sas
Director Planetfall, Managing Director, Co-founder @ Triumph Studios
Planetfall Development Diary List
Follow me @ Twitter