Jump to latest Follow Reply
Menu
Install the app
You are using an out of date browser. It may not display this or other websites correctly.
You should upgrade or use an alternative browser.
Age of Wonders: Planetfall 1633 Bug reports 1631 Suggestions 536 User Mods 94 AoW: Planetfall: News and Updates Archive 41 Multiplayer 54
Show only dev responses

Hi there, this week we return to the heroes of Planetfall. We take a close look at their ability to wield legendary items and pilot a large variety of vehicles and mounts.

The item system is very different from Age of Wonders due to the heroes’ ability to share stand-issues Modules with regular units, the new piloting abilities and the new weapons arsenal.

Heroes share stand-issue Modules with regular units, which get unlocked through research. Additionally the Unit-unlocks in the research tree unlock an associated hero Weapon or Vehicle nearly all of the time. For example, by researching the Amazon Tyrannodon laser dino unit, you unlock the Tyrannodon mount for your heroes as well. The Kir’ko Tormented unlocks a Psi-Shotgun for your heroes.

To access mounts and weapons of other races - including that race’ vehicles and mounts - you’ll need to add one of their colonies to your empire. Absorbing a colony unlocks the ability to research the primary units, mods and ops of that race.

When a hero dies, its standard-issue mods and vehicles get destroyed, only the legendary items survive. This is both to avoid item spam as well as avoiding many incompatible items. (psi mods are ofno use to non-spi users)

Whenever you equip a weapon you carefully need to match it to your chosen modules. Just equipping a Arc-rifle might disable cool laser mods you purchased.


Legendary Items and the Item Arsenal


Legendary Hero Items are found in the field by exploring the sites of the Star Union, or by performing quests for NPC factions. To streamline item management, we introduced the Item Arsenal. Without it, it was hard to find items that matched your hero’s specialization and mods and the interface was clunky.

First, a pickup dialog clearly shows the hero items you gained with the question you want to pick them up and send them to the arsenal or sell them. 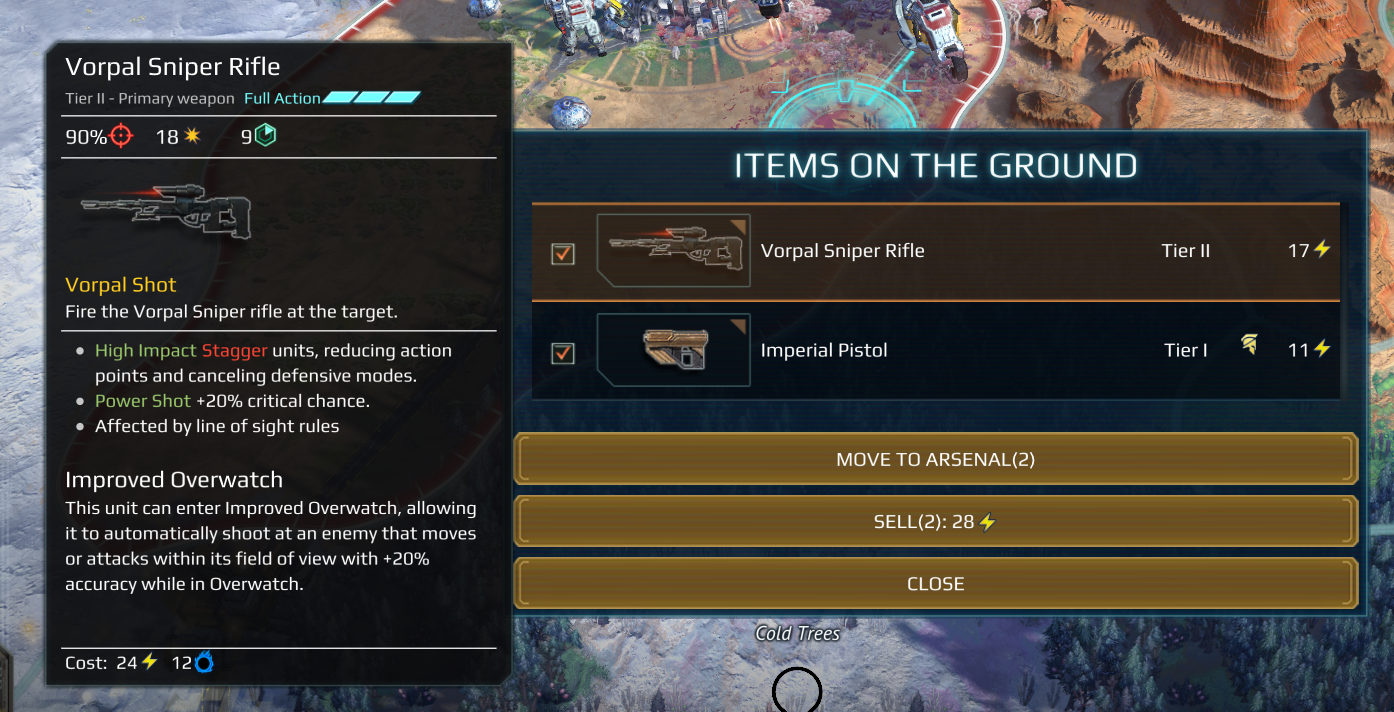 The Pick up interfac. While we were at it, we also updated the items popups to contain cleaner info. ​
Un-equipped Hero Items are now gathered in a single empire arsenal. This makes it easy for you to compare all items at your disposal and equip it to a matching hero. Item Couriering and per-hero inventories for unequipped items are no longer a thing. When something is unequipped it goes back to the arsenal. If you ever bought a standard-issue mod and no longer use it, it can be transferred to another hero via the arsenal. 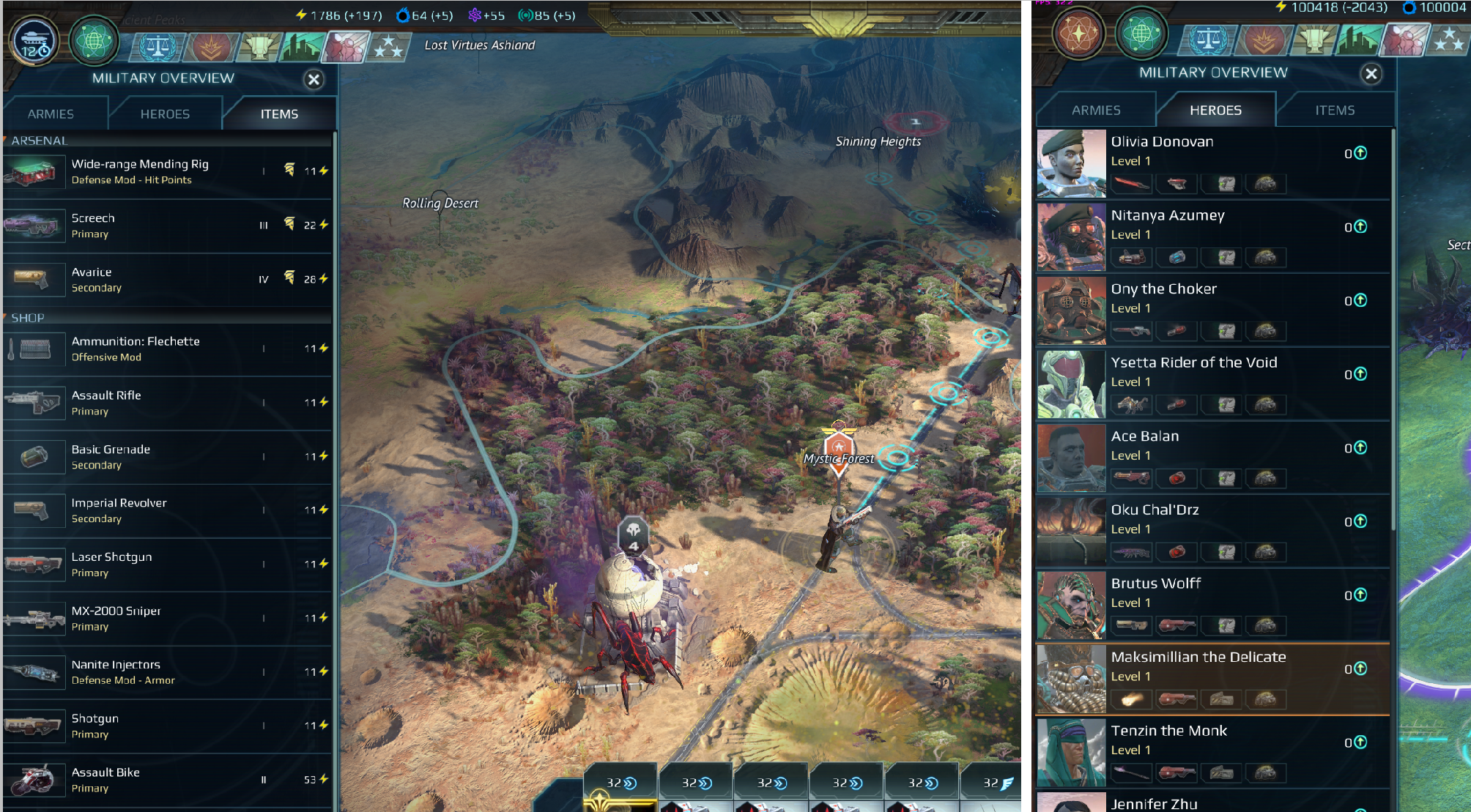 The arsenal is part of the military overview tab, where we’ve also added a handy Hero Overview. You can use this to quickly navigate to heroes and see if they have unused slots and upgrade points. (pictured on the right)​ 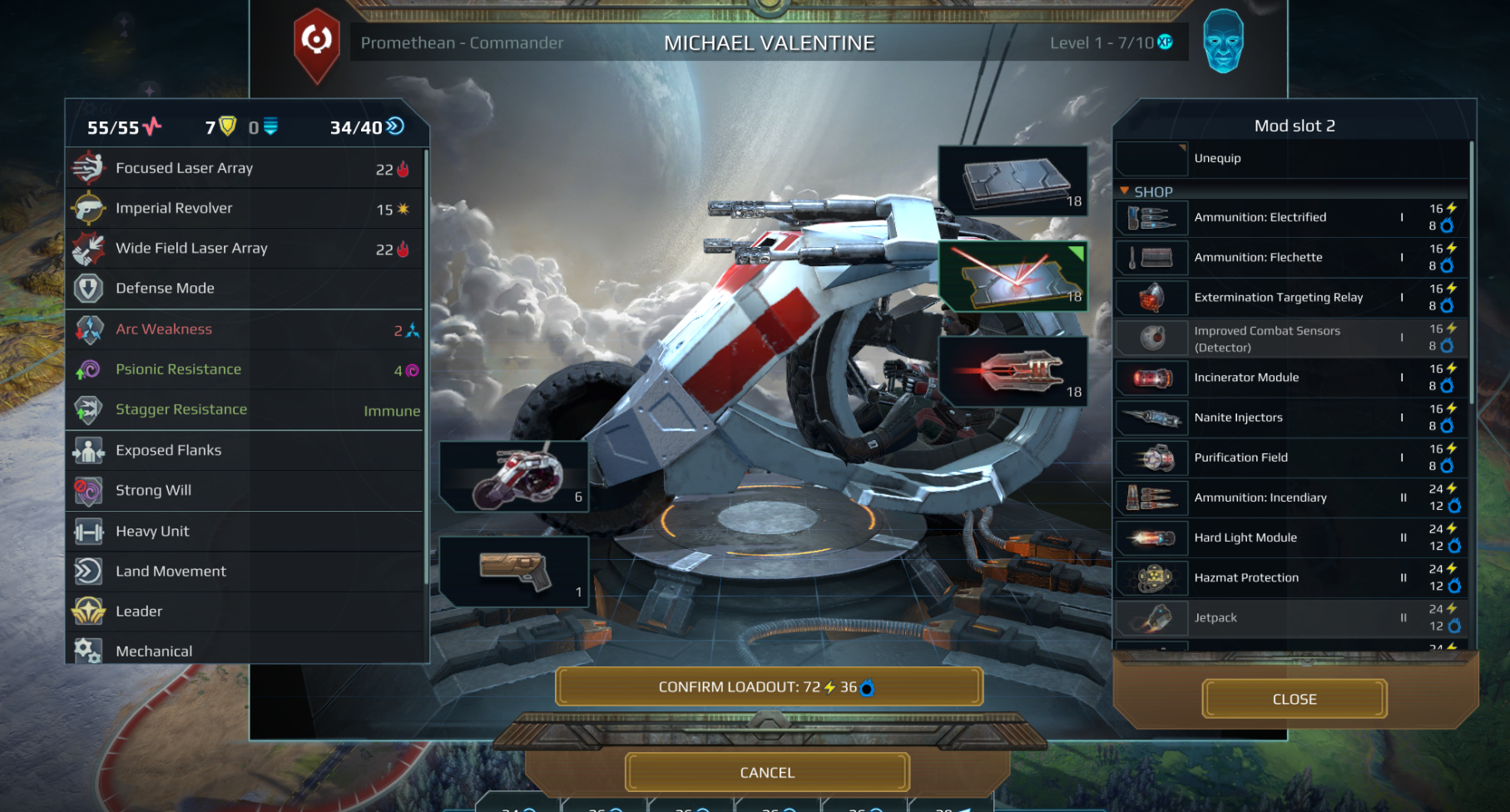 Vehicle items are equipped in the hero’s primary weapon slot replacing the main gun/attack, with the abilities coming from the vehicle. These include active abilities, unit type identifiers. Also the base-hit points, armor and shield values are replaced with those of the vehicle. Note that Vitality and Armor level upgrades do boost those the vehicle.

Vehicles and mounts come in very different forms. When you give your commander a vehicle perk at the start of the game, you have a choice of an initial assault or support vehicle. These vehicles vary per race (Assault bike and APC for Vanguard)

When a vehicle is destroyed, the hero escapes to an adjacent hex on combat map with with 20% of its original hit points. The Hero just has its secondary weapon equipped so you have to be very careful.

So even if a vehicle doesn’t guarantee an “extra life” for you hero in combat, the pilot path still seems pretty powerful. You might ask yourself why would you ever want to be outside of a vehicle. Well, most legendary drops are not vehicles - energy swords, psi guns, etc. Mods might be incompatible with vehicles. There are many hero upgrades that work for infantry or melee roles. And keep in mind that unit attributes (large target, mechanical) might expose the hero to new types of attacks. All paths of hero specialization are viable options.

We close off with the increasingly adventurous expressions of Michael Valentine, thanks Glenn for the screen caps: 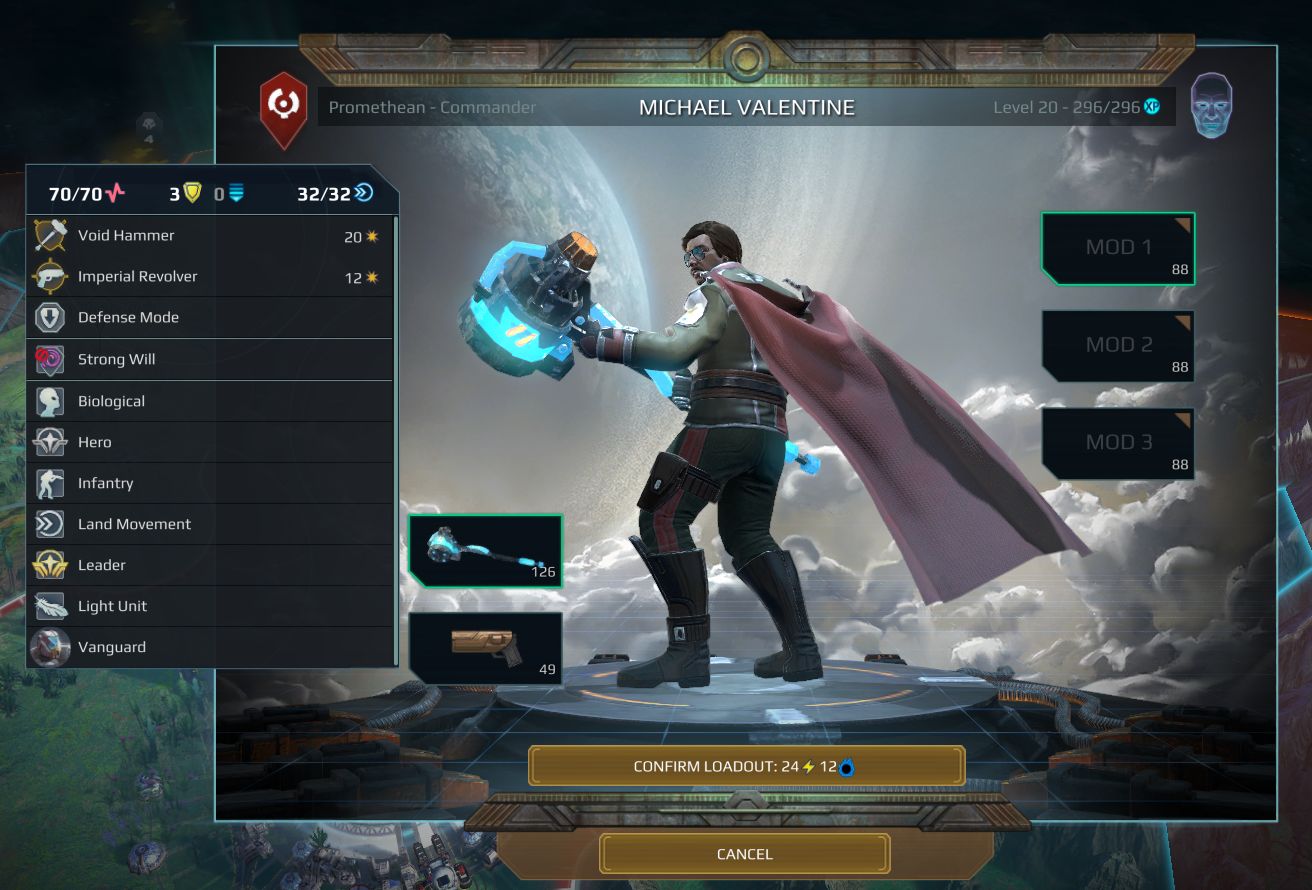 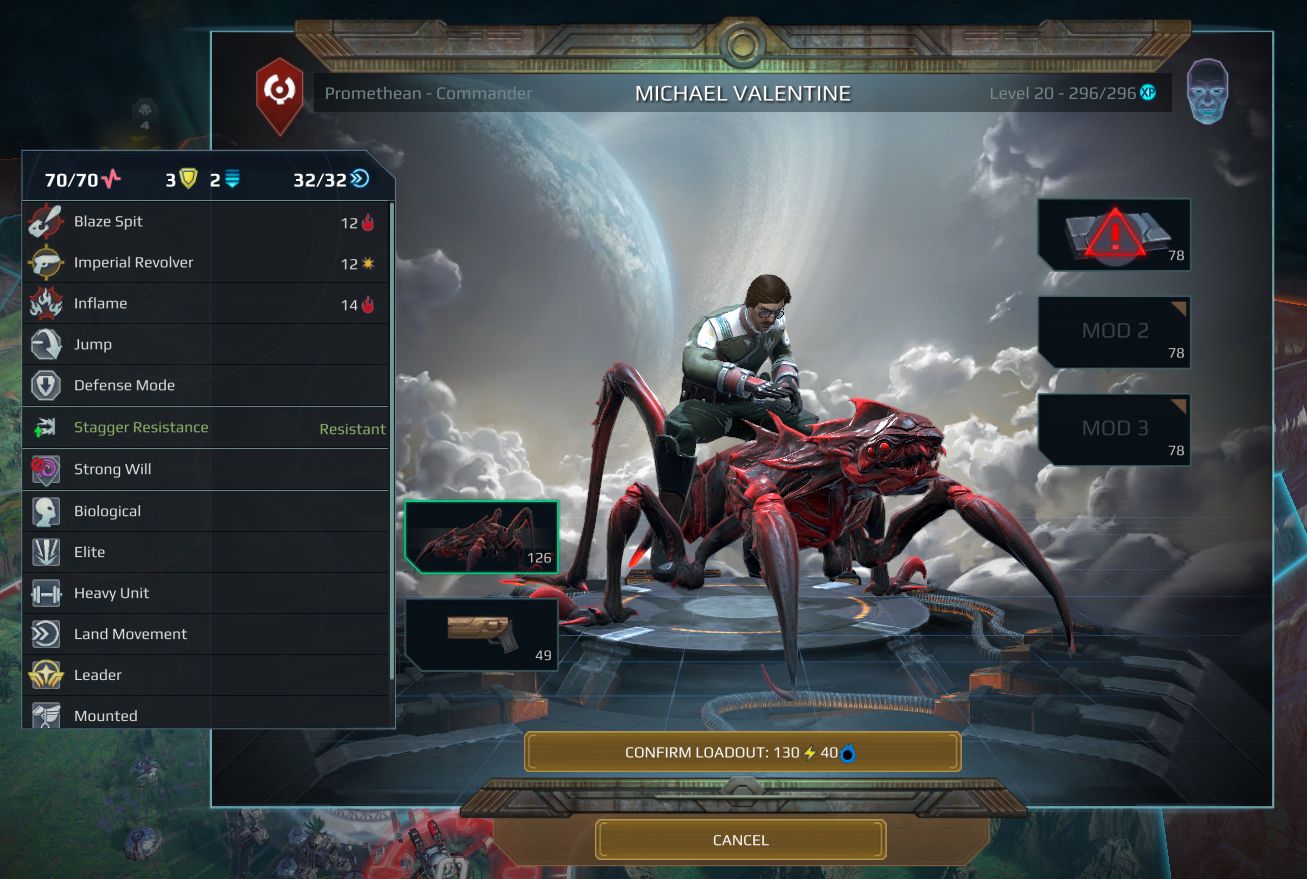 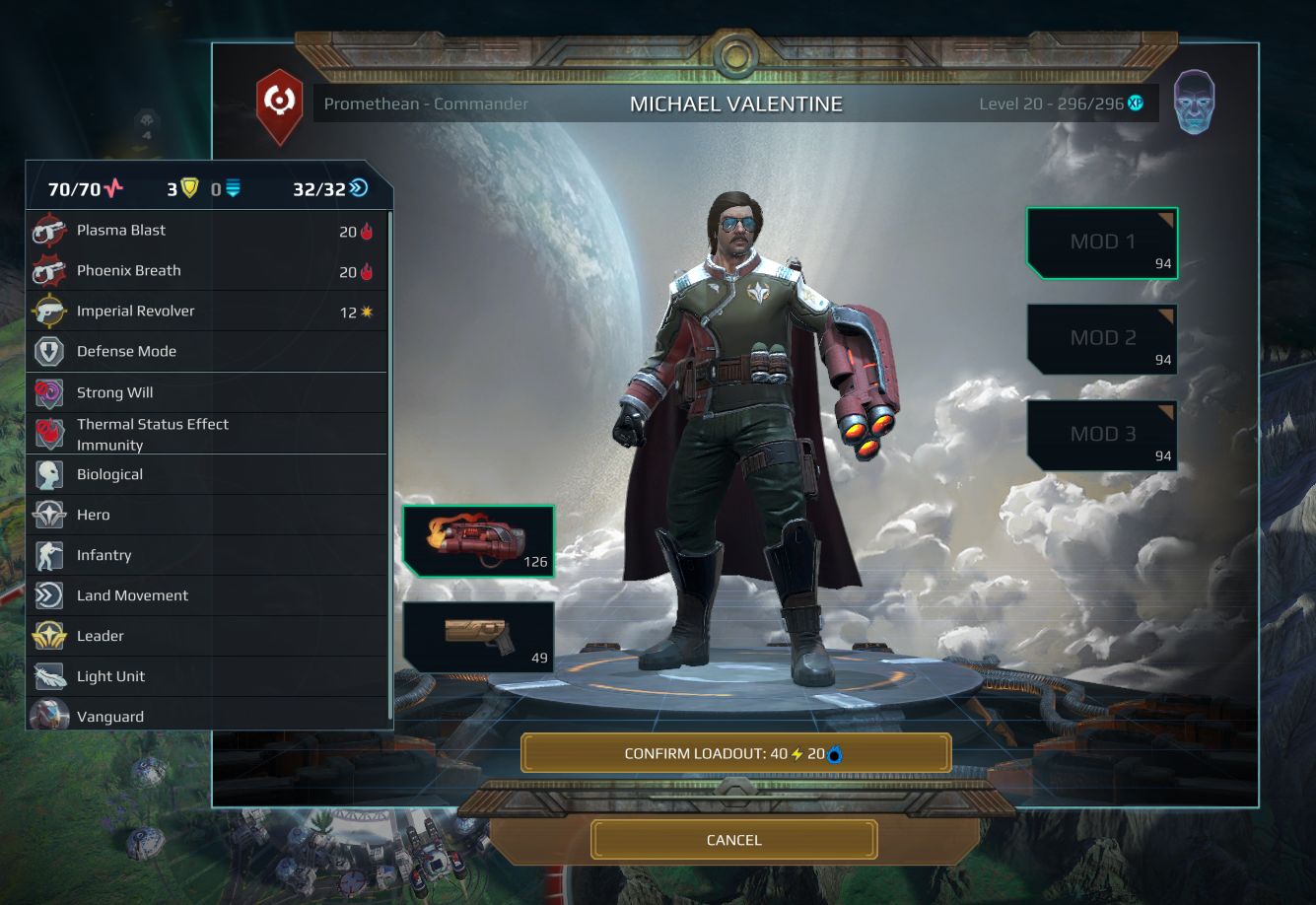 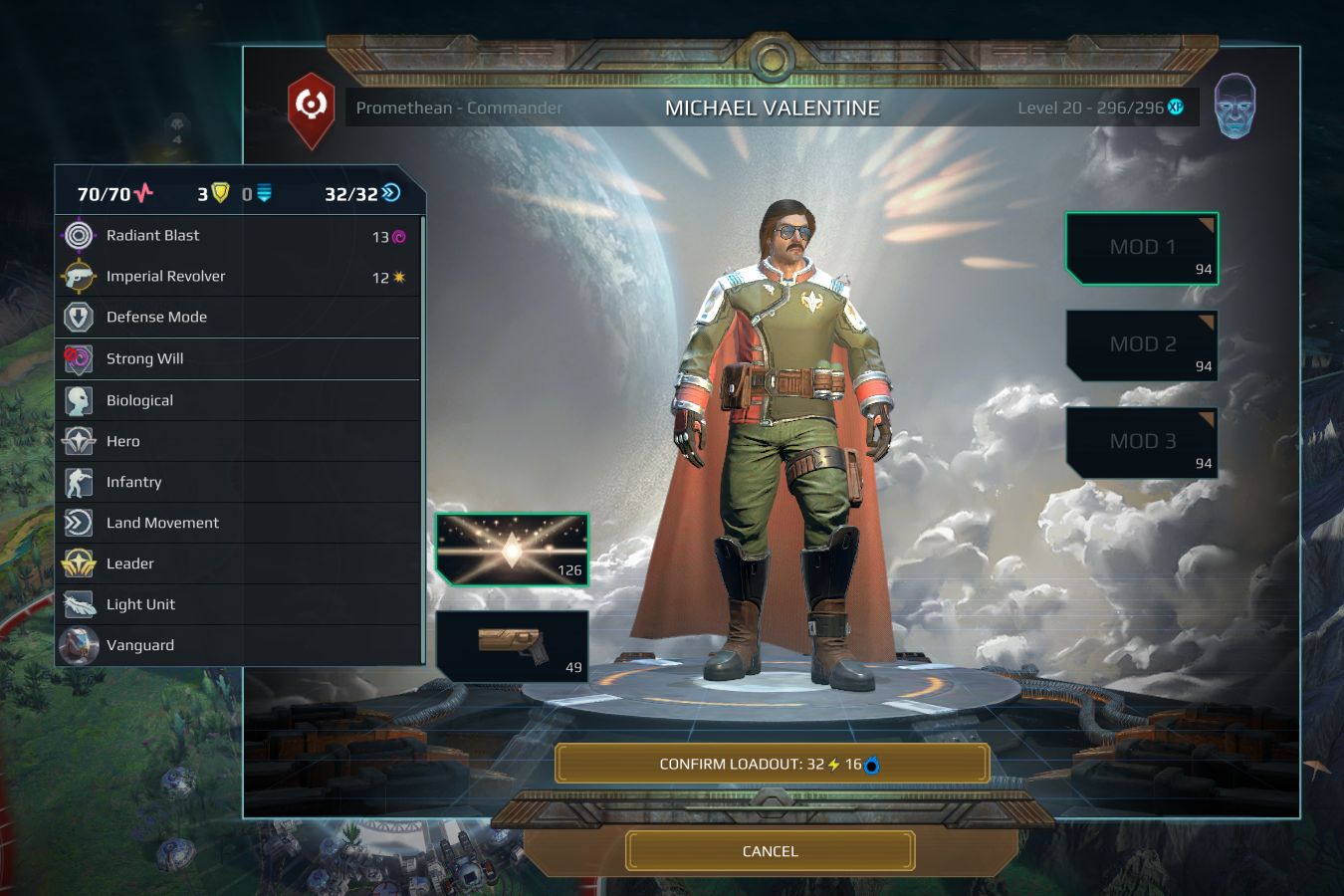 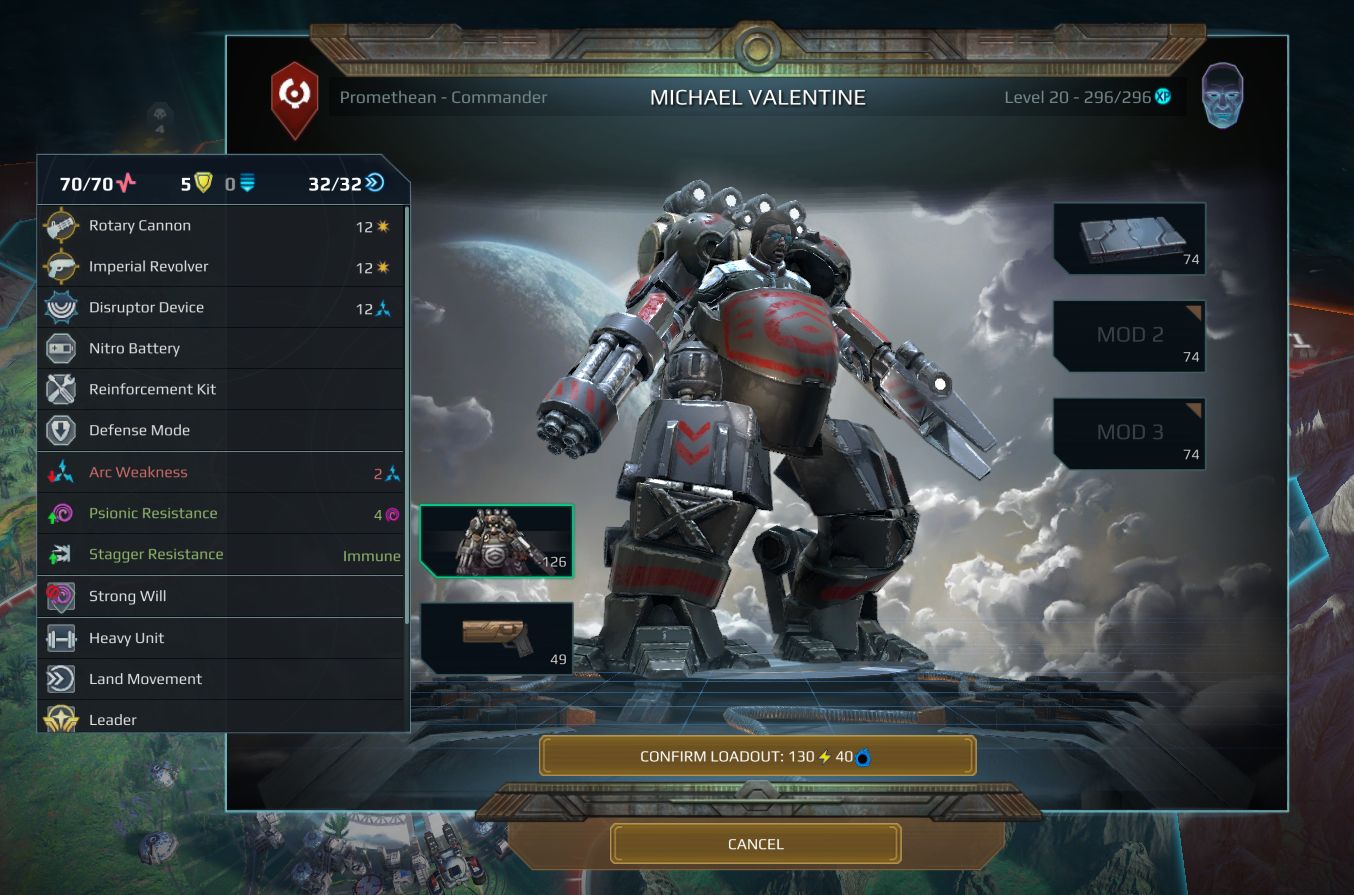 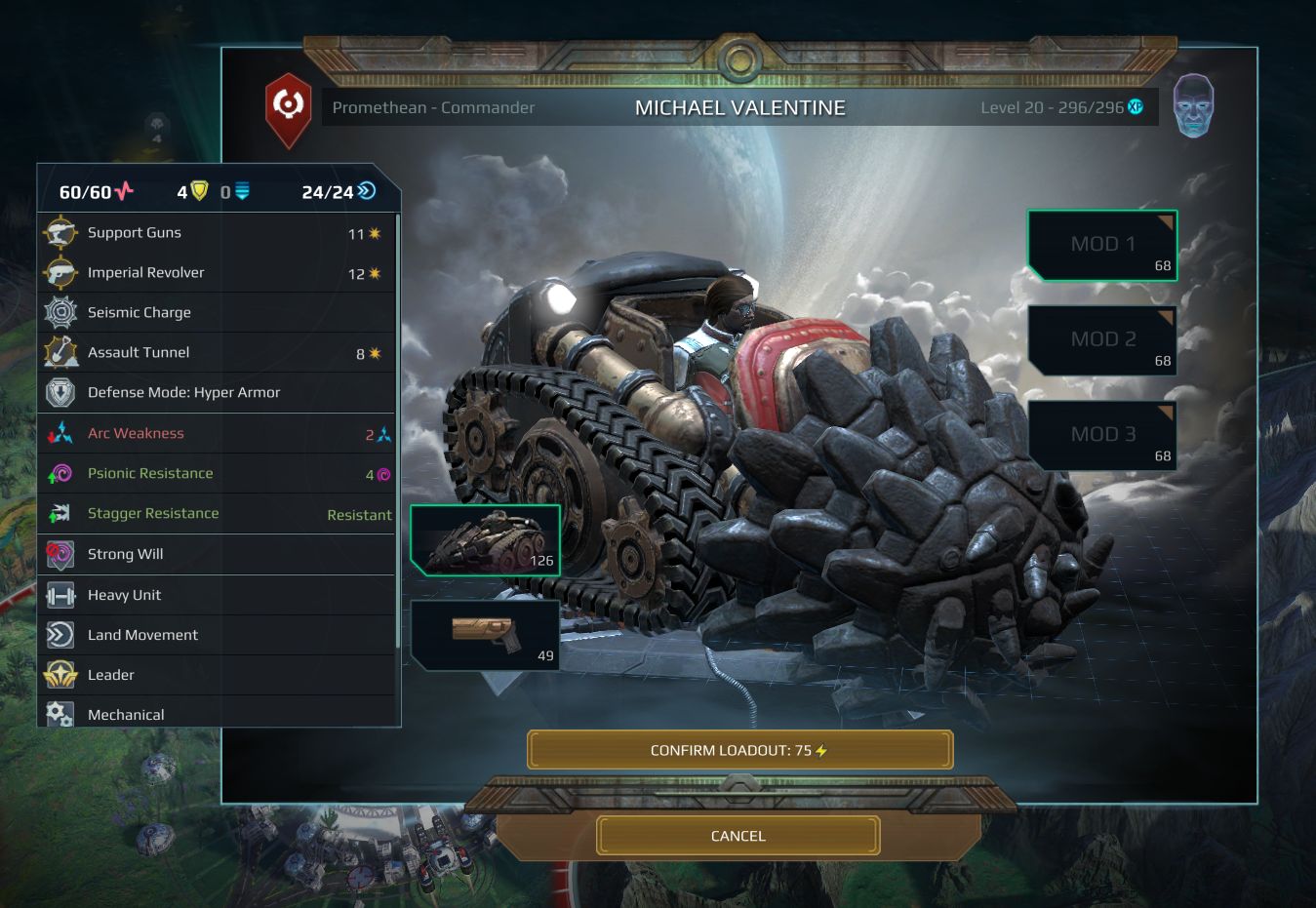 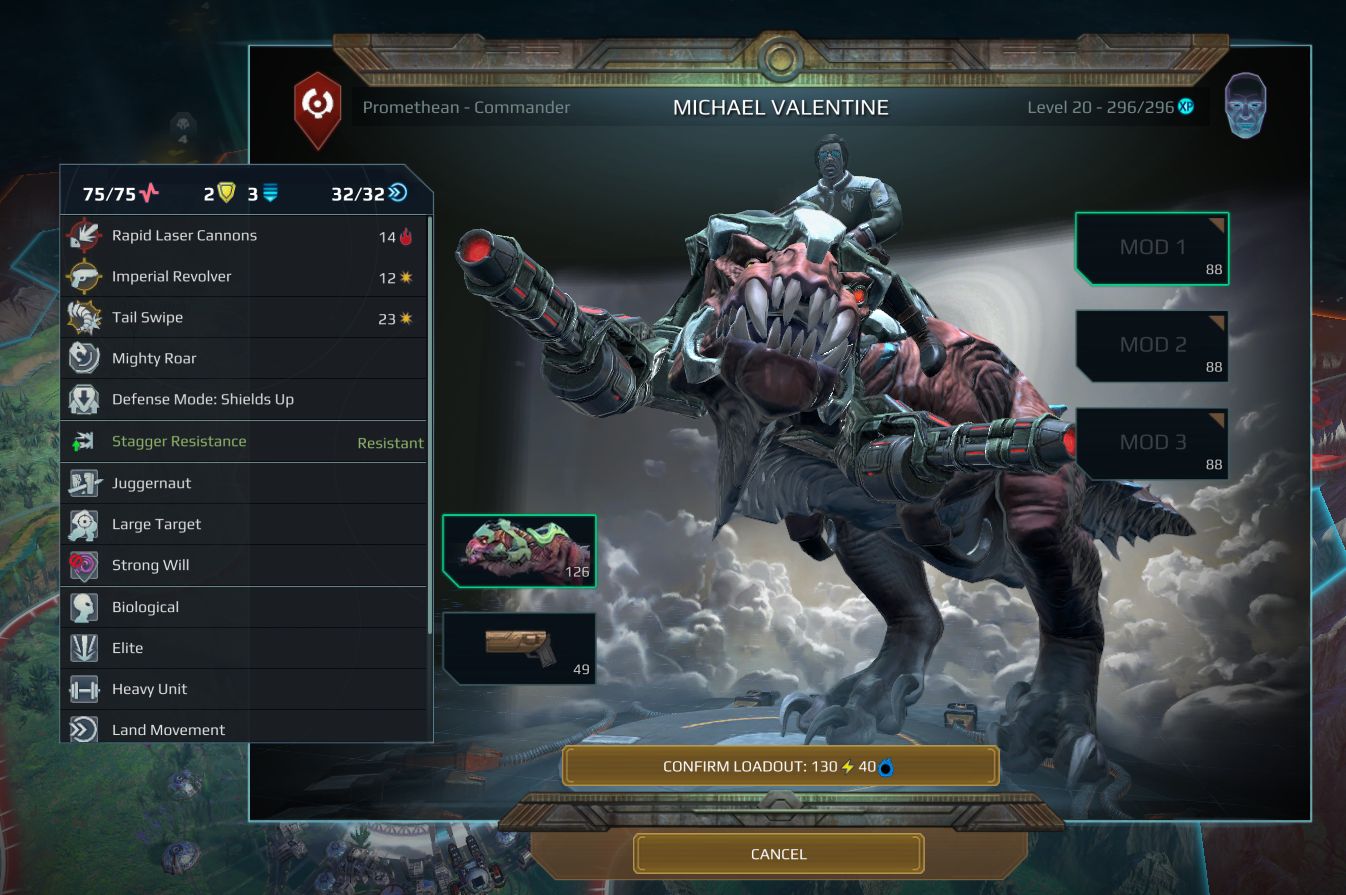 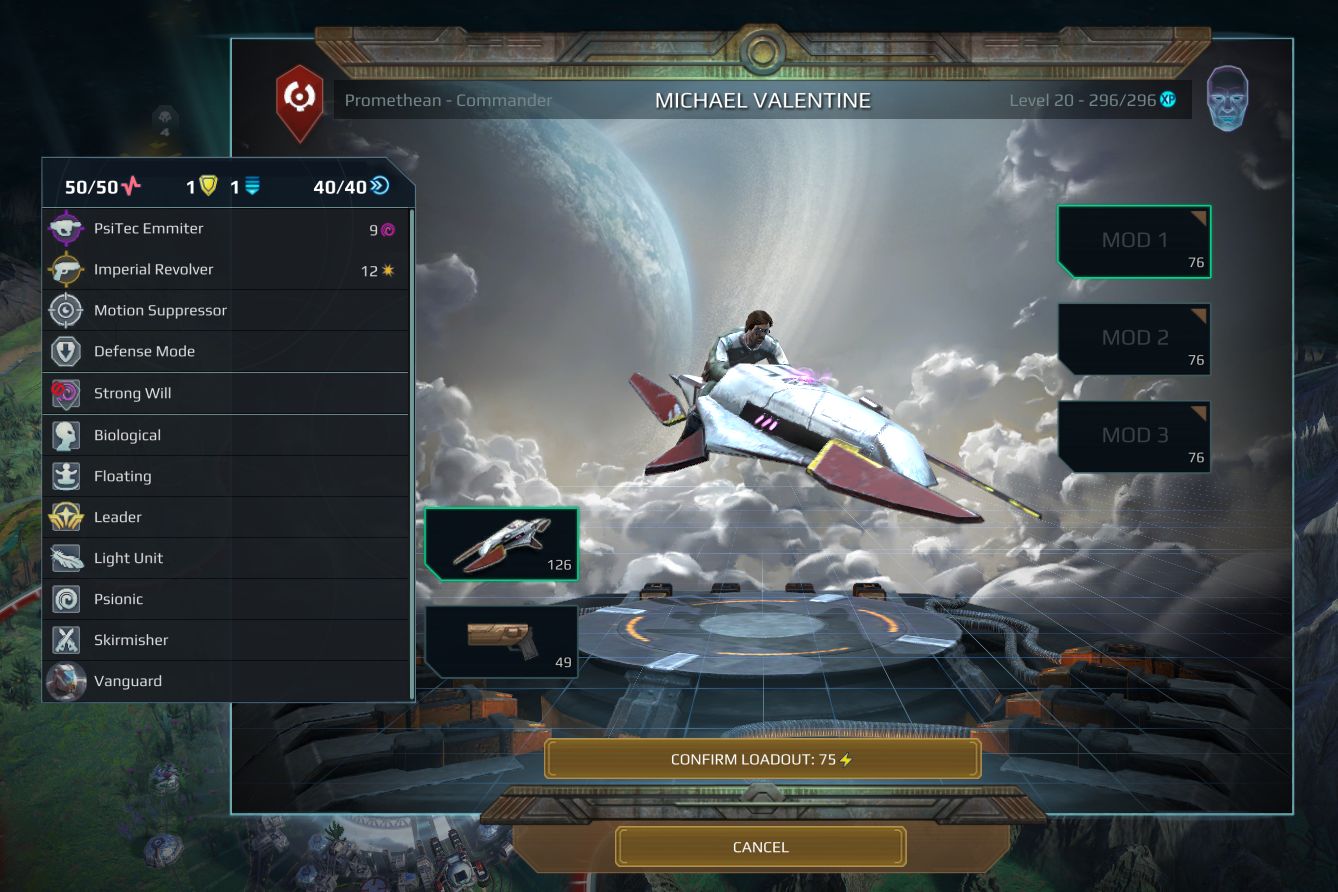 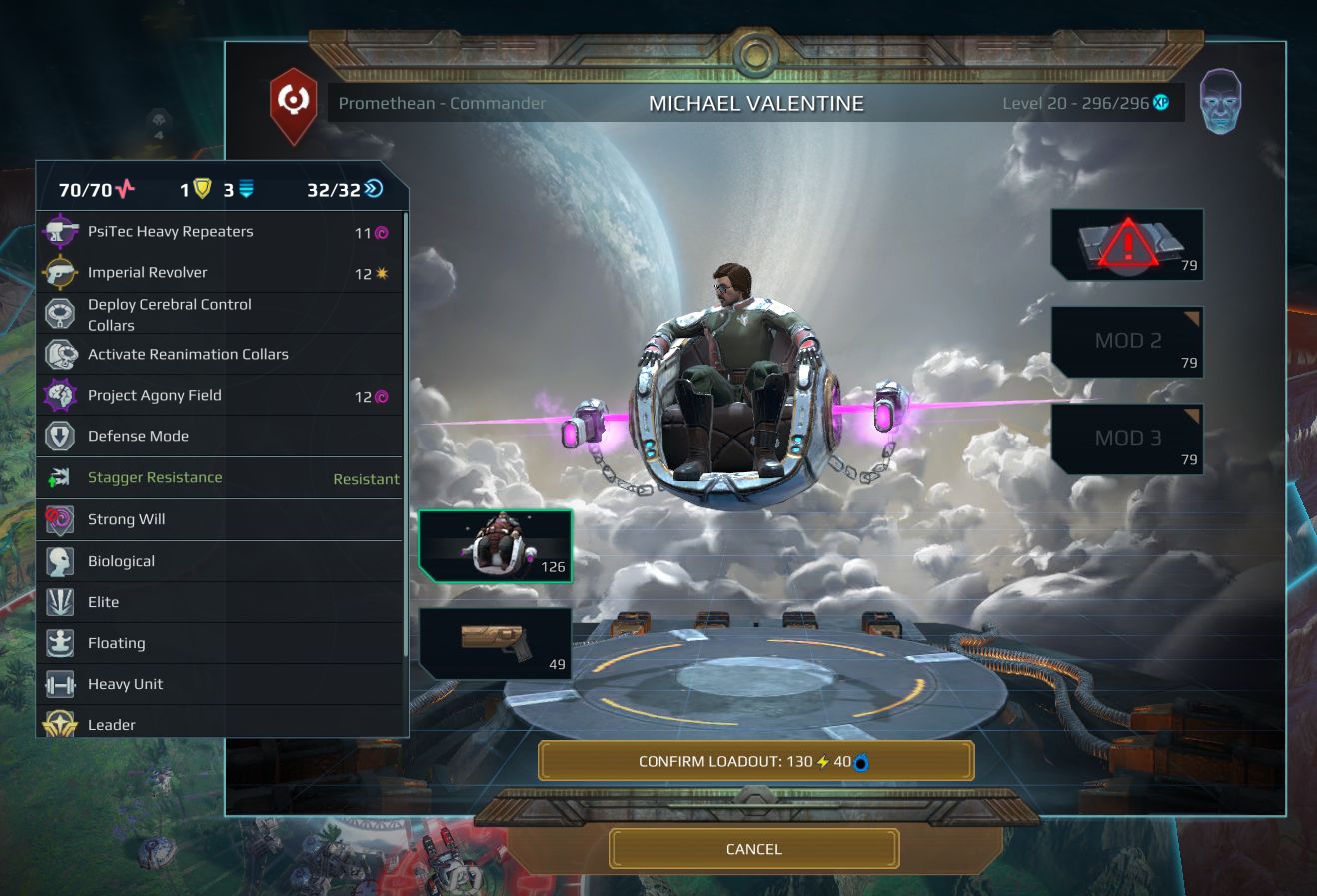 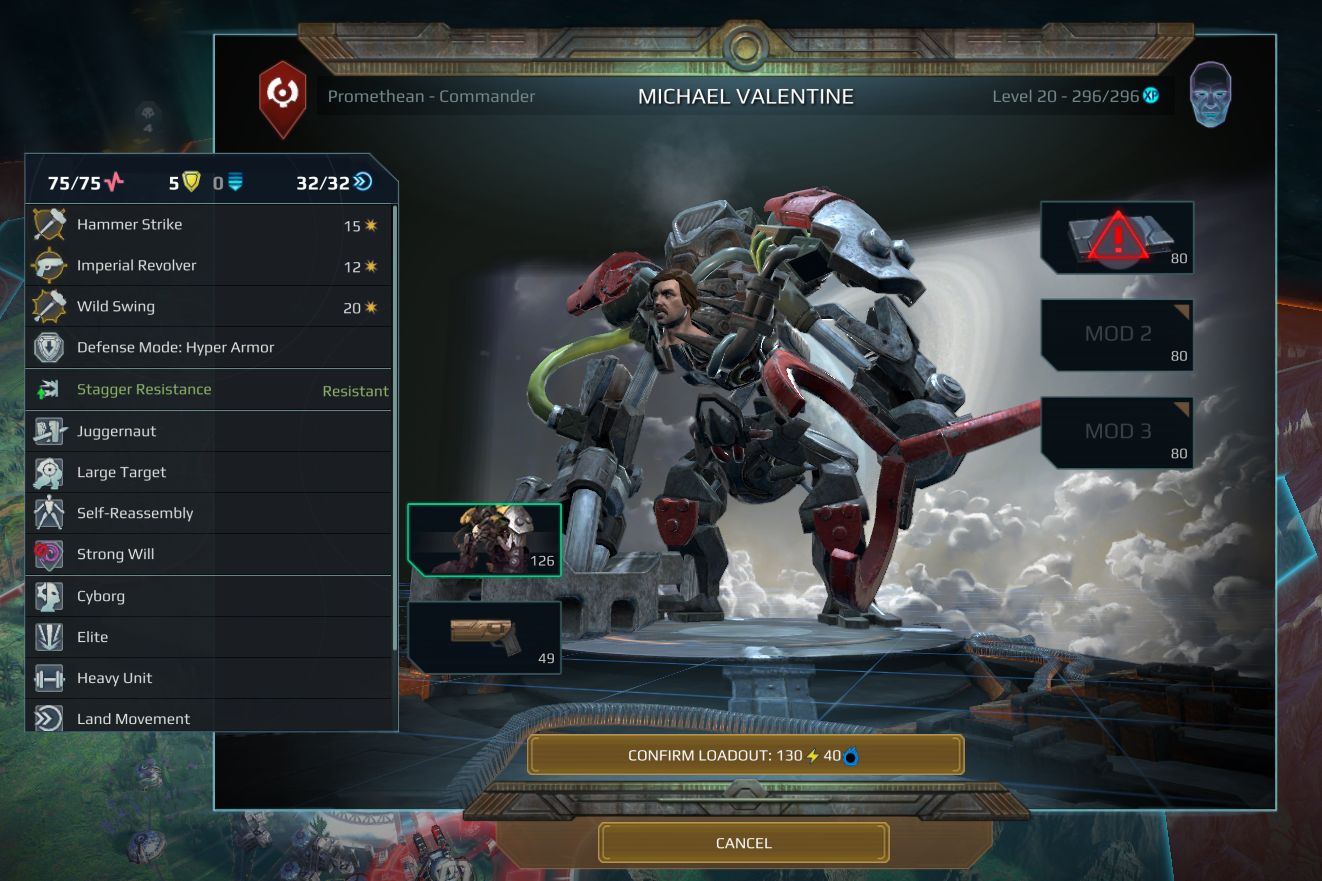 That last one and the one where he's sitting on a bug had me shaking my head and going, "Go home, Planetfall, you're drunk."

Cool evil-floaty-throne. And, wait, is that a agony-field projector built in, with which to inspire the proper Kneeling Before Zod? I want one.
Toggle signature
"A wise enemy is better than a foolish friend." -Arab proverb

Bah, I was almost first this week...

LennartGS said:
Item Couriering and per-hero inventories for unequipped items are no longer a thing. When something is unequipped it goes back to the arsenal. If you ever bought a standard-issue mod and no longer use it, it can be transferred to another hero via the arsenal.
Click to expand...

OMG guys...think about this for a few seconds. 
Is this the number of items available for that slot?
Last edited: Mar 7, 2019

Not yet sure if this is greater than what we have in AoW3 but it's looking good - hope to see some nice impact on multiplayer by the equipment slots.
Hatching an egg is so frustrating in AoW3 - 10 turns is just after the game is finished ):

Because of the head?

I'm afraid the Meme-Bot is fully armed and operational.

Can you get class vehicles like the phoenix walker as mounts?

I am consulting the data banks (my memory) and I think this was confirmed.


I think it was any vehicle and mount except the t4 stuff.

omg you can actually give your heroes Baron mechs? That's pretty cool! And I see with 'reanimation collars' that contrary to popular belief, it may be the Syndicate who are the true zombie masters, rather than the Assembly.
I don't know who this Michael Valentine guy is, but I can only assume based on this that he's a famous car thief

BloodyBattleBrain said:
I am consulting the data banks (my memory) and I think this was confirmed.


I think it was any vehicle and mount except the t4 stuff.
Click to expand...

My suspicion is that all hero mounts have to show the hero in one way or another. For instance, the vanguard walker could have a transparent cockpit, but the vanguard tank can't easily show the hero. So no tanks can be piloted.
Toggle signature
“When I became a man I put away childish things, including the fear of childishness and the desire to be very grown up.”
C.S Lewis

Afaik this is something new, and in addition to mounts.


mr_stibbons said:
My suspicion is that all hero mounts have to show the hero in one way or another.
Click to expand...

Except we've been told tanks are available as vehicles.

Plus, if your suspicion is because of the pictures here, know that those were probably chosen to show off Mr. Valentine.

The 80's aviator look is becoming a meme here.

I'm a bit sad that old head, accessories, right/left hands items were changed by simple mods. However, it could be better - game will show later.

Yeah it looks a bit rough, even for Assembly standards. The head sits at the same spot as the assembly skull head does, but for some reason the hero's neck is included. We can make that transition better. There is just so many items.

The Phoenix walker is available as hero vehicle. Not all vehicles show the hero sticking out. (like most walkers, planes) We just picked some images that showed Valentine. On the TC map, hero vehicles will always have the portrait of the hero rendered above them + the hero / commander insignia.

LOL Michael is sure sitting on that Hopperhound quite gingerly.
And you can equip a cyborg unit and then your hero will turn into a cyborg?
I do love that floating throne ball witch cerebral control collars... Syndicate, I presume.
Love the arsenal function. Man I hated the loooong postage times when ferrying units from one end of the map to another.

Zaskow said:
I'm a bit sad that old head, accessories, right/left hands items were changed by simple mods. However, it could be better - game will show later.
Click to expand...

True, I miss that too. Though mods will allow 4 slots for heroes, and now you basically can equip regular units with mods too... so basically give items to troops, something I always wanted.
I hope they will talk about unit advancement too someday. I am curious whether units will gain new abilities as they improve, or just HP and armor and damage.
H

I feel that the Arsenal system is a major improvement on every other game like this I've played, and possibly the biggest innovation I've seen in this game so far.

BBShockwave said:
LOL Michael is sure sitting on that Hopperhound quite gingerly.
Click to expand...

Considering their 'jump' ability, and the way they walk, I suspect he doesn't want to agitate his broken pelvis.

The car collection of Michel is really great, he must have a good job in the entertainment industry

Now who is Oku Chal'Drz?
That thingy fourth from below among the commanders.

Ridixo said:
The car collection of Michel is really great, he must have a good job in the entertainment industry

Now who is Oku Chal'Drz?
That thingy fourth from below among the commanders.