Hi there! The gameplay of Planetfall is split over the world map and the tactical combat map layers, as in the vintage Age of Wonders. In this post we’ll be looking at one of the biggest structural changes to the world map: the Sector System.

Planets: But let’s first start with the overall world map. It now wraps horizontally, so maps feel like Planets. Of course, this has strategic consequences too as you are no longer able to camp in corners. Planets are built from a combination of distinct landscapes, such as frozen wastes, lush jungles, and deserts, with their own alien flora and fauna. There are five main land biomes + oceans, which have varied resource yields to be exploited through research.

At the start of a session, you can choose a planet template, or shape your own. All procedural generated planets get a name and are plotted on the Star Union’s galaxy map. You can create desert worlds resembling Tatooine, the feral jungles of Avatar, or the infernos of Hell. There’s loads of settings, like you can control the amount of Star Union Ruins on that particular world.

Sector System: A patchwork of bordered areas call Sectors make up the surface of planets. This sector system has a big impact on the world map gameflow. They come in a number of types:

The Sector interface brings it all together. This sector contains a Landmark: the Xenolife Institute, and a crystal node + a Targeting Array as sector defense. 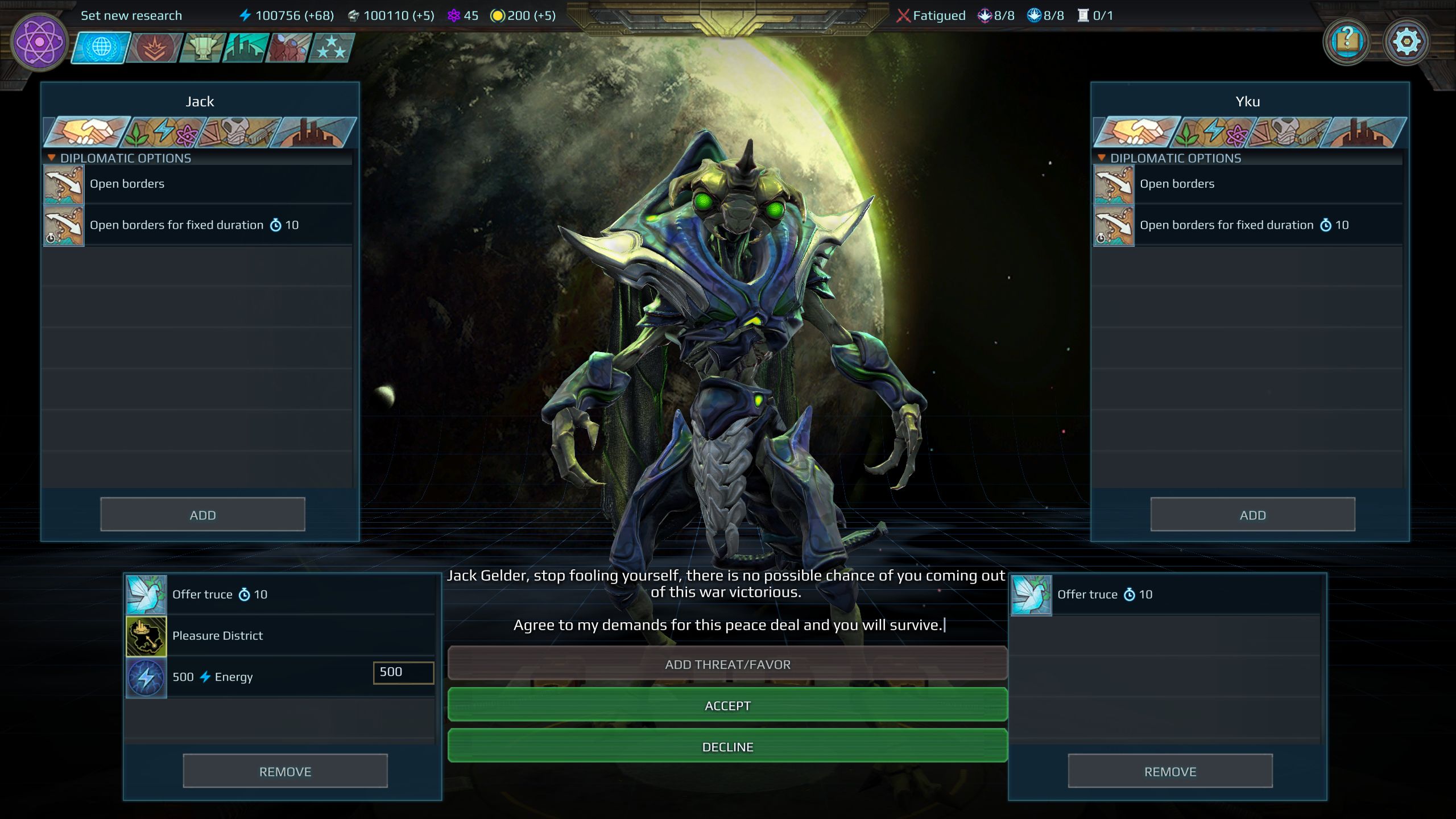 In this screenshot a cheeky Kirko is asking for our Pleasure District Sector.

Next week Arno will talk about the improvements of the new engine - This is my last journal for a couple of weeks. Next to a major milestone delivery next week I also have a “delivery” in the family planned.
Expand signature
Lennart Sas
Director Planetfall, Managing Director, Co-founder @ Triumph Studios
Planetfall Development Diary List
Follow me @ Twitter

This seems similar to Stellaris pre-2.0 patch. Is this a coincidence or was this inspired by that?
Expand signature
Pssst hey kid, you want some DLCs? First one's free

Also, considering the mention of diplomacy I wanted to ask, will there be an option where you can threaten someone, eg, "give me X and Y or I declare war on you"? This is something that I feel is missing, even if a demand system is there, because the AI will not understand that you declaring war is the consequence of an ignored demand.

And regarding the trading, I really really really want to have an option to see which sector or city is on the table (edit: the position it has on the map I mean). In Civilization I always find myself remembering city names and then going into peace deals after winning a war to make sure I get the cities I want, and if the AI offers me a peace deal instead I can't even do that because I can't exit the screen.

LennartGS said:
Next to a major milestone delivery next week I also have a “delivery” in the family planned.
Click to expand...

Really love the flavor, as well as strategic consideration, being given to sectors. Really upping the game from past titles.

How are sectors assigned to colonies? Is there a limit to how many sectors a colonny encompass? Looking good overwise, the prospect to trade less important goals than cities to settle peace looks good even if often times a limitation to how diplomatically wars can be settled in many games is ampered first and foremost by the willingness of the AI to offer reasonable offers (a good exemple is an AI with numerically superior army (often because of AI bonus) that is asking for concessions from a player that is winning, so eventually the player is forced to fight the AI to the death and conquer it because it usually looks at army numbers rather than who is wining battles/occupying land, and once you've done the first and hardest half of the job to force the AI into the peace table you might as well finish off the easy half rather than settle for a triffle).
Expand signature
"BOUNDARY, n. In political geography, an imaginary line between two nations, separating the imaginary rights of one from the imaginary rights of the other."

Something I'd like to point out: These dev diaries should be on the first page when you visit the forums, like the dev diaries for other games.
Q

Colonist slots? I'm not too eager to see colonist slots, I'm getting some serious Civ/Colonization flashbacks.

Forward bases sound like influence star bases from Calactic Civilizations, pushing the boundary so far that mines/colonies can actually rebel and switch sides. I assume diplomacy will also include "Get that forward base outta here or be prepared to defend it with all your might, punk!" options. And "Sure, we will knock it down... at some point, wink wink" responses.

UI is still WIP I see, quite cluttered and messy, difficult to focus on what is supposed to be important. I will enjoy keeping up with how it evolves.

I really, really like the art style of the icons in the interface. Very colourful and they really make everything nicer to look at. AOW games have always made great use of bright colours on the map and it's nice to see some of that in the icons too now! Improving on an already great game or game series is often done by small changes like these, not by making huge changes to gameplay.

Oh, btw Lennart: I notice that apart from the 1st one, these dev journals are not appearing on the forum home page: https://forum.paradoxplaza.com/forum/index.php Maybe that is intended, but it seems that other PDX games' dev diaries and updates appear there, so perhaps you forget to tick a box or whatever when posting these.

And congratulations ofc on the upcoming "expansion"

Edit: other peeps already noted the thingy about the journals missing on the home page while I was admiring the screenshots and typing this.

Good point on the home page exposure - I've asked to have this one pushed to the front page! I know now how to get new posts there. Thanks!
Expand signature
Lennart Sas
Director Planetfall, Managing Director, Co-founder @ Triumph Studios
Planetfall Development Diary List
Follow me @ Twitter

If colonists can be freely reassigned, then it's more like the Endless Legend style population management. There each population can generate one of the game's resources and various improvements and conditions will modify how effective a given city is at producing those resources with population. There isn't a limit on how many people can be assigned to what in that game though, so that's one difference for sure.

I'd be nice to have two decline modes - one respectfully, and one threathening.

"We cannot afford that, how about this peace offer instead ?"

"Hah ! Then bring your little armies. I just bought a new swatter I wanted to test, punk! "

Which could have different effects, the first costing you some influence and not giving casus belli unless the demander does a better offer (and possibly gaining him influence), the second option draining some influence from your enemy and giving him instant casus belli.

What's a targetting array do ?
A

LennartGS said:
Colonist assignment is fairly straightforward and can be fully automated. Colonists act as wiggle room in your economy (on top of flat income sources). TThere is no per tile or per sector switching. You assign Colonists on a resource channel. Slots gained from individual sectors are pooled together.
Click to expand...

Looking forward to seeing how it plays in practice.

This is looking great - can't wait for next dev journal.

This sector system is really intriguing. Hope it works as good as it sounds!

Will maps have climate zones or will different climates be all mixed up randomly?

Just noticed the unit guarding the crystal. Looks quite creepy. I guess it's one of the Paragon?
H