While a lot of attention to has been paid to the units that you will be leading into battle, the tactical maps are the unsung heroes of combat. In this journal we’ll be talking about what functions these maps serve, and how we design them.


Planetfall takes place against the backdrop of a fallen empire, the Star Union, and the planets you explore are scattered with the ruins of broken cities. When designing ruins maps, we try to tell a story of what these ruins were before they fell: 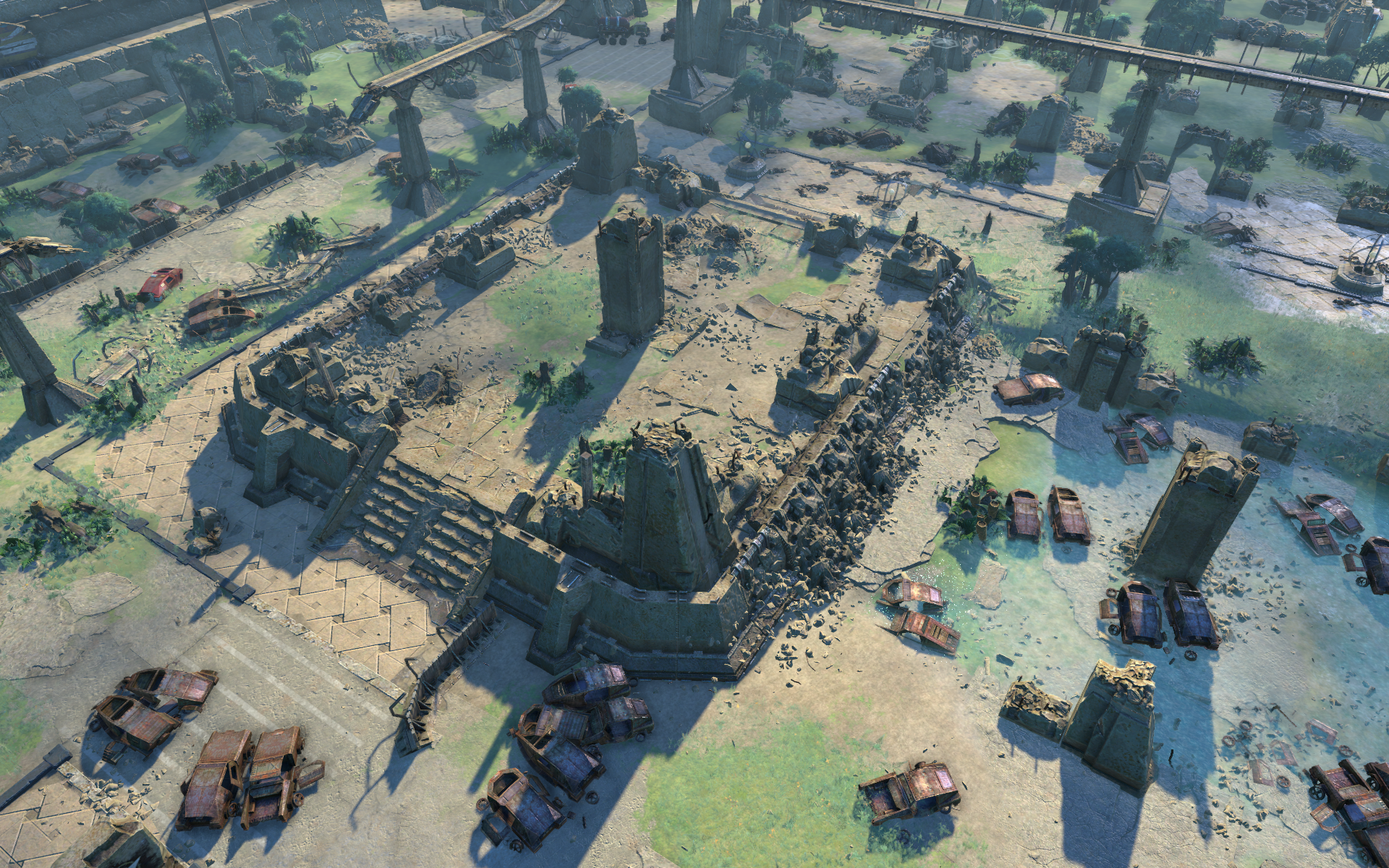 Here we can see what used to be a skyscraper, to one side wrecked cars are scattered through what was once a parking lot, and we can also see that more environmentally conscious employees could have come to work on the monorail tracks that run nearby.


When you look closely, a few corpses are scattered around the entrance way to the upper right. Perhaps they were caught outside when disaster struck the city, or perhaps they were looters who got shot down by the building’s security. In these cases, the actual story is less important than giving the impression that there is a story for the player to guess at.


Scattered amongst the ruins are many imperial facilities that you can capture and make use of. The following is a science facility that you can utilize to accelerate your research: 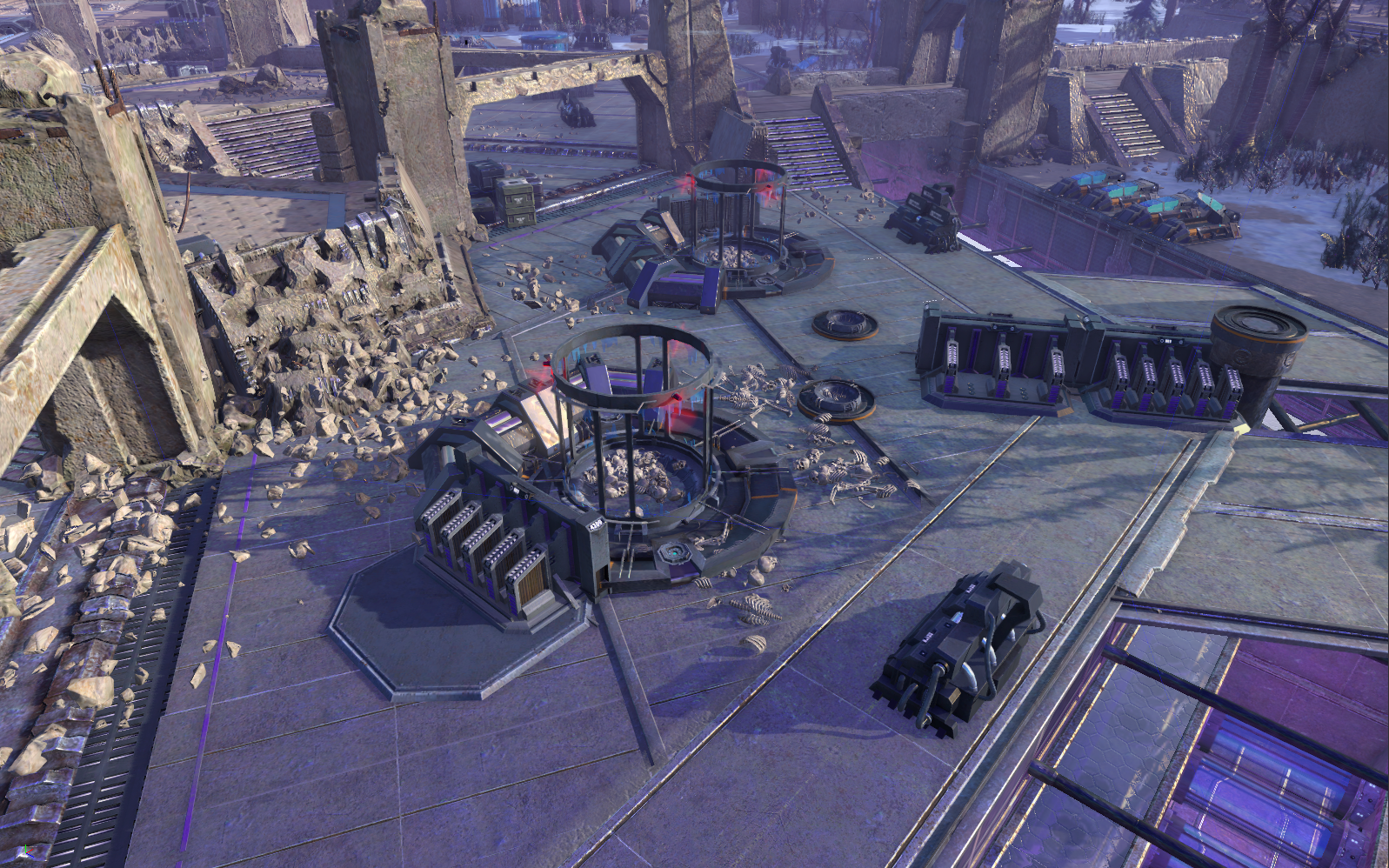 Perhaps the specimen cages here were used to experiment on the Kir’ko. Perhaps they were used in capturing and taming animals by the scientists who would later become the Amazons. There also tracks of glowing machinery underground, sleeping pods with half opened doors, all of these elements come together to paint a picture of the world and bring it to life.


Of course maps also have a far more practical purpose, the shape and features of a map can have a huge impact on how combat within it takes place. 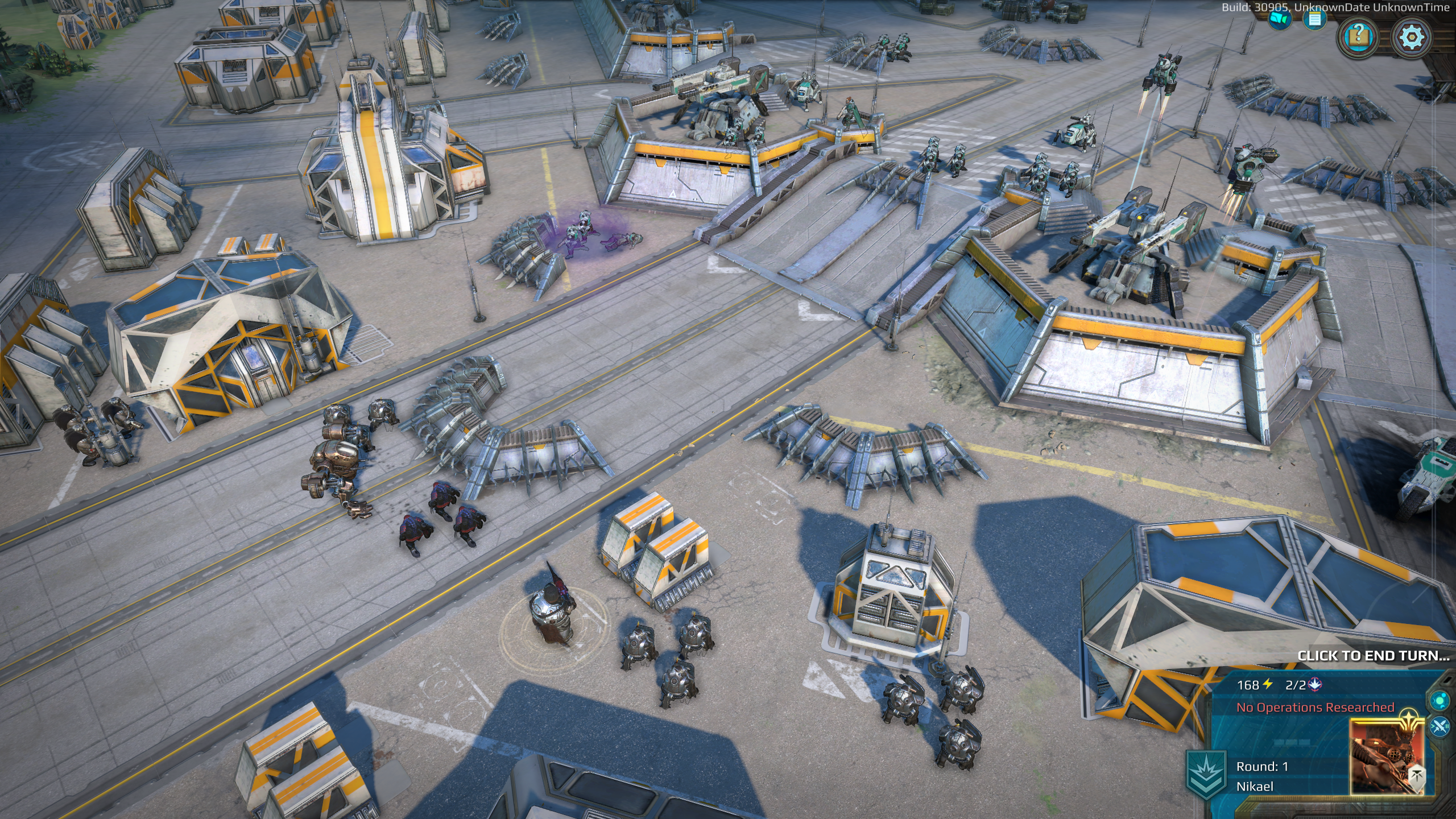 Here we see the outskirts of an Vanguard colony, where one player will be fighting off the invading forces of a Dvar player. There are 4 main features in this map that affect combat.


High Ground - The defenders start on higher ground than the attackers, giving them an accuracy bonus.


Cover and Blockers - The obstacles scattered across the map grant cover, and interfere with firing lines. While a lot of this has been set up to aid the defenders, there is enough cover on the low ground to allow the attackers to approach while having some degree of safety. The majority of obstacles are also destructible, so players can deploy artillery or special operations to remove them and nullify the defender’s advantage.


Choke Points - The spaces between the obstacles, and the ramps that lead from low ground to high ground, provide choke points that restrict how the attacker can approach the defenders. Choke points slow down attackers, and force them to group their units into tight spaces where they are more vulnerable to area attacks. Once again though, the attacker can simply blast open a path with artillery, or bring aircraft and fly over the top of it all!


Turrets - Players can choose to further fortify their colonies with defensive emplacements. Each race has their own flavor, with the Vanguard here displaying Repeater Defense Turrets that fire kinetic rounds that can stagger attackers. The attacker does not need to destroy these turrets to win the fight, but their long range and high damage potential make them a dangerous thing to ignore.


Some maps have dynamic features which change battle in other ways: 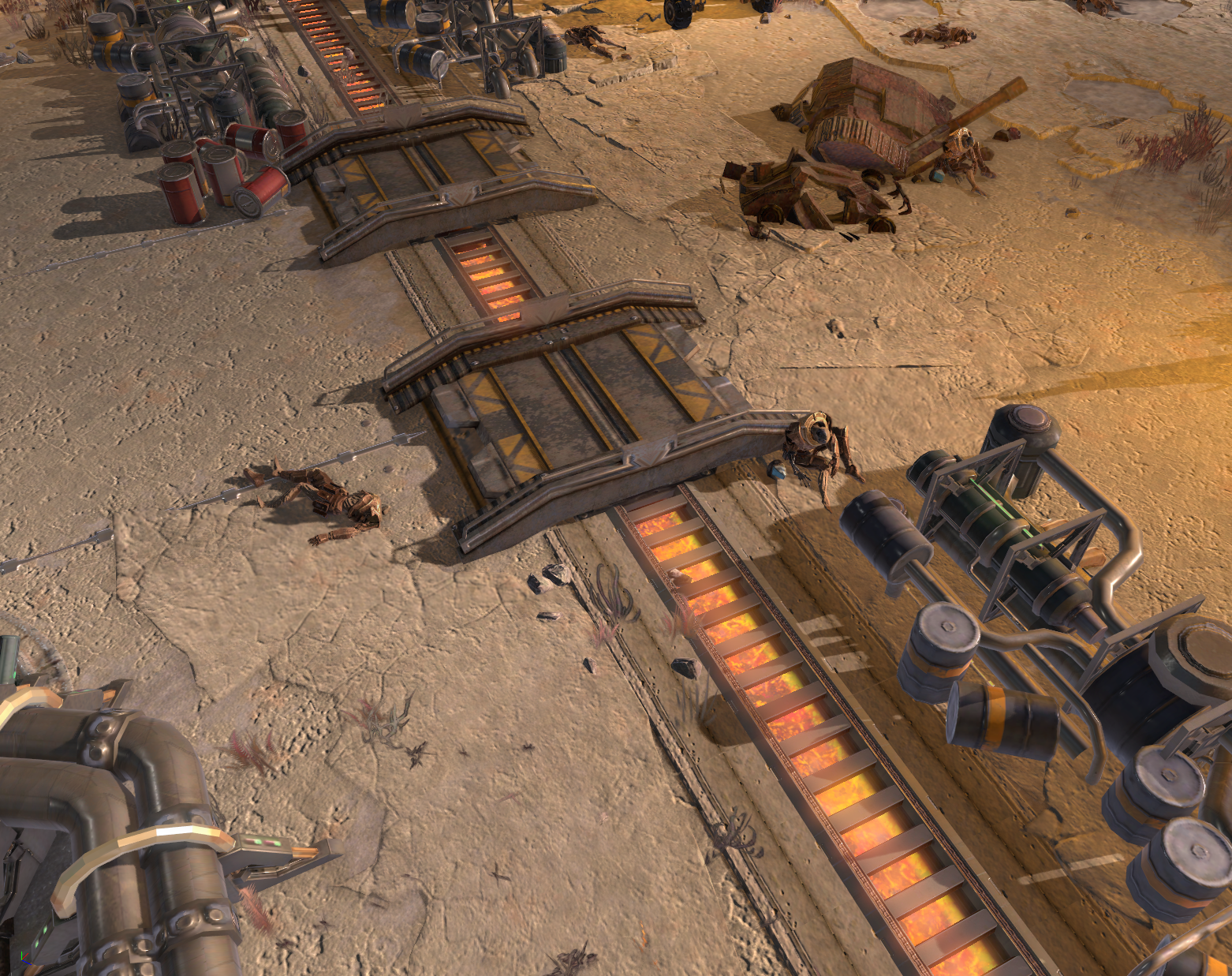 The fire grills on the ground here do minor damage to units that move over them. The damage is low enough for the player to risk it if they’re in a rush, but can still be enough to tip the tide of battle against someone who is too careless. 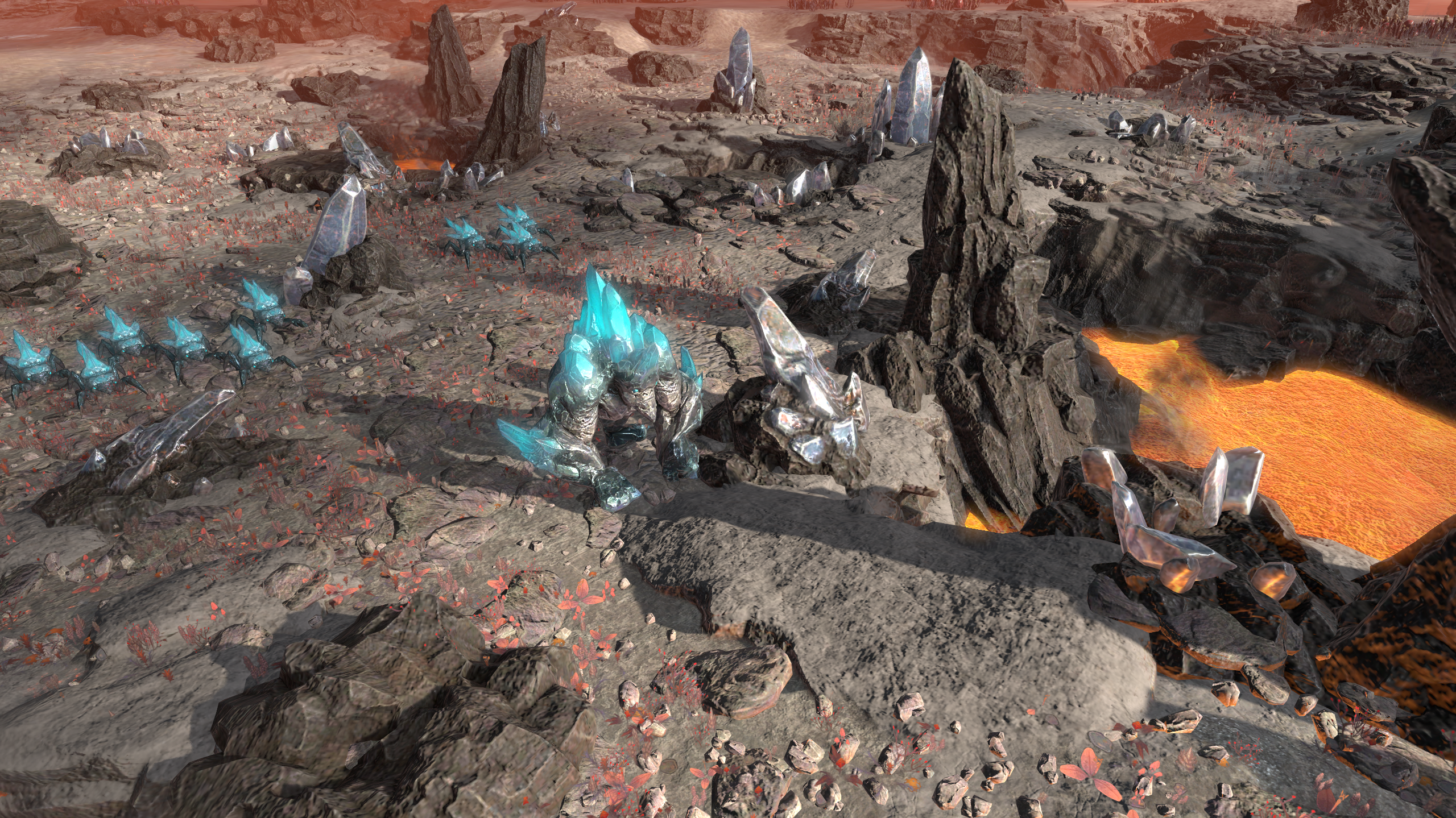 Quartzites are mineral based organisms that live in nests in the wilderness, these nests are scattered with strange crystals that explode with electricity when damaged. This is bad news for any mechanical units that are nearby, but beneficial for the Quartzites themselves who are actually healed by it.


The planets of the Star Union contain black sites and experimental facilities where mystical technologies and devastating weapons were developed. 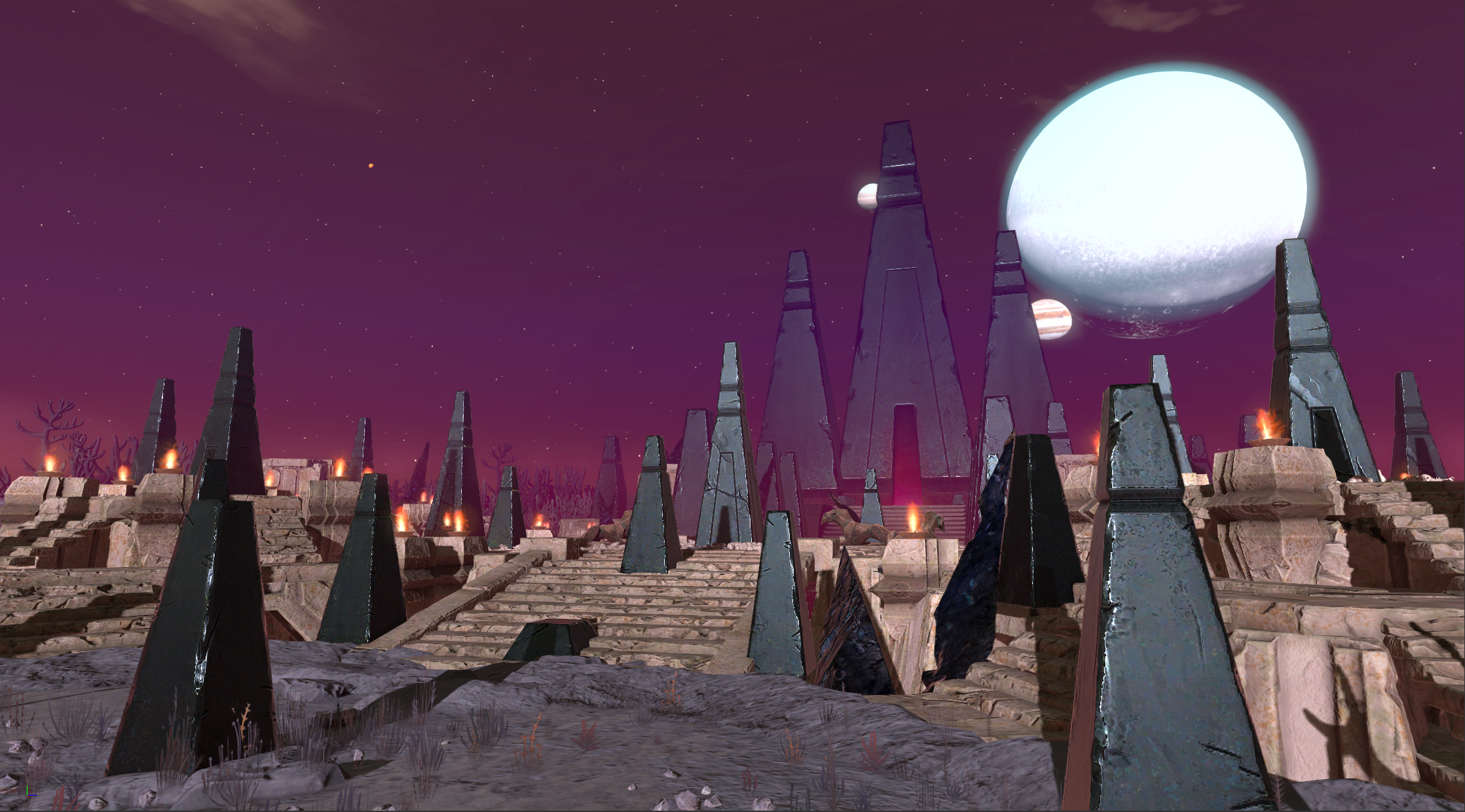 Only the bravest would dare enter these areas, for not only are they guarded by some of the most powerful armies on the planet, but also by remnants of the technology they once contained. Invaders may be struck down by interdimensional energy blasts, or driven mad by visions of the abyss, but that is a story for another dev journal!

At first look I thought it was a square of some kind that held a statue or monument at the center. The image is so much more striking knowing it was a skyscraper.

The streams have already driven home the point how awesome the tactical maps are. With the amount of detail employed, it's probably safe to say that the total number of different maps will be not THAT high at release and that patches will bring more of them to increase variety ... Hopefully.

Very nice looking maps, and can still clearly see cover and terrain you can pass over.

I do have one suggestion for the colony map though, could it have the teamcolors of the controlling player? I think that would make it feel a lot more like you own it.

What is tactical combat like in this game? Anything that it can be likened too for a casual observer?
Expand signature
​

Jako473 said:
What is tactical combat like in this game? Anything that it can be likened too for a casual observer?
Click to expand...

It's fairly similar to X-com's combat. Any of the previous Age of Wonders games are of course a better comparison, but I assume you don't know those either.

There's some gameplay footage available of AoW: Planetfall from the dev streams if you want to check that out.
Last edited: Jan 31, 2019

After two screenshots of (presumably?) city sieges with no gates, I wonder if the gates have made it into the game at all. If not maybe going up the ramp cost a little bit more time movement points?

The Psynumbra dungeon looks great. You can feel the power of the dark side... er... the abyss flowing through you. Ominous, obviously entering there is a bad idea and of course every player will enter in it, and with advance science enough to maybe be magic. Looks, great, dark, ominous, arcane and mysterious, congratulations!!!
Expand signature
Still waiting for Runemaster

Love the new tactical maps so far. I am interested to see how settlement tactical maps look, unless I am forgetting that we saw them already.

The details you guys put into those maps are awsome. They really look beautiful. Big kudos to the art team!

Ferrin33 said:
I do have one suggestion for the colony map though, could it have the teamcolors of the controlling player? I think that would make it feel a lot more like you own it.
Click to expand...

That's a good idea, I shall pass it on!


Fo Ren G said:
After two screenshots of (presumably?) city sieges with no gates, I wonder if the gates have made it into the game at all. If not maybe going up the ramp cost a little bit more time movement points?
Click to expand...

That's right, planetfall cities do not have gates. In AoW3 siege maps were effectively split into two, with an inside and an outside. This made sense in the setting, and played well since the majority of your units were melee. In Planetfall, the prevalence of ranged weapons make sieges of that type very fiddly, with lots of messing around trying to get units to outrange each other, something the tactical AI would probably be awful at.

Jako473 said:
What is tactical combat like in this game? Anything that it can be likened too for a casual observer?
Click to expand...

Or if you can't/won't then watch a video.

He has a multipart Play through of a Dwarf Dreadnought game that he did.

I think PF is the same but with more ranged combat and considerably larger maps and I *think* fewer battles overall because of lower numbers of units at any one time.

That's the impression I have.

Tombles said:
That's a good idea, I shall pass it on!
Click to expand...

This game is looking so good.

The dvar attacking the vanguard base look like psynumbra. Can't see much of them but now we know there is at least one psynumbra racial unit. Also the leader's gun
H

Is there any randomisation of destructible objects, such as cars, in these battlefields?

I remember those fire grills from AOW3 forge battles. Nice turrets too! I always wanted such stationary defense units, I mean AOW2's ballistae were basically this anyway, they could just move very slowly.
P

Tombles said:
Here we can see what used to be a skyscraper, to one side wrecked cars are scattered through what was once a parking lot, and we can also see that more environmentally conscious employees could have come to work on the monorail tracks that run nearby.
Click to expand...

This doesn't look right. Wouldn't the skyscraper have been a huge building? There is very little left of it, and very little rubble. Where did the rest of the skyscraper go? Any why did cars (that look absurdly 20th / 21th century) and corpses last, while nearly the whole skyscraper rubble disintegrated already?

Would the empire have build skyscrapers moslty from biodegrdable materials (ecept for a reinforced concrete foundation)? But why would such materials then not be used for cars? And give the huge size of a skyscraper, even a biodegradeable one would probably last longer than corpses.

Maybe all you are now seeing is the remains of the foundations, and the rest got totally blown away? Nuclear attack for example.

And the rust is from cars after the event.

and yeah, the basic form of a car isn't l;ikely to change - it's not very different from its horse drawn antecedent anyway.
P

BloodyBattleBrain said:
Maybe all you are now seeing is the remains of the foundations, and the rest got totally blown away? Nuclear attack for example.

And the rust is from cars after the event.

and yeah, the basic form of a car isn't l;ikely to change - it's not very different from its horse drawn antecedent anyway.
Click to expand...

Hmm, assuming that the skyscraper got destroyed long ago, and the monorail and car park were built later it might work somehow. After the destruction of the skyscraper the rubble would have been cleared, but the foundations left there - either as a memorial or just considered too expensive to clear (the little rubble we ere seeing would be from later deacy). The monorial would have been built or rebuilt later - that filigrane structure we see would probably not have survived whatever destroyed the skyscraper in an attack.

Or maybe there could have been a controlled demolition - so the damage to the skyscraper would not be from any conflict - which would explain the cleared rubble, too.