Menu
Install the app
You are using an out of date browser. It may not display this or other websites correctly.
You should upgrade or use an alternative browser.
Age of Wonders: Planetfall 1522 Bug reports 1537 Suggestions 531 User Mods 79 AoW: Planetfall: News and Updates Archive 41 Multiplayer 53
Show only dev responses

Hi there, welcome to this week’s Planetfall Journal! This surely is the Vanguard’s week with the Vanguard Trailer and last Friday’s Gameplay reveal. To close off the Vanguard onslaught, this Dev Journal is packed with in-depth Vanguard info: their development process, background, campaign goals, newly unveiled units, mods, and operations.

To Recap: The Vanguard originate from the expeditionary forces sent out to claim new worlds beyond the Frontier of the Star Union and its Nexus hyperspace network. When an expedition arrived at their destination and built the Nexus Portal, they discovered a galactic cataclysm had taken place during their long journey in cryosleep. Now the Vanguard need all their combat and survival skills to prepare for the showdown with the forces that brought down the Union.

Conceptualization. In the early days of development, the Vanguard faction started off as a Human/Terran faction, as early pre-production Planetfall didn’t have a premise centered on the shattered galactic empire. Back then, factions emerged from various unconnected home worlds. As pre-production continued, they were morphed into the Star Union’s expeditionary forces and had their unit roster and techs developed to reflect this. Here, you see some great concept art by Michal Kus with later additions made by Rich Burgess and Jordy Knoop. Some have WIP explorations not in the final game. 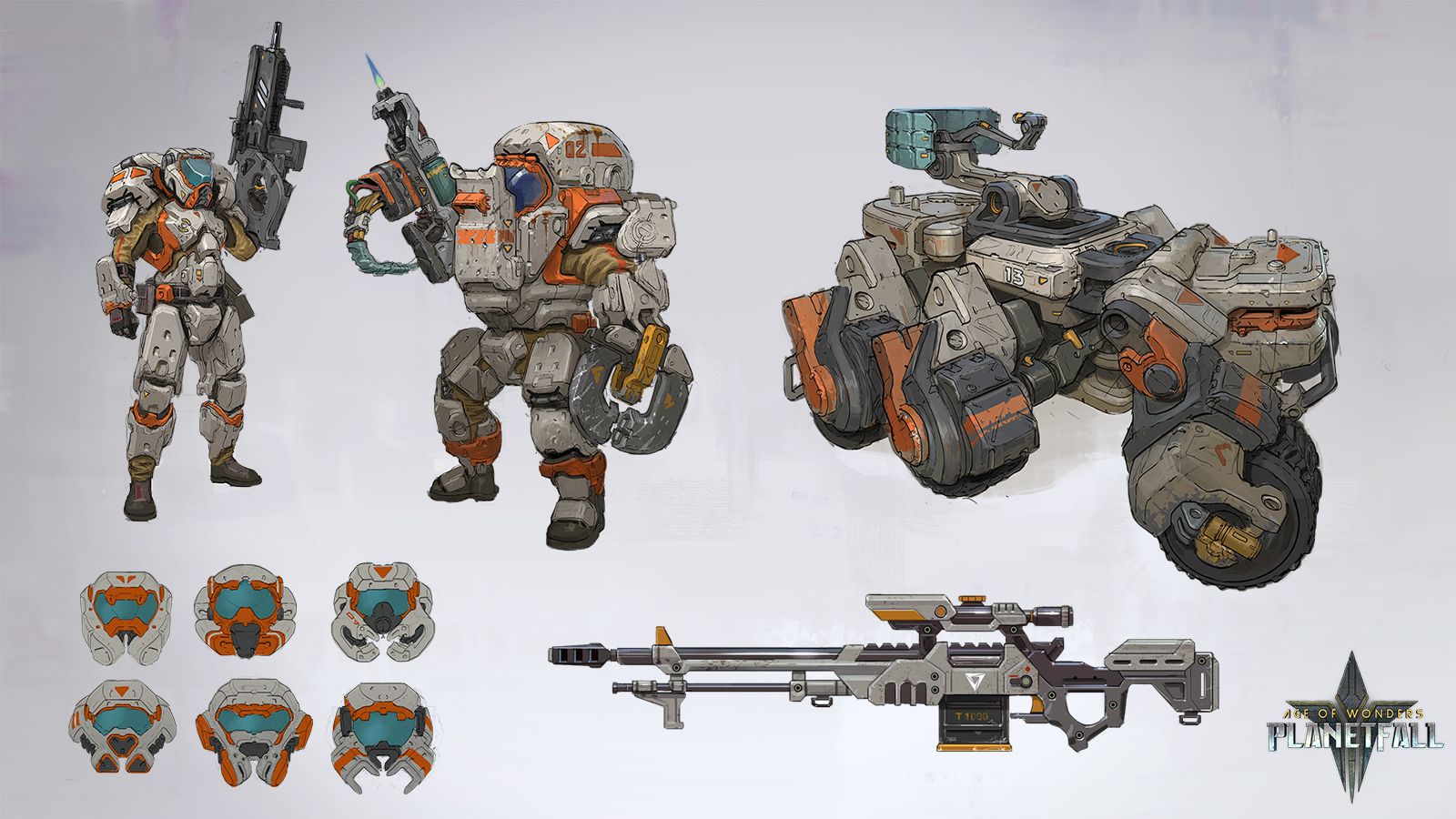 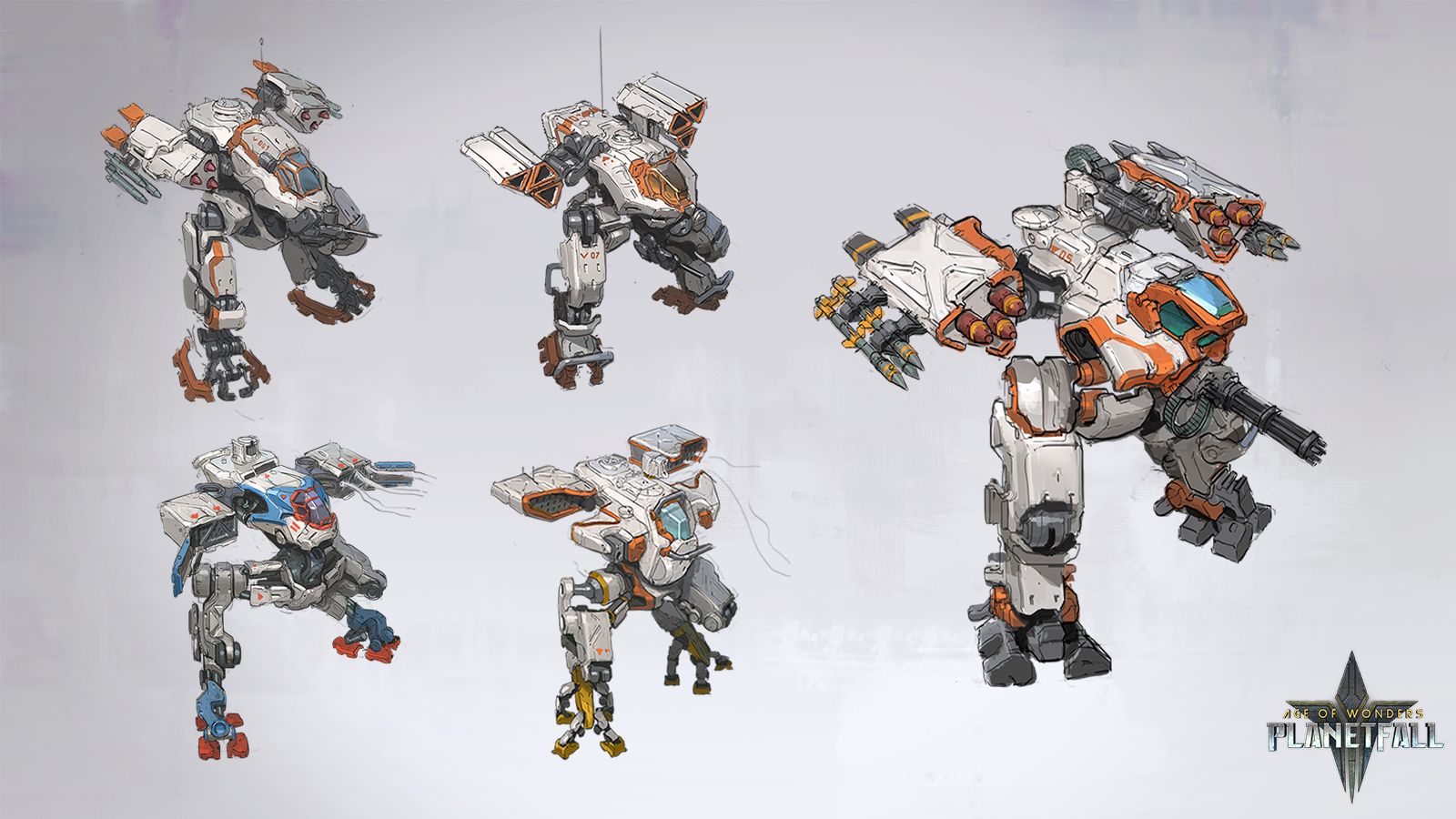 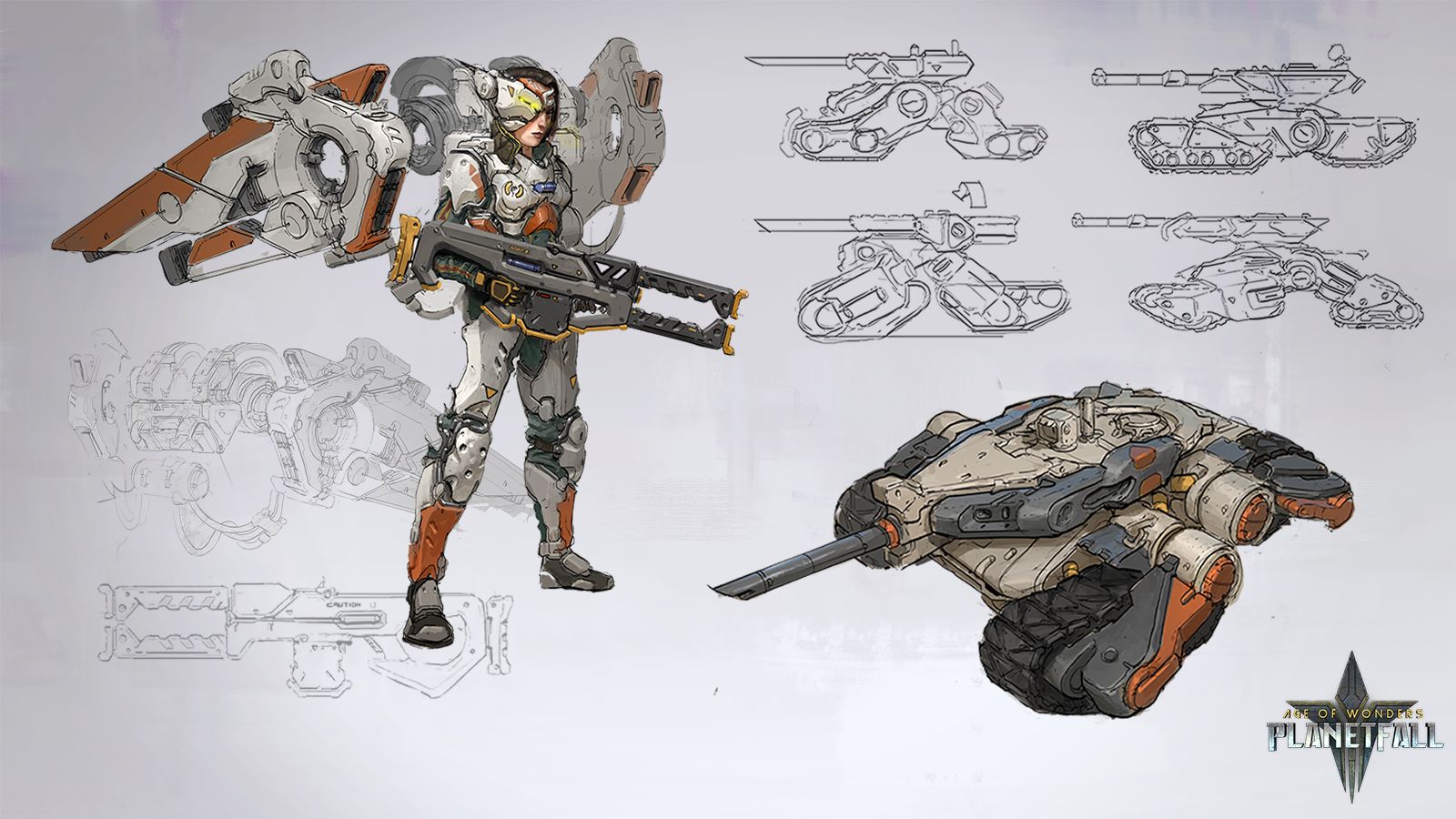 The Vanguard Campaign: I don’t want to give away campaign material spoilers, it should be safe to say that the campaign missions involve Commanders discovering their faction’s (or their personal) roots.

The Vanguard ranks include many outcasts with little ties to society; so the effects of long interstellar travel in cryosleep and the resulting time dilation didn’t matter to them. Broken relationships and shattered reputations don’t follow you to the frontier – only the brute will to survive remains.

In the case of the Vanguard, their campaign mission starts as they awake from cryosleep making their way to the frontier transit world “Leave 6”, where the Union’s expeditionary forces were restocked and could take their leave in between missions. It is here that they will start figuring out what happened to the Star Union and will be confronted with ghosts from their past. 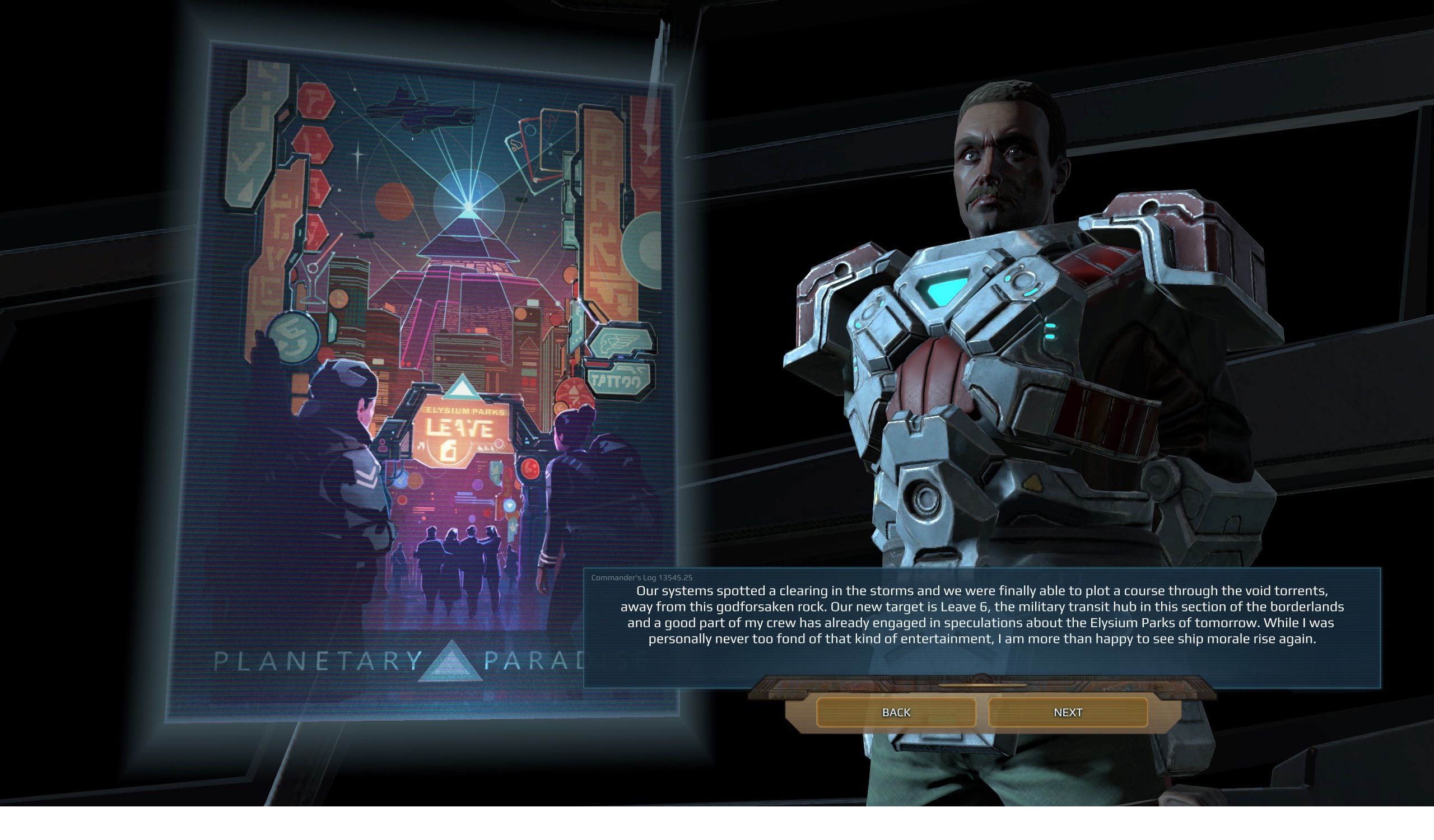 Here is the Mission Briefing from the first Vanguard mission. Interesting fact: You can now choose to customize your Campaign Commander’s appearance and perks in Planetfall.

Here are some excerpts from the Vanguard tech tree. You’ll see the Vanguard are big on rapid deployment and drones. The Vanguard are not all shock and awe though, as Vanguard Doctrines have some ways to pacify rivals in non-violent ways. Note: the designers are still balancing the tree so I removed exact stats from the individual techs.

We’ll close off this journal with some of the unit cards you have not yet seen from the Vanguard. 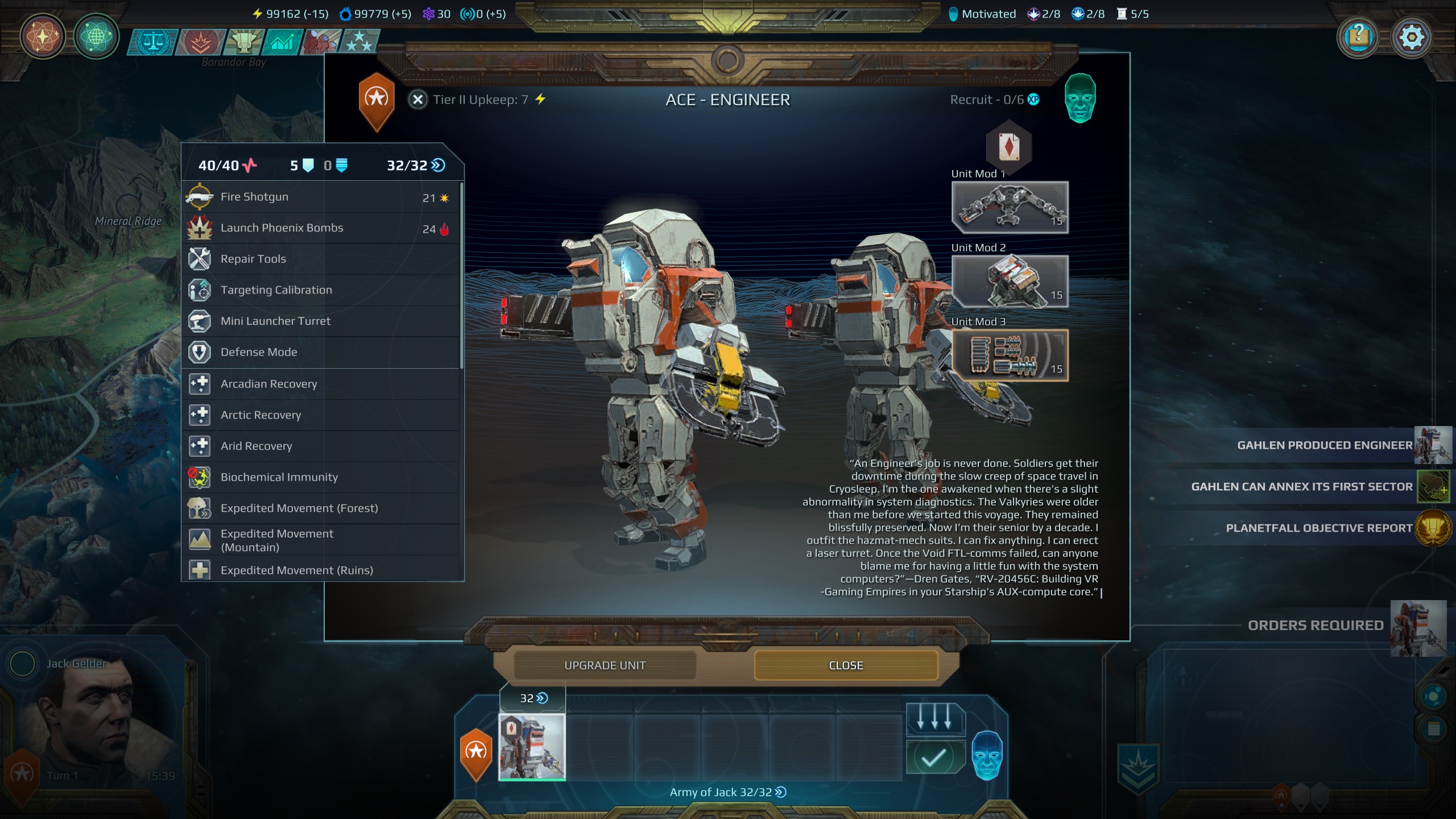 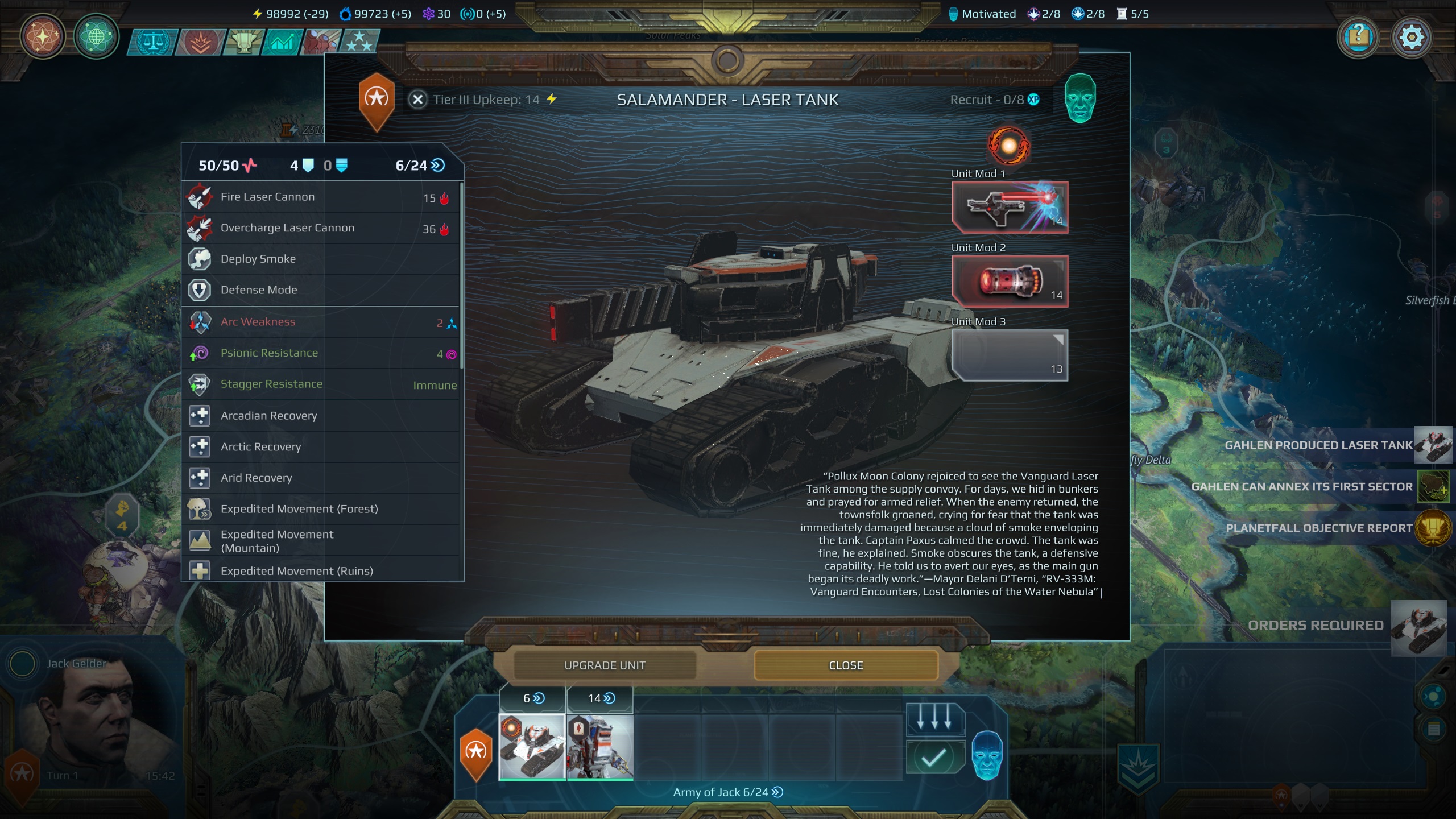 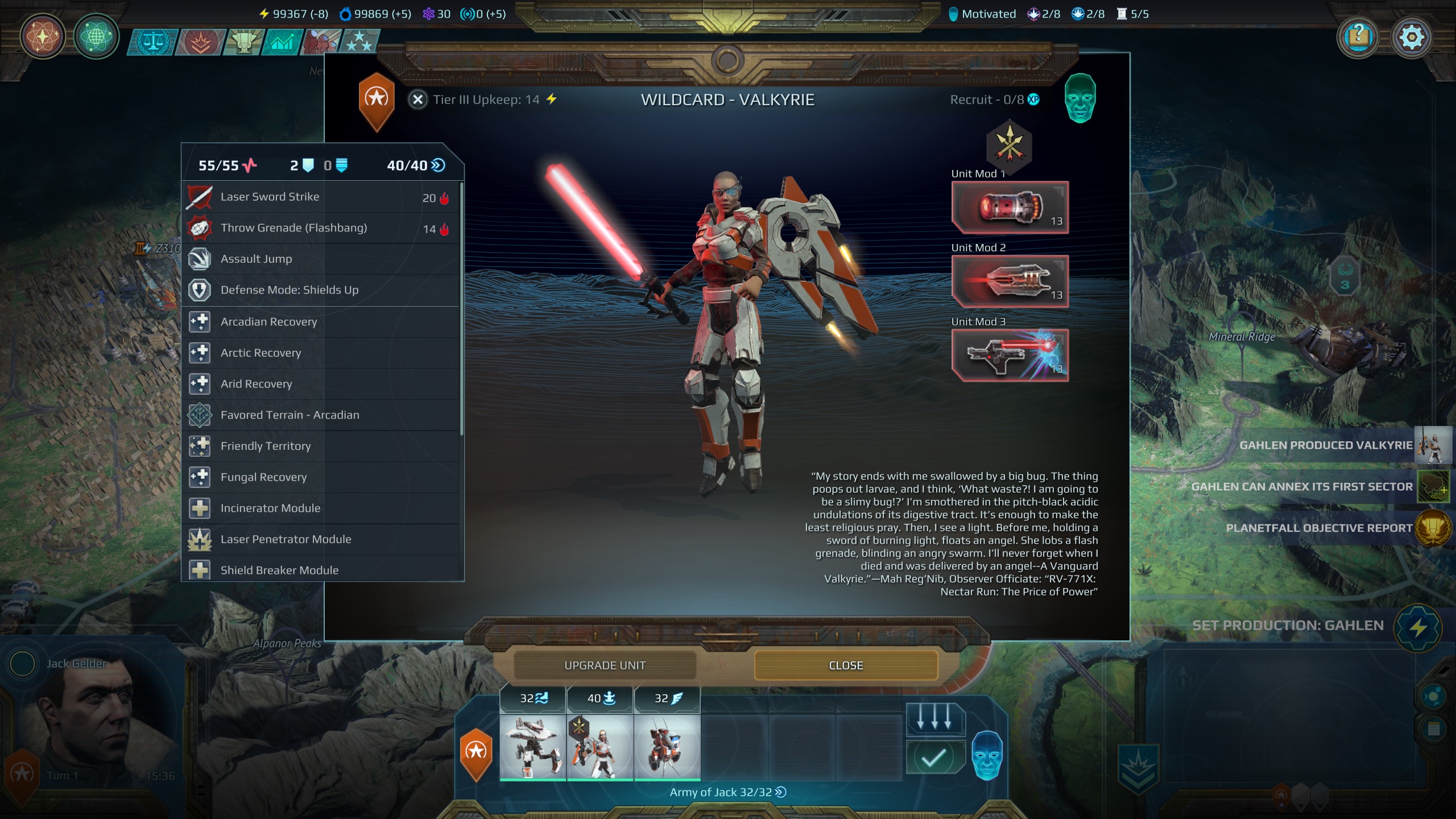 Looking good! Liking the valkyrie. Hope it got flying?

Wait a minute - do those units have unique names? Ace, Salamander, Wildcard. It used to just say Vanguard before. Are those from the mods?

TheSpeaker said:
Wait a minute - do those units have unique names? Ace, Salamander, Wildcard. It used to just say Vanguard before.
Click to expand...

LennartGS said:
These are their variant names after modding
Click to expand...

I'd actually forgotten about that. Looks great in-game, thanks Lennart!

Ah, so that's how the Vanguard "returned" - if I'm interpreting things right, hyperspace is a gate-to-gate transport, requiring that a gate either be constructed at or brought to the destination. Meaning that new systems could only be colonised by sending a colonisation fleet across at STL speeds to establish a new gate at the destination.

So what's happened is that the Vanguard arrived at a new system, rose from cryostasis, set up their Nexus gate, and then came back to the Star Union to report on their success and for a bit of leave: expecting that they'd find themselves far enough in the future that whatever made them join the Vanguard in the first place was no longer an issue, but that the Star Union would be there. Instead, they find... ruins.
Q

The engineer looks ready to topple over. Surprised it isn't extra vulnerable to stagger.

I like that unit morale and party morale are sort of different. Blue and green. Not sure which is higher though.

Valkyrie Flashbang doing fire damage is a curiosity. Either that or the resistance-check icon (like we had in AoW3) is not ready yet.

LennartGS said:
You can now choose to customize your Campaign Commander’s appearance and perks in Planetfall.
Click to expand...

This is very cool btw.

Not much to say, just beautiful. I do wish the Valkyrie had some sort of head protection. I know you want the face to be visible so the unit stands out from other Vanguard troops but an open faced "pilot helmet" of some sort could work or something similar to her concept art.

What can I say on how Vanguard units looks like:
Quadratisch. Praktisch. Gut. (not really)

And no questions from me this week .

Thank you very much. Now we're only missing the Gunship, Naval units and the Drone Carrier.

I won't lie, I prefer most of the Concept Art versions of the units more, but it's mostly due to the sheer detail that would be largely wasted on the in-game models due to the scale they are most frequently viewed at. At least the Valkyrie looks mostly the same, even if it's a shame she lost that rather interesting face-piece for just an eye-piece.

Mini Launcher Turret will potentially be quite the force multiplier for groups of low-tier Troopers and Engineers, giving all of them access to an aoe massive impact damage source, which leaves a cloud. High-tier mod, though, so it comes at a premium. It probably also can't fire the turn it's deployed, to give the other player time to possibly react against a swarm of turrets. Improved Sensors allows any unit to Overwatch and can't be Flanked, along with better Strategic vision. Thorns armor, always fun. Spearhead let's them bypass the 1-turn restriction. Heck, combined with Big Stick Diplomacy and Improved Sensors, they seem like a faction that likes to break the established rules.

It makes me excited to see what special tricks the other factions have up their sleeves to tweak or break the game rules in their own ways. Fourth (Specialty) Mod Slot? Could easily come from Assembly, Kir'Ko or Amazon, by mechanics or genetics.

Can't say much about the Engineer, aside from the fact that it appears to have its purpose as a more offense and Mech-oriented semi-Support (Repair and Targeting Calibration), compared to the other T2 Support, the PUG. Better Damage and Defenses, compared to Nanite, Smoke and ability reset of the PUG.

Laser Tank is kicking around what looks like a multi-shot and a high-powered single-shot(over double-damage, and probably other properties like Stagger and penetration), along with Smoke deployment. Slow, though, and strangely less Armored than I expected, having the same Armor rating as an Assault Bike(if they still have 4, since we haven't seen one in a while). I suppose their purpose is higher tier ranged single-target power, though, since they do more single-target than the more expensive Walker unit.

Valkyrie has some hefty multi-hit damage once she gets into melee, and the mobility to make it there(I called the Jetpack, although I wasn't quite expecting Assault Jump, but rather hoping they would have a version of Lesser Flying). You can see her unit icon has her with Floating, though, compared to OWL's Flying, so at least she has that. Very squishy(it's the lack of headgear and gloves, I tells ya!) once she gets there, but she'll definitely beat a Lancer, for what that's worth, albeit losing to a fellow T3, the Kir'Ko Ravenous, most likely. Different units for different purposes, of course, including their purpose within a faction's lineup.

Drone Carrier is amphibious, it seems, although that could technically come from a Mod we don't see.

Final observation, though. -10% Upkeep Perk, or a system-wide adjustment to unit upkeep costs? I see 7/14 for T2/3, which intrigues me.

Those are some damn fine units.

Could have done without the lightsaber though.
Toggle signature
Baal: You can't be serious.
O'Neill: Yes I can... I just chose not to.

TheDungen said:
Could have done without the lightsaber though.
Click to expand...

It'd be nice if it was shaped more like an actual sword or saber. 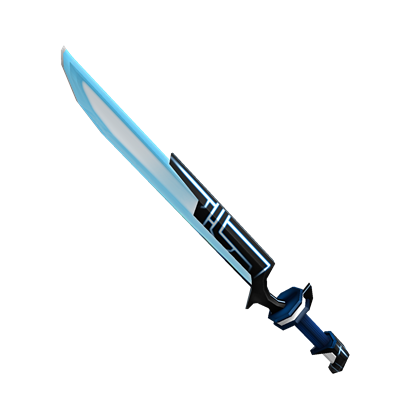 Looks like they have Assault Jump, so probably not flying. Still badass-looking though.

I'm wildly bemused by the engineer being more armored than the tank. Perhaps that's because of the mods? It isn't possible to tell what those do from here, some iconography connected to the unit mod cards wouldn't be unwelcome.

The engineer's weapon is interesting, it certainly doesn't look like a shotgun.


Jean-Luc said:
Not much to say, just beautiful. I do wish the Valkyrie had some sort of head protection. I know you want the face to be visible so the unit stands out from other Vanguard troops but an open faced "pilot helmet" of some sort could work or something similar to her concept art.
Click to expand...

An advantage of helmets is that they also help immersion by explaining why all units would look the same. It can be a bit off-putting if every unit is identical otherwise.
Last edited: Sep 13, 2018

Not currently. It has Floating/Hovering (not sure if they are going to differentiate them) judging by the movement icon. The Transcendent had the same icon and had Floating. Also, the OWL has the Flying movement icon.

Was critiqual at first, but the Vanguard actually look and read like a cool starter-faction. I just love this used Traveller-look. Time to recolonise the Union .