Jump to latest Follow Reply
Menu
Install the app
You are using an out of date browser. It may not display this or other websites correctly.
You should upgrade or use an alternative browser.
Age of Wonders: Planetfall 1619 Bug reports 1620 Suggestions 536 User Mods 93 AoW: Planetfall: News and Updates Archive 41 Multiplayer 54
Show only dev responses

Hi there, welcome to this week’s Planetfall Journal where we’ll looking closer at the Commanders: your avatars in the game world. We’ll be talking about the visual development, the appearance customization interface, but also be previewing the things they can do in the game as heroic army leaders.

Role: The Commander is the leader of your House on a world. He or she is also your avatar which you can customize as you see fit. As seen in the previous journal you pick an origin faction, a secret technology, and a number of perks. Your commander conducts diplomacy, but is also are able to charge into battle on foot or in a vehicle, befitting the type of heroic sci-fi we are making in Planetfall, so . We needed to develop a system that lets commanders do all these things as well as give while giving players enough choice to express themselves in game.

Inspiration: from Commander / Hero outfits varies per faction race. For the Vanguard (as with many items) we took inspiration from 70sties Scifi: vintage Star Wars orand the original Battlestar Galactica. There’s military clothing featuring capes, leather, and greeble covered armor and vehicles. Then there are hair styles and accessories to go with it.

Design Process In the character / outfit design process we usually go through a three-step process:

First there is the exploration phase where the artists make quick thumbnails. Here we capture the basic forms and style. (pictured: Amazon)

Then we work them out as medium detail sketches and start looking details like accessories andt meaterials, but limit the amount of time spent, so we can pick the best. (Pictured Syndicate + Amazon) 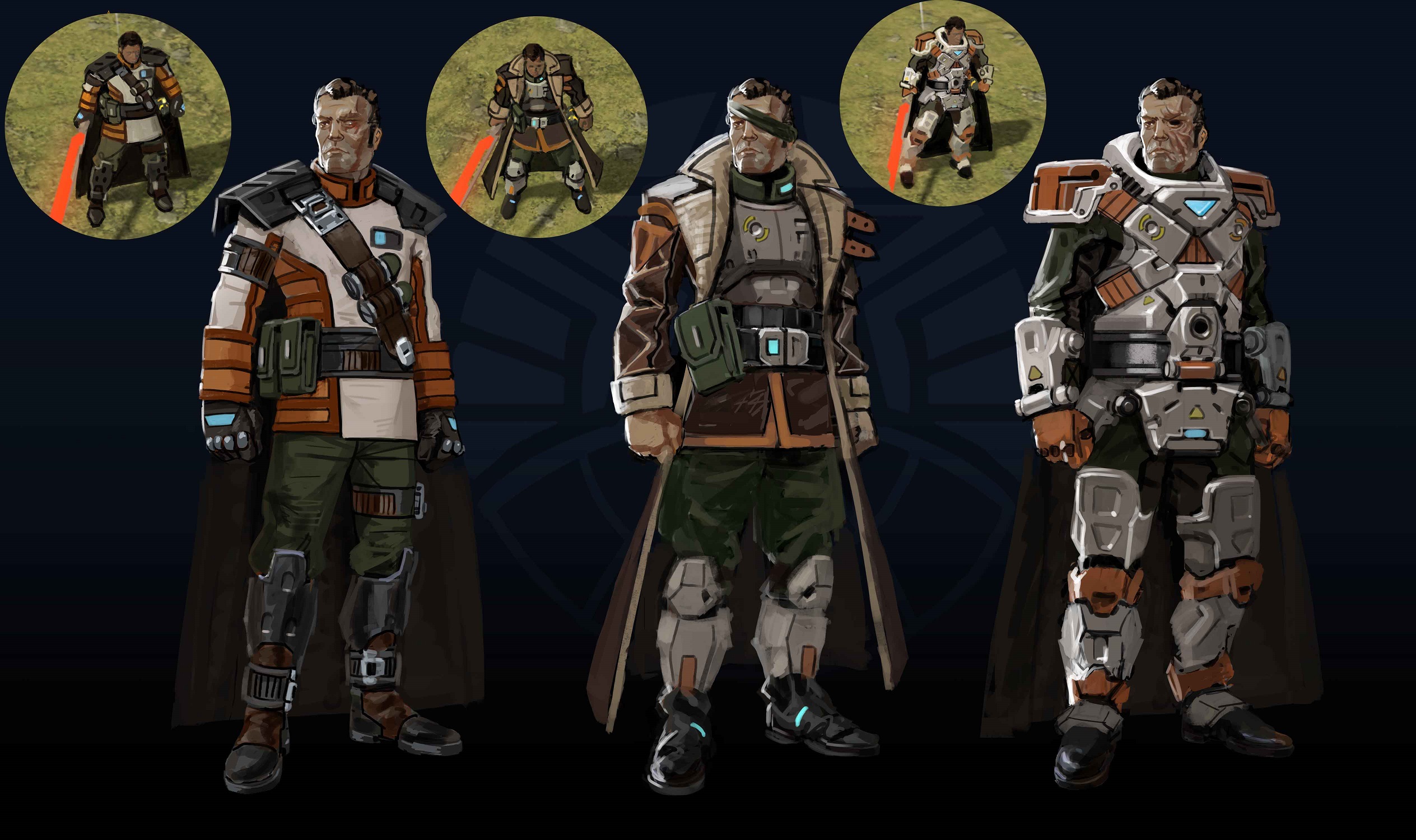 In the final concept phase we detail the pieces so they are ready to be visualized in 3D by the 3D Artists. Throughout the process we keep in mind that the characters look good in both portrait mode as well as on the map as small figures. (Pictured: Vanguard art by Rich)​

Modularity: We design all outfits to be modular. In AoW3 outfits were based on Class. With Planetfall we made to decision to theme outfits primarily on races (Factions) rather than classes (now Secret Techs). This makes the rich background and culture of the factions more apparent in game. It means there needs to be a good variety of outfits with a faction. Pieces vary from lighter cloth to heavy armor. The Planetfall customizer allows you to mix and match clothing pieces now; outfits are split up between Torso, Legs and Cape; in addition to head accessories.

Here is an example of how two Vanguard ladies can vary (3D art by Robin, Baiba and Allert - Poses by Jill and Michiel): 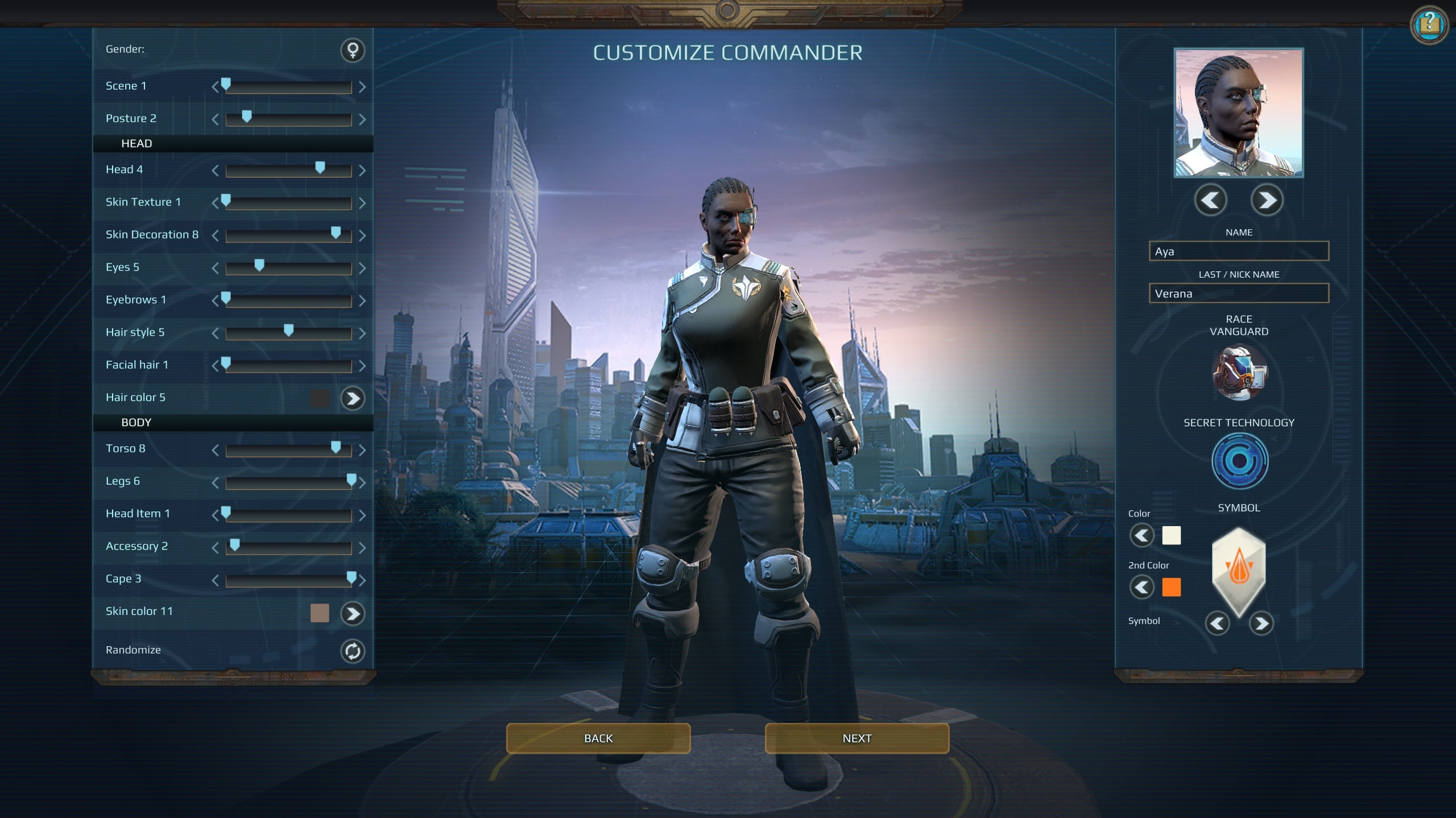 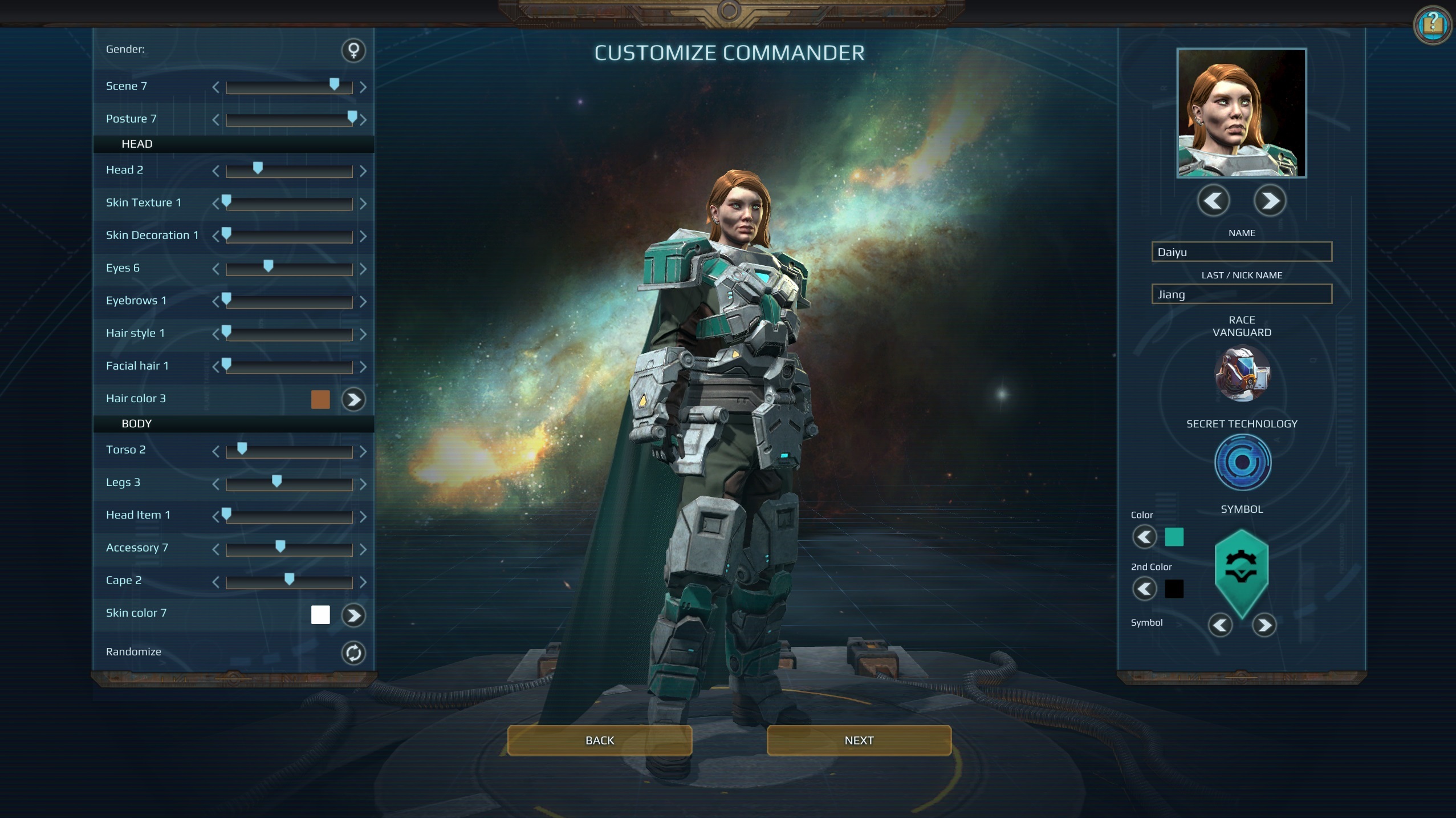 The fidelity has increased tremulously compared to AoW3 see Arno's earlier Journal about the engine.

Character Model Usage. After you have a created your character you’ll see it in a variety of scenes, including diplomacy, the unit panel, and TCin combat, and then there isthe mission briefing scene before planetfall.
As your Commander and heroes gain battle experience, they can be upgraded with personal combat skills. We use a free-form skill-based approach; where skills originate from a general pool as well as unique ones coming from the hero’s race and secret tech.

Although the system is free-form you are advised to develop a particular Commander or Hero in a particular role. Like you can be more of a support character, a ranged specialist using sniper rifles, a daring melee champion or a vehicle pilot commander that increase the efficiency of other vehicles.

These various roles require Commmander Character Models to be flexible in game. In Planetfall Commanders are able to ride vehicles; you might see your Commander sticking out from a tank turret hatch, sitting on an assault bike or mounting some an alien beast. Here is Daiyu sitting on an Assault Bike and carrying Void Blades. 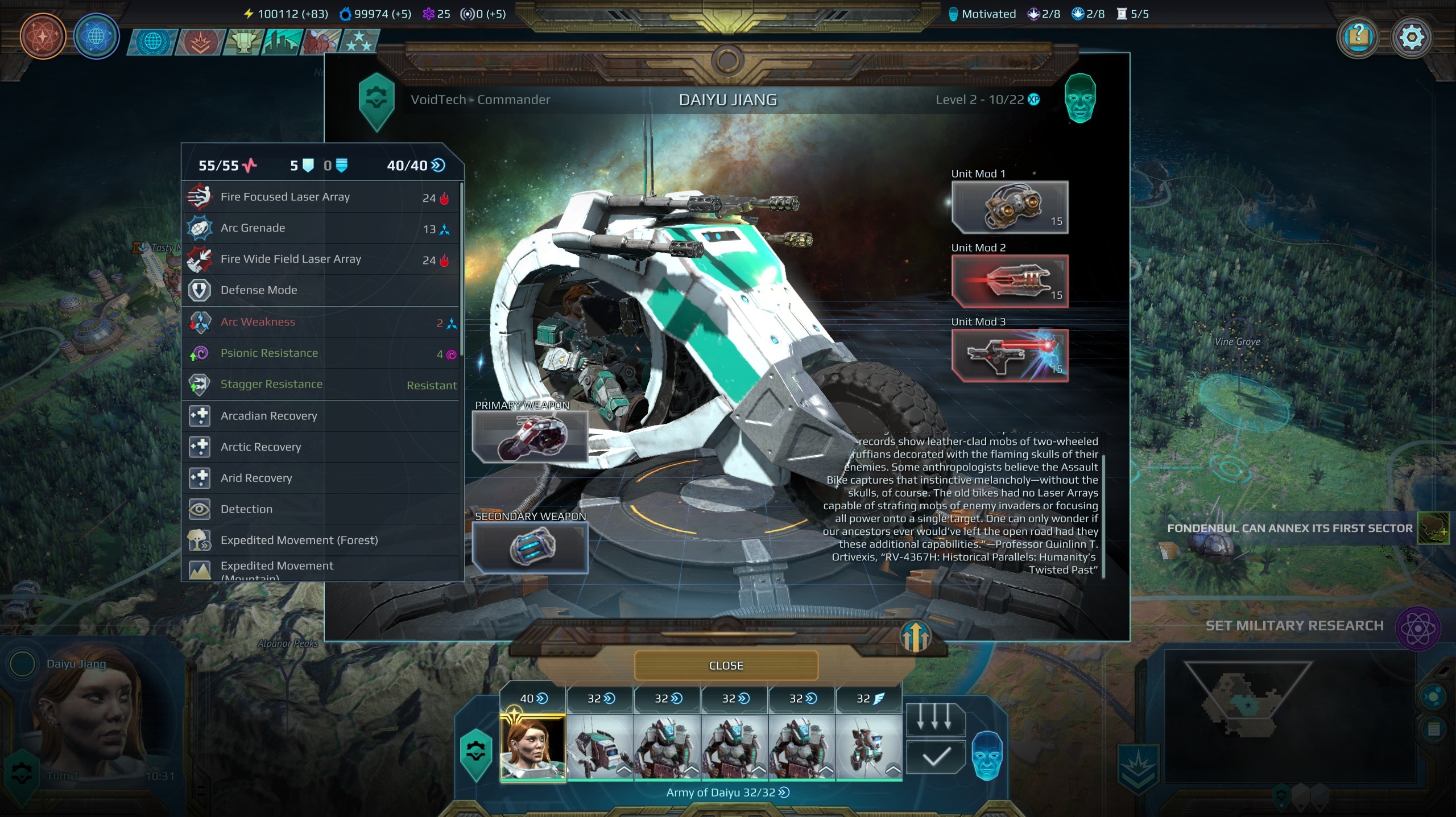 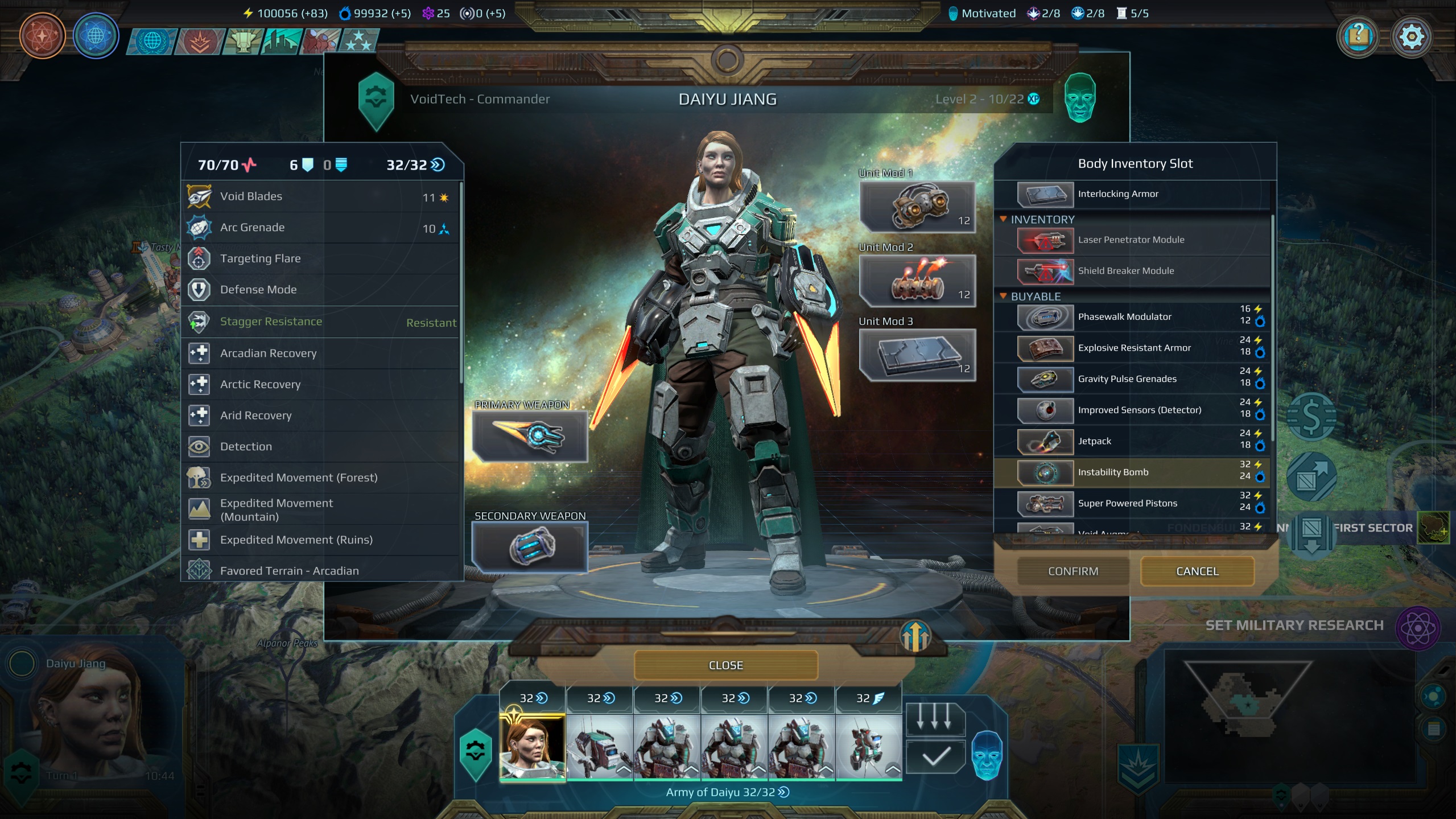 Stay tuned for a special Planetfall announcement tomorrow afternoon - we've got something cool in the works!

As far as mods go. Do they have to be purchased after being researched, or is the buyable section of that screen something separate from researched mods?

This is all looking very good guys, well done!
Very happy to see such stylish designs for all the factions

Dr_K said:
As far as mods go. Do they have to be purchased after being researched, or is the buyable section of that screen something separate from researched mods?

Standard Issue Mods coming from Research can be bought from the arsenal, similar to regular units.
Then there are unique Hero Items which can be found in the field and can only be used by Commanders and Heroes.

Can we get some of these leader pictures as forum avatars? Especially the Drill-hawk one.
Toggle signature
“When I became a man I put away childish things, including the fear of childishness and the desire to be very grown up.”
C.S Lewis

Great to see all the options come back in even more detail. I've a feeling the Amazons have been listening to an alternative version of the Joe Cocker song called "You Can Leave Your Shoes Off".

Making a support hero and putting them in a vehicle to compensate for the lack of combat ability seems like a good combo unless unlocking stronger vehicles/mounts requires significant specialization. Does use of vehicles and mounts alter heroes' hp and armor or just speed and attacks? It seems tricky to balance pilots vs foot heroes in that regard. Although the bikeless Daiyu does have 70hp vs 55 of the "mounted" one and both are lvl 2. Foot version also has an armor module (also increases hp?) while the bike version is limited to vehicle based mods? Would a bike using hero also inherit its "exposed flanks" vulnerability for example?

Great stuff regardless.
B

Jean-Luc said:
Making a support hero and putting them in a vehicle to compensate for the lack of combat ability seems like a good combo unless unlocking stronger vehicles/mounts requires significant specialization. Does use of vehicles and mounts alter heroes' hp and armor or just speed and attacks? It seems tricky to balance pilots vs foot heroes in that regard. Although the bikeless Daiyu does have 70hp vs 55 of the "mounted" one and both are lvl 2. Foot version also has an armor module (also increases hp?) while the bike version is limited to vehicle based mods? Would a bike using hero also inherit its "exposed flanks" vulnerability for example?
Click to expand...

When a hero gets into a vehicle, they "become" it, as far as a lot of the game is concerned. They lose a lot of personal traits, and gain those of the vehicle, including all its stats, abilities and passives (so yes, the bike would give you exposed flanks). Heroes skills all work while you're in a vehicle, so if you take a health boosting skill, then your vehicle will have more health too. Same for damage boosts and such.

The vehicle goes into the primary slot, so it cannot be combined with things like rifles and melee weapons. The secondary slot remains free though, so the hero can still use items like pistols and grenades from inside the vehicle. As for miscellaneous items (i.e. mods and special hero items that go into the mod slots), it's a bit more complicated. Each mod has a set of requirements which limit which units can use it; only infantry can use bionic legs, for example. So, when the hero (who is biological, infantry) gets into the assault bike (which is mechanical , heavy) they lose access to things like jet packs and bionic eyes, but gain access to things like built in targeting arrays or heavy armor plating. With regards to the special hero items you find in the world, about half of them require the "infantry" trait, meaning about half are incompatible with being in a vehicle (though a couple of vehicles do actually count as infantry).

As a last bonus, when a hero is in a vehicle, it acts a bit like an extra life. If the vehicle is destroyed, the hero will survive and can continue fighting on foot (though without a primary weapon equipped). At the end of combat, the vehicle is still dead though, so you'll need to buy them a replacement.
Q

The mods are numbered (all 12s in the last image, all 15s on the bicycle). Are the mod levels linked to specific research?

That number indicates the number of alternate things that can go into the slot. So the 15 means there are 15 other things that could be there instead of the selected one.

Very nice. This game is shaping up really well. Keep up the good work.
Toggle signature
"The Nation that makes a great distinction between its scholars and its warriors will have its thinking done by cowards and its fighting done by fools."
-Thucydides

Really like how customarily the heroes and faction are while still keeping a strong lore background. Looking forward to customizing my first commander and set foot on a new world.
Toggle signature
Gamers are young at heart and creative thinkers. Shall we play a game?

Just what I wanted to know, thanks Tom.

This is looking better and better by the day. I can't wait.

Edit: Will there be a way to generate a random commander?

I wish we could see some gameplay footage, though. Maybe 10-15 minutes' worth? (Unlikely, I know, that's not Paradox's style, but I can hope.)

Where will the announcement be? Here or somewhere else?

Destrada said:
Edit: Will there be a way to generate a random commander?
Click to expand...

You can randomize an appearance.


Juris Docta said:
Where will the announcement be? Here or somewhere else?
Click to expand...

Here, and the the rest of the Paradox social reach I presume
G

They look great! Aow3 is one of my favourit games but for me the hero character upgrade system was the low point since I always built my heroes the same way for each class. It would be fun with more choices like mutually exclusive upgrades. for instance you can´t get the very strong upgrade together with the agile upgrade or melee expert together with sniper expert.
G

I liked the hero mod for AoW3 where the new heroes all started with a special skill from outside their class or a mount or special equipment. Something that made them stand out and give more character compared to all the other heroes of the same class. More of that please.

Tombles said:
As a last bonus, when a hero is in a vehicle, it acts a bit like an extra life. If the vehicle is destroyed, the hero will survive and can continue fighting on foot (though without a primary weapon equipped). At the end of combat, the vehicle is still dead though, so you'll need to buy them a replacement.
Click to expand...

My initial impression of the destroyed vehicle mechanic seems that it might be OP if the leader/hero has no penalties (beyond being a non-vehicle now) after the vehicle is destroyed. However, it might be with all of the new combat mechanics.

I'm not 100% sure right now, but I believe only incompatible mods would get disabled and the player will keep the health bonus from their skills.