Menu
Install the app
You are using an out of date browser. It may not display this or other websites correctly.
You should upgrade or use an alternative browser.
Age of Wonders: Planetfall 1514 Bug reports 1527 Suggestions 529 User Mods 78 AoW: Planetfall: News and Updates Archive 41 Multiplayer 53
Show only dev responses

Hi there! and welcome to the first Age of Wonders: Planetfall development journal. From here on, the team at Triumph will be giving you weekly updates on our progress and revealing details of the game along the way.

Join us at the Paradox Forums: First a request to the AoW3 community: we kindly ask you to join us here on the Paradox forums, as the old Age of Wonders ones will be closed down later this year. This way Triumph can spend more time making games and less on fighting spam-bots. Please create your account here.

Inspiration: By Gandalf’s beard - A sci-fi Age of Wonders? Yes - It’s been a long-standing wish from many of the team to do something with our love of sci fi: Starwars, Dune, Fallout, Starship Troopers have all been an inspiration in one form or another. We feel our beloved war-focussed 4X game formula is a great fit for sci-fi themes - and futuristic weapon arsenals. At the same time, nothing gets the creative juices flowing like a new setting.

Premise: As one of the heirs to the shattered Star Union, you emerge from a cosmic Dark Age to craft a new future for your people. You travel to one of the many lost worlds of the old empire, where you will find marvels among the remnants of this once great civilization. You will need to develop / rediscover technologies and social doctrines for your colonists to thrive on these hostile worlds, for you are not alone here. Other houses compete with yours to rebuild the Star Union, and you will need both a carefully crafted arsenal, and a firm grip on diplomacy if you are to have a chance at victory.

Our Goals:
There is nothing that reflects the fusion of the gameplay and the setting better than the unit line up. So here is one in pre-alpha state for you: A Vanguard Liberator with Flechette Ammo and Jetpack mods called the Screaming Eagle. How would you name this unit variant? 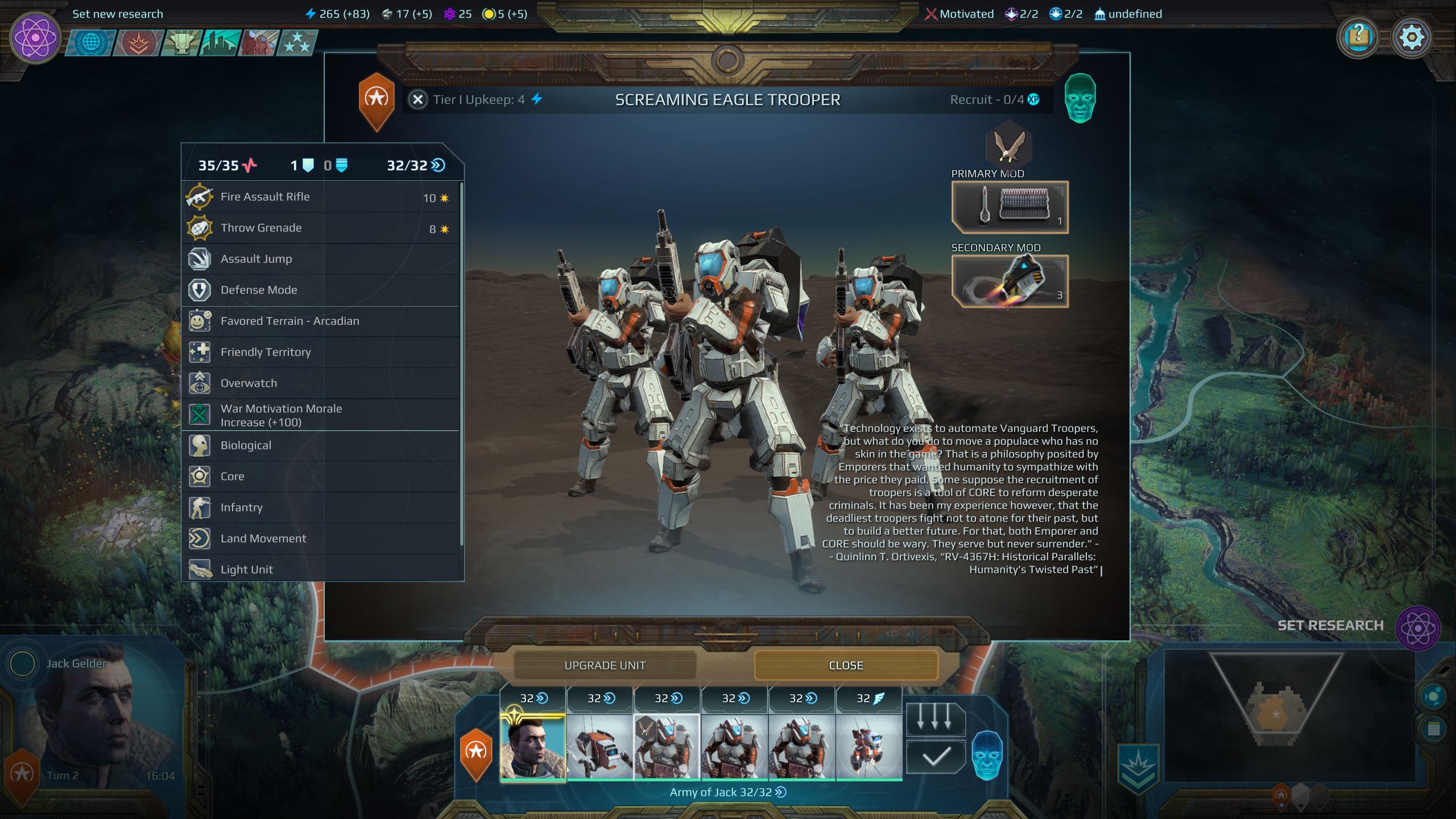 I like how a simple Tier 1 unit already has two ranged attacks - I presume the Assault Rifle will hit up to three times like in prior games, while the Grenade will be AoE. Should make for some nice diversity!

Yay for Dev Diaries!
Toggle signature
"Agreed. We need elephants in the seduction schemes."
By Razmorg

Nice to see the dev journals starting and on a weekly basis no less!

I'm also very happy you keep mentioning the lore and setting. The setting and story of the original AOW are what drew me in in the first place those many years ago. No matter how good the combat mechanics are, if the story and setting are lacking I'll never get hooked to a game. So I'm looking forward to next week's blog and hopefully many more on the story and history of the setting and all its races!

Thx for the DD. Great to see AoW in space.

Let the spice flow
Toggle signature
I was imagining Petrarch sobbing whilst a mad Irishman hacked repeatedly at the corpse of Nigel Farage, mutilating it still further. Meanwhile, an Ulsterman dressed entirely in orange yelled that the Irishman was actually English, and less Irish than him. - DoomBunny
To be honest I kinda like being a woman. - Lord Finnish
I have the social capabilities of a carrot - LYNCHY
War is dark and full of horror. But there's an unshakable tinge of honor and glory from time to time. - DarthShizNit

I would call them the Flying War Crime Squad.
But seriously I like modability in my troops arsenal, so this looks good...
Toggle signature
Thorbjorn42gbf:
I love how basically all the rest of the worlds gamers go "My god more dlc's? why?" while people playing paradox games go: "YES DLCs EXPANSIONS GIVE ME NOW"

Picked up AOW3 during the recent Paradox sale and am enjoying it. Looking forward to hearing more on this.
Cheers.

Nice first installment, looking forward to many many more!
Toggle signature
Gamers are young at heart and creative thinkers. Shall we play a game?

That makes me happy !

Troop progression is one of the most rewarding aspects of modern 4x games -and aow3 did this better than most.

No cap on max lvl. please. Even if champion lvl. 27 is mostly cosmetic, its what makes it that much harder to cope with loosing a faithful companion unit

For all those dissapointed it does not involve magic, look at it this way, sci-fi is like fantasy in space, where advanced tech is like magic.

As for the unit name, screaming eagles seems very appropriate, i cant think of anything better.
Toggle signature
​

Yes people get attached to individual units. We see the importance of leveling next to the ability of adding mods and giving them names. A personal little wish is logging feats for individual units. "Killed a hero" "Protected the Capital" etc. Maybe we'll get to implement that one day.
Toggle signature
Lennart Sas
Director Planetfall, Managing Director, Co-founder @ Triumph Studios
Planetfall Development Diary List
Follow me @ Twitter

The machine-god is pleased with this offering.

Oh, really nice to see the first DD is already here!
Love the concept of giving basic units those mods. That should make for a lot of variety.

As for naming... hmm...
First thing it reminded me off is my good old jetpack lemming back in the Lemmings days. Those things were so hard to fly, yet so much fun.

I really like these graphics. With the political-historical quote it has even some kind of Dune-flair. The concept of unit mods seems to fit extremely well too.

Will a name like "Screaming Eagles" be assigned automatically because of the mods it uses? Or is this meant as an example of being able to (re)name units yourself? I am assuming the former and that is also the reason it has this little eagle icon.

LennartGS said:
Yes people get attached to individual units. We see the importance of leveling next to the ability of adding mods and giving them names. A personal little wish is logging feats for individual units. "Killed a hero" "Protected the Capital" etc. Maybe we'll get to implement that one day.
Click to expand...