A Suggestion for Improvement: Diplomacy & View

Jump to latest Follow Reply
Menu
Install the app
You are using an out of date browser. It may not display this or other websites correctly.
You should upgrade or use an alternative browser.
Imperator: Rome 8721 Bug Reports 3608 Suggestions 2349 User Mods 605 Tech Support 486 Multiplayer 55 After Action Report (AAR)

This mostly contains photoshopped images of suggestions to improve visibility.

This suggestion is greatly influenced by some clever design choices from the "1.3 Better UI" mod.

Single events like this is much cleaner if we remove the wall outside the scroll.
Looks better too 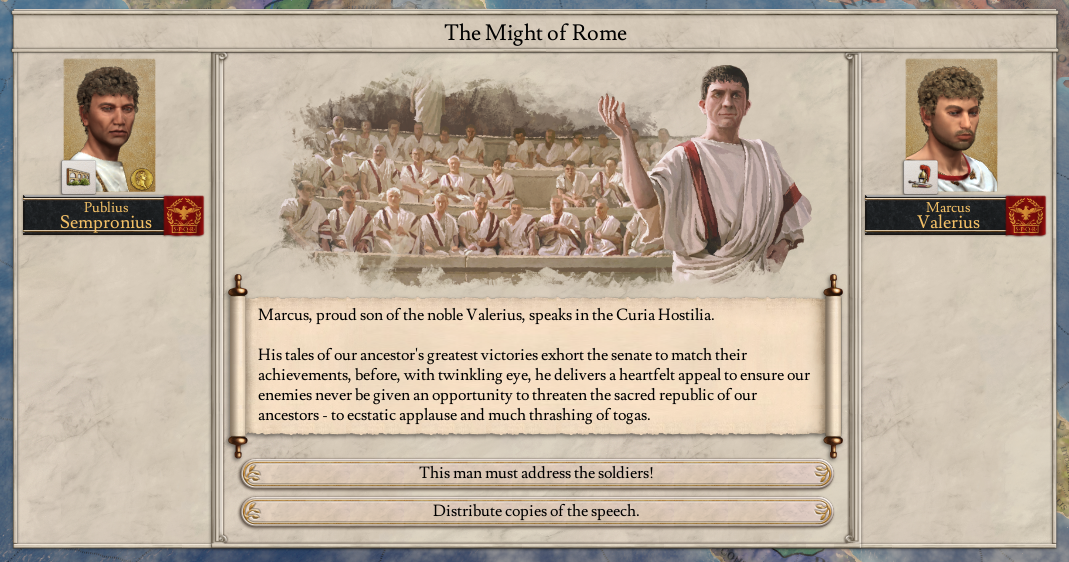 Events like this should have both characters on the same side, thus reducing the size of the event. Especially if they are from the same country.
Events with more people in it might prove more difficult - But I still think they should be redesigned. There is soo much useless blank space everywhere.

I think in overall there is way too much lines going everywhere.​
Added:
1. Colour theme to the buildings - easier distinguishable.
2. Clickable buildings - Left click on the building icon to build the same building. Don’t need to enter the Build section
3. Destroy buildings - Right click on the building icon to destroy it. Don’t need to enter the Build section
4. Added so you can see if your city is a city and the much easier possibility to upgrade or degrade instead of going into the build section. (Could be done better than how I did it in the picture. The city/town status with a simple negative or plus sign with it would be enough.)
5. Added the Civilization building in the Domestic section to be clickable.
6. Added Pops happiness %.
7. Added Percent to Culture, Religion and Pops in the Province View. Looks much better and you don’t need too hover over them to see it.
8. The food sections have been merged. It never made sense to have them divided into 2 sections.

Removed:
1. Removed many of the unnecessary lines in the Pops section. It looks way better.
2. The clickable “Pops” and “Build” buttons. It’s unnecessary because we could only make the black line “Pops” and “City Buildings” clickable instead - saving space.
3. Removed the unnecessary picture design on the Civilization in the Domestic section. When thinking of saving space - making the interface better, it is not needed. Especially when that “40” sign with it explains just what the clickable button did before

Others:
All buildings should have a clear purpose. Currently there are some very good ones, some decent, and some you never ever want to build. It is unbalanced.
Trade needs to be worked upon - I have no comment there. 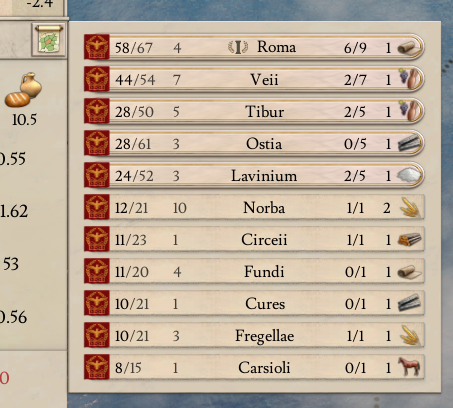 Although I never use this view in Vanilla, I might if it had been as useful as this. Actually, just add this. It shows much more information and is more effectively used.


Diplomacy​
Added:
1. Rearranged the main menu. Looks better and is more effectively used. (The icons for opinions on others and on ourselves should be changed. Not easy to see which is which.
2. Added a button to the top-right beside the exit button. Allow to close the tab on the right as its rarely used in the game.
3. Added the maximum amount of allies to the main menu.
4. Added to search for your vassal countries on the right tab.
5. Added button to allow to see more countries if you want.
6. (Maybe add your Diplomatic stance to the main menu as its often used/seen?)

Removed:
1. Lots of useless space. The new diplomacy tab is smaller & prettier
2. Vassals/Feudatories should not be allowed to have an opinion when you declare war. How actively they are in the war is another matter. Currently they say no to declaring war, but still helps out 100% anyway and is as such very misleading.

Diplomatic Stance​
Remove the “Diplomatic Stance” pop ups on the map - Not interesting and does not help me in any way. And it happens all the time especially early in the game.


Characters​
Added:
1. Moved the Father/Mother line to the top as that makes much more sense.
2. The different sections that are not in use are weakened out - making it much easier from a single glance what has something in them.
3. Favorite a character that is of special interest
4. Added an icon that replaced “Age” and is smaller. (The Icon is from the previously mentioned mod)
5. Added a plus/negative sign on easily determine if the loyalty goes up or down.
6. Added a tab to enter the options/decisions to choose between. Making it more easily to make the tab smaller - not unnecessarily large (That tab could size with the amount of options available)

Show the Character stats like this on all jobs. Makes it much easier to see from a glance who would suit that office better. Perhaps add the icon of a skill besides it to make that part more clear.


Multiplayer​
Show which player have paused the game, and a clock ticking down until all players can unpause.
Last edited: Mar 16, 2020
Toggle signature
CK2 mod Author - Dynamic Cultural Titles (Ironman)

glennandre22 said:
Events like this should have both characters on the same side, thus reducing the size of the event. Especially if they are from the same country.
Click to expand...

Showing the ruler seems redundant if he is not directly involved. If you wnat to reduce the scroll size, remove him and leave only the other character.


glennandre22 said:
2. Vassals/Feudatories should not be allowed to have an opinion when you declare war. How actively they are in the war is another matter. Currently they say no to declaring war, but still helps out 100% anyway and is as such very misleading.
Click to expand...

A disloyal feudatory should be able to refuse joining a war, but this should give the overlord a casus belli on them. This should be a radical step and usually lead to the puppet starting a war of independence on the overlord.


glennandre22 said:
The Icon is from the previously mentioned mod
Click to expand...

Isn't this the age icon from the list of charcaters already in vanilla?


Ketchup & friends said:
Isn't this the age icon from the list of charcaters already in vanilla?
Click to expand...

Idk honestly. I have just seen this from the mod. Might be just that I have missed it. If this is the case, then my comment there is invalid.
Toggle signature
CK2 mod Author - Dynamic Cultural Titles (Ironman)

- Be able to ransom characters
- Characters that belonged to the nation you conquered should not be able to ransom back if your allies arrested them
- Improve the Move Pops interface
- A Character Finder - Like in CK2.
- Add a Religion Symbol to give Religion a little bit more spice in the Character (and others) Tab.
- A Wikipedia Link like in Ck2, or just a symbol for “This is a Historical Character” for Characters would be much appreciated for history geeks - Although it is not important.


Traits​
Imperator Rome Traits are very underwhelming and needs more impact in order to care more for the Characters.
Almost all Traits are +1 or -1 Stat change and 1 good or bad modifier. Have more Traits give more than only 1 Stat change. That’s what we REALLY see.
For example: Confident, it makes sense to add more Popularity. Maybe pluss Charisma too. Or Aggressive could get minus Charisma or Finesse.
Characters can be born with 3 Martial instead of 9 Martial, and have Traits as deciding factor if he ever get to 9 Martial or not. Kinda like CK2 Does it most of the times.
Toggle signature
CK2 mod Author - Dynamic Cultural Titles (Ironman) 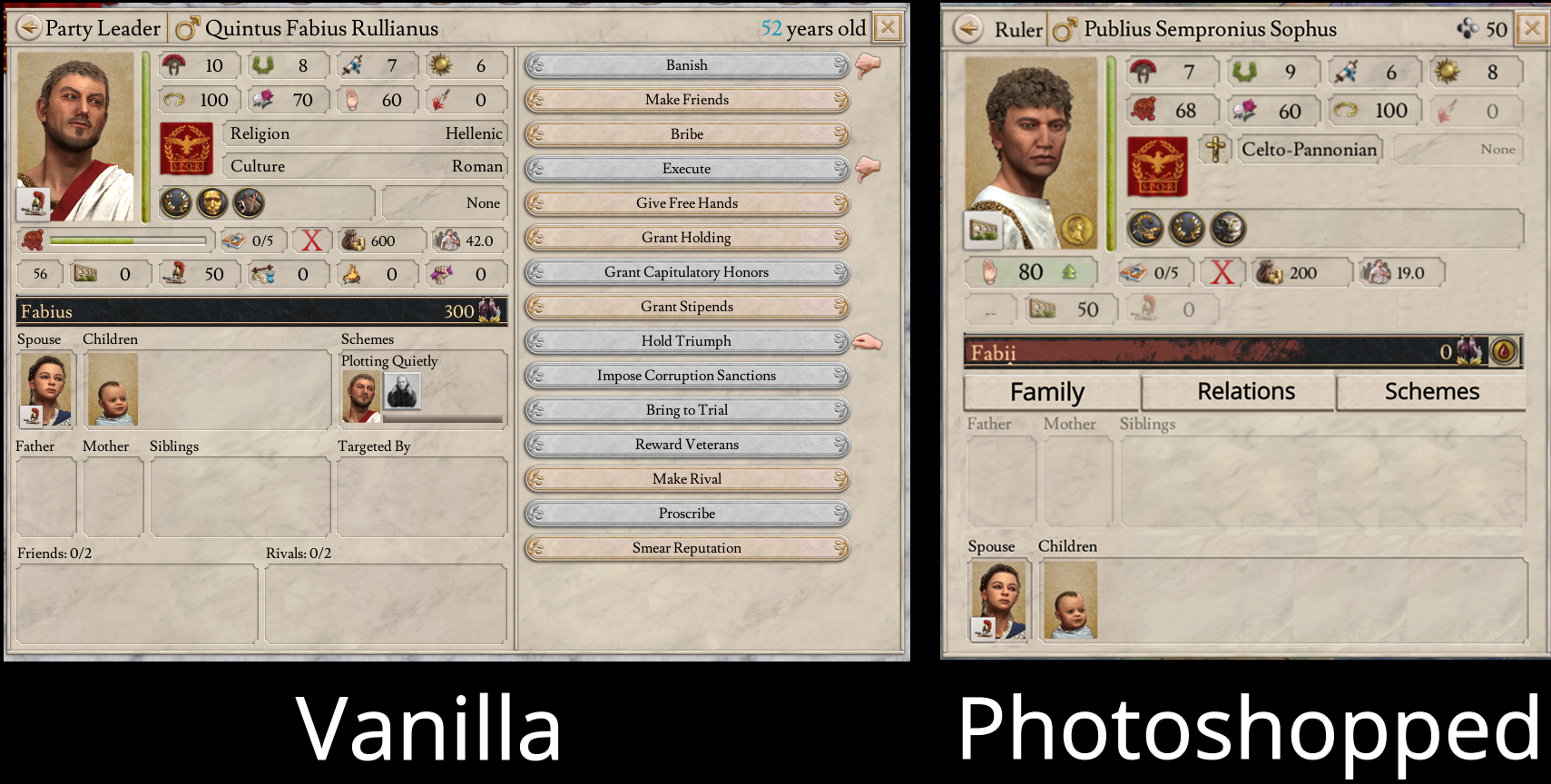 (Disclaimer: Although the Photoshopped picture looks bigger, it is of the same scale. I have not scaled anything up or down)​
New Interactions 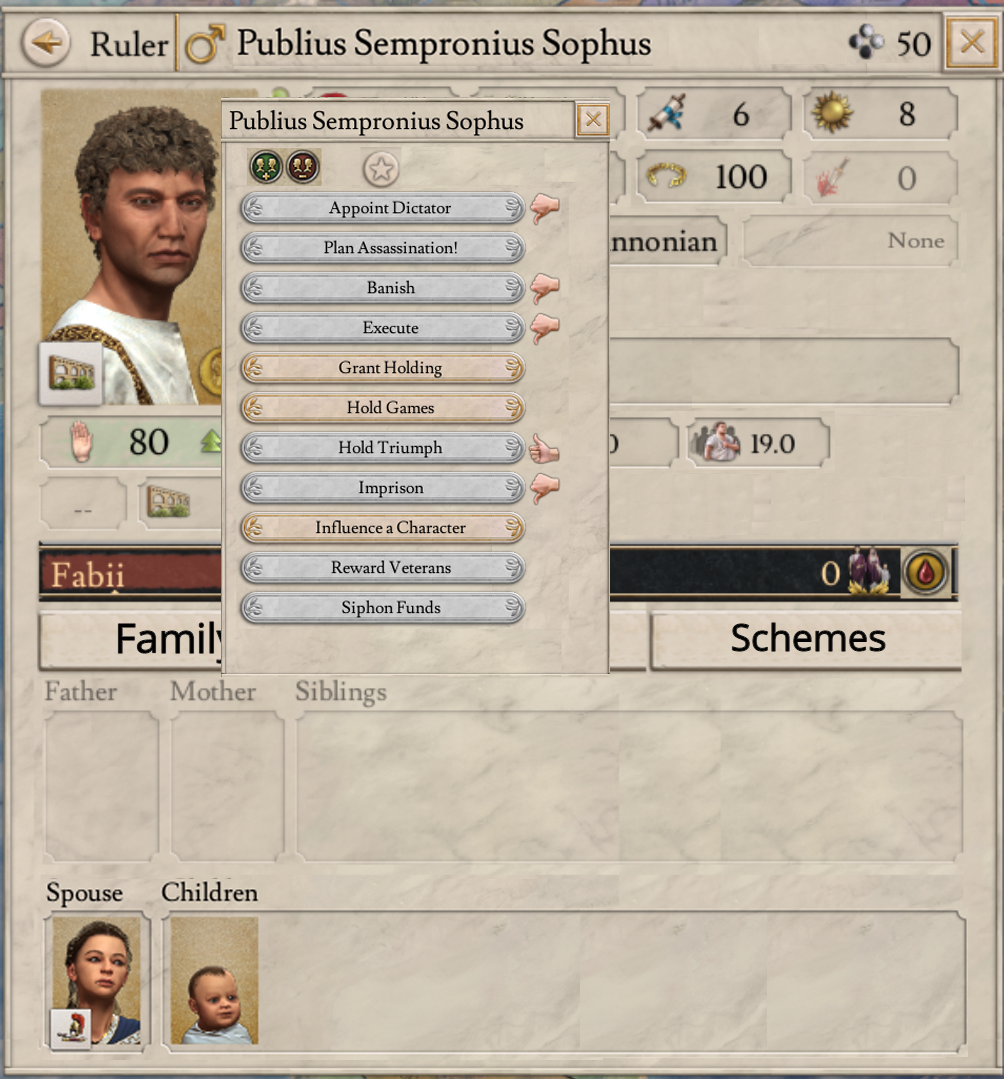 I agree with everything mentioned above, apart I would add these 3 things:

2- Education system: We should be able to educate our heirs in the event of a monarchy or provide philosophical spaces so that the families of the Republic could automatically educate their children. In the case of the tribes I suppose that there could be some education related to the priests or nature (religion depends).

3- Philosophy: This era was related to different philosophical movements, it would be good if this were represented in some way. In the case of the tribes the priests or certain groups practiced as teachers. Something like that would be fine. This section would be closely related to the previous section.