A Storm from the West: a Sunset Invasion AAR

Welcome back indeed.
Expand signature
To view is human, to comment is divine.
"Be not afraid" - John Paul II
"The Christian way has not been tried and found wanting, it has been found to be hard and left untried" - GK Chesterton.
Current AAR: The Thorn of the Rose HoI4 The Future of the Red Lion Stellaris (on hold) Journal of the Silver Daggers Battletech
Completed AAR: In Memory of France EU2 Pax Humanitas Stellaris 1.4.1 A VictoriAARn Education Victoria II 3.2
The Great Trial Stellaris 1.9.1A Game for Lisan: Belgium EU4 1.25 Account of RCAF Bomber Command HoI4
Other AAR: Entering the First Court - Kanem Bornu EU4 1.22
View my full AAR list at The Inkwell Red Special Cookie ●
This line is necessary since the forum re-work to enable the links in the last line to be used.

"The road to hell is paved with good intentions."
Tempus et mort vincent omnia - Time and death conquer all
Reactions:

Am waiting for Maya-christians to take over

Good to have you back


""Furthermore, I consider that Victoria 3 must be released"​
Chapter 3.20 Traitors and Loyalists Part II, 424 CE New

Two armies stood in front of each other in the desert valley surrounding the oasis of Menshke and if the first Mayan kings that conquered these lands saw the warriors preparing to fight the decisive battle on this war, probably they would not had recognized them as their own kin as each of them had developed their weapon and equipment following the styles of the people that they had conquered over more than a century, Southerners and Northerners were no longer Mayans in the traditional sense, but something else.

The southerners, led by the Houses of Oncan and Calakmul had expanded the Empire towards the south for the past century and adapted themselves to desert warfare, they don’t only spoke a language that mixed the Mayan with the Berber languages, they also looked like them, they were also better adapted to the hot desert climate and for that reason they had been fleeing towards this place, the Oasis of Menshke was a favorable terrain for their fighting style.

Meanwhile, the Northerners had begun to use the falcata, a sword typical of the Iberian peoples and no longer wore the Mesoamerican padded armor but one adopted after the fights that the Imperial forces had against the Germanic peoples that for almost 100 years had tried invade the Empire. The language of those loyal to the Jade Throne had also changed, adopting Iberian, Phoenician and Germanic loanwords.

Chac Oncan, leader of the rebel forces watched the scene from the safety of a hill, his men were about to deal the final blow to the decadent Q’uk’umatz dynasty and he had his messengers ready to carry out the orders of the day, alongside him were his allies.

​
The desolate dryness of the desert would be the tomb of House Q'uk'umatz and the decisive point from where House Oncan would rise to replace it. Chac Oncan had everything prepared, this war of independence would be followed by a war of usurpation ... for a long time the southern houses had endured the decline of the Q'uk'umatz and after Ixbalanque had given greater autonomy to the Phoenicians and allowed the continuous Mayan-Christian revolts of the east it was made clear, it was time for a stronger house to take the Imperial throne. It was either that or the total annihilation of the Mayans.

The Berber cavalry loyal to the Oncan threw themselves on one of the flanks of the Imperial forces applying a hit and run tactic then retreated a few dozen meters before launching a shower of projectiles on the exhausted Northerners. Meanwhile, in the center of the battlefield the Elite of the Imperial forces who were wearing chainmail and furs from Barbary lions shouted:

- For Buluc Chabtan, for the Kuhul Ahau and for the Empire !!! - While trying to penetrate the ranks of the Oncan without much success.

Chac saw how many of his men fell to the ground as if lightning had struck them but they resisted the attack and continued the fight without abandoning their position. The battle took hours and although he did not doubt about his victory, he knew that after this battle he would have to wait at least a month to continue his war, the men would need to rest, visit their families and recover for the long march to New Tikal to take the Jade Throne of the Mayan Empire for himself.

Suddenly he saw in the distance a scarlet-robed Imperial priest blowing a battle horn.


The sound echoed in the desert sands and made his heart feel a little anguish without him knowing the reason for it. He soon learned why: a large Berber cavalry force appeared from the east charging towards his position, apparently Imperial gold had bribed the untrustworthy tribes that in search of their own freedom had betrayed the independence cause to support their oppresors. House Oncan had tried to rally the Berber tribes under their banner but these tribes only were loyal to themselves. 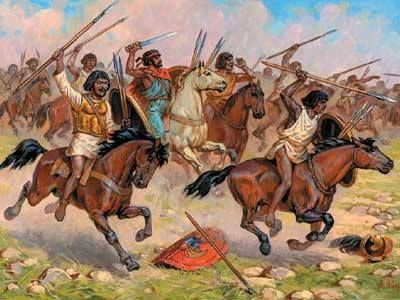 Numidians, Mauri, Berbers, the true lords of North Africa at this time even under Mayan rule.​
Soon his forces had been outnumbered and the Empire's infantry tore through the ranks of the rebels like a hot blade slicing through butter, all the rebel nobles were captured and most of their forces routed towards the open desert trying to flee the massacre.

The last member of the House of Palenque a noble line that had ruled men since the old times, when the city-state of Palenque was founded in the Mayab and that was loyal to the Mayan cause even after the fall of the First Mayan Empire walked upwards guarded by two priests, he had betrayed his Kuhul Ahau because he believed that the Imperial line had been abandoned by the Gods and wanted to preserve his culture and faith in this tumultuous times, he failed, and now he would be one of the many nobles sacrificed on the top of the Pyramid of the Q’uk’umatz by the Kuhul Ahau himself. He had accepted his fate after the defeat of the revolt and was proud of being sacrificed to Buluc Chabtan after fighting for something he believed correct.

Ook’in of Palenque looked straight into the eyes of his Kuhul Ahau and he felt the regret of his enemy as he plunged the obsidian knife right into his chest like the Gods intended, his last words were:


“Take care of our people”.

​
Ixbalanqué would always remember the fire on the eyes of Ook’in of Palenque, a traitor to the throne, but someone loyal to their people until the last moments of his life.

The blood of the traitors slowly flowed downstairs and Ixbalanqué looked at the cheering crowd celebrating the death of those who had dared to defy him, but he was not happy, of course, he had eliminated another threat to his throne, but it was necessary for the gods to quench their thirst with the blood of men? Why not only with adoration and faith as the Mayan-Christian heretics said? Why his family was deemed unworthy to rule by these nobles?

Being the greatest religious leader of his faith, he now doubted the validity of acts that had been carried out for millennia, human blood allowed the balance to be maintained in the universe ... but what if that was false? the Etruscans, the Huns and many other peoples had existed for a long time without sacrificing humans and the world had not ended, maybe their ancestors were wrong ... maybe it was time to change ... 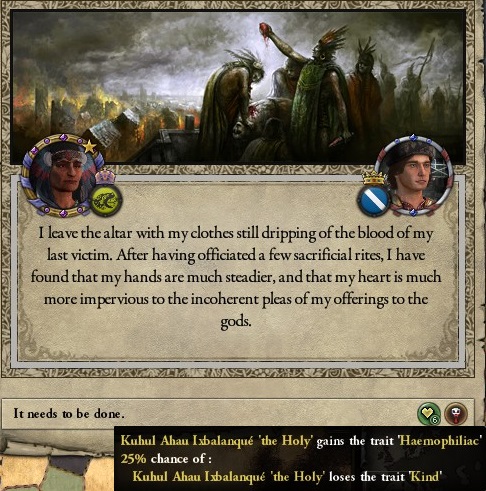 He sacrificed so many enemies that he gained a trait...​
After appointing his beloved bastard brother Hunahpú as the new governor of New Calakmul and head of the new house named in his honor and forgiving the successors of the Oncan house for their betrayal, Ixbalanqué left power in the hands of his council and locked himself up for a few weeks in the library of the Main Temple of New Tikal to study ancient scriptures, perhaps there was a way to avoid sacrificing his own people again to satisfy the whims of the Gods…

The bastard son of the Ahau K'awil Q'uk'umatz and K'naabk'naab of the now defunct house of Palenque is the founder of a fist Imperial "cadet" house.​

Meanwhile in the Temple-Complex of New Tikal (Cadiz) the priests were concerned because the stars indicated bad portents for the Empire, there were only ten years left until the end of the eighth Baktun and all the predictions pointed to great and catastrophic changes that would occur in the next decade.
Expand signature
My Mega-campaign AAR: Storm from the West, Parts: 1- Rise and fall of the Kingdom of Ishfania ( 559- 290 BC -Eu4), 2- The Exiles ( 200 BC- 250 CE -ck2), 3-Sunset Invasion (250 CE- ongoing- ck2)....


""Furthermore, I consider that Victoria 3 must be released"​

One way to cut out the rot of rebellion.
Expand signature
To view is human, to comment is divine.
"Be not afraid" - John Paul II
"The Christian way has not been tried and found wanting, it has been found to be hard and left untried" - GK Chesterton.
Current AAR: The Thorn of the Rose HoI4 The Future of the Red Lion Stellaris (on hold) Journal of the Silver Daggers Battletech
Completed AAR: In Memory of France EU2 Pax Humanitas Stellaris 1.4.1 A VictoriAARn Education Victoria II 3.2
The Great Trial Stellaris 1.9.1A Game for Lisan: Belgium EU4 1.25 Account of RCAF Bomber Command HoI4
Other AAR: Entering the First Court - Kanem Bornu EU4 1.22
View my full AAR list at The Inkwell Red Special Cookie ●
This line is necessary since the forum re-work to enable the links in the last line to be used.

stnylan said:
One way to cut out the rot of rebellion.
Click to expand...