ibicko said:
This work is heavily based on that of an artist whose name eludes me (thanks to the SA paywall) who made the original for Wiz's Azerbaijan mega-campaign - I will credit the original artist if I have access again

I believe the original artist was by the name of DarkCrawler.
Toggle signature
"Sucess is not final, failure is not fatal: it is the courage to continue that counts." - Winston Churchill.

Dayni said:
Well that was a wild ride. To rise high enough to hold all of Iberia, only to lose much of it and then deal with the mess. Twice in succession. Too much to really describe at 2 am. Shame that Hispania would just not stay in one piece. But that's part of the fun for the future.

Only got round to reading this AAR now, and wow, that was a wild ride, to first take a separate branch after the loss of the main line and just try to bring yourself back from the brink. I assume that the papacy really wanted their man in and that's a HIP mechanic? Also, it's impressive that the de Castellons (a whole other dynasty) managed to keep it all together and hold a claim long enough to then push again.

Can't wait for the continuation, and am wondering if you'll be modding anything for this AAR specifically for the one empire.
Click to expand...

I don't really know if it is a HIP mechanic or not, but i've never seen Papal antikings before, will have to look further into it
I will be modding this game specifically to add some event, mostly for the early and late game. However if anything else comes up I will always add more events or decisions based on the events that occur.


Mudkippowerz1 said:
I believe the original artist was by the name of DarkCrawler.
Click to expand...

Very nice chart! For some reason the forum no longer alert me of this thread being updated... Hope I don't miss the last entry and the port to EU!
Toggle signature
My tools:

In 1354 a revolt began in the Holy Roman Empire, led by the Grand Duke of Franconia with the popular support of many of the North German and Polish Princes within the Empire. The war was initially one to limit the power of the Holy Roman Empire, however over time as the movement gained popular support it turned into a movement that would change the very framework of the Empire itself.

Following the victory of Duke Welf II of Franconia over Kaiser Adalbert II, the victors stated their terms. They demanded a greater limit to the power of the Emperor to prevent further abuse of power. However other princes within the Empire demanded further reforms to end ongoing issues within the Empire. And so the Emperor called the Diet of Wurzburg to evaluate and find a solution to these grievances. 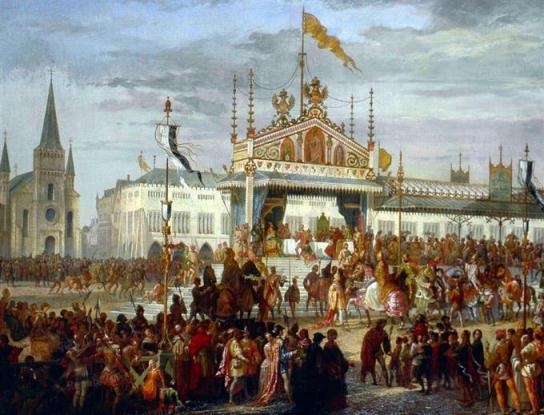 The Diets main issue was the power of the Emperor. Despite opposition from many of the Emperor’s closest subjects, the Power of the Emperor was severely diminished. No longer did the title holder have to authority to draw tax directly from the princes. The hiring of levies from Imperial subjects was also strictly limited to the Imperial demesne.

As a compromise between the Emperor and his subjects for the severe limitations placed on the title, the Electors within the Empire were limited to seven, three ecclesiastical, four secular. These electors would be:
The electors would assemble in Frankfurt, the Imperial capital to discuss the election and cast their vote. The elections were to be concluded in thirty days. However if this date was not met, the electors would receive only bread and water until they decided. Papal authority over the election of the emperor was virtually non-existent and the bull marked a considerable move away from Papal intervention within the Empire.

One outstanding issue within the Empire however was the status of the Kingdom of Poland. For centuries, the Polish regions had remained within the Empire with little tolerance of its leaders. Whereas in previous generations an independent Catholic Polish Kingdom had existed, until it was brought down by Pagan revolt. With Polish princes lending their popular support to the rebellion, the matter turned to the status of the Kingdom. Polish princes wanted to create a newly independent Kingdom with Władysław of Mazovia as its King. Yet the Emperor was not willing to let the territory go.

After an arduous debate, a middle ground was settled upon. The Kingdom of Poland would receive nominal independence from the Empire, however Silesia would remain within the Empire, as much of the land in the area was held by German nobles who opposed independence. Waldemar Von Main would be appointed King of Poland until his death, however future Kings of Poland would be elected by the Sejm. This body would elect the next King from a line of candidates throughout Europe. However many of the candidates would be from within the Empire itself. As the Sejm was so large, with around 10-13,000 voters, the election could take far longer than that of the Holy Roman Empire. However such procedure was required to gain the widespread support of the Polish nobility within the Kingdom.

The agreement was finalised in late 1356 and named the Golden Bull after the seal it bore. The creation of the Bull did a great deal to raise popular support throughout the Empire for Adalbert II, who became known as ‘the wise’ for his actions in stabilizing the Empire. The electors continued to support the Adalbert, the King of Denmark in his reign as Emperor for some time.
Last edited: Aug 28, 2015
Toggle signature
A Spanish Story - CKII Cantabria
A Tale as Old as Time
• Mallorca • Dual Monarchy •​
Reactions:
N

A scandinavian-led HRE is bound to be interesting! I'm eager to see the EUIV HRE mapmode already

Oh, I think there might be a small typo? You said that "a middle group was settled upon". Maybe you meant a middle ground?
Toggle signature
My tools:

so glad that something like that did not occur in Spain
Toggle signature
'The North remembers... The North knows no king, but the King in the North whose name is Stark'

Oh, I think there might be a small typo? You said that "a middle group was settled upon". Maybe you meant a middle ground?
Click to expand...

Fixed the typo... I'm also interested in the Danish led HRE, could make Denmark question itself in later generations, is it a Scandinavian kingdom or will it give in to its German influences?
In terms of the map, ask and you shall receive... I am considering making a decision for Pomerania to potentially join the HRE in around 1450ish. Most of the conversion is done, just some religions and cultures to clear up along with adding events. Each province is correct along with their rulers.
Toggle signature
A Spanish Story - CKII Cantabria
A Tale as Old as Time
• Mallorca • Dual Monarchy •​
N

Actually... having a more blobblish spanish empire become a HRE-style state in EU would be a very sweet alternate history to play though too.
Toggle signature
My tools:

ck2IDE: syntax highlightling (and more to come! for CK2 on Sublime Text 3​
N

Only nowdo I understand why is Austria refered to as a margraviate rather than an archcuchy. That's a tiny Habsburg demesne!
About the polish bit, which has been quite interesting (were there actually so many electors in the P-LCommonwealth? That's madness!

(Very off-topic: Now I notice that, when back in the chat I mentioned "republica" used in old spanish as sinonym to state of society, the actual closest translation would be commonwealth. One could speak of "the commonwealth of all the spanish" without implying a republican form of government).
Toggle signature
My tools:

Sounds great ibicko, that was a very nice wider reading article, cleared up my understanding of the bull itself.

Denmark leading the HRE? this will be intresting.
Toggle signature
My Inkwell: Great to here ibicko, looking forward to seeing the update.

All the best and look forward to whats in store.
Toggle signature
The causal background looker
N

Looking forward to it!

...hey! How have those pesky english ended up with the land of aquitania which was Spanish in the last chapter?

Are corsica+sardinia their own realm? I see a juicy target there after unification, hehehe
Toggle signature
My tools:

It's not England it's Aquitaine who I also had break off for the conversion
Sardinia and Corsica are their own realms, mainly to limit Lombardy's expansion, considering how powerful Milan is in base M&T. Even with their losses they are still one of the most powerful countries in the game and will make a good future rival.
Toggle signature
A Spanish Story - CKII Cantabria
A Tale as Old as Time
• Mallorca • Dual Monarchy •​

I think the Fadlid Caliphate will be a more than respectable rival
Toggle signature
'The North remembers... The North knows no king, but the King in the North whose name is Stark'

The actual story itself will not commence for some time. I still have some background articles I want to put up in the time being. But it is time for part 2!
Toggle signature
A Spanish Story - CKII Cantabria
A Tale as Old as Time
• Mallorca • Dual Monarchy •​
C