A RANDOM AAR - 10-Afr​
This is going to be just a 2 post presentation of a game that I have completed while searching for an error in the save file for my Russian AAR.

I have used RandRoad mod. Made a scenario - 10 countries in Africa. Starting tech is 44 USA
The name is 10-Afr and you can find it here

NOTE: I forgot to turn on battle scenario, so the rest of the world is just unclamed provinced. You will crash if you enter them. Also crossing the Suez canal does the same, though there are no VP's in Sinai.â, so you're ok in ignoring it.

Here is a map of the situation:

Yellow is Romania, Beige is Manchuko, Blue (North) is Greece, Orange (Both) is Namibia, Brown is Belgium, Blue-Grey is France, Blue (South) is -somebody can't remember-, Light Green is Shanxi, Dark Green is Ukraine and Turquoise is Luxemburg.

France has the most starting ICs, the next is Belgium. I chose Romania because it's harder to play, but it has the economy and starting army to get itself going and a start position that narrows the terrain where the first battles take place. 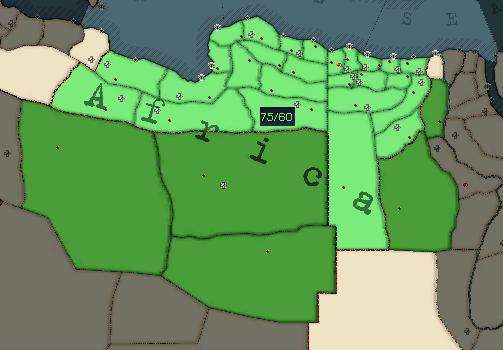 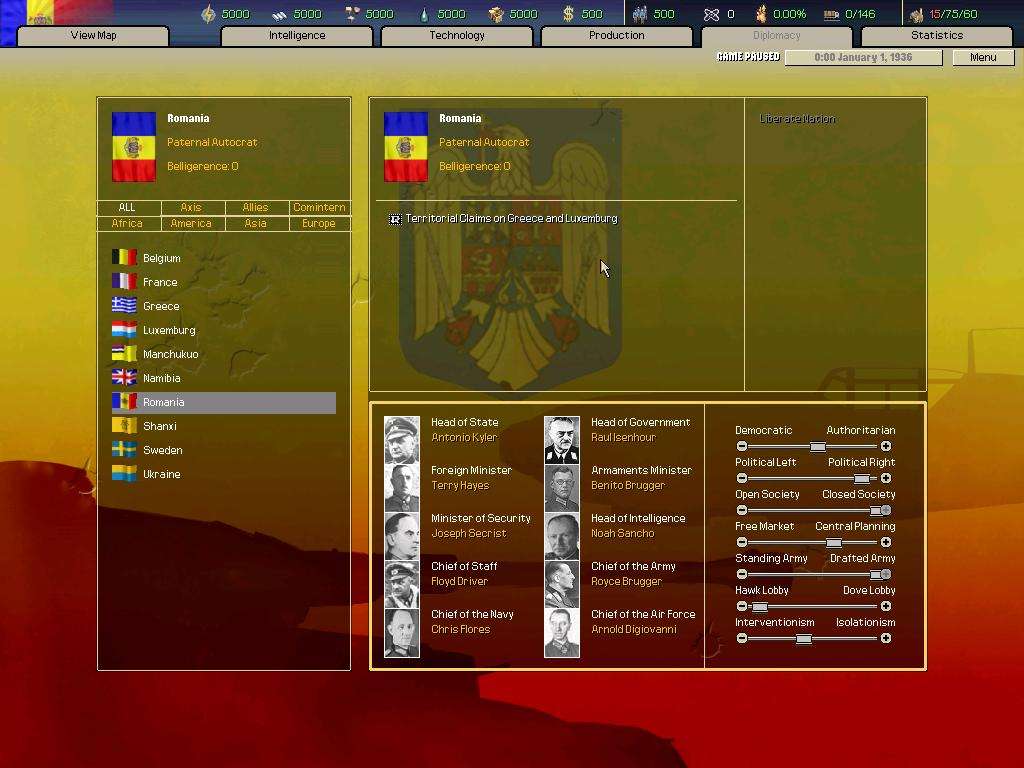 Notice the drafted army. That will change.

Pretty soon, Manchuko DOWed me. The front was static until I created 12 Mechanized divisions. I took them, with a little help from Greece. Next up was Namibia, But Greece took their most important province and the rest of the country was about 200 km away, so I DOWed Greece too. After a long Desert campaign where I first used 3 Arm divisions, I took out both of them by 1939-1940. Getting Cape Verde was a bitch.

BUT. I had my navy sunk 3 times, luckily no divisions were being transported when my transporters were sunk. First Manchuko airbombed my start Transport in port. Then the Namibian fleet destroyed my transport+escort fleet 2 times. I started building BBs and CVs, but it would take a while, and another enemy would claim my fleet

It was time to invade Luxemburg. Luxemburg conquered Shanxi, and also participated in the dismembering of -thet south blue country- along with France.

CAS standing by to support ground troops for the first time

Next (and last) update coming as soon as I can write it.
Toggle signature
Into CKII now

After a few challenging battles on the Nile, Luxembourg became a pushover. By the time I reached a border with Ukraine, I just gave my troops orders to conquer all remaining VPs, and they did without a single lost battle.

BTW: That blue thing in the South that was conquered by France was Sweden (Sweden? Never heard of it! )

I allied with Ukraine just before annexing (because they are National Socialist, good relations and they had cores on Luxembourg), so I inherited a war with Belgium. Having only a single army there, I accepted a white peace.

Not much time went by and France DOWed me. Troops in the South remained supplyless at least 2 times, as I was caught unprepared, but I somehow managed to save them in the nick of time, but it was too late for my Tank Army. I disbanded them while they were retreating through enemy territory (gamey, but I had transports stationed on the sea shore, so a manpower gain is perfectly realistic).
The war was an exhausting one and lasted until 1942 and claimed my fleet in the middle stages.

So only Belgium remained. There was a period of calm until 1949, during which I built a formidable navy and researched my way up the tech tree exchanging techs with Ukraine. 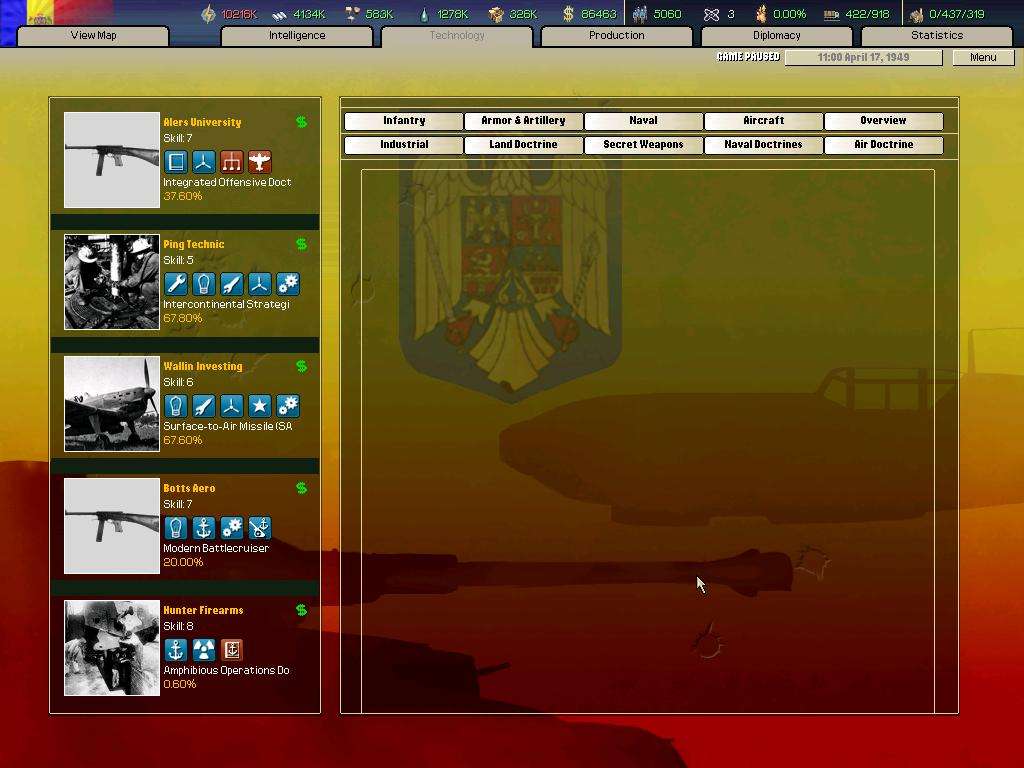 The war lasted about a month. The defenders were resilient, but eventually defeated. My fleet's moment of glory was played out during this war:

The BB was sunk because the Nuclear fleet was accidentally sent alone on the coast of a port in which all Belgian carriers were stationed. The circumstances under which the 2nd SSN sunk are mysterious to say the least, it is not listed as a victim of any sea battles, yet it sunk. In the real world it may be that it imploded due to previously caused damage, but is that possible ingame?

The next years until 1954 were peaceful. Ukraine and I continued tech exchanges. I finished the tech tree in June 1951. He did it in December.

I continued building an army, navy and airforce, and organized them neatly.

Here is the end: 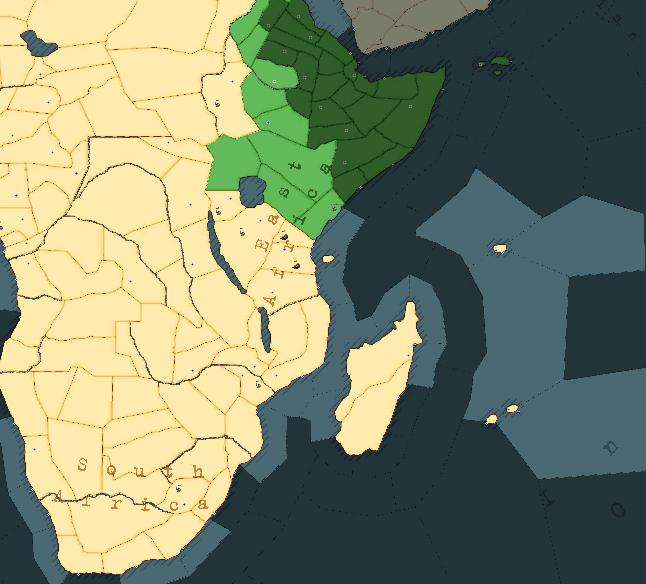 And here is the ending OOB:

* Distinguished during previous wars
** Name invented by me. Inspired from RA2/YR Rocketeers.

Partisans exist only in Malta, South Sinai and a province to the South of Suez on the Egyptian Mainland.

So what do you think? And try the scenario for yourselfs. It's quite good compared to others that the RandRoad generator has made for me. And it runs fast because of the few nations.
Last edited: Aug 28, 2007
Toggle signature
Into CKII now

A classic AAr style! Very well done, although the lack of partisans was kinda cheap. Looks entertaining. Perhaps I'll try the mod sometime.
Toggle signature
I'm smart enough to know that I'm stupid
Member of the ahistoric association
My Hebrew Uganda AAR!- Weekly AAr showcase, 26-07-2007! - Winner, Best HoI Narrative AAr Q4 2007. Over & done with. Kinda completed.
Fan of the Week, 12-8-07; and 12-10-08
Earned a Kiss on the Cheek for Participation in the Trial of Fijj
Fijj also gave me this moldy cookie for guessing his name-●

Thanks, likk9922! The partisan thing is uescapable though. Unless I mod the .inc file myself...

Here are some very nice SKIF graphics used at the end:

And research hasn't stopped. We are working on Super Fast double-barreled SH Arm:

Credits go to whoever is thew genious that created it.
Toggle signature
Into CKII now

Yep, I forgot to check battle scenario. It crashes when you move something in an unoccupied province and oddly enough when you cross the Suez with land units.

Also a minor bug when you choose only coastal provinces around the world, even if you check battle scenario, Reykjavik is available but unoccupied.
Toggle signature
Into CKII now

rcduggan said:
what about the rest of the world? is it not controlled by anyone? I didn't think the Hoi2 engine supported that. :crazy:
Click to expand...