A few stupid questions related to new mechanics since precinct was released.

Jump to latest Follow Reply
Menu
Install the app
You are using an out of date browser. It may not display this or other websites correctly.
You should upgrade or use an alternative browser.
Empire of Sin 488 Beta Branch forum 14 Suggestions 295 Technical Support 54 Mods 2 Bug Reports 1145

So, I'm trying to figure out a couple of things that I don't think were covered in either Dev diaries or in my attempts to search for answers. Anyone have knowledge they can share?

1) The police seem to never raid my rackets. It doesn't matter how many people I kill or if I never upgrade deflection on my rackets. I do see cops out on what looks like raids for other bosses. Now, at first I thought this was just related to buff you start with in the first Act, or maybe I was making the most of Izzy is Busy, but even when I'm sitting at Police Activity of 99/100, raid chance is zero. Note that this is before I buy protection from the cops and have Honorary Deputy status. 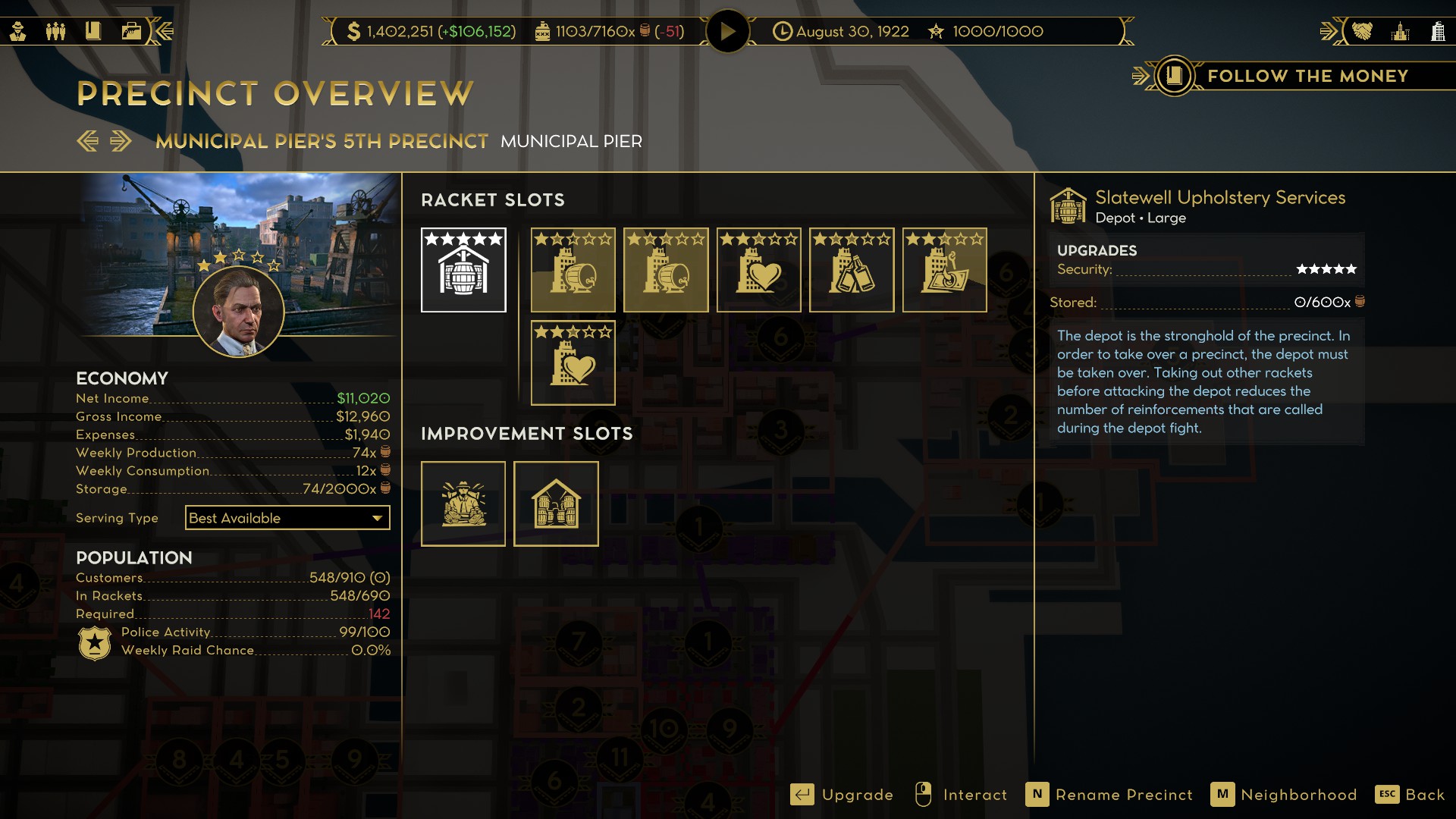 Am I missing something here? Surely I'm not that good at masking my criminal activities until I have 500,000 to throw around at the cops.

3) Does owning a neighbor matter? I have a bunch of neighborhoods that I split with other bosses (big map, but maximum number of bosses), and I seem to be getting synergies in them even if no single boss is listed as the owner of the entire neighborhood.
Last edited: Jan 9, 2022
Toggle signature
All Hail Him,

This is just my say based on my experiences with this game, old and new version but mostly will answer your question based on new version.

short answer to all: Game still has many bugs and is "broken", many of those things you're asking about either fail to "trigger" or "fall asleep" when they are suppose to activate and work properly.

Long answers (my experience as I have had these issues as well):

1. The game be asleep some times and you will see patrols just standing around, AI starting an action but not following through, Synergies not activating when you see and have the required rackets etc. The police not raiding or the game not registering that you should be getting raided etc could be as simple as saving and reloading the game or even re loading from a previous saved game before you noticed the issue. I Know you mentioned it but when you pay off the police to look the other way they stop patrolling your neighborhood and will not raid ... sometimes it will lower police activity and even raid level. When you pay them to protect they do the same but the raid chance goes down or even away for a good period. Had this issue where they kept raiding for what I considered no good reason and what fixed it was me keep paying them to both look the other way and protection. Within a week it went from 6.0 to 0.0.

2. This whole diplomatic system is broken and does not work properly even when you are doing everything right the AI will F it up for you to make things more difficult and most times ridiculous to be honest. Guess for now all we can do is deal with it and work around it, however that may be. I will have a great relationship with a boss and all the sudden they don't want the be protected anymore, break a business arrangement WITH ME etc and just like you I take hits for breaking it ... we should not be penalized for actions THEY took to break sh** What is even better is that 2 seconds later they ask to be protected again, before they did it with business arrangements as well, they fixed that part somewhat now but the protection bs still happens and every time you reject relation goes way down and if you accept your honor goes down! lose lose lose because the AI wants to F around and sh** on your head. Like oh, nice game you got going on here, looks like you're having a little bit of fun, things are going ok ... would be unfortunate if "ooooh yeah" *huge 10 pounder right on top of your head*. Yeah, that weird 25+ messages of us losing honor because someone else attacked us, raided, started a war etc is real and has happened to me before an I was like WTF is happening and why ... have no idea but I think that is when they all get together to form a circle jerk around you because why not. Seriously though I think that is just broken mechanics of the game that do not work how it should or if it does work as it should but gives us no indication of it about to happen or it developing etc and we just get hit with it out of nowhere. Still makes no sense to me honestly. Oh, and yes, you are just taking hits to your honor and relationships due to what the other bosses are doing to each other. I see how that is suppose to work but in the game I guess it does it in a very inconvenient and senseless manner.

3. Owning a neighborhood gives you no perks or bonuses as far as I have noticed before and now. All that does is allow you to complete the missions of owning neighborhoods and nothing else really. Suppose to make you feel good for a sec I guess. So, the synergy function works a bit different but the same in the new version. Synergy is base off of the whole Neighborhood not just inside a single precinct ... I hope I am understanding you correctly here. If, say you have 5 Casinos but in 5 separate precincts in one Neighborhood you will get the 5 of a kind for those Casinos. Now, say you do not have anything in one of you precincts in that same Neighborhood but you have upgraded your depot/safe house to level 2/4 you will see that the hotel which is only available when you have a synergy is available for that precinct. As far as Owning the neighborhood effecting if you get synergies or not, that is not the case or a thing in the game. You can have just one precinct in the neighborhood, set up one of each racket, 2/2, 3 or 5 of one kind, or whatever in that one precinct and get the synergy bonus. Kind of went a bit everywhere with this one but I hope this answer helps.
Last edited: Jan 9, 2022

AL82 said:
short answer to all: Game still has many bugs and is "broken", many of those things you're asking about either fail to "trigger" or "fall asleep" when they are suppose to activate and work properly.
Click to expand...

Okay, so the cops and AI diplomacy is buggy at the moment. That answers my questions. Thank you.
Toggle signature
All Hail Him,