A bit of a revision of Sami National Ideas

Jump to latest Follow Reply
Menu
Install the app
You are using an out of date browser. It may not display this or other websites correctly.
You should upgrade or use an alternative browser.
Europa Universalis IV 76595 EUIV: Suggestions 16473 EUIV: Technical Support 5853 EUIV: FAQ & Strategy Guides 197 EUIV: AAR's, Let's Plays, and Fan Fiction EU IV: Alternate History Short Story Contest Contr 26

So what is the point of such a revision? To get some more interesting or different national ideas out there and to tie in history and fluff to gameplay.

So what so bad about them? Nothing actually, but they are a bit...meh. For instance an extra merchant for most often a 1-2 province Sami nation in the extreme north with access only to the Baltic Trade Node or the White Sea one. So an extra merchant isn't that useful.
"Defend the Noaidi Traditions" gives Tolerance of the True Faith which is nice, but should logically give tolerance of heathens or heretics and likely some religious unity.
"Standardized Literary Language" is cheaper stability, but now that we have the Institution mechanics wouldn't a standardized literary system be really handy for spreading or adopting(embracing) an institution?

So here are some suggestions for a bit more overall useful and hopefully interesting ideas:

Sami Traditions
As you can see I've taken the enemy attrition from the first idea and made it a tradition. Seems a bit more fitting of a "tradition" for a Sami nation doesn't it?
Additionally the tolerance for heathens is to represent the long and gradual shift of culture and tradition in Sami areas as they were in active contact via trade and later by settlers to the other Nordic people over the centuries, not to mention the gradual conversion of the Sami to Christianity while still maintaining many of their old traditions.

1.) Living off the Land
The Sami are uniquely adapted to survive and live in the extreme northern environment of the Nordic countries and have been living there for several millenia. They can get by with as little as possible when the situation demands it and are expert trappers and foragers.
A proper land attrition reduction is in order for that, and to make sure the Sami armies don't waste away in their own provinces, eating away manpower and money.

2.) Reform the Siida System
The siida system is an ancient sami system of land distribution based on an inhabited locality and subsequently adopted in to the reindeer husbandry tradition some time in the early 12th to 13th centuries when the first domesticated reindeer herding was emerging. 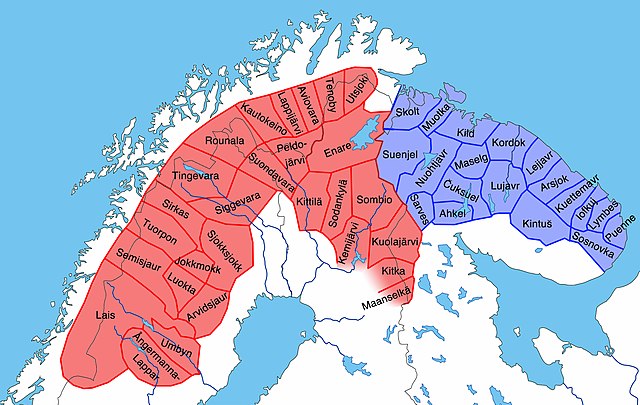 A more unified and centralized Sami nation would undoubtedly seek to reform or refine this system and use it outside of only reindeer husbandry to establish an efficient government.
A bonus to national tax income is quite fitting for this one.

3.) Defend the Noaidi Traditions
The Sami shamanistic tradition didn't come under significant pressure until the early 16th century when the Swedish Crown started to settle the northern reaches of the realm. Despite this the Sami of the far northern siidas in Finnmark and Lappmark didn't convert until forced in 1730.
A higher tolerance of the true faith and some religious unity models this quite nicely.

4.) Protect the Reindeer Herds
I figured protecting the domesticated reindeer herds from predators and other natural calamities would naturally lead to a more efficient production of furs so there you go. The national tax modifier got moved to the new first idea to make a bit more sense on the surface.
How you'd get better fish yields from Finnmark by protecting the reindeer is another question entirely.

5.) Encourage Growth of the Winter Market
This idea is great as it is. Helps with the difficult development of Sami provinces, rewards expansion/development and has nice fluff to it.

6.) Secure Southern Contacts
A Sami nation is created out of nationalist rebels or from a core created by said rebels by another nation. An improve relations bonus will help in maintaining relations towards your disgruntled neighbors and ties in nicely to the Lapp Codicil of 1751 aka Codex Lapponia, a boundary agreement between Sweden and Norway that contained a provision for the Sami people concerning how the land is shared by Sami peoples between the borders of Sweden and Norway.
An independent Sami state would want to ensure similar rights by establishing and maintaining good relations between shared borders.
Plus, if you manage to get that fabled Sápmi kingdom, or even an Empire, off the ground the added benefit of aggressive expansion decay from improve relations modifiers will definitely be welcome.

7.) Standardized Literary Language
A standardized national literary language is a great help in disseminating information to citizens. As such an institution spread bonus will greatly help the often isolated and low development Sami provinces in getting some of that "modern" technology and ideas.

Sami Ambition
I assume the previous finisher bonus of increased missionary strength represented the religious awakening and fervor of the Protestant Laestadius movement of the mid-1840's.
However the game ends before the 1830's so it's kinda outside the scope of the game and there's another factoid that could justify the -10% culture conversion cost.
Before the early 19th century for long periods of time, the Sami lifestyle reigned supreme in the north because of its unique adaptation to the harsh Arctic environment, enabling Sami culture to resist cultural influences from the south. Throughout much of the 18th century, as Norwegians of Northern Norway suffered from low fish prices and consequent depopulation, the Sami cultural element was strengthened, since the Sami were largely self sufficient and didn't rely on southern trade for sustenance but for luxury items and goods.
As such a small bonus to culture conversion cost is more fitting for the time frame and will help a player bring the glorious Sami way to the southerners.

l_english:
SMI_ideas:0 "Sami Ideas"
SMI_ideas_start:0 "Sami Traditions"
SMI_ideas_bonus:0 "Sami Ambition"
smi_living_off_the_land:0 "Living off the Land"
smi_living_off_the_land_desc:0 "Our people have been living off the harsh northern lands for millenia through fishing, hunting and foraging. This is expertise that can come in good use on long campaigns even in foreign lands."
smi_reform_the_siida:0 "Reform the Siida System"
smi_eform_the_siida_desc:0 "The ancient land allocation system called "siida" has served us well in keeping track of land usage and reindeer migrations. By modernizing this system we can improve our nations administrative capability."
smi_defend_noaidi_traditions:0 "Defend the Noaidi Traditions"
smi_defend_noaidi_traditions_desc:0 "The ancient Shamanistic traditions of the Noaidi has been constantly retreating northwards before the Christian missionaries of the south. Let us protect the Noaidi and promote their traditions as an integral part of our state. No matter what the future has in hold for the faith of our people these traditions are part of our roots."
smi_protect_the_herds:0 "Protection of Reindeer Herds"
smi_protect_the_herds_desc:0 "Reindeer herding is fast becoming one of the most important parts of the Sami lifestyle as well as a cornerstone of our economy. It is imperative that we do what we can to protect our herds and the lands they use from predators and poachers."
smi_encourage_growth_of_the_winter_market:0 "Encourage Growth of the Winter Markets"
smi_encourage_growth_of_the_winter_market_desc:0 "Our people live in a very widespread area and the northern winters can be both long and cold. Let us create great common markets in central locations in which representatives of all the siidas under our control and in neighboring areas can gather. Then commerce can thrive even during the darkest winter nights."
smi_secure_southern_contacts:0 "Secure Southern Contacts"
smi_secure_southern_contacts_desc:0 "Our people have been divided by the Southern Kingdoms many borders, but we have kept our traditional herding routes despite of this. To ensure that these ways do not come under threat we must establish reliable diplomatic contacts to the south."
smi_standardized_literary_language:0 "Standardized Literary Language"
smi_standardized_literary_language_desc:0 "The Sami people speak many different dialects between them but our state could certainly use a common literary language. There have been attempts to standardize such a language by various outsiders but it is high time we create one ourselves to serve our own needs."
Click to expand...

In addition to this I'd propose that the provinces of Inari, Kola, Jokkmokk and Finnmark be Animist(since Shamanism isn't in the game anymore...) at the 1444 start, as the Sami remained pagan long into the 17th century, since before that there wasn't much interest towards the "far northern wastelands".
This change will also make the Sami tradition of +2 Heathen tolerance and the +1 Tolerance of True Faith from the 3rd Idea make much more sense in context, even if the nation itself is no longer animist.
They should also have high autonomy(80-90%) to represent their relative isolation within Sweden, Norway and Novgorod.
Last edited: Aug 8, 2017
Toggle signature
"Kaiken viisauden alku on tosiasioiden myöntäminen." - K. J. Ståhlberg
"The source of all wisdom is the acceptance of facts."