all DLCs; no Mods

Description:
Whenever I get the odd factory event on one of my planets one of the colonists becomes unemployed and leaves an empty colonists job. It seems like the game tries to move him to the odd factory and fails due to strata mismatch.

Initial event may be triggered as soon as 1 year after colony foundation.
On first appearance, one random pop is fired, and then the event chain goes on.

Problem is that so much early on, planet is likely to be inhabited by but 1 or 2 colonists, and when a specialist looses their job, they can't take a worker job before they are demoted, if I understand well. Even if it occurs later, chances are that a specialist gets fired instead of a worker. In case of a worker being fired, I figure that all works fine, given the 999 weight for the factory job.

Although the colonist is fired just prior the deposit spawns on the planet, and thus prior the new job is created, I'm not sure inverting the order will do anything, nor if forcing a job evaluation would enable a fired specialist to take a worker job. Perhaps even, this order is necessary so that a fired worker immediatly takes the job when it's created.

Contrary to other job creating events, such as dimensional portal, devs apparently wanted here to prevent the player from cheating the event by forbidding the odd factory job until potential effects are no more a nuisance. Hence, firing a pop to get it immediately employed.
However, couldn't the spawning of the odd factory be delayed for a few month, until the colony gets a worker pop (i.e. its third pop), and then only firing a worker if no worker is unemployed? It would have to work event if, somehow, a new specialist pop was open.


But I expect this bug to be related to a more general similar bug! When a T1 capital is upgraded to a T2 capital, when colonists "loosing" jobs are also involved, I also gets unemployment. I post in a separate report. 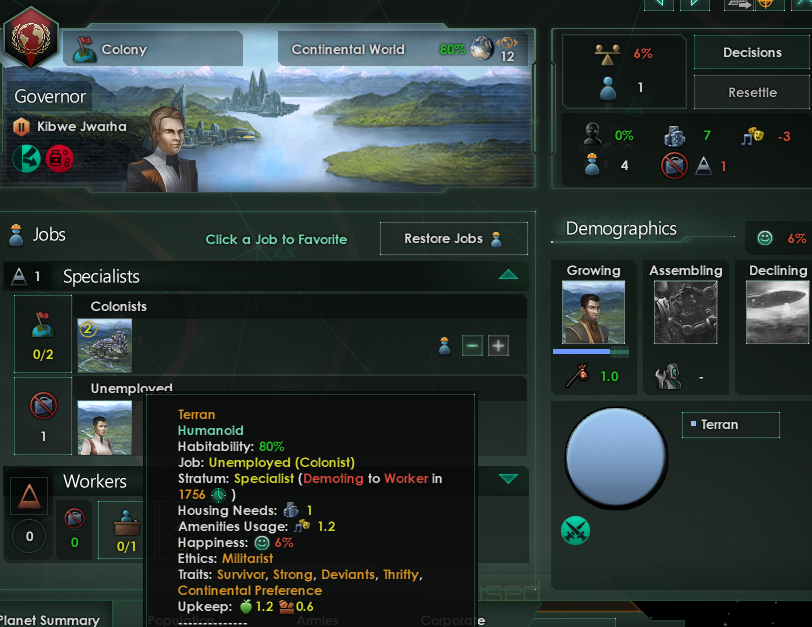 Somehow solved it by toying with "favorite job" and the guy returned to work, but still it's weird: 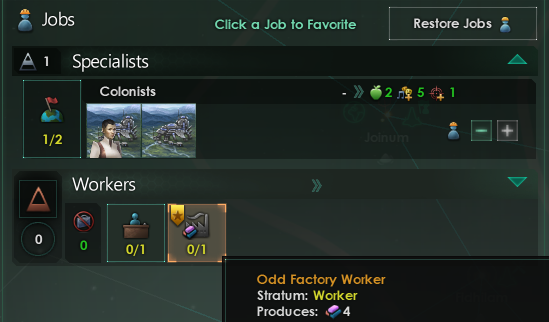