Jump to latest Follow Reply
Menu
Install the app
You are using an out of date browser. It may not display this or other websites correctly.
You should upgrade or use an alternative browser.
Crusader Kings III 15201 MP Open Beta Feedback 25 Bug Report 10230 Tech Support 1419 Multiplayer 126 User Mods 1421 AARs (After Action Reports) Suggestions 4168
Previous dev diary Next dev diary 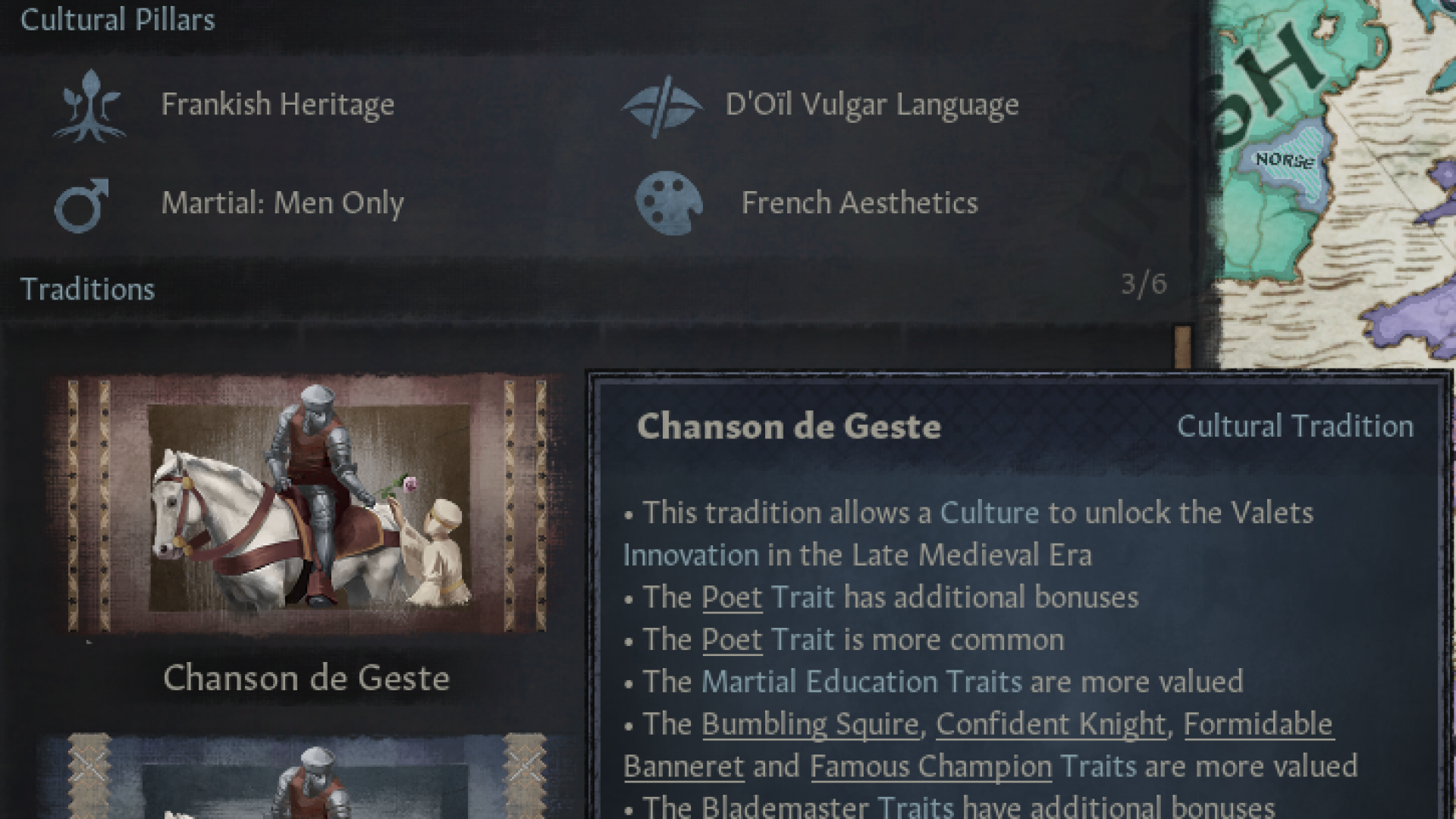 Hello and welcome to another winter teaser

In this short teaser today I bring you more cultural traditions as well as previews of some cultures we haven’t shown you before. 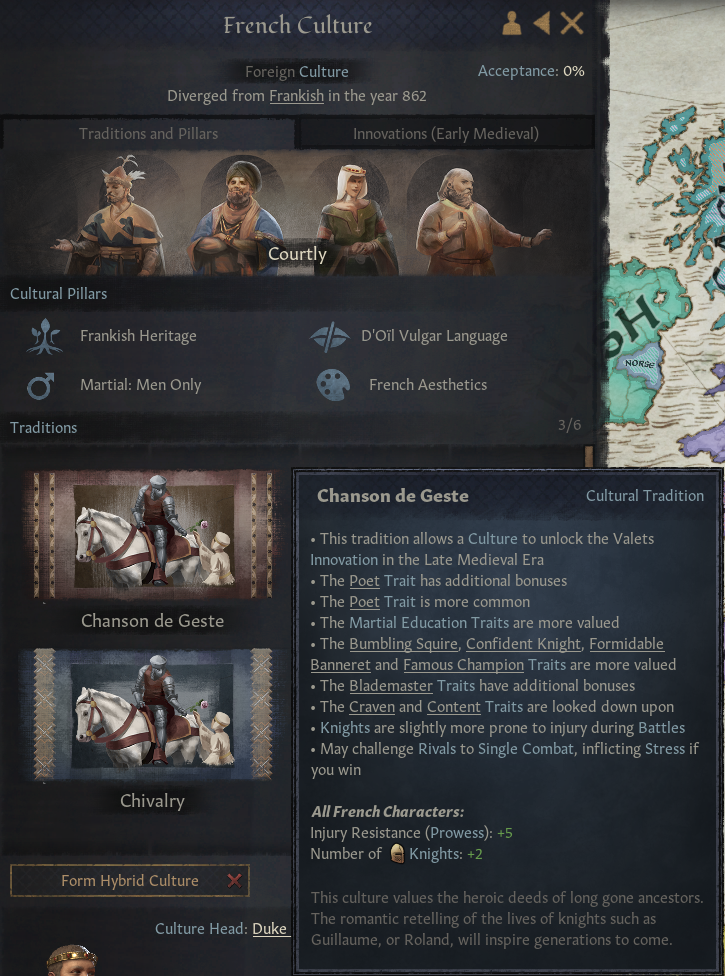 In some cases cultural traditions are regional variants on more generically available one. Instead of the more widely available Martial Admiration tradition that we’ve shown previously the cultures that have a Frankish heritage will have access to the Chanson de Geste tradition. This both grants access to the Valets innovation when the Late Medieval era comes around and highlights the role of troubadours in the French region. 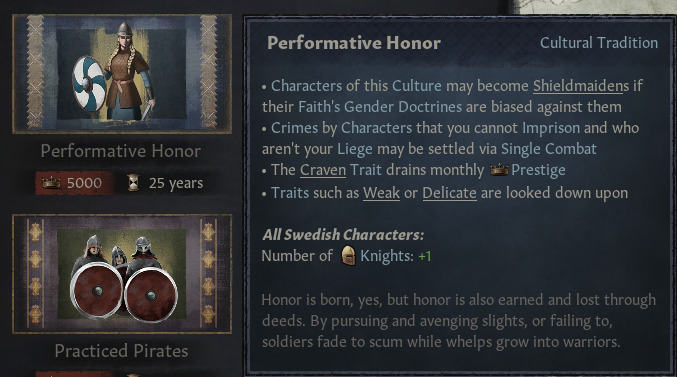 ​
For those that have Flavor Pack 1 the Shield Maiden related content is now connected to a new cultural tradition called Performative Honor, which is available for cultures of the North Germanic Heritage. 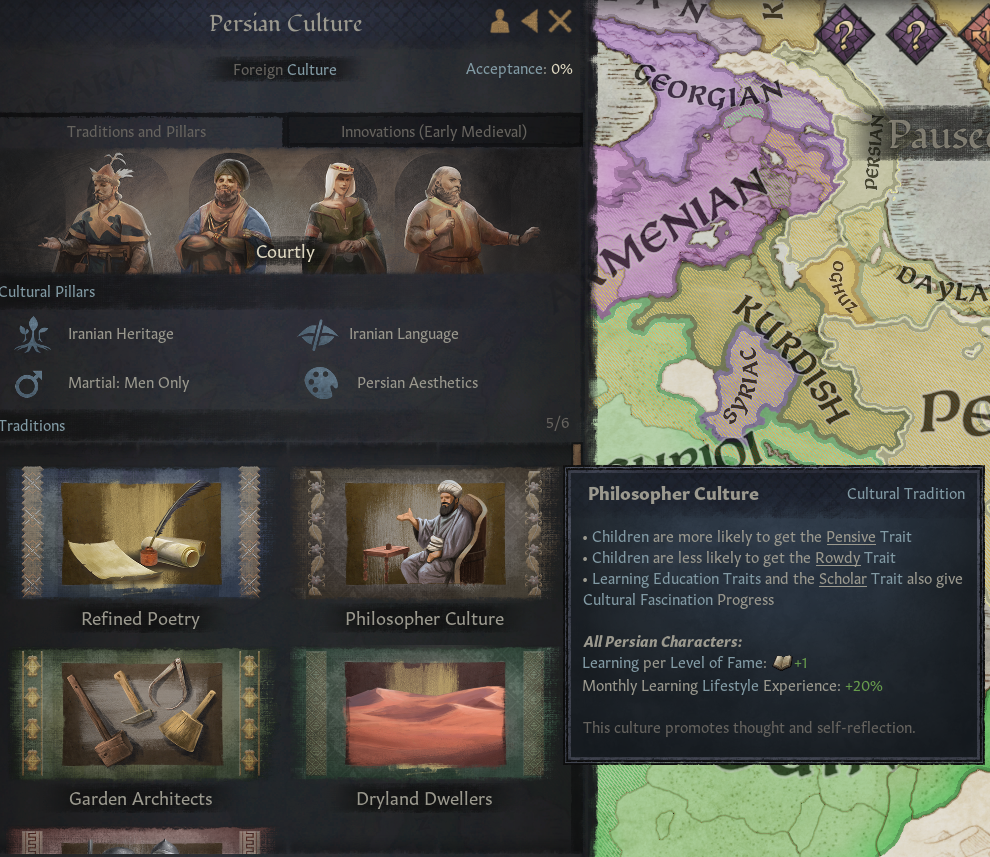 One of the traditions of Persian culture highlights the prevalence of philosophical thought among its members, another gives access to a royal gardener court position. 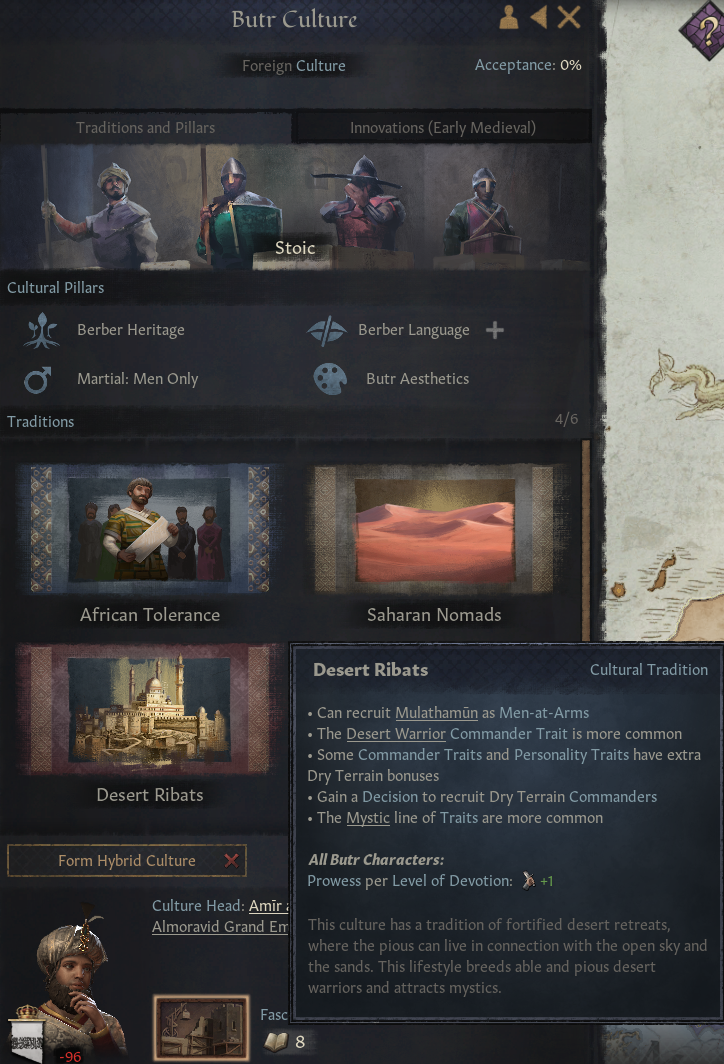 ​
Cultures with a Berber heritage and a presence in desert or dry lands will have access to the Desert Ribats tradition, which unlocks the Mulathamun Man at arms type among other things. 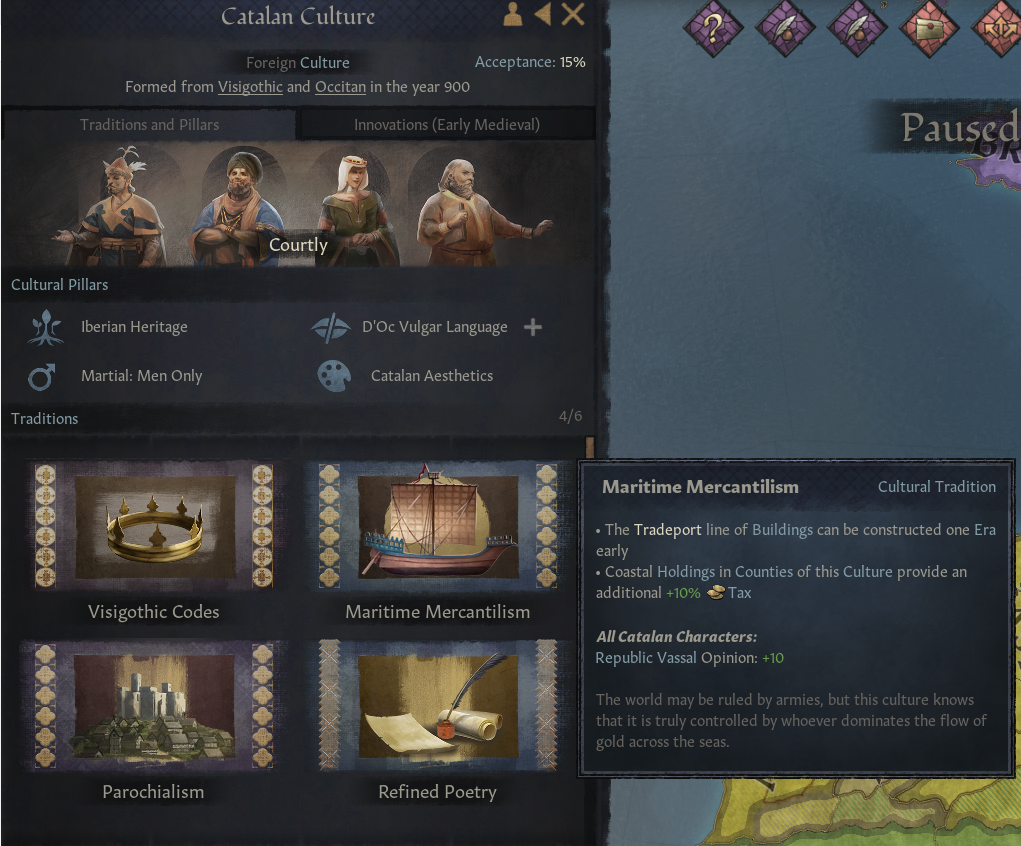 ​
Maritime Mercantilism is a tradition that makes coastal holdings more useful to a culture, as seen here in the lineup of Catalan Traditions. 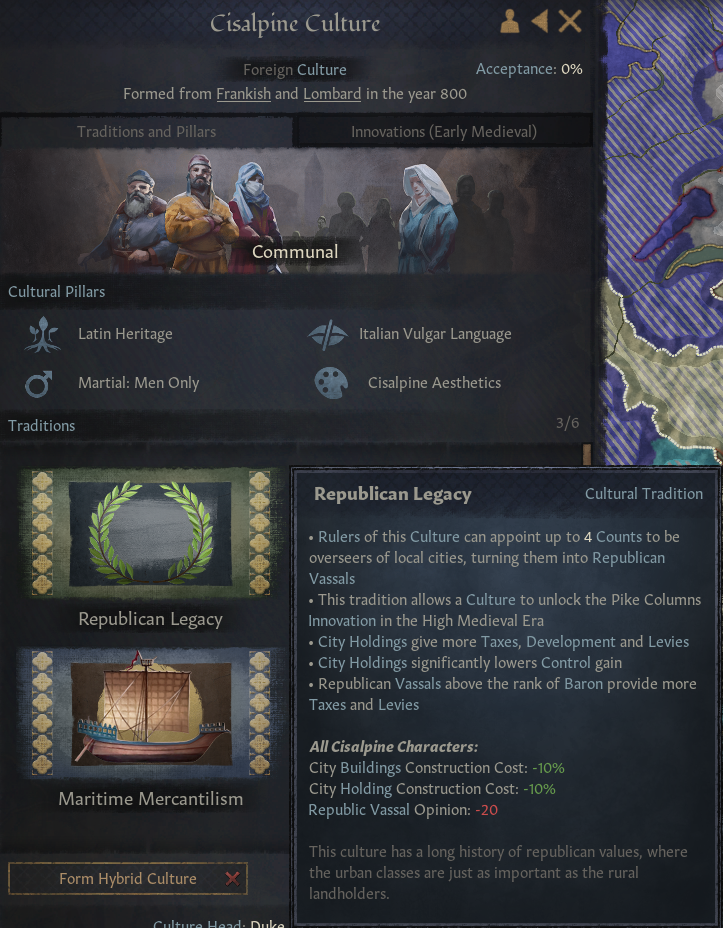 ​
Any culture that has the Roman culture somewhere in its ancestry can adopt the Republican Legacy tradition which is a special version of the more generally available Parochialism cultural tradition. This highlights the special Republican heritage in the italic sphere and will let you create a number of Republican vassals out of your counts who will become overseers, or Podestàs. 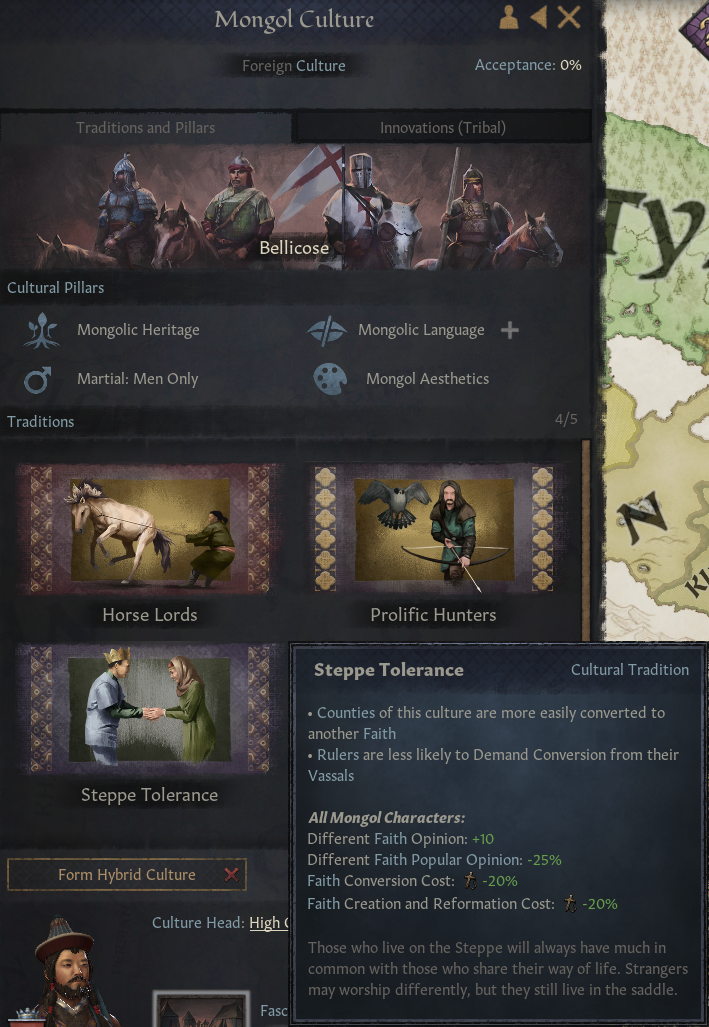 And that was all for this short winter teaser. These are some of my personal favorite traditions in the update, I hope you found them as interesting as I do!
Reactions:

The traditions look cool, thanks!

It says French recently diverged from Frankish in 862. Does that prevent players from diverging/merging this culture for ~50 years?
Reactions:

This is SO good! Can we please get a sneak peek at the Carantanian traditions?
Toggle signature
GENERATION 42: The first time you see this, copy it into your sig on any forum and add 1 to the generation. Social experiment.
Reactions:

These look great — full of flavour and adding replayability as we play characters of different cultures. And the game's design means the AI should naturally make use of almost all the new variations.
Toggle signature
My username is the closest the forum allows to Seek Truth From Facts or in Mandarin: 实事求是​
Most serious HoI4 bugs: Japan & US don't make CV planes [fix in progress] | Straits crisis makes Bosphorus porous | Ironman players can have their tag switched
Easier bugs suitable for the HoI4 War Effort: Typo increases cost of turret conversions | Unit medals cost miscalculation | Typos stop decision icons showing
Reactions:

I'm a bit confused about Republican Legacy saying "you can appoint up to 4 of your Counts...turning them into Republican Vassals" when currently you can simply raise a Republican Baron by granting him the County Title

Does that mean we will have a limit on Republican Vassals in 1.5? @Trin Tragula
Last edited: Dec 21, 2021
Reactions:

Hmm... A question about the new culture system I have is how cultural events will be handled. Will new cultures be devoid of those or will they be based on heritage, language and the like?
Toggle signature
Culture: Real Saxon(Not an eastern Faker) German
Religion: Weird Germanic Neo-Paganism with Animist Characteristics
Traits: Depressed, Lunatic, Stressed, Quick, Gluttonous, Slothful, Wroth, Humble, Chaste, Ambitious, Cynical, Just, Shy, Stubborn
"When in Doubt, Assassinate with a Manure Explosion."
"Friendships end, where borders begin."
"Let us Holy War each other in absolute Harmony!"

"So here we have French traditions:
1) Chivalry
2) Chivalry but in red" 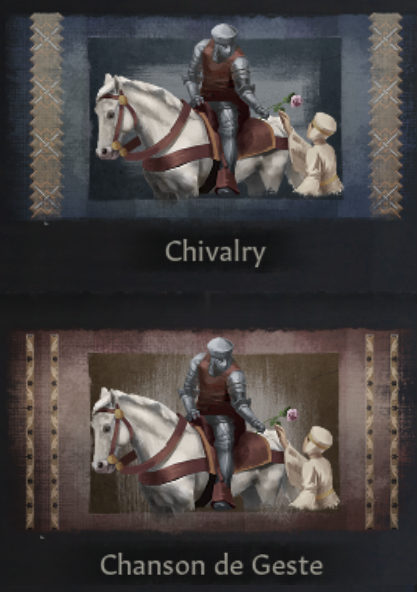 chelvo said:
Hmm... A question about the new culture system I have is how cultural events will be handled. Will new cultures be devoid of those or will they be based on heritage, language and the like?
Click to expand...

I doubt there would be any language-specific events, and if there would be any cultural events at all, binding them to Traditions make the most sense because those can be met in different custom cultures across the world
--
So people think there will be events for specific languages? Lmao, good luck with that
Last edited: Dec 22, 2021
Reactions:
W

Have you decided how to work out the Outremer culture decision for Jerusalem yet?
Reactions:

This bit make so little sense. Why I am as a viking in Sicily can go duel some adulterer-ruler in Scandinavia?? Why is this a feature? If I'm not their liege and have the same rank, have no relation to the victim, why would I be the judge of them?

I like the idea of giving some cultures a special version of a generally available tradition in order to make them more unique.

One thing I wonder about though: Now that making republic vassals is kind of a supported playstyle, will be be able to marry characters who hold republics? Especially if they are powerful vassals?
Reactions:

It really says something that I am more interested in the cultural rework than the dlc.
Reactions: 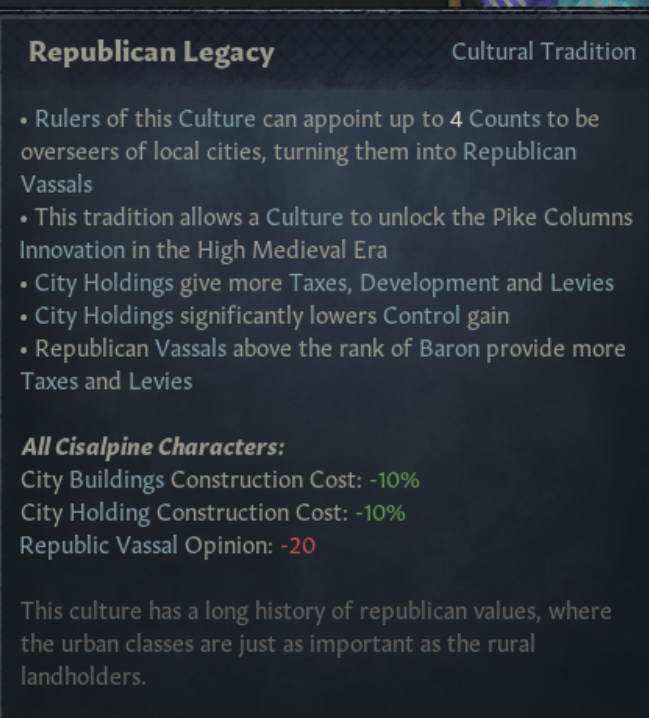 How would this interact with those counts' inheritance, wouldn't that break it if you could just turn any count into republic?

Also, it is just me or "promoting republican vassals" is counter-intuitive to penalties "republic vassal opinion -20" and "city holdings lower control gain", because low control isn't just "level of autonomy", it's a straight up bad thing, which gives you less taxes
Reactions:

TempestM said:
"So here we have French traditions:
1) Chivalry
2) Chivalry but in red"
Click to expand...

Finally an in-game representation of the ties between Catalan and Occitan cultures.

Using "d'Oc" and "d'Oïl" as a name for the languages is a bit weird though. I'd drop the "d' " for both, and maybe keep "Occitan" as the name the language, since it literally means the same (lenga d'òc > occitan).
Reactions:

ssorgatem said:
Finally an in-game representation of the ties between Catalan and Occitan cultures.

Using "d'Oc" and "d'Oïl" as a name for the languages is a bit weird though. I'd drop the "d' " for both, and maybe keep "Occitan" as the name the language, since it literally means the same (lenga d'òc > occitan).
Click to expand...

I guess they don't want to have Occitan for both the Culture and Language. Still the "D'" is weird I agree.

If they do end up going for Occitan as the name though they should use Oïlitan too to keep up parity.
Reactions:

Isn't the innovation of a Men at Arms that is unlocked in the Late Medieval Eras too late to make an appearance?
I usually quit the game before I get to that point
Reactions:
T

add Circassian culture at Caucasus region, please. The Caucasus has many cultures in addition to those represented in the game ( Chechens, Ingush and etc ). One of the most underrated and unexplored region in this game
Reactions:

TempestM said:
This bit make so little sense. Why I am as a viking in Sicily can go duel some adulterer-ruler in Scandinavia?? Why is this a feature? If I'm not their liege and have the same rank, have no relation to the victim, why would I be the judge of them?

I imagine you can only do this in your own realm.
Reactions: