Menu
Install the app
You are using an out of date browser. It may not display this or other websites correctly.
You should upgrade or use an alternative browser.
Crusader Kings II 69353 Bug Reports 19624 User Modifications 10428 Suggestions 5830 Tech Support 6291 After Action Reports
Previous Dev Diary Next Dev Diary
Show only dev responses
So that time of the week again and its time for me to make something up to write about. Today I decided to talk about regions and forts, two new concepts in Crusader Kings II.

First, regions isn't something that is going to affect you directly but it works somewhat like how it have done in the Europa Universalis Games. It's an area on the map that denotes a region with a name and it's mostly used to improve on our localization of things, such as hunting for tigers in India or hunting a deer in western Europe. So no longer will you find Tigers in the woods of Poland if you manage to move your capital of your Indian Empire out of the subcontinent. You can see these regions by opening up a province and click on the new region icon to get an outline of the region. It's also possible to search for regions in the old title finder. 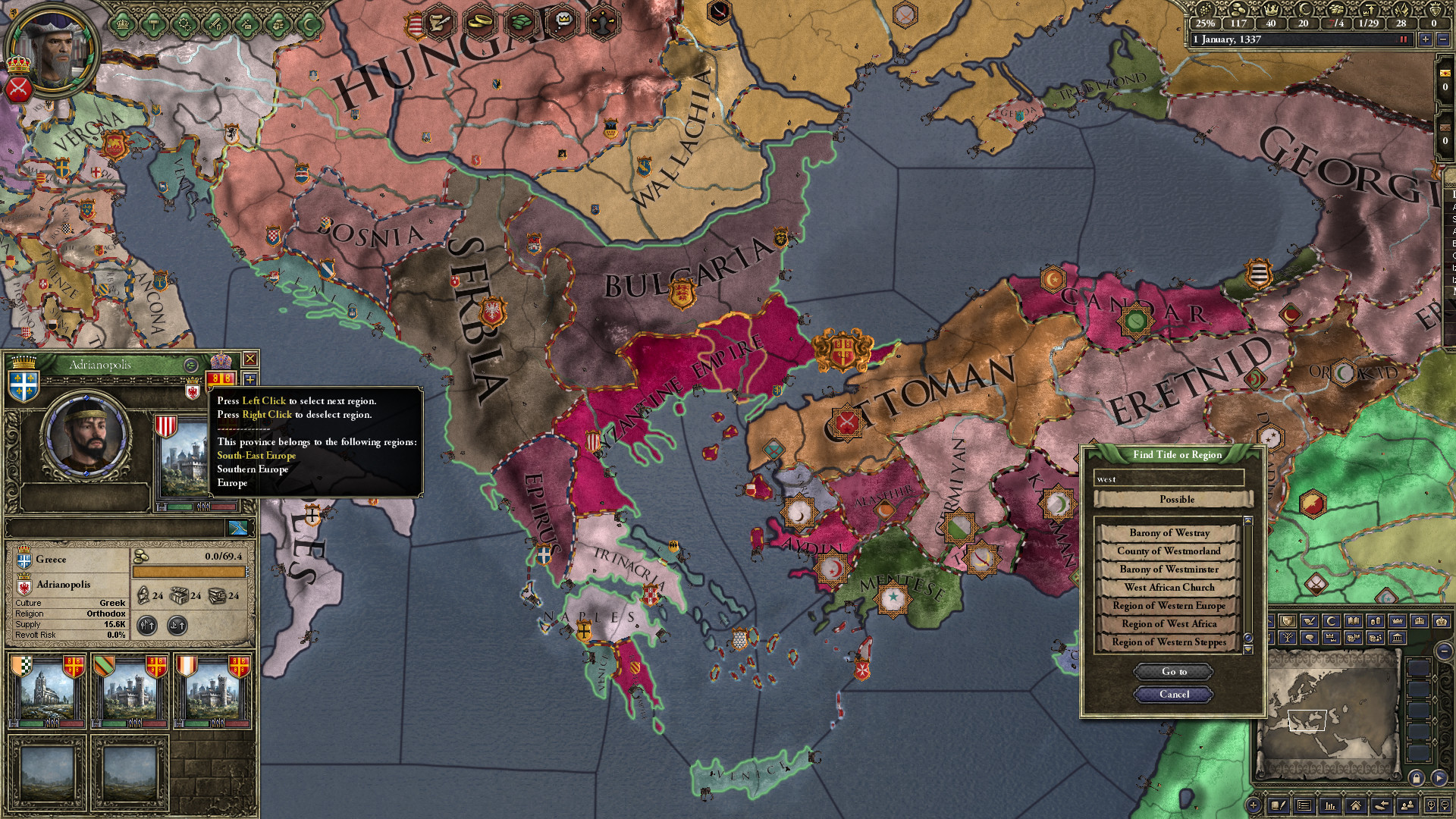 Next is a gameplay feature you will actually interact a bit more actively in. It's called forts which is an additional type of holding you can build in provinces next to the normal ones and trade posts. Because of this we had to extend the province view with a window you can open and close which will show "extra holding slots" which will contain the trade post and fort slots. The fort can be built anywhere from your own territory even enemy provinces that you have under your control. Their biggest advantage is that they are fortifications that you can build up really fast and very cheaply. The main point of them being to let you build up a region as your march towards a big neighbor which will let you slow down their advance but at the same time let you set up forward positions in the enemy territory. 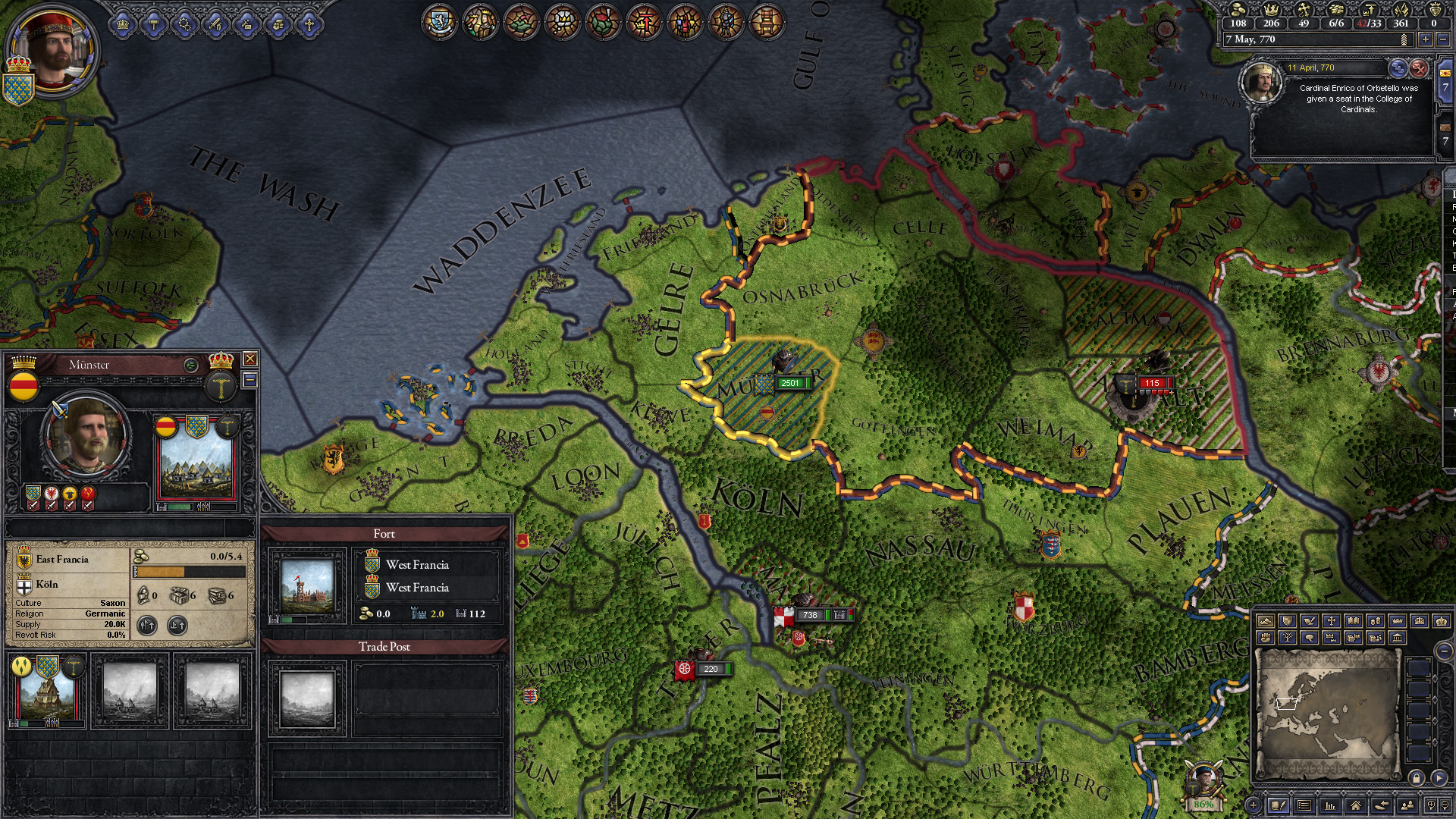 They do have some added bonuses though beyond that, for instance in Tribal land where you have the homeland attrition bonus, that bonus will be removed from the province as long as you have a fort there to supply your troops with. There is also a feature for the forts that is too related to the expansion so I can't delve into that any deeper.

- Fixed crash when a war is invalidated because of no defender
- Fixed the "hostile against everyone" bug
- Fixed bug where the AI would keep their units attached to characters they no longer participate in a war with.
- Added alert for having high prio minor titles available to grant.
- Fixed various provinces in India that had no rulers scripted for some start dates.
- Monks and other people living in celibacy will no longer try to arrange stealth marriages if ruled by a patrician.
- Defensive religions now properly also give defensive modifiers for Camel Cavalry and Elephants.
Click to expand...

You may not find tigers in Poland, but cougars are everywhere
Toggle signature
GOD: Don't make me come down there!
Reactions:

This is so great!

Forts were so important in history. I am glad to see them.
Reactions:

When do we get info on the expansion?
Toggle signature
Member of the OTFTRC - Off Topic Friends of the Turkish Republic of Northen Cyprus

You admire the lions. You despise all sheep, but following lions makes nothing but sheep.
Reactions:

Awesome! Really liking the idea of Forts
Toggle signature
“Move swift as the Wind and closely-formed as the Wood. Attack like the Fire and be still as the Mountain.” ― Sun Tzu, The Art of War
Reactions:

Will there be a Region map mode? Will we be able to grant the forts, like any other holding?
Toggle signature
The Fortress Balkan - Yugoslavia AAR
Clash of Titans - Comintern vs. Allies AAR
No Pasaran! - Republican Spain 1938 AAR
* Weekly AAR Showcase, 8th March 2010 * WritAAR of the Week, 18th April 2010

We need a rework of the Orthodox religion in EU4!

Some suggested national ideas for EU4:

Nice.
Toggle signature
"For a brilliant attack you calculate how many men can the machine gun kill and you launch an attack with a superior amount of men: someone will get to the machine gun." - gen. Luigi Cadorna in "Lettere"

Is the presence of a trade post slot in this landlock province something new?
Reactions:

Seems ever more promising.
So, we can build forts in the enemy territory as we're waging war against them?
Also, since we were talking about customized governments, could it be possible to limit a government to use forts as main holding? Even more, could it be possible to play without any holding but forts? That could allow for a more fluid gameplay for tribals, especially in the steppes, as you'd be, in a way, landless.
Toggle signature
Tolerance Laws - Now with interfaith marriages
Geheimnisnacht - Warhammer mod for CK 2 (drawing portraits, scripting events, coding mechanics, writing lore, checking characters etc. etc.)
Sweet Arabyan Nightmare - Warhammer mod AAR - Nominated WritAAR of the Week 31/05/2015, Nominated Weekly AAR Showcase 14/06/2015
Hypercoil: Origins of the Sheelikoi - Stellaris AAR
Stranded: An Asari Web Revolution - Mass Effect Stellaris AAR - Nominated WritAAR of the Week 05/07/2016
My CK2 Portrait Sets - Elves, Dwarves, Orcs, Goblins, Daemons, Vampires, Lizardmen, Beastmen, Treemen, Humans and more.
My Stellaris Portrait Sets - Eldar, Asari, Quarians, Serpentoids, Holofrixit, ALL OF THEM
My Custom Lore - Cathay & Jade Vampires, Araby & Mahtmasi Vampires.
Reactions:

Will we be able to mod things with respect to regions? Specifically, I'm thinking whether you can have cultural unit buildings be specific to regions rather than culture, if you wanted, so that, say, everyone in India could build Elephant buildings if they wanted, but no one outside of India?
Reactions:

Can you tell us something about the history files? What have changed? Have you cleaned up the character files like you did with the Iberian cultures in the Charlemagne patch?
Reactions:

Anyone want to speculate on what the 'expansion-related fort feature' is?
Reactions:

If you build forts in occupied enemy territory, what happens when the war ends? Will they be destroyed, or passed to the province owner (which might be your enemy, or you if your war was for that province)?
Reactions:

Cymsdale said:
Anyone want to speculate on what the 'expansion-related fort feature' is?
Click to expand...

I wonder if it might involve forming "bottlenecks" like with EU IV in Common Sense.
Toggle signature
"For a brilliant attack you calculate how many men can the machine gun kill and you launch an attack with a superior amount of men: someone will get to the machine gun." - gen. Luigi Cadorna in "Lettere"
Reactions:
Show hidden low quality content
You must log in or register to reply here.
Share:
Facebook Twitter Reddit Tumblr WhatsApp Share Link
Top Bottom