Jump to latest Follow Reply
Menu
Install the app
You are using an out of date browser. It may not display this or other websites correctly.
You should upgrade or use an alternative browser.
Crusader Kings II 69410 Bug Reports 19651 User Modifications 10445 Suggestions 5849 Tech Support 6309 After Action Reports
Previous dev diary Next dev diary
Show only dev responses
Second week and a second dev diary! We will continue for this week as well to discuss new patch features and changes.

I'll start with some more quality of life changes we've done with the right-click menu to make interactions with various entities in the game even more smooth. For starters we've finally removed the capital letters in the tooltip to hint about how to now interact with characters, but that's not really a big deal. We have also extended the menu to now include actions such as plot to kill in this menu to make life a little bit easier. 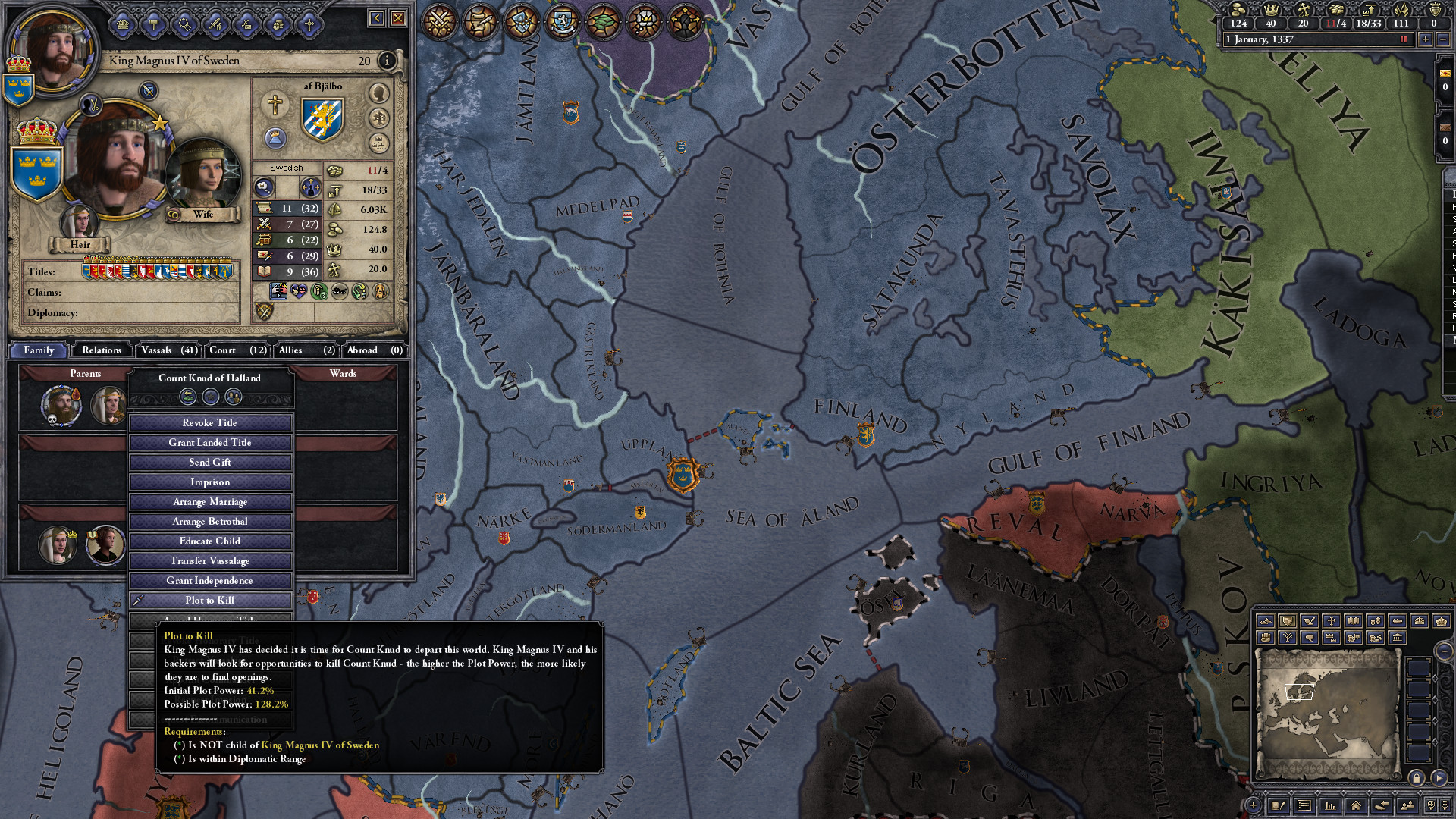 But we didn't end there because we also felt that you should be able to interact more with holdings and titles so we added it to them as well, including a decision to switch what you want as your capital holding. Obviously the bishopric of Uppsala should be the capital of Sweden now that the capital holding type doesn't matter for government anymore. 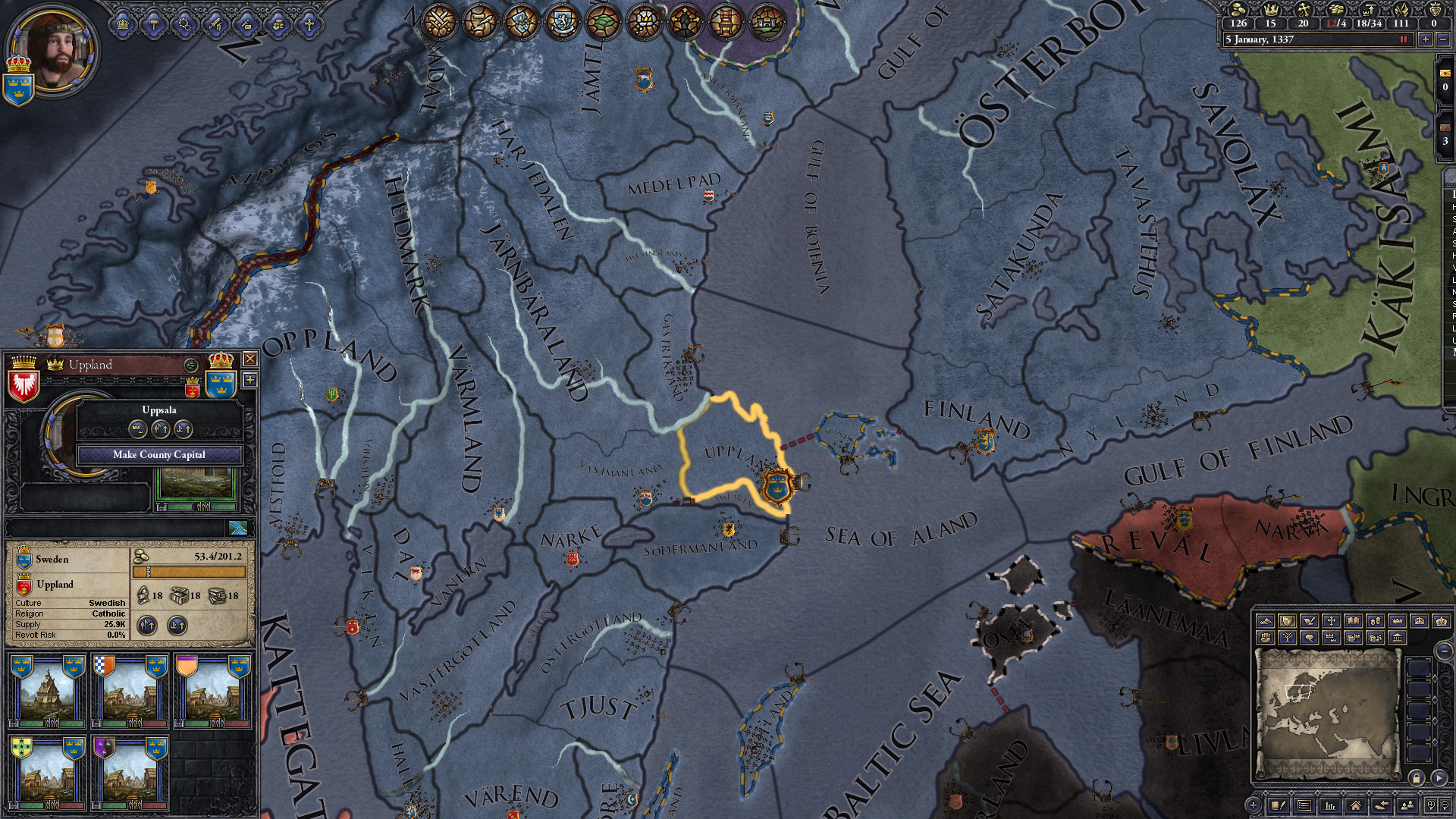 There's also a thing that has been very difficult to do in Crusader Kings 2 is to get a visual overview of your realm and its hierarchy which is why we have merged the Independent Realms mapmode and Direct Vassals mapmode into one superior mapmode which combine the both plus some more. Let's have a look at the Holy Roman Empire and his realm. 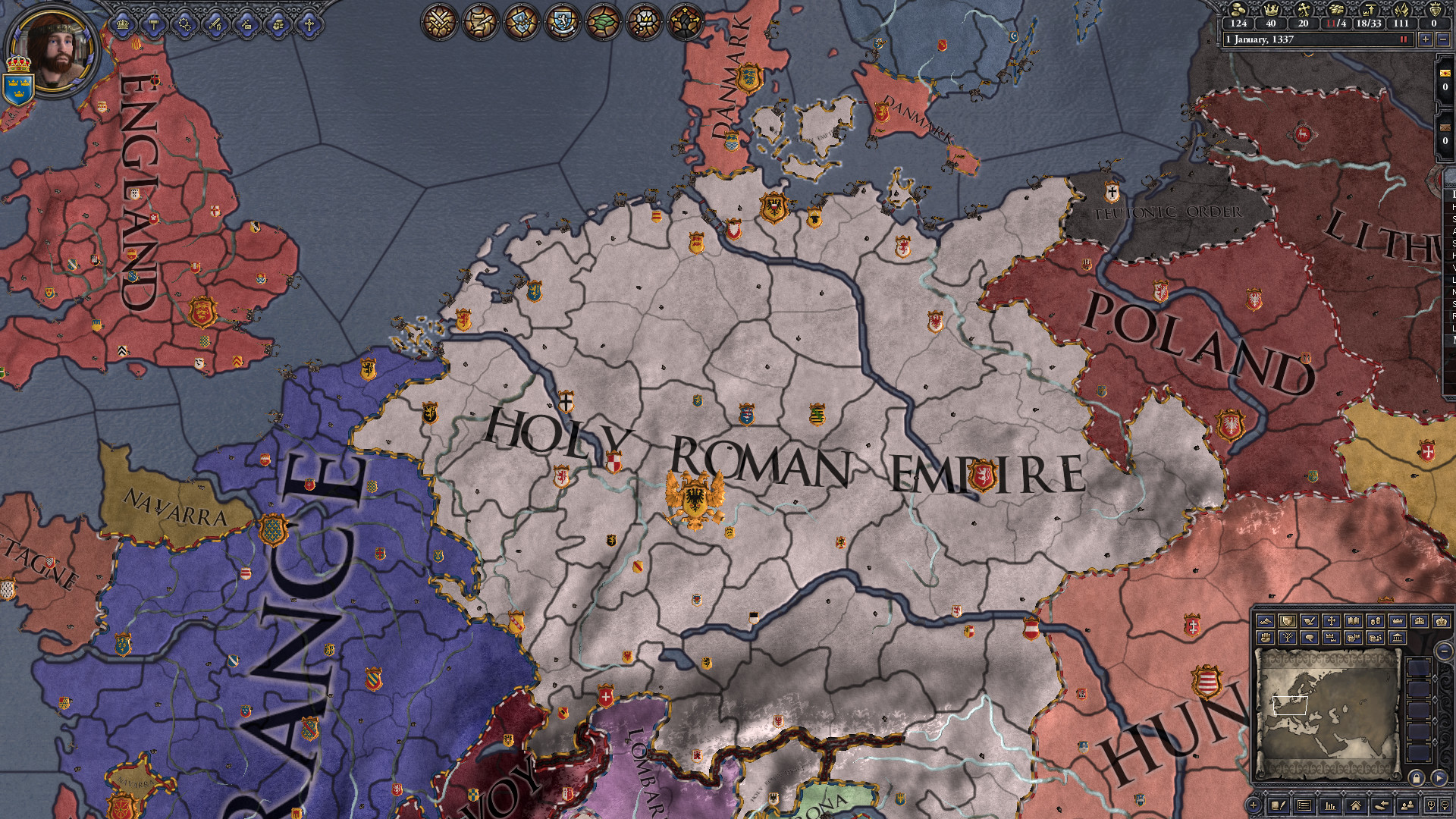 To now see the breakdown of this realm you Ctrl+Left Click on a province on the map belonging to the Empire and it will break up in-front of you to show you what hides within. Showing you the various duchies and counts beneath the Emperor. Pretty standard to how the Direct Vassal mapmode works but you can isolate it to one realm at a time. 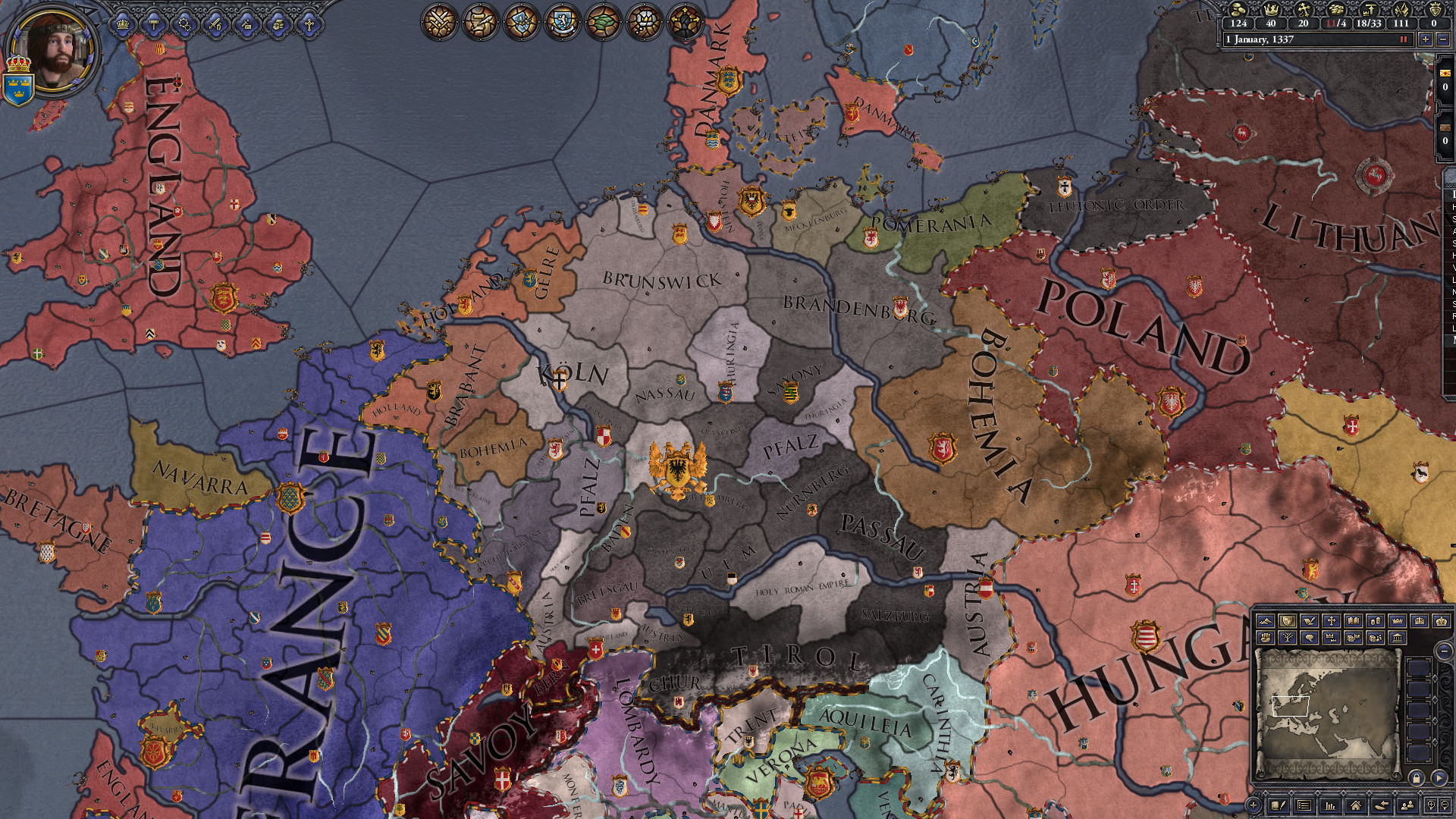 But let's say you want to look deeper into the hierarchy and break up the Kingdom of Bohemia to view what duchies and counties that it contains? You just click it again and this sub realm will also be broken apart to reveal the King's own direct vassals letting you examine your vassals vassals. 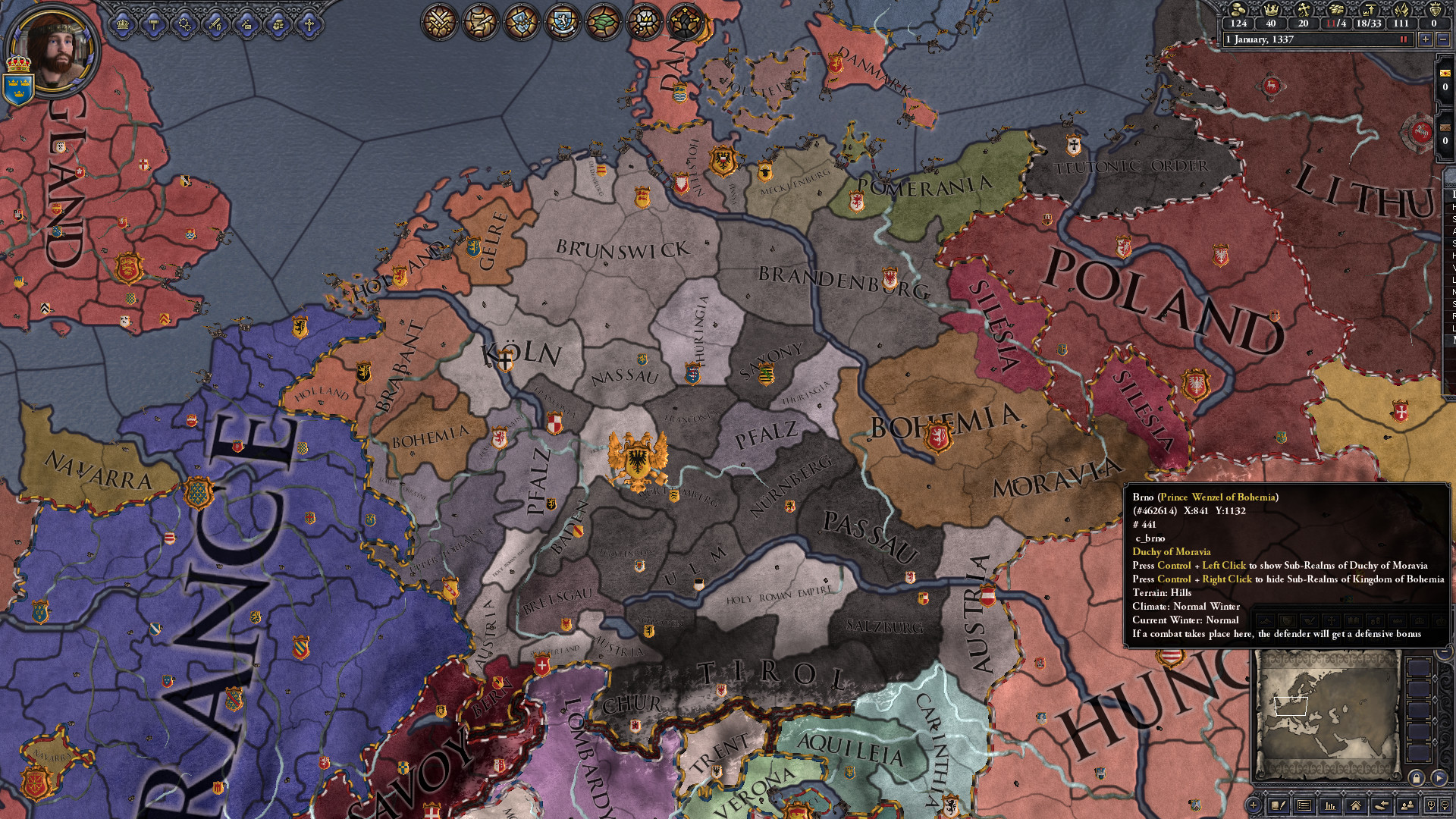 
- Several Lovers events now checks that ruler/spouse/lover isn't incapable/imprisoned
- Rügen, Öland and Djerba are no longer considered to be ocean terrain provinces.
- You'll no longer try to talk to your dead children when you have the family focus.
- It is now possible to gain the Crusader/Mujahid trait as a character of any religion participating in a Crusade/Jihad.
- To become a cardinal you have to be within the pope's diplomatic range
- Can no longer enforce plot to take vassal land if he is in revolt.
- Go tiger hunting no longer disappears after creating a custom Empire in India.
- Fixed get married ambition for homosexuals.
- Now we have visual indicator when settlement slots are being used by tribals
- Paranoid parents should no longer worry about potential plots against dead children.
- Lovers in prison can no longer get impregnated normally
- Anglo-Saxons are now also allowed to create the Kingdom of Saxony
Last edited: May 19, 2015
Click to expand...

Thanks! You're awesome!
Reactions:

I love that new realm structure map mode, so many possible uses for that.
Toggle signature
2016-08-25. Flanders is free. Never Forget.
Reactions:

Groogy said:
Obviously the bishopric of Uppsala should be the capital of Sweden now that the capital holding type doesn't matter for government anymore.
Click to expand...

No no no no! What are you doing? You're completely removing the politically important archbishopric of Uppsala.

Excellent! CK2 is turning from a great game to an even greater game!
Toggle signature
Check out my two total overhaul mods for EU4 v1.12.2, both set in the ancient era!

Getting rid of that obnoxious RIGHT-CLICK TO INTERACT is really the best part of this diary for me. Not that the other stuff isn't nice too.
Reactions:

Wow. Awesome changes, especially that mapmode - I think I was asking for something like this since 1.0

But... what are those new icons on character tab?

Edit: Ok, those are from last week, government type and Commander. I feel stupid now.

I smell a new campaign coming on...
Toggle signature
Sub-Groups and Unrest: A Cultural Concept for CK2​
Reactions:

Settlement slots being used by tribals?

stilgarpl said:
But... what are those new icons on character tab?
Click to expand...

The one above the face is likely a 'can lead armies' toggle.
Reactions:

Can you change the government type and county capital of your vassals? For example if you have trier as a vassal can you force this away from being a prince bishopry and make it so that it's a normal feudal county?

excellent, the new map mode hierarchy change has been needed for over two years now!
Toggle signature
Adding breadth and depth to the medieval aspects of economy, technology & the military - Magnate Lords A mod for CK2 ​
Reactions:
I

That new mapmode is everything I've ever wanted. I love you.
Toggle signature
BlindRaven on YouTube/Twitter. Watch my videos!

Let's Play Victoria 2: Krakow: Attempting to restore the glory of the Poland-Lithuanian Commonwealth

Yeah new diary
Toggle signature
What A Time to be Alive

Lord of the PC master race