Jump to latest Follow Reply
Menu
Install the app
You are using an out of date browser. It may not display this or other websites correctly.
You should upgrade or use an alternative browser.
Previous dev diary Next dev diary
Show only dev responses 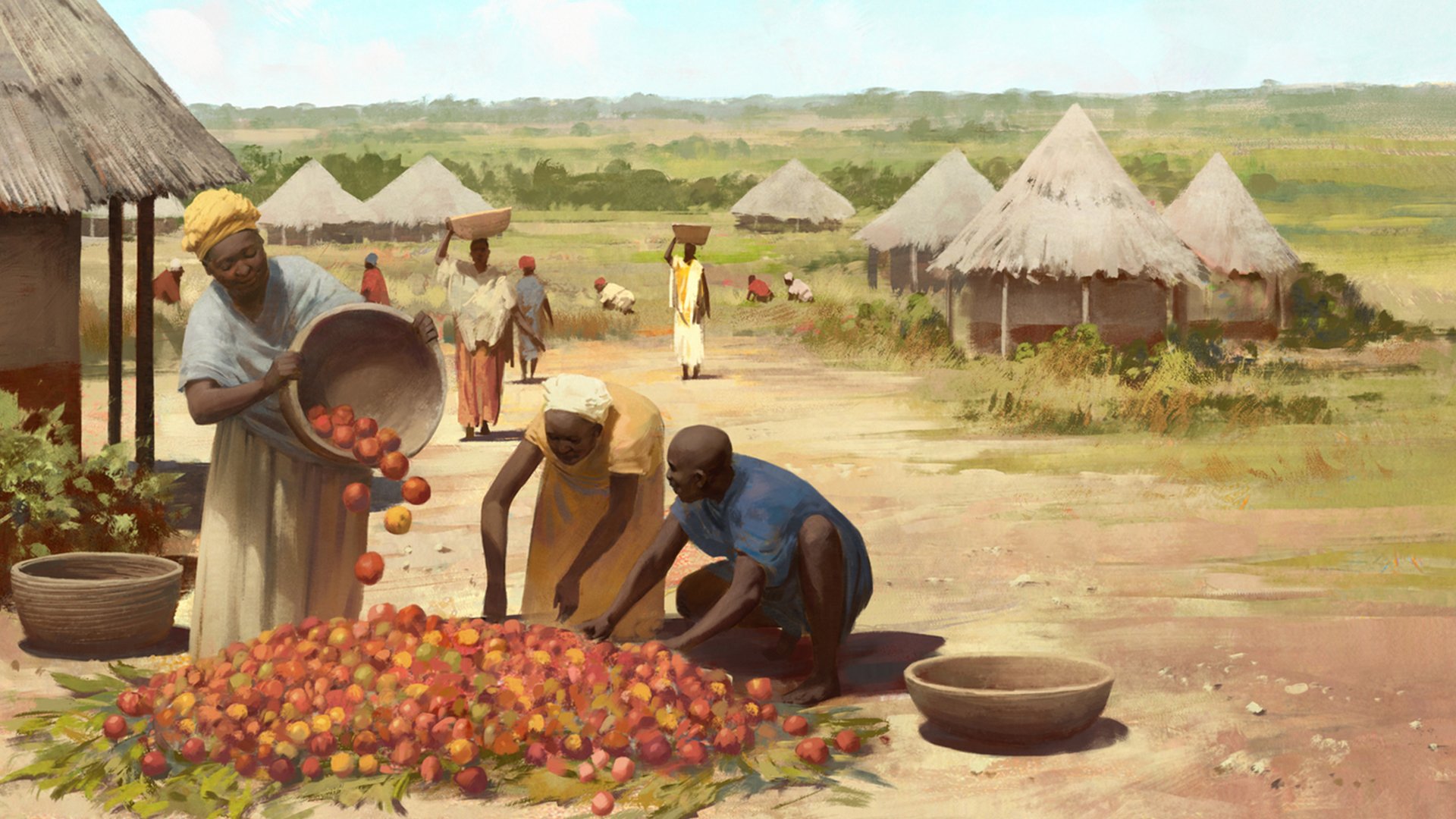 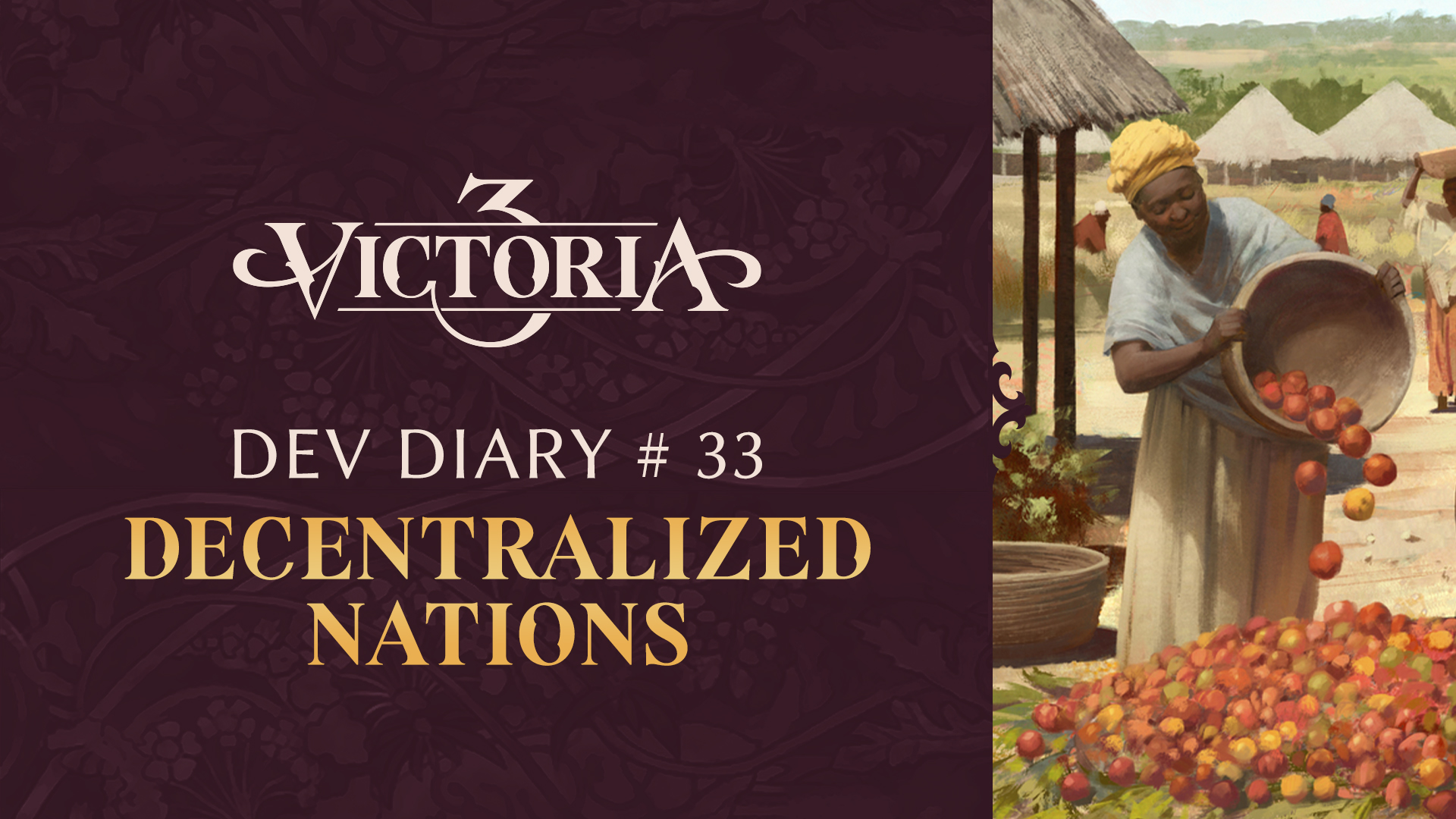 ​
Hello folks, I'm Ofaloaf, one of the content designers on Victoria 3, and I'm here today to talk about decentralized nations. What are they? Why are they there?

To start with, let's talk about what came before - let's take a quick look at what Victoria (well, Victoria: Revolutions) and Victoria II did when it came to regions outside of traditional imperial homelands. 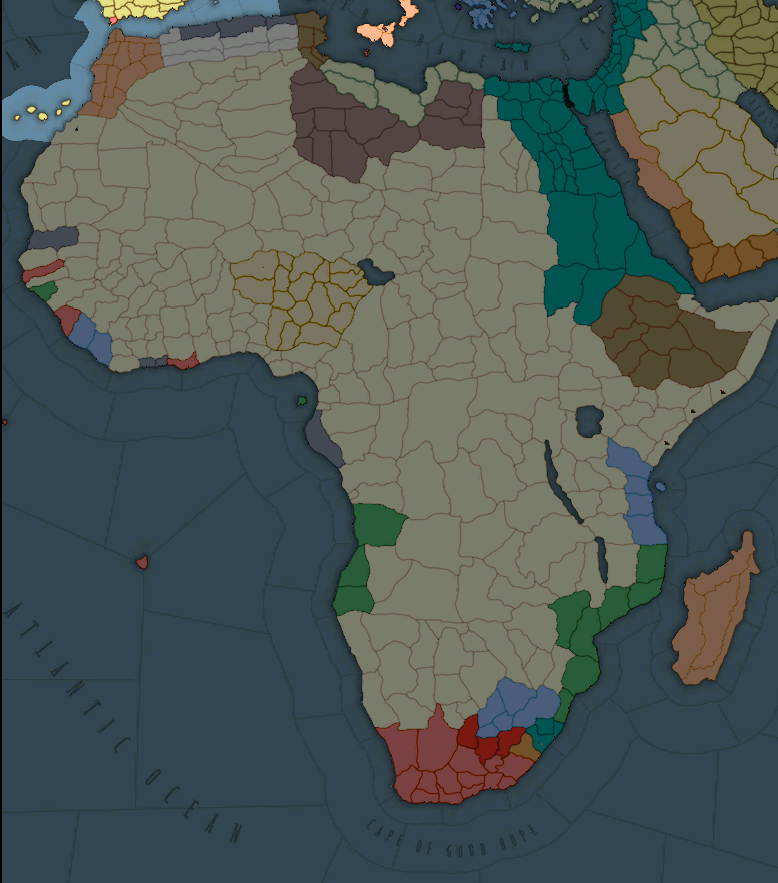 ​
Above is Africa as it was represented in Victoria: Revolutions. Most of the continent is open territory for any Great Power to colonize. There's people living there, but they don't do anything. Outside of a few limited cases, like Sokoto, they're represented by… nothing. They do not do anything on their own, and when added to a colonizing power, they just immediately become pawns in the imperial game and don't really care for independence or their own homeland.


Africa in Victoria 2: Heart of Darkness 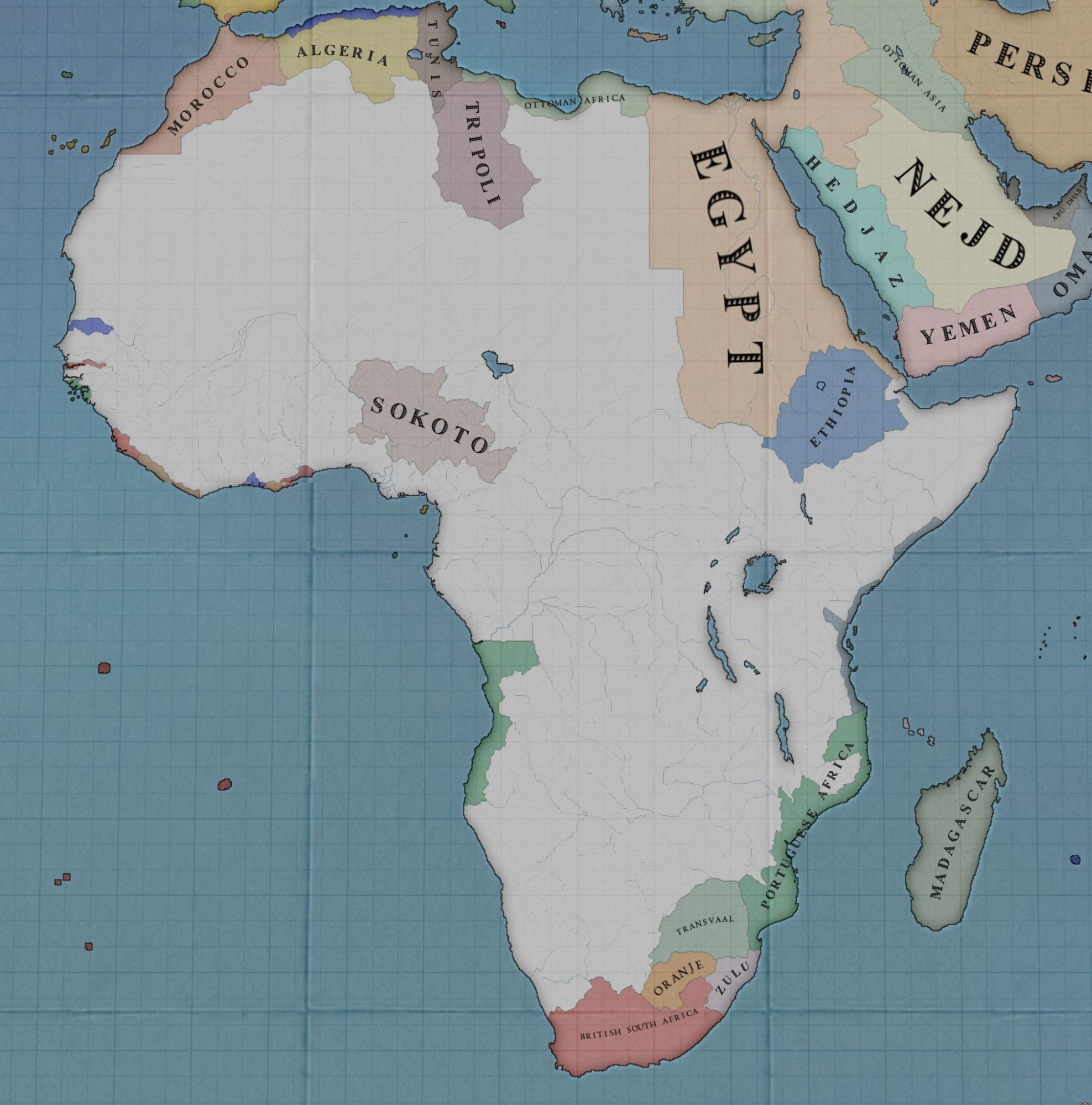 ​
The same is broadly true in Victoria II. Regions historically colonized by imperial powers, such as most of Africa and parts of the Americas, are represented as unclaimed swathes of land just waiting for an empire to come by and colonize them. The people who live there do not care who marches in, and will just be members of one empire or another forevermore after they are colonized. It's… a model that could use some improvement. It didn't do justice to the people who historically lived there, and, frankly, it made colonial gameplay kind of boring.


Africa as it currently stands in Victoria 3 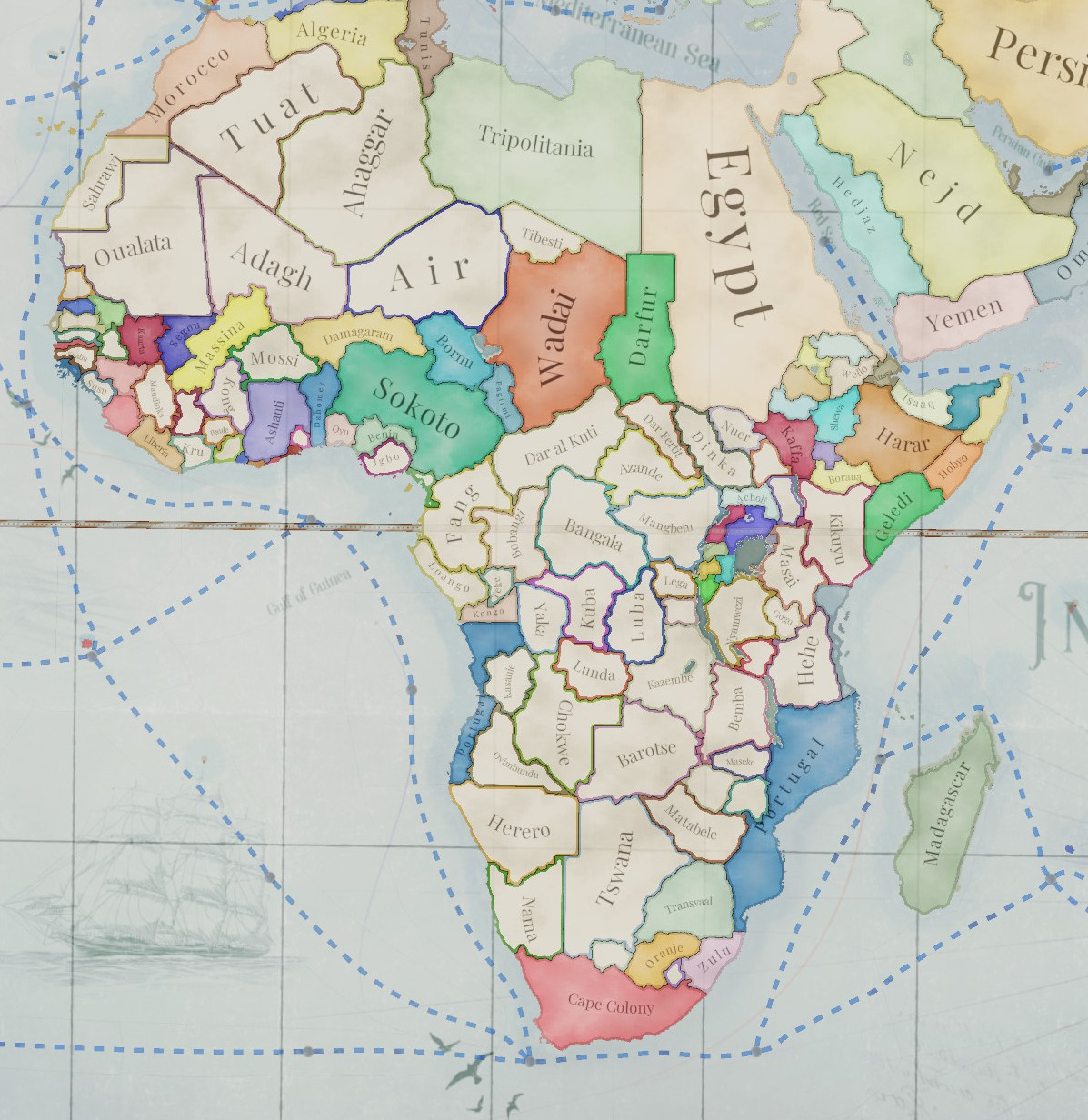 ​
In Victoria 3, decentralized nations exist to address both the issues of gameplay and better representation of indigenous peoples. No matter where an empire tries to colonize, someone already lives there. They're organized, although they don't have the same level of international recognition and administrative organization as, say, Congress of Vienna attendees.

No formal declaration of war needs to be made in order to make an incursion into the territories of decentralized nations and start colonizing, although the deeper you colonize into a decentralized nation's lands, the more likely it is a diplomatic play will kick off where the decentralized nation starts a real war of resistance against you. Even if a colony is successfully established, the people living there aren't just pawns - they'll remember that they weren't always colonized subjects, and just like any other part of an empire they'll agitate for independence if conditions are right.


Mapping these nations has been a challenge. We essentially started with the Victoria II map as a base to build off of, which meant we had a lot of work to do just gathering information for peoples across the globe. Records of who lived where, and how many people lived there, have been difficult to obtain for some regions. Gameplay considerations have also driven some design choices - let's look at North America for an example of that process.


Behold the snippet of a beautiful draft image used when presenting the original proposal. 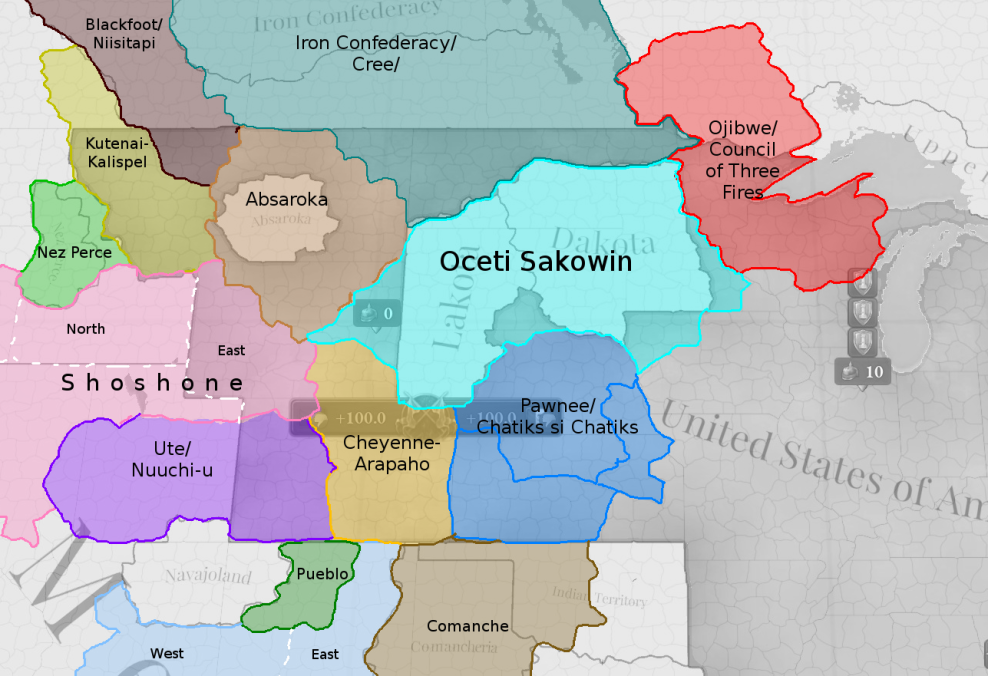 ​
This is part of one drafted proposal for the implementation of decentralized nations in North America. There's already some compromises in this version - peoples have been consolidated into some larger polities, and some state borders have been followed largely because having just one or two provinces on the other side of a state line can create regions too small to provide anything or anybody - 400 pops living in State X aren't able to provide enough men to contribute a single battalion to a native uprising, among other things. This design isn’t just for the decentralized nations - it is something we also do elsewhere in the world when trying to balance historical accuracy with gameplay, although we of course try to avoid steering too far away from actual history.


North America after the revised proposal was implemented. 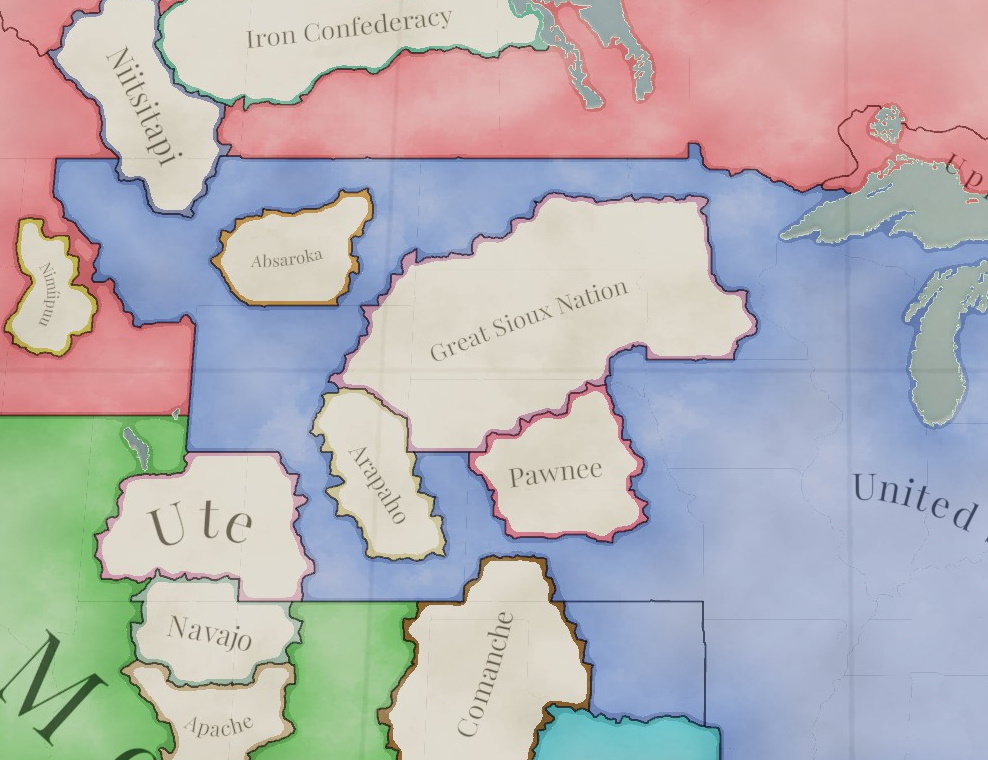 ​
Even with these considerations, we still ended up pursuing a modified version of that proposal that did more to preserve the borders of larger imperial borders - we didn't want too many avenues for the United States to colonize its way into historical Canadian territories, or for Mexico to colonize its way into Minnesota. I do miss the Council of Three Fires and hope I can get it back in, but that depends on getting a design hammered out that works with the considerations and limitations we just went over above.


Other regions have had design considerations made in their implementation, too. 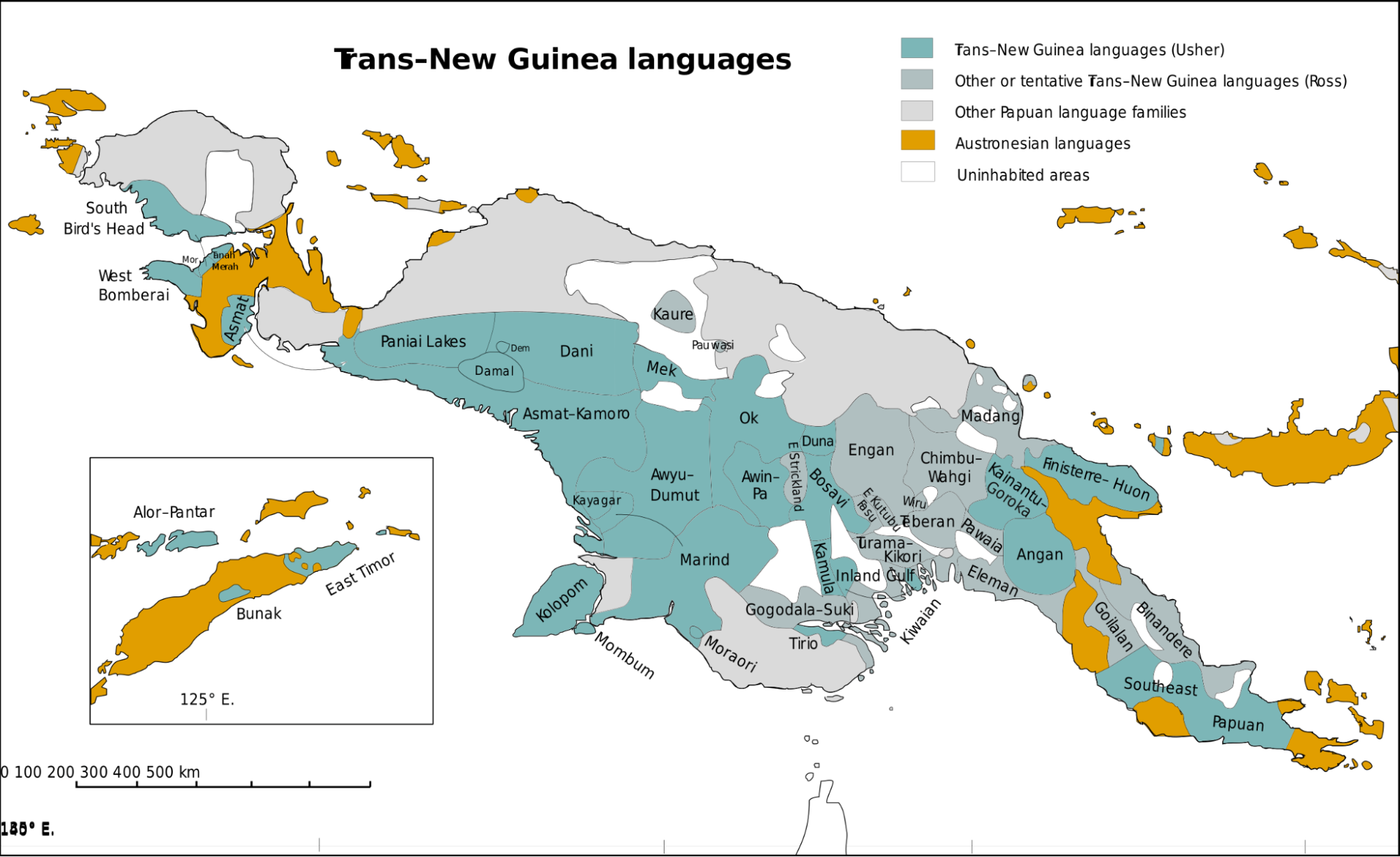 ​
I'm gonna be real with you, there was no way we were going to accurately and sufficiently map out all the peoples of New Guinea. That's one region where I think we've probably done the most consolidation, but I think it was necessary in order to provide anything like the combined strength needed in order to give the indigenous peoples of New Guinea a decent punch in case of a native uprising. 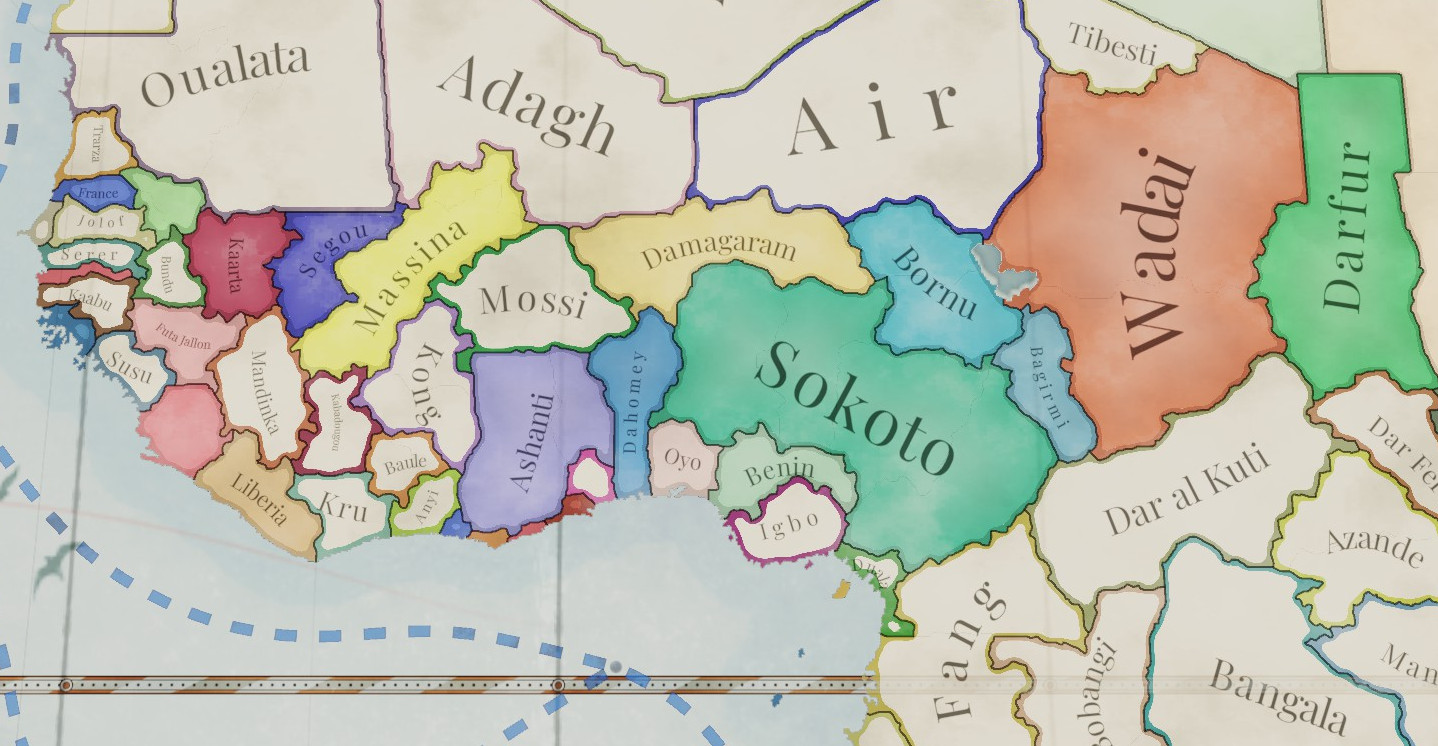 West Africa had many design decisions made since it was first mapped out for V3; as mentioned above, the original map built off of was Victoria 2's, so the first thing done was just getting some entity everywhere on the map. This early draft has been revised and revised and revised again, and probably will still be subject to further revisions. Countries that were first marked as decentralized have been centralized, such as the Ashanti Empire, and tag additions and renamings are a thing that's happened already and will happen again, as we continue to invest time in research and listen to feedback from our fans.

Decentralized nations give life to regions that have been treated as blank slates up 'til now. Mapping them out, getting them right, and balancing the challenges of precision and gameplay are a constant struggle, one which we are constantly tackling and working through. The result of all this, though, is a world that feels much more alive, one that I hope you'll be happily exploring at Victoria 3's release.

I'm terrible at transitions so let me just say that next week is @neondt's dev diary, and we're going to ship some monumental information there! And by that I mean it's on canals and monuments.
Reactions:

Captain Frakas said:
Wouldn't "stateless nations" be a better label to describe what developers puts under the "decentralized nations" label?
Click to expand...

Please Please include this! It's the only scientifically valid and gameplay-wise unambiguous term, to avoid confusion with decentralized territories
Toggle signature
"Every unit must know, before they move-fight, how that little stackwipe fits into the larger world conquest. "
Reactions:
M

Eddie121 said:
Please Please include this! It's the only scientifically valid and gameplay-wise unambiguous term, to avoid confusion with decentralized territories
Click to expand...

I very much disagree that it's a gameplay-wise unambiguous term as it would inherently be a contradictory name since these nations actually do have states. And I have never heard the term decentralized territories referenced in the game so I'm confused why there'd be confusion between the two names.
Reactions:

MylesSCP said:
I very much disagree that it's a gameplay-wise unambiguous term as it would inherently be a contradictory name since these nations actually do have states. And I have never heard the term decentralized territories referenced in the game so I'm confused why there'd be confusion between the two names.
Click to expand...

The Barcelona-based Sport: “Football punishes Barca - Unjust, cruel, horrible, unmerited. Any adjective is not enough to define the incredible elimination of Barca at the hands of Chelsea.” “The most inventive and clever fans in sport.” Fire_Unionist

Do you mean unincorporated states? Because they already have their own term.
Reactions:

Baneslave said:
And I can't even really think of what the gameplay would actually be for decentralized entities.
Click to expand...

I think the idea of an entity managing to develop a nation identity in the face of colonization, resisting it and then moving forward to advance towards in the modern world colony-adjacent of sorts. Even if that means overthrowing it in the midst of what presence colonization has since here it doesn't seem to actually just take over completely but simply has presence and control.

Or even living under the influences of colonialism and then discovering independence after.
Last edited: Feb 20, 2022
Reactions:
V

I think the native independence shloud seriously consider for historical. Native who considers to independ are utill 19th.
Reactions:
V

If they want to independ, they have the weapon which their colonial country have is not reasonable. So they should buy the weapons from others county or build their factory, then training the soldiers can use weapons.
I think not only native, but also rebel should do this to get weapons. That's reasonable. If not, British won't become the biggest country in history. They should always get troubles from rebel and natives, because they have weapons and elite soldiers as British have
C

The map of vic3 looks like cartoon art style (similar to hoi4) and makes it look non-serious to me personally. A more serious art style implies an older person not feeling like the game is a gimmick. Why not make the game feel like its an attempt for detail, with sharper borders like the 18th century map below. colonial_administrator said:
The map of vic3 looks like cartoon art style (similar to hoi4) and makes it look non-serious to me personally. A more serious art style implies an older person not feeling like the game is a gimmick. Why not make the game feel like its an attempt for detail, with sharper borders like the 18th century map below.

There's a mod in this style for EUIV, so I don't doubt one can make a version like this as well.

colonial_administrator said:
Why not make the game feel like its an attempt for detail,
Click to expand...

The underlying representation of the world map in Paradox GSGs set on Earth is a set of rectangular bitmap images representing various layers of the map (provinces, altitude, rivers, terrain, probably a few others I've forgotten about).

Each province has a colour, and each pixel on the "province" layer of the map is coloured to match exactly one province. Borders run along the boundaries between pixels, with some kind of smoothing function when drawing them on the screen to avoid hard squared-off steps when borders (as they generally do) do not perfectly correspond to lines of latitude and longitude.

This, as with so many things in the design of computer strategy games, is a compromise between a number of different concerns.

(As for the watercolour effect, that doesn't bother me at all, and I'm a 45-year-old lover of maps. That map you've embedded an image of is quite nice, but I don't think it's a particularly good target for what the in-game map should look like.)
Toggle signature
Before you accuse Paradox of selling out with the design of Vicky 3, go listen to track 7 on Tool's Ænima, then reflect.
If you don't want politics in your games, play Tetris.
Ceterum censeo Featured Content banner delenda est.
Reactions:
Show hidden low quality content
You must log in or register to reply here.
Share:
Facebook Twitter Reddit Tumblr WhatsApp Share Link
Top Bottom