Jump to latest Follow Reply
Menu
Install the app
You are using an out of date browser. It may not display this or other websites correctly.
You should upgrade or use an alternative browser.
Previous dev diary Next dev diary 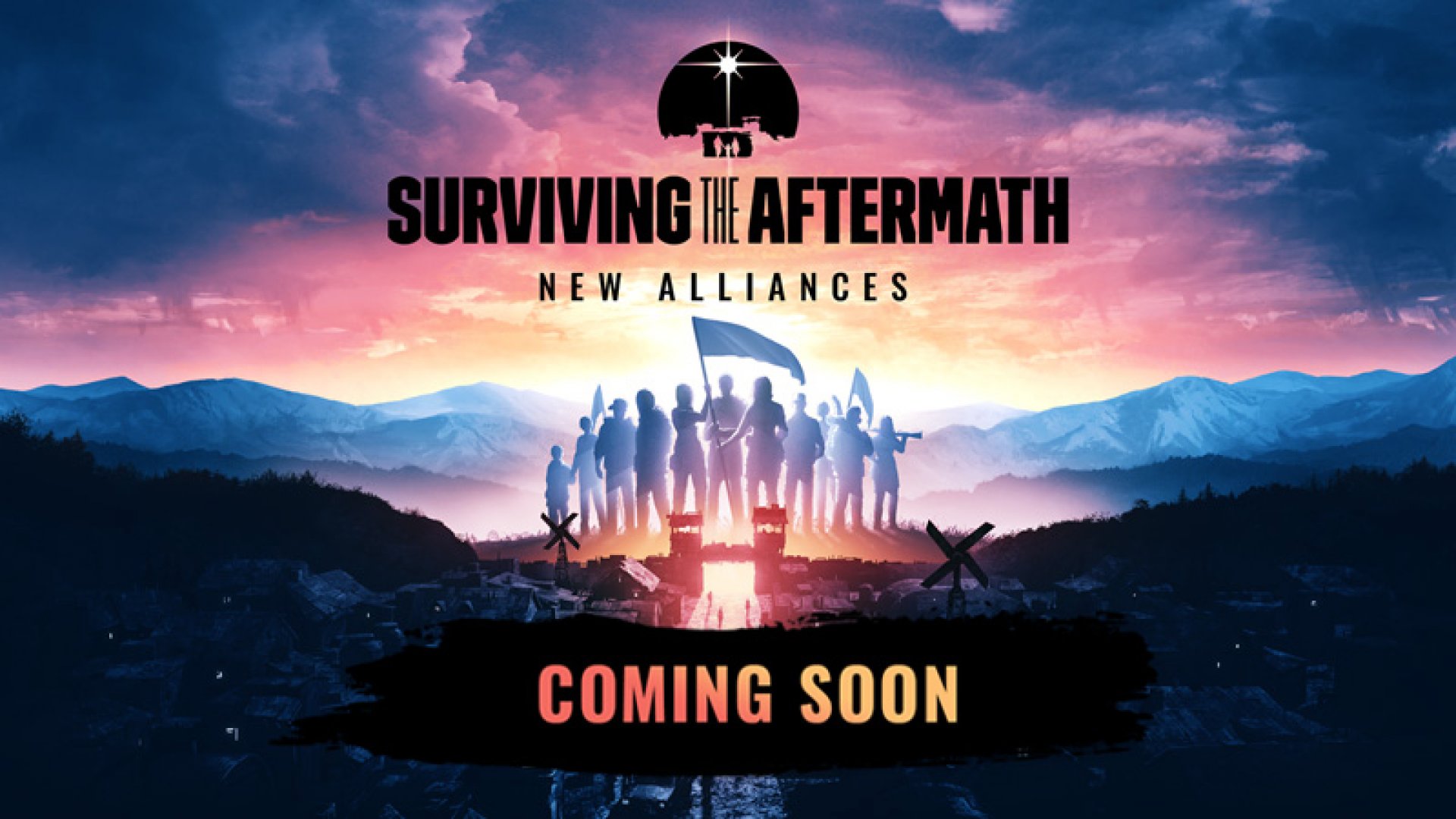 We’re very excited to reveal what we’ve been doing amidst all the updates up to this point. It’s the first part of our Season Pass and will be released very soon. Here are some of its key features which gives the game’s sandbox a whole new dimension with more replayability and new challenges!

Surviving the Aftermath: ”New Alliances” adds an in-depth layer to world map societies and a new, powerful rival faction as your adversary. Help your neighbours deal with new threats and gain unique rewards while uniting the wasteland under a single banner! Or use your specialists to conduct covert missions inside other societies for your own gain…​

Assist societies and complete requests to gain enough reputation to ally with them. Build embassies to unlock unique permanent bonuses and buildings for your colony. Help your alliance population grow and bring the wasteland on your side by forming a federation!​

A powerful opposing faction has taken an interest in your part of the world. Their control over societies grows every time you ignore or fail requests, so fight back by helping those in need or use specialists to reduce rival influence.​

Your specialists can now embark on covert missions within societies to steal resources or incite its population. But beware as the same tricks can be used against you! Build new protective buildings such as Surveillance Vans and Anti-propaganda Towers to defend against these attacks.​

Bandits, society convoys and even animals are now active on the world map. Move out of their way or risk an attack. Raid convoys for loot or defeat bandits for loot and reputation. Hostile units can even take over your outposts, so be prepared to clear them out to resume production.​
Reactions:

For me the overworld was the least interesting part of Aftermath, I hope there's more on the city building side in this.
Reactions:

Some interactivity on the world map sounds great - it's all very static right now. I hope there is some new colony building content too.

Is there going to be a way to permanently secure an area (by destroying a bandit hideout or an animals lair) or are those patrols going to be an eternal annoyance?

I like the idea of having new areas be more dangerous to traverse through. I also like clearing outposts to make an area safe. Fits great with the setting.

But if this is going to be one of those "every 20 turns you have to send a guy to that one outpost in the lower corner of the map because some rats spawned out of nowhere again" mechanic, I'm definetely going to pass on this one.
Toggle signature
“And all those exclamation marks, you notice? Five? A sure sign of someone who wears his underpants on his head.”
Reactions:

Will there be different kinds of federations? If you take "The Walking Dead" for example, there exist coalitions of equal survivor communities, while other groups like the Saviors would be closer to a Hegemony from Stellaris with one group ruling over the others.
Toggle signature
Ĉiuj vivantaj estaĵoj estas denaske liberaj kaj egalaj laŭ digno kaj rajtoj. Ili posedas racion kaj konsciencon, kaj devus konduti unu al alia en spirito de frateco.

Want to share your favorite self-made empire in Stellaris? https://forum.paradoxplaza.com/foru...self-created-empires-and-biographies.1083805/
I

I am NOT crazy about phrases like "surveillance vans" and "anti-propaganda towers."

Look, I know that there are some high profile games out there, including this game's main competitor, that have gotten rich off of giving people excuses for bad behavior, for making them make evil choices and then telling them that they had no other choice.

Don't go down that road, please. One of the first things I said in my pre-release Steam review of this game was that I liked the fact that making the moral choice was almost always the best choice. Don't sell out and make this game yet another *boring* dystopia.

*Edited to add:* I haven't played in a while, but I remember that in a lot of versions of Civ, if you have citizen happiness high enough, they become functionally immune to enemy provocateurs and spies. I sincerely hope that's how it will work here, too, that the only players who *need* to deploy surveillance vans and anti-propaganda towers are the ones who refuse to invest in shrines, libraries, etc.
Reactions:
J

I am sold. Its extending the current world to interact with the other societies you have discovered in much better way than just trading. Maybe increase bonuses for your specialists like extra attack or scouts take less turn movement. Fighters become veterans via a tier system of battles won though attacking or defending World of posibility is endless. We do need a bigger map in future.
Show hidden low quality content
You must log in or register to reply here.
Share:
Facebook Twitter Reddit Tumblr WhatsApp Share Link
Top Bottom