Jump to latest Follow Reply
Menu
Install the app
You are using an out of date browser. It may not display this or other websites correctly.
You should upgrade or use an alternative browser.
Previous dev diary 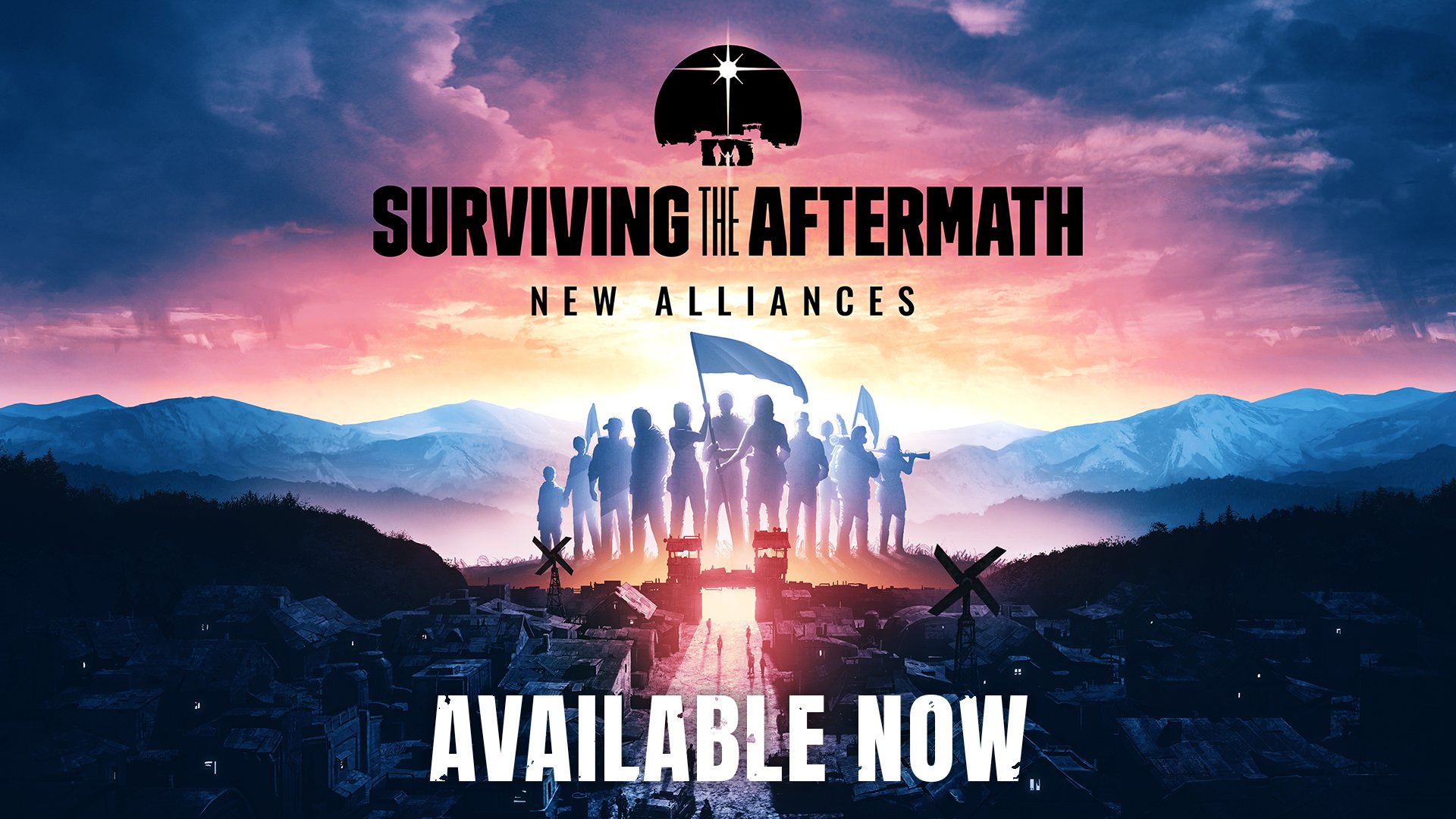 Greetings survivors!​
“New Alliances” is here and we can finally share more details about what it means for Surviving the Aftermath. We’ve already teased its contents a bit, so let’s dig deeper into what makes it special. Society requests, alliances and federation add a fresh dimension to societies, while roaming bandits, covert missions and a new powerful Rival faction challenge you in new ways.

IMAGE: Keyart​
New Alliances adds a new, more dynamic layer to the world map and how you interact with societies. Instead of just having nice trade partners, you can now befriend and eventually ally with them with the ultimate goal of creating a federation! To do this, you must help your soon-to-be allies by completing requests and assisting them against various threats in the wasteland. But if making friends isn’t your thing, you can raid their convoys for resources or have your specialists complete covert missions inside the societies to steal loot, science points and other benefits. But note that you’re not alone in your ambitions, as a mysterious Rival faction has taken an interest in your part of the wasteland. 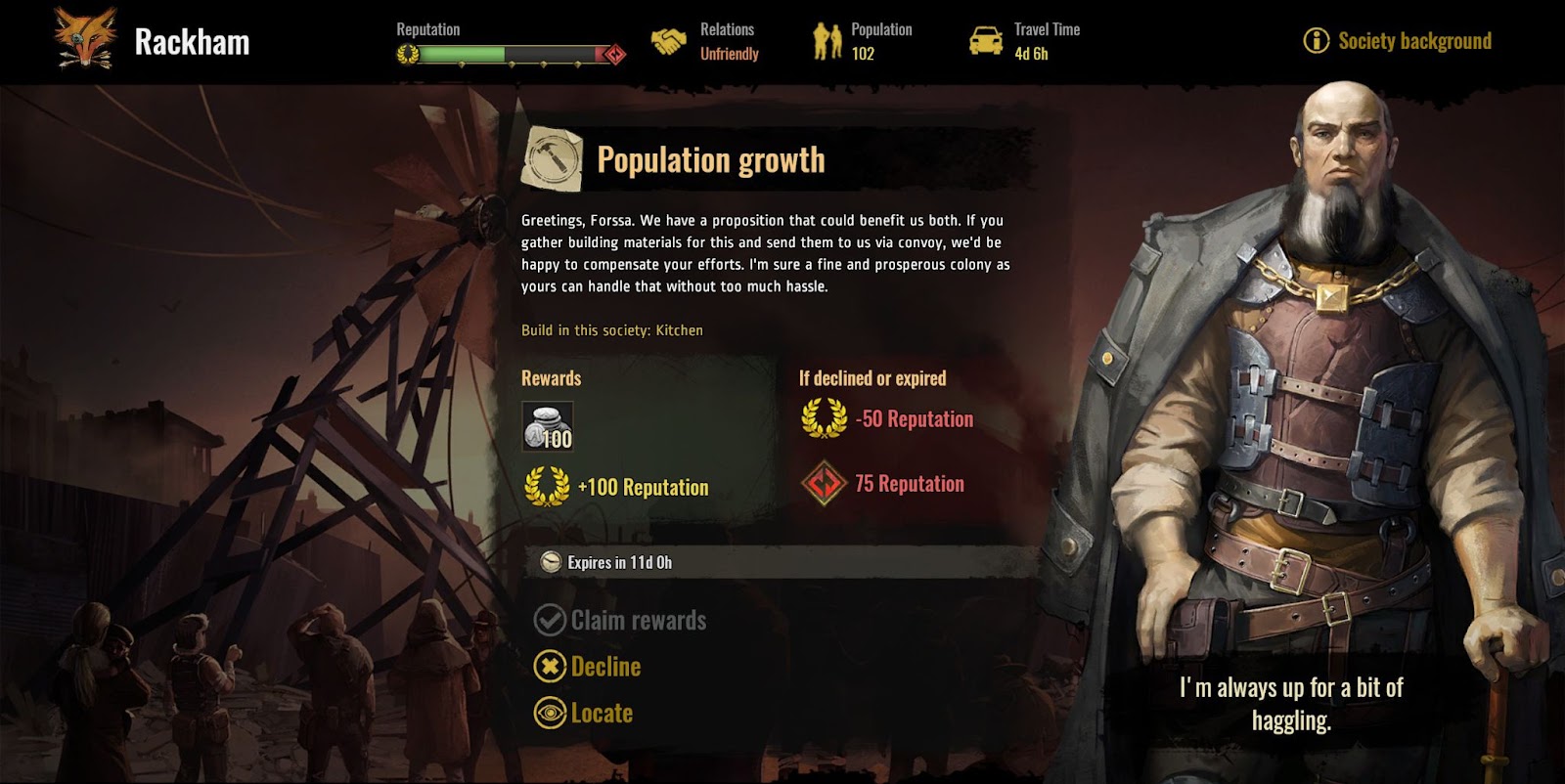 IMAGE: Build request​
Forming a federation and solidifying your status as its leader will take some time. Once you’ve met the first societies, a new society depot building becomes available. It allows you to construct helpful buildings inside societies to raise their population, protect them from bandit raids or provide alternative sources of science points and silver. You can construct these buildings for a society whenever you want, even if they haven’t specifically sent a request for them. In addition to building requests, societies might also ask you to hunt bothersome animals, deal with dangerous bandit forts or loan one of your specialists to them. 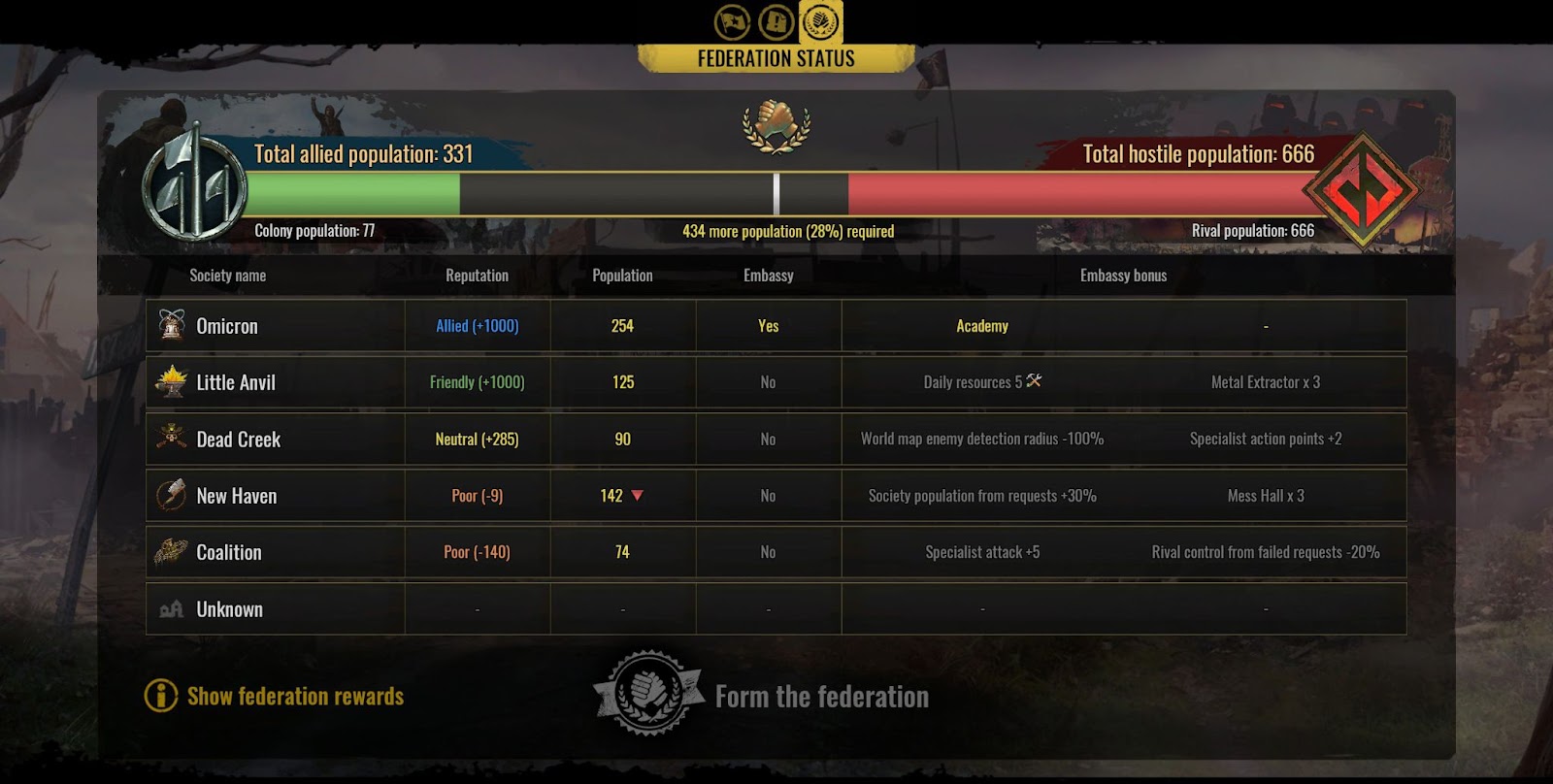 Each completed request gives you rewards and brings your two colonies closer. Once you’ve gained enough reputation, they’ll offer to ally with you and share their secrets after you’ve built their embassy in the colony. These unique, society-specific benefits range from nuclear power plant blueprints from Chemville to extra action points for every specialist from Dead Creek. Discover all the perks in the new federation status screen and choose which ones you want the most! New Alliances features eight new reward buildings and 13 permanent bonuses for your colony. 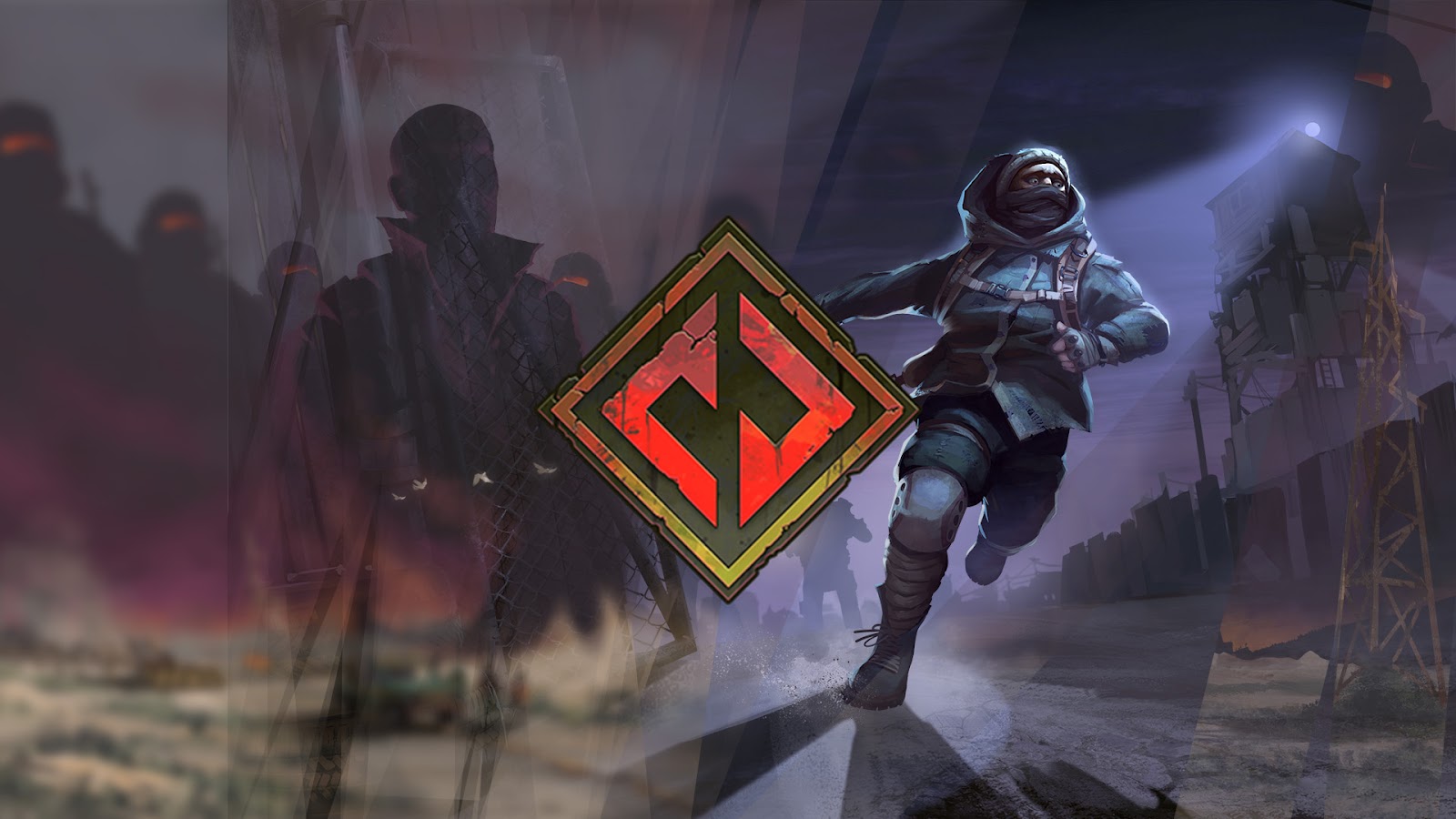 IMAGE: Part of the rival illustration with failed request​
But as you encounter more societies while still dealing with all the hardships of catastrophes and bandit assaults against your own colony, you’ll be forced to decide who to help and who’s plea for aid goes unheard. Each failed request pushes them closer to your Rival, who will turn them against you! To end their influence in the wasteland, you must create a strong federation with your closest allies.

To form the federation you must get the majority of the wasteland’s population on your side. Raise your allies’ population by constructing shelters and food production facilities while embarking on propaganda missions to draw people away from hostile societies. Once the majority has been achieved, you’ll be rewarded with sharing the spoils of war your Rival left behind along with other benefits. 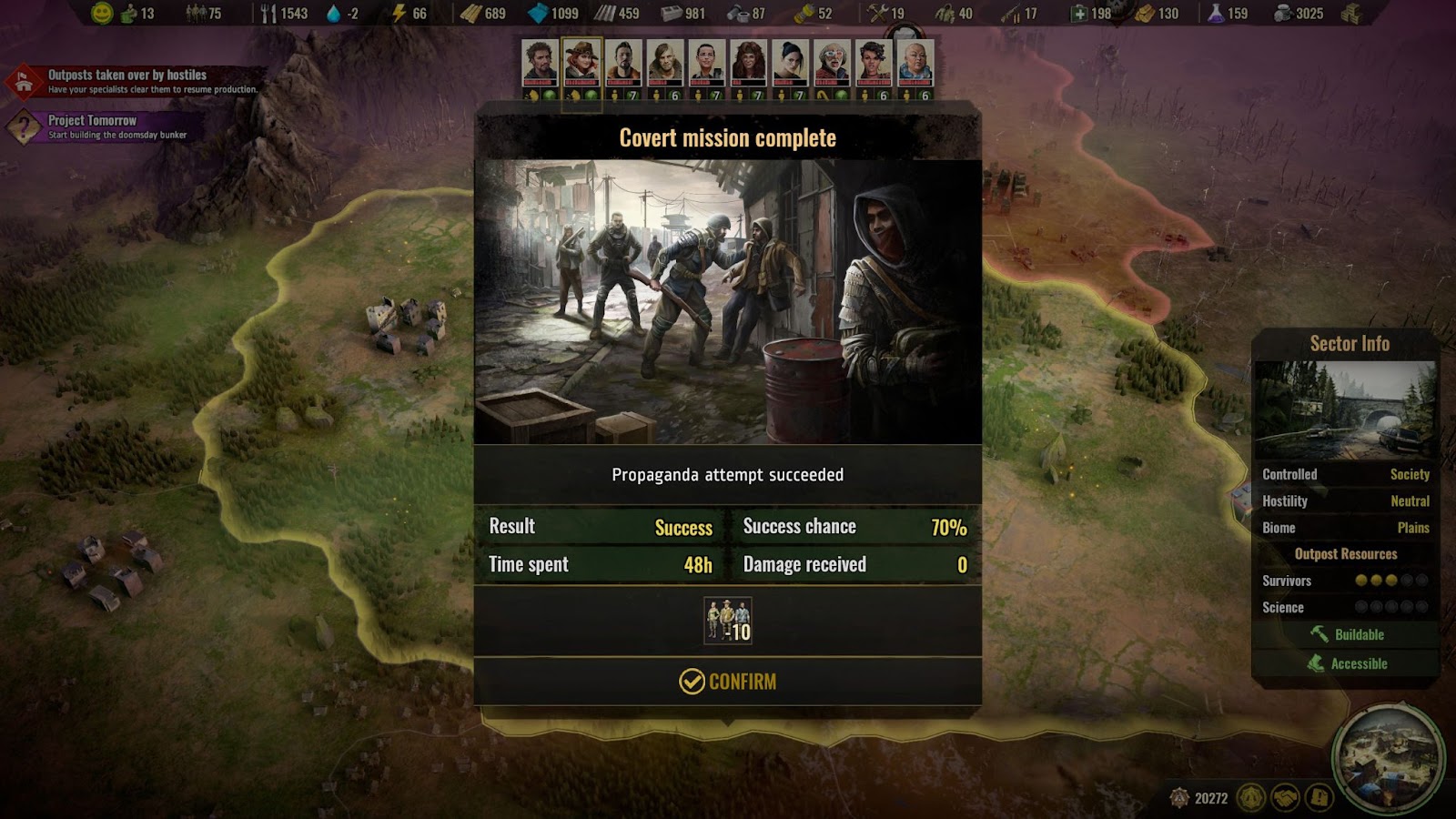 IMAGE: Successful covert mission end screen​
Another major aspect in New Alliances involves a bit more shadier tactics. Your specialists can now embark on four different types of covert missions against other societies for various benefits. You can for example steal science points for your research via espionage with your scientists or sabotage Rival operations with scavengers to reduce their influence. Different specialist types have a higher chance to succeed on these missions, so pick your operative carefully as failure means a big drop in reputation and a potentially lethal escape from the rather offended society. 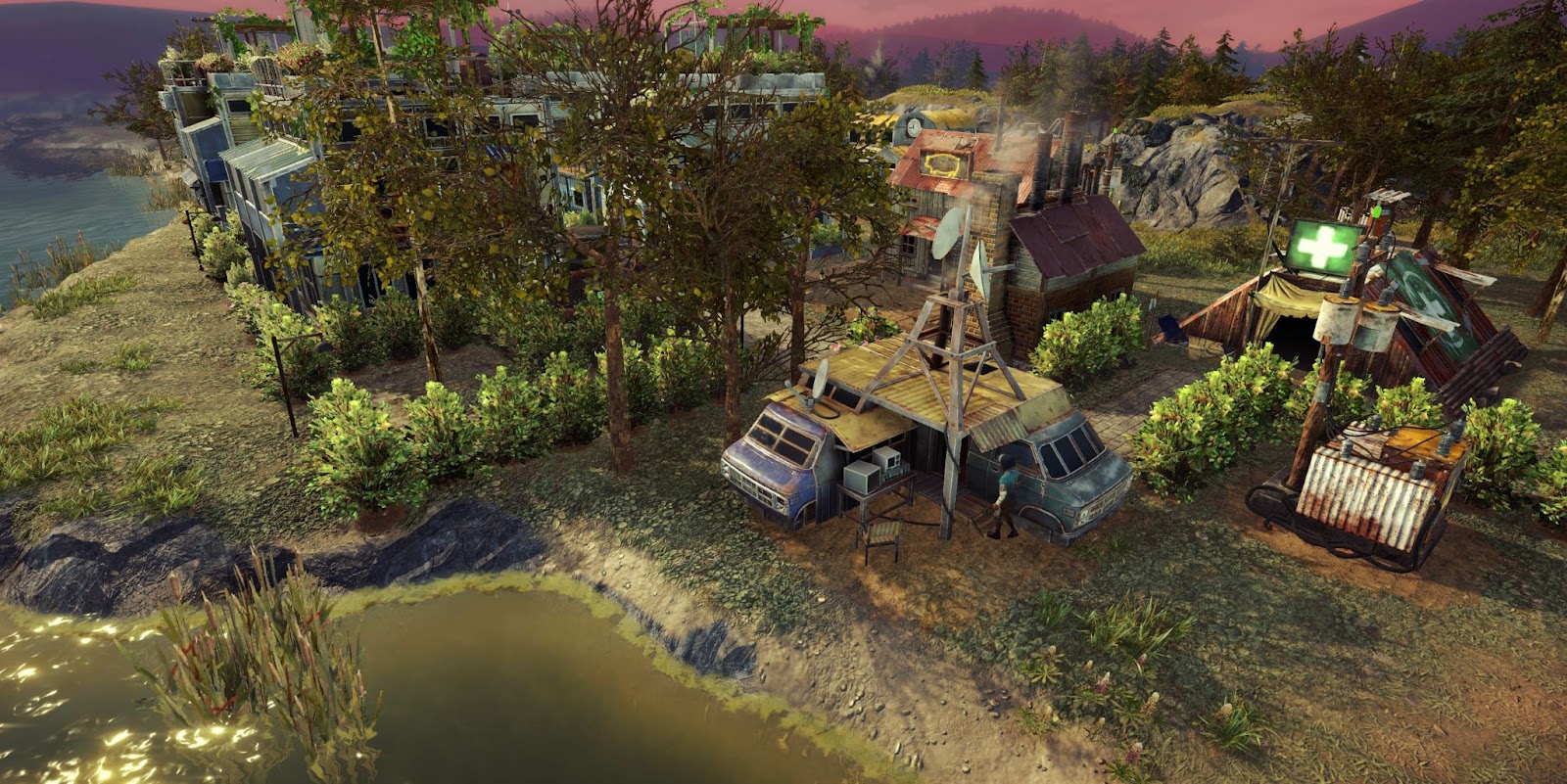 IMAGE: Anti-covert mission buildings​
But be on your guard as these covert missions can also be used against you. Both your Rival and other societies can infiltrate your colony to steal, disrupt your research or even set off explosives! To combat this, unlock protective buildings like anti-propaganda towers and surveillance vans from the new tech branch and have them staffed at all times. The more workers you have stationed, the greater the chance you’ll prevent anything bad from happening and maybe even uncover the culprit in the process. 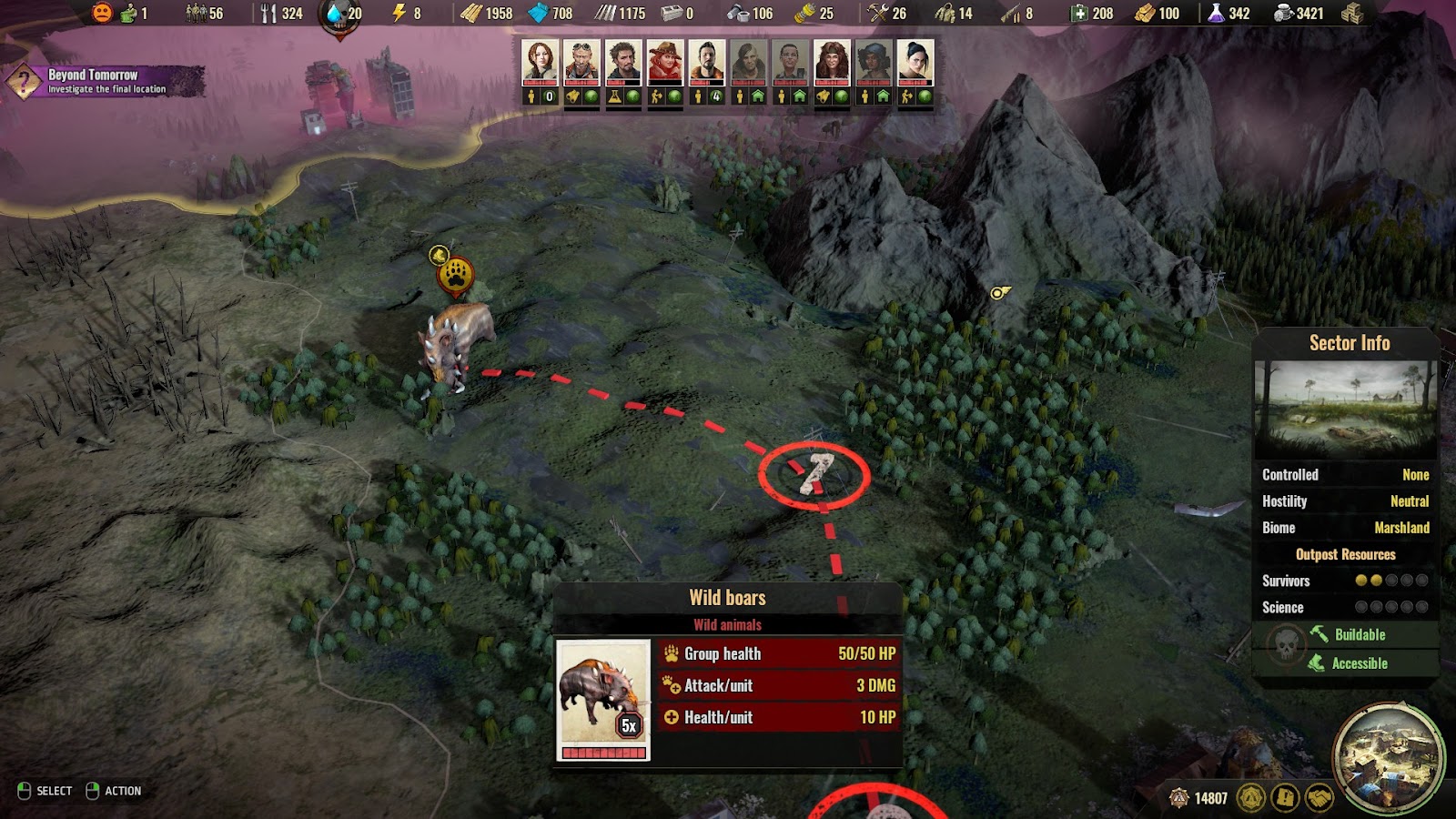 IMAGE: Roaming animal​
The world map is also more active than ever before. You might spot a herd of deer roaming around looking for food or a group of bandits searching for prey. Hostile units might chase your specialists who are moving on foot or decide to take over your world map outpost, halting its operations until you clear them out. For best protection, have a fleet of capable vehicles on hand at all times, as the bandit hordes are unable to catch a fast-moving car with all your scavenged loot inside. As the game progresses, you’ll start seeing more powerful Rival troops on the world map. Approach them with caution (and several specialists).

The base game is also receiving an update with a number of quality-of-life improvements, user interface additions and bug fixes. Most notably the main quest now has mid-quest rewards, permanent effects are now visible in the Statistics screen so you can see which affect your colony, and a toggle for faster world map animations has been added to the Settings menu. Check all improvements and fixes from the Changelog: Update 4 link below.

IMAGE: Colony beauty shot​
We hope you’ll jump in and discover all that the New Alliances DLC has to offer in terms of new buildings, tactics and decisions. There’s a lot to play around with from deciding who to help and who to hinder, and which powerful rewards to go for. So prepare yourself against bandits, rivals and sandworms alike to unite the wasteland!

As we’ve mentioned before, New Alliances will be released for PC platforms first while we continue working on the console counterparts, so stay tuned!

Surviving the Aftermath: New Alliances is available now on Steam and Epic Store. It is also included as a part of the Ultimate Colony Upgrade with more DLC to come later.

Is there a ballpark timeline for when the DLC will be available for console? Looking forward to trying out all these new features!
Reactions:
K

jasonian said:
Is there a ballpark timeline for when the DLC will be available for console? Looking forward to trying out all these new features!
Click to expand...

So there is no way to permanently pacify an area on the world map to get rid of bandit patrols in the area? (destroying bandit hives or something like that?)
Toggle signature
“And all those exclamation marks, you notice? Five? A sure sign of someone who wears his underpants on his head.”
J

Awesome. Thanks for the update.

I have a question: is the update save-game compatible? :3
Love all what I see, really really love it! Keep up the good work!
Toggle signature
[REDACTED], [REDACTED], [DATA EXPUNGED].

Don't know if you guys still take suggestions, doubly so as you passed 1.0, but a long time ago, I played a game of which one of the many features was to build a turret tower. Could mow down a lot of zombies. The game was Rebuild 3 in case anyone asked. Bet the Guardposts could be upgraded to this, have a gunner in the shack.

Other than that, looking forward to trying the update!
Reactions:
K

jose2534 said:
I have a question: is the update save-game compatible? :3
Love all what I see, really really love it! Keep up the good work!
Click to expand...

Sorry for the inconvenience.

Borgratz said:
So there is no way to permanently pacify an area on the world map to get rid of bandit patrols in the area? (destroying bandit hives or something like that?)
Click to expand...

Eliminating bandit camps (the ones in the middle of the large red sectors) reduces the likelihood of roaming bandits but does not completely eliminate them. In addition to razing the camps, using vehicles will greatly reduce your unwanted encounters with these patrols.
Reactions:

Sorry for the inconvenience.

Oh please, it's not an inconvenience at all, it was to be expected
Well, this means I will just need to start a new game let's do this >:3
Toggle signature
[REDACTED], [REDACTED], [DATA EXPUNGED].

Does this imply the switch won't be seeing the update or that it'll be coming later than that?

This game has quickly become one of my favorite city builders and I'm looking forward to see where it goes from here.

I did notice I can get requests to build buildings that I haven't researched the tech for yet, but I assume that's part of the challenge. But I am wondering if the request system is going to offer me impossible requests at some point.

I did notice I can get requests to build buildings that I haven't researched the tech for yet, but I assume that's part of the challenge. But I am wondering if the request system is going to offer me impossible requests at some point.
Click to expand...

Societies should stop sending any build requests after they're capped. If this still happens, do let us know. Some requests will be very difficult to fulfil by design as societies don't really "care" how you're doing, they just need stuff done. So them asking for a hospital when you're nowhere near researching or dealing with bandits without good fighters it is a possibility. The requests shouldn't, however, be totally 100% impossible like the example above.
Show hidden low quality content
You must log in or register to reply here.
Share:
Facebook Twitter Reddit Tumblr WhatsApp Share Link
Top Bottom