Menu
Install the app
You are using an out of date browser. It may not display this or other websites correctly.
You should upgrade or use an alternative browser.
Stellaris 43504 Bug Reports 23470 Suggestions 13520 Tech Support 2233 Multiplayer 335 User Mods 4174 Stellaris AAR (After Action Reports) Console edition 977
Previous Dev Diary Next Dev Diary
Show only dev responses

Hello everyone and welcome to another Stellaris development diary. Today's dev diary is the last dev diary for the 1.8 'Čapek' update, and will be going over the introduction of Awakened Empire Decadence and some changes coming to the three Ascension Paths and Megastructures. Decadence is a free feature in the 1.8 update, while the Ascension Path and Megastructure changes require the Utopia expansion.

Awakened Empire Decadence
Awakened Empires were added to the game as a way of throwing a new challenge at the player in the late-game. They are intended to be formidable foes, and only the absolutely most powerful player empires are meant to be able to take them on alone. However, this could lead to an unintended game state where the Awakened Empire had conquered or subjugated all regular empires and effectively 'won', with the player being stuck as an AE subject until the end of time. In order to address this, we've added a new mechanic called Decadence for Awakened Empires. Decadence is effectively a meter, going from 0 to 100, that starts filling up for Awakened Empires once a certain amount of time has passed since awakening. The larger they are (both in terms of owned planets and subjugated empires), the faster it builds up. Decadence reduces Awakened Empire resource income and fleet power, and also increases the rebelliousness of their subjects, and has very large penalties at high levels of Decadence. What this means it that while an Awakened Empire might start very strong, and grow even stronger as they expand, that very expansion will eventually turn into decline, until they're weakened to the point where the rest of the galaxy can rebel and overthrow them - if you end up their subject, you just have to be patient, build up your forces, and wait for the right moment to take back your freedom. Awakened Empires have also been changed so that they prefer to subjugate other empires (though still taking some planets as well) to conquering them outright, so there should always be a collection of subjects chafing under the precursor yoke and biding their time. 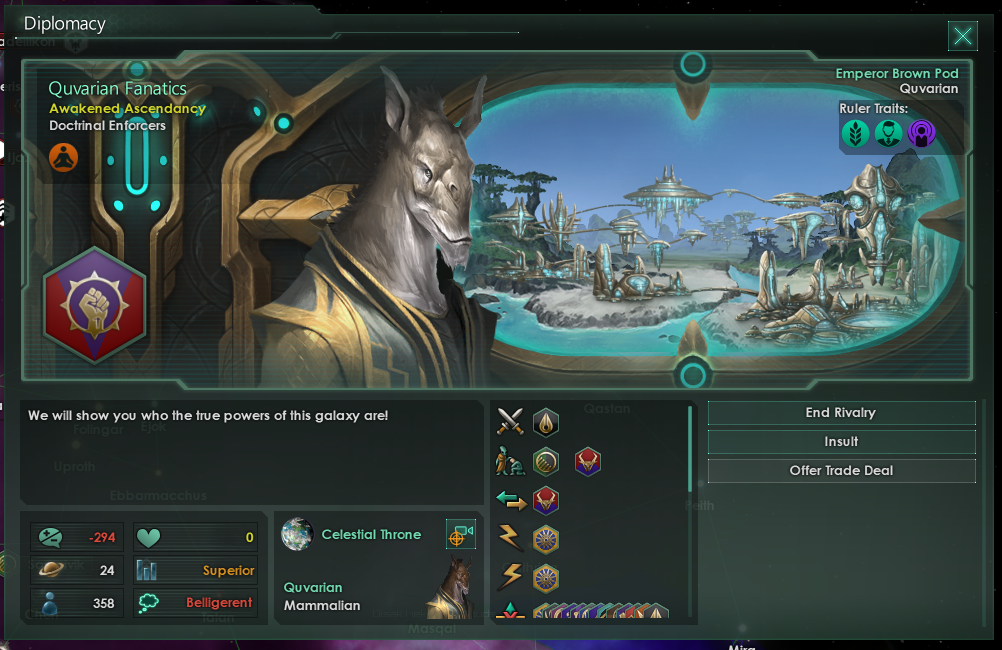 Ascension Path Changes
One of the most loved features in Utopia is the Ascension Paths - the ability to choose an 'end goal' for your empire and species in the form of Psionic, Synthetic or Biological Ascension. However, the decision to restrict the Psionic and Synthetic paths based on ethics was less popular, and though I think the reasoning for it is sound (making ethics more diverse), this is a case where I think there is a valid case to say that balance should take a step back in favor of letting the player decide the path or their own empire. For this reason, we've lifted the Spiritualist-only restriction on psionics and have opened up for Spiritualists to research robotics and synthetically ascend. We have also removed the Materialist-only restriction on AI Citizen Rights.

To compensate for this loss, Spiritualists have received a buff in the form of stronger Temples, and Materialists have been given a new living standard called 'Academic Privilege' that boosts happiness and research output at the cost of more consumer goods. However, though we've lifted the hard restriction, the impact of the ascension paths on ethics attraction and faction happiness remain. This means that, for example, a Spiritualist empire that decides to Synthetically Ascend will have significant troubles with unhappy factions and materialist ethics drift, and similarly, the pursuit of Psionics will cause increased Spiritualist attraction and the likely creation of a strong Spiritualist faction.

In addition to these more general changes, there's a few more path-specific changes and additions:
Psionic: Buffed traits and Psi Corps building, and added an alert to tell you when the Shroud is ready for use. Additionally, psionically awakening other species in your empire now happens more often.
Synthetic: Added the ability to assimilate new biological pops into synthetic bodies, and the addition of robomodding significantly buffs this path. Synthetic and Cyborg leader traits were nerfed a bit to compensate.
Biological: Increased the total trait points by 1, and reduced the cost of advanced traits such as Robust. 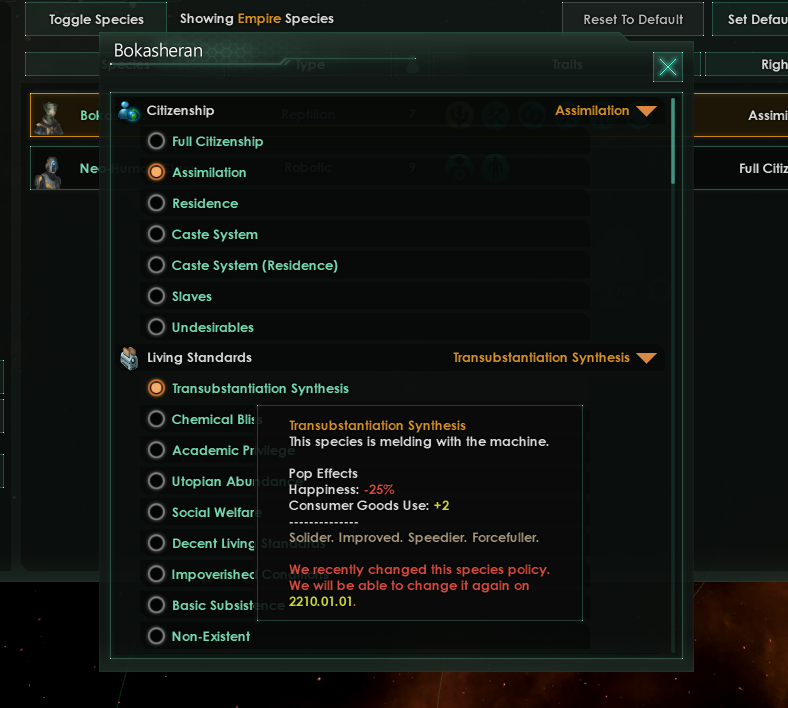 Megastructure Changes
The headline feature of Utopia was the Megastructures, massive constructions requiring tens of thousands of minerals and decades to construct. A frequent criticism we have received for the Megastructures is that they simply do not feel significant enough, with comments on how the Dyson Sphere should realistically be producing millions of energy, and so on. We've made some changes in 1.8 that we hope will address some of these complaints, though I want to preface this by saying that Megastructures are not and will never be 'realistic', nor is Stellaris meant to be a realistic game in the first place. However, they are meant to feel impressive and special, and when a handful of Habitats with solar power processors can match a Dyson Sphere in output, that impressiveness tends to fade, no matter whether it's actually balanced or not.

For this reason, we have decided to make a change to the Dyson Sphere and Science Nexus. Both of these Megastructures have been majorly buffed, with a finished Dyson Sphere now producing 1000 energy and a fully upgraded Science Nexus outputting a total of ~750 science. However, they have been changed so that each empire can now only build one of each, similar to the Sentry Array. This means that they can be very powerful without having to massively increase the build time or cost to prevent them from simply being spammed. Ringworlds have not been changed, and can be built in any number you want, indirectly buffing the effectiveness of the Circle of Life perk.

Additionally, we've made a tweak to the Master Builders perk. This perk, when taken, will now give you the Mega-Engineering technology if you do not already have it, similar to how World Shaper gives Atmospheric Manipulation and Mastery of Nature gives blocker techs. This allows for reliable access to Mega-Engineering for empires that want to focus on Megastructure construction. 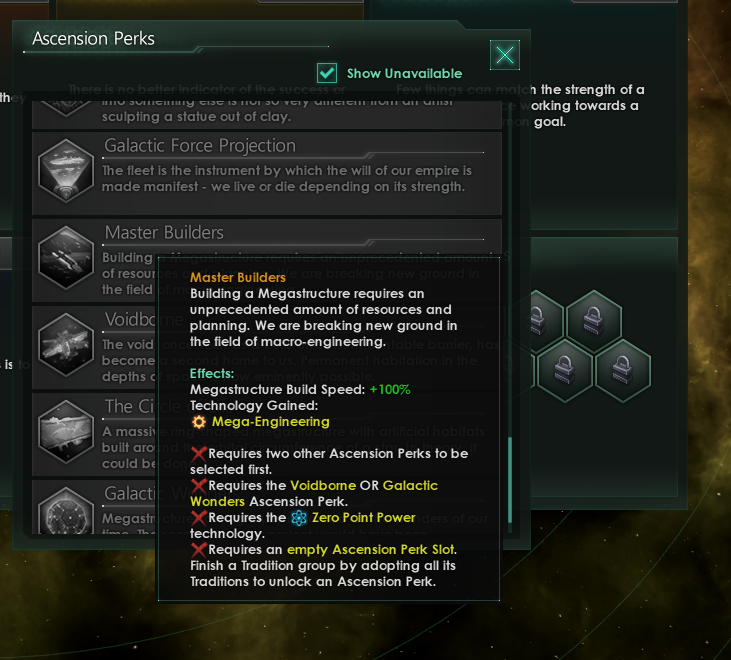 That's all for today! Next week we'll post the full patch notes for 1.8 and Synthetic Dawn. See you then!
Last edited: Sep 7, 2017

Wiz said:
added an alert to tell you when the Shroud is ready for use
Click to expand...

Any chance we could get this for enclave buffs as well?
Toggle signature
I sometimes stream achievement runs and stuff.

The Transubstantiation Synthesis is a temporary condition while the pops are cyborgified / assimilated?
Toggle signature
Member the -= Paradox Game Converters =- Team
Lead developer on: CK3 to EU4, CK2 to EU4, upcoming EU4 to Vic3, EU4 to Vic2, Responsible Blobbing, Responsible Warfare (Victoria II Clamp Mods for EU4)
See our other active converters: Vic2 To HoI4, Imp to CK3, older converters: CK2 To EU3, EU3 To Vic2, Vic2 To HoI3 and more!
Join our Discord, support us on Patreon, we always need more programmers!

I'm not sure I'm a fan of totally removing the restrictions on ascension, though I guess I will have to manage.

Wiz said:
That's all for today! Next week we'll post the full patch notes for 1.8 and Synthetic Dawn
Click to expand...

Hmmm, love me some patch notes. My printer will be on standby. Make it so Number One.

@Wiz Will there be a system implemented to multi-build buildings in this expansion, just like you multi-build robot pops ? If you have a lot of planets, it can become a chore because of the extra clicking. For instance I like to make a planet only for minerals or only for energy, then I would select the desired building and just plop it everywhere , not having to select the "build" button and then the building each and every time... It takes so long....

Wiz said:
That's all for today! Next week we'll post the full patch notes for 1.8 and Synthetic Dawn. See you then!
Click to expand...

Are you going to be adding any new achievements this patch well? If so, will we hear about them next week too?
Toggle signature
"It is well known that nothing is such thirsty work as the acquisition of knowledge."

Considering the softening of the Synthetic and Psionic ascension restrictions, do we also get an easier route to Biological ascension for egalitarian/f.egalitarian empires? While this isn't a hard cap per se, Targeted Gene Expressions has a 0.1x chance modifier if you go egalatarian, which is fairly low.

CheesySnake said:
Are you going to be adding any new achievements this patch well? If so, will we hear about them next week too?
Click to expand...

You can already check them on steam.

Zemurin said:
The Transubstantiation Synthesis is a temporary condition while the pops are cyborgified / assimilated?
Click to expand...

Are hive minds still locked to only one ascension path, because that's also pretty limiting?

I still don't know if you can get +2 Robot Parts and Machine Worlds ascensions as non-robot empires. :c

Yes, and there are no plans to change this. Removing one limitation does not mean we intend to remove every limitation.
Toggle signature
For every complex problem there is an answer that is clear, simple, and wrong.

And it's worth only -25 Happiness? That's a quarter from complete depression to absolute ecstasy.

"We are the Borg. Prepare to be assimilated."
"I'd rather not, but since I'm living in a really nice place and have plenty of food I can't get riled enough to resist. Okay, go ahead."
Toggle signature
Member the -= Paradox Game Converters =- Team
Lead developer on: CK3 to EU4, CK2 to EU4, upcoming EU4 to Vic3, EU4 to Vic2, Responsible Blobbing, Responsible Warfare (Victoria II Clamp Mods for EU4)
See our other active converters: Vic2 To HoI4, Imp to CK3, older converters: CK2 To EU3, EU3 To Vic2, Vic2 To HoI3 and more!
Join our Discord, support us on Patreon, we always need more programmers!

lilsaihah said:
I still don't know if you can get +2 Robot Parts and Machine Worlds as non-robot empires. :c
Click to expand...

You can not. They're only for Machine Empires.
Toggle signature
For every complex problem there is an answer that is clear, simple, and wrong.