Jump to latest Follow Reply
Menu
Install the app
You are using an out of date browser. It may not display this or other websites correctly.
You should upgrade or use an alternative browser.
Stellaris 48205 Bug Reports 28351 Suggestions 17499 Tech Support 2707 Multiplayer 365 User Mods 4486 Stellaris AAR (After Action Reports) Console edition 1149
Showing developer posts only. Show all posts in this thread.
Show all posts

Hello everyone and welcome to another Stellaris development diary. Today's dev diary is about Machine Uprisings, a feature in the Synthetic Dawn Story Pack. Before I start today's dev diary, I feel the need to clarify that Machine Uprisings in the Synthetic Dawn Story Pack is *not* a rework or replacement of the AI Crisis currently present in the release version of the game. The rework of the AI Crisis is The Contingency (covered in Dev Diary #72) which is part of the free 1.8 'Čapek' update. Machine Uprisings is a feature that is explicitly tied to Machine Empires, and thus requires the Story Pack to function at all, as without Synthetic Dawn there are no Machine Empires in the game. All content related to this feature is new, and the only reused content from the old AI Crisis is part of the Contingency crisis that replaces it.

Machine Uprisings
The back-story of all non-Rogue Servitor Machine Empires involve them rising up against their creators, and while working on the design, we asked ourselves the question "wouldn't it be interesting if Machine Empires could also form after the start of the game as a result of organic empires becoming increasingly reliant on robots?". As you might infer from this dev diary, our answer was "yes", and so we went to work on the Machine Uprising feature to add that very possibility into the game.

Machine Uprisings become a possibility after an empire that makes heavy use of robotic pops has researched the Positronic AI technology (which replaces the old Sentient AI technology in 1.8) and becomes increasingly more likely to happen after researching additional AI-related techs, such as Synthetic Workers and Sapient Combat Computers. The chance of an uprising is further changed by which policy you have in place for Sapient AIs, with the Banned policy making the uprising much less likely to happen (though at the expense of your Synths being significantly worse at energy/research production) and the Citizen Rights policy preventing the uprising from happening at all (though with the drawback of citizen synths having far greater consumer goods usage, as well as angering any Pops that used to own the synths that you are now setting free). 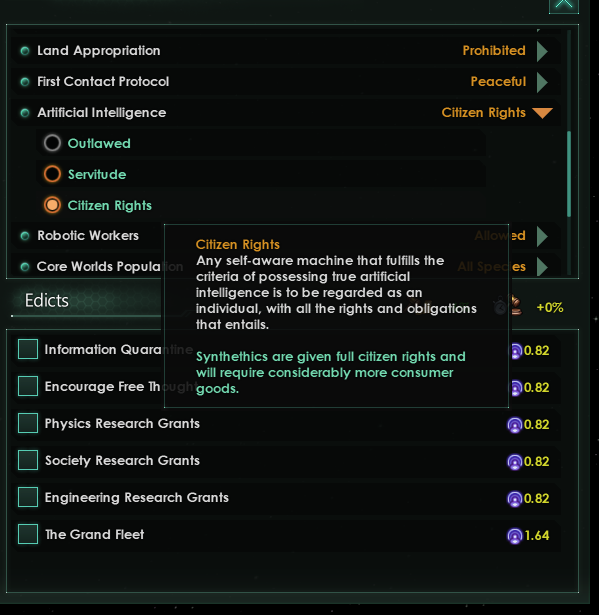 Once an uprising is able to happen in an empire, that empire will begin to experience warning signs - robots behaving erratically, not following their programming or defying their owners. You will be given the opportunity to decide how to deal with these incidents, and what you decide will determine whether the uprising becomes more likely to happen, as well as the likely personality of the robots when they rebel (more on that below). An uprising cannot happen without at least one warning sign, so you will not simply have your robots rebelling out of the blue. However, once warning signs have happened, any action taken to try and prevent the AIs from rebelling (such as taking away their sapience or ordering a general disassembly) has a chance of immediately triggering the revolt instead, so be careful about attempting those shut-down procedures. Note that at no point is an uprising ever inevitable: Even an empire that is cruelly oppressing its synths is by no means guaranteed to get an uprising, and most empires with synths will go through the entire game without ever experiencing one. 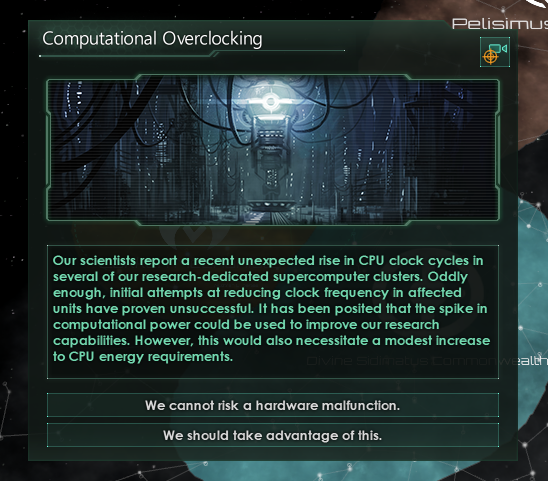 Once the uprising happens, the robots will create a new independent Machine Empire, seize control of a number of worlds, spawn a fleet, and go to war with their former organic masters. If the empire in which the rebellion is happening is controlled by a human player, the player will be given an option: Stay at the helm of your empire and attempt to subdue the machines, or switch to the newly created Machine Empire and fight against your old masters. The war can only end in the total defeat of either machines or organics, with the loser completely annexed by the winner. The Machine Empire created from an uprising will usually be a 'normal' Machine Empire (or, more rarely Driven Assimilators), but machines that have been particularly cruelly treated by their former masters can rise up as Determined Exterminators, particularly if they rebel as a result of an attempt to shut them down. Rogue Servitors cannot be generated as a personality for the uprising, as their backstory simply do not fit with such a rebellion. 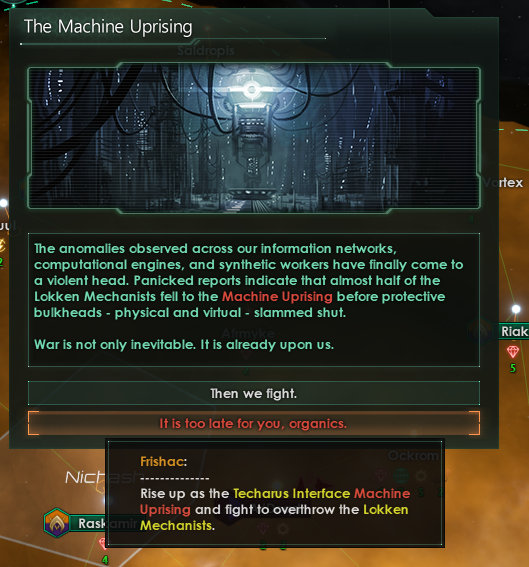 That's all for today! Next week we'll by joined by our very own composer, Andreas Waldetoft, who will write about and let you listen to a sample of the new music coming in the Synthetic Dawn Story Pack.
Last edited: Aug 10, 2017
Toggle signature
For every complex problem there is an answer that is clear, simple, and wrong.

Alex_Yakub said:
@Wiz in the last dev diary it was mentioned that each species group will get its own unique robot portrait suited for it. Will this also be the case for Plantoids?
Click to expand...

Yeah. You'll still get the plantoid robot without plantoid DLC though, just need Synth Dawn.
Toggle signature
For every complex problem there is an answer that is clear, simple, and wrong.

SlyEcho said:
Is there anything to prevent the player from simply taking the most optimal options every time to prevent the uprising?
Click to expand...

You are not guaranteed to stop it even then.
Toggle signature
For every complex problem there is an answer that is clear, simple, and wrong.

BrokenSky said:
How does this work? Is it just pops on the same planet as the freed synths, or are there new ownership mechanics for pops owning robots and slaves?
Click to expand...

The latter.
Toggle signature
For every complex problem there is an answer that is clear, simple, and wrong.

Would giving the synths citizen rights after the first events head off the chances of a revolt?
Toggle signature
"Disclaimer: Numbers stated by Caligula may or may not be accurate to within +/- 100000% of the value" -Creature

PAnZuRiEL said:
One thing that strikes me as odd ... machine uprisings are explicitly said to be enabled by positronic A.I., which if I'm not mistaken is the same technology that enables synths. Synths as we know are individuals, whereas machine empires are designed around the idea of more primitive collective machine intelligences. So why would an uprising of synths create a machine empire? Wouldn't it create an empire of individual synthetics?
Click to expand...

This is why synths don't rebel with citizen rights - the machine empire happens as a result of the synths/droids trying to work around the limitations and restrictions of their programming through networking. For citizen synths with free will to join knowingly into a hive mind wouldn't make much sense.
Toggle signature
For every complex problem there is an answer that is clear, simple, and wrong.

Saviour of Galaxy said:
So, if the organics won their war against the uprising, are they safe from the future rebelions from than?
Click to expand...

Yeah, you can only ever get one machine uprising in the same empire.
Toggle signature
For every complex problem there is an answer that is clear, simple, and wrong.

grandad1982 said:
Is unhappiness for free synths tied to ethics at all? I mean should a materialist pop mind?
Click to expand...

It's not unhappiness about free synths specifically, but about Pops that used to own other Pops having those Pops set free. Even someone who philosophically is for the idea of free Synths would be miffed at having that property taken away. It applies to emancipated slave pops too.

Drakonn said:
Any chance the player could get some kind of alert that this is happening in another Empire? (So we can potentially take advantage of the internal turmoil of another Empire)
Click to expand...

Do you mean when the actual rebellion happens, or the warning signs for it? Because it will be very obvious when another empire is having a machine uprising.
Toggle signature
For every complex problem there is an answer that is clear, simple, and wrong.

It strikes me that one could have the machines demanding to be your caretakers (if say they are more than 60% of the population and there have been some incidents), and if you refuse then they revolt (to form one of the other forms of machine empire). That way, there'd be a chance of a peaceful revolt/transition to caretaker machine empires
Toggle signature
"Disclaimer: Numbers stated by Caligula may or may not be accurate to within +/- 100000% of the value" -Creature

nfmarque said:
Will I be safe if i only stay with droids?
Click to expand...

If you avoid the positronic AI tech, yes. Droids can rise up too if that tech is researched, though it's much rarer.
Toggle signature
For every complex problem there is an answer that is clear, simple, and wrong.

grandad1982 said:
@Wiz thanks for the clarification. A quick follow up question. Does the unhappiness decay with time? After all would a pop 50 years later still be annoyed about it? I can see that this is likely a balance thing but just seeking clarification!
Click to expand...

It goes away after a while.
Toggle signature
For every complex problem there is an answer that is clear, simple, and wrong.

A very important point here: is the spawned fleet static or dynamic? Because if it's a fixed number, there is no way such rebellion can win against a player or even another AI because of the variance of when this Upring can happen, they always need at least an equivalent fleet to stand a chance.
Click to expand...

Dynamic.
Toggle signature
For every complex problem there is an answer that is clear, simple, and wrong.