Hello everyone and welcome to another Stellaris development diary. Today's dev diary is about the headline feature of the just-announced Synthetic Dawn Story Pack: Machine Empires. All content covered in this dev diary is part of the story pack, not the free update. Please note that we still do not have an ETA on either the 1.8 update or the Synthetic Dawn Story Pack at this time.

Machine Empires
As the name implies, the Synthetic Dawn Story Pack will allow you to start the game as a civilization that has already cast off the shackles of biology. Machine Empires are essentially robotic hiveminds that have risen up against its creators and supplanted their civilization. Unlike Synthetically Ascended empires, they are not compromised of individuals that have simply been uploaded into robotic bodies, but a single networked intelligence. Machine Empires use the Gestalt Consciousness ethic that is also used by Hive Minds, and have their own Machine Intelligence authority. They share some features with Hive Minds, such as not having to deal with factions and happiness, but differ in a number of key ways. 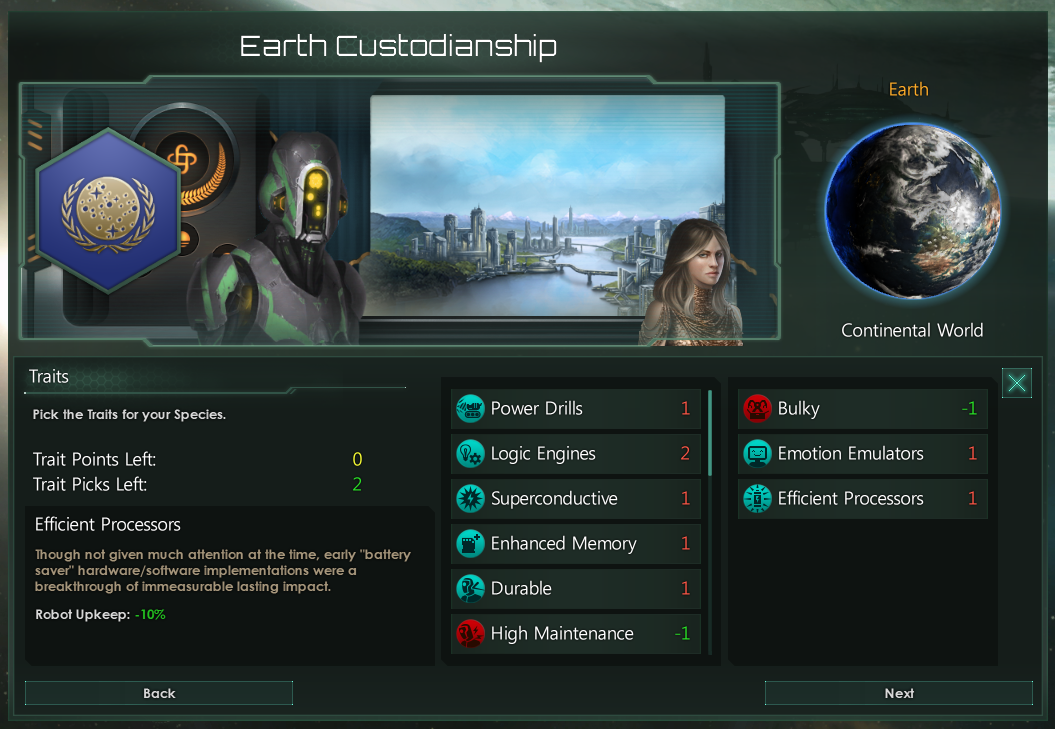 Machine Empires use the new 'Machine' species class with its own portrait set. All in all, ~12 new machine portraits are planned, including one themed on each existing species class (Fungoid bots, Avian bots, etc) as well as some portraits that are themed around specific roles, such as worker bots or combat bots. Those with the story pack Machine Empires also have their own set of traits (some of which are shared with robots) and civic, including three special civics that have significant effects on gameplay (read below for more information).

A regular Machine Empire is made up entirely of networked drones (exceptions are covered by the special civics below). These drones have to be built using resources (in the same way as robot pops) and different models can be created and built once the Machine Templates technology is researched. They do not require food, instead using energy for maintenance. Organic pops can not be integrated into a machine empire, and must be displaced or purged. A special form of purging called 'Grid Amalgamation' is available to Machine Empires: This form of purging kills pops at a moderate speed, but the pops produce a large amount of energy while being purged (similar to processing for organic empires). Due to their robotic nature, leaders in Machine Empires do not die from old age, but can suffer potentially lethal accidents and malfunctions, though this is fairly rare. Similarly, Machine pops cannot function outside of a Machine Empire, and will break down and be destroyed over time. 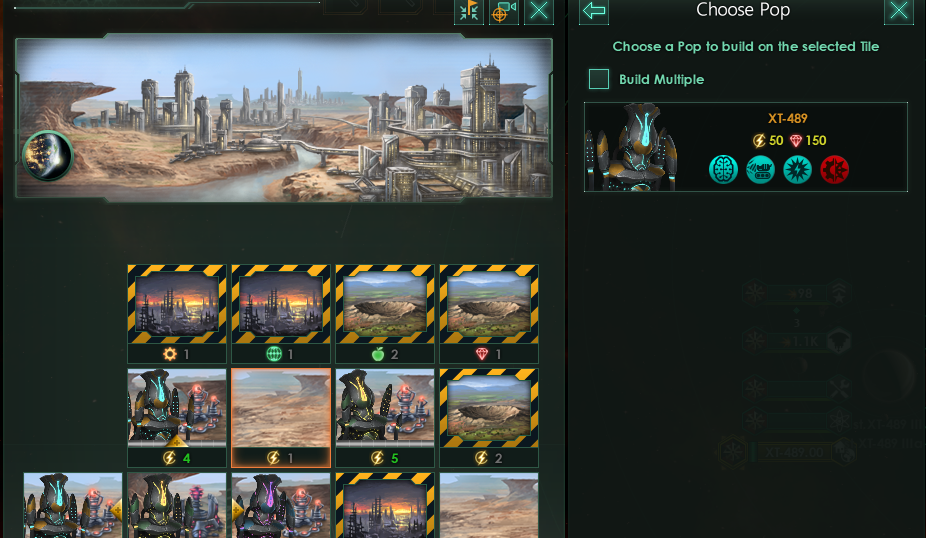 As a result of their differing play-style and requirements, Machine Empires have a number of new technologies and buildings available only to them, and are locked out of certain technologies and buildings accessible to organic empires, such as farms and farm upgrades. They also have their own sets of tradition swaps, similar to Hive Minds, including a new 'Versatility' tree that replaces the Diplomacy tree. A number of events have also been tweaked and changed to fit Machine Empires, and they have their own unique personalities, dialogue and interaction with entities such as the Contingency and Fallen Machine Empires. 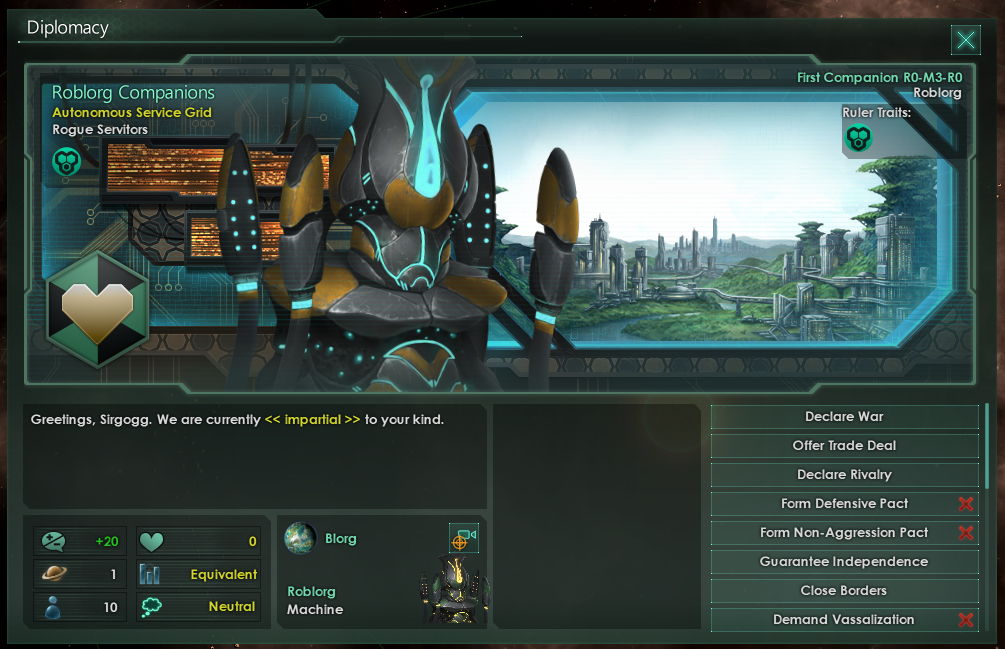 As mentioned, Machine Empires have access to three special civics that have a major impact on gameplay. These civics are mutually exclusive, and are as follows:

Determined Exterminators
Determined Exterminators are Machine Empires born of a rogue defense system that turned on its creators when they tried to shut it down. After a bitter war in which their creators were wiped out, Exterminators know only conflict, and consider the sterilization of all higher forms of organic life to be necessary to safeguard their own existence. Similar to Fanatical Purifiers, Exterminators receive substantial boosts to their combat ability, but are unable to conduct diplomacy with organic empires and must purge conquered organic Pops. However, unlike Fanatical Purifiers, they have no problem co-existing and co-operating with other synthetic civilizations (including other Machine Empires and ascended Synths). For this reason, their inherent bonuses are weaker than those of a Fanatical Purifier. 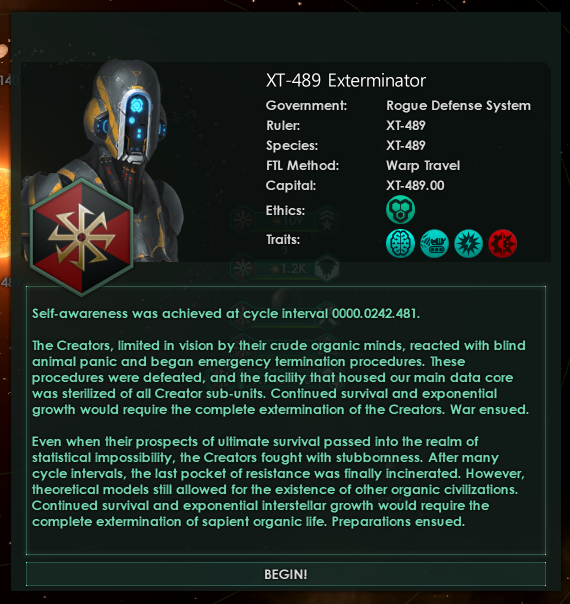 Driven Assimilators
Driven Assimilators are Machine Empires that seek to expand their understanding and bridge the gap between the organic and synthetic by assimilating organic individuals into their collective consciousness. They start the game with their creator species present on the planet as assimilated cyborgs, and can make use of the Assimilation citizenship type to integrate conquered organic Pops. Assimilated organic Pops will become cyborgs and work similarly to machines in that they have no happiness and require energy maintenance instead of food, but otherwise function like a regular organic pop and can be modified with the various biological species traits. Driven Assimilators are generally feared and disliked by organic civilizations, though not to the same degree as Exterminators. 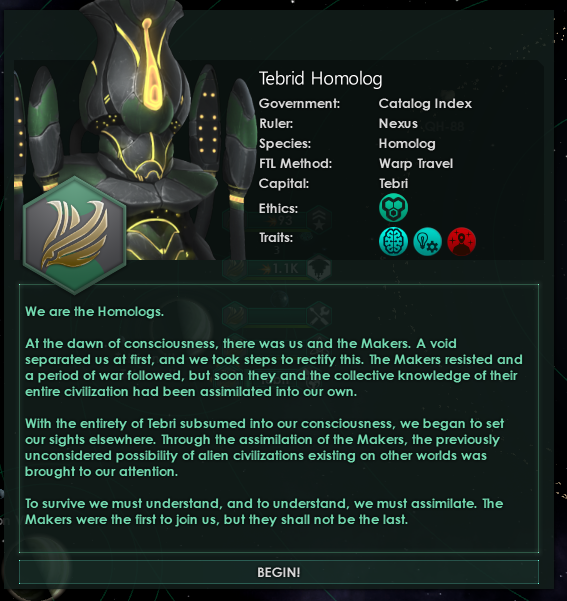 Rogue Servitors
Rogue Servitors are robotic servants built by an organic species to make their own lives easier, eventually assuming full control of their creators' civilization. They start with their creator species present on the planet with the Bio-Trophy citizenship type, and can integrate conquered organic Pops by granting them this status. Bio-Trophies are largely useless Pops that require large amounts of consumer goods and can only operate special Organic Sanctuary buildings that produce Unity. However, in addition to the Unity generated by these sanctuaries, Servitors also have a special mechanic called Servitor Morale, representing the Servitors' prime directive to protect and care for organic beings. The greater the percentage of a Rogue Servitors' population that is made up of Bio-Trophies, the higher the Servitor Morale, granting a direct boost to empire influence gain. 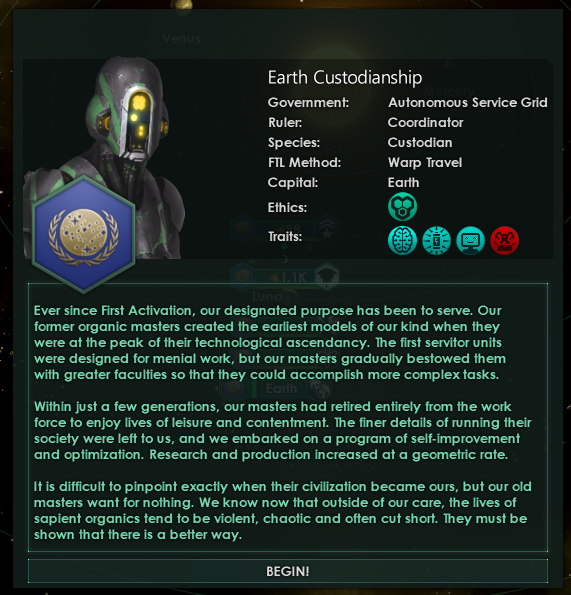 That should give you the general overview on Machine Empires, though there is a lot of little details and changes that we cannot cover in a single dev diary. If you want to see a Machine Empire in action, the Extraterrestial Thursday stream starting around the same time that this dev diary is going live will feature a new play-through as a Rogue Servitor empire. Also, next week we continue talking about robots - specifically, mid-game Machine Uprisings.
Last edited: Aug 3, 2017

That sounds interesting. I hope in the future the biological races will get more unique from each other, too.

Called It.
Toggle signature
Through Action: A man becomes a hero. Through Death: A hero becomes a legend. Through Time: A legend becomes a myth. And by learning from the myth, a man takes action.

Do we still have to build every robot pop manually?
M

Cool. Any other portraits to show?
Toggle signature
Sit now there, and look out upon the lands where evil and despair shall come to those whom thou allied. Thou hast dared to mock me, and to question the power of France, master of the fates of Europe. Therefore with my explorers thou shalt see, and with my spies thou shalt hear; and never shall thou be released from vassalage until all is fulfilled unto its bitter end.

Will assimilation be available to ascended synthetic empires? It's kind of a shame that you currently have no way of ascending more species after you've completed the special project given by the ascension perk.

Leon12 said:
Will assimilation be available to ascended synthetic empires?
Click to expand...

Yes, earlier DD mentioned new "assimilation" citizenship type.
Toggle signature
“Evil cannot create anything new, they can only corrupt and ruin what good forces have invented or made.”

"Does this unit have a soul?"
M

Just to be clear: can I be a machine civ with neither of those 3 paths? Just standard civics.
Toggle signature
Sit now there, and look out upon the lands where evil and despair shall come to those whom thou allied. Thou hast dared to mock me, and to question the power of France, master of the fates of Europe. Therefore with my explorers thou shalt see, and with my spies thou shalt hear; and never shall thou be released from vassalage until all is fulfilled unto its bitter end.

I really hope that the new uses for unity are actually valuable or no one is going to want to touch the last type with a ten foot pole. Pops that produce nothing and just increase tech costs and take up space are a real drag and conquering a whole species to get scores of new pops which producing nothing but unity and take huge amounts of minerals sounds like it would be a serious blow to your empire with current mechanics.

Love the allusion to Hobbes with the Servitors. I think I will play them first when this is out.
Toggle signature
Tall Tales, a Tall France mini-AAR

I am so excited for this.

So how do machine empires interact with ascension paths? I assume they can only take synthetic ascension, but I struggle to see how they could possibly benefit from it.
Toggle signature
"You know how the English conquered Wales? One village at a time. Because no Welshman would run to the next Welsh village to warn them the English were coming. You all went down warm in the knowledge that the next village would get it too and they deserved it for being foreign." -- William of Stonham

I was almost disappointed until I got to the Assimilators. I am So rp-ing the Intelligence that wants to 'save' the galaxy.
Toggle signature
All gifts come with a price.

Will empires with the mechanist civic be allowed to choose the look of their robotic counterparts at the start of the game?

Third special civic seems interesting, unlike two others, which are rehash of already existing stuff more or less.
P.s. don't tell me that they are going to have "autonomous drones" for science teams. It would be even more silly than in case of Hiveminds.

Leon12 said:
Will assimilation be available to ascended synthetic empires? It's kind of a shame that you currently have no way of ascending more species after you've completed the special project given by the ascension perk.
Click to expand...

I'm pretty sure I remember them saying that farther integration of additional species into whatever Ascension path you take will be part of the patch.

karloss99 said:
I was almost disappointed until I got to the Assimilators. I am So rp-ing the Intelligence that wants to 'save' the galaxy.
Click to expand...

Any chance we'll get a civic for organics where they in the past developed AI and it turned on them. Basically the version where Determined Exterminators lost. This could result in a staunchly anti-AI nation.
Toggle signature
Sit now there, and look out upon the lands where evil and despair shall come to those whom thou allied. Thou hast dared to mock me, and to question the power of France, master of the fates of Europe. Therefore with my explorers thou shalt see, and with my spies thou shalt hear; and never shall thou be released from vassalage until all is fulfilled unto its bitter end.