Jump to latest Follow Reply
Menu
Install the app
You are using an out of date browser. It may not display this or other websites correctly.
You should upgrade or use an alternative browser.
Stellaris 44618 Bug Reports 24362 Suggestions 14408 Tech Support 2358 Multiplayer 345 User Mods 4257 Stellaris AAR (After Action Reports) Console edition 1035
Previous dev diary Next dev diary
Show only dev responses

Hello everyone and welcome to another Stellaris dev diary. Today we'll be talking about some changes coming to robots in the 1.8 'Čapek' update, including the ability to modify Robotic pops. All changes mentioned in this dev diary are part of the free update.

Robomodding
In the 1.8 update, it will now be possible to create different 'models' of Robot, Droid and Synth pops through a system similar to genemodding. By researching the 'Machine Templates' engineering technology, you will get access to robomodding and a single robot trait point. More robot trait points can be gained through further engineering research. Using these points, you can create templates with different configurations of traits. Rather than using the basic biological traits, robotic Pops have their own set of traits, some of which are not available to the more basic robotic types. Once a template is created, it is immediately available to be used when building robotic Pops on a planet, and existing robotic Pops can be converted into that template through a special Robomodding project that uses Engineering research. 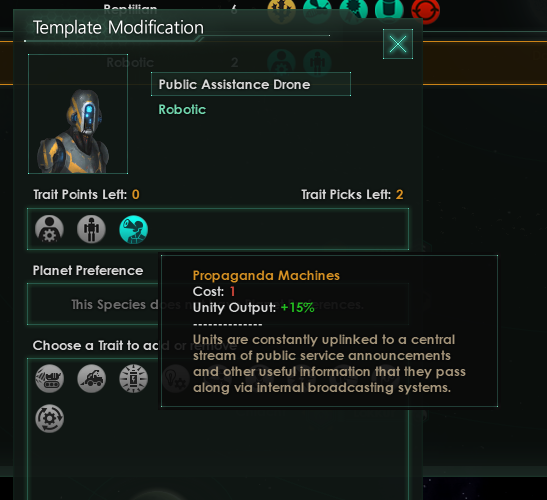 In addition to adding robomodding, we've also added support for switching Pop portraits into the genemodding and robomodding systems. If set to be permitted for a particular species class, that species class can have its portrait changed to any other portrait in the same species class as part of the template creation process. This system is also fully accessible to modders. But more on that in a later dev diary. 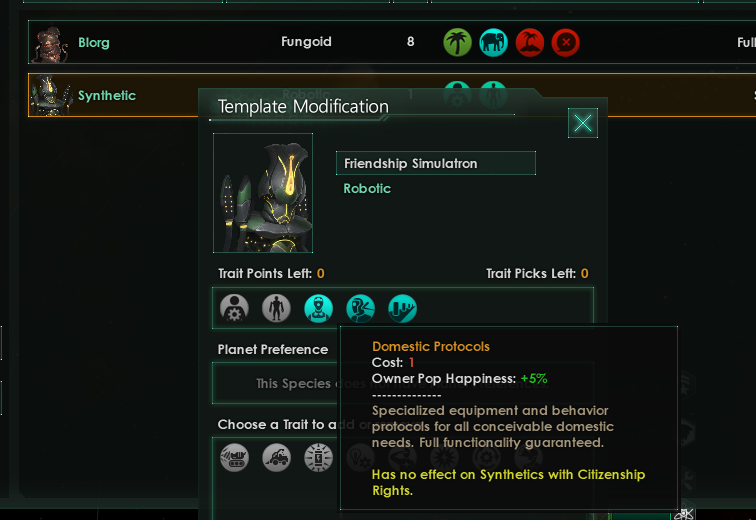 One final note: Since the addition of traits to robotic Pops will make them, and Synthethically Ascended empires, stronger overall, we're going to be doing a balance pass on them and possibly making changes and/or buffing the other ascension paths before 1.8 comes out.

Robot Building
We've also made some improvements to how you build robotic pops. Robotic pops are now built through their own 'Build Pop' interface in the planet view, which lets you select what robotic model you want to build and also has the option to start building several Pops at a time. If this option is checked, you will be able to build robotic Pops on any number of tiles with one simple click each, massively cutting down on the clicking needed to fill up a planet. Note that this is only a UI change, and does not in any way change the mechanics of how robotic Pops are built. 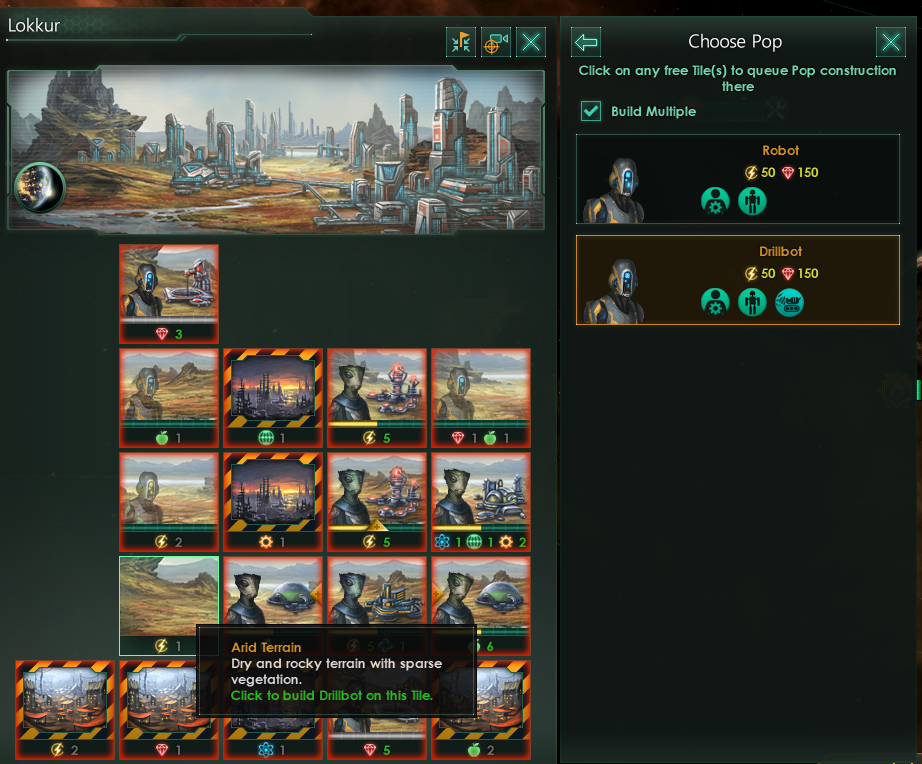 AI Policy & Techs
The way the AI policy works has always seemed inconsistent: Outlawing AI prevents you from building dumb robotic workers, but does not prevent researching Sapient AI or installing it on a spaceship. To address this issue and open up for more varied use of robots, we've changed the AI policy to be about sapience rather than about robots, and reworked some related technologies. The Sentient AI technology has been renamed Positronic AI, and is no longer a dangerous technology in itself (its effect has also been reduced to +5% rather than +10% research speed). The AI policy will not appear until this technology has been researched, as it's simply not relevant up to that point. Once it *does* appear, it has the following effects:
Outlawed: Sapient AI is outlawed. No effect on robots and droids. Prevents research and use of sapient combat computers. Synths can be researched and built, but have their sapience removed, removing their ability to feel happiness and essentially making them into slightly upgraded droids.
Servitude: Sapient AI is allowed, but Sapient AIs are considered property and have their free will restricted. No effect on robots and droids. Synths can be researched and built, but have slight penalties to energy and research production as a result of these restrictions. They also cannot join factions.
Citizen Rights: Sapient AIs are given full individual rights. No effect on robots and droids. Synths have citizen rights and can join factions, but some traits that depend on Synths being property (such as Domestic Protocols, which increases happiness for owner Pops) lose their effect and can no longer be added to new templates. 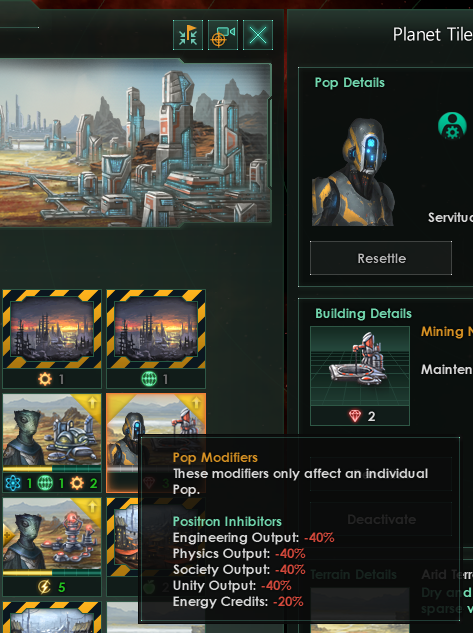 Manual Disassembly
Finally, since outlawing AI no longer purges robotic Pops, we've added back the option to manually disassemble them. This can be done to Robots, Droids and Synths without citizen rights, and works the exact same way as a regular 'extermination' purge, killing the Pop(s) off in a relatively short time. 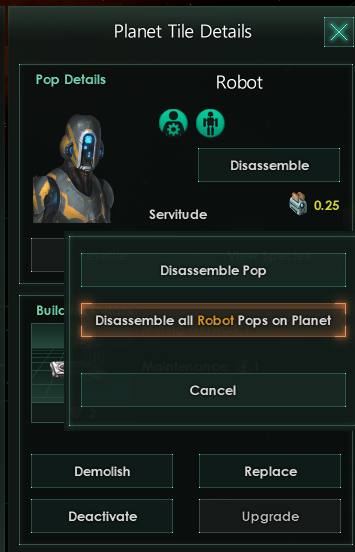 That's all for today! Next week we'll be talking about combat balance, ship components and the changes we're doing to put some clothes back on those naked corvettes.
Last edited: Jul 20, 2017

If I ever create an empire of genocidal thinking machines, that will be their name.

Will Spiritualists be able to make use of robots? or will that technology still be unavailable for research for Spiritualists? Will species who uploaded into Synths themselves be able to Robomod themselves? Also does this mean that we will be to build robots, Droids, and Synths all at the same time (As in a planet having robots, Droids and Synths)?
Toggle signature
Through Action: A man becomes a hero. Through Death: A hero becomes a legend. Through Time: A legend becomes a myth. And by learning from the myth, a man takes action.

Spartan878 said:
Will Spiritualists be able to make use of robots? or will that technology still be unavailable for research for Spiritualists?
Click to expand...

Looks like they will be able to use dumb robots(up to dumb synths).

Bursts in with STAND PROUD blaring in the background. YOOOOOOOOOOOOOO literally all of this!!!
F

Thank you for the update wiz!!!
Small question, will the 'bulk robot building' feature you mention, also be implemented for buildings?
One click for each tile that is

Spartan878 said:
Will Spiritualists be able to make use of robots? or will that technology still be unavailable for research for Spiritualists?
Click to expand...

Spiritualists will be able to use all kinds of robots. Their faction may still not be too keen on it, though (taking jobs from biologicals with true souls and all that).
Toggle signature
For every complex problem there is an answer that is clear, simple, and wrong.

Would Synths with AI Outlawed policy, be able to develop true sentience through events or effects of Contingency Crisis?

Fluxx said:
Thank you for the update wiz!!!
Small question, will the 'bulk robot building' feature you mention, also be implemented for buildings?
One click for each tile that is
Click to expand...

No plans for this at present.
Toggle signature
For every complex problem there is an answer that is clear, simple, and wrong.

Kessler said:
Would Synths with AI Outlawed policy, be able to develop true sentience through events or effects of Contingency Crisis?
Click to expand...

They will be less risky than intelligent ones, but not completely risk-free. More on that later.
Toggle signature
For every complex problem there is an answer that is clear, simple, and wrong.

I know what I would call my 'Propaganda Machines'. Adbots.

A thing that seems to be lacking is the option to have different robot categories. Some may want to have slave robots as well as citizen robots like it is possible for biological entities. Caste system would work great with specialized robots; Very intelligent robots as citizens and stupid strong robots as slave. Authoritarian materialist should be able to make that distinction.

Other than this small detail that seems a great addition

Good stuff, all good. Still personally I would like cost/maintenance increase for modified robots, that just makes more sense from common sense perspective.

This was mentioned again. What are "owner Pops"? All free pops on a planet? Or something was changed?

Paid DLC?
Toggle signature
All my posts are opinions. They are not facts. I am nothing more than a player of a game that I have purchased. Do not mistake my posts for a statement of facts. They are my honest opinion. Your opinion may vary.

Is there any possibility that Synths will become their own species pack (Like Plantoids, Avian, etc.) for the purposes of generating normal empires (player or AI)?

Shouldn't domestic protocols on synths with citizenship rights do something like charismatic, rather than nothing?
Toggle signature
"There is no such thing as an unbiased argument - indeed, facts support bias', or else they wouldn't exist." - Grand Historian

The very first paragraph in the OP:

Hello everyone and welcome to another Stellaris dev diary. Today we'll be talking about some changes coming to robots in the 1.8 'Čapek' update, including the ability to modify Robotic pops. All changes mentioned in this dev diary are part of the free update.
Click to expand...

Does the checkbox for multi-build need to be clicked on every time one wants to build robots or is the setting kept when one leaves the interface?
Toggle signature
Sit now there, and look out upon the lands where evil and despair shall come to those whom thou allied. Thou hast dared to mock me, and to question the power of France, master of the fates of Europe. Therefore with my explorers thou shalt see, and with my spies thou shalt hear; and never shall thou be released from vassalage until all is fulfilled unto its bitter end.

What happens to fully sapient synthetics if captured by a civilisation that has outlawed AI?
Toggle signature
"You know how the English conquered Wales? One village at a time. Because no Welshman would run to the next Welsh village to warn them the English were coming. You all went down warm in the knowledge that the next village would get it too and they deserved it for being foreign." -- William of Stonham
Show hidden low quality content
You must log in or register to reply here.
Share:
Facebook Twitter Reddit Tumblr WhatsApp Share Link
Top Bottom