Jump to latest Follow Reply
Menu
Install the app
You are using an out of date browser. It may not display this or other websites correctly.
You should upgrade or use an alternative browser.
Stellaris 46891 Bug Reports 27022 Suggestions 16439 Tech Support 2587 Multiplayer 358 User Mods 4419 Stellaris AAR (After Action Reports) Console edition 1124
Previous dev diary Next dev diary
Show only dev responses

Hello everyone and welcome to another Stellaris development diary. Today's dev diary is a highlight of a few things coming in 1.6 'Adams', a bug-fixing and quality of life-focused update that we are currently working on. We can't tell you the exact release date of Adams yet, only that it won't be a very long wait. Since it's not a major update, it's also not expected to break saves from 1.5 'Banks'. There will be no paid DLC accompanying Adams, so everything listed below is either free for everyone or only requires a previously released expansion. We wanted to make sure we had time for as much bugfixing and smaller quality of life tweaks as possible, so don't expect any major features to be part of this update!


Ruined Megastructures
One of the things we were hoping to have time for in 1.5 'Banks' that ended up being cut for time was having ruined and repairable megastructures in addition to the ones you can build. This will now be part of the Adams update instead. Once Adams is released, you will be able to find ruined versions of all the different types of megastructures in a variety of systems while exploring. Claiming these systems will allow you to repair these ruined megastructures and restore them to full functionality. Repairing a megastructure is cheaper and faster than building a brand new one, and also doesn't require any Ascension Perks, only the Mega-Enineering technology. Ruined ringworlds that existed previously (such as the Cybrex homeworld and the ones owned by the Keepers of Knowledge) are also able to be repaired, and will be able to be restored even for players that do not have the Utopia expansion. Utopia is however required to find and restore the Science Nexus, Dyson Sphere and Sentry Array.

Sector Taxes & Stockpiles
Another addition to Adams is a few more tools for managing your sectors' economy. As of 1.6 you will be able to set taxes for Energy and Minerals separately, and we've added a new 'Drain Stockpile' interaction that allows you to seize 75% of a sector's stockpiled resources at the cost of 100 influence. In the event that you are fighting in a defensive war, this cost goes down to 25 influence, allowing you to use rich sectors as a resource reserve for an unexpected war declaration. Finally, we've added the ability to feed your sectors 1000 resources at a time through CTRL-clicking.

New Room Backgrounds
While the code and content design team have been busy with fixes and improvements, the art time has not been idle either. As part of the Adams update, we've created 15 new room backgrounds themed around the various AI personalities. Randomly generated empires will use the background appropriate to their personality, adding flavor and allowing you to more easily tell the Slaving Despots from the Federation Builders at a glance. All 15 rooms are naturally also available when designing an empire, so if you really want your pacifist xenophile egalitarians to conduct diplomacy in a room surrounded by alien skulls, we have you covered! In addition to the player-usable rooms there are also 4 new rooms for the Fallen/Awakened Empires that are designed to suit their unique aesthetics. 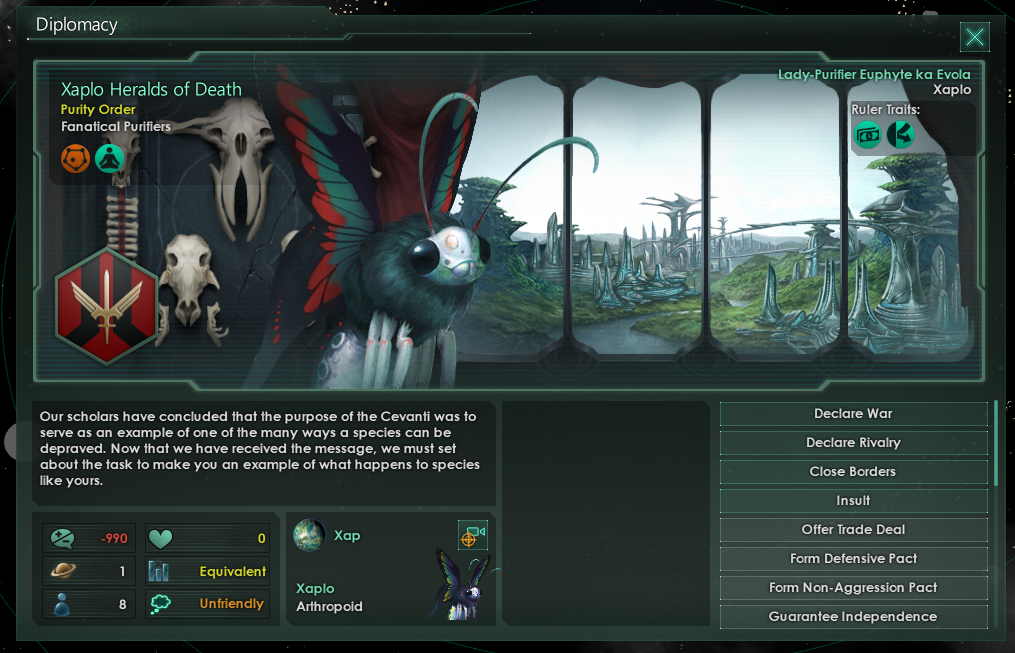 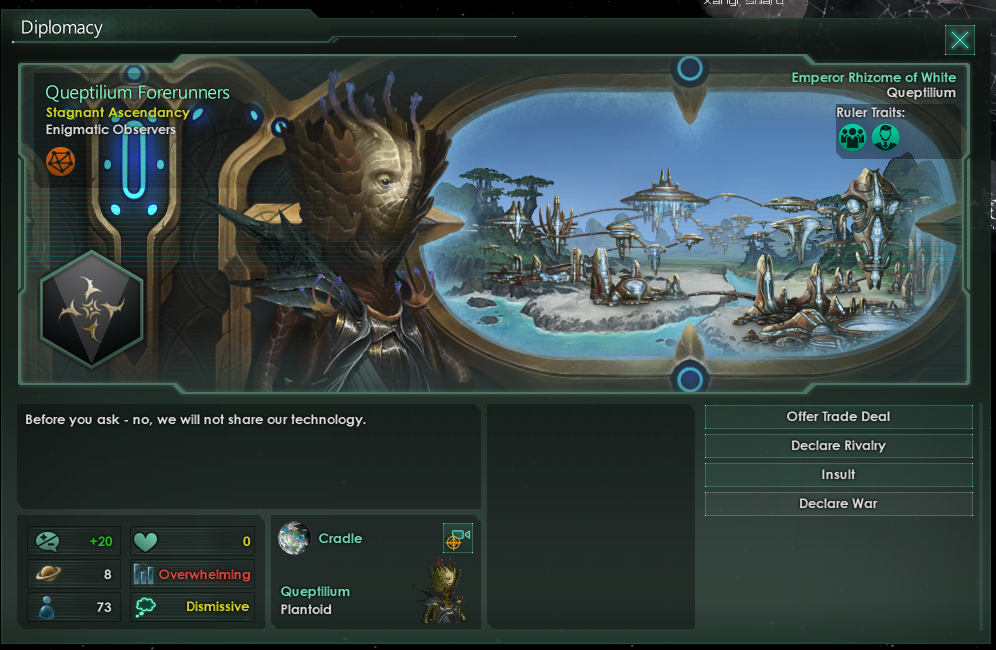 That's all for today! Next week we'll continue talking about the Adams update, so stay tuned.

No-o-o... Why is it just a summary of old teasers... Oh Lord Wiz, have you forsaken us?
Toggle signature
Potato.

Cool aditions, cant wait to play my next game in 1.6

and @Wiz Is there any plan in 1.6 to make useful the Unity when we complete the tradition trees?

At least a little function, hurts me when i see hundreds of Unity stored for nothing,some governors, civics and ethics converts into trash and the reconversion of the Unity buildings in wide empires is a pain in the ass.

A quick and temporary solution would be to let us use the unity to make edicts, with very expensive costs (1k or more) for the excesses of the late game.
Last edited: Apr 28, 2017

Do these new rooms totally replace the old rooms for their matching AI personality for random generated AI empires or are they added to the pool with a higher weight so that they are likely to be used but not solely?

Elimdur said:
Do these new rooms totally replace the old rooms for their matching AI personality for random generated AI empires or are they added to the pool with a higher weight so that they are likely to be used but not solely?
Click to expand...

Replace. Altered versions of the old rooms make up some of the new rooms.
Toggle signature
For every complex problem there is an answer that is clear, simple, and wrong.

What do we ( Paradox ) say to anything that's related to patch-stuff ( completions, fixes, optimisations and balancing ) ?: "Not today !"

I find this fixed cost a little worrying, as it almost forces the player to try to have only a single sector. Multiple sectors would just add unnecessary influence costs for draining resources...

I am so excited about this update. Maybe this sector drain mechanic will finally give me the edge to be Fanatic Purifiers on insane and actually win. In my last 2 playthroughs sadly I lost because the sectors couldnt contribute to my defensive war effort.

Wiz said:
Finally, we've added the ability to feed your sectors 1000 resources at a time through CTRL-clicking.
Click to expand...

That might just be the best thing in this Dev Diary !
Toggle signature
I've got a bad feeling about this....

Birnenpappe said:
I find this fixed cost a little worrying, as it almost forces the player to try to have only a single sector. Multiple sectors would just add unnecessary influence costs for draining resources...
Click to expand...

I disagree, its your own choice if you want multiple smaller sectors with stocked resource, provided you have the influence, or just one large sector. I like it.

@Wiz would it be possible to have separate buttons for mineral and energy drain from sectors? Just like taxes are separate now?

Very nice addition to the sector management. Thanks.

This is great news, a bugfixing update is what we need.

Hope that balance also includes a good look at unity/tradition gains, with more restrictions, so empires will have different traditions in different playthroughs (not all of them every time).

KopiG said:
I disagree, its your own choice if you want multiple smaller sectors with stocked resource, provided you have the influence, or just one large sector. I like it.
Click to expand...

It's bull**** since it's no choice since you get the max. amount of resources out of a single (big) sector.

What do we ( Paradox ) say to anything that's related to patch-stuff ( completions, fixes, optimisations and balancing ) ?: "Not today !"

Cool
Toggle signature
- We are the Blorg. We will link your Spacebook profiles to our own. You will be befriended. Resistance is impolite!

Good features, "old" teasers...I am enjoying 1.5.1 very much but I also NEED to know more of Adams. Maybe it is because Utopia´s last weeks teasers and dev diares were very "delicious" and full of contents. See you in twitch, @Wiz!
Toggle signature
If you also have issues with mods, check this thread: https://forum.paradoxplaza.com/forum/index.php?threads/mods-arent-loading-in-game.1270413/ FIXED with AndrewT's help (and some luck).​
M

Wiz said:
4 new rooms for the Fallen/Awakened Empires that are designed to suit their unique aesthetics.
Click to expand...

So far we've seen the same one over and over again, why not post another one?
Toggle signature
Sit now there, and look out upon the lands where evil and despair shall come to those whom thou allied. Thou hast dared to mock me, and to question the power of France, master of the fates of Europe. Therefore with my explorers thou shalt see, and with my spies thou shalt hear; and never shall thou be released from vassalage until all is fulfilled unto its bitter end.

Nice features, but they were already teased.